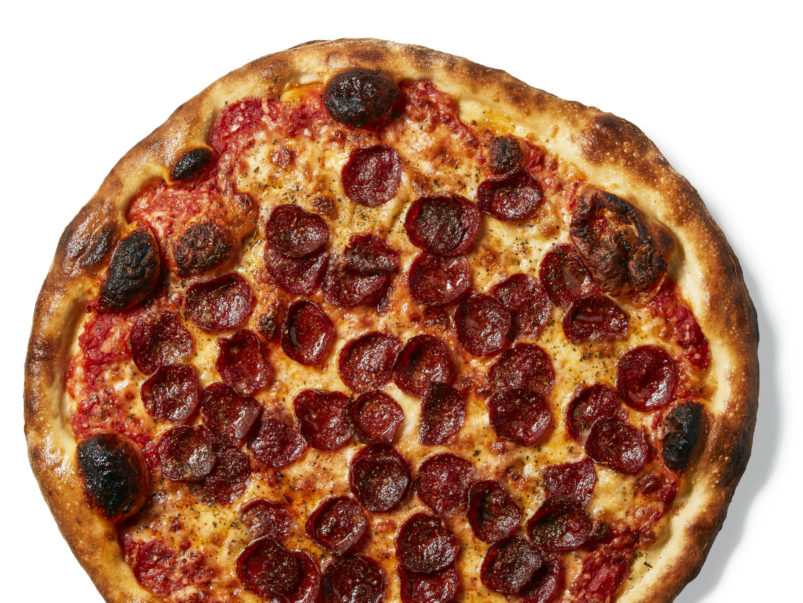 The new crop of plant-based pizzas are far from sad, cheeseless flat breads. Toronto restaurants are now making their own nut-based cheeses—from it-actually-stretches cashew mozzarella to faux feta so good it would fool a Greek grandmother. Not only are the imposter cheeses getting better and better, but restaurants are getting more creative with their meat substitutions, too. Aside from meat-flavoured soy products, there are now carrots masquerading as smoked salmon, jackfruit pretending to be pulled pork, and cauliflower chicken wings. Here are eight of the best vegan pies in town. 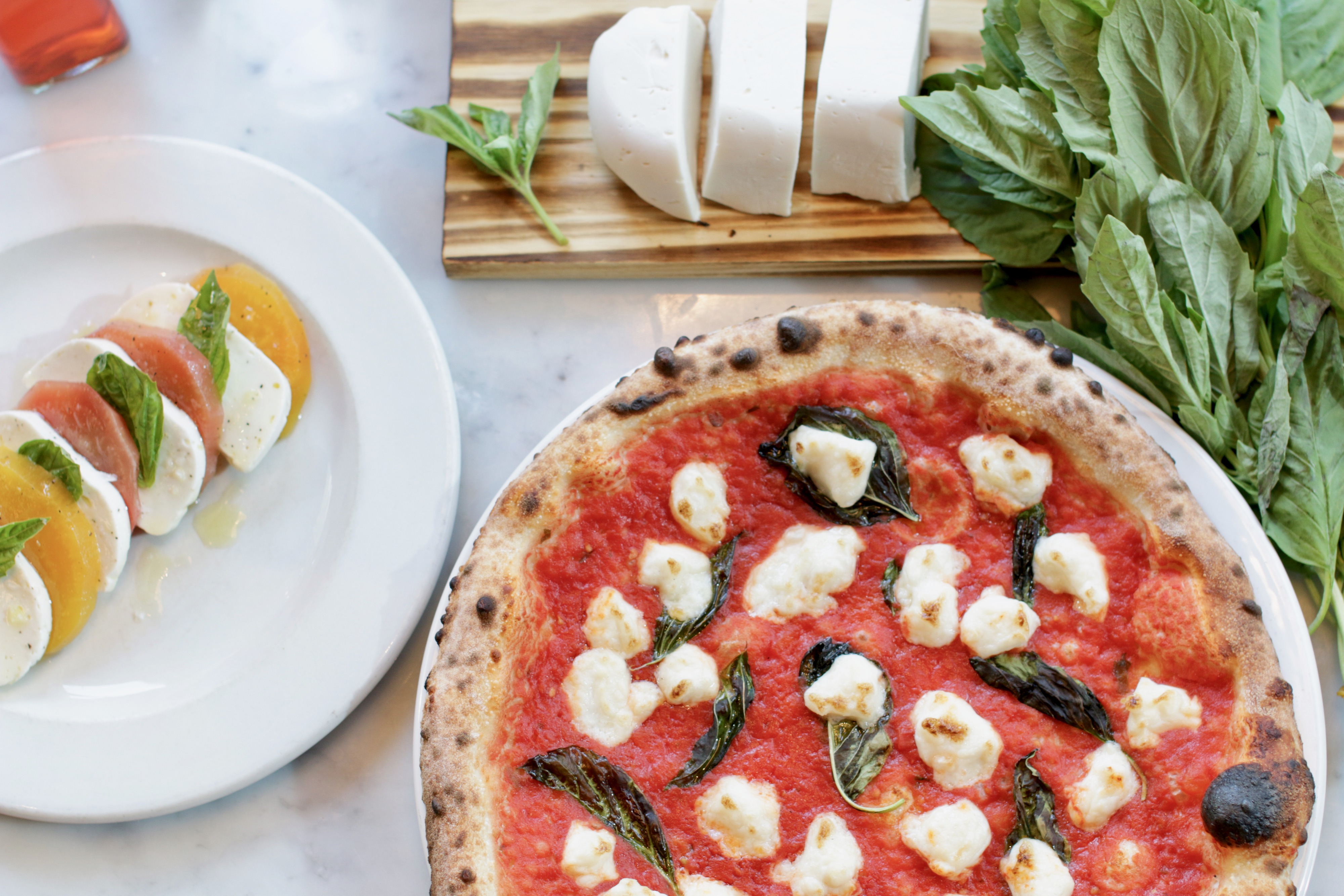 When it came to making their plant-based fior di latte pretender, chef Rocco Agostino refused to cut corners. He wanted Libretto’s dairy-free mozzarella to appeal equally to omnivores and their plant-powered pals. And, as he’s particularly allergy conscious, Libretto’s vegan cheese would need to be nut free, which meant they’d be experimenting with soybeans. The resulting cheese is a one-day process that combines soy with coconut oil, a secret natural stabilizer and time. The resulting cheese log just might be the best imposter in the city: it’s creamy, dense, salty, and—after 90 seconds in a wood-fired pizza oven—perfectly browned with a legitimate stringy pull. Even raw, it’s a damn fine knock off. $16. 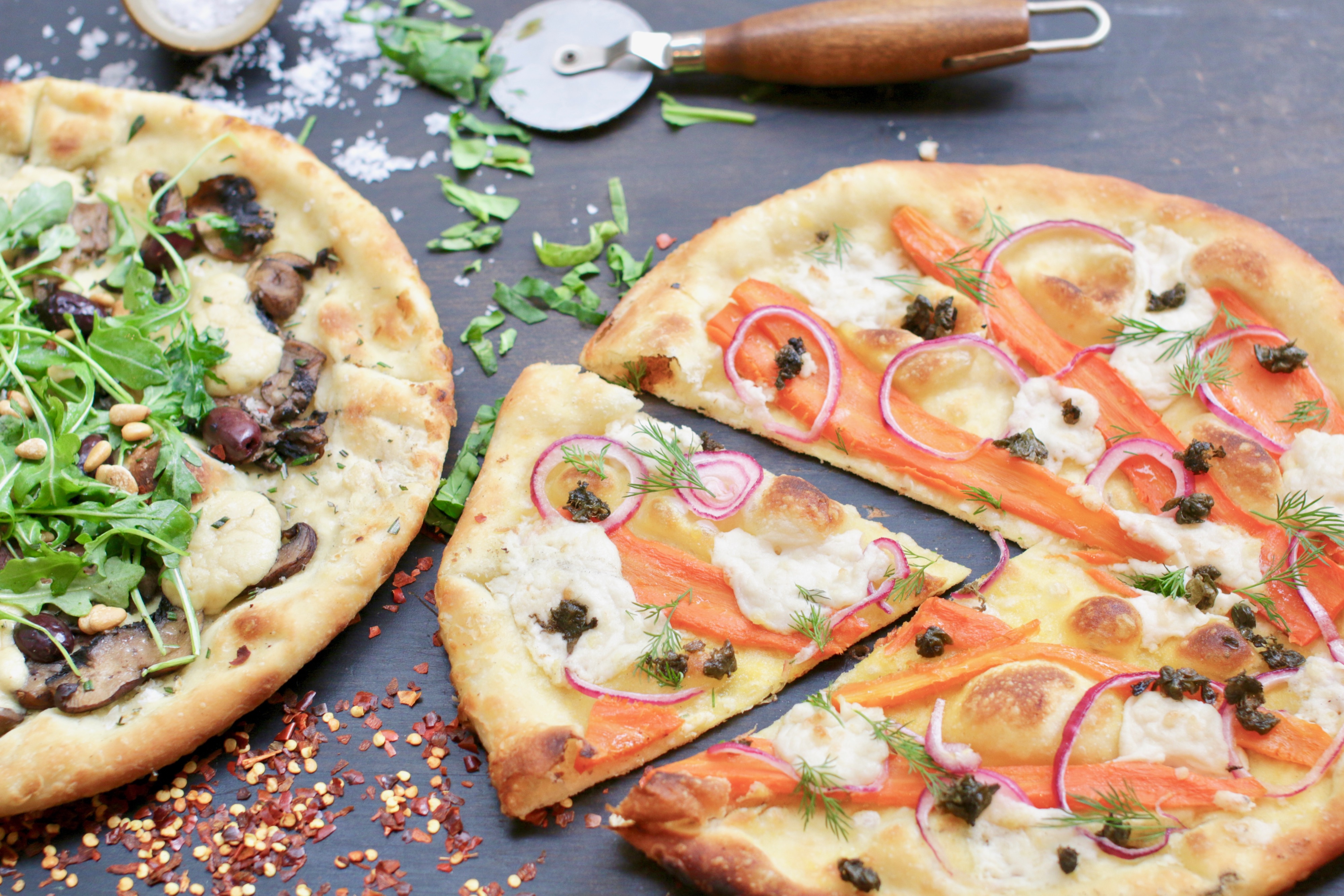 “We’ve been a trend setter since the ’80s,” says Il Fornello co-owner Stacey Patterson. “We were the first to do wood-burning VPN pizza, we were the first to have gluten-free crust and now we have vegan menus.” They brought in chef Margie Cook to oversee the development of the chain’s vegan program, and she’s making all the plant-based cheeses in her own off-site kitchen for all six Il Fornello locations. Cook calls this smoked salmon pie a “pizzafied” version of a cream cheese–and-lox bagel. She encases carrots in a salt crust and bakes them for over two hours, before chipping them free, slicing them lengthwise and marinating them in a smoky sauce. The creamy base is a cashew-almond mix that gets a hit of extra cheesiness from some nutritional yeast and some tang from a squeeze of lemon. Pickled red onions, fried capers and dill fronds complete the pie. $17.50. 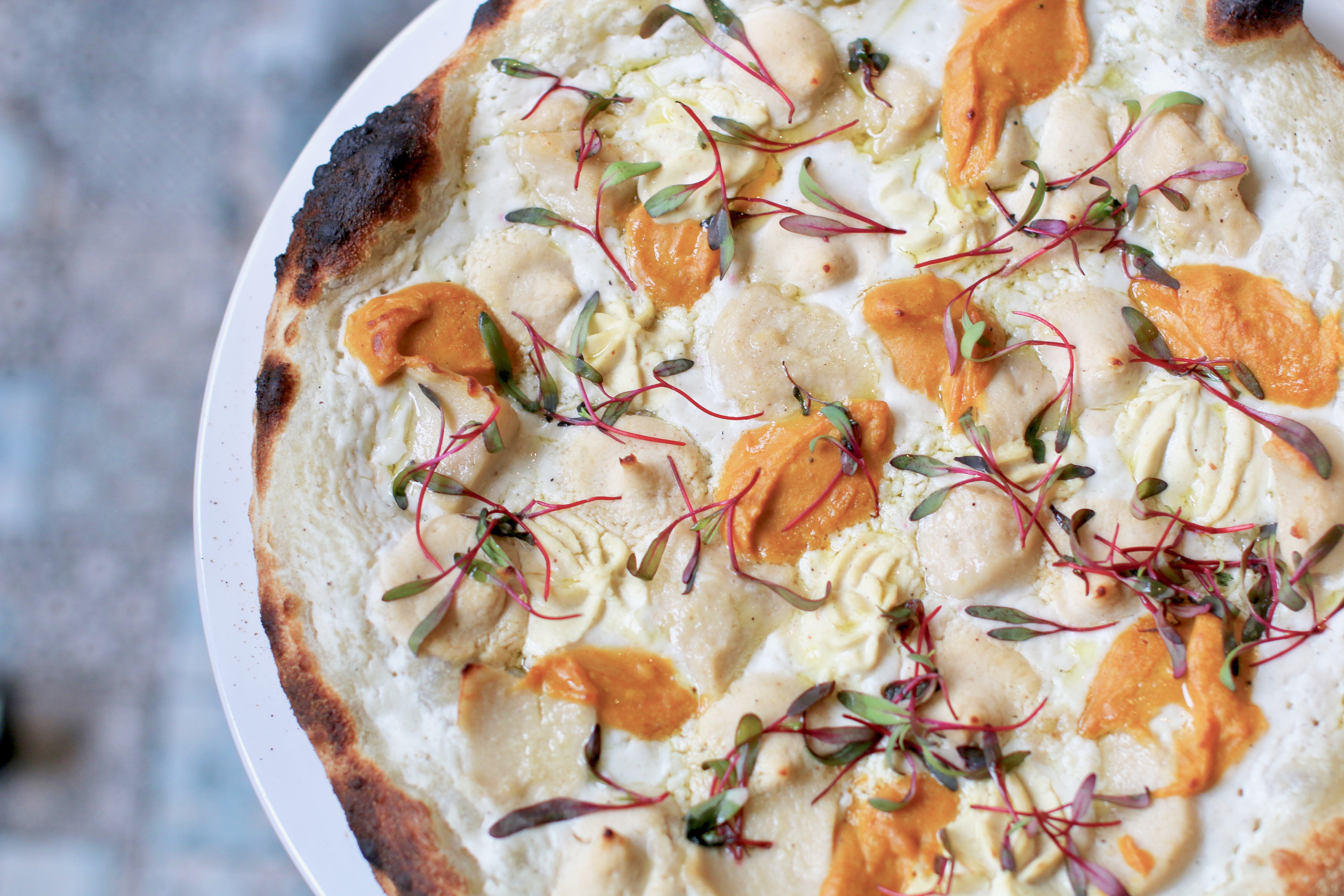 Away Kitchen and Cafe doesn’t have a head chef. The little sibling to the more formal Awai works as a collective, but they do have staff with specialities, and pizza is Dualco De Labio’s forte. The Brazil-born chef spent two years perfecting this three-day proofed dough. “I blend a few flours and there’s a Brazilian root in there, too,” says De Labio, who’s tight-lipped about the exact process that yields this crispy-chewy base. The quattro formaggi pizza comes in two permutations: red and white. The uber-creamy white version (pictured above) swaps out a cream base for a decadent cauliflower sauce. The show-stopper cheeses are all house-made and include a hemp cheddar, a macadamia nut goat, almond-cultured ricotta and cashew mozzarella. Baby beet greens add a splash of colour. $17. 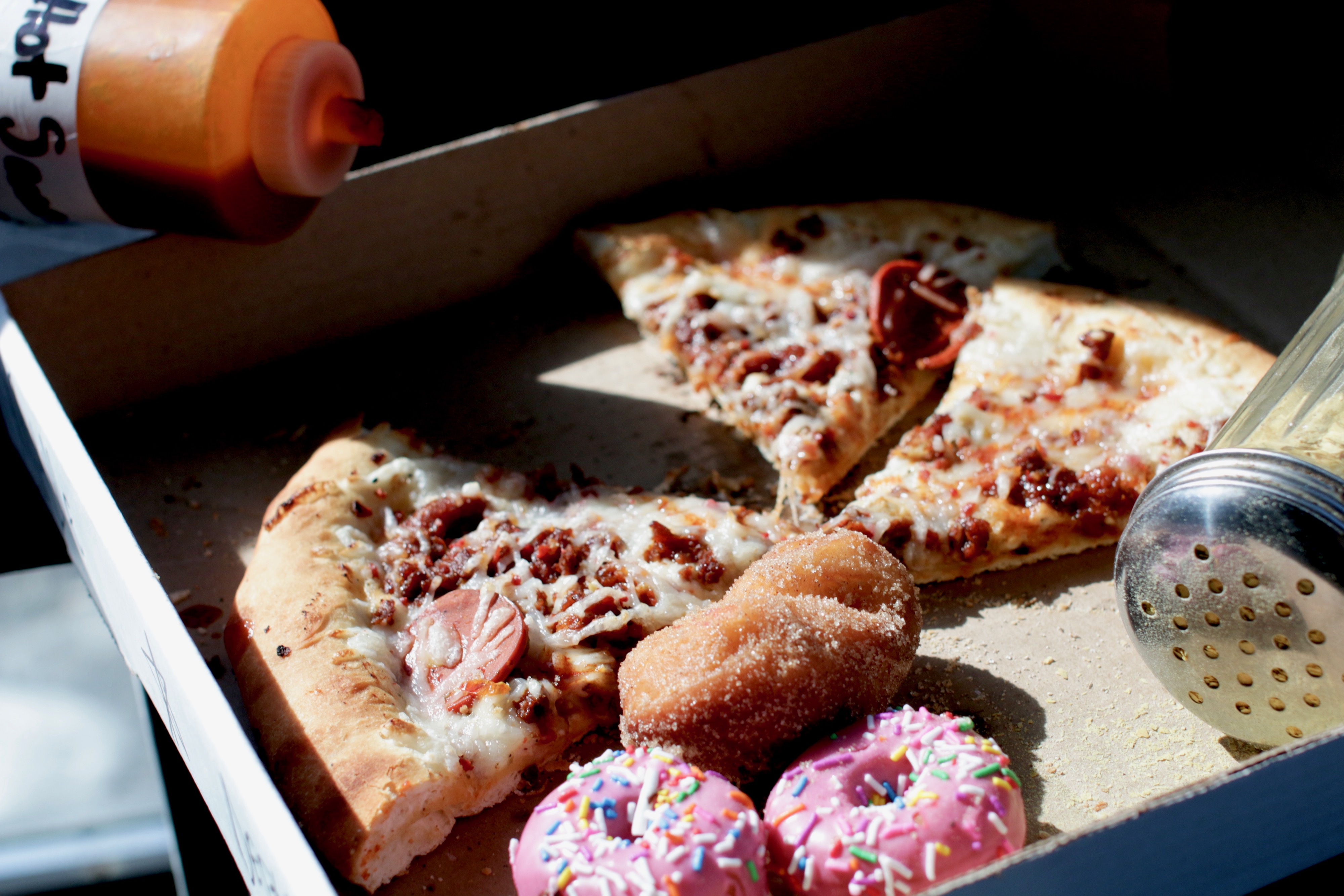 This lo-fi Koreatown room has been churning out over-the-top vegan junk food—pizzas, doughnuts, poutine—since 2010. Out of the dozen pizzas on offer, their most popular pie is a plant-based take on a meat-lovers pie called The Pig Destroyer Destroyer (yes, that second “destroyer” is intentional). A traditional thick crust is slathered with slow-roasted garlic sauce and hot sauce before it’s piled high with Daiya vegan cheese and smoked gouda-style crumbles. The pretender pork products comes in the form of hickory-flavoured soy curls, vegan bacon bits and vegan pepperoni. Although it strays from the porcine theme, there’s some imitation ground beef on there, too. And, because vegetables are important, there are a few artichoke hearts scattered about the pie. $19. 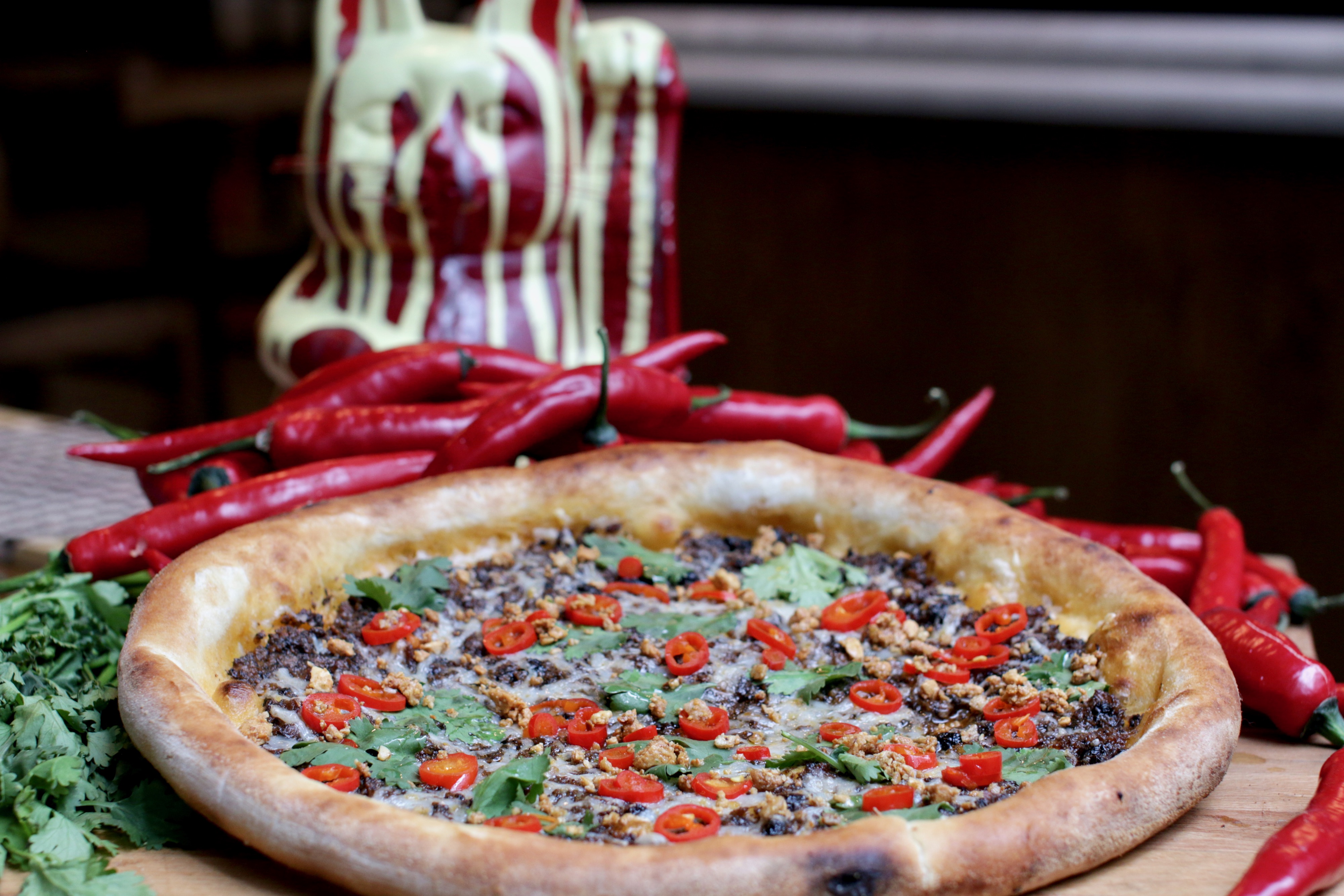 At this Financial District food hall, restaurant stalls are positioned cheek-by-jowl, which means there’s sometimes collaboration between vendors. This Good Son/Little DaiLo team effort plays on mapo tofu. Instead of a tomato sauce, chef Nick Liu has made a vegan mapo sauce from honey and maitake mushrooms, which is mixed with his BBQ tofu (which tastes a lot like char siu), and then ground. The mushroom medley is thrown in a wok with garlic, onions, ginger and black beans before it’s ladled onto the pizza dough. The base is then topped with Emborg’s vegan mozzarella shreds, confit garlic gloves and pickled Anaheim chilies. As soon as it comes out of the oven, the pie is decked with an almond-onion crumble, sprigs of cilantro and sesame-chili oil. This is the greasy, spicy, salty, sweet Italian-Chinese mashup we didn’t know we wanted. $11.95 and up. 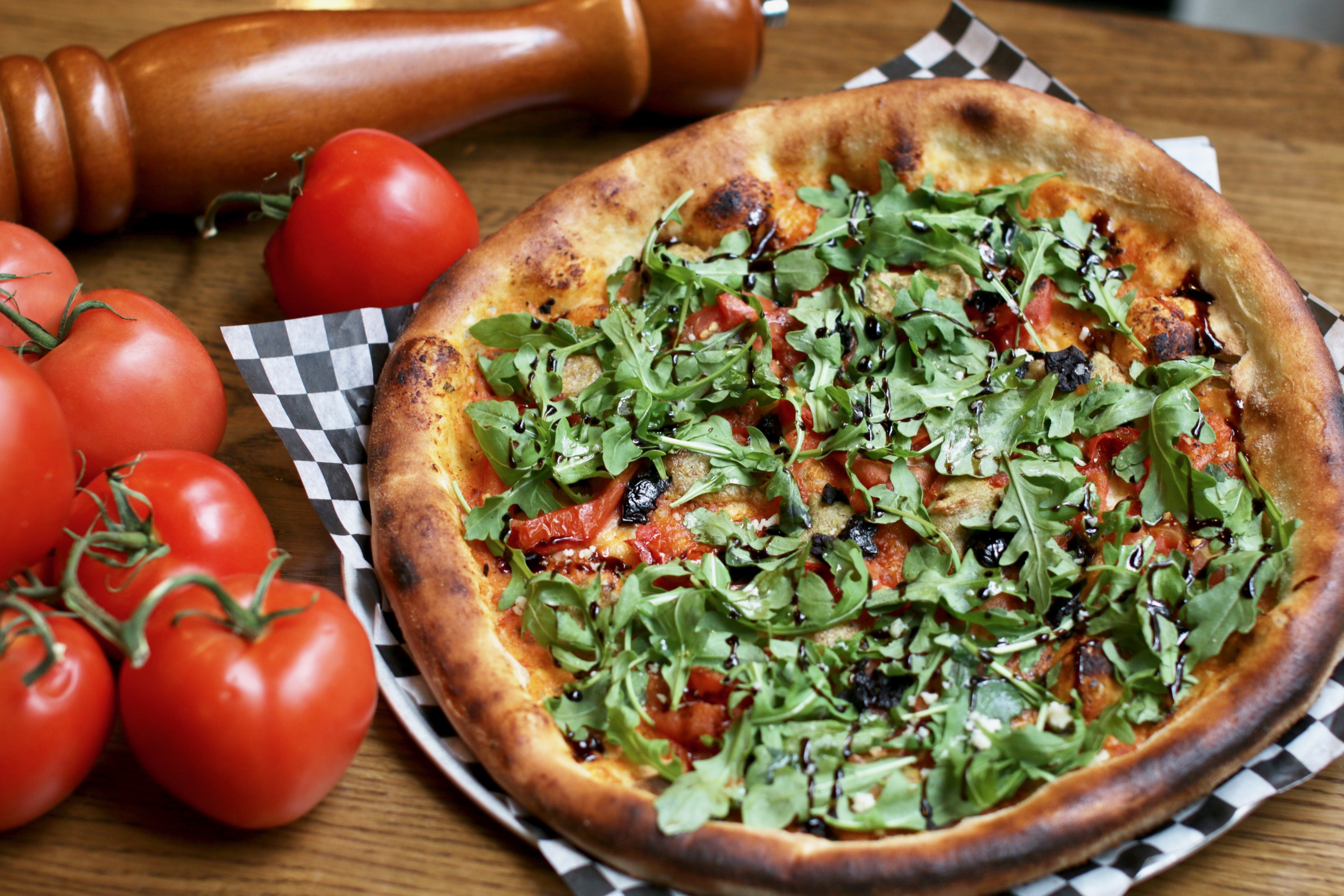 Starting April 12, The Good Son (which just opened a location at the Shops at Don Mills) is officially launching their new weekly vegan pizza. The plant-based special will change regularly, but chef-owner Justin Xerri is kicking things off with a spring-inspired pie. The restaurant’s dough is topped with tomatoes (whole and in sauce form), black olives, arugula and vegan feta. The cheese is a blend of almonds and pistachios, puréed with lemon and garlic and left to strain overnight in a cheese cloth. The resulting faux feta has a sharp kick and a lingering taste from the floral pistachio and garlic. A flurry of almond parm and a cross-hatched balsamic glaze complete the pizza. $11.95 and up. 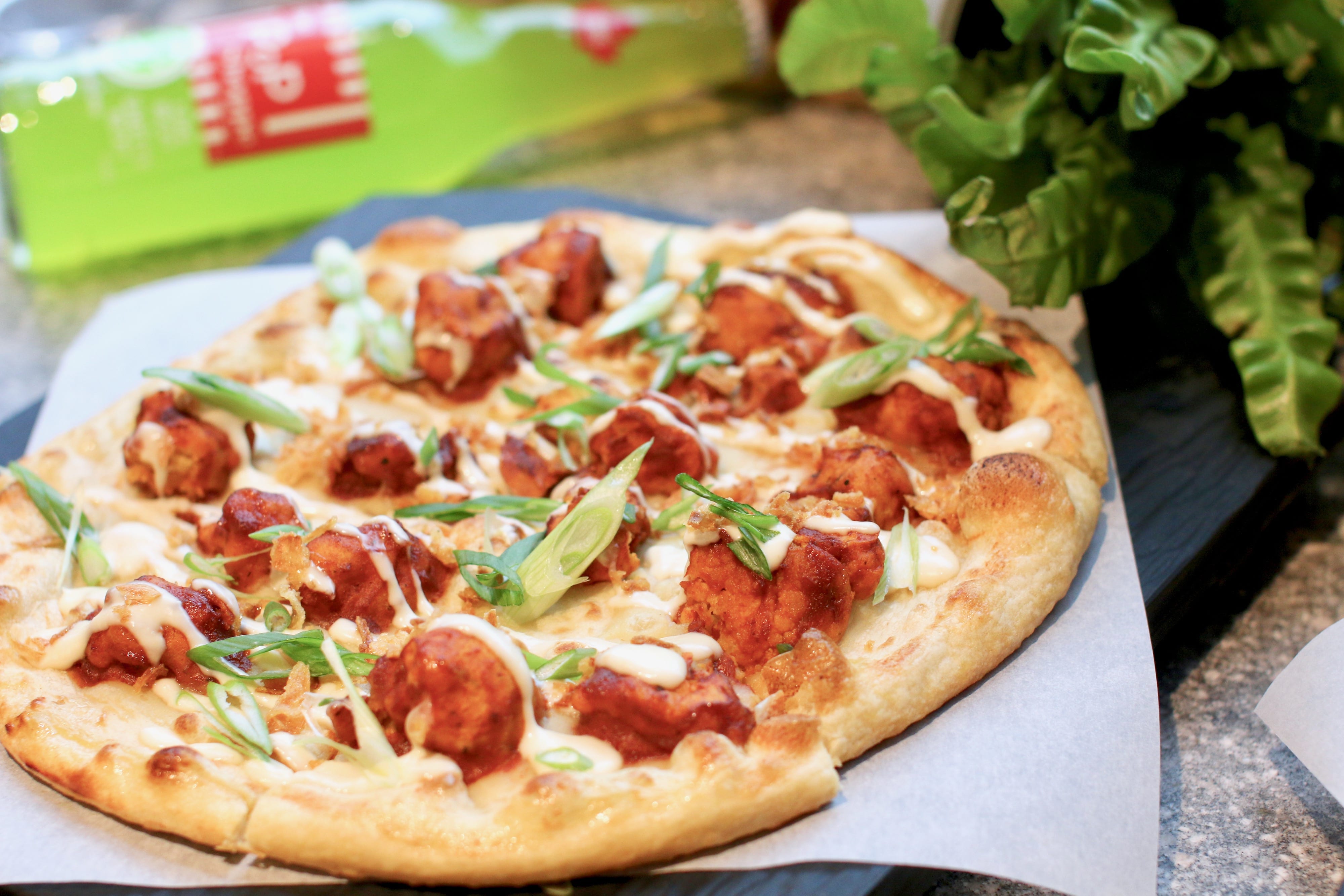 This quick-service vegan chain born in B.C., opened in Little Italy last December. The mostly Italian menu ranges from pies that might fool a passing nonna, to some seriously irreverent options. No matter the pizza, the dough is legit: a three-day fermented, hand-tossed base is the start of every pie here. One of the most out-there creations is called Stranger Wings. For it, cauliflower croquettes doused in a buffalo sauce are added to a white pizza that’s finished with a zing of blue cheese sauce made from nutritional yeast and vinegar. $15. 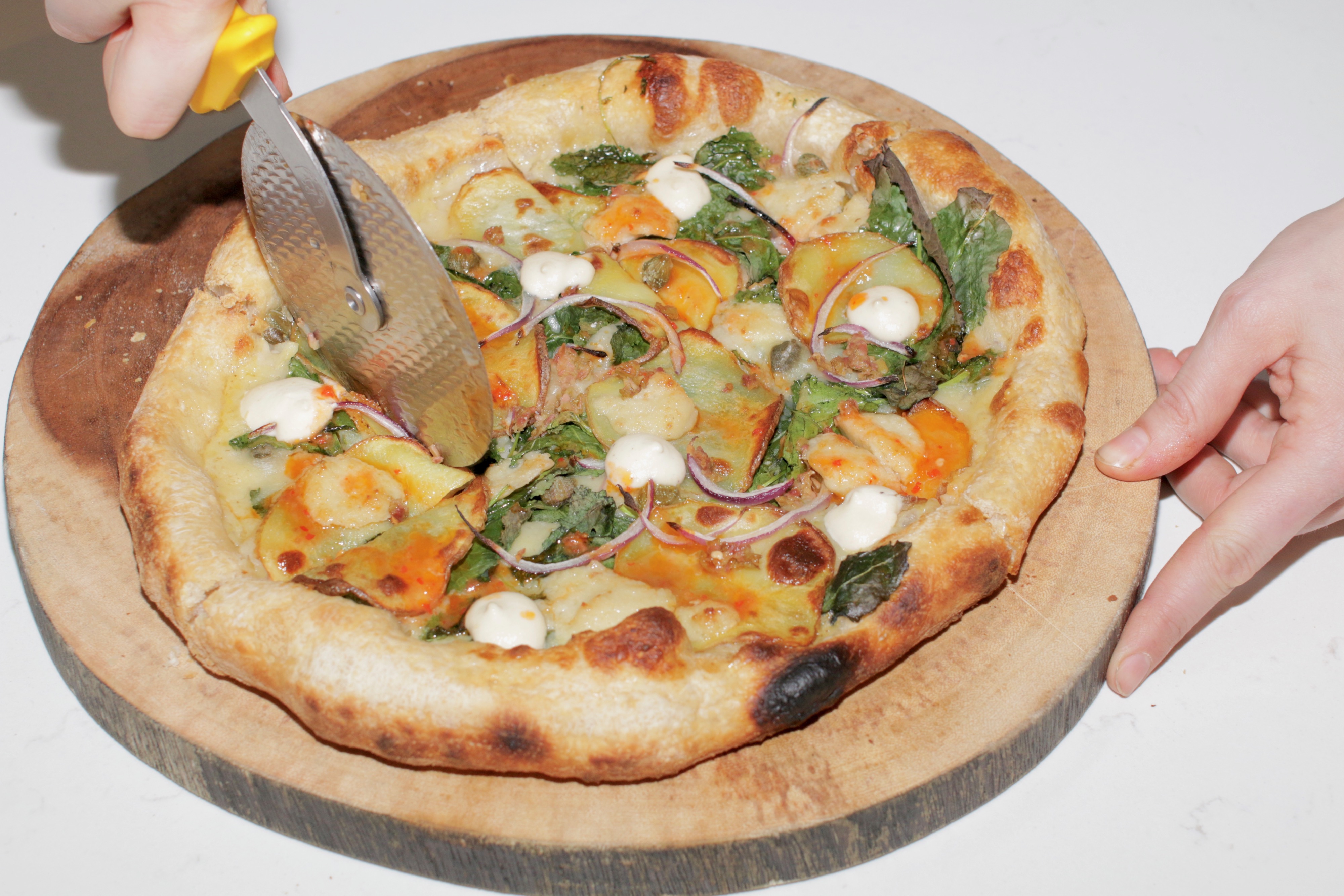 David Lee may have left the world of fine dining behind, but he hasn’t left Toronto in the lurch. You can still eat Lee’s recipes—just minus the meat, eggs and dairy. At Planta, he’s brought vegan plates to tony Yorkville and, just recently, the Financial District. One of the top-selling pies at Planta on Bay is the Bianca: a white pie that doesn’t shy away from carbs. On a thick, two-day fermented crust, a white cauliflower sauce base is topped with rosemary-roasted slices of yukon gold potatoes, deep-fried capers, baby kale and purple onions. The dairy dupes comes in two forms: cashew crema and cashew mozzarella, which does boast some actual mozzarella-like pull. A lashing of Thai chili hot sauce is applied to every pie before it’s sent out. $19.50.

Making a raw pizza is a laborious affair. At Rawlicious, the crust alone takes almost a full day to make. Buckwheat is soaked in water until it sprouts, and then thrown into the food processor with flax, carrots and olive oil until it forms a dough-like mixture that’s then spread into a circular shape and left to dehydrate at 118°F for 18 hours. (According to raw-eating rules, anything hotter than this is where the enzymes start to breakdown.) Traditionalists can do a marinara with cashew cheese, but the most popular pie at Rawlicious is about as far from Italian ‘za as you can get: the Tropical Pizza tops a pesto base with mango, pineapple, purple onion and pine nut parmesan. $12.50. 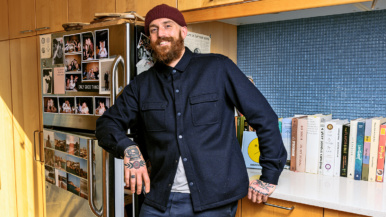 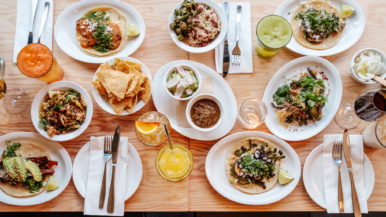 What’s on the menu at Tacos Rico, the new plant-based taco joint from the Grand Electric team 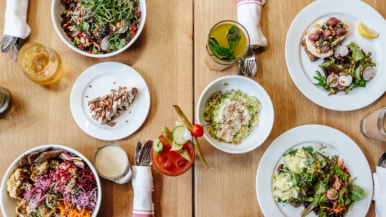 What’s on the menu at Kupfert & Kim’s Bistro, the plant-based brand’s first full-service restaurant, in Yorkville 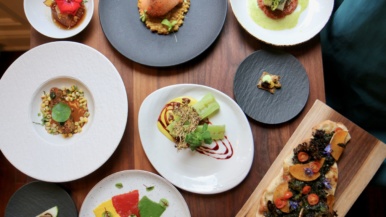 What’s on the menu at Avelo, a new place for fancy plant-based tasting menus 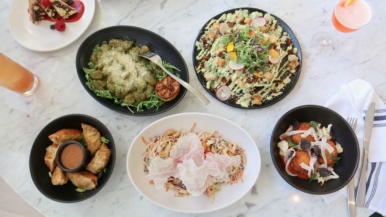 What’s on the menu at Lov, the first Toronto location of Montreal’s popular plant-based restaurant 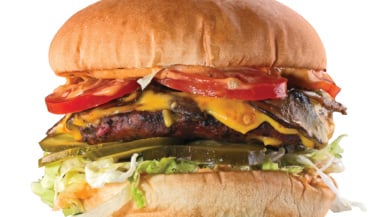