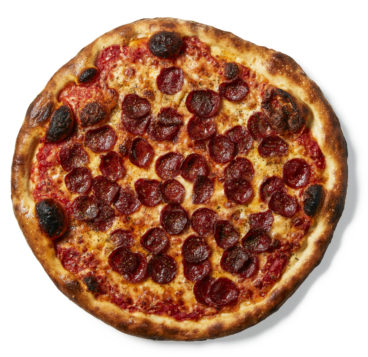 Toronto in 2021 is teeming with excellent pizza options. What better time to rank the best of the best?

There’s never been a better time to order in. But as much as we love all the fancy takeout options we suddenly have at our disposal, it’s hard to top pizza night. These are our go-to pies 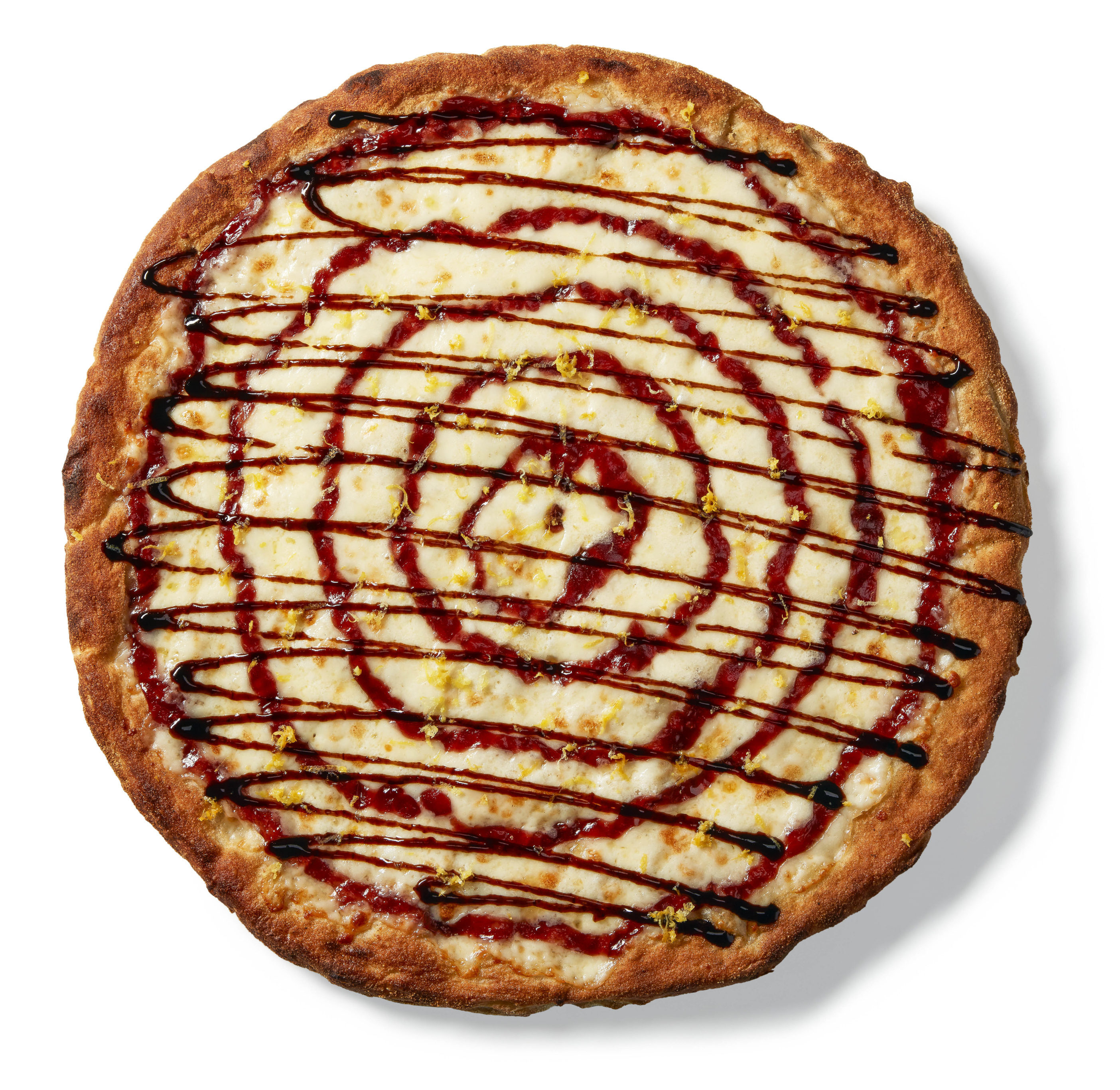 20 This Chinatown takeout counter does an adult version of dessert pizza. In place of savoury red or white sauces, a layer of buttercream is blanketed with mozzarella. It’s all finished with a hypnotic swirl of sweet raspberry jam, zigzags of tart balsamic reduction and a dusting of fresh lemon zest. With its toast-and-jam flavours, it’s also a perfectly acceptable breakfast pie. $18-$29. Bigtroublepizza.com 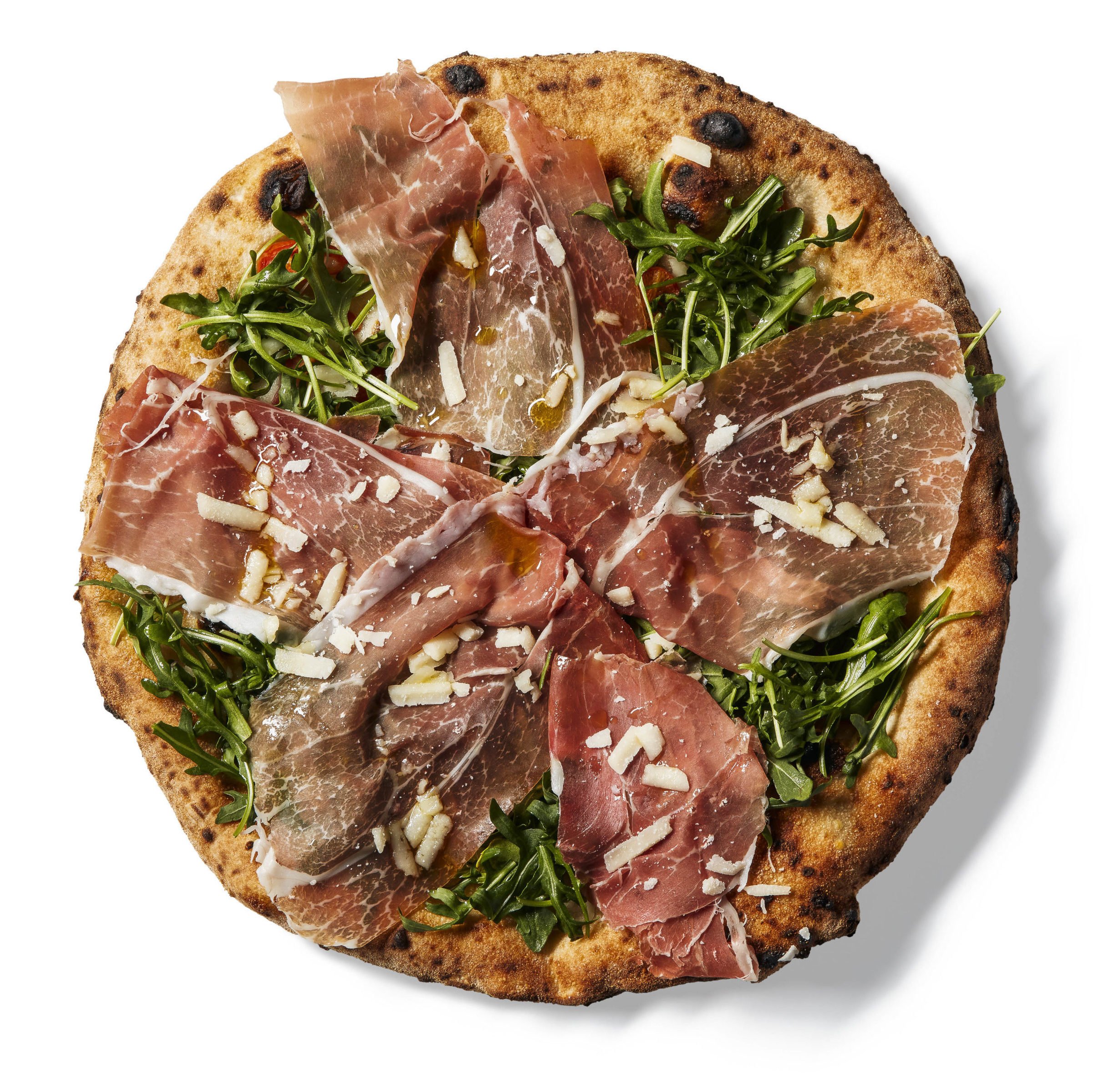 19 Bloor’s Italian gourmet megastore usually offers many different kinds of pizza, including Torino-style pan pizza and Roman-style slabs, but the Neapolitan pies are the most painstakingly curated. When in doubt, go for the one with the fanciest cheese: this sauceless pie is covered in prized Campanian buffalo mozzarella and grana padano, with a salumi board’s worth of prosciutto and enough arugula to feel less guilt about finishing the entire thing in one sitting. $26. Eataly.ca 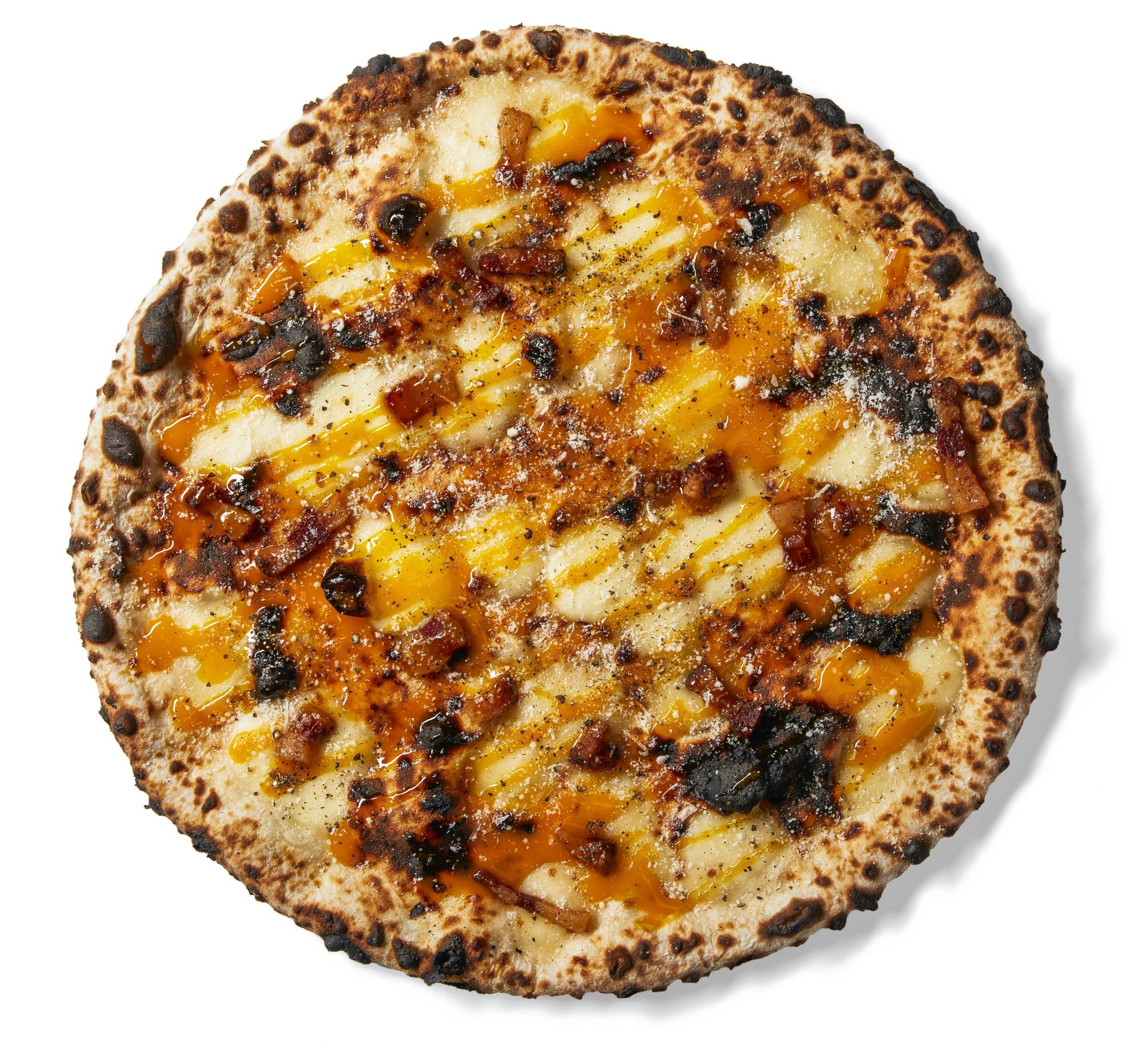 18 The Corktown outpost of Gusto 101 spins everything that’s great about one of the world’s best pastas into a pizza. The dough—stretched thin and baked to a blistered, cracker-like finish—is covered in fior di latte and guanciale, and streaked with enough bright-yellow egg yolk to paint a school bus. It’s finished with a generous dusting of pecorino and a healthy grind of black pepper. $19. Gusto501.com 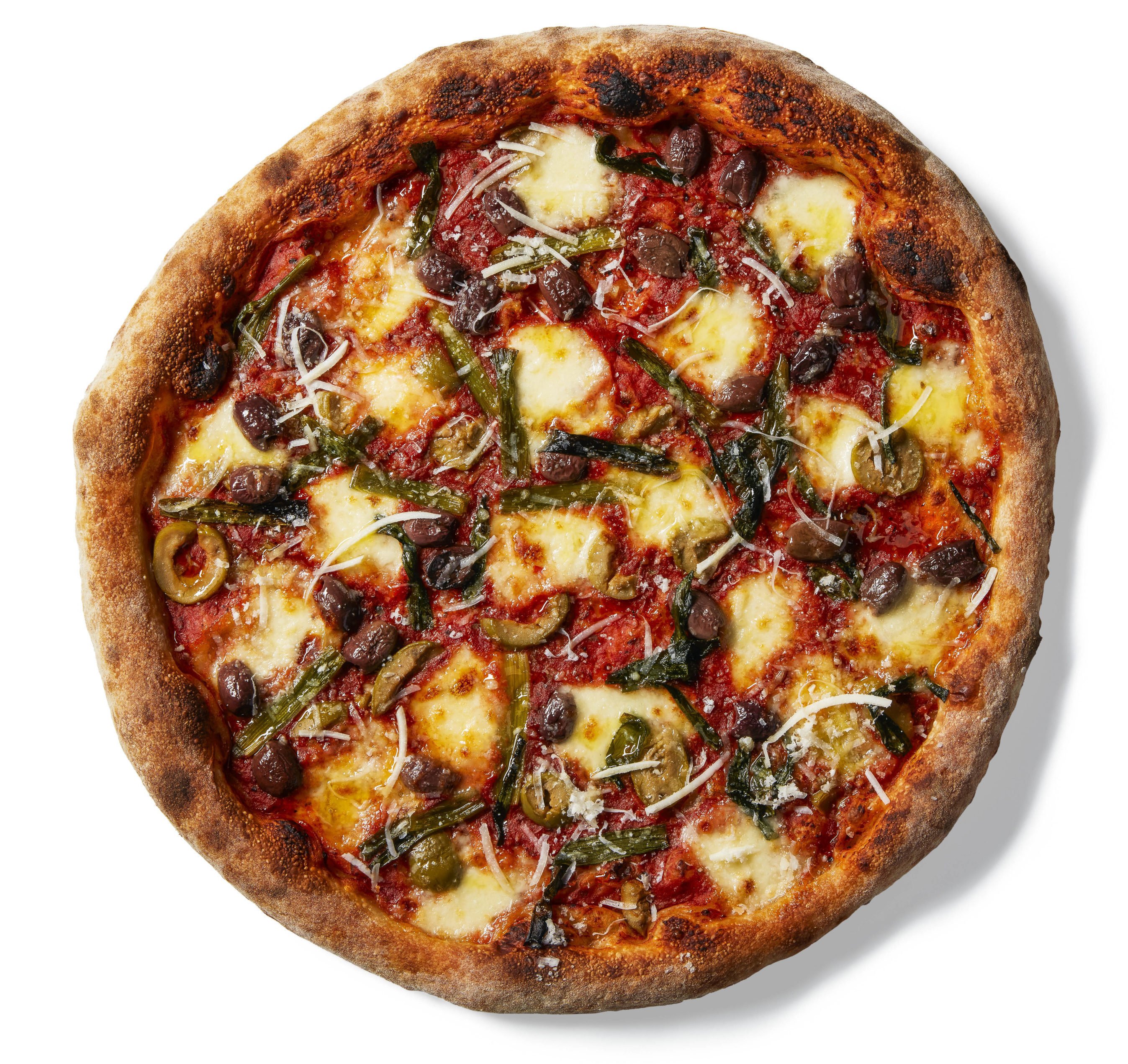 17 This simpler-is-better pie is all about that brine. Underneath a layer of mozzarella lies an ocean of anchovy-rich, hand-crushed puttanesca sauce. On top—doubling down on that salt appeal—not one but two kinds of olives (Taggiasca and gordal), scallions, grana padano and a lashing of olive oil. $18-$26. Northofbrooklyn.com 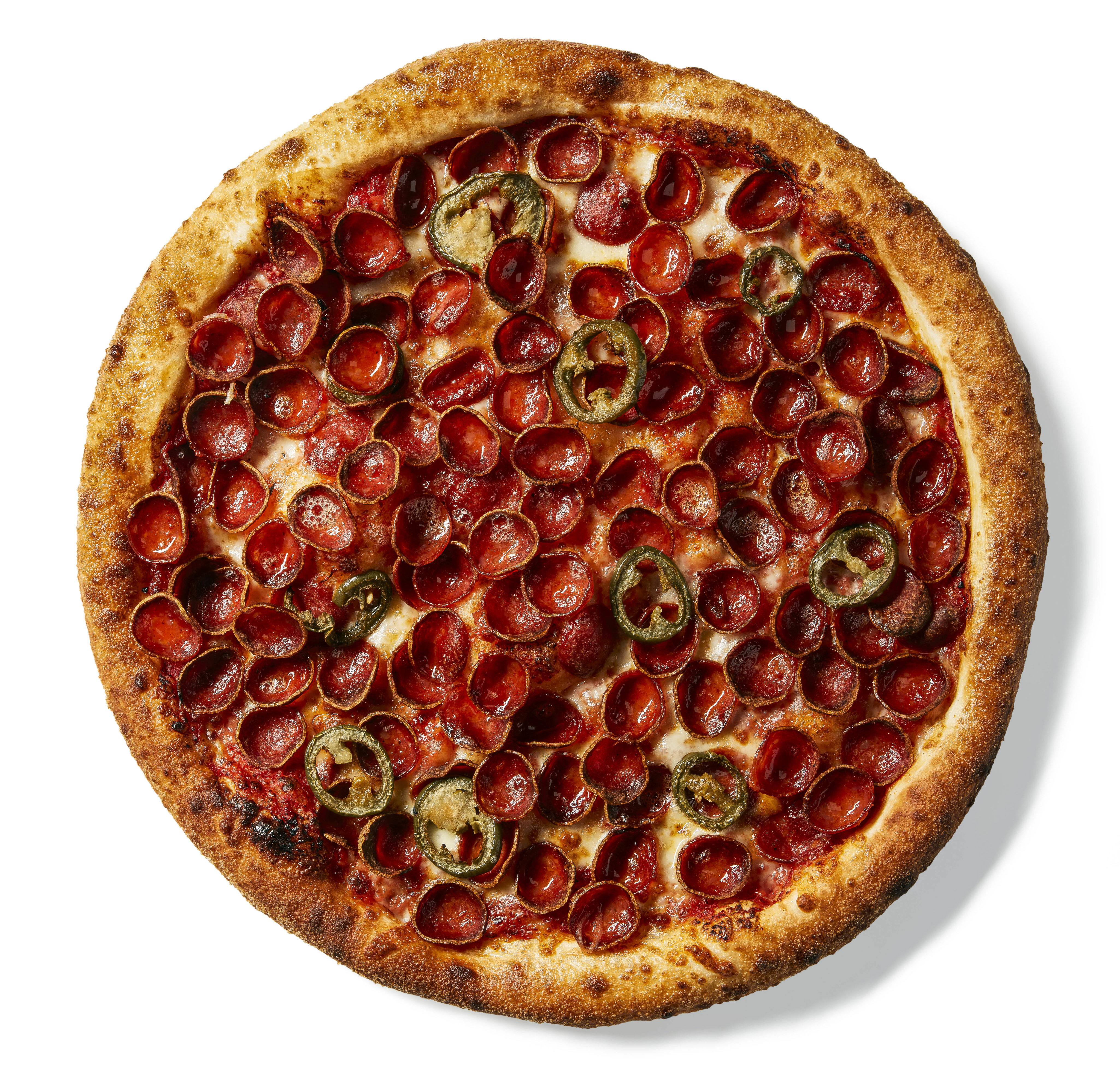 16 Every bite of this pie seems to contain a whole mouthful of perfectly cupped Venetian pepperoni— they’re stacked two and three deep in some spots. A scattering of pickled jalapeños adds a bit of bite, and a drizzling of honey balances the spice of the cured meat. It all rests on Blondies’ signature crust, which manages to be surprisingly sturdy yet totally foldable. $17-$26. Blondiespizza.ca 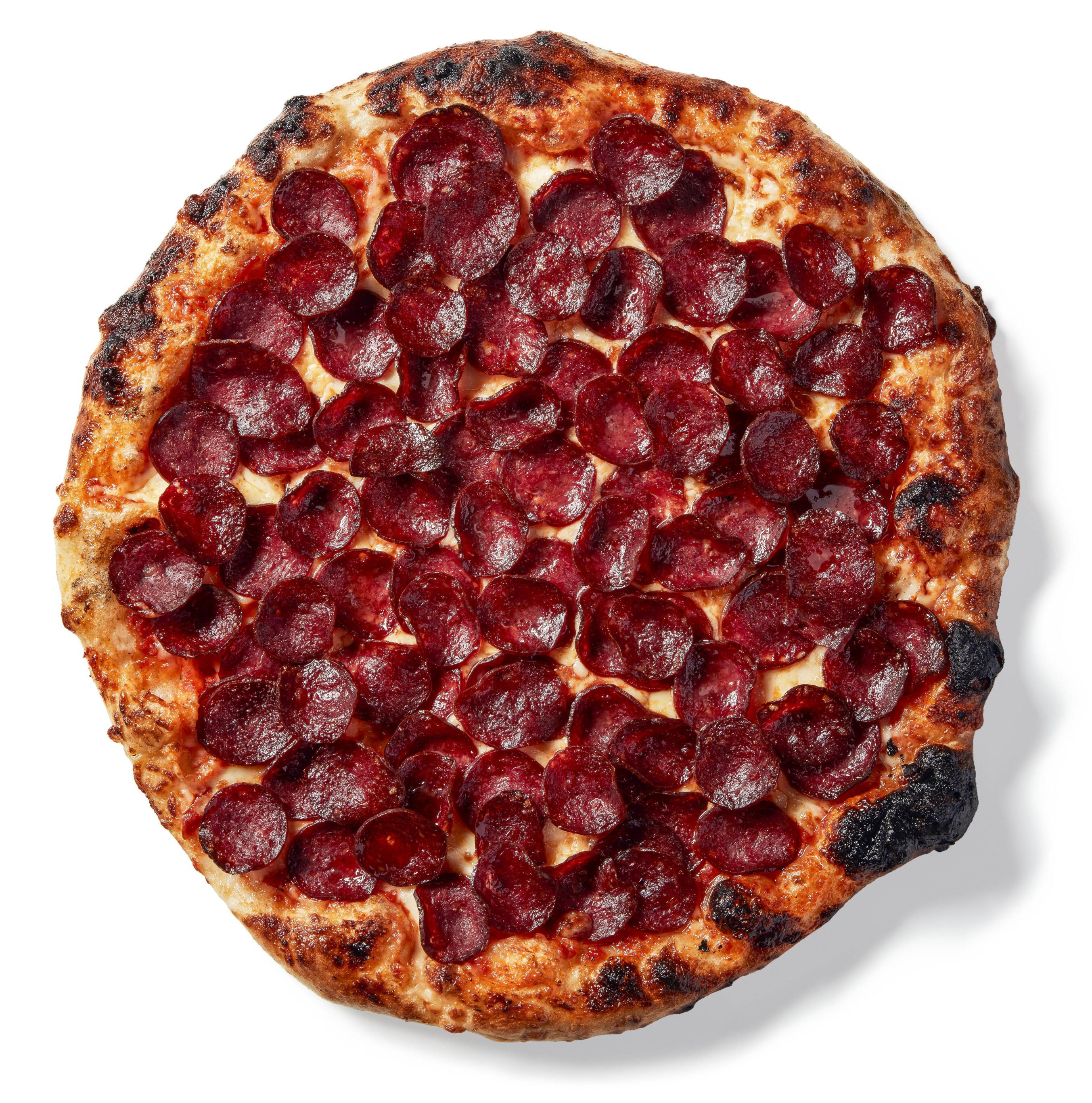 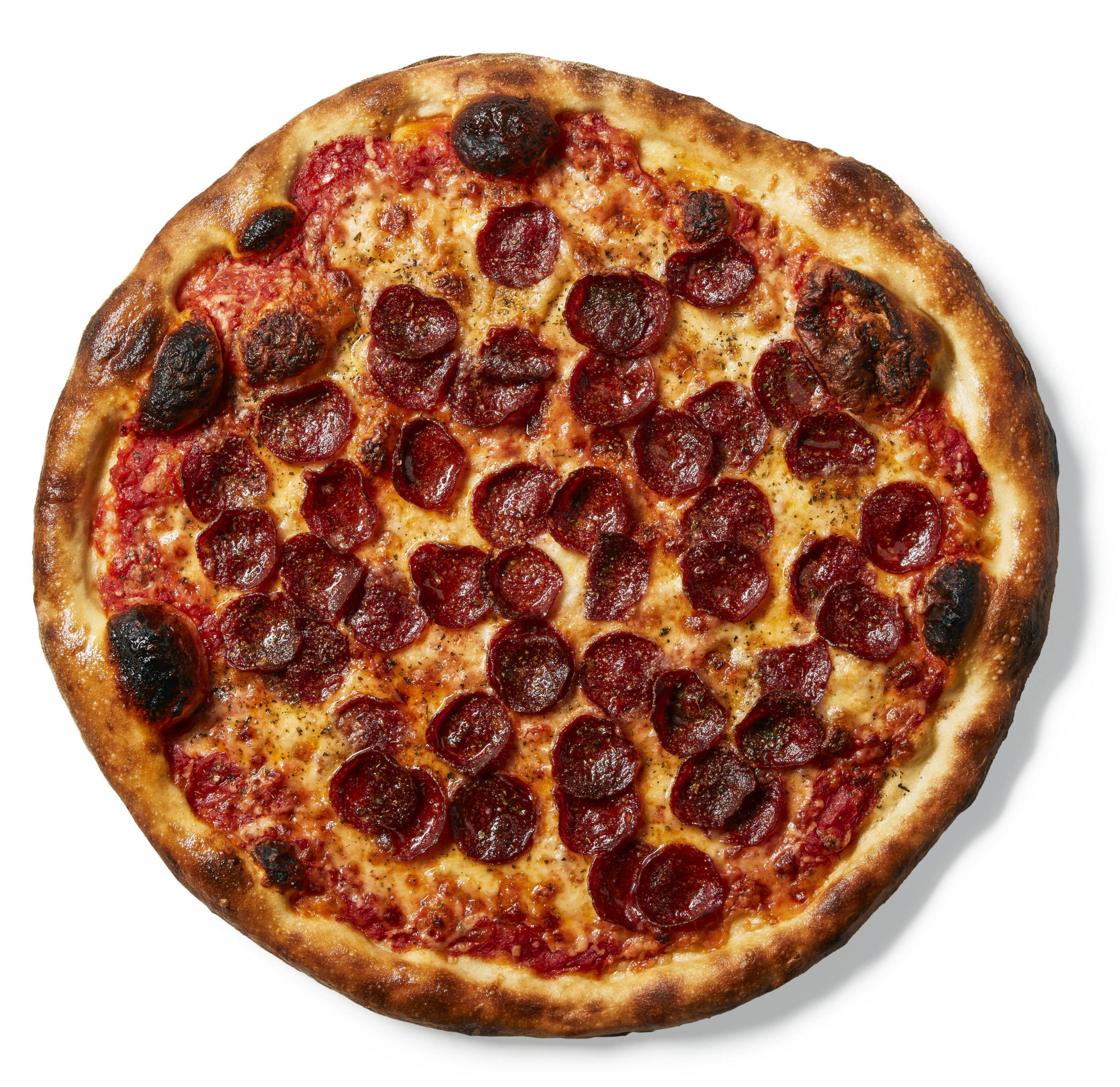 14 Take a trip to New York without leaving Toronto for some totally tubular Ninja Turtle–approved pizza. Of all the 18-inch pies here, we like the no-nonsense pepperoni best. Every flexible slice is super saucy and salty; each shiny, curled-up cup of pepperoni cradles a smattering of parmesan, melting like teeny piles of cheesy snowflakes. $30. Superpoint.ca 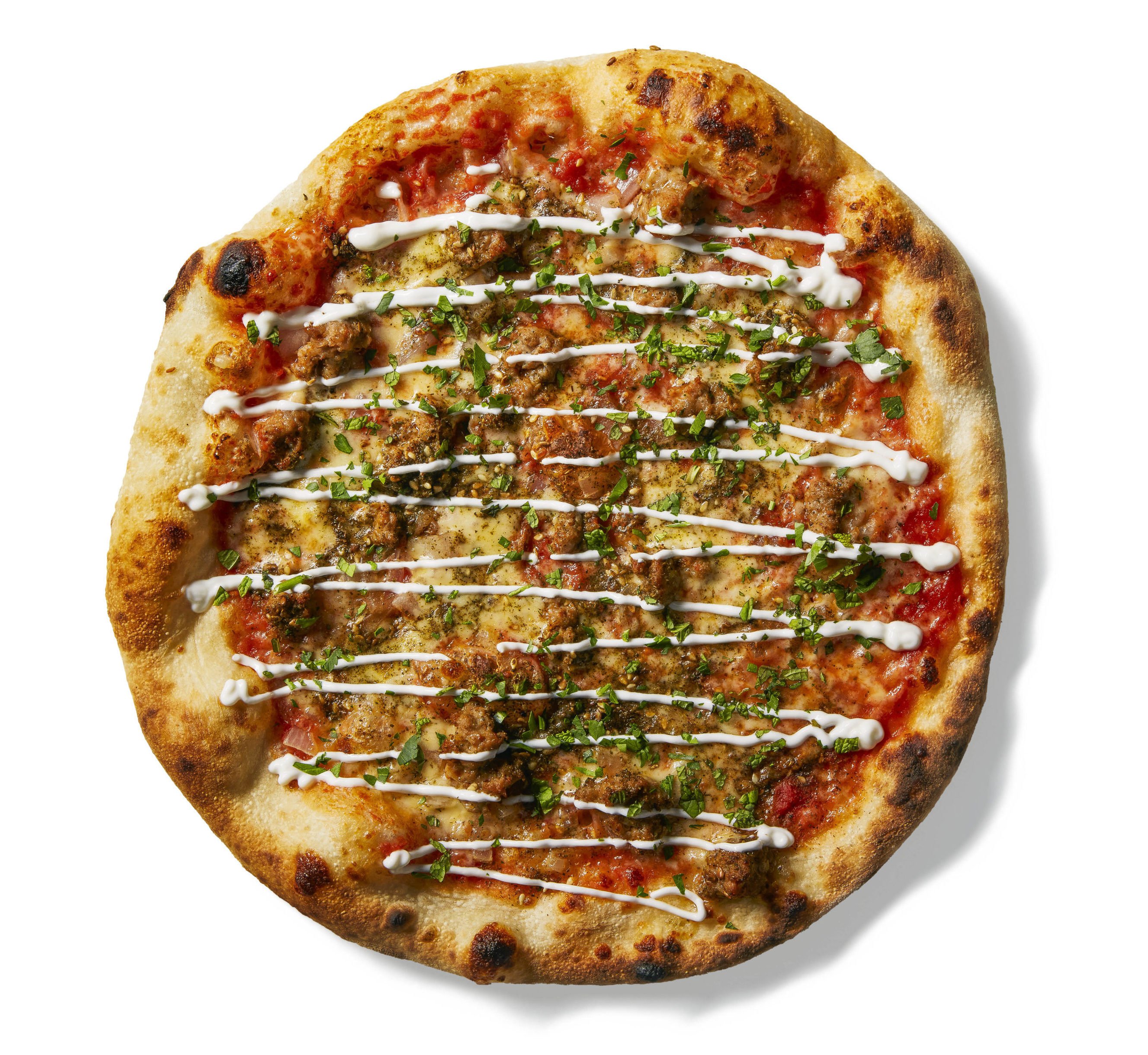 13 There’s a wide-open approach to toppings from this Adelaide pizzeria, from classic margheritas to pies with three kinds of pork. But we particularly like the herby Naples-meets-the-Middle-East vibe of this halal lamb sausage–strewn pie, streaked with labneh and dusted with za’atar, mint and parsley. $14. Gapizza.com 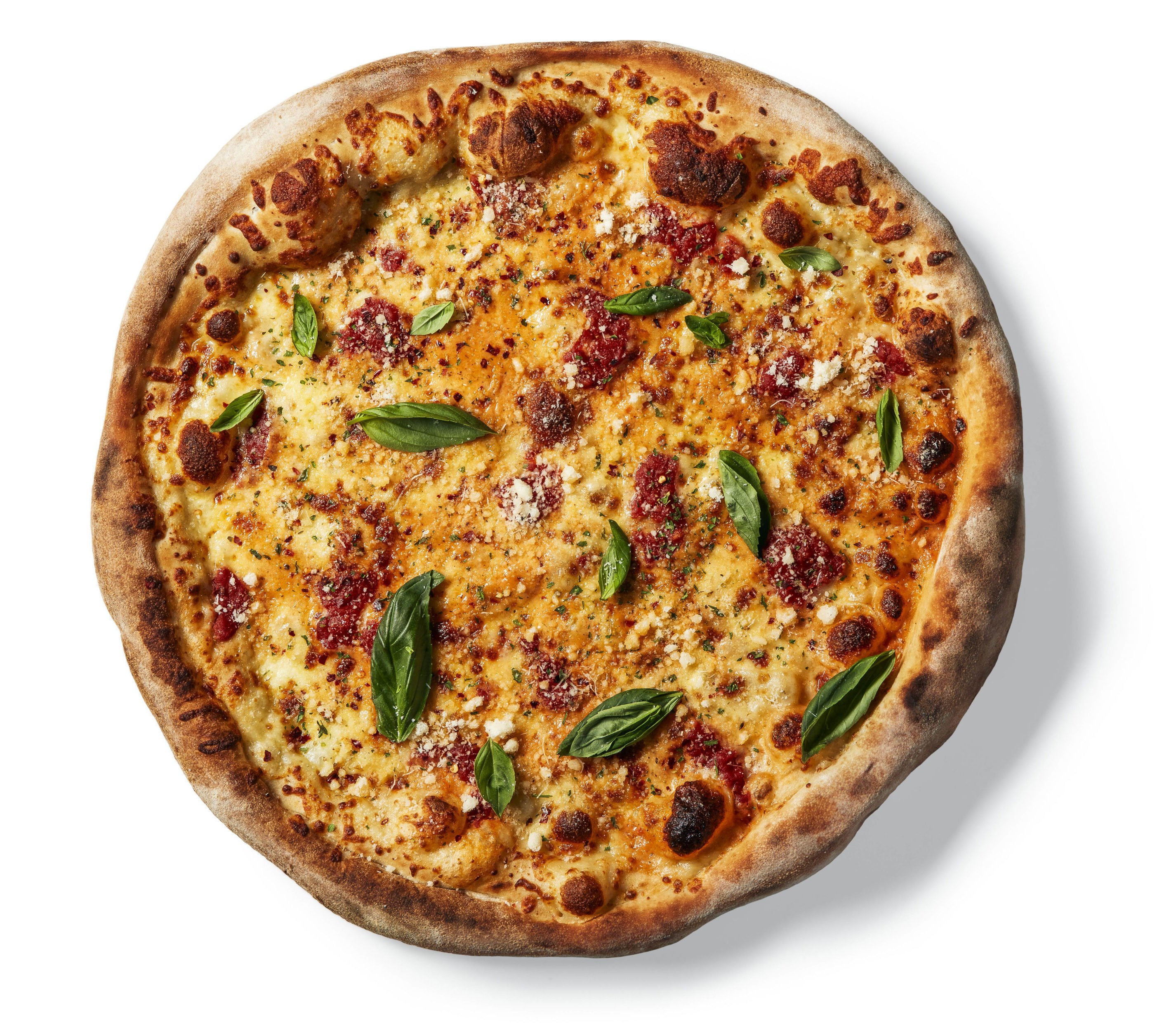 12 The pies coming out of this ghost kitchen range from classic (pepperoni) to experimental (clam pasta). This one, made with creamy house-made vodka sauce, strikes the perfect balance, topped with mozz and pecorino, basil, oregano and dollops of tomato sauce. $17. Mels-real-good-pizza.business.site 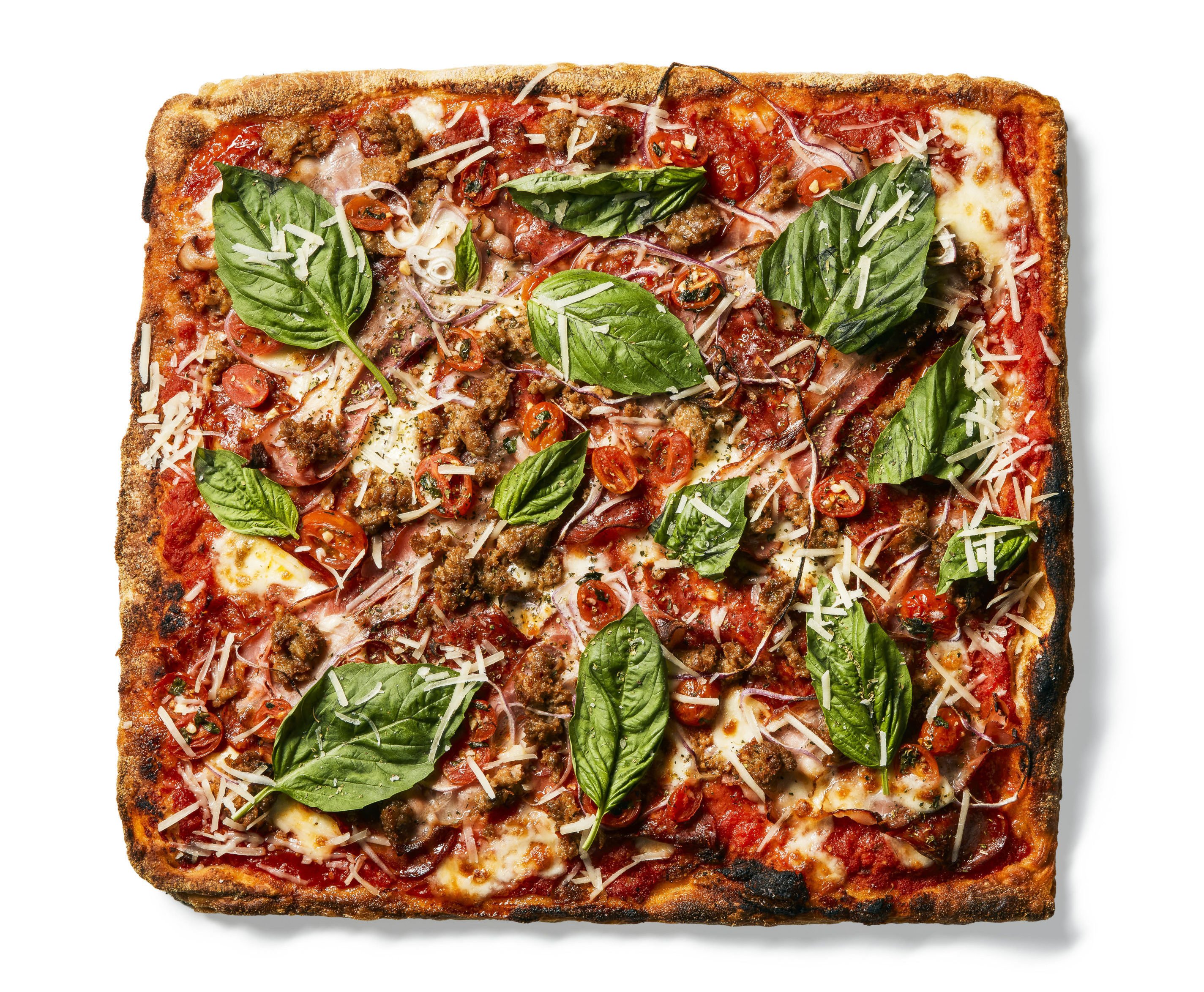 11 In addition to its namesake wood-fired pies, this Dupont pizzeria also does electric-oven pan pizzas that deserve recognition. The must-try is this three-meat feat, piled with chorizo, soppressata and smoked bacon, plus fior di latte, mozzarella and a one-two punch of San Marzano tomato sauce and cherry tomato confit. It looks homemade—like it was lovingly prepped by someone who won’t be happy until you’re stuffed. $35. Pizzeriadefina.com/woodfired 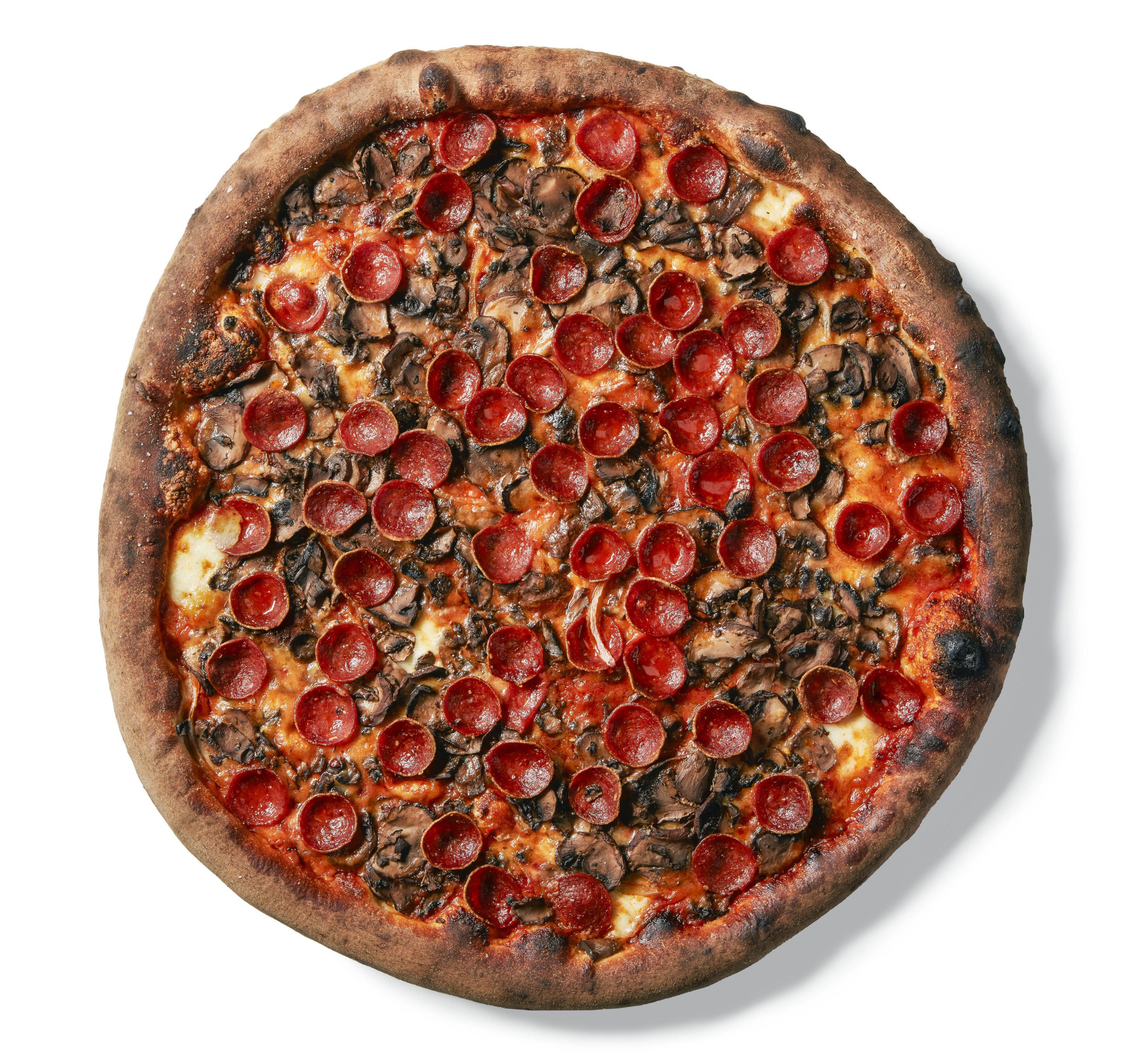 10 These supersized wood-fired pies are made with double-fermented dough for a crispy-chewy crust and topped with the tangy signature sauce from sister spot Sugo. The self-described “Conzo’s Favourite” is heaving with salty pepperoni, mushrooms, paper-thin red onion slices and chilis. This is pizza-party pizza. (For whenever we can have parties again.) $30. Pizzaconzo.ambassador.ai 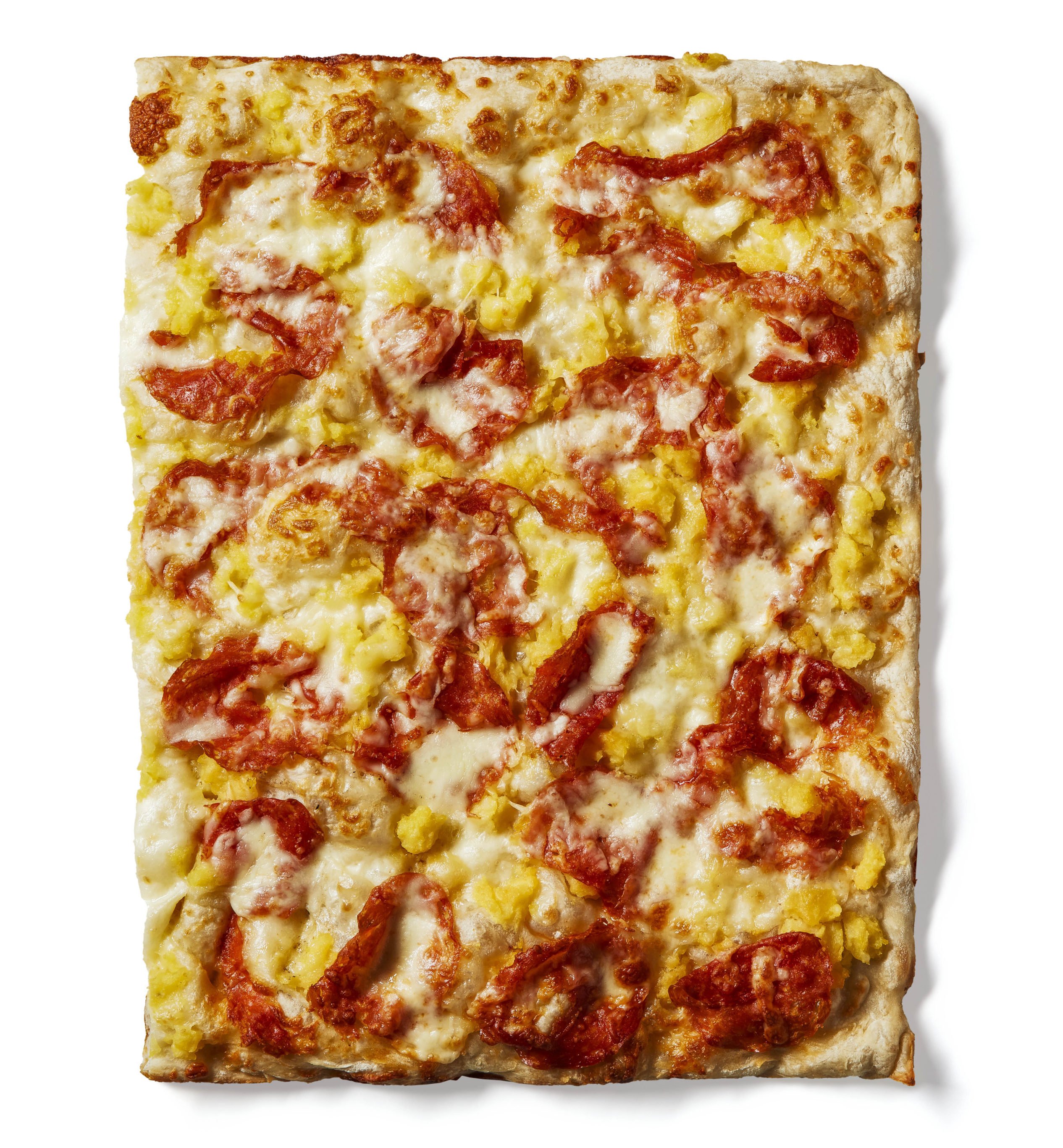 9 The pro move at this Woodbridge pizza al taglio specialist—where the slabs of pizza are cut to order and sold by weight, like they do it in Rome—is to buy a bunch of different slices to go. There are no bad options, but we’re partial to this white pie covered with comforting mashed potatoes and hunks of kicky Genoa salami. Slice price varies; $22 (half a pizza); $38 (whole pizza). Crpizza.ca 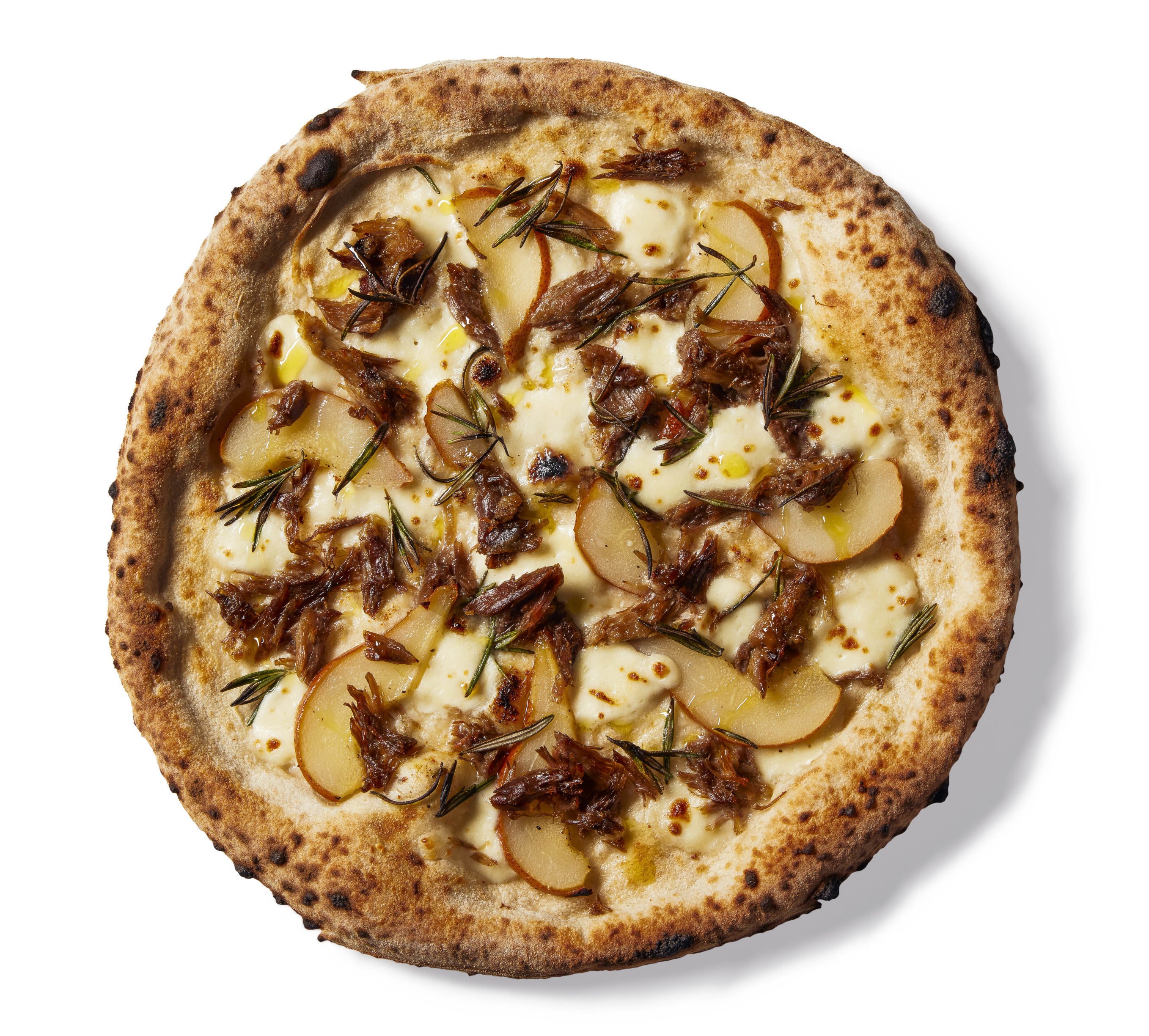 8 Libretto makes other amazing pies, but this one has been a staple of our best-of lists for more than a decade, and for good reason. Your classic wood-fired Neapolitan crust—blistered in all the right places—is adorned with mozzarella, shreds of super-tender duck, sweet bosc pear slices and fresh rosemary sprigs. $21. Pizzerialibretto.com 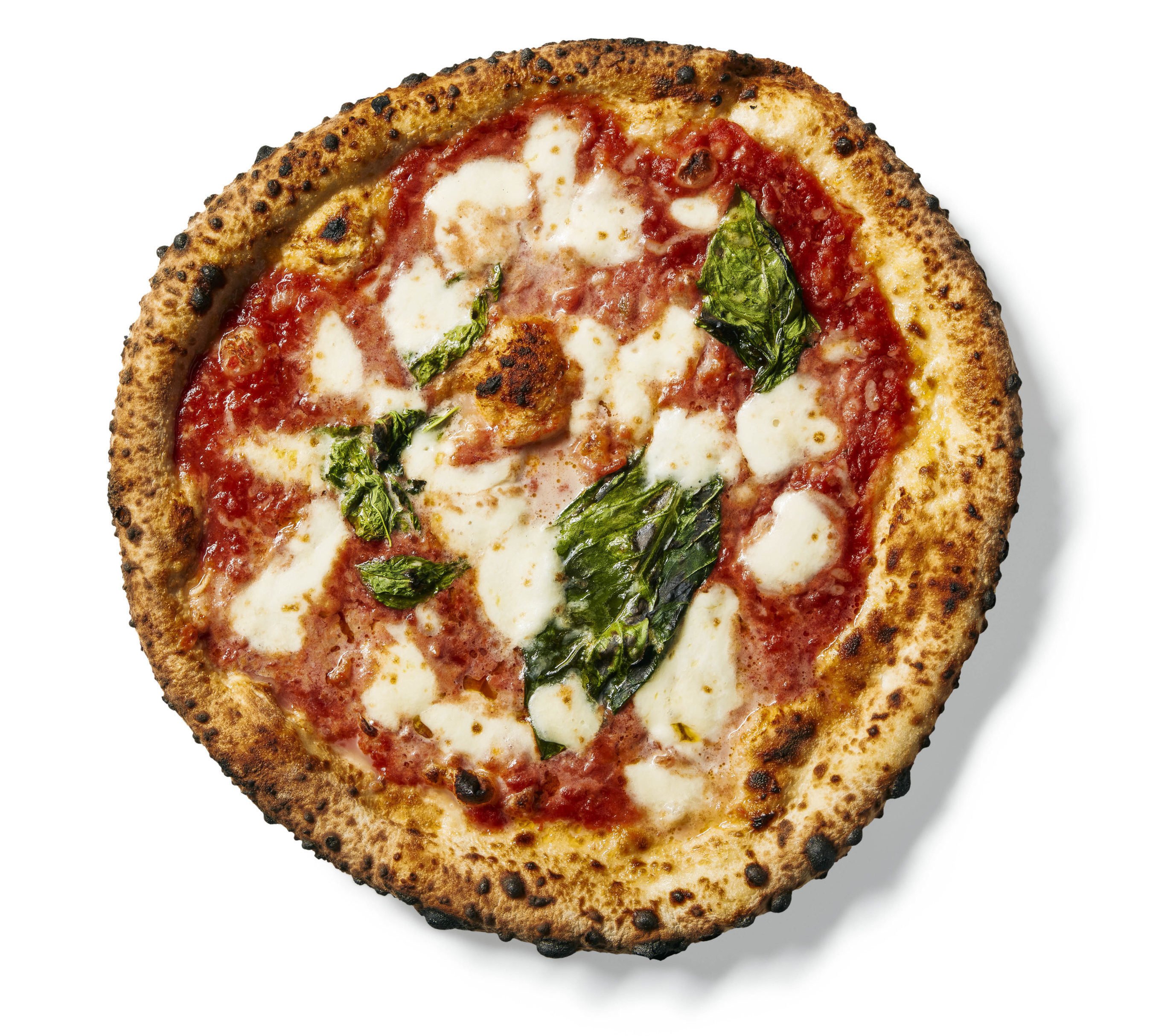 7 One of the dons of Toronto’s early 2010s Neapolitan pizza boom is still at the top of its game. The Queen’s margherita is a greater-than-the-sum-of-its-parts assemblage of fior di latte, crushed Italian DOP tomatoes and leaves of fresh basil. The clincher is the spectacularly chewy crust, its puffy rim popping off with scores of tiny leopard spots. $16. Qmpizza.com 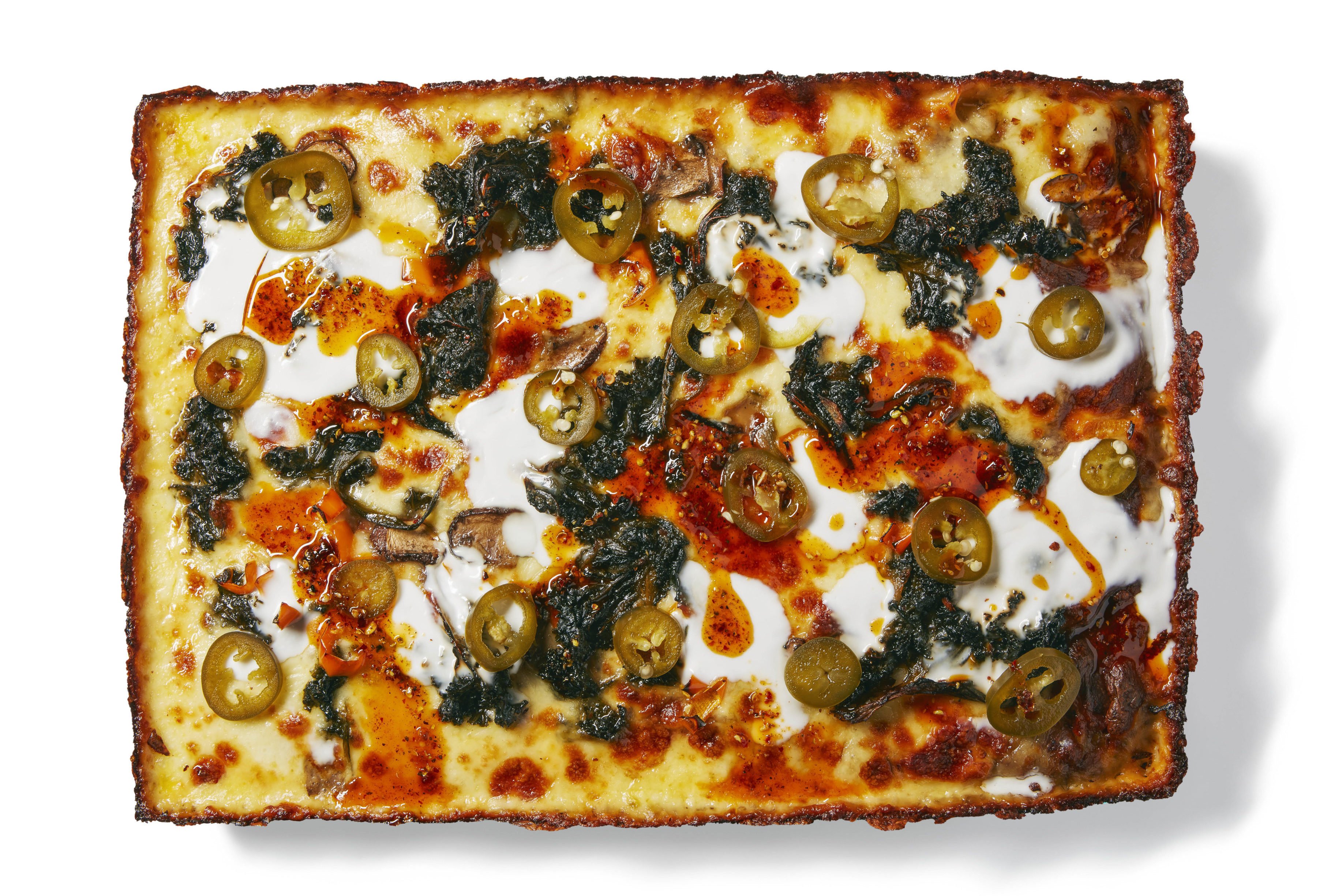 6 The Filipino-accented Detroit-style pies from this Brockton Village newcomer are an only-in-Toronto hybrid. For those who like it hot, this spicy pie is studded with pickled jalapeños, shishito peppers, chili oil and spicy stewed greens; they’re all mingled with mushrooms, cheese and cooling pockets of coconut cream. $22-$32. Saintsislandpies.com 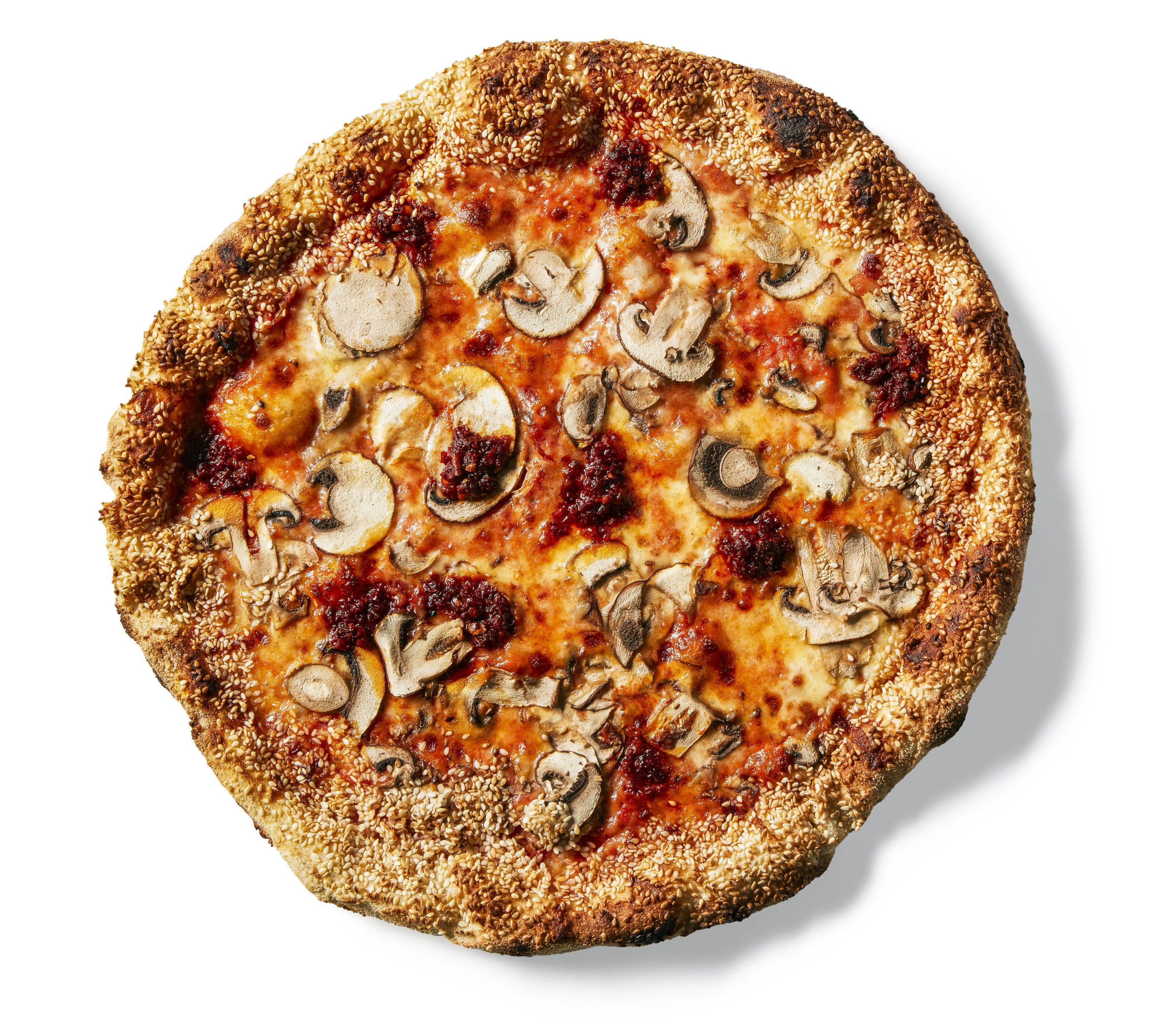 5 This Mimico pizzeria quietly opened in early 2020, just before the sauce hit the fan, so to speak. The pies here are of the floppy, blistery, wood-fired style, cut into slices perfect for folding. We’re big fans of this umami bomb topped with fior di latte, punchy ’nduja, wild mushrooms and a liberal sprinkling of nutty sesame seeds. $18-$28. Revolverpizzaco.com 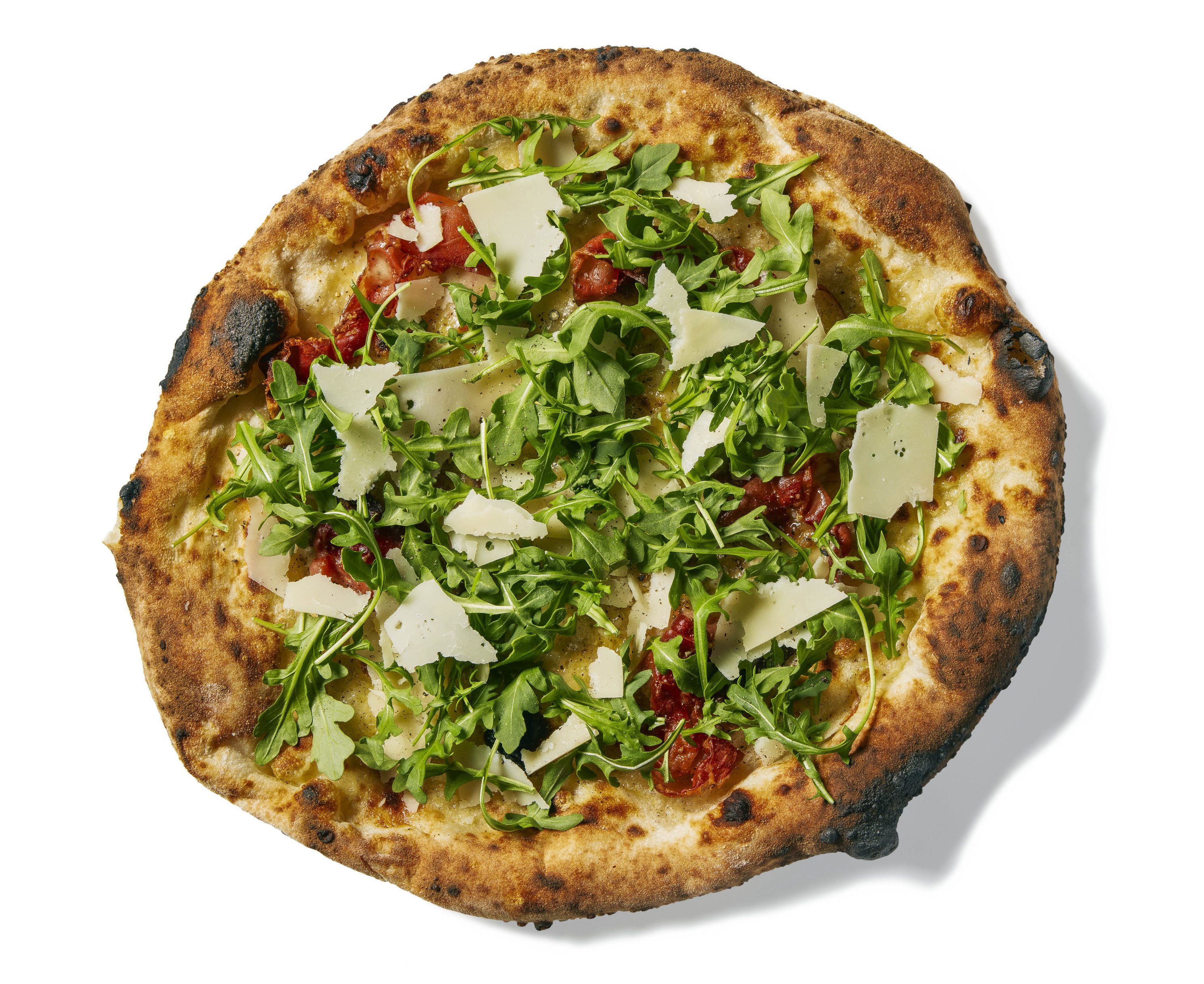 4 David Mattachioni’s been a sourdough savant since before it was cool, and his pies are all made with the same tangy levain, giving them a signature taste regardless of toppings. But beyond the crust, the key to this pizza is the liberal application of funky fontina to go with fresh mozzarella, folds of cured speck, peppery arugula and sheets of freshly shaved grana padano. $18. Mattachioni.com 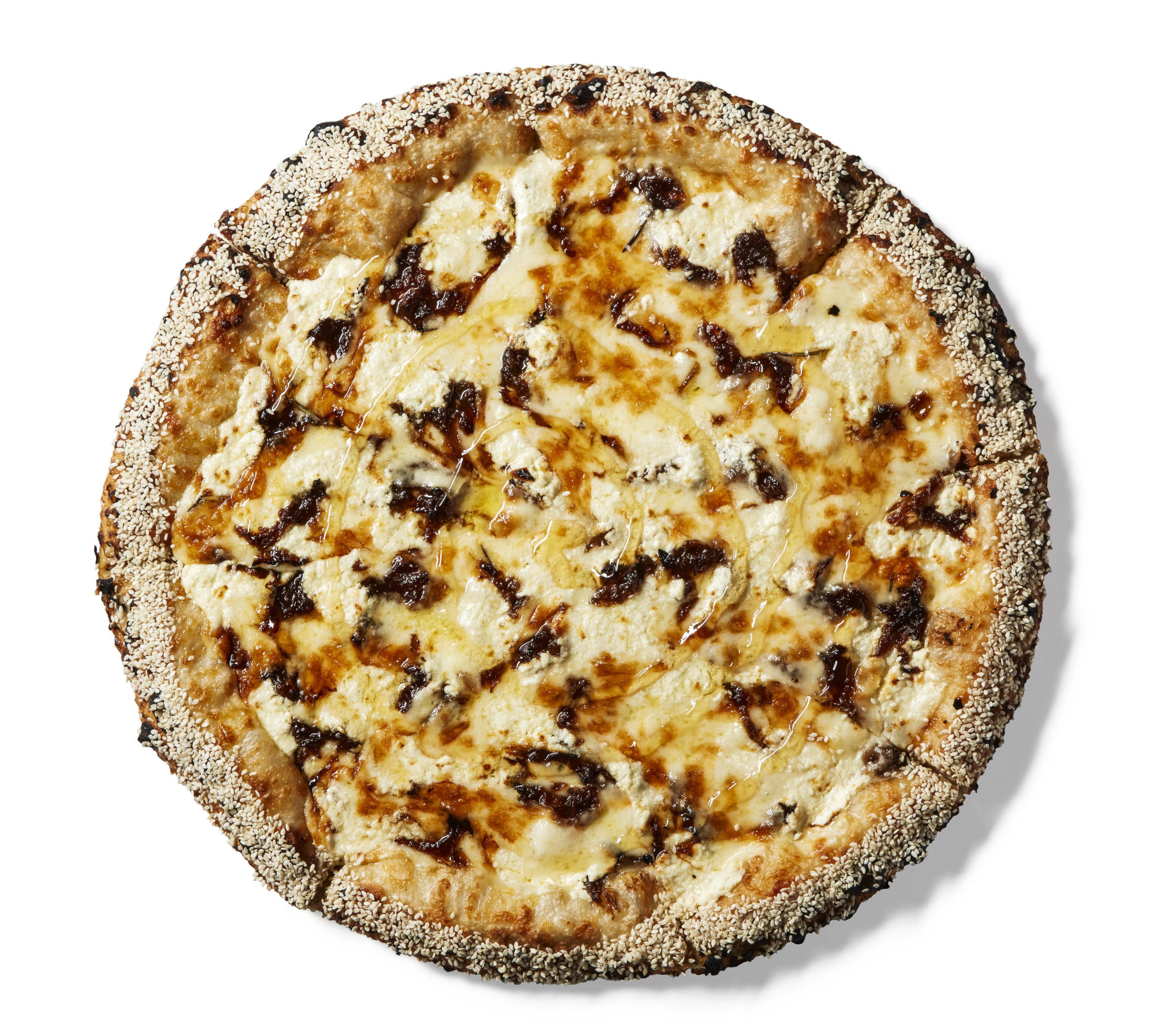 3 This most excellent pie is like a marriage between a pizza and a bagel, offering the best of both worlds. A dense and chewy crust coated in sesame seeds is topped with three cheeses (mozzarella, goat and parm), silky caramelized onions, roasted garlic, fresh rosemary, olive oil, sea salt and a honey drizzle. It’s deeply decadent comfort food— times two. $21-$31. Makerpizza.com 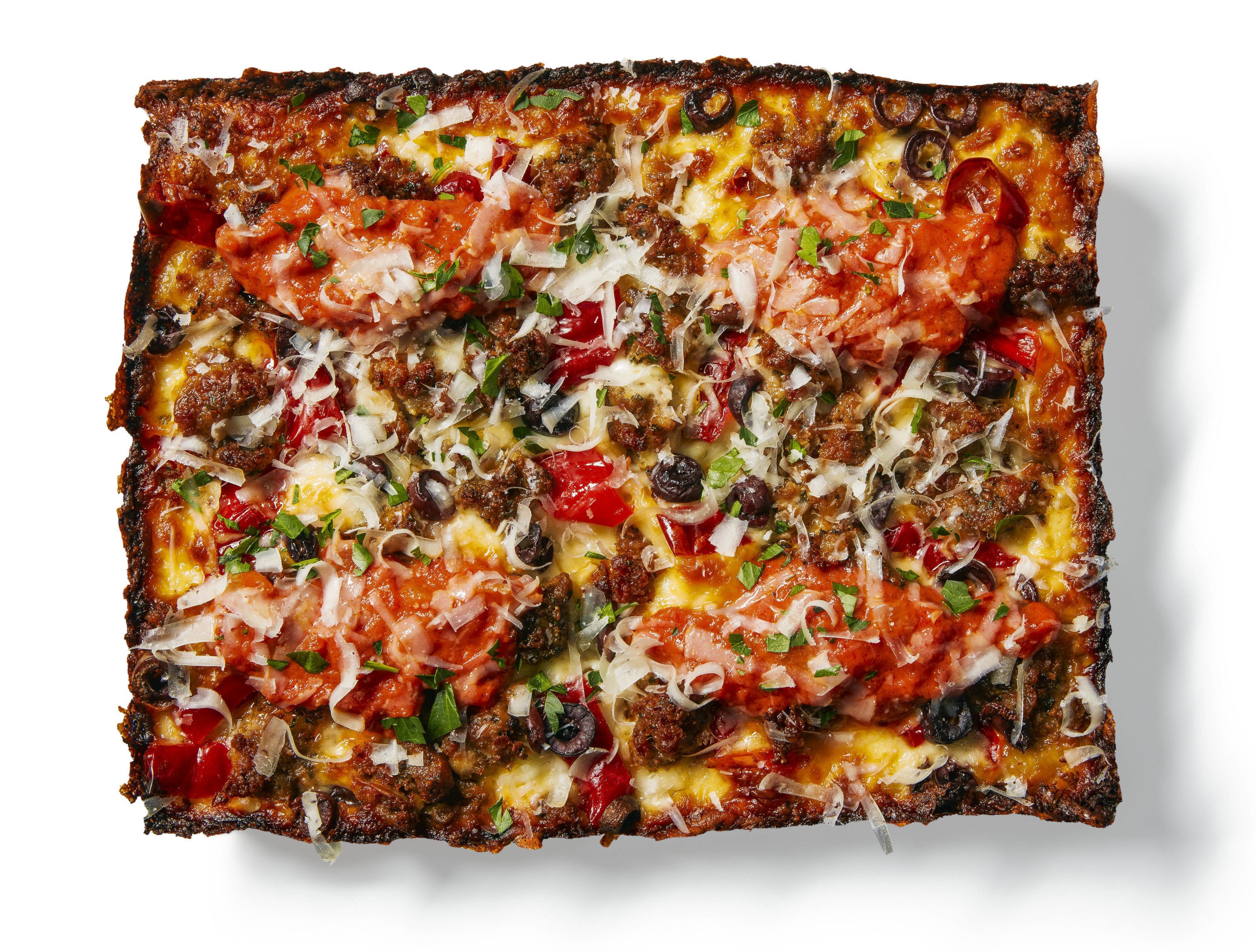 2 Our new favourite from this Leslieville institution is strewn with chunks of lamb-and-pork sausage, pickled goathorn peppers and balsamic-brined olives. It’s topped with heavy-handed dollops of creamy vodka tomato sauce, with the cheese baked right to the edge. $22-$35. Descendantdsp.com 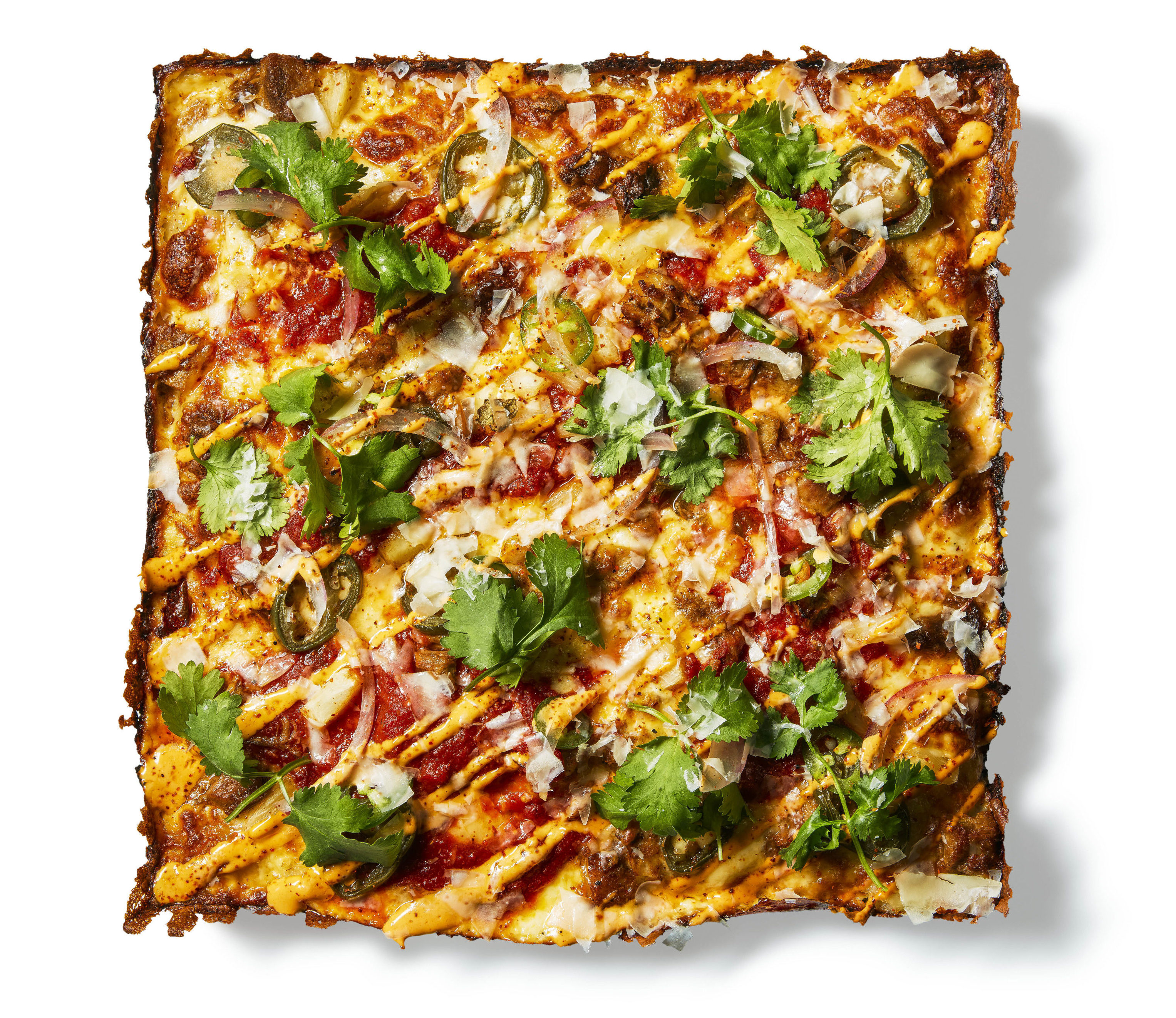 1 Victor Barry mastered Neapolitan pizza at Piano Piano. But he’s claimed the No. 1 spot with his fat Sicilian squares, built on an airy focaccia-like crust edged with crunchy frico—the result of cheese meeting the sides of a hot pan. This Hawaii-meets-Mexico stunner is topped with pork shoulder, compressed pineapple, mozzarella and grana padano, plus pickled jalapeños, cilantro, Tajín and mayo spiked with Valentina hot sauce. $33. Victorypizza.ca