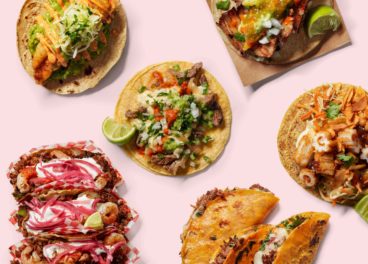 Real-deal tacos, made the hard way, with ancient family recipes, handmade tortillas and just the right toppings, are taking over Toronto. These are our favourites right now, from super-classic to ultra-trendy

1 At this five-year-old family-run taqueria, which lures guests with the savoury aroma of its sizzling plancha wafting onto St. Clair West, it’s seriously hard to choose a favourite taco. But the Volcan sits at the very top of the menu for good reason. With boldly seasoned steak, sweet strings of caramelized onion and a salty, stretchy layer of mozzarella hugging the inside of the warm, golden tortilla, it offers a practically symphonic taste of taco perfection in every bite. $6. 998 St. Clair Ave. W., @itacate_to 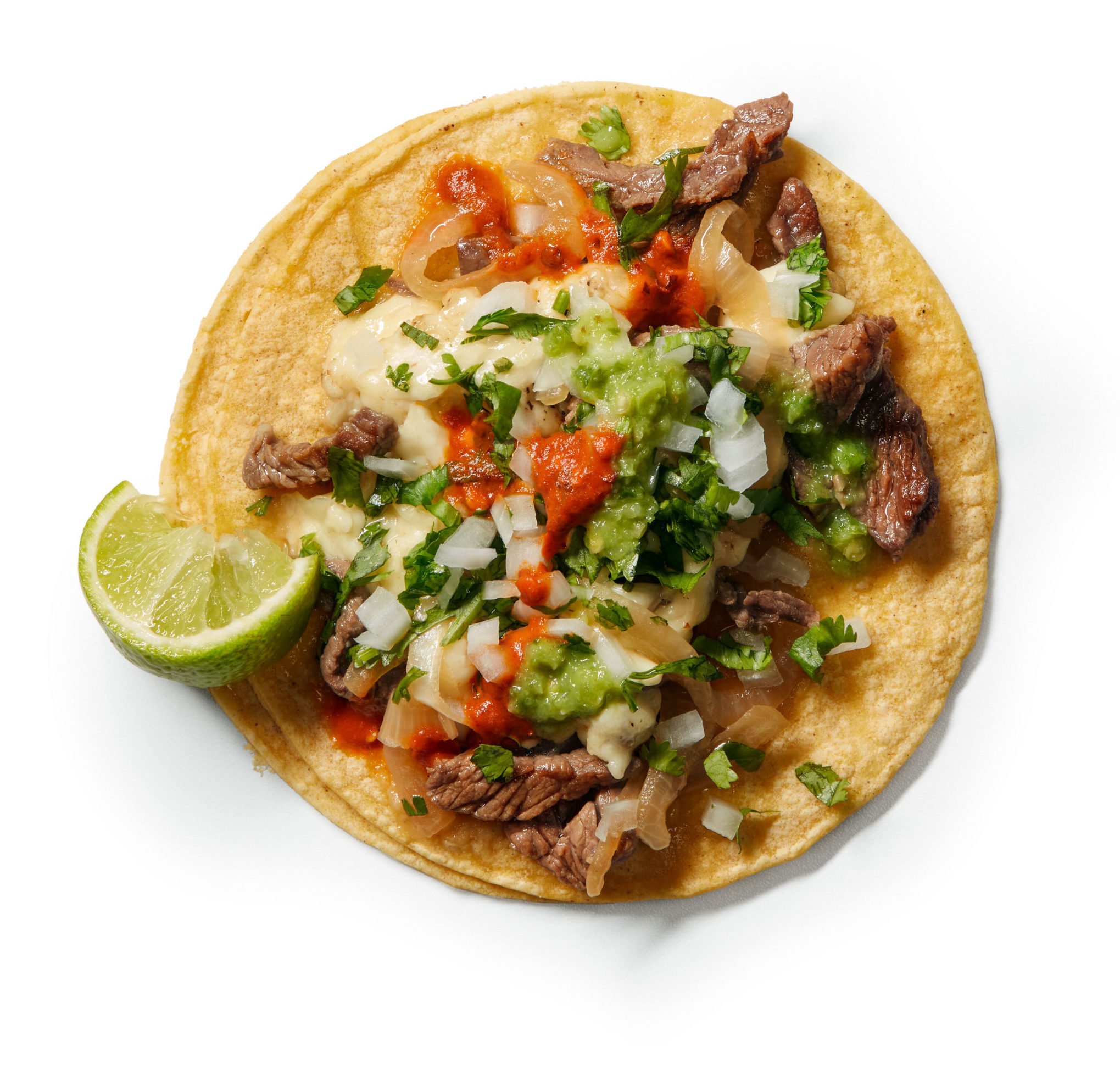 2 Fans of chef Julio Campos mourned when his downtown taqueria was kicked out by a condo development in 2018. But he’s back with a colourful Kensington Market takeout counter and a mostly unchanged menu. In the open kitchen, a trompo of vibrant-red al pastor pork slowly spins beneath its pineapple-onion hat. The pork shoulder shavings, swaddled in two corn tortillas, are finished with a dollop of avocado sauce, onion, cilantro and a fat wodge of fresh pineapple. $5.50. 178 Baldwin St., @tacos101_to 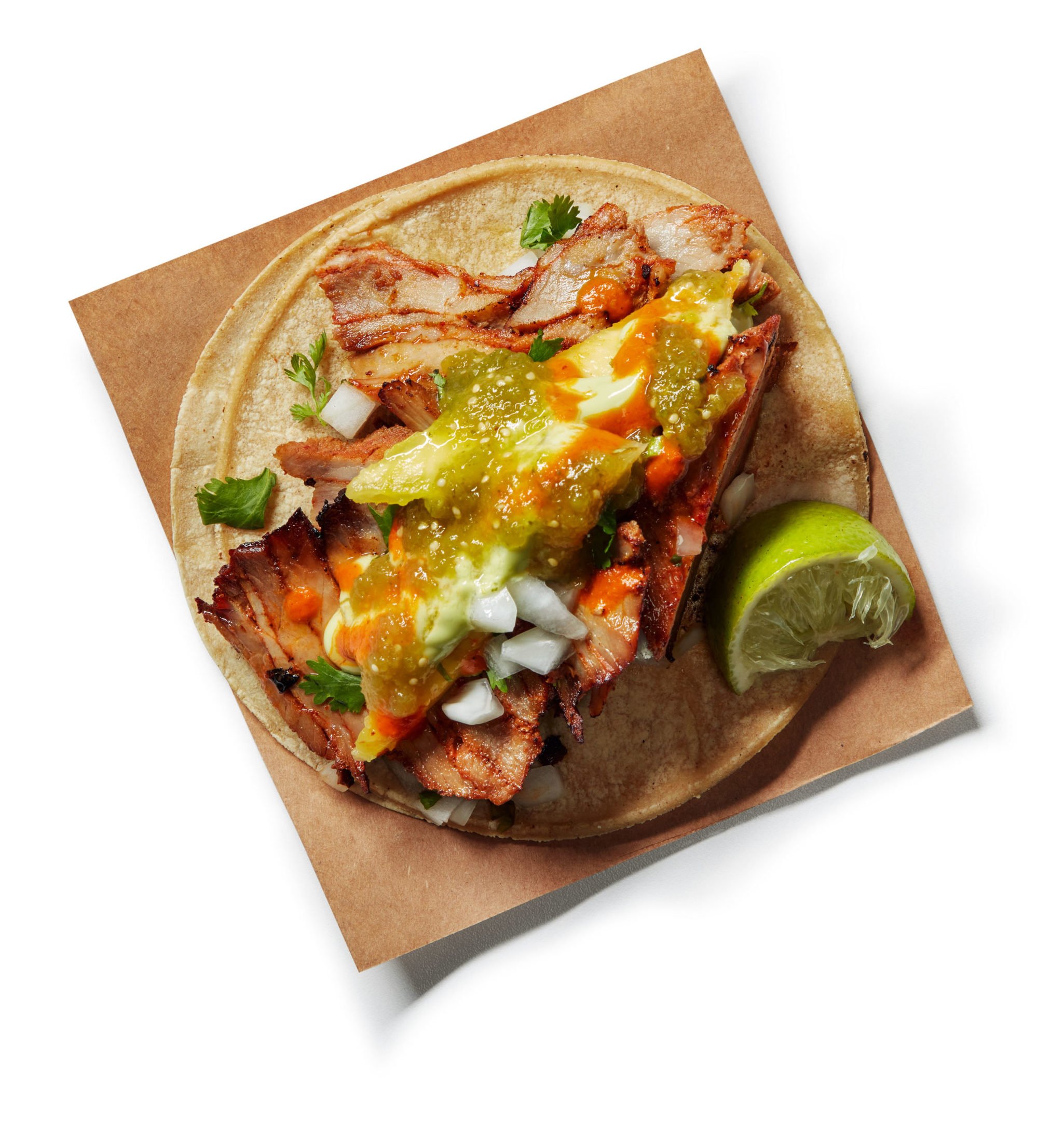 3 Kensington Market remains the seat of power for Toronto tacos, but several newcomers have changed the pecking order. Chief among them is chef Sergio Maldonado’s kiosk inside the 214 Augusta food court. Maldonado’s suadero tacos are his version of the Mexico City classic that is finally going mainstream thanks to Netflix’s Taco Chronicles. And what’s not to love? Chopped chunks of beef—like a cross between tender brisket and chewy flank—are lightly crisped on the grill and buried under an electric blanket of hot sauce, cilantro and raw onion on fresh tortillas. $12 for three. 214 Augusta Ave., pico-degallo.ca 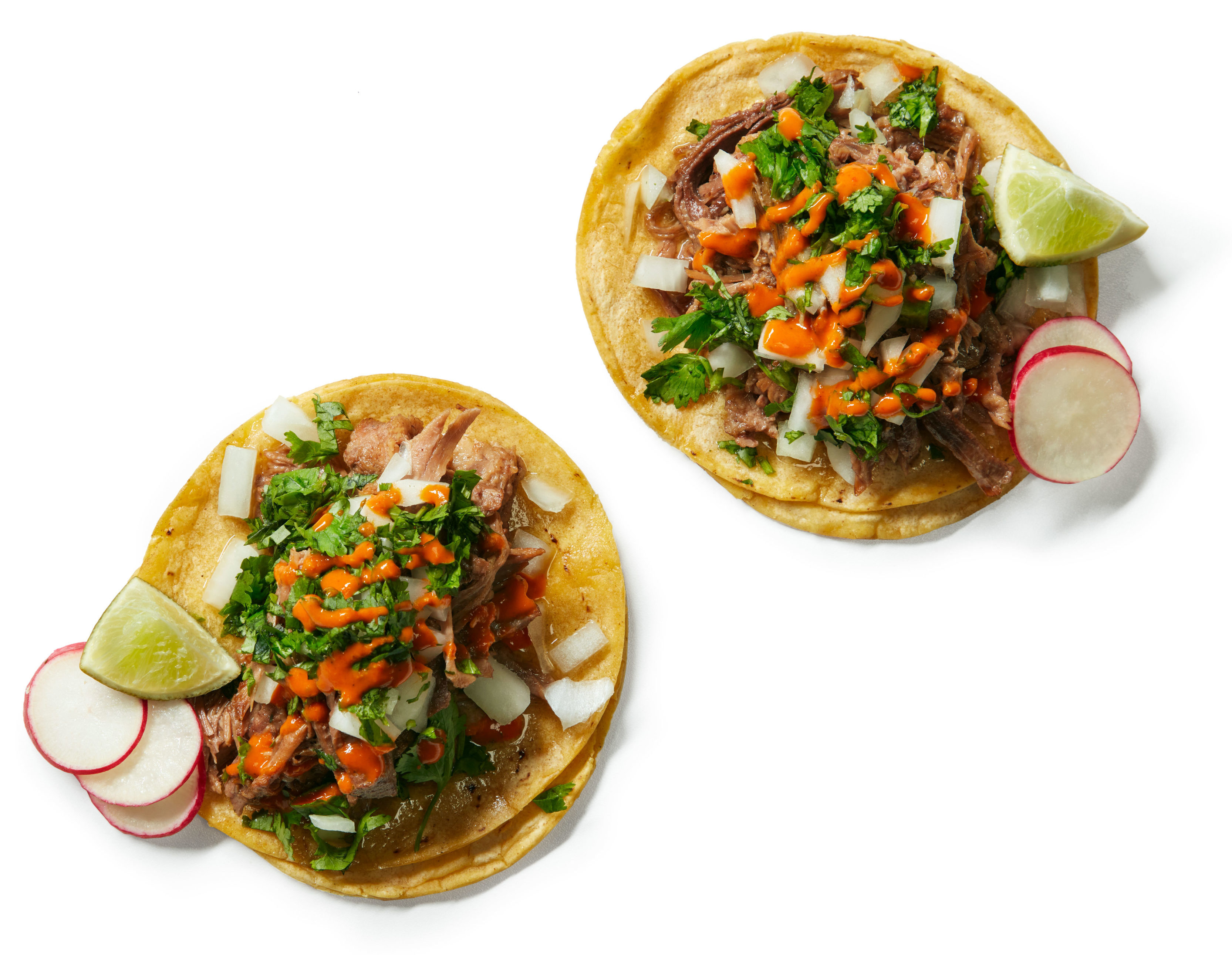 4 There’s no substitute for a fresh, handmade tortilla, infinitely more pliable and tender than its packaged counterparts, and they make them by the stack at this expanding mini-chain. But what fills those immaculate rounds is just as key. Our pick: the burnt-orange chilorio, a rarity in Toronto (and available only at Gus’s Kensington location) that’s like an indie cousin to big-name carnitas, with pork simmered in chilies before piling onto those tortillas in a blaze of napkin-staining glory. $5. 225 Augusta Ave., tacosgus.ca 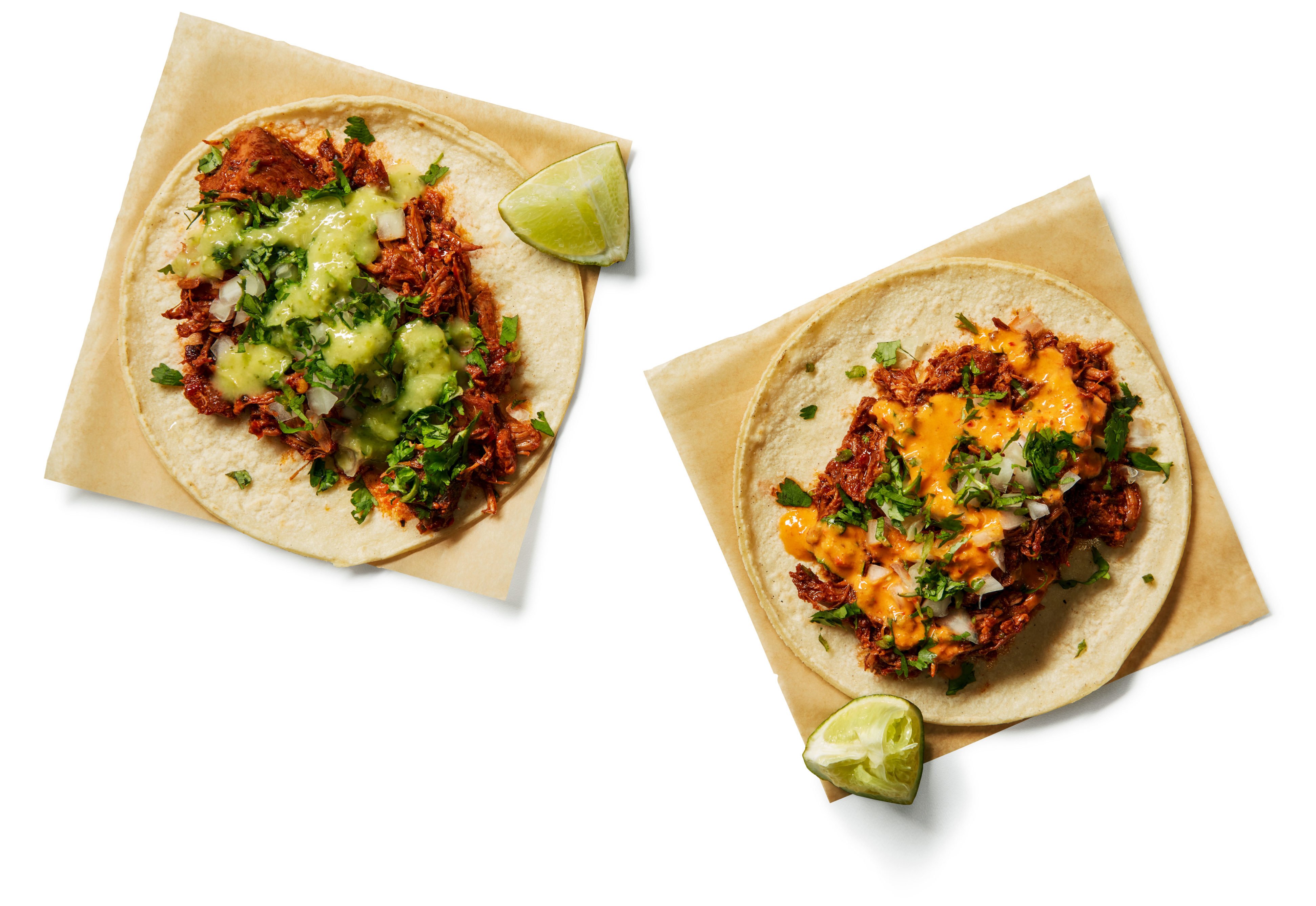 5 The birria taco is everywhere these days, riding a wave of popularity driven by the irresistible urge to dunk the beef-filled tortillas into their own hearty braising liquid, like a roast beef au jus but more eye-popping. At this collaboration between Matty Matheson and Mexican cuisine savants Julio Guajardo and Kate Chomyshyn, the birria tacos come either crispy or soft. We like the “suave” version, on tortillas from the excellent tortilleria Maizal, which fully allow the slow-simmered meat and its accompanying consomé to be the star of the show. $18 for three. 147 Spadina Ave., birriabalam.com 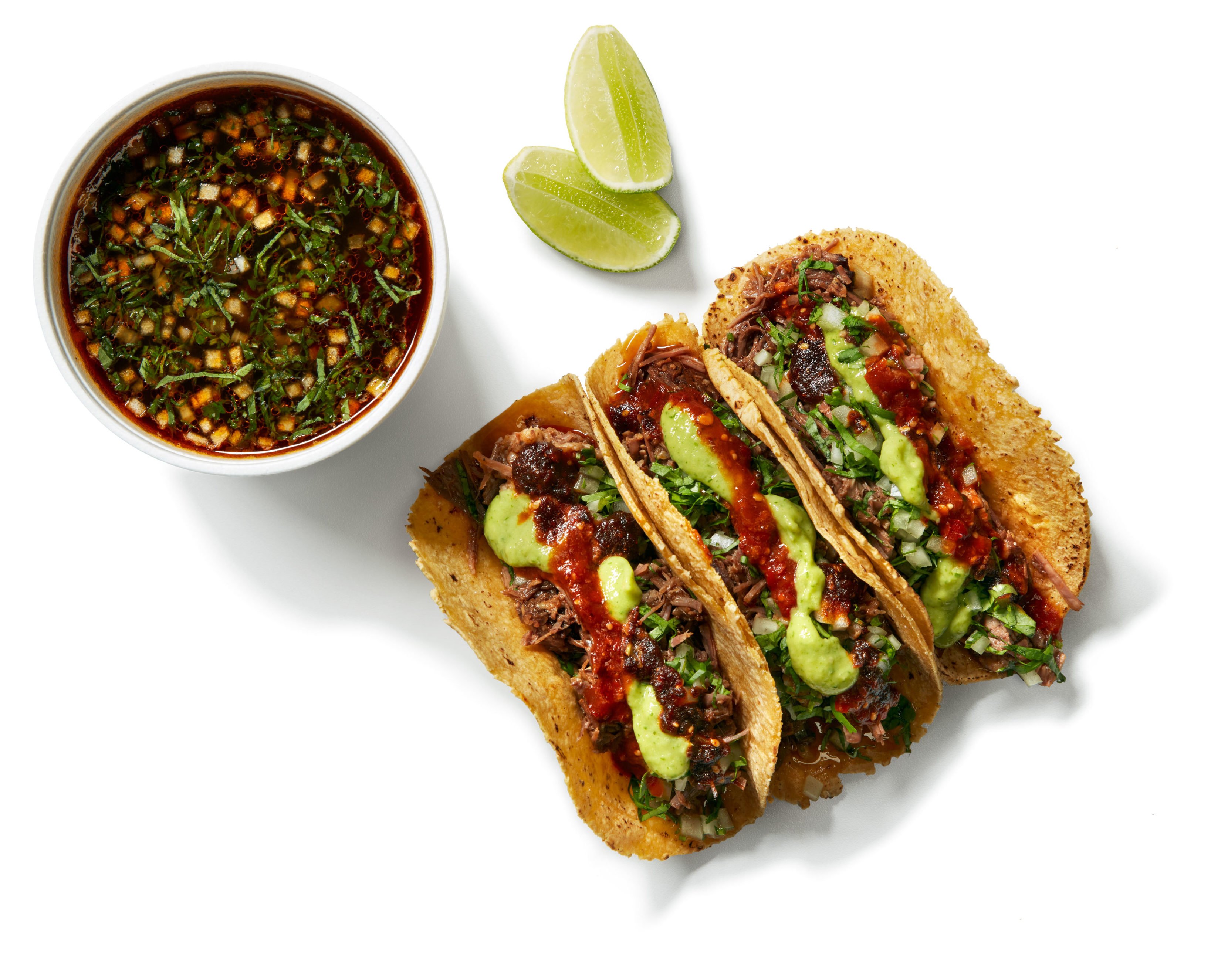 6 Birria isn’t the only taco in town with serious consomé cred. The two-ply corn tortillas filled with crazy-tender lamb at this Koreatown staple are delicious on their own, but even better when dunked in the bowl of savoury drippings that accompany them. Because the meat cooks overnight, barbacoa is traditionally a breakfast taco of sorts, meant to alleviate aches and pains after a night of partying. But no matter the time of day, this combo will cure whatever ails you. $17.70 for three. 689 Bloor St. W., tacoselasador.ca 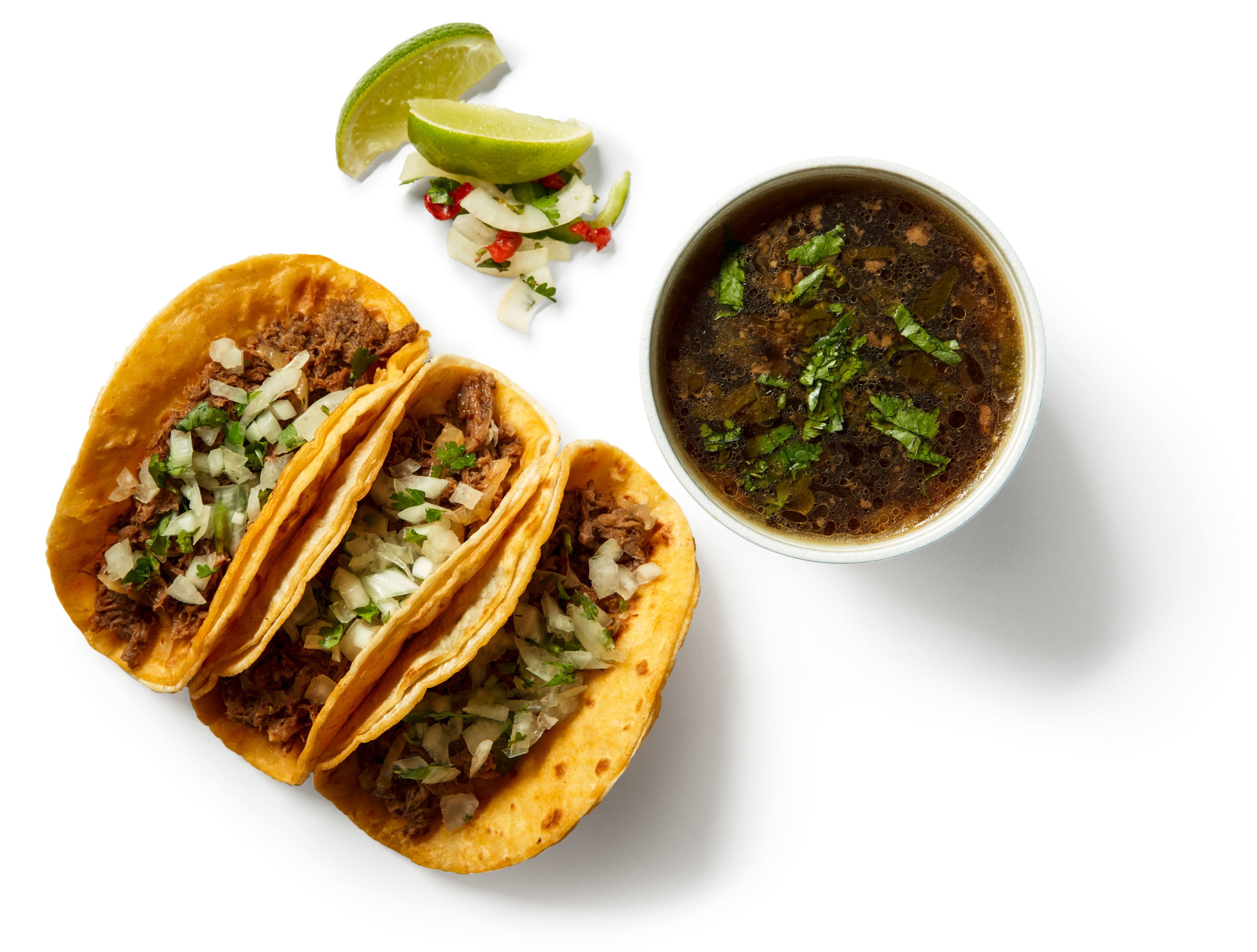 7 Few taco fillings are as ubiquitous (deservedly) as carnitas, and few carnitas tacos are as painstakingly prepared as Yasmen De León’s at her taqueria near Jane and Lawrence. She slow-simmers snout-to-tail cuts of pork in a citrusy broth sweetened with a splash of Mexican Coke, evaporated milk and a strict selection of herbs—Italian oregano simply won’t do. The result is the richest meat imaginable—a big squirt of lime and a heavy dab of salsa are your amigos here—on hot, handmade tortillas. $15.50 for four. 1692B Jane St., comalycanela.com 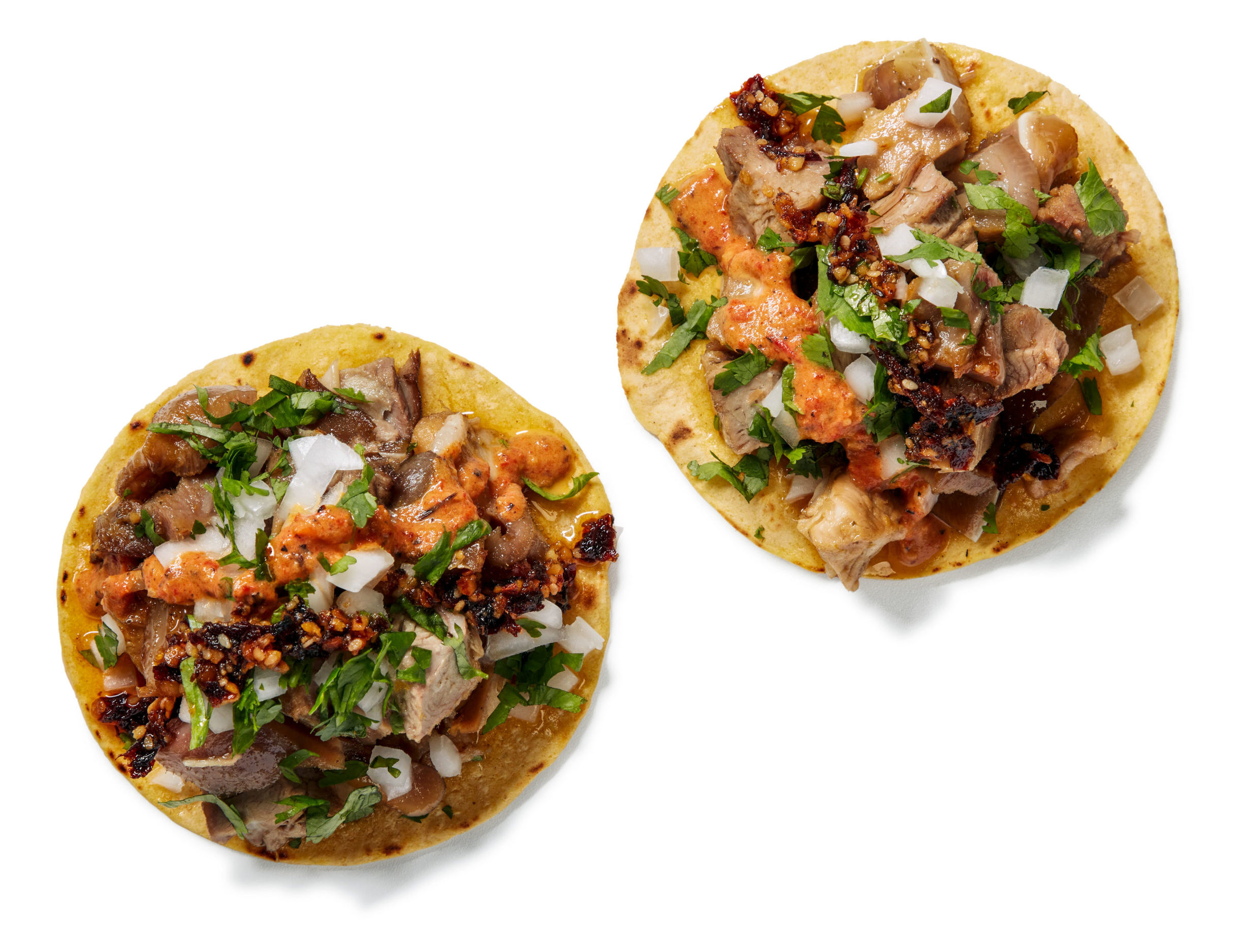 8 Tacos in the style of Mexico City or Tijuana tend to dominate Toronto taqueria menus. More rare are tacos from Yucatán, once an ancestral seat of Mayan power, and the culinary inspiration for this sui generis kiosk serving Mayan fare. Cochinita pibil is the region’s signature dish, traditionally a suckling pig slathered in peppery achiote paste and cooked in a hole in the ground. Kensington Market may be slightly less accommodating for cooking in a hole, but the result is no less impressive here. The tacos come adorned with a fat slab of fresh avocado and shards of spicy pickled onion, each one like a tiny bomb going off on your tongue. $5. 214 Augusta Ave., kooxhanarestaurant.com 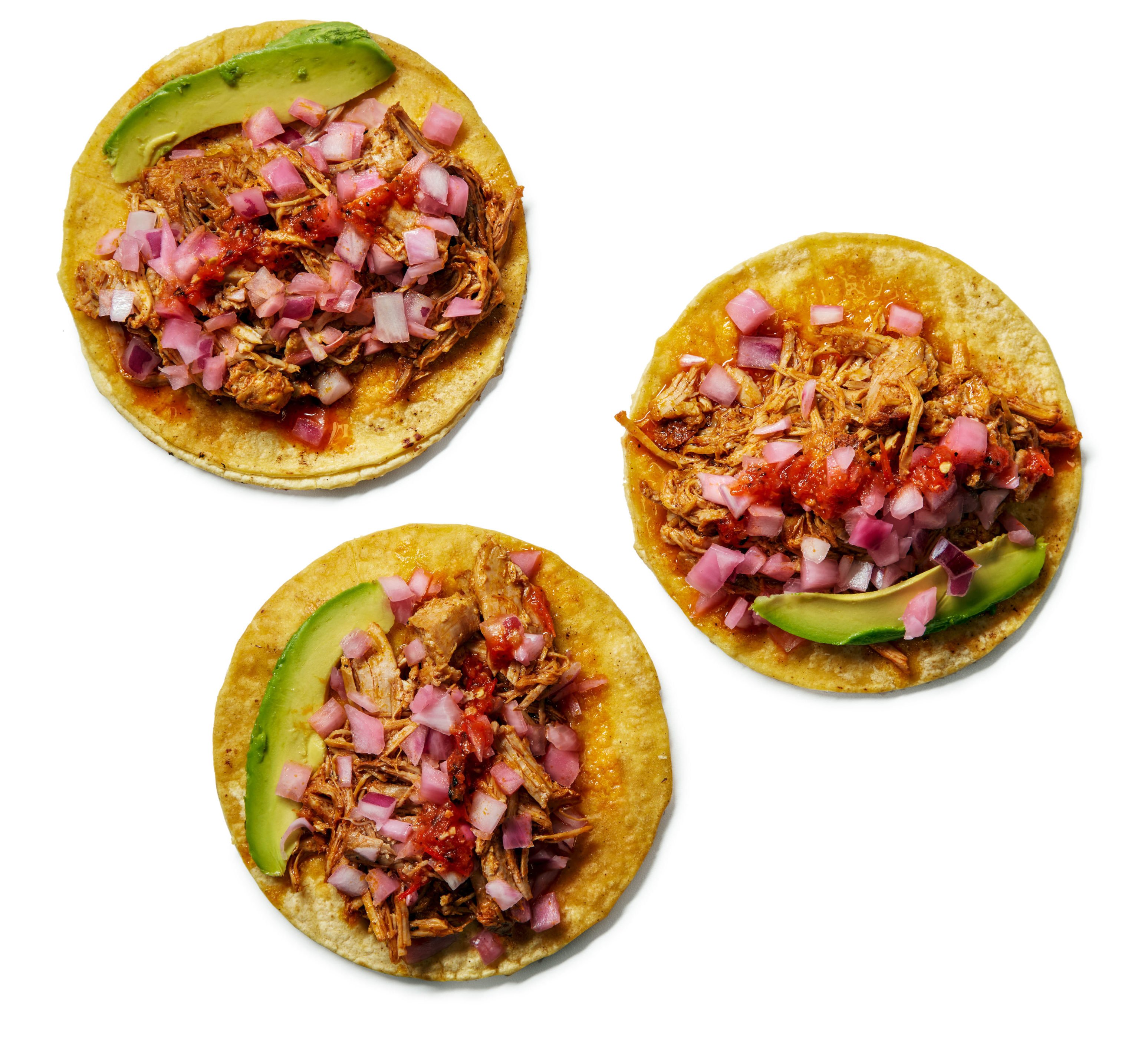 9 Dating back to her Los Colibris days, chef Elia Herrera has long been one of Toronto’s best practitioners of Mexican cuisine. At Colibrí inside (formerly Assembly) Chef’s Hall, she makes this plant-based riff on Mexico’s most popular taco, marinating button and oyster mushrooms in a chili-packed al pastor adobo sauce and layering them with refried beans and pineapple pico de gallo on one of the fresh, handmade corn tortillas for which she’s renowned. $7.50. Chef’s Hall, 111 Richmond St., @colibritoronto 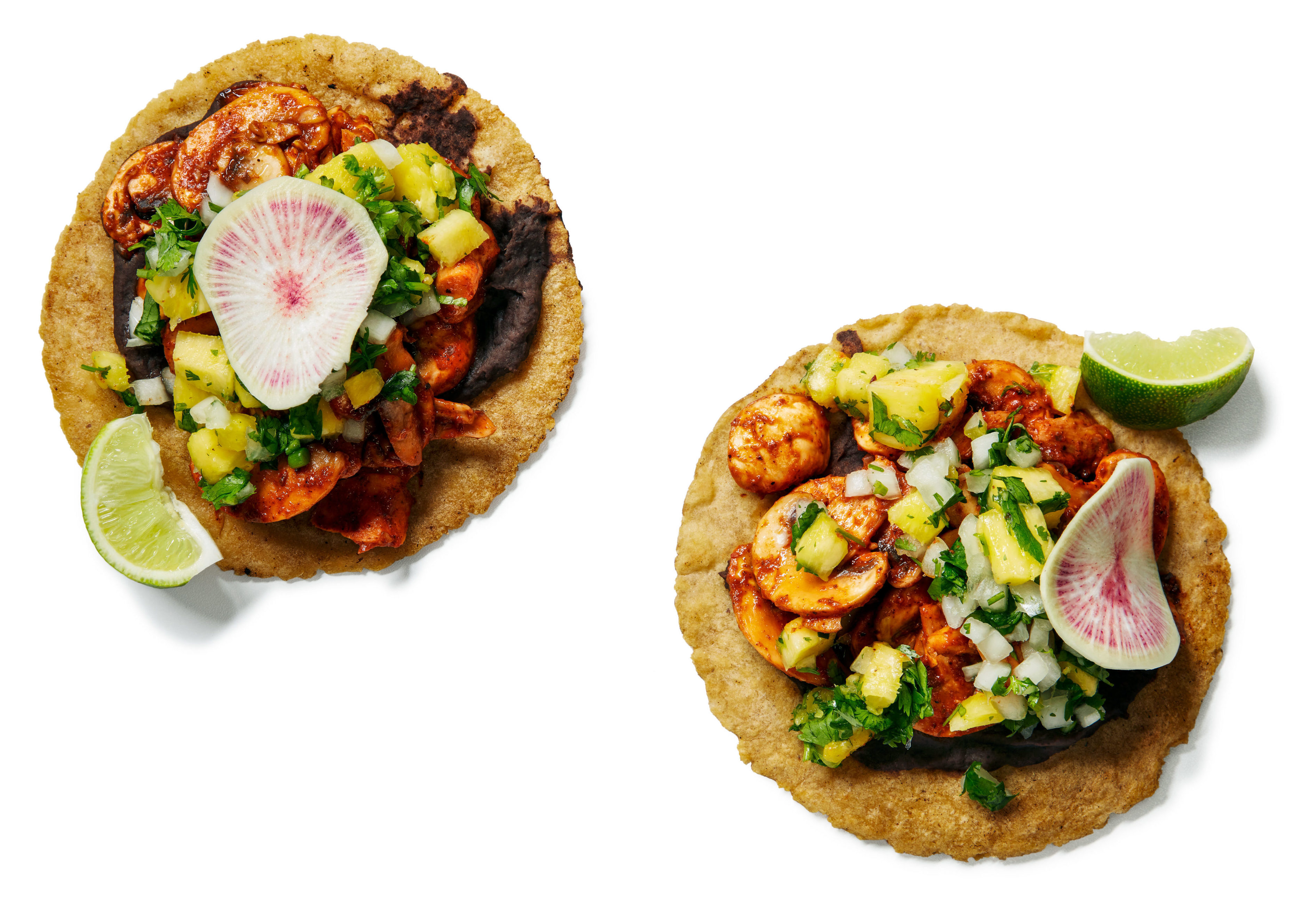 10 This pandemic-born project specializes in Tijuana-style birria. Chef Aldo Lopez marinates his cuts of beef for 24 hours before an eight-hour simmer. The meat is then shredded and folded, juices and all, into lightly crispy fried tortilla shells stuffed with cheese. This is all to get ready for the money shot: a swift dunk in the accompanying bright-red consomé, humming with a tightly guarded blend of 18 chilies and spices, which demands to be slurped down even after the tacos are (inevitably) all gone. Prices vary. Pre-order for weekend pickup near Dundas and Jane, @tacosmariabonita_to 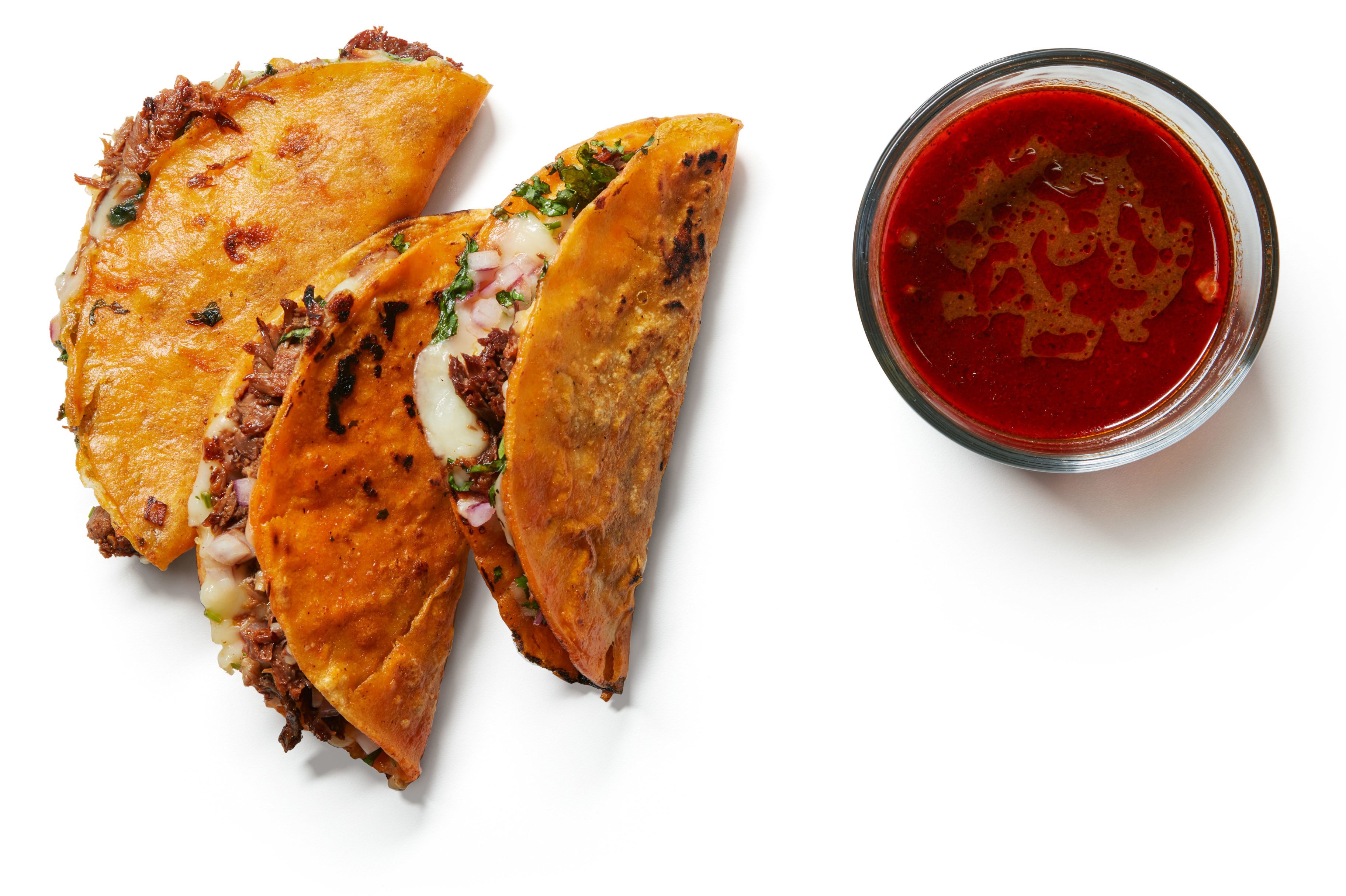 11 Eating takeout in the car became a staple of pandemic life, and with very little seating to speak of at this York-area counter-service taqueria, it’s likely the best option—despite the inherent messiness of tacos. But upholstery be damned, these carne asada tacos practically demand to be inhaled. The strips of steak, pan-seared to order, are piping hot and imbued with an otherworldly juiciness and umami that touches the top of the addictiveness scale. It’s hard to eat just one—good thing they come as a trio. $14 for three. 126 Rogers Rd., rebozostaqueria.com 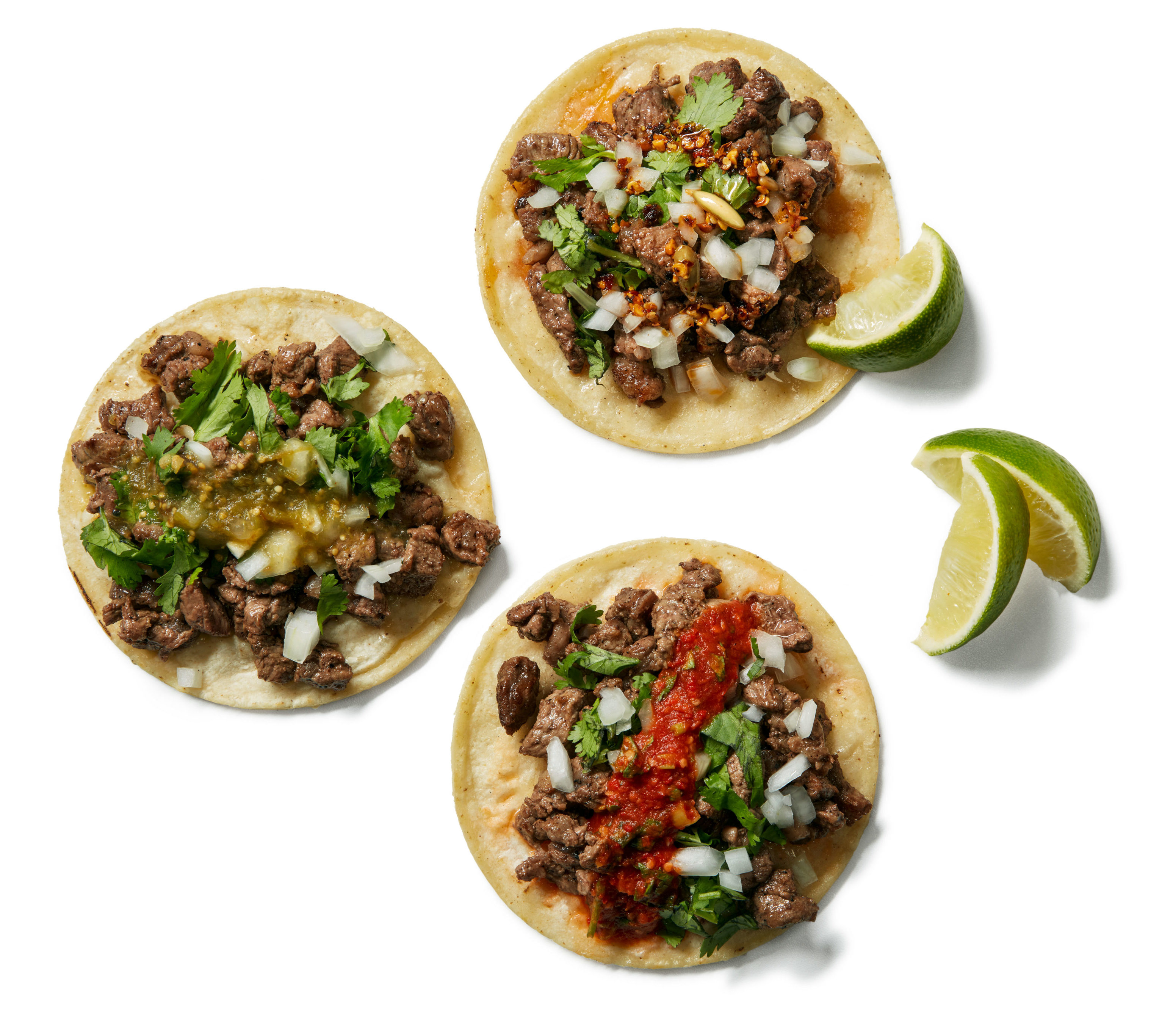 12 If it’s an elevated take on a taco you’re looking for, head to Kensington Market’s mezcaleria, where chef Rodrigo Aguilar turns out tacos with fillings like duck carnitas, salmon and sikil pak salsa, morita pepper–spiced Nordic shrimp and—our favourite, which also happens to be a menu mainstay—crispy squid. The cephalopod itself, dressed in a sweet-and-sour tamarind salsa, is oh-so-tender; the crisp factor is thanks to the crunchy spiced coconut flakes on top. Add a squirt of lime and go all in with the house hot sauce. (Your server might warn you of its heat, but that’s what the cocktails are for.) $10.76 for two. 2A Kensington Ave., elreybar.com 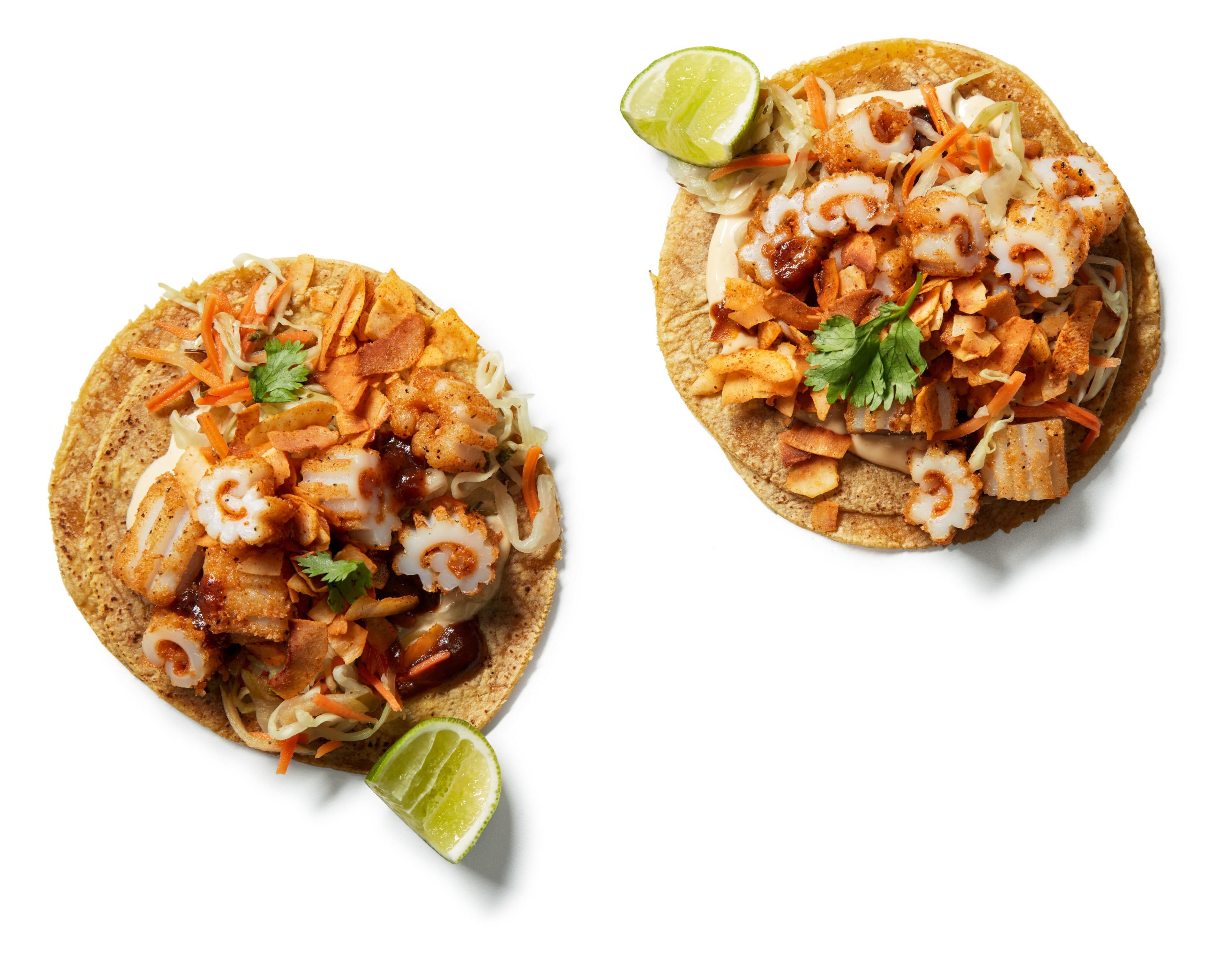 13 This popular Kensington Market taqueria doesn’t call itself the “Home of the Gobernador” for nothing. Forget everything you’ve heard about that whole seafood-doesn’t-go-with-cheese rule. It’s simply not true. The fan-favourite taco coats one of its two corn tortillas with a blanket of melted queso before cramming it full of smoked blue marlin and chubby shrimp, then topping it all off with pickled onions and a lashing of crema. It might seem like an unholy marriage to some, but we give it our full blessing. $8. 72 Kensington Ave., sevenlivesto.ca 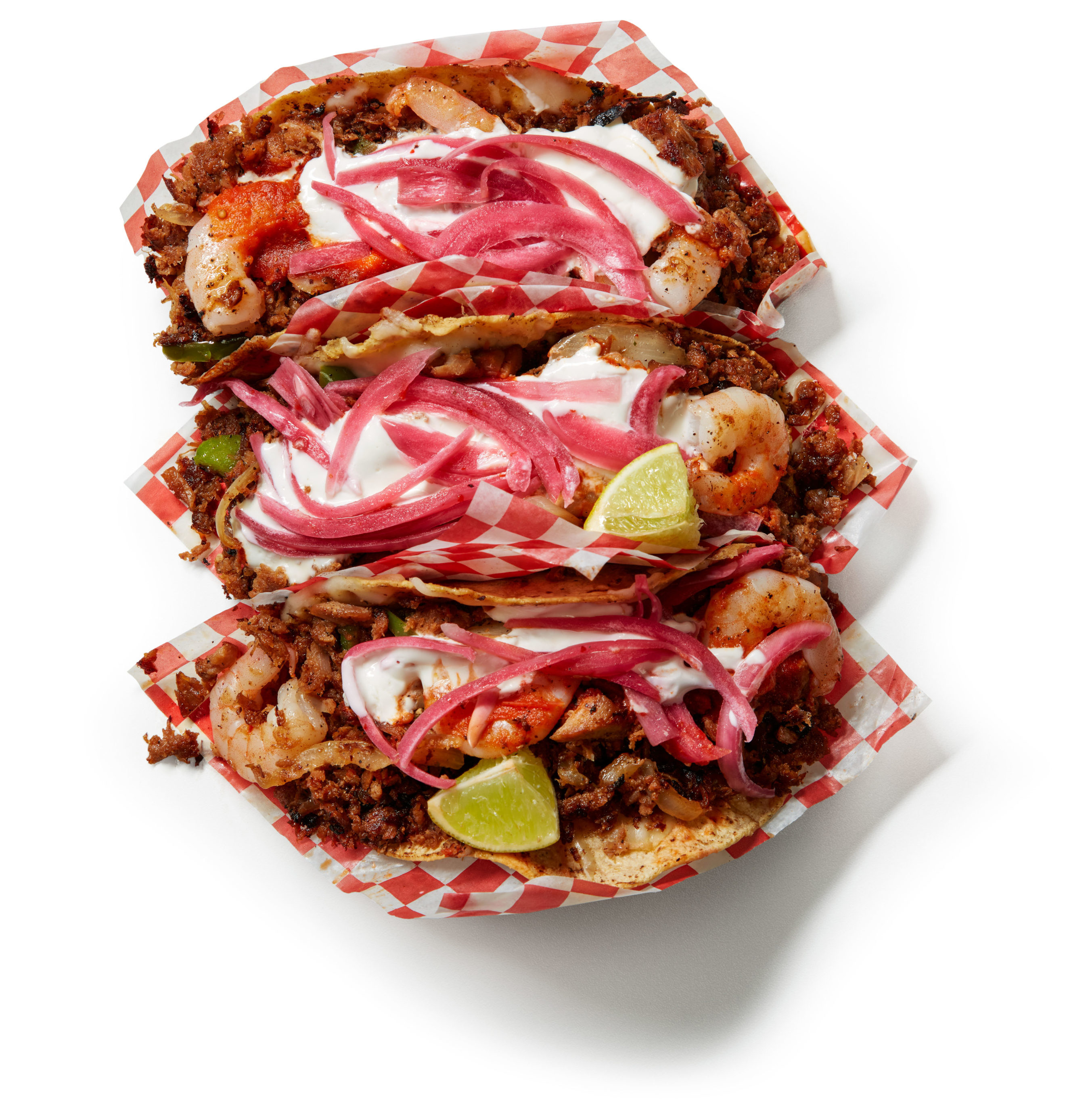 14 For a top-quality beef taco, pop by the patio of this Fashion District taqueria for the costilla. Chunks of super-tender and just-the-right-side-of-fatty triple-A ribeye are loaded into one of the restaurant’s griddled-to-order tortillas and drizzled with some salsa macha to cut through the richness of the meat. Know what else cuts through it just as well? One (or three) of their straight-up margaritas, that’s what. $9. 504 Adelaide St. W., campechano.ca 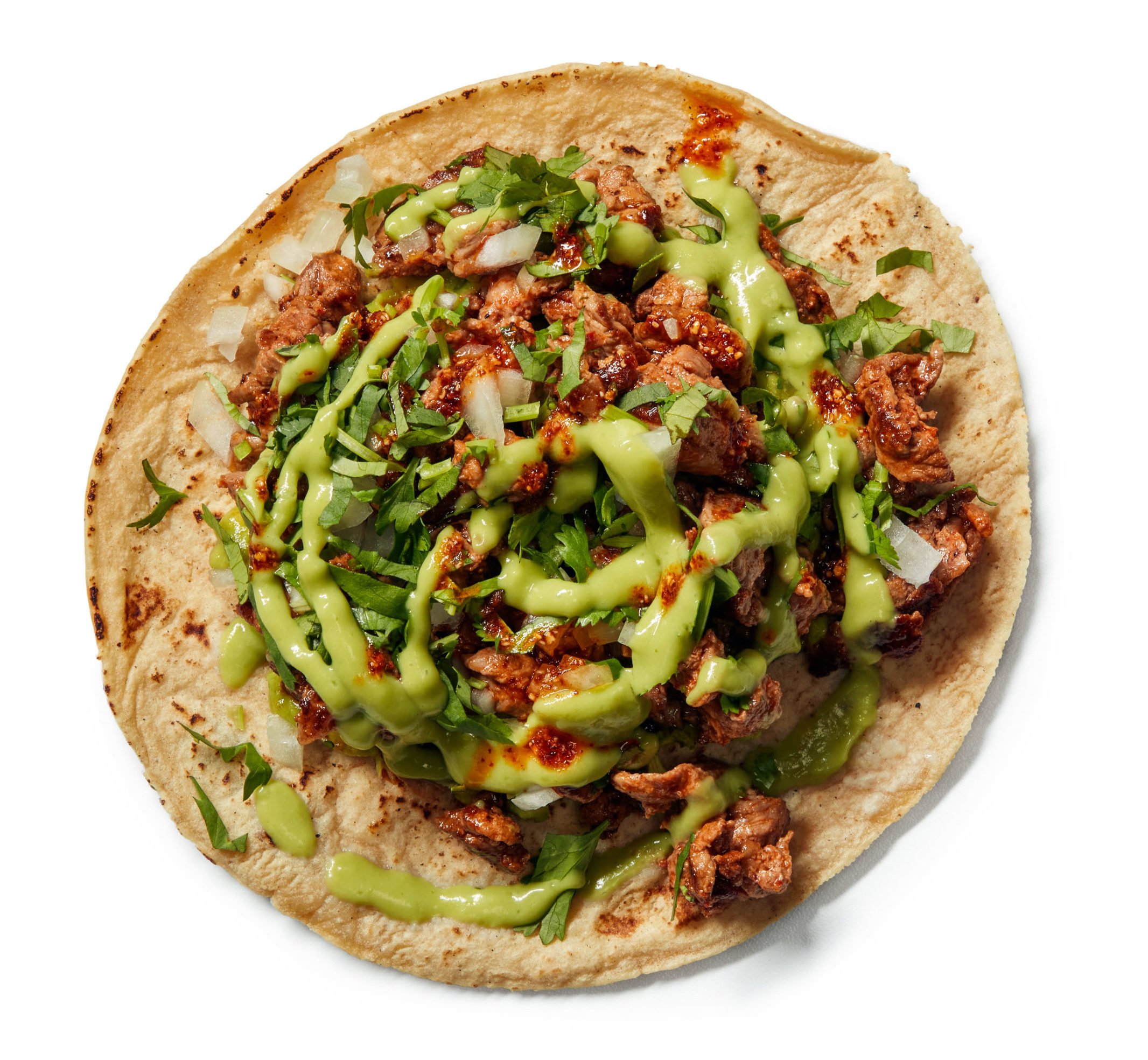 15 When you’re in the mood for Old El Paso that’s a little bit extra, make a run to this east-end Latin American spot. They pack a trio of crunchy house-made hard shells with veggie patties that took chef and co-owner Matias Balmaceda three months to get just right (but if that’s not your thing, there’s steak or chorizo, too). The tacos are supremely sloppy in the best way, loaded with a riot of toppings: refried beans, tomato-cilantro salsa, guacamole, jalapeño-lime crema, house hot sauce and a mountain of shredded cheddar. Consider your shirt choice carefully. $9.50 for three. 5 Coady Ave.; 337 Broadview Ave.; completo.club 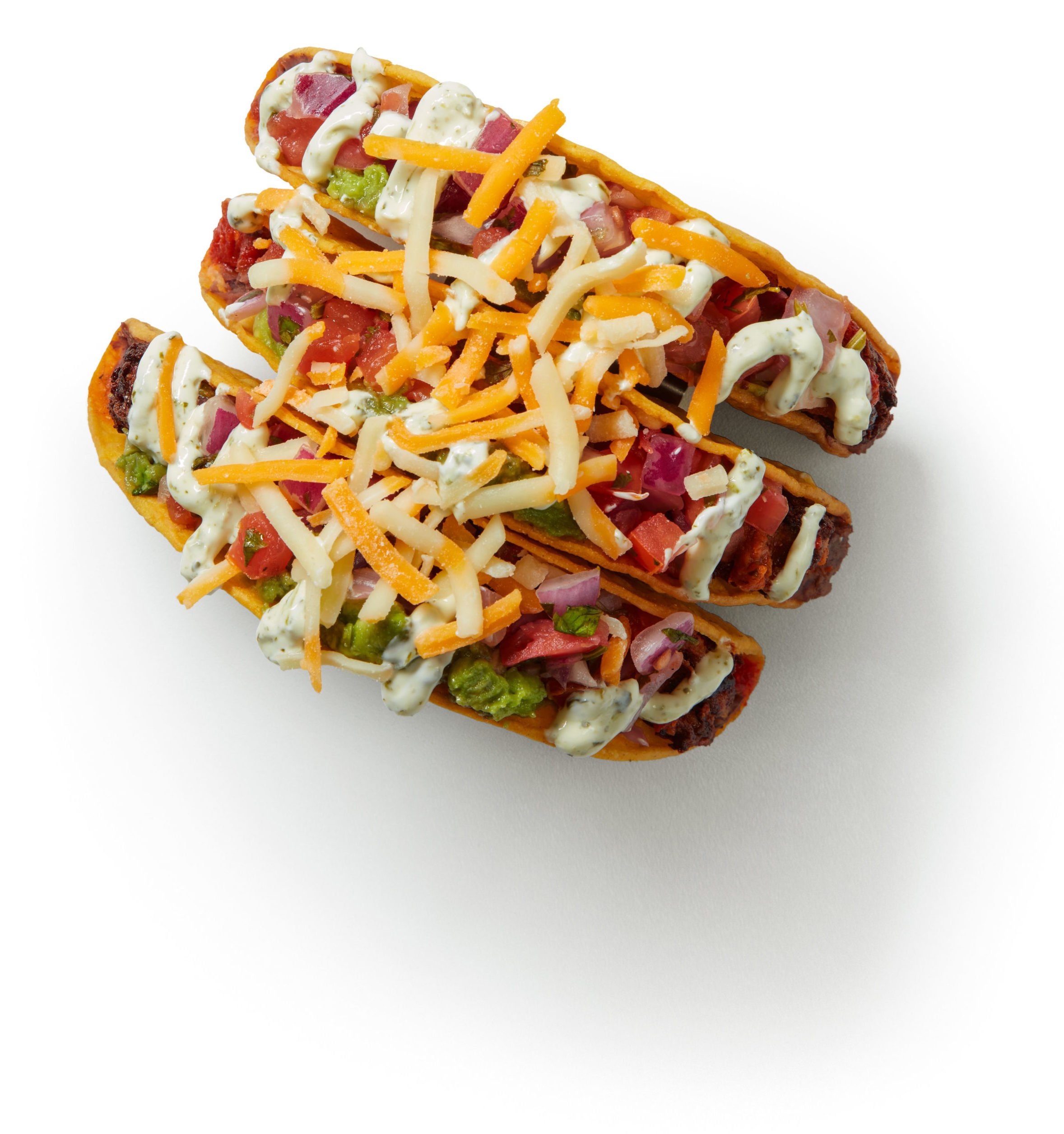 16 A Baja fish taco is a Baja fish taco. Right? Wrong. It’s all about that batter—and Good Hombres, the sister spot to Campechano, nails it. Their pescado taco coats flaky haddock in a crispy, tempura-like beer-batter jacket, which means the flavour of the fish isn’t lost in the fryer. It’s wrapped in a silky-smooth tortilla made in-house using heirloom Mexican corn, and topped with shredded cabbage, plus squiggles of avocado purée and chipotle mayo. $4. 374 Bathurst St., goodhombres.ca 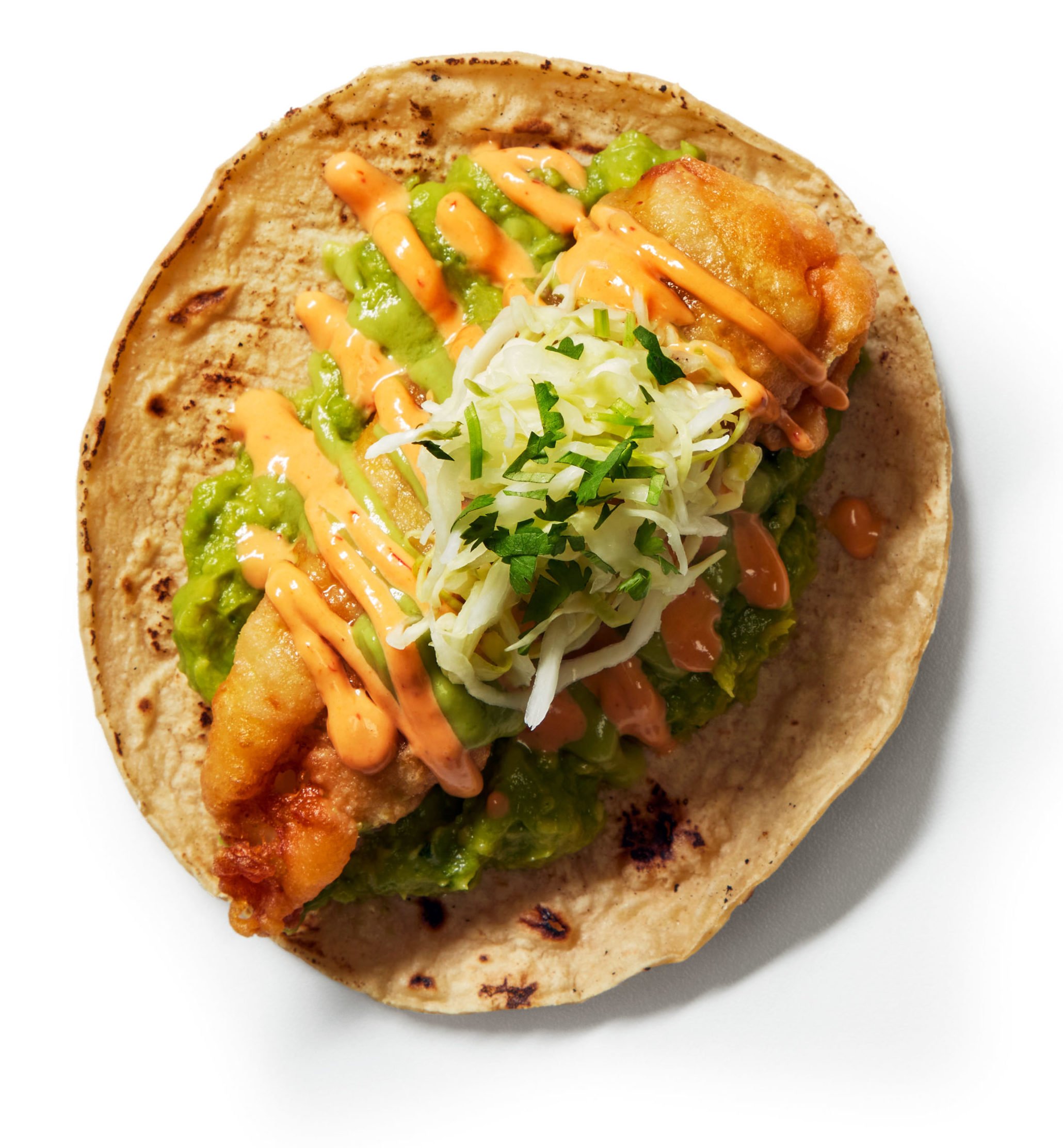 17 It’s been almost a decade, but Parkdale’s trendsetting taqueria is still going strong, and its short menu of tacos and bourbon-based drinks remains mostly unchanged (save for the advent of breakfast burritos). For their take on tinga, juicy chunks of arbol chile–marinated chicken thigh are piled onto an organic corn tortilla then topped with crumbles of salty queso, tangy pickled onions, cilantro and—to temper the spice—a cooling, raita-like cucumber yogurt. $5.50. 1330 Queen St. W., grandelectrictoronto.com 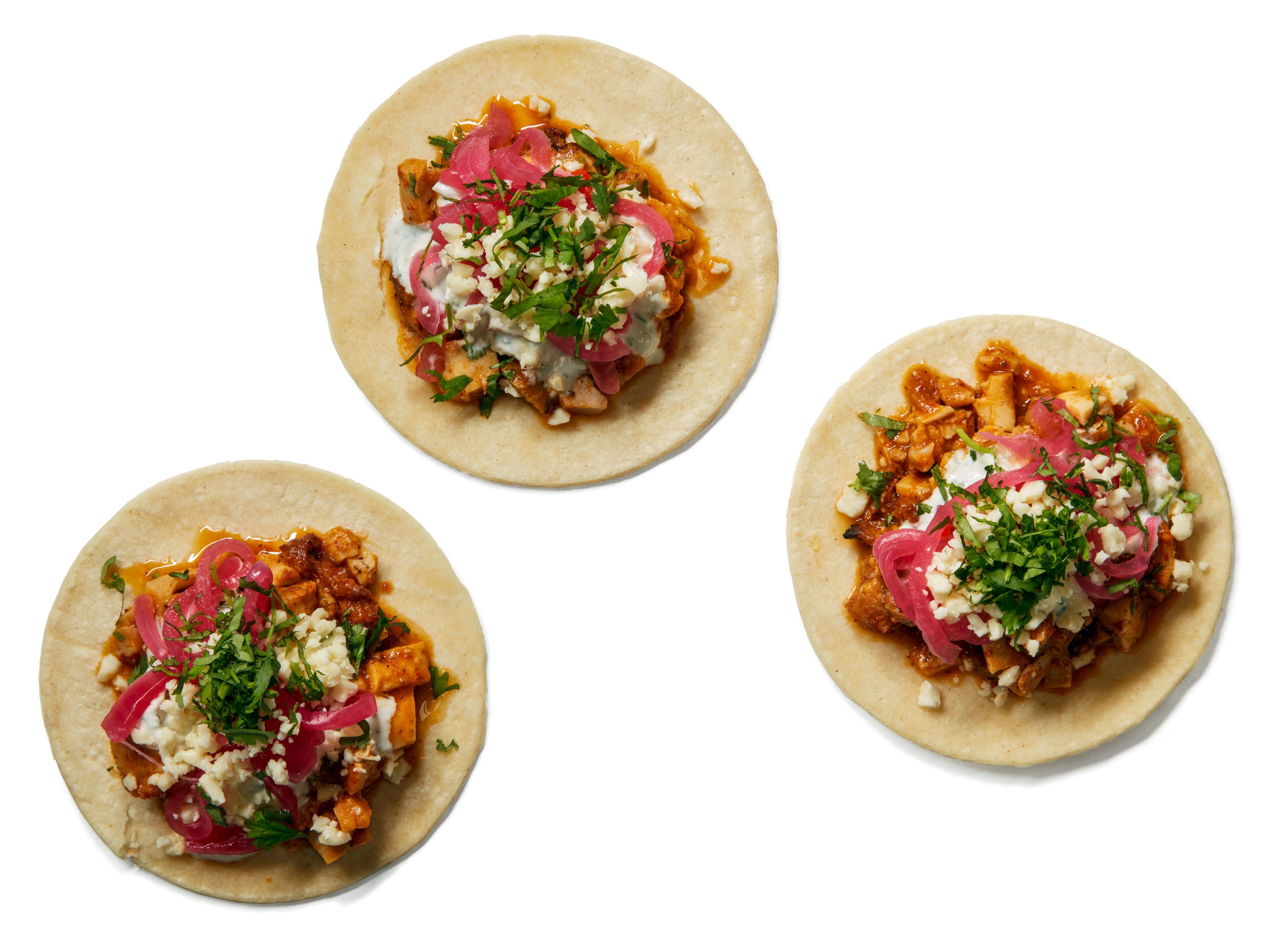 18 There’s so much going on at this taqueria-slash-Mexican-pantry that it’s easy to get distracted10 times over before making it to the counter at the back. Place your order for tacos—they come in fours, so arrive hungry—then do some light shopping while you wait. The tacos are classically simple here: corn tortillas topped with your protein of choice (we like the kicky chorizo), diced onions and cilantro, and served with a trio of salsas and some complimentary chips so crunchy they shatter on contact. $10.99 for four. 1229 Bloor St. W.; 1028 St. Clair Ave. W.; latinworlddelivery.ca 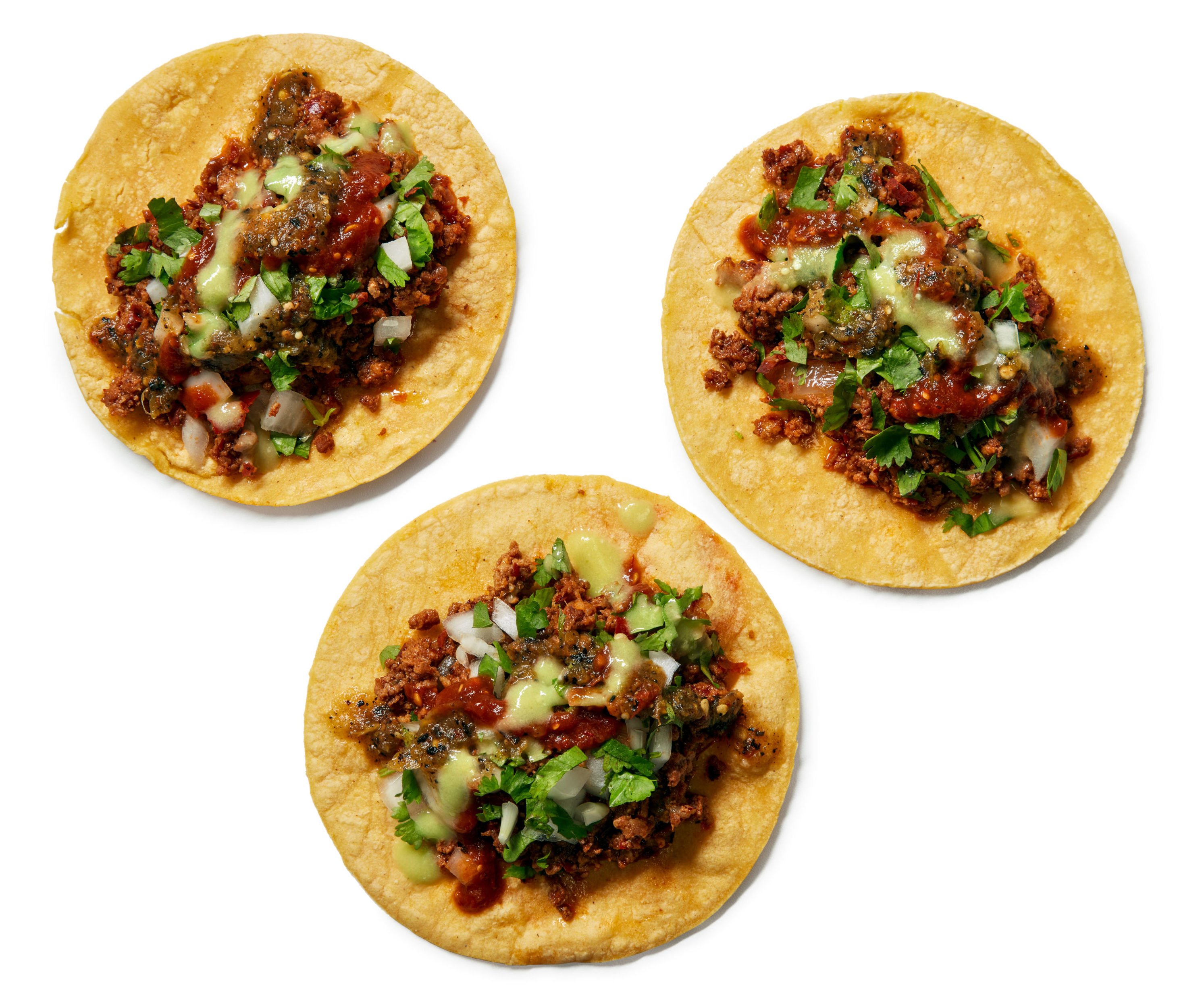 19 Before launching the excellent (and expanding) Gus Tacos in 2019, those same taqueros got their start with this Kensington Market kiosk a few doors down, and quickly earned a following for their simple yet exacting menu of classic street-style burritos and tacos. The carnitas taco is a no-doubter, especially when it’s lashed with the house-made hot sauce. And for even more heat, their signature La Chilaca taco tops the carnitas (or another meat of your choice) with a whole, cheese-stuffed pasilla pepper as long as a cigar, the hot-and-fast heat of the pepper cutting right through the richness of the meat. $5. 214 Augusta Ave., lachilaca.com 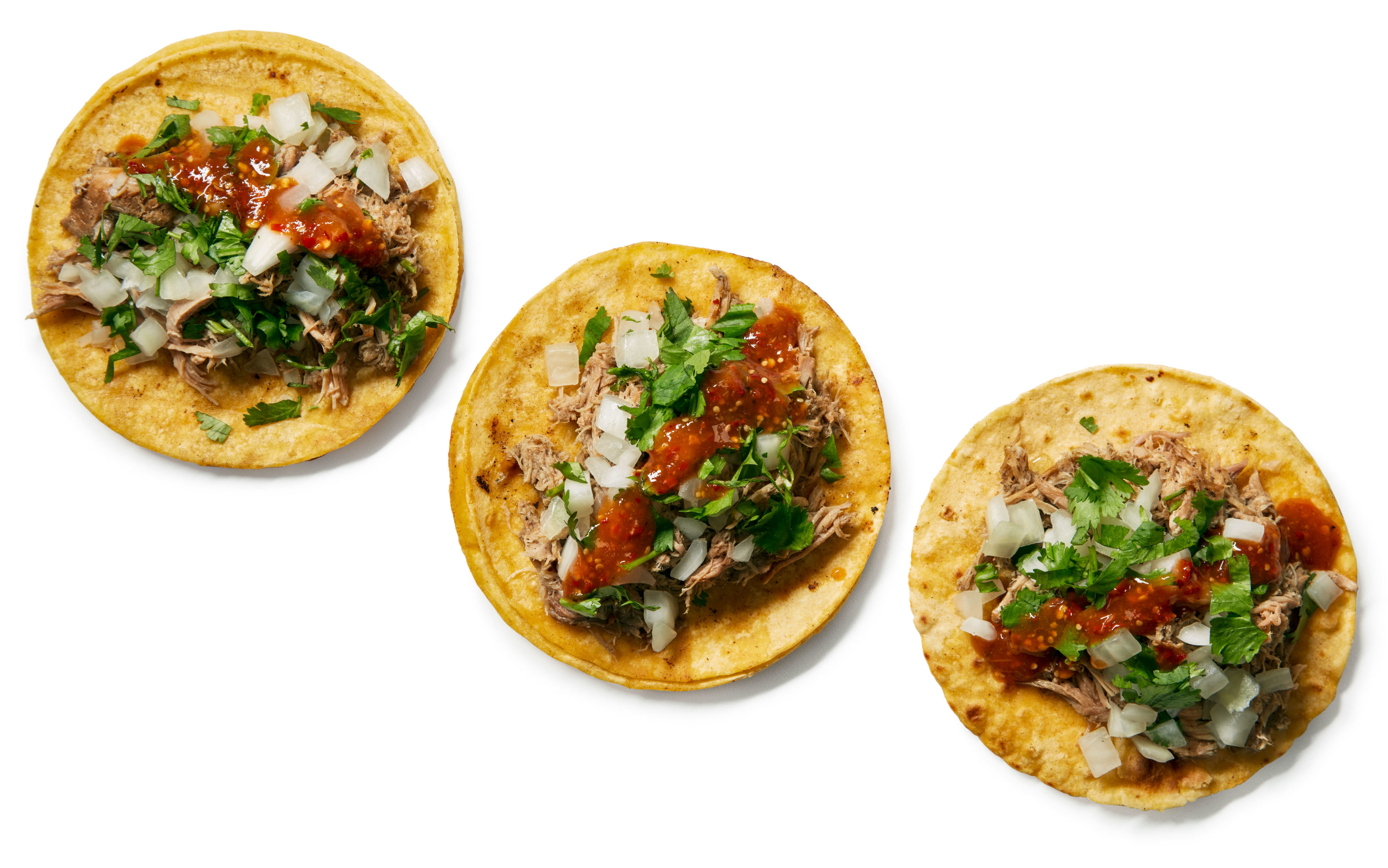 20 This Vic Park and St. Clair mainstay has been a hub for nachos, tacos and towers of beer for more than 20 years. And while the menu contains all the greatest hits in the taco songbook, there’s an entire section dedicated to Baja-style (read: seafood) tacos. The very dependable fish taco here is a strapping hunk of mild basa in a light beer-battered shell, served out of necessity on a double-wide bed of corn tortillas and splashed with a zigzag of chipotle mayo and a sprinkling of tangy pico de gallo. $5.79. 1109 Victoria Park Ave., mexitaco.com 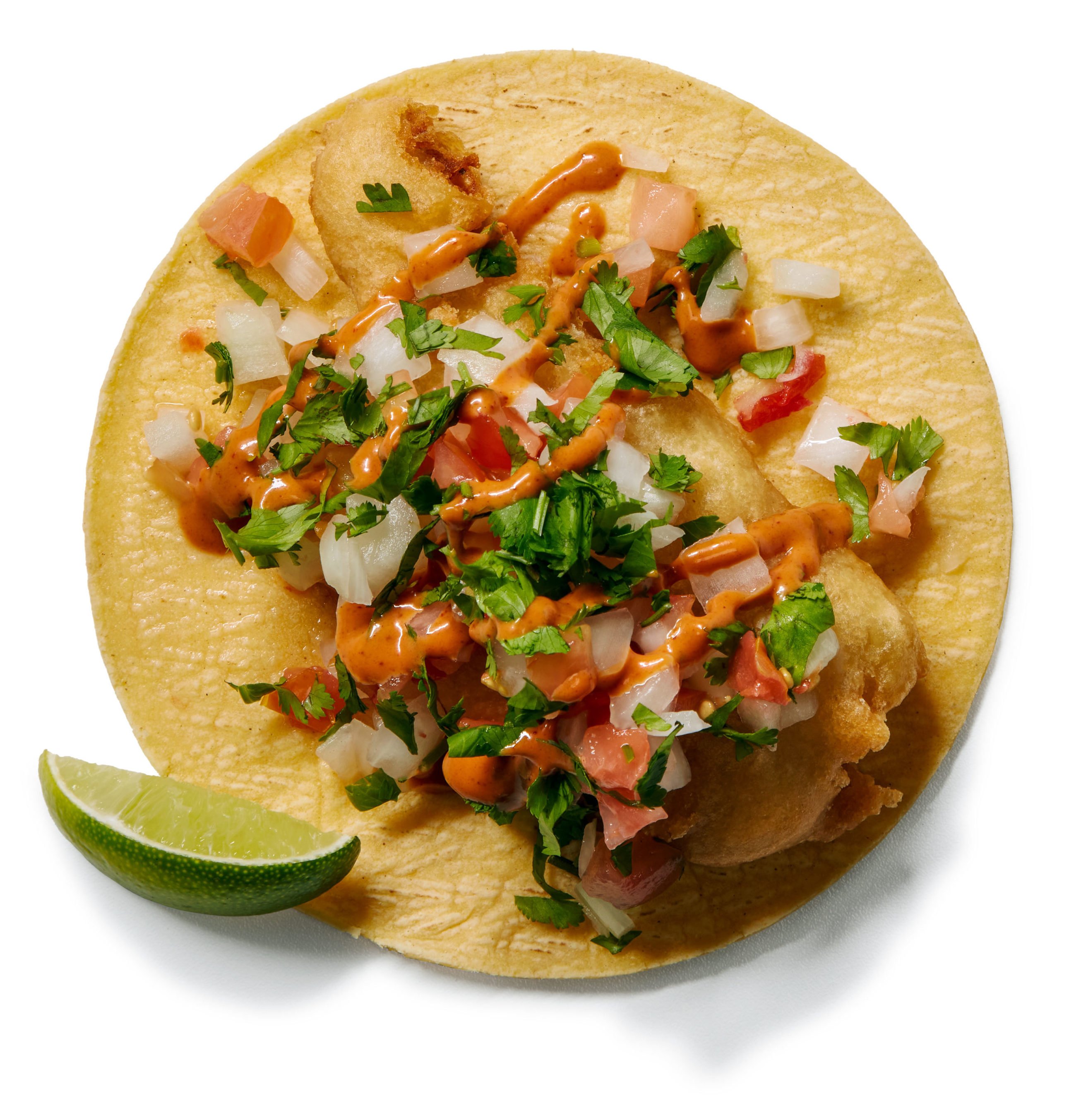