Separated from their favourite baristas during the WFH era, many coffee drinkers took their at-home consumption to new heights—and realized the bog-standard beans they’d been brewing for years were no longer up to the job. Enter some of the best beans from Toronto’s top roasters. Here, our favourite places to scoop up single-origin specimens and balanced blends. 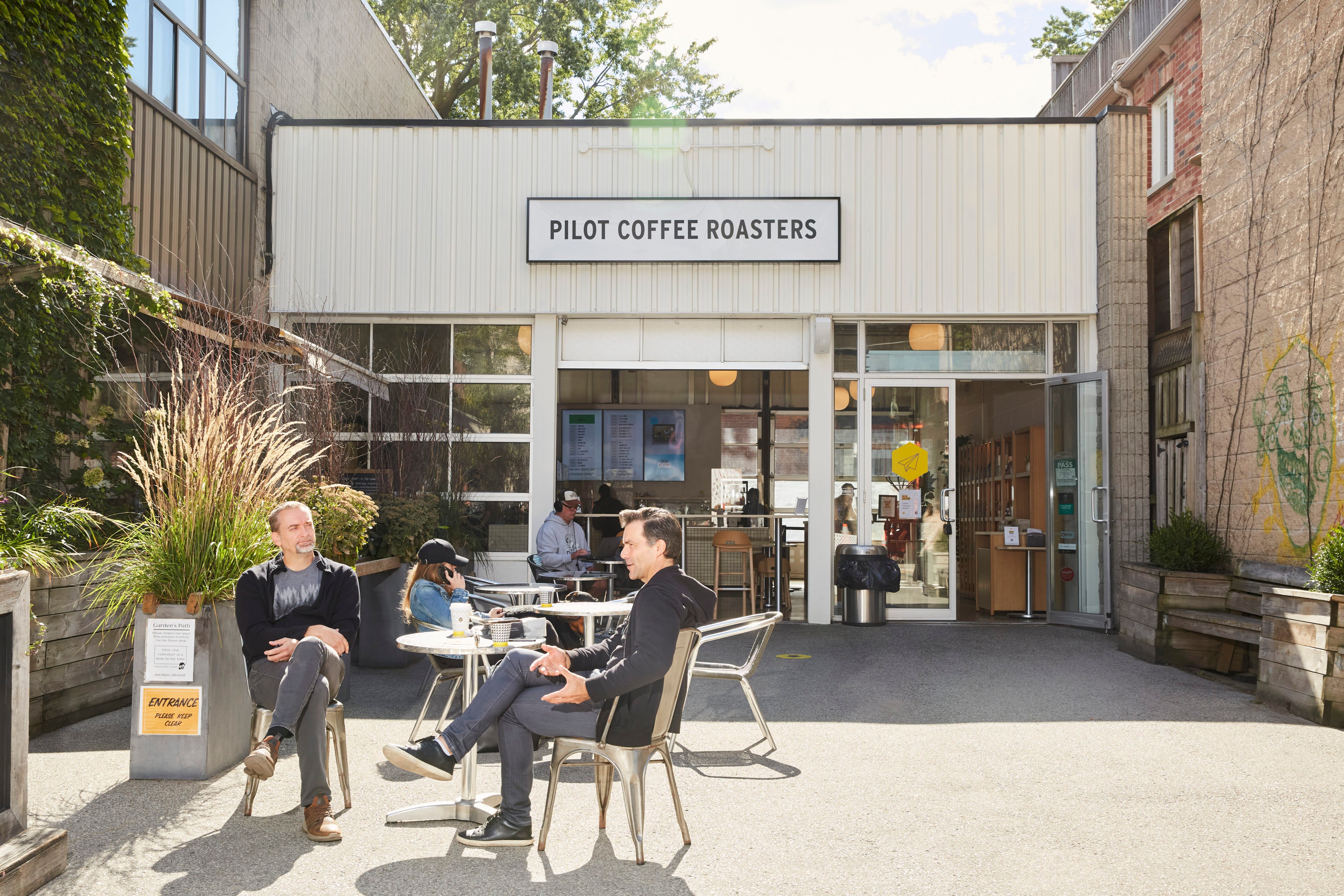 What began life in 2009 as a little Queen East café called Te Aro has morphed into a full-on homegrown success story as Pilot Coffee Roasters. Today, Jessie and Andy Wilkin’s Pilot has its own high-volume east-end roastery and a network of eight beautifully designed locations (two of which are temporarily closed due to Covid) throughout the city. Collectively, they operate as the vanguard of Toronto’s bean-to-cup coffee scene, a remarkably consistent baseline that is a boon to local caffeine heads.

The blends range from classic to adventurous, but the bar always features two options: the Heritage Blend (the brightest light among them) works with virtually every brewing method, from drip to pour-over, and its balanced notes of chocolate, nuts and toffee pair perfectly with milk; the single-origin lineup is refined and aims to bring out the unique terroir of each bean (a recent standout is the Salvadoran La Guachoca, a smooth, caramelly roast with plenty of complexity thanks to the region’s volcanically enriched soil). Meanwhile, Pilot’s fine-filtered, small-batch cold brew—available on tap or in cans—is a triumph of balance, smoothness and subtle sweetness. As a bonus for the snack-minded, Pilot does the vast majority of its baking in house. The sea salt chocolate chip cookie—a beautiful, crackly thing the size of your hand—is second only to the coffee in popularity. 983 Queen St. E., 416-465-2006; 50 Wagstaff Dr., 416-546-4006; 117 Ossington Ave., 416-645-0273; First Canadian Place, 100 King St. W., 416-214-9292; Manulife Centre, 55 Bloor St. W., 416-519-8182; 439 Richmond St. W., 416-393-6000; Union Station, 55 Front St. W., 416-775-3597, pilotcoffeeroasters.com

This two-year-old roastery and café is just new enough to have stayed off the radar. Its top-tier beans, specialty drinks and stunning space easily put it among the city’s best. Standout roasts include the vibrant Gurmah Village from Yemen, with notes of dates, berries and stone fruit, and the Colombian El Paraiso Gold, chock full of fruit and caramel flavours. If ever there were a place to try a drink made with espresso and OJ—a concoction called the Bumble—this would be it. Nibbles come from the likes of Donna’s and Parallel. And yes, the old-school typewriter they have works: type up a letter and they’ll mail it anywhere in the world for $3. 213 Sterling Rd., 416-516-0009, ethicaroasters.com

Sam James Coffee Bar just celebrated 12 years in the city, with four shops, a Junction-area roastery and a dedicated fanbase. The company ethos is to lean toward simplicity and accessibility. This is about good, minimalist coffee you can easily drink multiple cups of. Owner Sam James isn’t into smoky or grassy notes found, respectively, in dark and light roasts; most coffees here are roasted to well-developed (industry jargon for low-moisture, flavour-concentrated) medium. The Butter Knife blend is far and away its most popular. Sweet, chocolatey and with low acidity, it works as well in an espresso as it does in a French press or drip machine, and plays beautifully with milk. (NB: the cafés are best known for their cappuccinos.) The Espresso in Bloom blend is another bestseller—its fruity notes are more like berries than citrus. The Harbord and Ossington locations sell baked goods from Blackbird; at the Parkdale shop, it’s bread and pastries from Robinson Bread, which shares the space. 297 Harbord St., and three other locations, samjamescoffeebar.com

Blink and you’ll miss it: this midtown roastery can easily be overlooked on a bustling stretch of Yonge Street. But inside the narrow industrial-chic space are some of the friendliest baristas in the city (there’s no snobbery here) and an ever-changing lineup of fresh new beans to choose from—all in sleek, cartoon-contemporary packages, which can’t hide the seriousness of De Mello’s endeavours. Single-origin beans from both hemispheres sit alongside signature De Mello blends. It has to be the only roaster in town to feature a coffee with tasting notes of “Twizzler” and “raspberry candy”—that’s the Myanmar-Ethiopia blend called Lollipop, a De Mello summer tradition. 2489 Yonge St., 416-556-5393, hellodemello.com

This specialist in single-origin Ethiopian beans is poised to break into the upper tier of Toronto roasters with its continued expansion into the west end. The new Queen West space whirs to life with the sound of freshly roasted beans being shot through a series of overhead tubes, which cools them as they travel from the roaster into their vats, from where the finished beans are dispensed and ground. It’s state-of-the-art technology, but Mofer is also the place to go for a painstakingly poured steep-and-filter cuppa, which maximizes the signature floral, citrusy characteristics of Ethiopian varietals. For newbies, the Guji is a standout, whether on its own or in a perfectly extracted cortado. 1025 Queen St. W., and three other locations, 416-530-4408, mofercoffee.com

Cafés faced brutally stiff headwinds during the pandemic—especially so for this Bloordale roaster, which uses its large space to host countless events throughout the year. Their coffee business is going gangbusters, though, thanks to signatures like the Ace Espresso, its perennially popular first roast, with nutty floral layers and an ultra-smooth mouthfeel. The single-origin beans are sourced from farmers with whom Propeller has long-established relationships. And the nitrogen-infused cold brew, available canned or on tap, is a big seller any time of year. 50 Wade Ave., 416-479-3771, propellercoffee.com

Reunion has been in the coffee game since 1995—ancient by Toronto standards—first in Mississauga, then at its current facility in Oakville. Its storefront café finally opened in 2015 and quickly became a Roncesvalles favourite. It gave owner Peter Pesce—one of the titans of the Canadian coffee biz—and his son, Adam, a place to showcase one of the city’s deepest lineups of single-origin coffees, like the mainstay Las Hermosas. It’s been on the menu for more than 15 years, and if you like a cup that’s just the right balance of sweet and acidic, it’s a no-doubter. Thanks to an on-site kitchen that’s used by a cool little sandwich joint, Gold Standard, you can pair your top-notch brew with a killer bacon butty, egg-and-cheese English muffin or burger. 385 Roncesvalles Ave., 416-551-3431, reunioncoffeeroasters.com

The thing to get at Hale is the cortado. A sensitive drink with minimal wiggle room when it comes to texture, temperature and ratios, it’s the brand’s cornerstone specialty (they even do latte art with the cortados—no easy feat). The full-bodied Hale Espresso blend is the top seller, sourced from small producers in Ethiopia, Brazil and Guatemala, with whom Hale engages in direct trade. With floral notes from the Ethiopian beans, citrus from the Guatemalans and chocolatey nuttiness from the Brazilians, it’s a remarkably well-balanced blend. If single-origin coffee is your thing, the brand offers a handy variety pack with five picks from across the coffee world—a good way to figure out which region grows your favourite flavour profile. Hale also owns a bakery called Saving Mondays, down the street from their Junction shop, which supplies muffins, lemon olive oil cake, ice cream sandwiches and other goodies. 300 Campbell Ave., unit 103, 647-352-4253, halecoffee.com

The vintage San Franciscan roaster in the front window is a fitting mission statement for owner Susan Bate’s humble Bloor West café. It’s not the splashiest of Toronto’s coffee havens, but it pioneered the city’s coffee culture, roasting beans on site since 1988, when being passionate about coffee was among the most esoteric of pursuits. It’s all about the beans here,
especially the top-selling Millionaire’s Mixture blend, which should be a revelation for dark-roast drinkers who are all too accustomed to drinking scorched beans. These are slowly roasted just shy of their bitter upper limit, producing a highly caramelized and lightly smoky sip that lingers long on the palate. 2412 Bloor St. W., 416-767-1077, coffeetree.ca

Long a supplier to many of Toronto’s cafés and restaurants, Barocco made a breakthrough in 2019 when it opened Barocco x Nino, its first café. The collaboration with North York’s landmark Italian bakery Nino d’Aversa serves pastries, sandwiches and pizza al taglio, but it’s centred around the marble-topped coffee bar, which carries the full line of Barocco beans. Signature blends like Alto—a perfect-anytime medium roast—helped put Barocco on the map, but head roaster Noah Walker’s experimental Bespoke Barocco series are some of the most sought-after beans in the city. One of the latest quick-to-sell-out experiments featured single-origin Indonesian beans aged in bourbon barrels. 974 College St., 416-901-9974, baroccoxnino.com