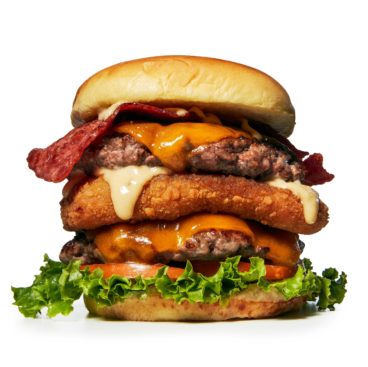 Our artery-busting, deeply researched ranking of the city’s best burgers, from smash patty to veggie

1 Smash burgers are the new normal in this town, and so far there’s none better than this double-stacked sensation. It’s built on dry-aged Cumbrae’s beef patties—a mix of chuck rib-eye and picanha—which add next-level umami and a nutty note that supercharges every bite, along with melted Canadian cheddar and a pickle-packed burger sauce on a Terroni bun. $13. 2388 Yonge St., stocktc.com 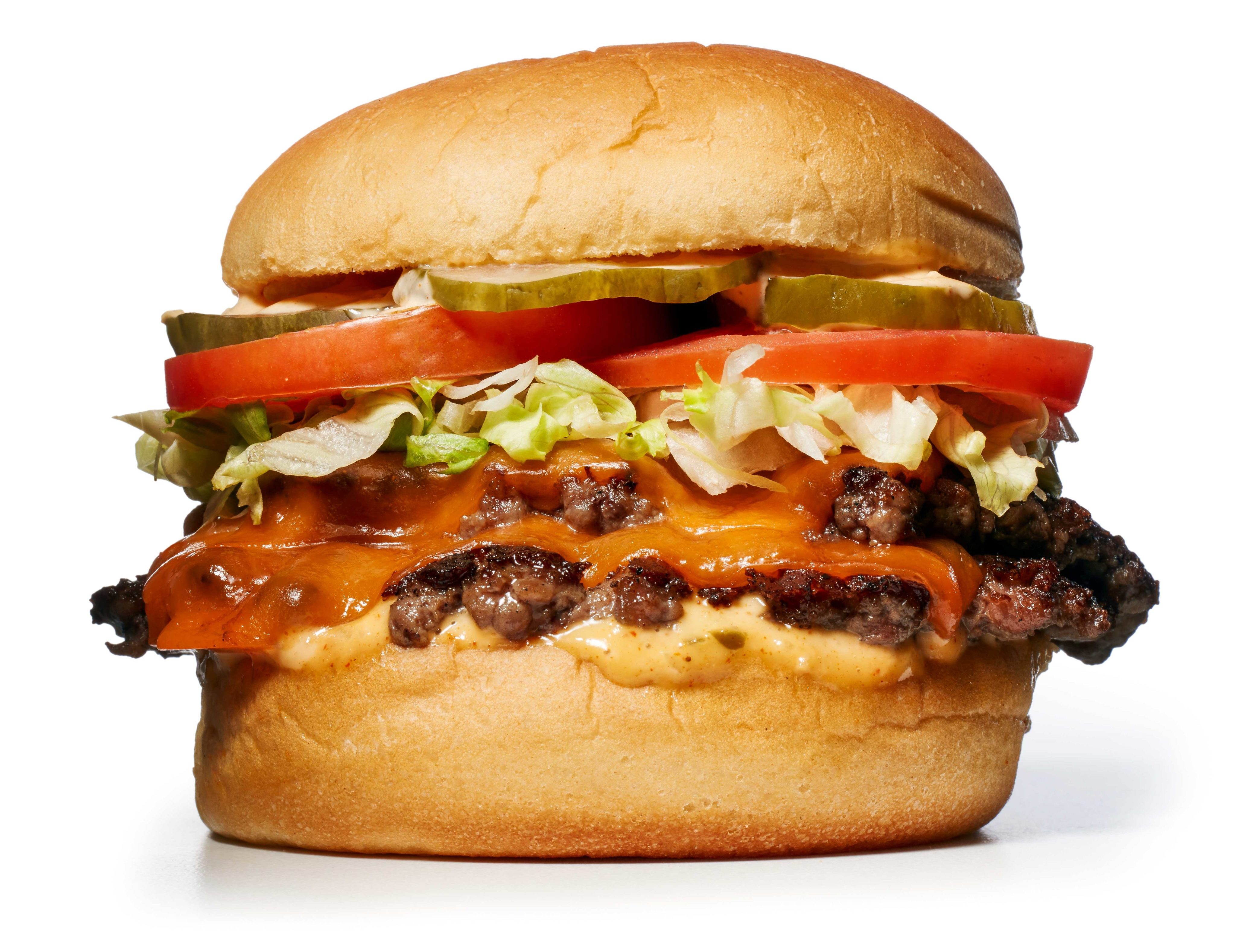 2 Chef Patrick Kriss’s signature burger features
a chuck-brisket patty stuffed into a house-made potato roll and topped with a thick slice of buttery Beaufort cheese grilled until it glows golden-brown, thin slices of pickled Vidalia onion, cheddar cheese aïoli and shredded lettuce so crunchy it could trigger an ASMR. It’s so popular that they just opened a burger-driven Liberty Village takeout joint, too. $24. 163 Spadina Ave., aloetterestaurant.com 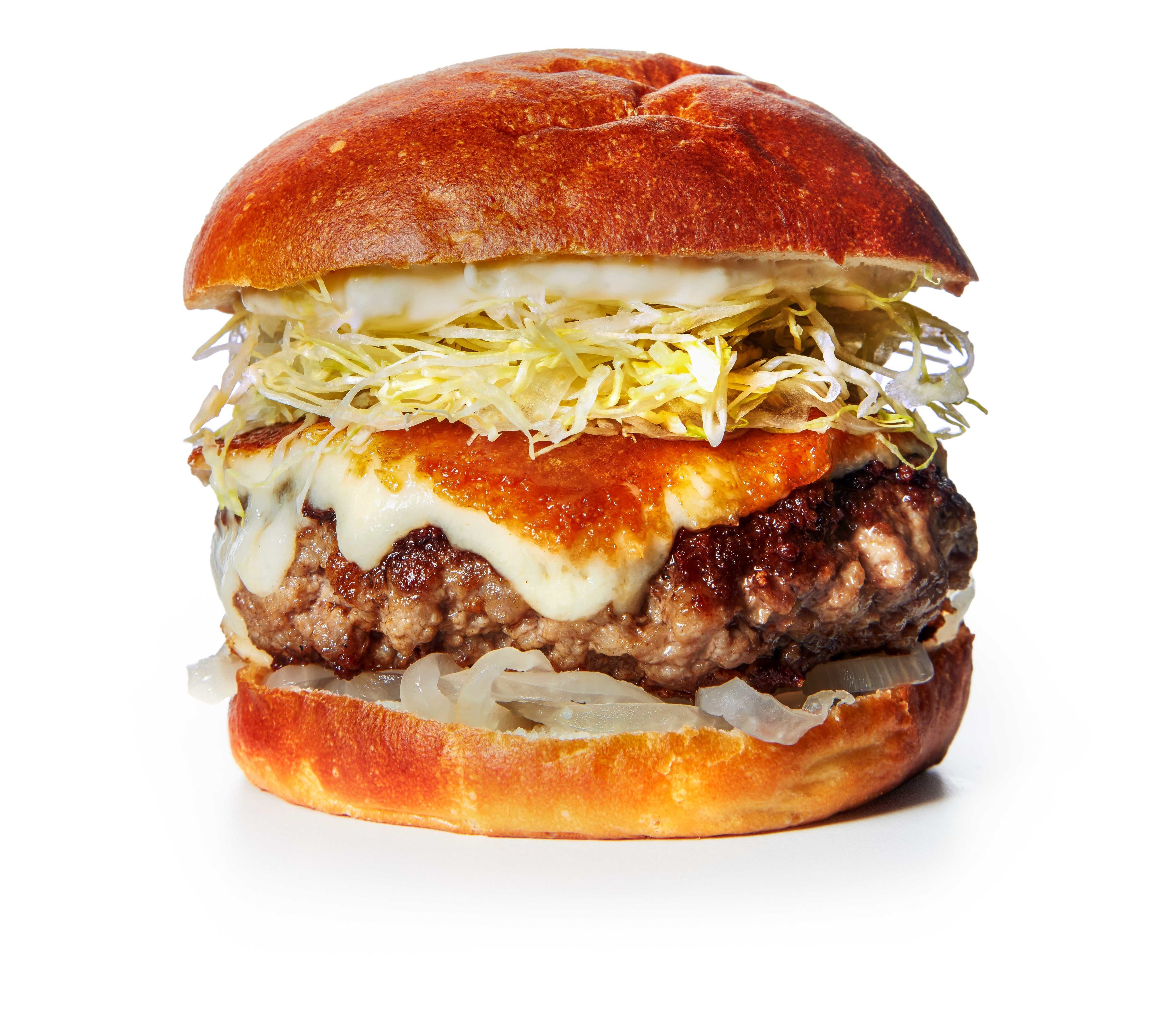 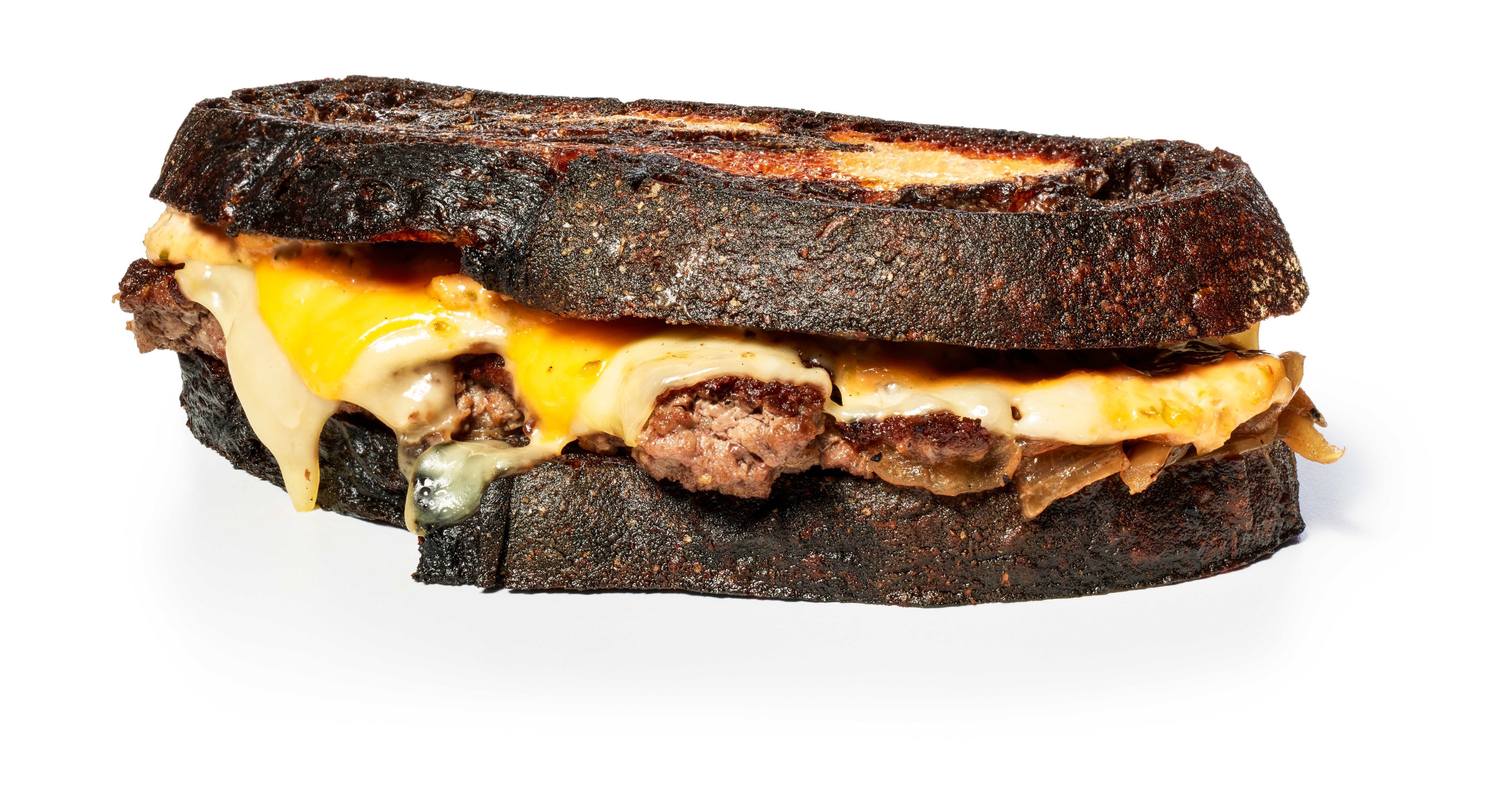 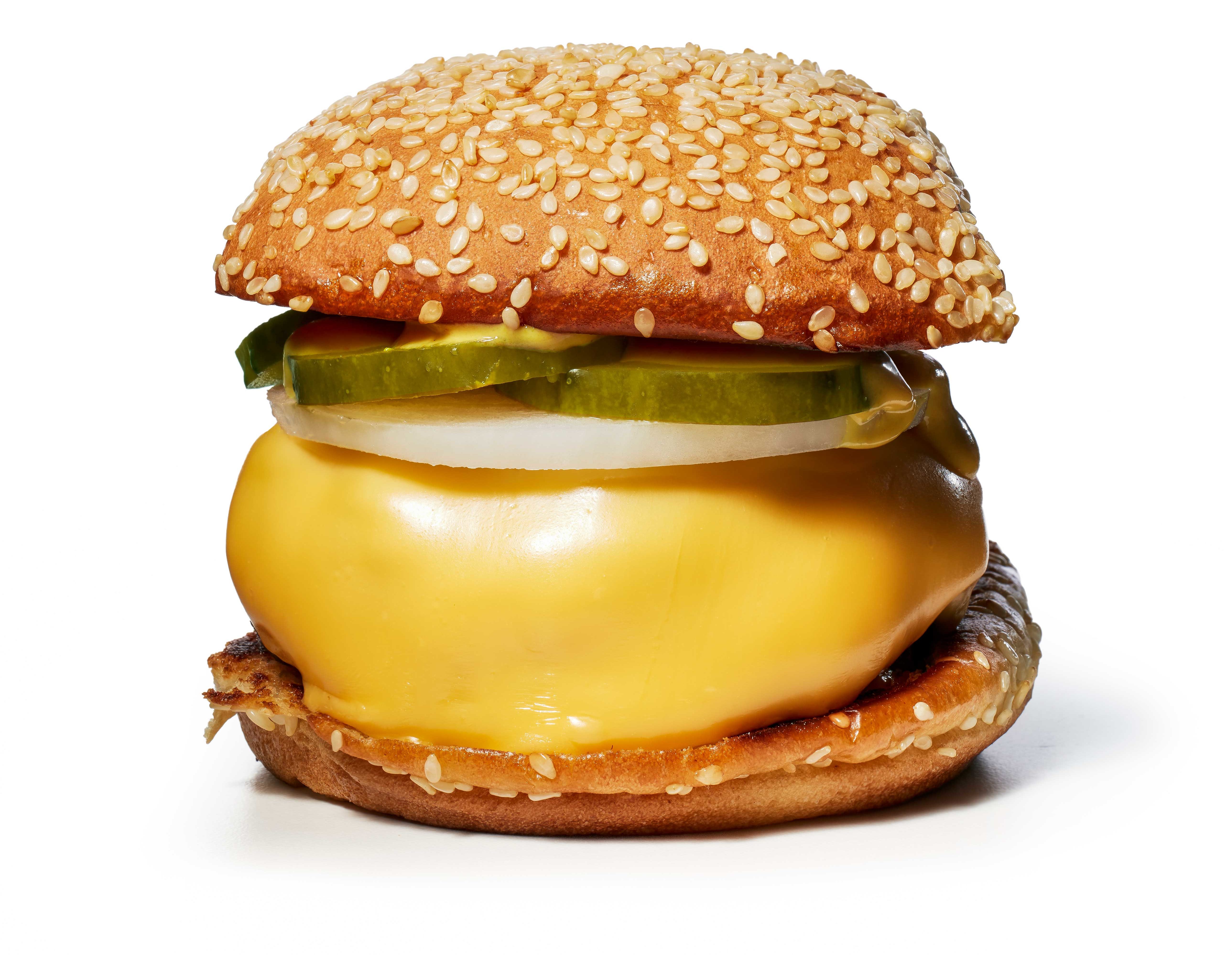 5 Grilled in mustard with onions, topped with pickles and American cheese, wedged into a Martin’s potato roll and wrapped in shiny gold foil, these four-bite burgers aren’t going to win any beauty awards, but it’s what’s inside that counts. Buy one for a snack, two for a meal that might require a little nap afterwards. $7. 385 Roncesvalles Ave., 1574 Queen St. W., breakfastsandwich.ca 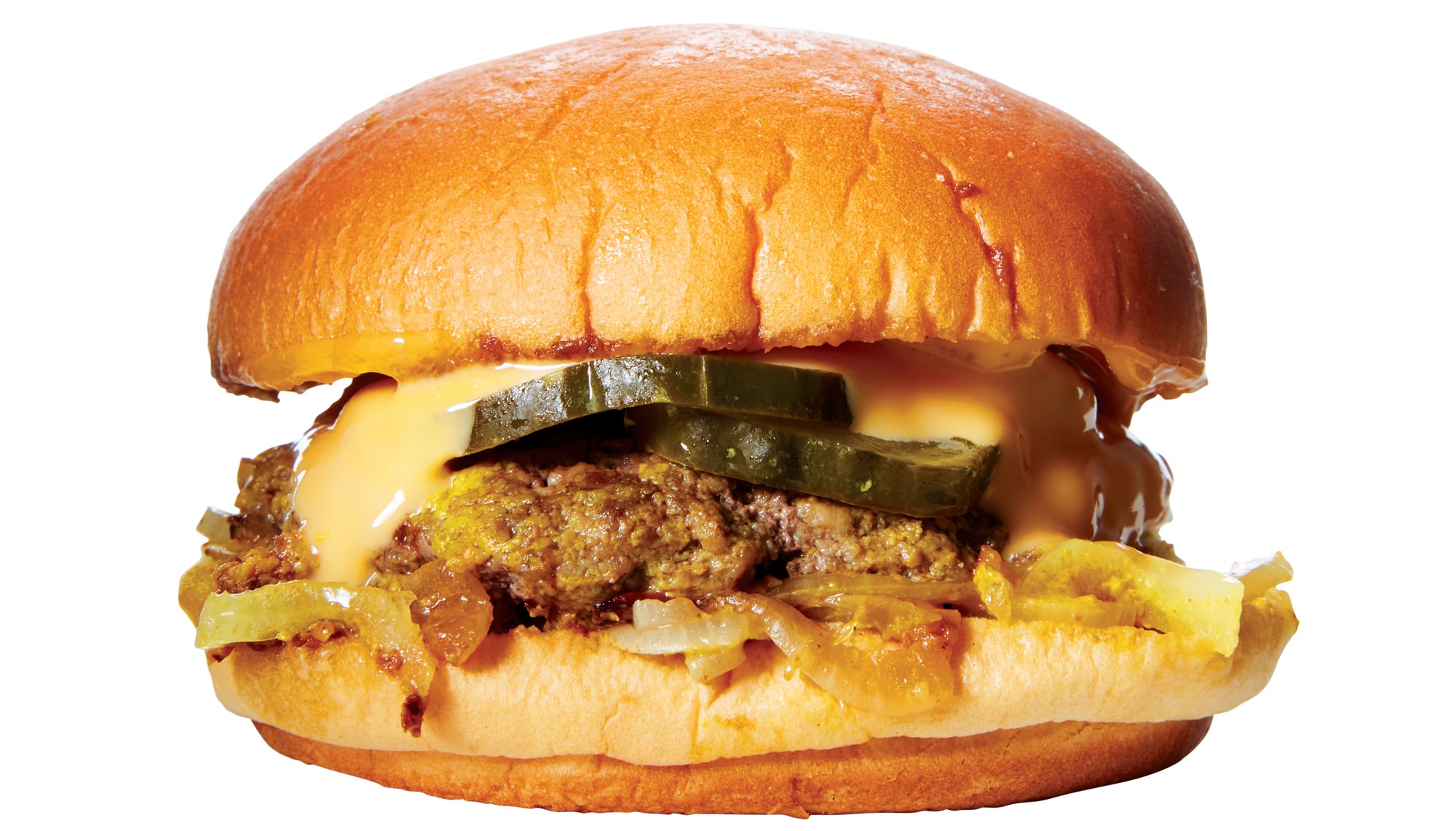 6 Jesse Vallins recently took over the kitchen of this iconic steakhouse, adding a few new items to the menu of already great hits. One of them is this beast of a burger meant to go with a glass (or bottle) of red from the restaurant’s cellar. The luxe patty—a blend of house-butchered and dry-aged rib-eye and short loin patty—is topped with a red-wine onion relish, black truffle mustard and raclette, on a potato milk bun. $38. 7 Elm St., barberians.com 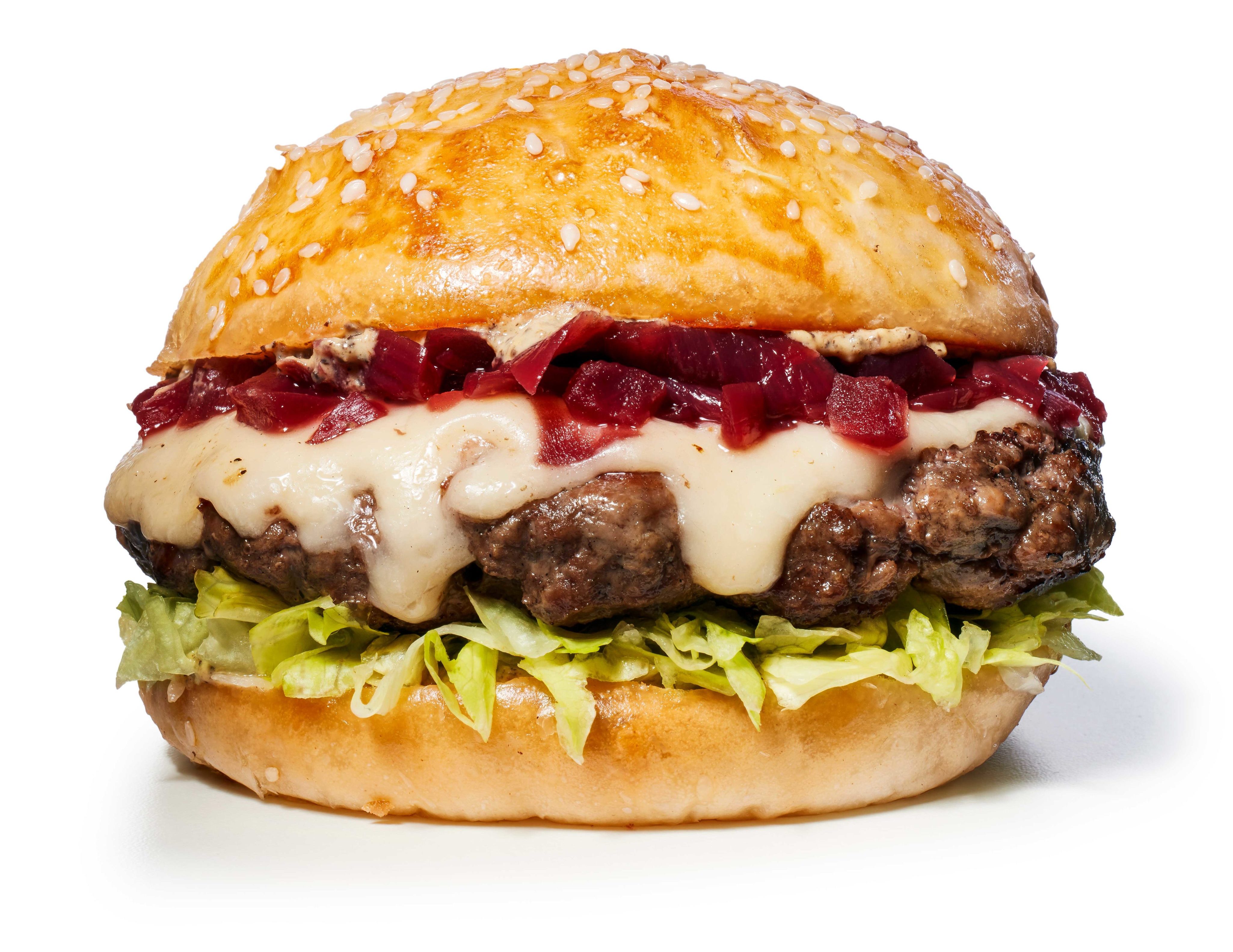 7 Ossington’s new darling wears a lot of hats: it’s a café, a wine bar, a one-stop artisanal grocery shop. The food can be fancy—asparagus with preserved lemon, black bass crudo—but then there is the burger: decidedly unfancy but with a lot of hidden frills. It comes on a sesame seed Blackbird bun so pillowy it deflates on contact, with American cheese, white onion, bread-and-butter pickles (you had a good run, dill) and house remoulade. $21. 210 Ossington Ave., manita.ca 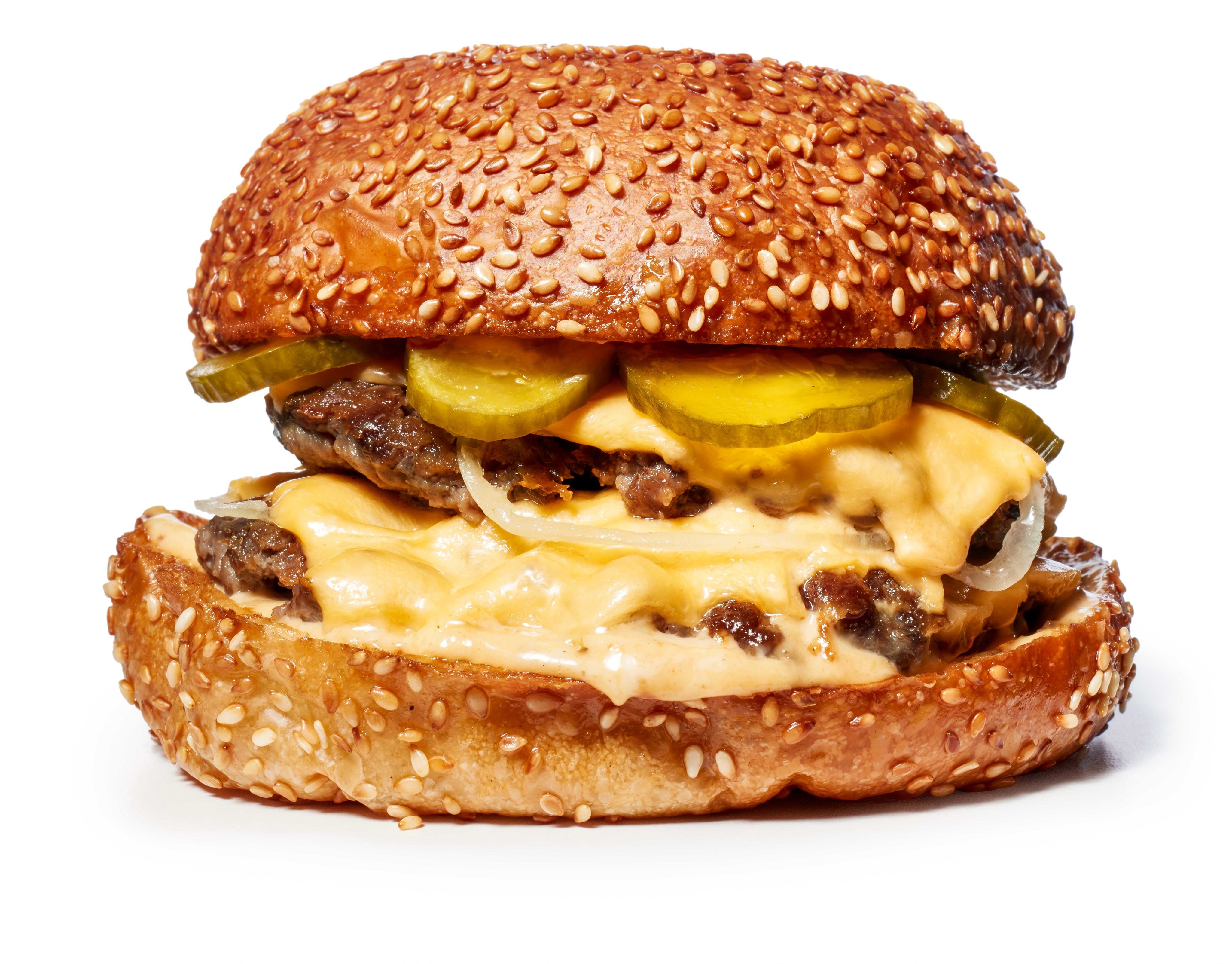 8 Harry’s may have lost its original diner digs, but the Red Burger is still a classic. A red chorizo patty comes topped with pickled jalapeño mayo, havarti and a ring of juicy charred pineapple on (you guessed it) a Martin’s potato roll. $10.79. 293 Palmerston Ave., harryscharbroiled.com 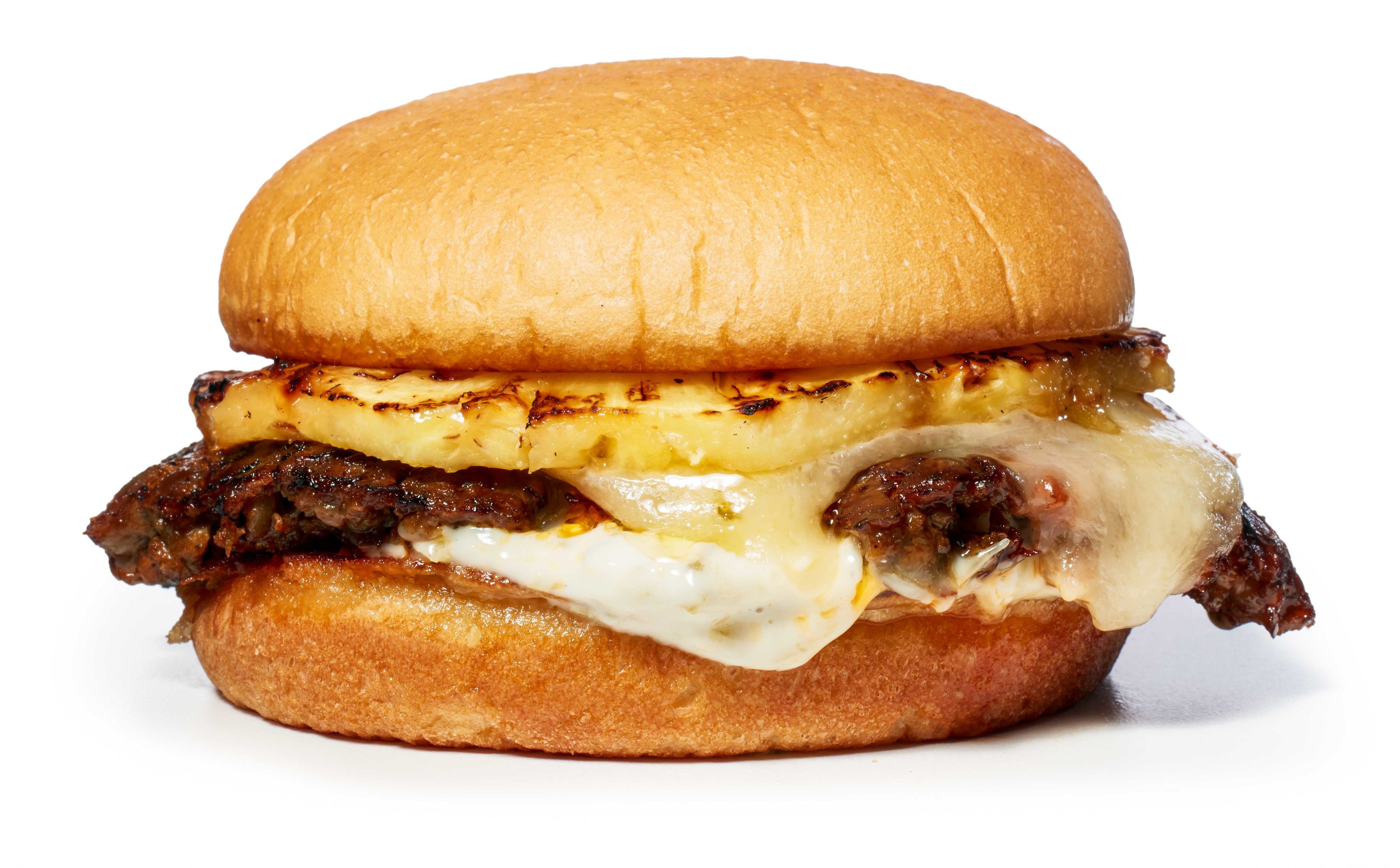 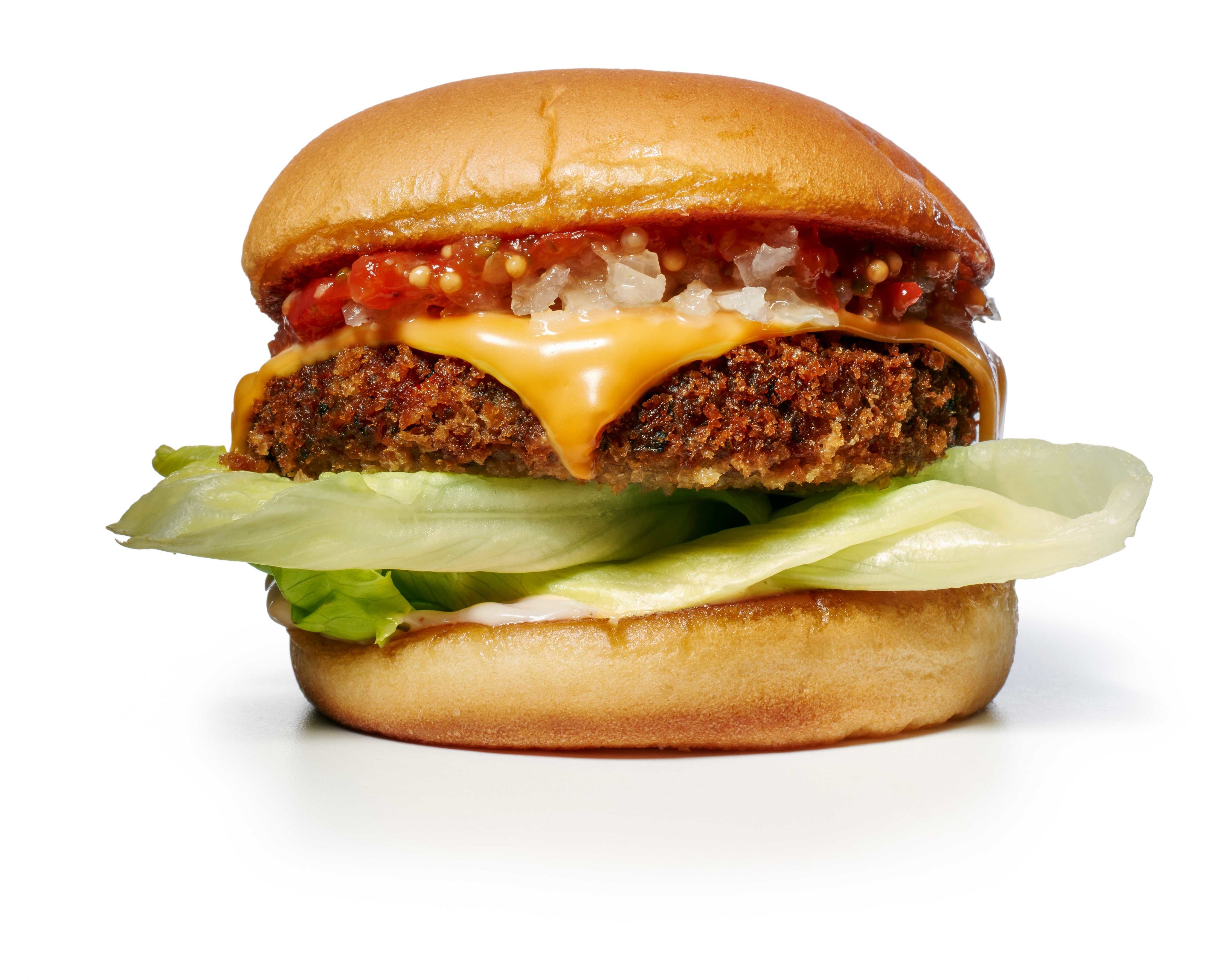 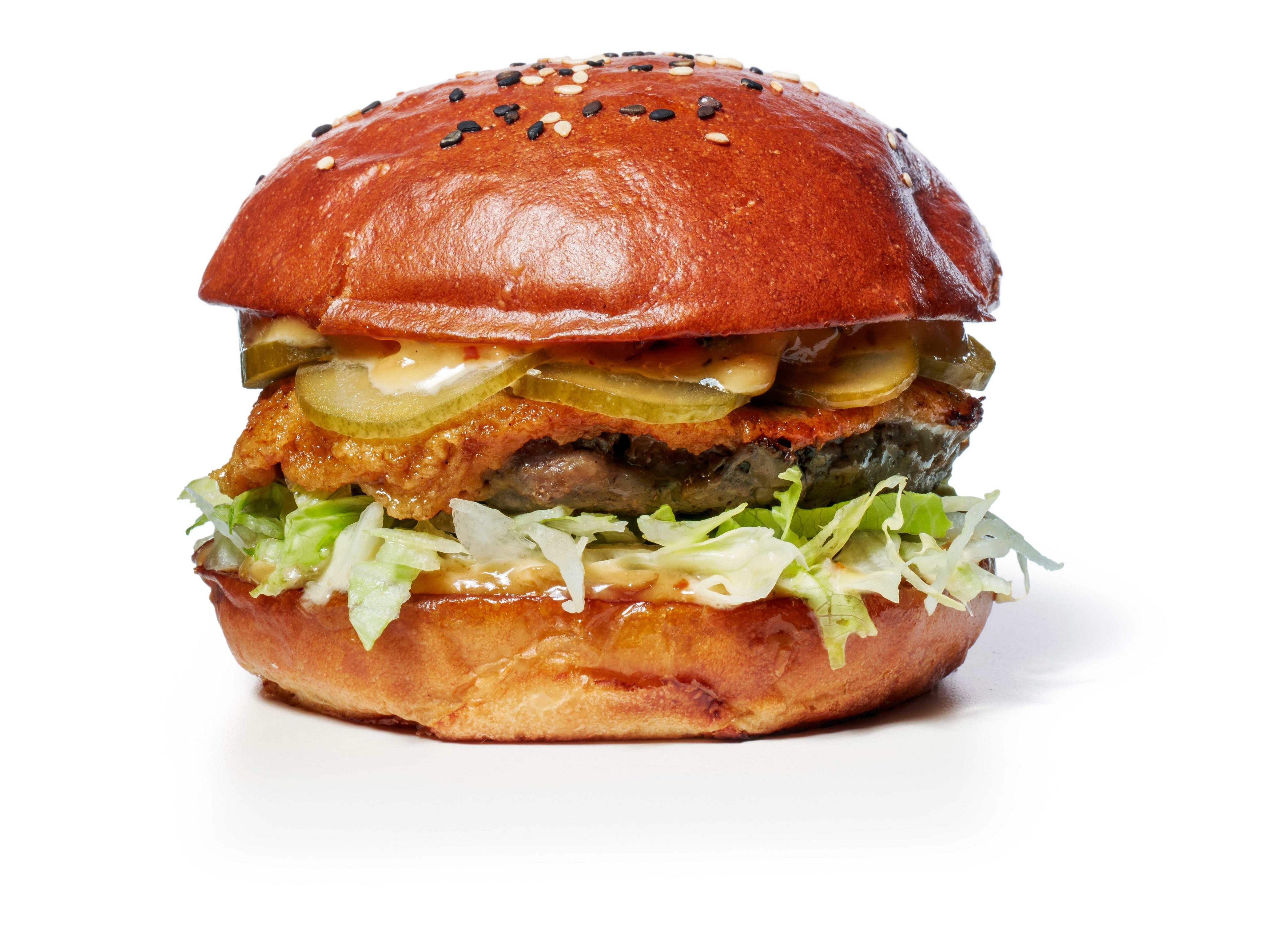 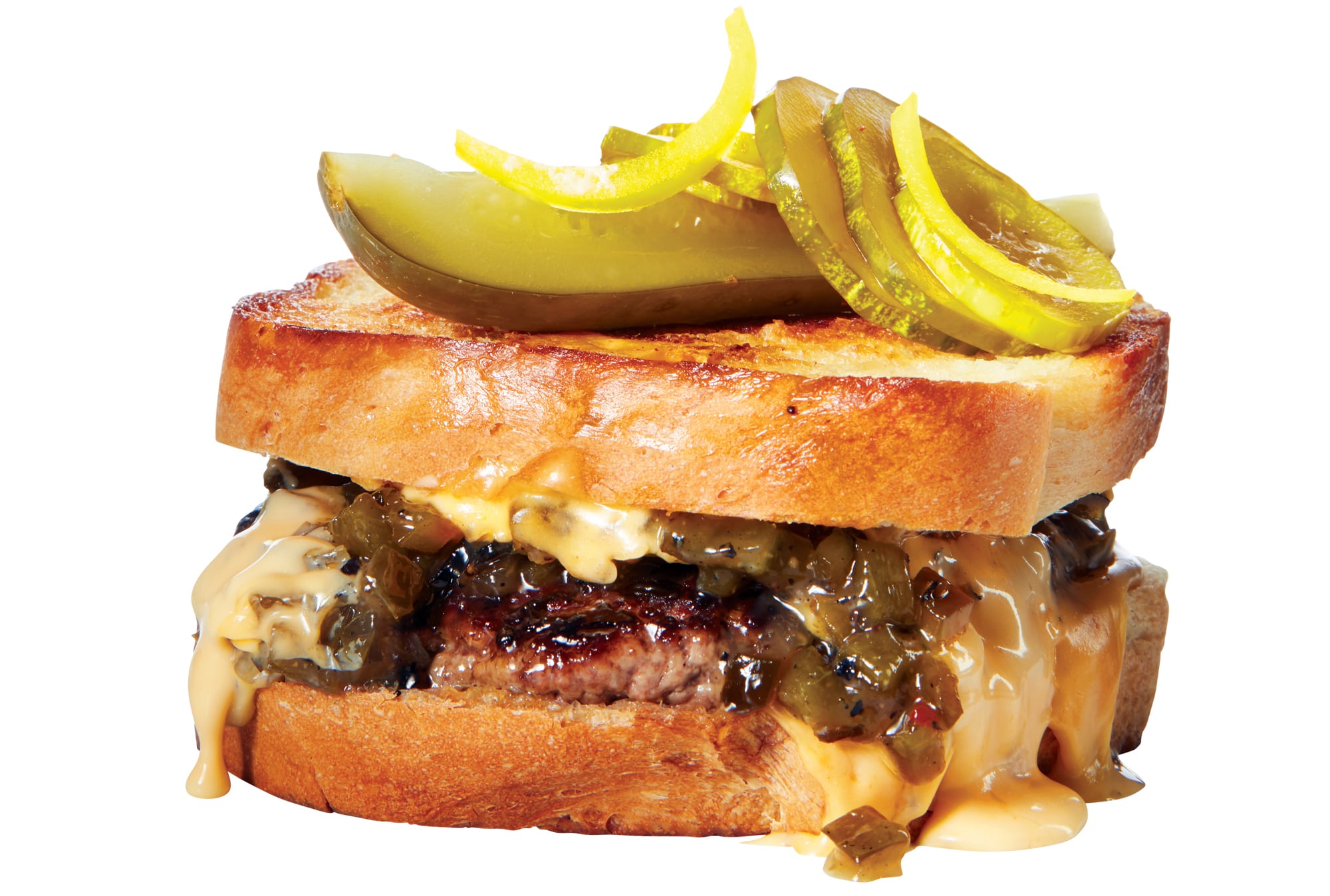 12 Carl Heinrich’s signature burger has been
a mainstay of the menu since day one. It’s made from organic, grass-fed beef (Heinrich is a stickler for sourcing locally and ethically) and topped with a beet chutney that introduces a pop of colour and earthy sweetness to the mix, along with aged cheddar, pickled onions and a creamy garlic aïoli. $27. 1 Richmond St. W., richmondstation.ca 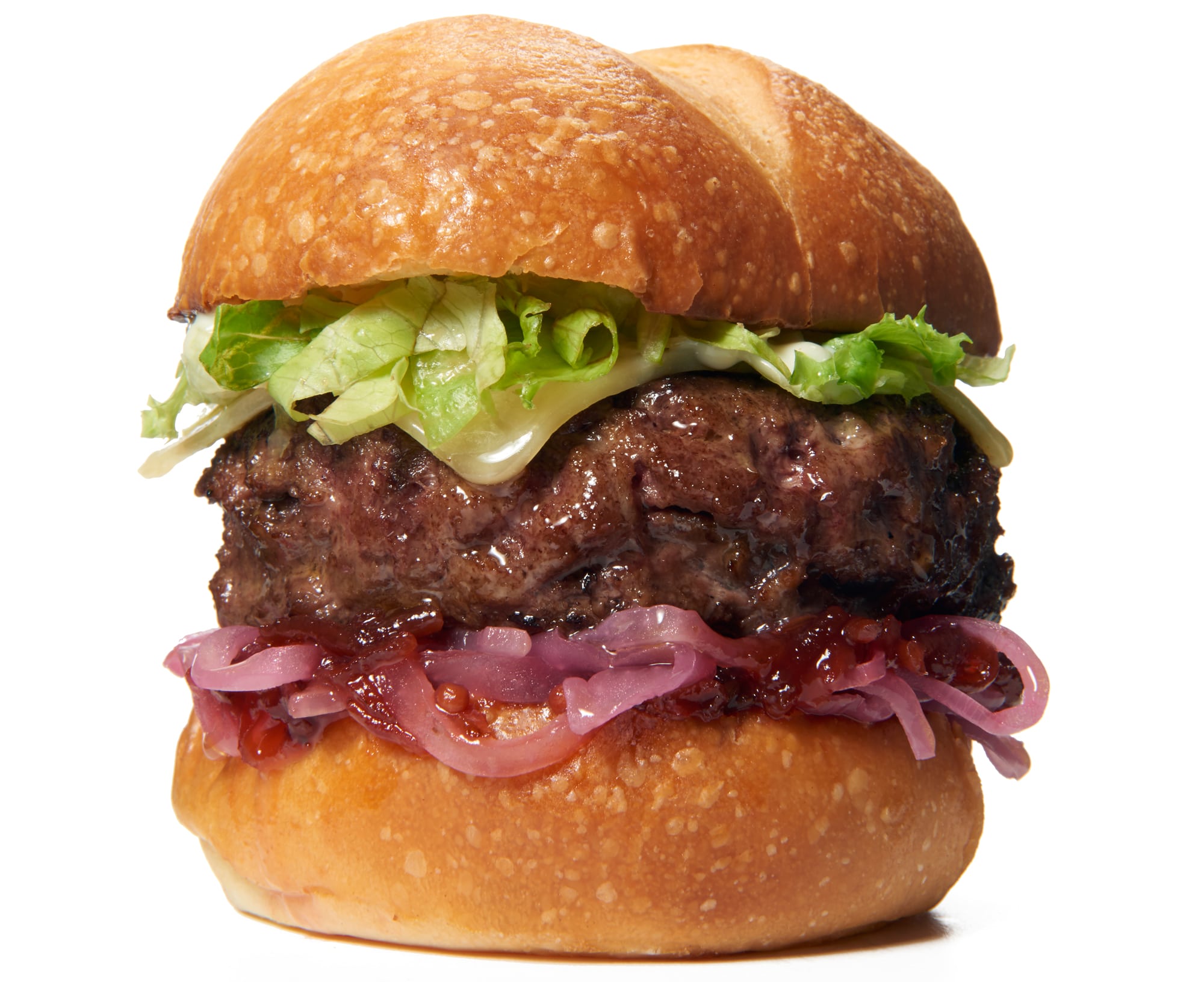 13 Almost 20 years in and Mark McEwan’s burger—a favourite of Financial District power-lunchers—still means business, even though it’s come down in size. The six-ounce patty on a bed of greens is topped with brie de Meaux, grilled porcinis and truffles two ways (shaved, aïoli), making it an umami bomb worthy of its price tag. $33. 66 Wellington St. W., mcewangroup.ca/bymark 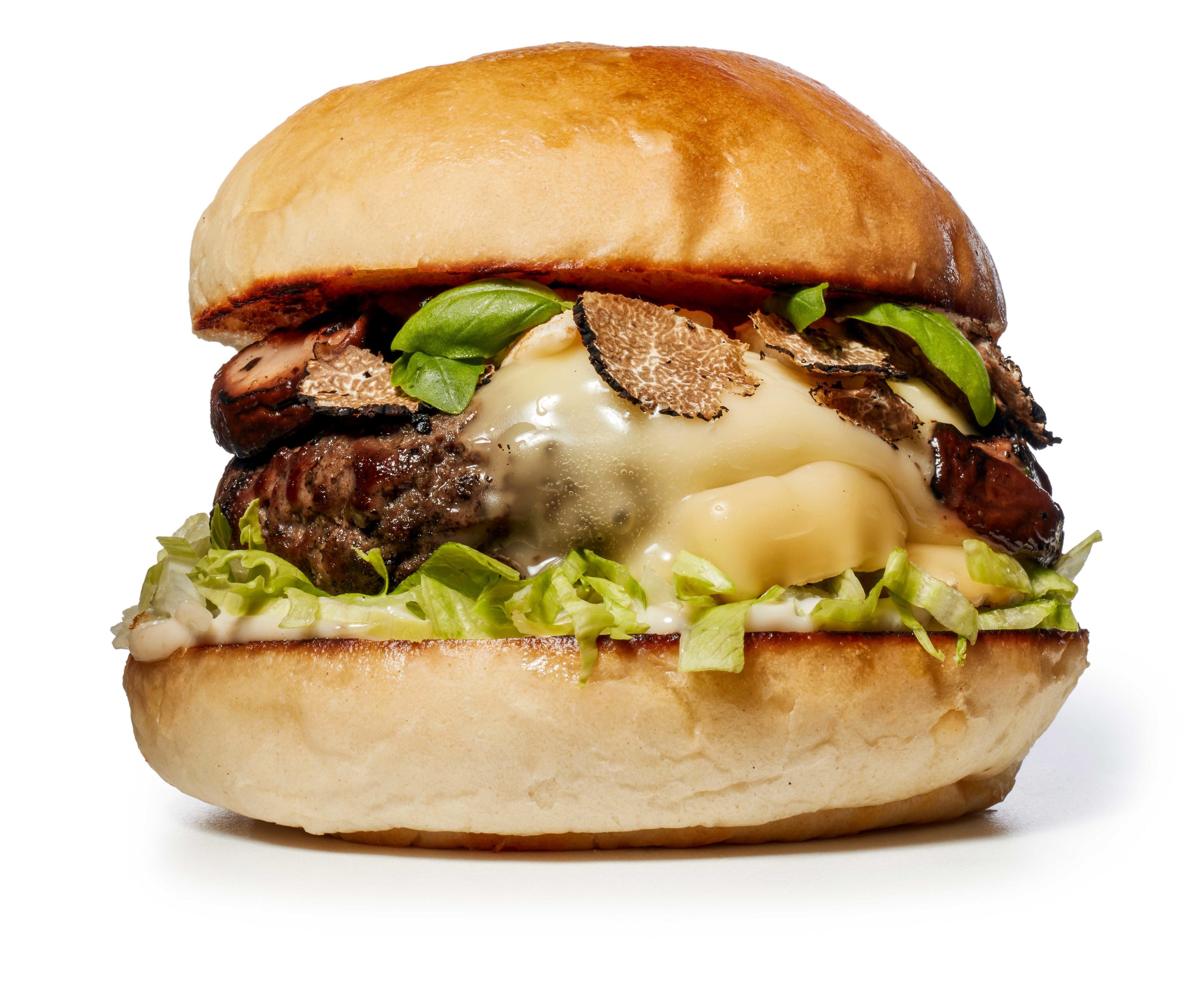 14 The food cart selling one of the city’s best steak sandwiches now offers a mean burger. Fadi Zreik cooks halal beef sous-vide before grilling it for seriously juicy patties charred in all the right places, then tops them with American cheese, baby greens, tomato, caramelized onions and house mayo on a sesame seed bun. $8 (single) or $12 (double). 505 University Ave., @nobsofficial 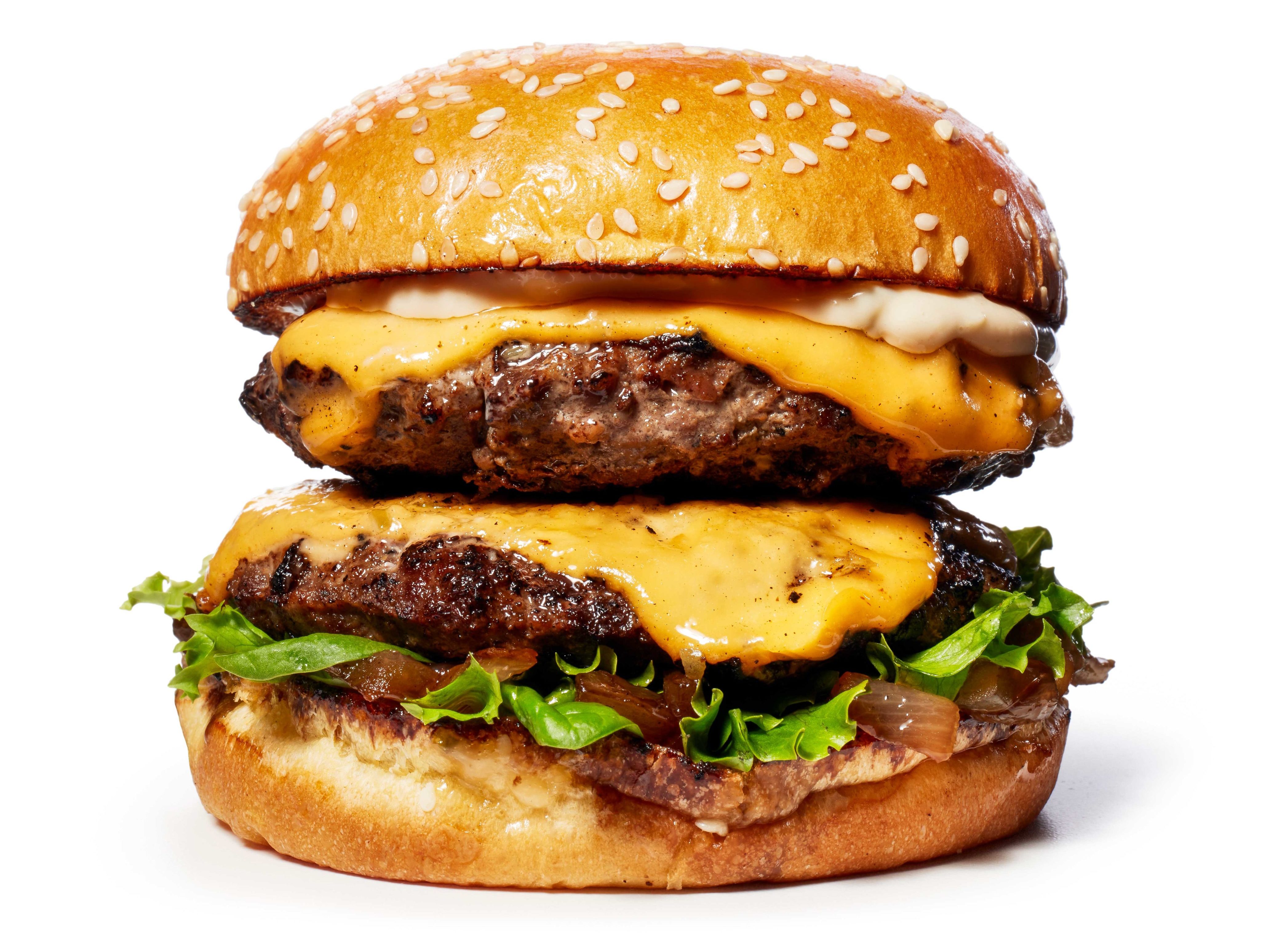 15 The burgers at this Annex joint wear their Ghanaian influences proudly, none more than this burger, named for the most popular beach in Accra. A Beyond Meat patty is topped with jalapeño havarti cheese, caramelized onions, secret sauce and, yes, those are fried plantain wedges peeking out from the potato bun. $13. 296 Brunswick Ave., auntylucysburgers.com 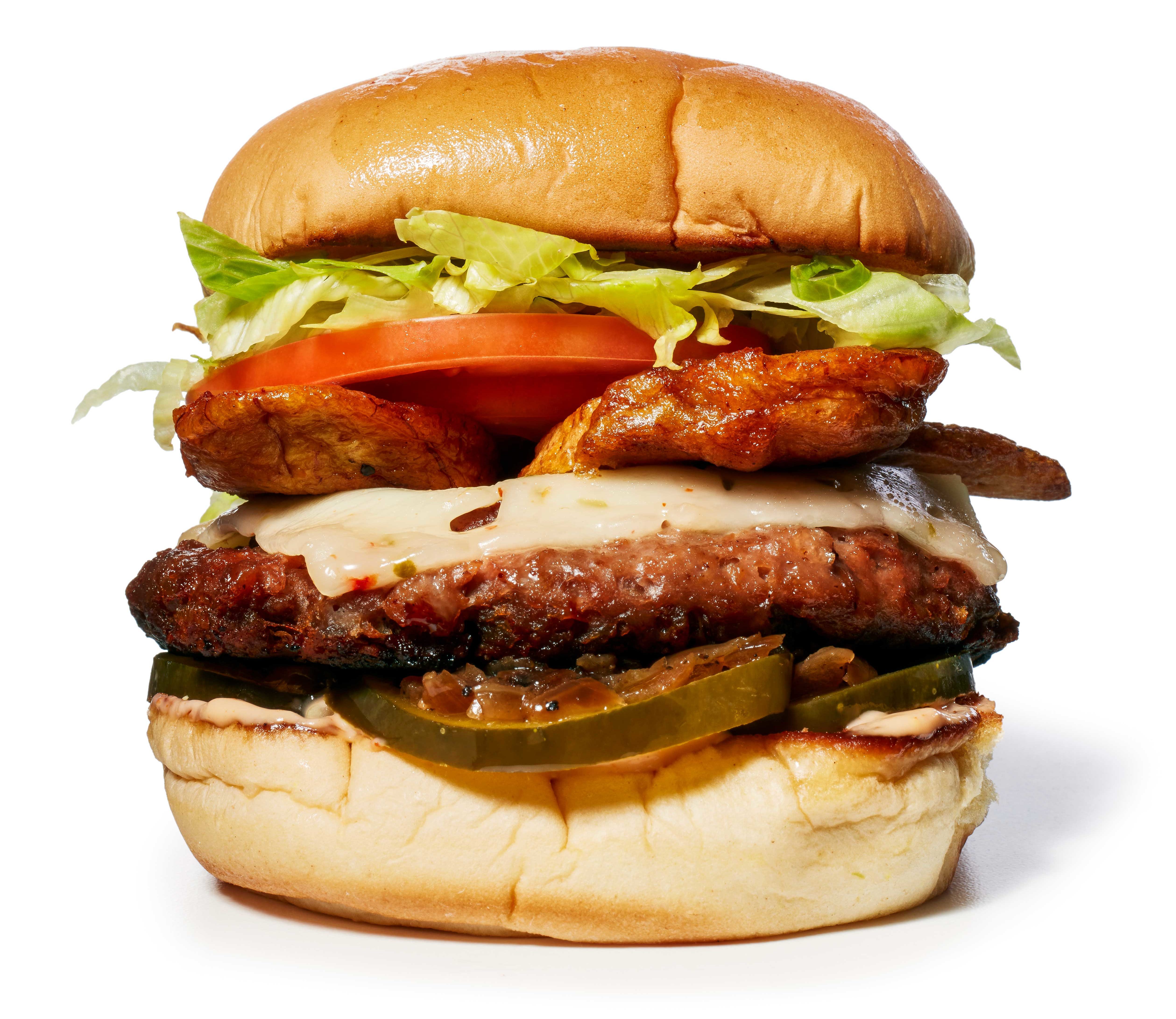 16 The burger that made the smash patty a household name in Toronto is the Rude Dude from this growing local chain. The formula hasn’t changed: patties smashed so flat that they’re basically just crispy bits held together by melted American cheese, beneath sliced tomato, a leaf of lettuce and a schmear of tangy sauce. $10.49. Various locations, rudyresto.com 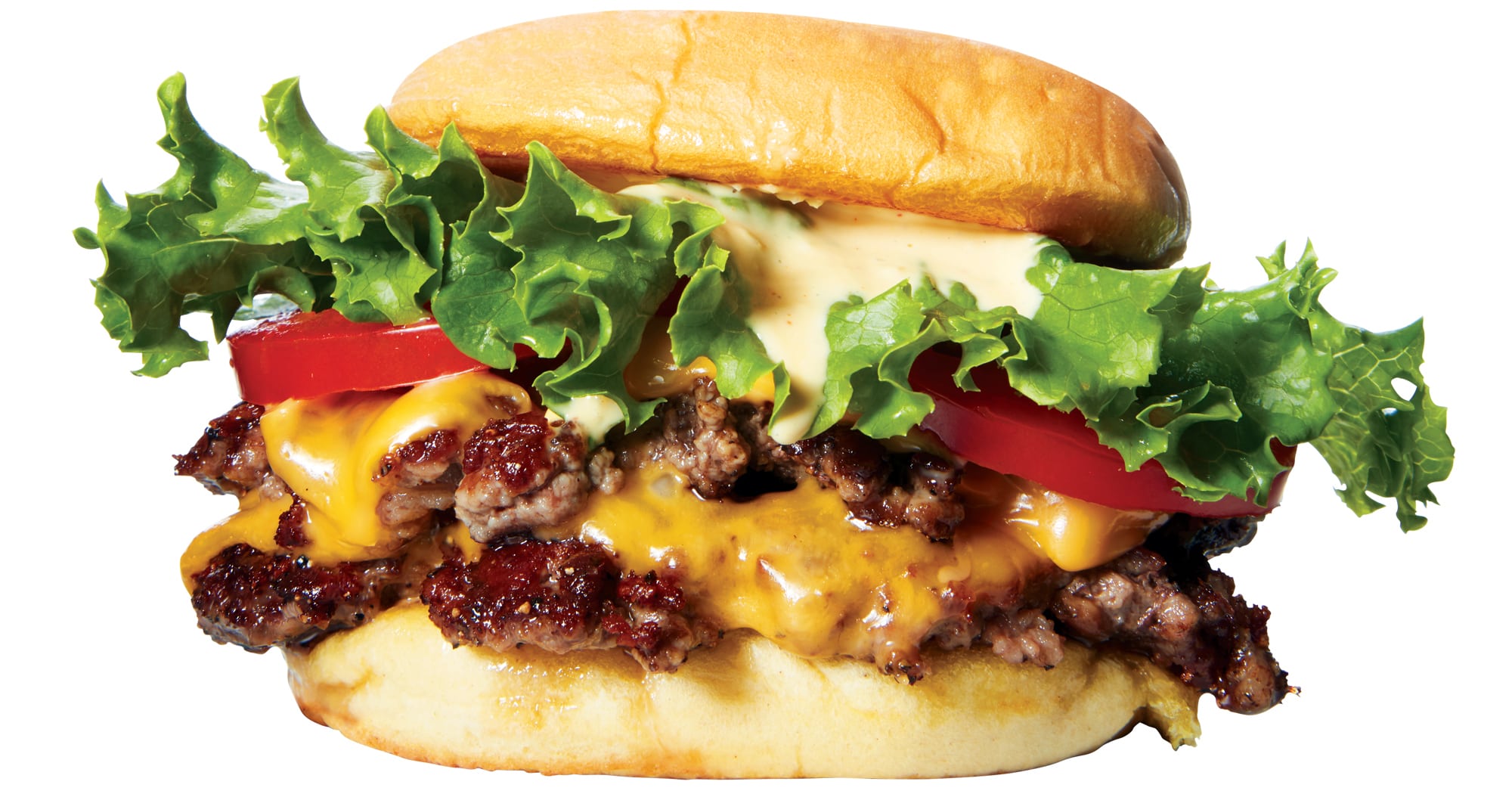 17 When he’s not busy with butchery, Matthew Kumprey builds a damn fine bacon cheeseburger. The coarse-ground chuck-sirloin patties are the star. But the crunch of the smoked bacon, the snap of the pickles and the iceberg, and the tang of the house secret sauce add up to something special. $12. 2055 Yonge St., thebutchersson.ca 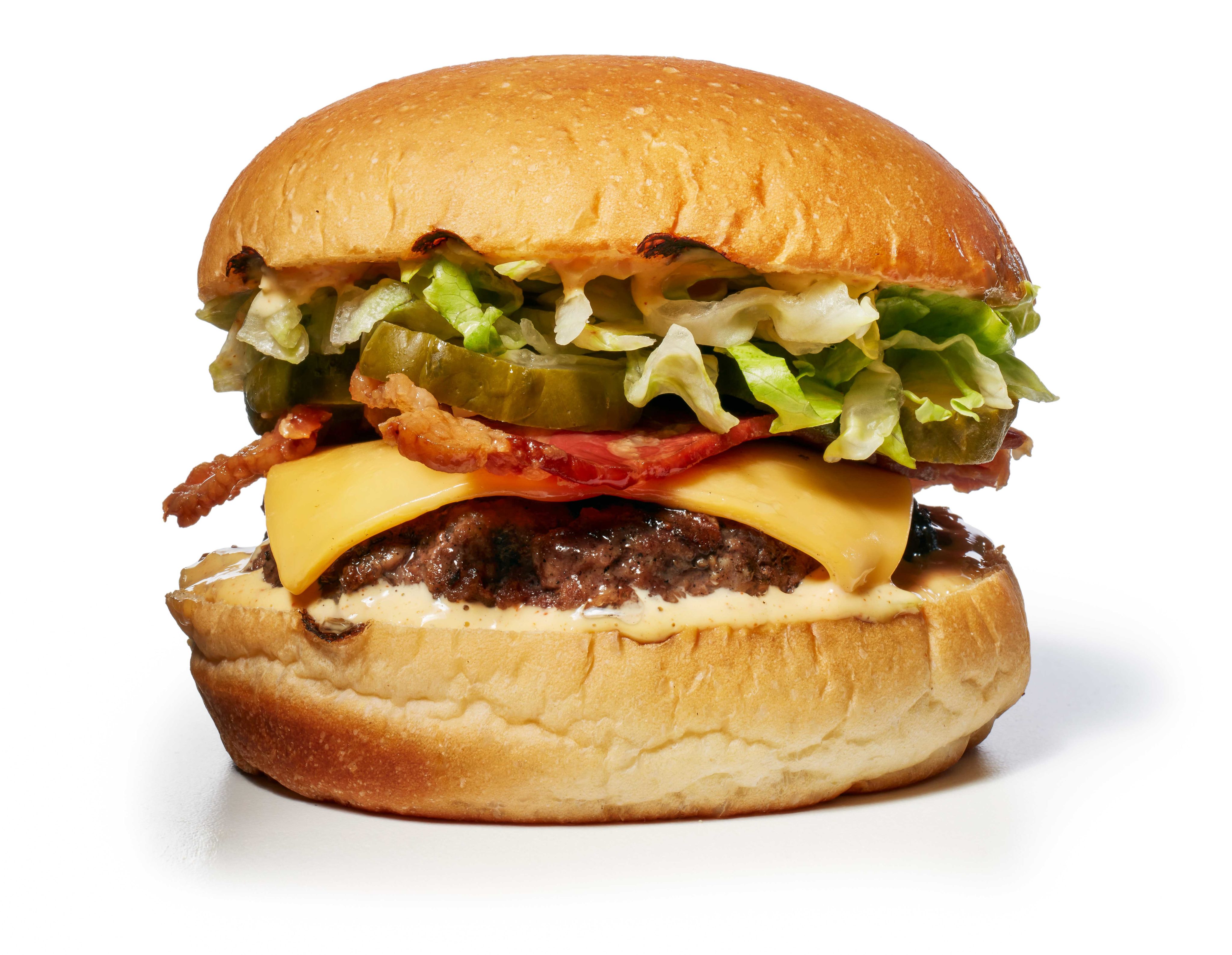 18 The namesake burger at the Food Dudes’ OG restaurant has never changed because when something ain’t broke, you don’t fix it. A prime beef patty is sandwiched between toppings that include provolone, pickles, gochujang mayo and house kimchi, on a black-sesame brioche bun. It’s spicy, it’s tangy, it’s funky and it’s one of our all-time faves. $21. 196 Robert St., rasabar.ca 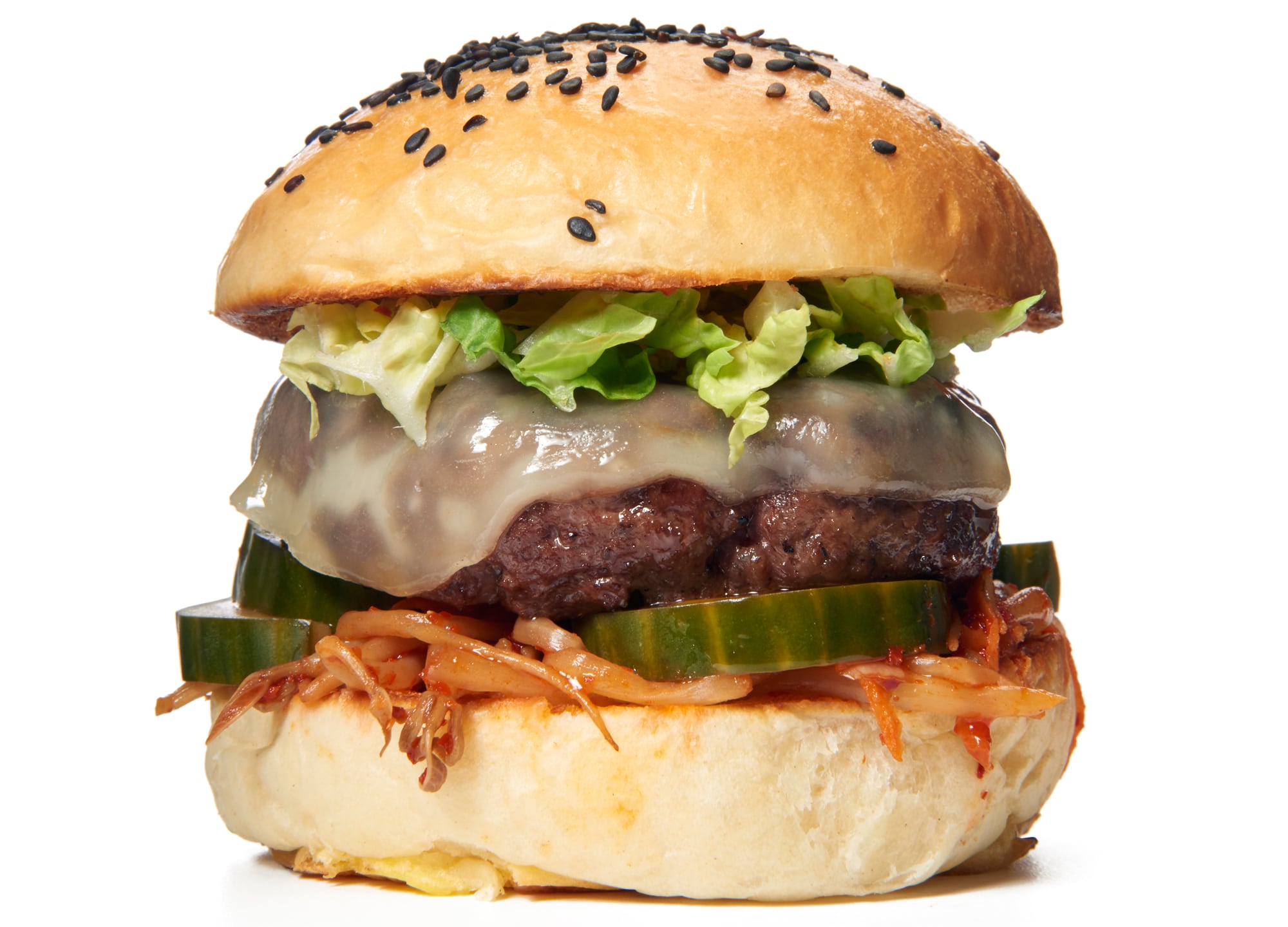 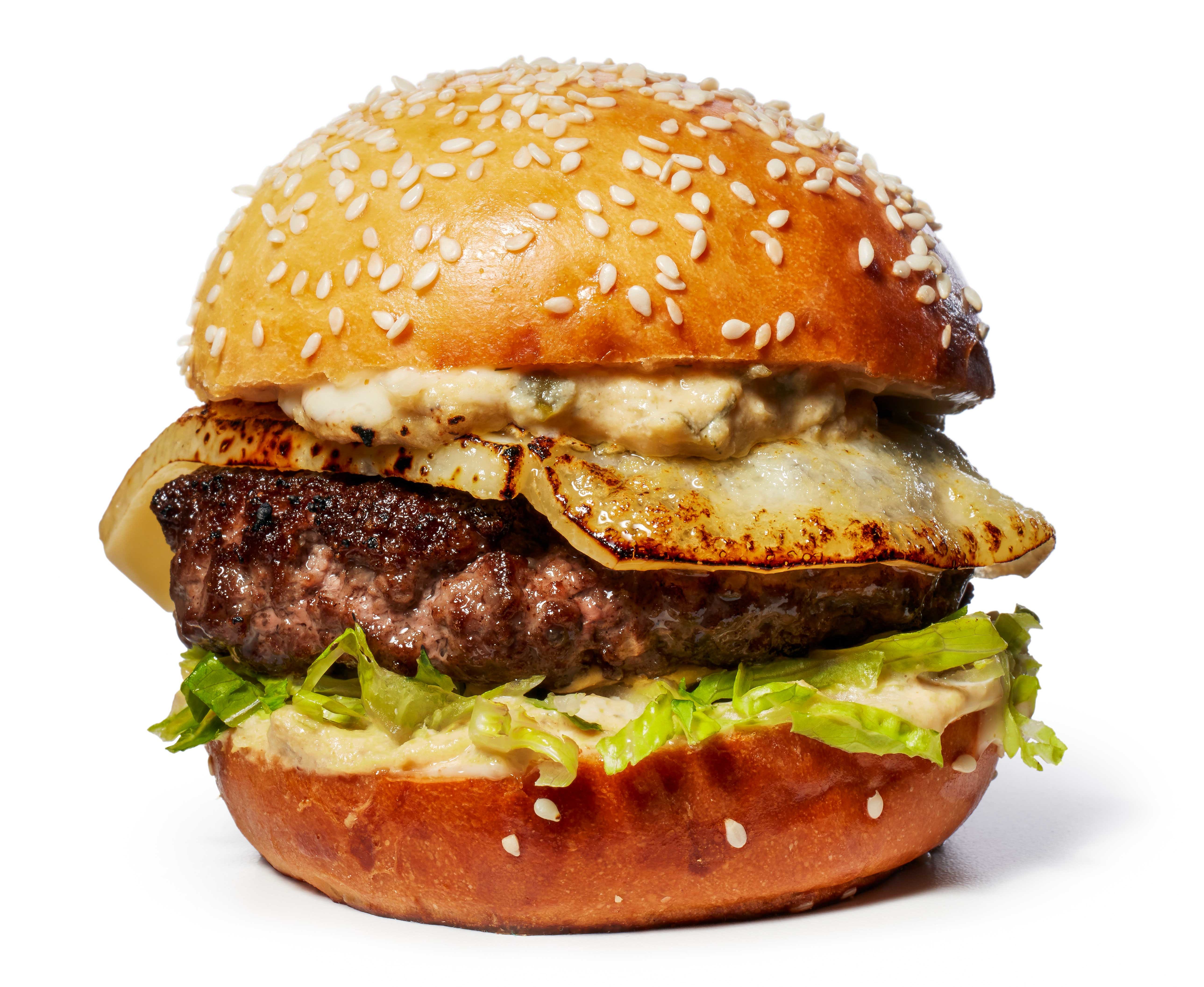 20 Beneath the glowing menu at this store-slash-lunch-counter, Julian Ochangco cooks up these appropriately named patties that are more like slabs of juicy meatloaf, topped with American cheese, Filipino-style tartar and shredduce on Martin’s potato rolls (bags of which you can buy in the shop). $7.50. 189 Wallace Ave., @peppers.189 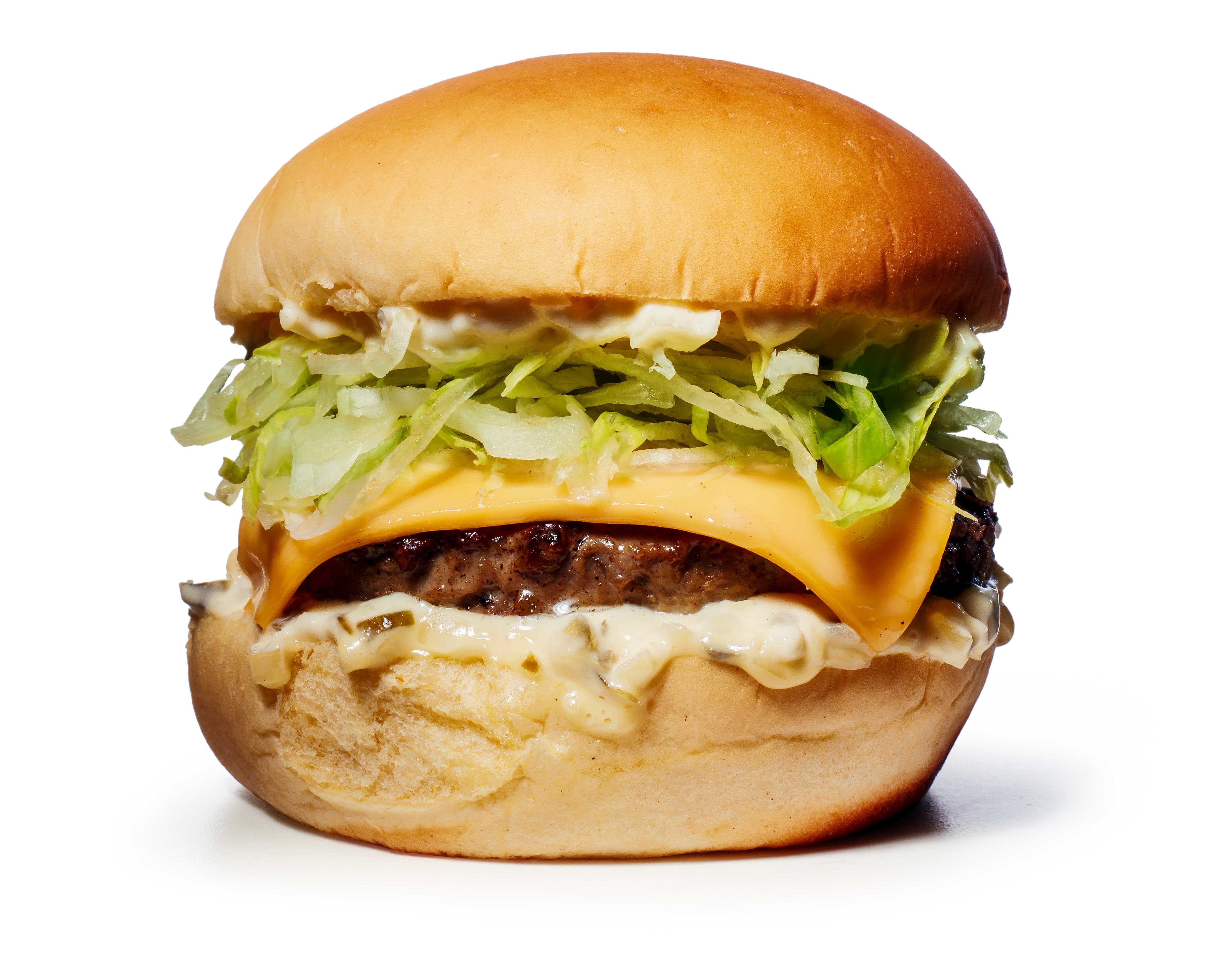 21 Desi burgers are ubiquitous throughout the shops of Little India, but the best of the bunch comes from this eponymous storefront with the red sign. The veggie version is a boldly spiced potato-and-herb patty buried under a canopy of chopped onions, tamarind chutney, chili sauce, mayo and a freshly fried egg. $4. 1342 Gerrard St. E., desiburger.ca 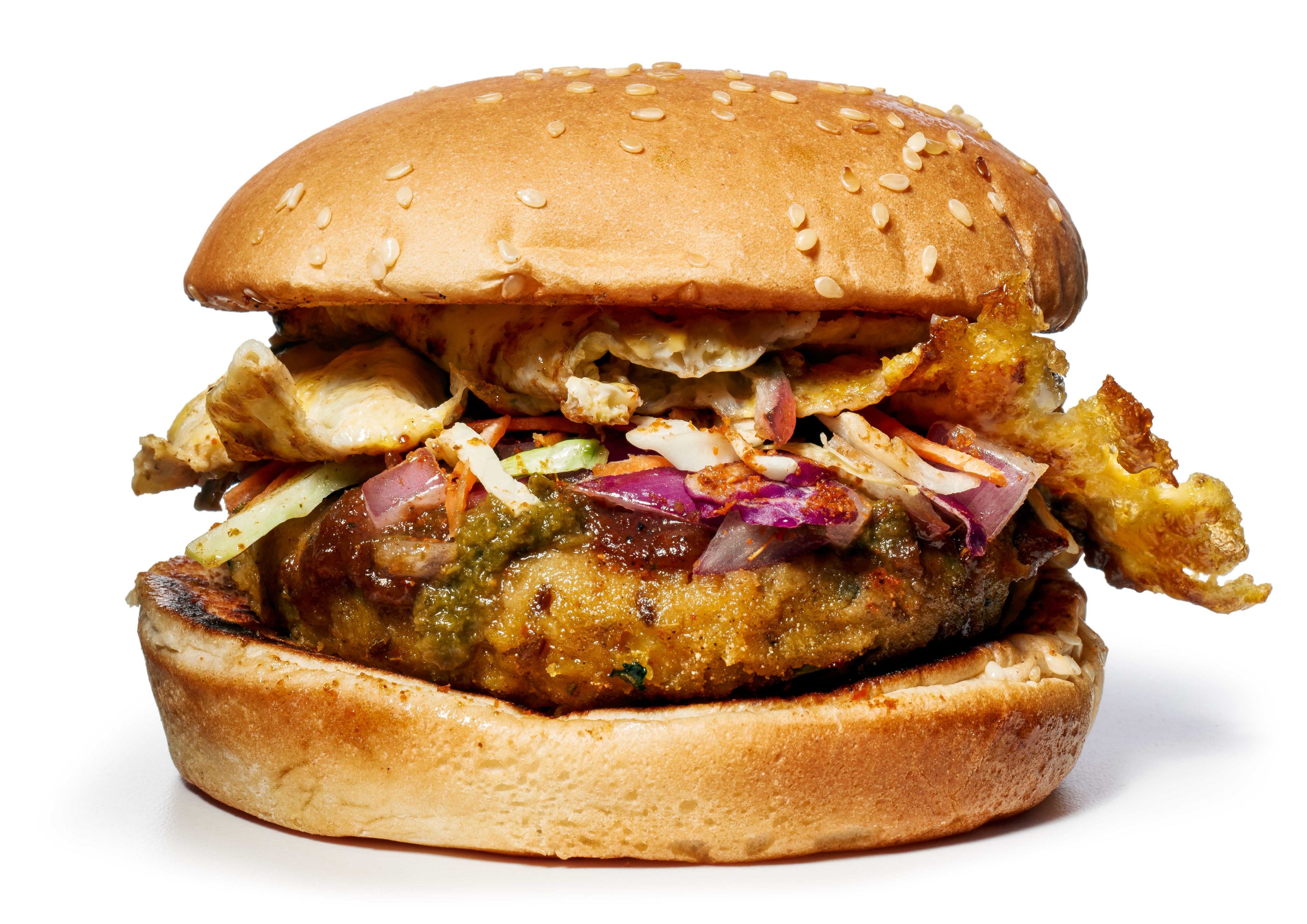 22 This Woodbine Beach burger joint serves a menu of nostalgia-laden patties smashed on the flat top. Chef Rob McKim’s meatless burger is such a marvel that you might need to check your order. It’s seasoned perfectly, smothered in cheddar and stacked with lettuce, tomato, pickle and—throwback-style—ketchup and mustard. $14.50. 1681 Lake Shore Blvd., ggsburgers.com 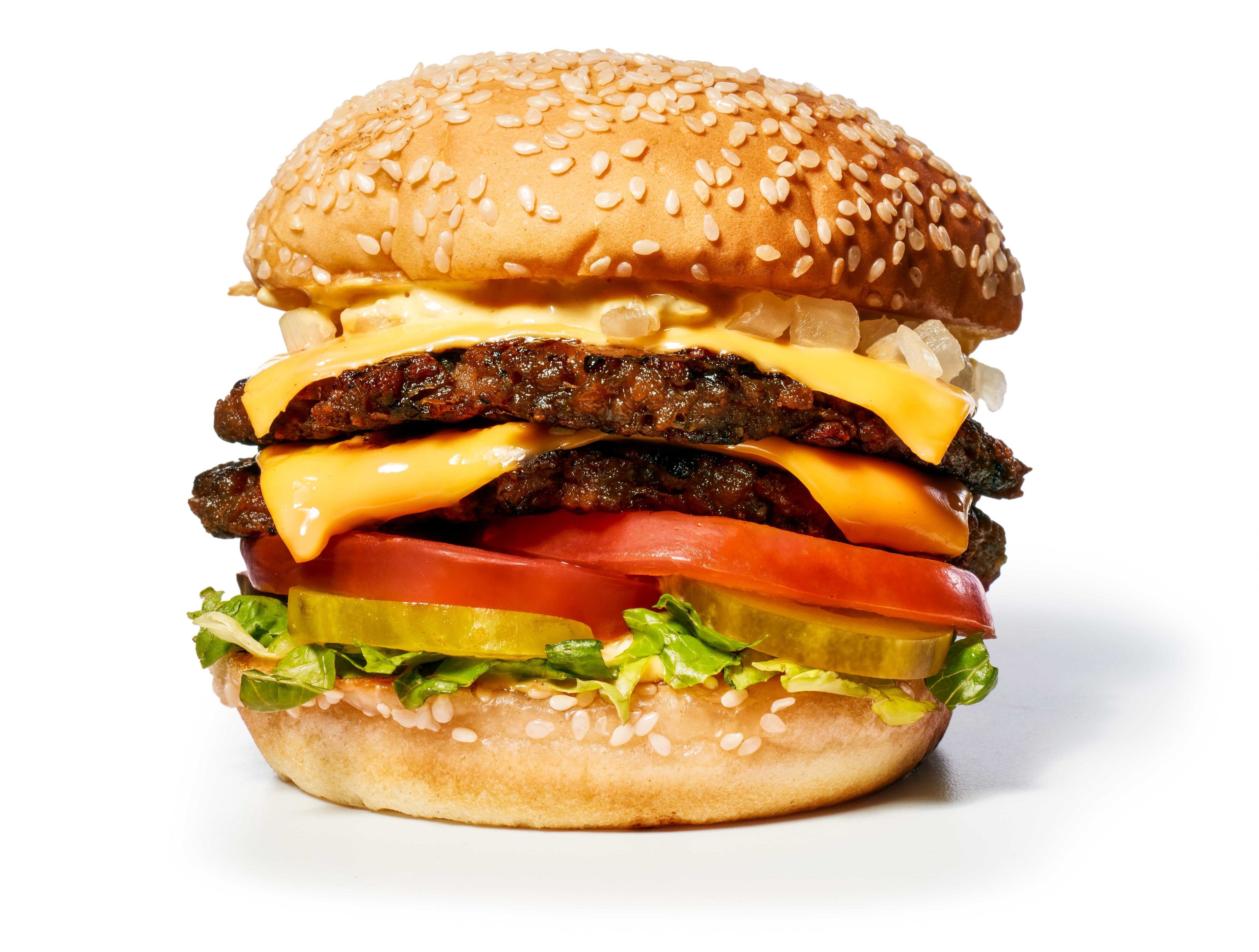 23 The burgers from this toro-inspired mini chain may border on Instagram bait, but the best compromise between ridiculous and ridiculously good is this double-patty creation that adds a puck of crusted cheese to the middle of the stack, along with beef bacon and creamy house sauce. $15.99. 348 Queen St. E., 424 Danforth Ave., 869 Dundas St. W., thebullger.ca 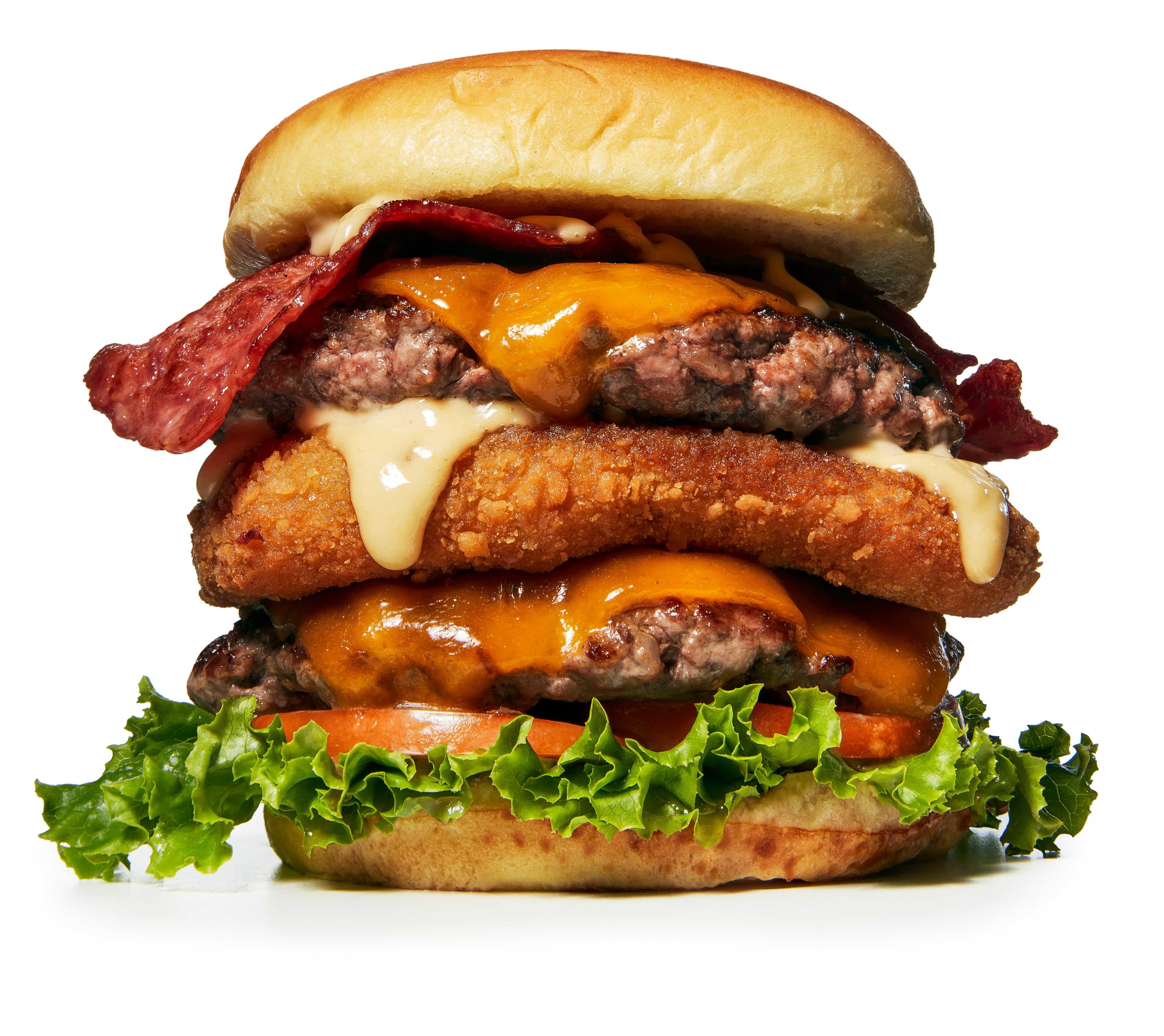 24 This takeout counter started life in Port Credit last year, and opened a second shop on Queen West soon after. They promise “just the classics” here, and they deliver: smash burgers topped with American cheese, shredded lettuce, tomato, dill pickle and house sauce on potato rolls. A single is the perfect size to save room for a side of fries and a shake. $8. 573 Queen St. W., rosiesburgers.ca 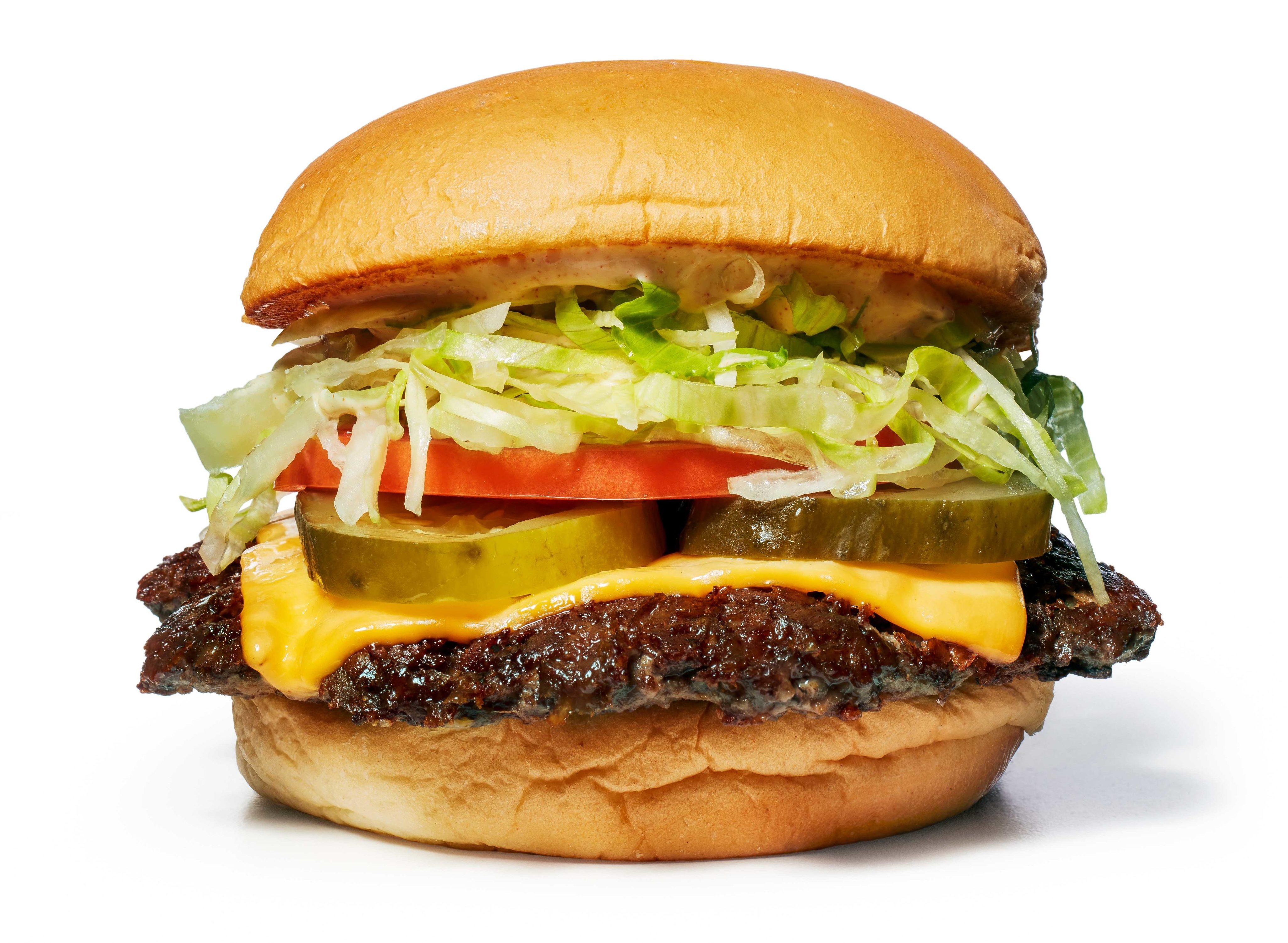 25 Chris Kalisperas opened this patty shop during the pandemic, when everyone was craving comfort food. One of his smash burgers is not like the others: along with the usual suspects (beef patty, cheese, onion, iceberg, pickles, secret sauce) and the Martin’s potato roll, there’s a pile of salty pastrami. It’s beef two ways and we’re here for it. $11.95. 76 Lippincott St., happyburger.ca 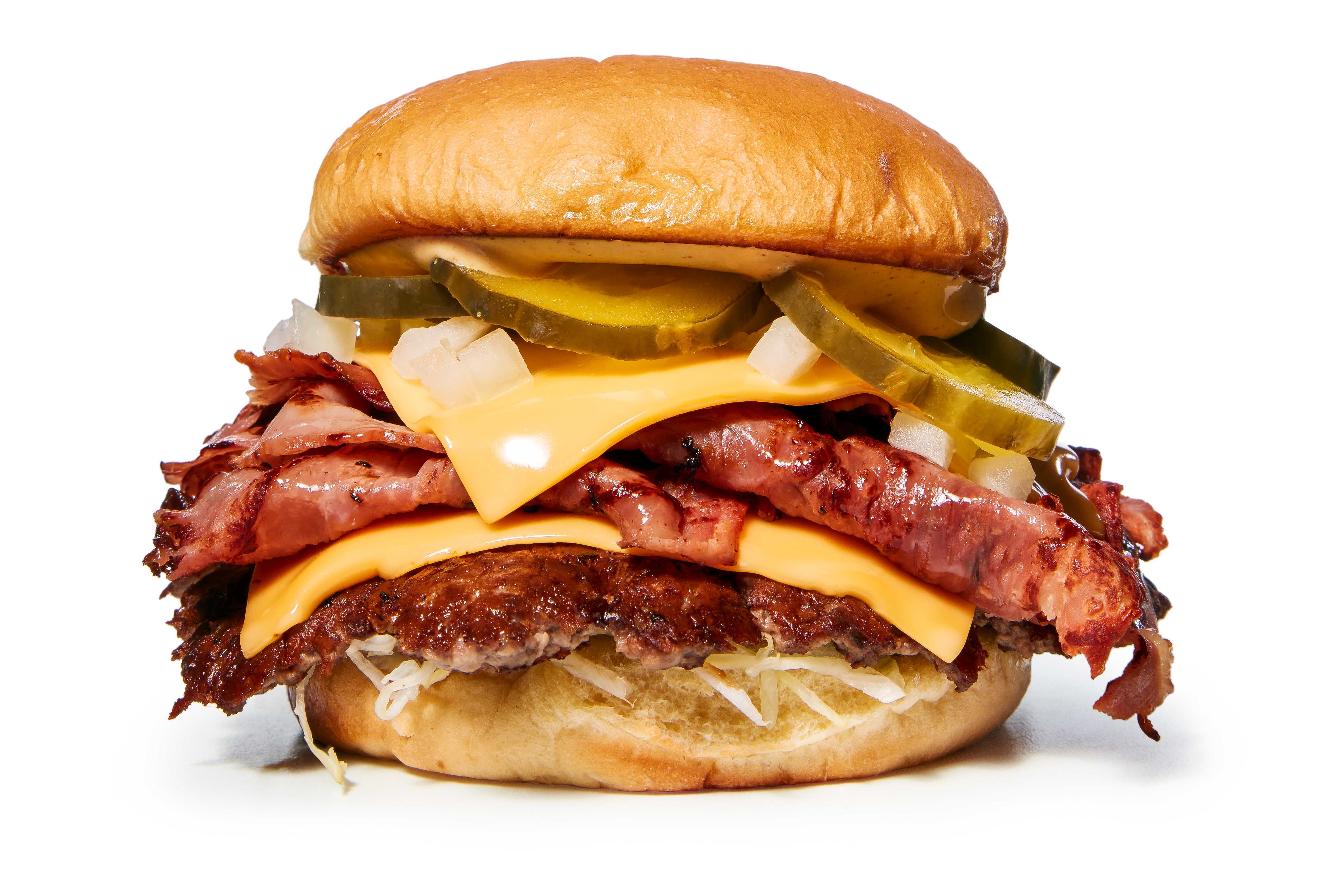 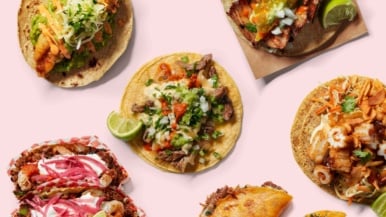