What’s on the menu at The Slip, Harbourfront’s new lakeside patio

What’s on the menu at The Slip, Harbourfront’s new lakeside patio

A lot of hand-held favourites (ribs, wings, burgers, sandwiches, fried chicken, corn on the cob) and one salad. Harbourfront CEO and Boxcar Social regular, Marah Braye, brought the Boxcar boys on board to replace the long-standing Lakeside Local with something geared towards a younger audience. The Slip is seasonal, but the team is already busy opening up a third Boxcar Social inside Harbourfront Centre that will operate year round.

Draught beer and cider including Labatt 50, Goose Island IPA and Brickworks’ Batch: 1904;Corona by the bottle (or bucket o’ bottles, of course); kegged cocktails available by the glass or pitcher; wine from Norman Hardie and Creekside; mixed drinks; and, because it’s a Boxcar offshoot, a selection of whiskey.

The lakeside patio looks like something straight out of 90210 or The O.C.—in the best way possible. There’s plenty of communal seating and a space for planned or impromptu dance parties. 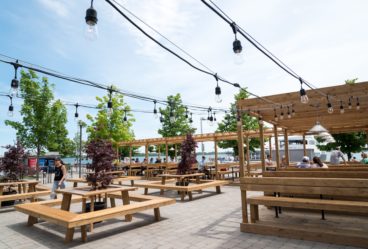