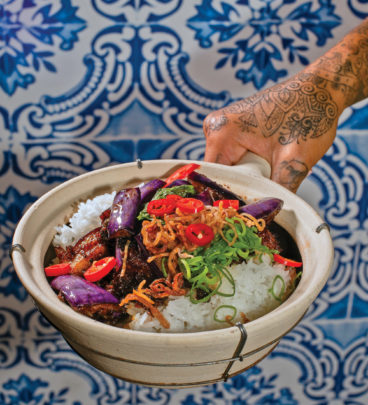 A guide to the city’s most enticing meatless meals

In 2019, plant-based dining made the leap from specialty niche to the gobsmacking ubiquity of Tim Freaking Hortons. There are many reasons why, including the uncanny valley of simulated meat products like Beyond Meat, now available with your double double; the mainstreaming of veganism, fuelled not only by moral concerns over animal welfare but by the dawning horror that our society’s appetite for meat is actively killing the planet; and the growing number of chefs eager to put as much care and creativity into a turnip or an eggplant as a prime steakhouse cut.

All this means that for committed vegans and vegetarians, flexitarians looking to lean more into their greens, and curious omnivores alike, it’s never been easier, tastier or more satisfying to fill up on vegetables.

Every Tuesday and Wednesday night, Soos, Ossington’s excellent Malaysian restaurant, goes vegan, serving a menu of chef Tricia Soo’s plant-based takes on maki, okonomiyaki, curries and even satay. The rendang is made with pulled oyster mushrooms, and the aromatic curry—shot through with lemongrass, coconut and Malaysian chili—is so mind-bogglingly delicious, even the most carnivorous of carnivores wouldn’t miss the meat. The murtabak, two Frisbee-sized rotis sandwiching spiced chickpeas and onions, is another standout—the proverbial cherry on this cake being the creamy garlic sauce you spread on top. Opting for the $40-per-person menu lets guests try a little bit of everything, and it’s the way to go. 94 Ossington Ave., 416-901-7667, fatchoito.com

Mythology For the charcuterie board 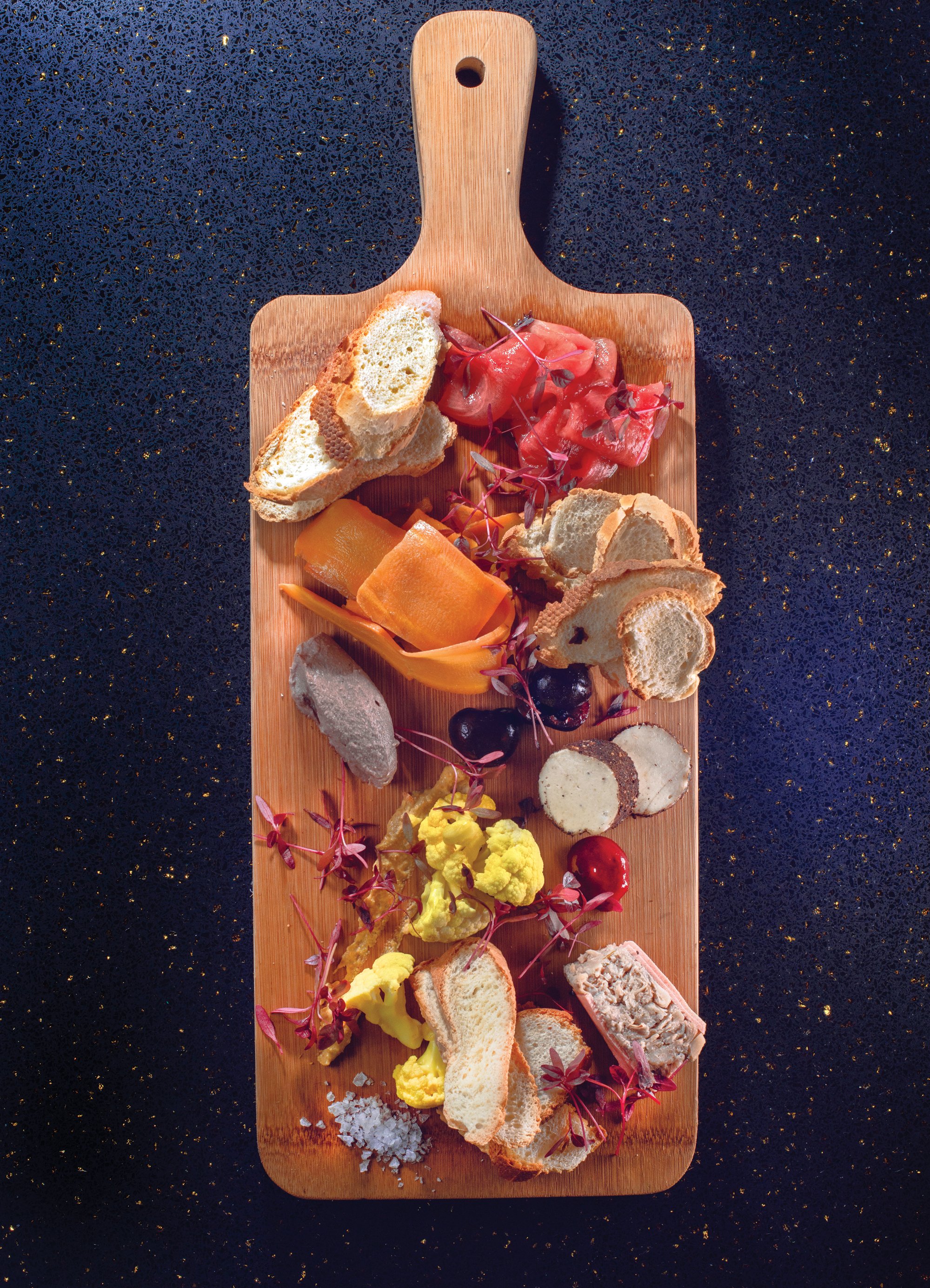 Chef Doug McNish recently gave his plant-based Parkdale diner a makeover. Gone are the eggless Bennies and plant-based pastrami sandwiches. In their place are small and sharing plates, like a tartare of smashed avocado and marinated tomato, king oyster mushroom “calamari” and a braised seitan version of coq au vin. It’s grown-up vegan food. There’s even a charcuterie board chock full of vegan spreads and cheeses, including pâté de campagne made with jackfruit, carrot gravlax and cashew goat cheese. It’s all even more convincing when paired with the platter’s accoutrements, like pickled local veggies, berry compote and sourdough crostini. Order a couple of glasses of organic vegan Prosecco (no, not all wine is vegan) and you have yourself one romantic meatless meal. 1265 Queen St. W., 416-533-7539, mythologytoronto.com

Rosalinda For the meatless Mexican 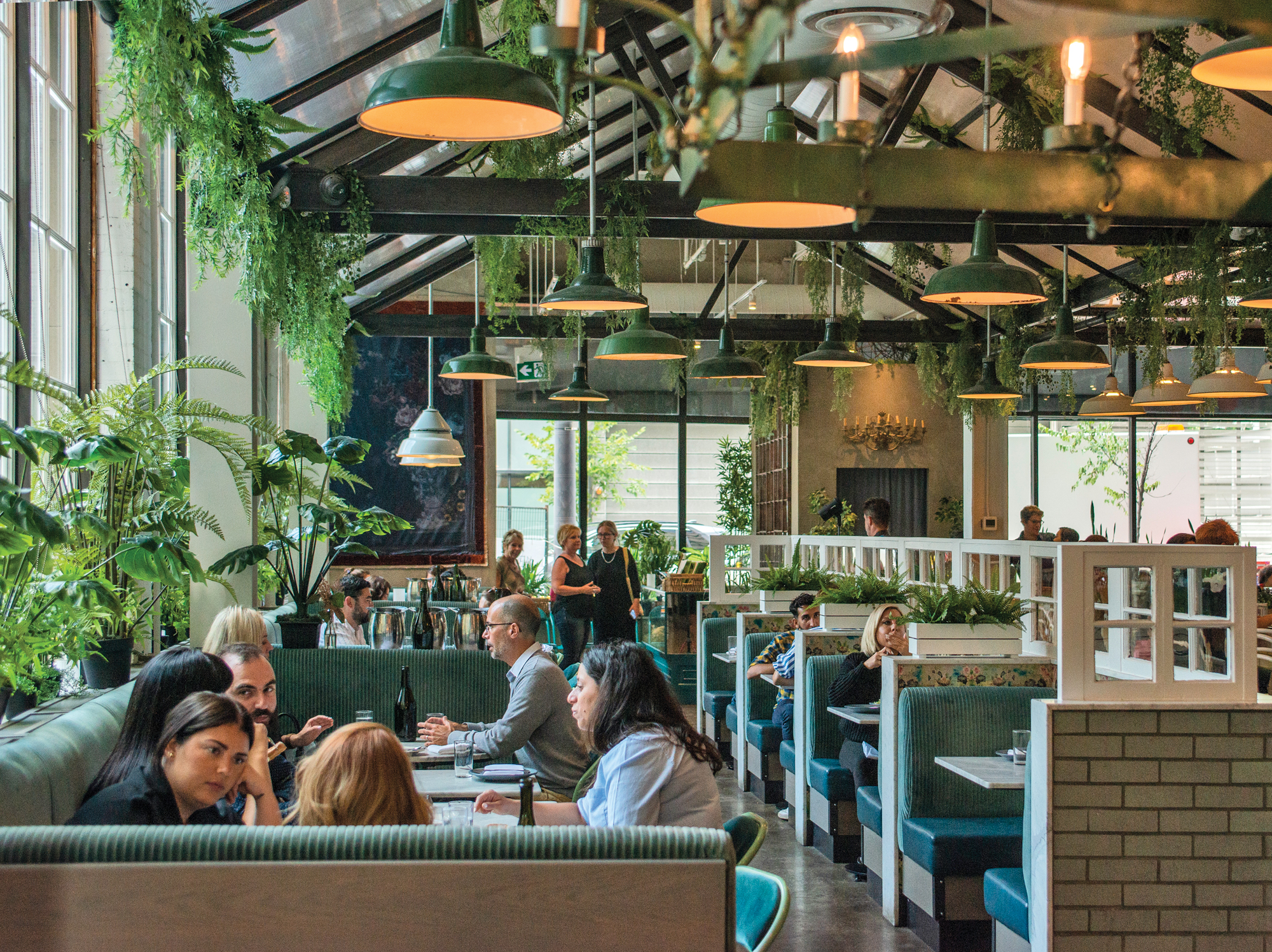 At the Financial District’s plant-based Mexican restaurant, chef de cuisine Matt Ravenscroft doesn’t try to turn beets into beef or chickpeas into chicken. As he puts it, “Vegetables are cool even when they’re not trying to be meat—they’re just rad in and of themselves.” So the coconut ceviche doesn’t go by any other name; the same goes for the jackfruit pibil and mushroom al pastor tacos. For the cauliflower tostada, he loads a deep-fried tortilla with a flotilla of crunchy florets, almonds and pickled chilies on a layer of sikil pak, a nutty spread made with toasted pumpkin seeds. One exception to the name game is the “chorizo” rojo taco, piled with saucy crumbled tofu and a pico de gallo of crisp cucumber cubes, finished with a smoky poblano tomatillo salsa. 133 Richmond St. W., 416-907-0650, rosalindarestaurant.com 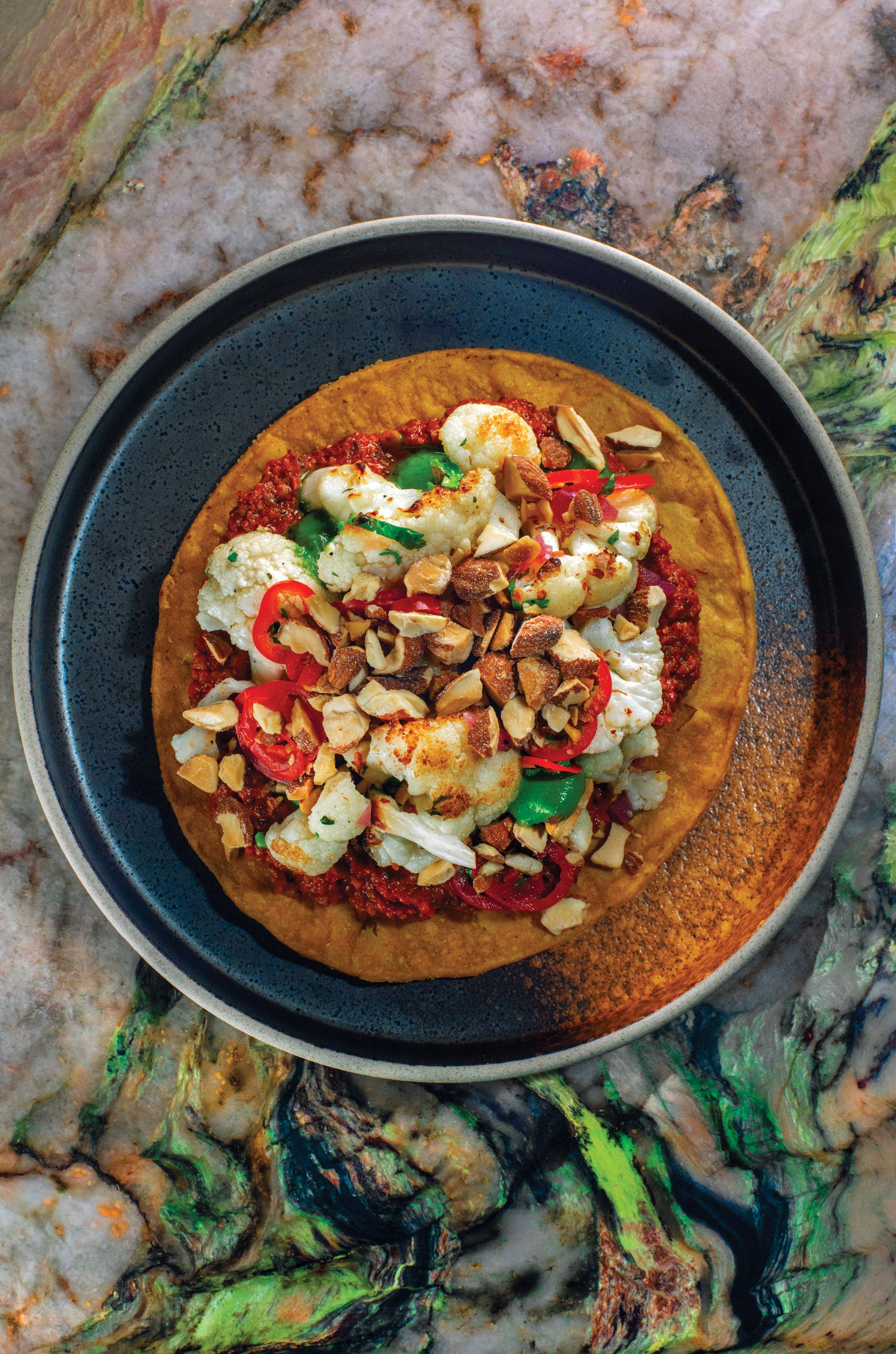 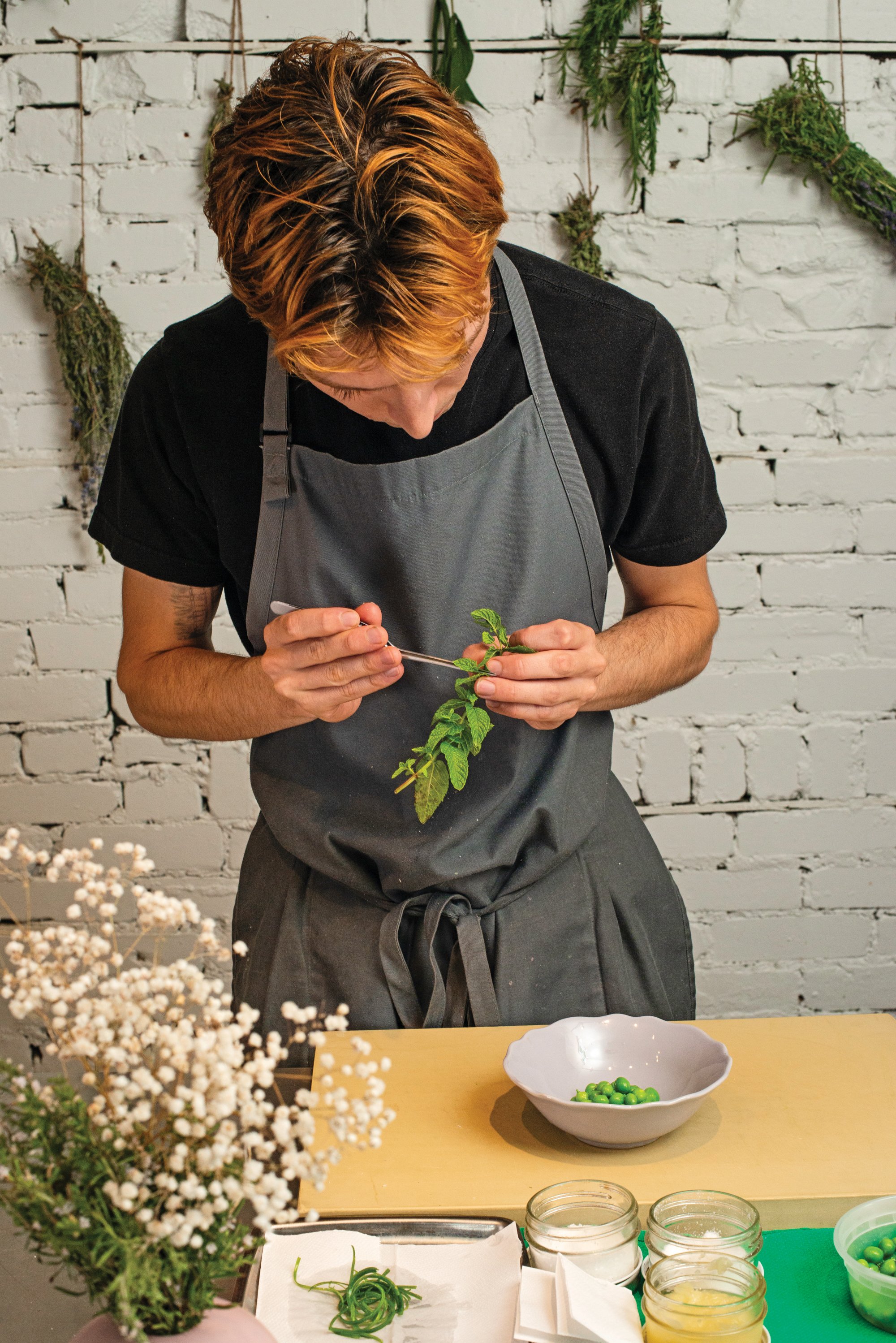 Chef Julian Bentivegna calls his Brockton Village 10-seater “vegetable forward”—not strictly vegetarian or vegan, but a green gateway for diners looking for a special-occasion meal that’s more plants than prime rib. Bentivegna’s handiwork is on full display in the open kitchen, lit like a stage, as he navigates a 10-course micro-seasonal menu that changes every few weeks. One thing that doesn’t change: his compositions—green peas and white chocolate; tomatoes, hyssop and melon—are deftly prepared with the chops of someone who has cooked in some of Toronto’s best kitchens (Alo, Daisho) and at Chicago’s late, great three-Michelin-starred Grace. It’s hard to find a surer pair of hands on the season’s best produce. 1132 College St., 416-538-3810, 10restaurant.ca 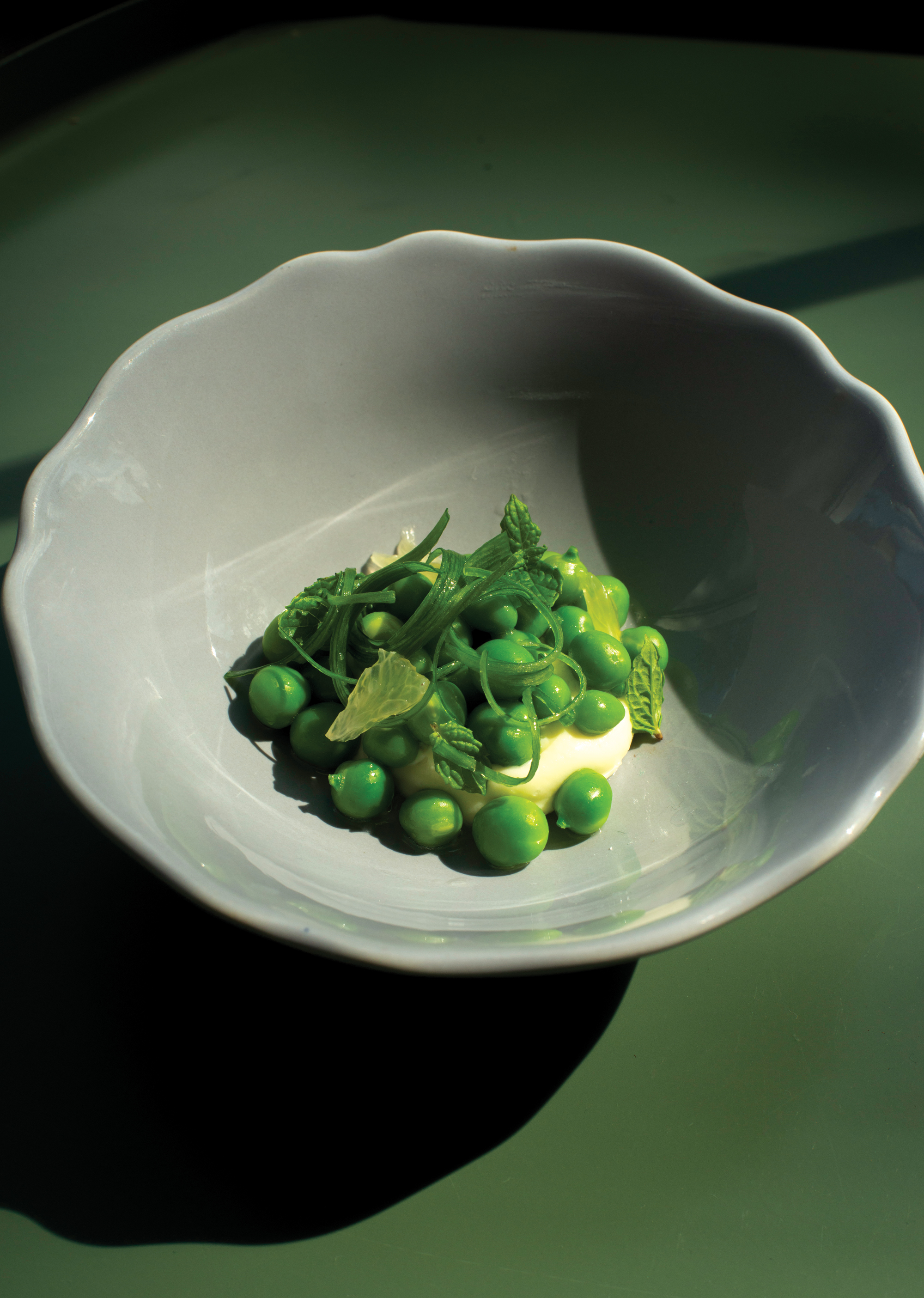 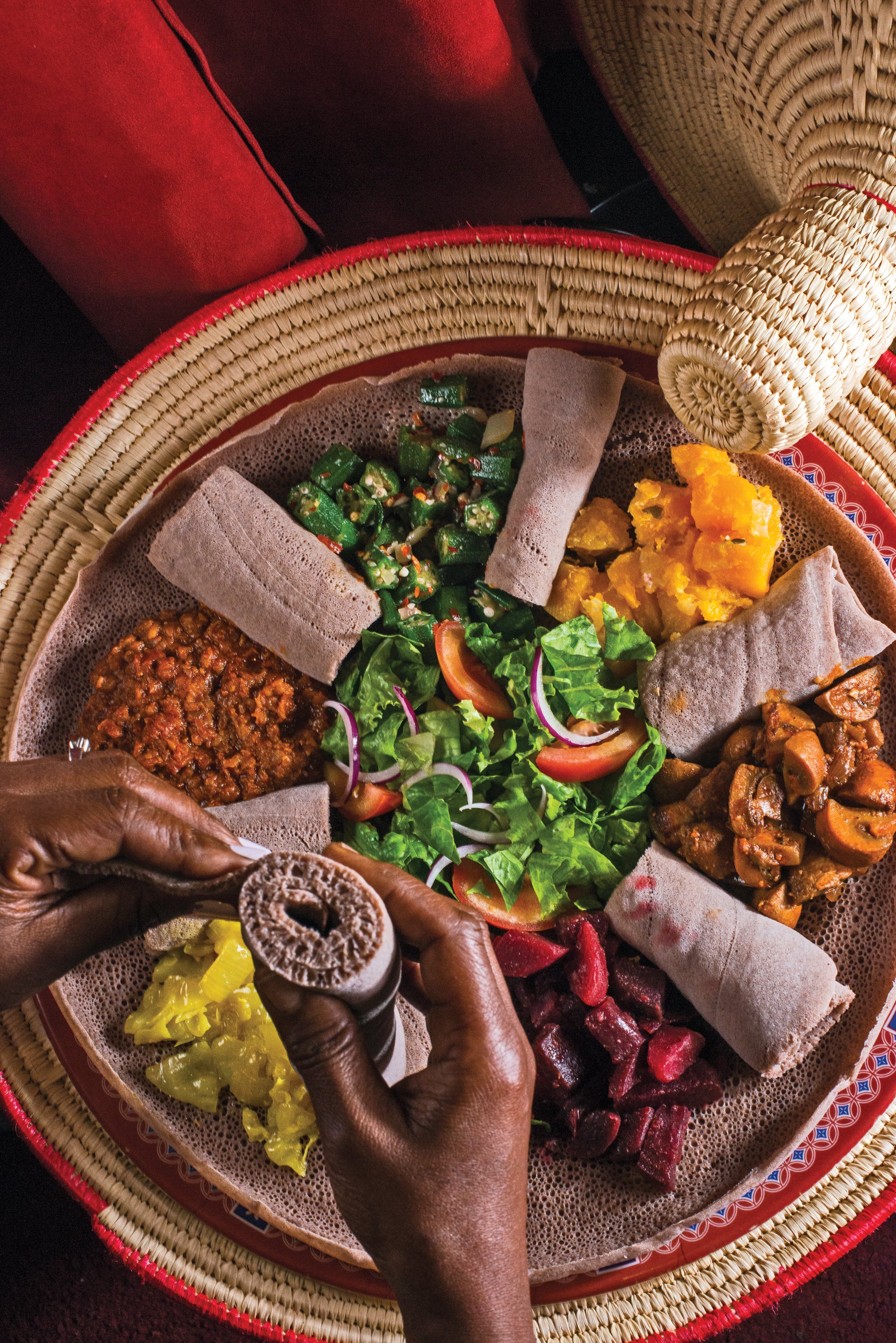 Most Ethiopian restaurants already have a food terminal’s worth of veggies on the menu, but Bloorcourt’s Pero takes it to the next level, operating a strictly plant-based outpost out of their basement bar, serving entirely vegan dishes either à la carte or buffet-style. The vegetarian platter for two is a kaleidoscopic combination of six items, plus spongy injera, its cratered surface perfect for soaking up all the sauces. The teff-based flatbread comes rolled up like tasty little sleeping bags, tucked between a mushroom-based take on dullet, spicy okra tibsi, rich timitimo tsebhi (berbere-spiced lentils) and an earthy beet-and-potato mixture. Unroll the injera, rip, dip and repeat. And then roll yourself out the door, full and happy. 812 Bloor St. W., 647-344-7225, selamrestaurants.com

Shook Kitchen For the super-fresh mezze and pita 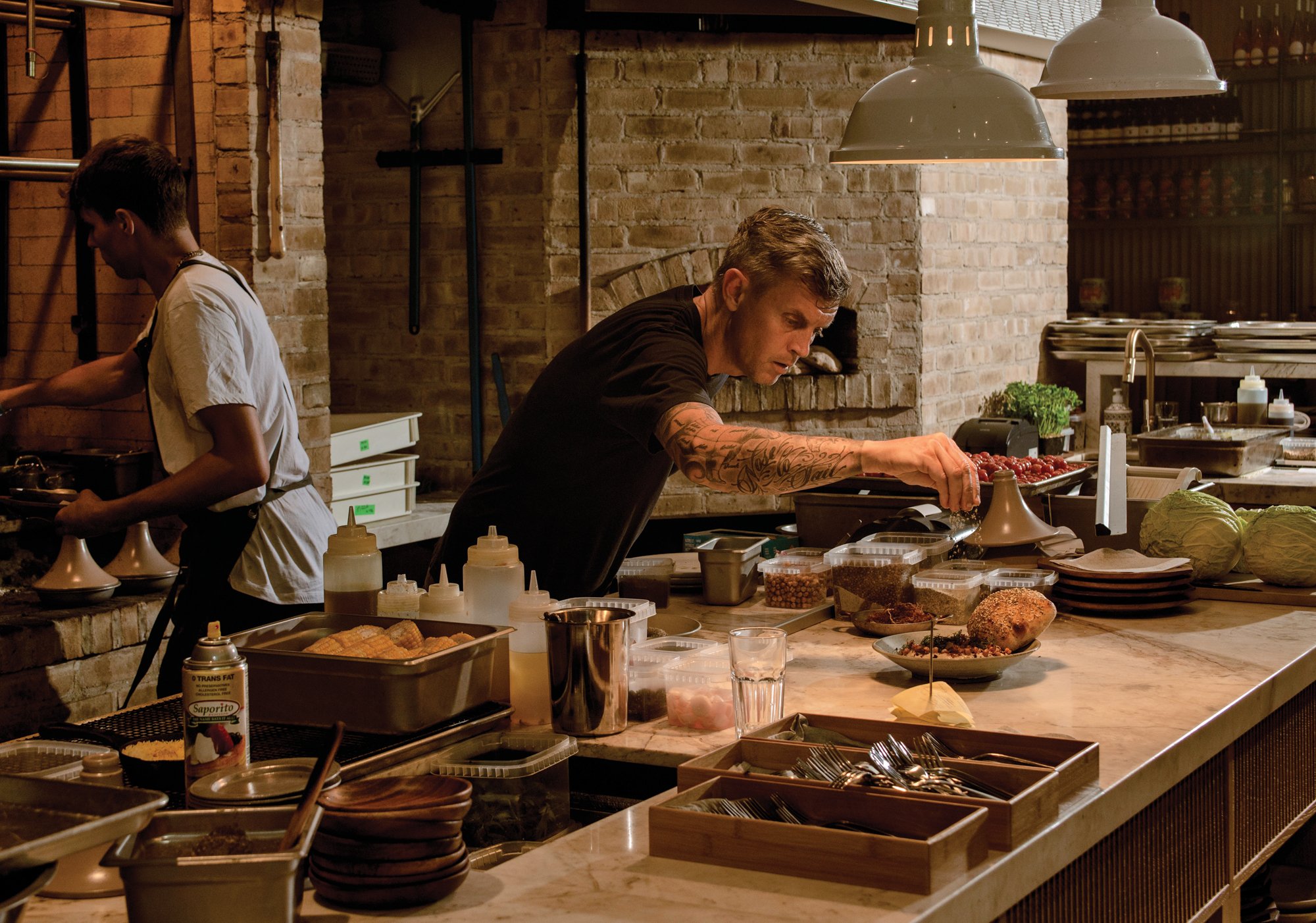 It doesn’t tout itself as a haven for vegetarians, but a scan of the menu at this Israeli-inspired King West kitchen confirms it: there’s no meat to be found here. Two ever-burning fires are used to cook just about everything, from two kinds of shakshuka to a hearty eggplant-mushroom kebab. But the heart of any meal should be the mezze: moutabbal made with burnt eggplant and roasted garlic; zaalouk, with burnt tomato and caramelized shallot; or smoke-free affairs like the house-made labneh sprinkled with mint and olive oil, and whipped feta with cherry tomatoes and Turkish chilies. They’re all served with za’atar-dusted, hot-from-the oven pita rounds that are among the best in town. 77 Portland St., 647-484-7476, shookkitchen.com

Woodlot For a fire-roasted vegetarian feast

The wood-fired oven powers the menu at this Little Italy restaurant. Make that menus, plural, because alongside a meat-focused menu is an equally robust vegetarian menu that relies on nothing more newfangled than the simplicity of fresh ingredients and an elemental approach to cooking. Even for dyed-in-the-wool meat eaters, dishes like a tangled pyramid of ember-grilled mushrooms with wild rice; turnip stuffed with roasted oats and pistachios atop sweet peas; and handmade agnolotti with sweet corn are worthy of a true omnivore’s dilemma. 293 Palmerston Ave., 647-342-6307, woodlottoronto.com 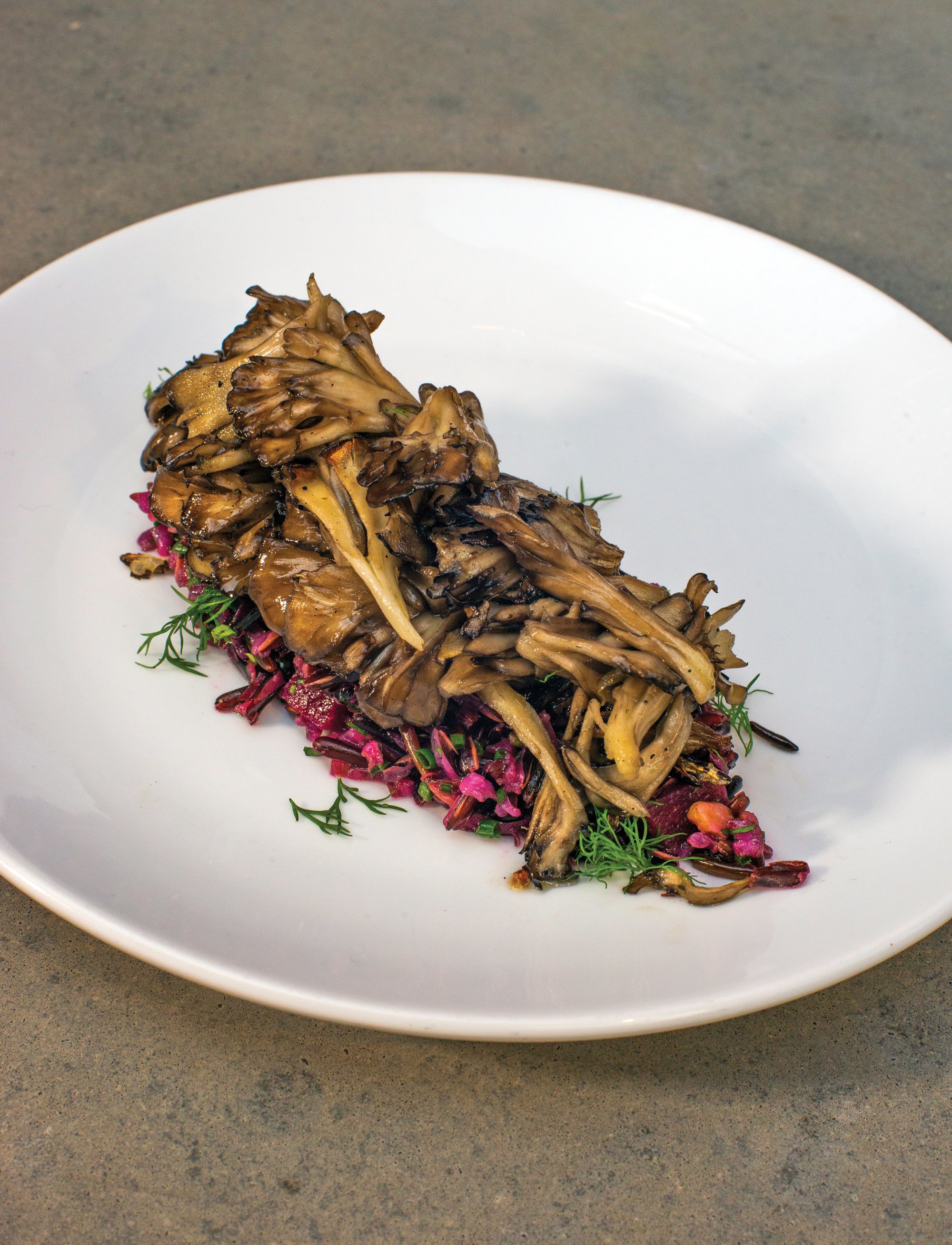 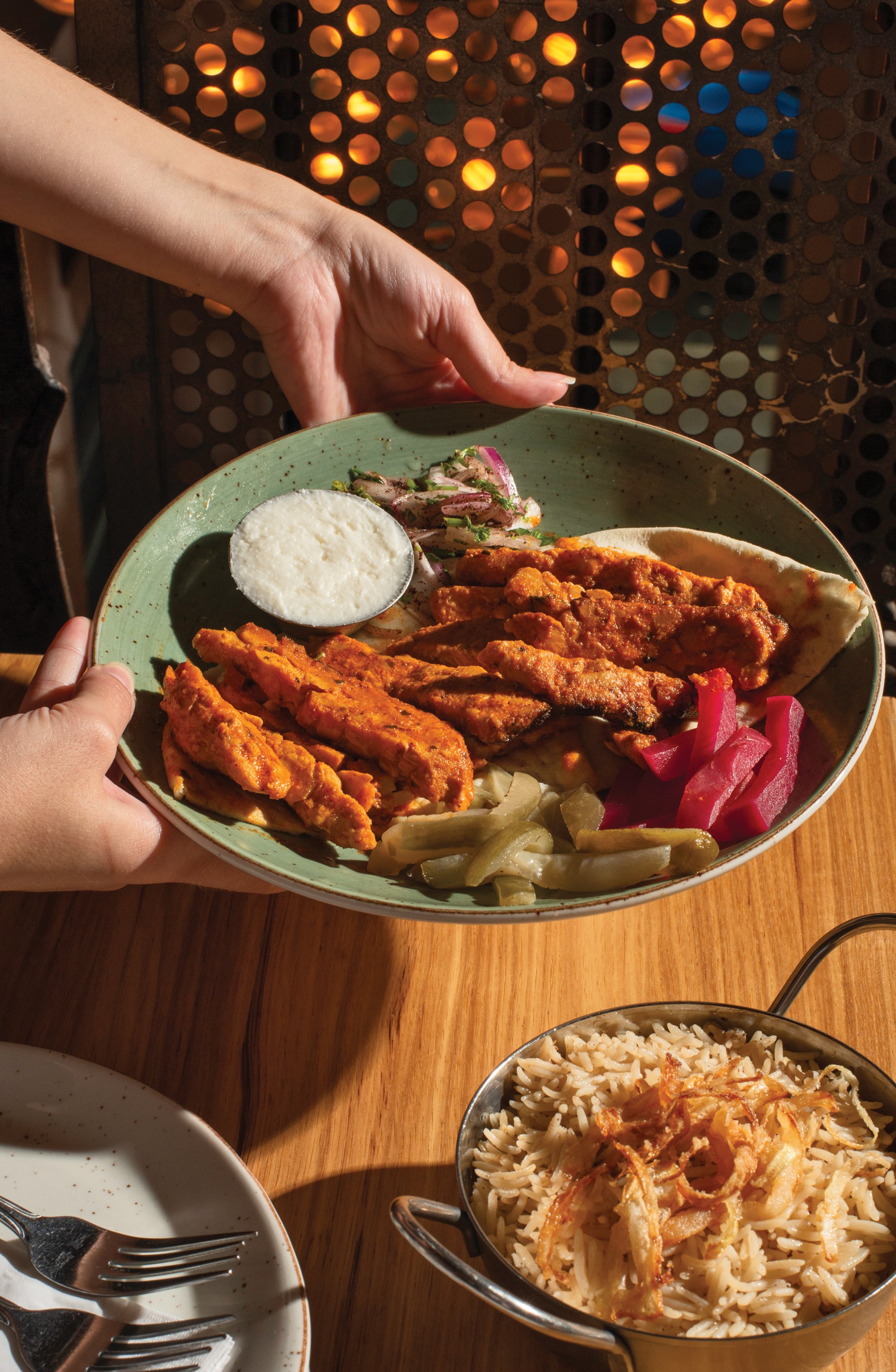 It’s not sliced from a rotating tower of spiced, glistening meat like the rest of its global shawarma brethren. But the soy-based chicken shawarma at Paramount Fine Foods is otherwise a dead ringer for the Middle Eastern staple. It’s available in a wrap or as part of a platter, and when it first lands on the table, it’s such a convincing take—in texture and in seasoning—that it’s almost unfair to call it an approximation. You may find yourself asking the server to confirm that what’s on the plate is truly meatless. 253 Yonge St., 416-366-3600, paramountfinefoods.com 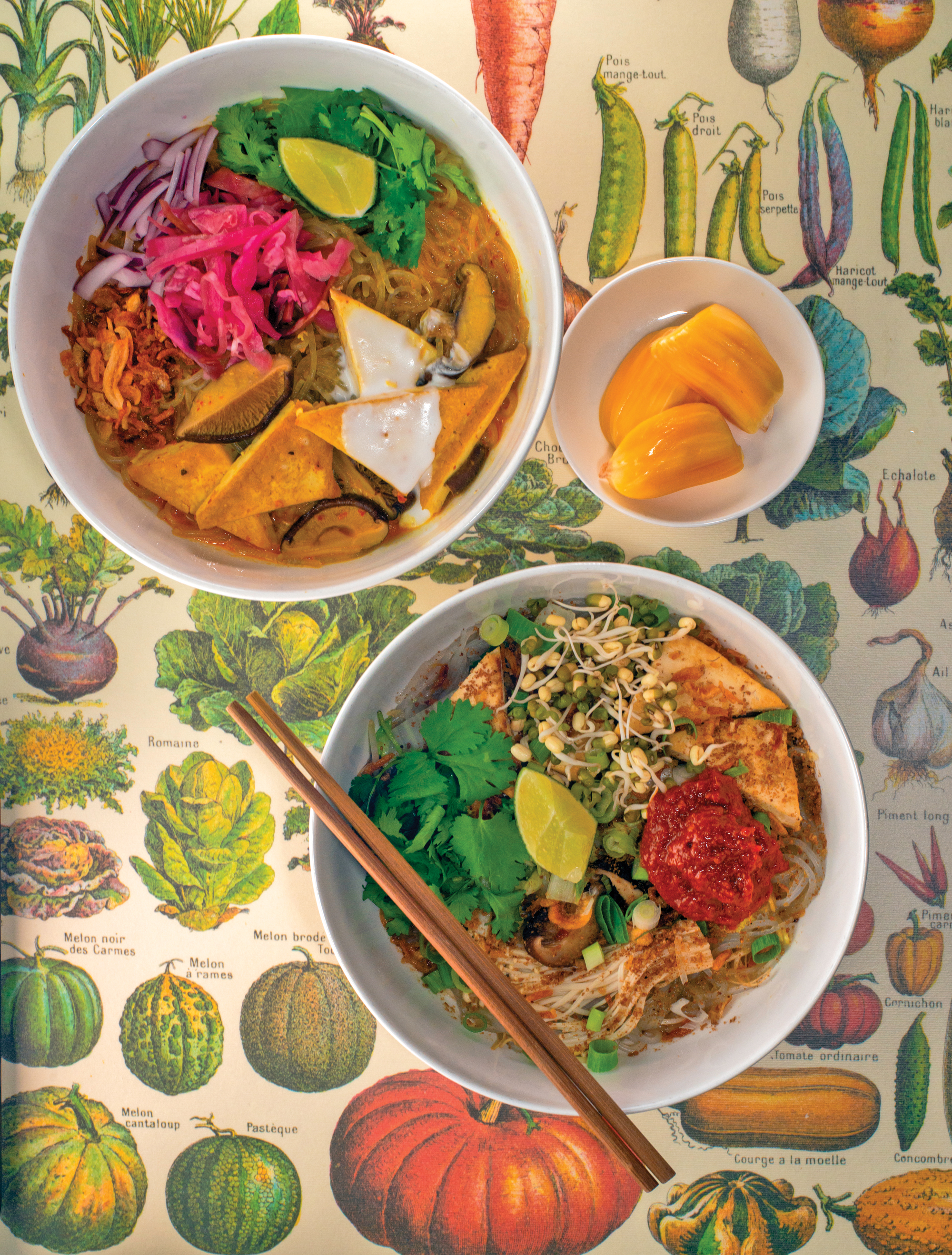 At this new takeout spot a short hop from Bathurst Station, Anchan Chaiyakul and Asa Copithorne—partners in business and in life—churn out totally plant-based takes on Thai dishes. Tofu and tempeh replace meat here, and Chaiyakul and Copithorne use things like dulse, as well as various kinds of mushrooms and that magical vegan ingredient, nutritional yeast, to replicate the umami punch of fish sauce and shrimp paste, key ingredients in Thai cuisine. We love the fiery papaya salad (with a house-made vegan fish-sauce substitute), the sweet-and-sour tom yum over sweet potato noodles, and the khao soi, a box of creamy, coconutty goodness (over those same slippery noodles) that’s offset by the tang of crunchy pickled cabbage. 793 Bathurst St., 416-535-3886, mugi.ca

Arthur’s For new-school takes on the classics 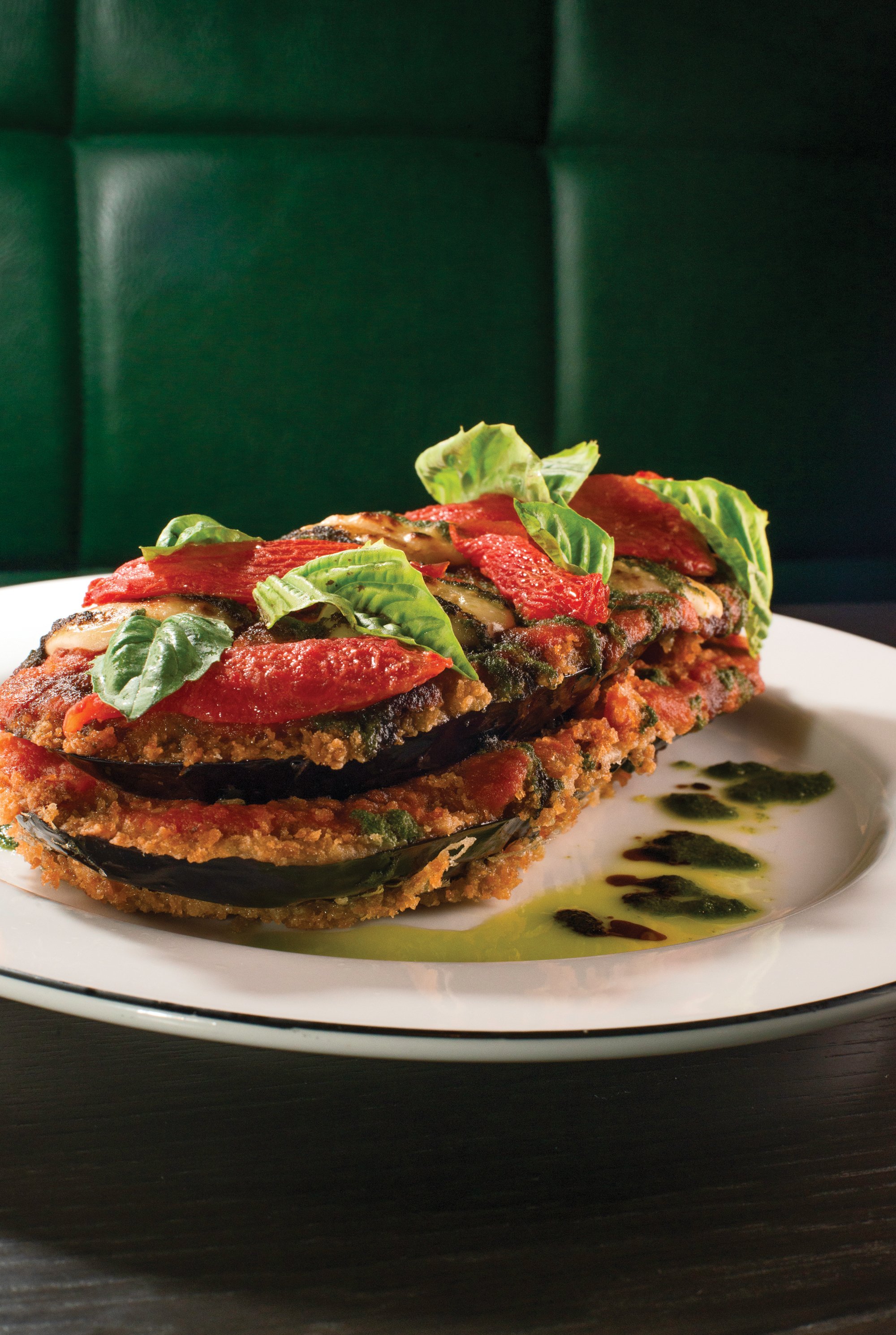 This midtown throwback pays homage to a time when clams casino, dover sole and veal chops were staples of upscale dining. But for those hungry to relive the past while dining in the culinary present, a full quarter of the menu here is intentionally plant-based. That includes a crispy double-decker eggplant parm made with cashew mozz; pasta alla vodka finished with almond parm; and a creamy pâté made not with offal but mushrooms, glazed with a tangy-sweet port wine gelée. 12 St. Clair Ave. E., 647-348-7000, arthursrestaurant.ca

For some, a weekend just isn’t complete without a visit to Rol San, the Pearl or Crown Princess, for carts piled high with baskets of har gow, rice noodle rolls and soup dumplings. But Planta Queen serves up a different kind of dim sum every Sunday afternoon. Here, chef David Lee sends out meat- and dairy-free dishes that replicate the dim sum experience for people living that plant-based lifestyle. In a setting way sleeker than your average Chinese banquet hall, guests chopstick their way through spicy kung pao eggplant, umami-packed cubes of XO tofu, crispy veggie-stuffed gyoza, addictive “chickn”-fried chanterelles and heaping bowls of dan dan noodles and pineapple fried rice dotted with curry cashews and goji berries. And the meatless, mushroom-based Mac Bao, slathered in sweet hoisin sauce, does a nice job of standing in for those other buns. 180 Queen St. W., 647-812-1221, plantarestaurants.com 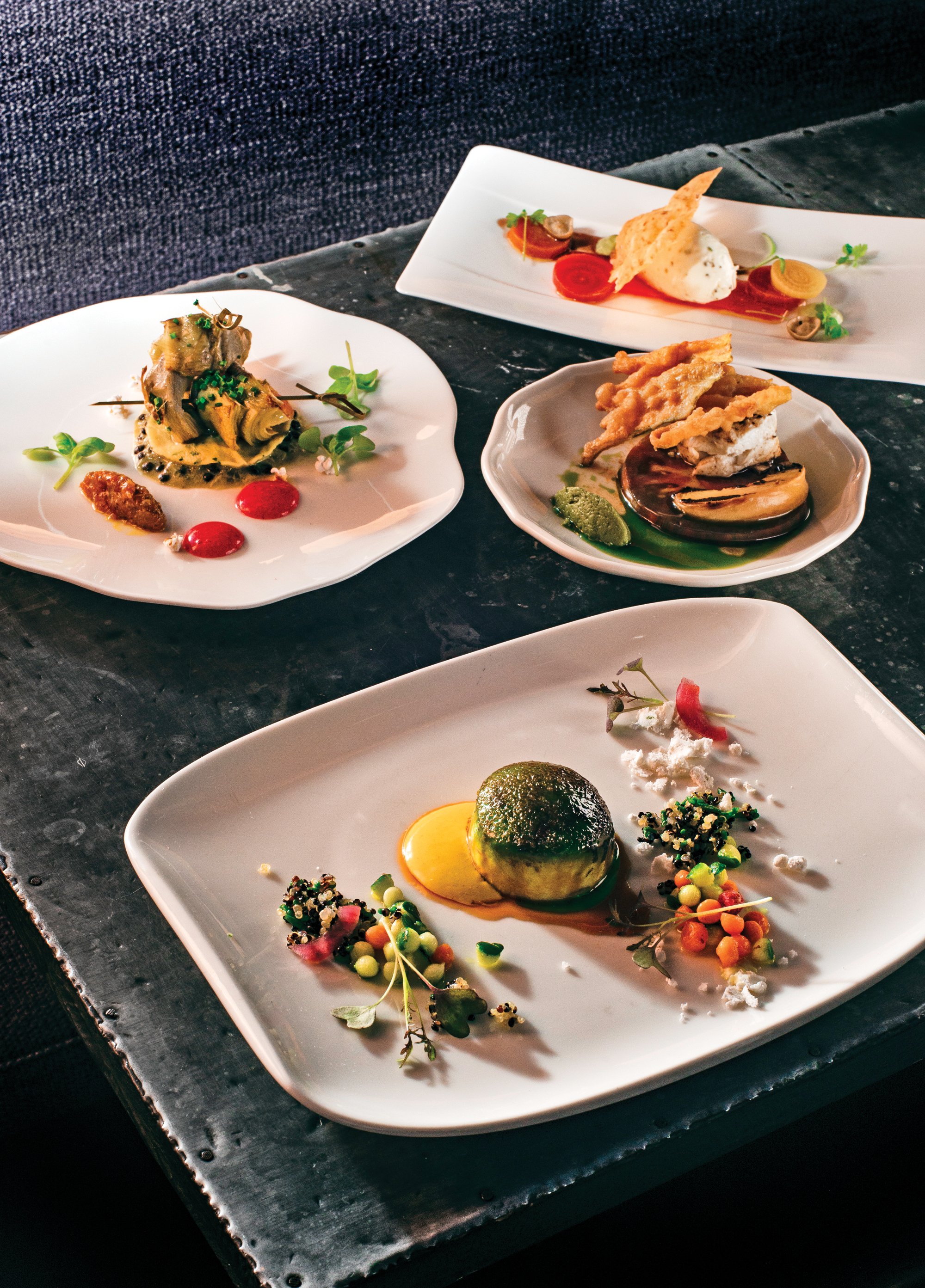 Queen East’s George is one of the city’s fine-dining classics. But it takes a progressive approach to herbivorism by presenting not simply a number of vegetarian options, but an all-vegetarian tasting menu—with optional wine pairing, of course—to rival the fine-dining heights of its standard offering. Notions that a special-occasion meal should be the domain of foie gras and fatty cuts of wagyu are discarded by standouts like a brûléed avocado with saffron couscous; cherry tomato orecchiette with fennel and Tuscan kale; and a standout zucchini and tomato ratatouille, which are all as much a feast for the eyes as the palate. 111C Queen St. E., 647-496-8275, georgeonqueen.com 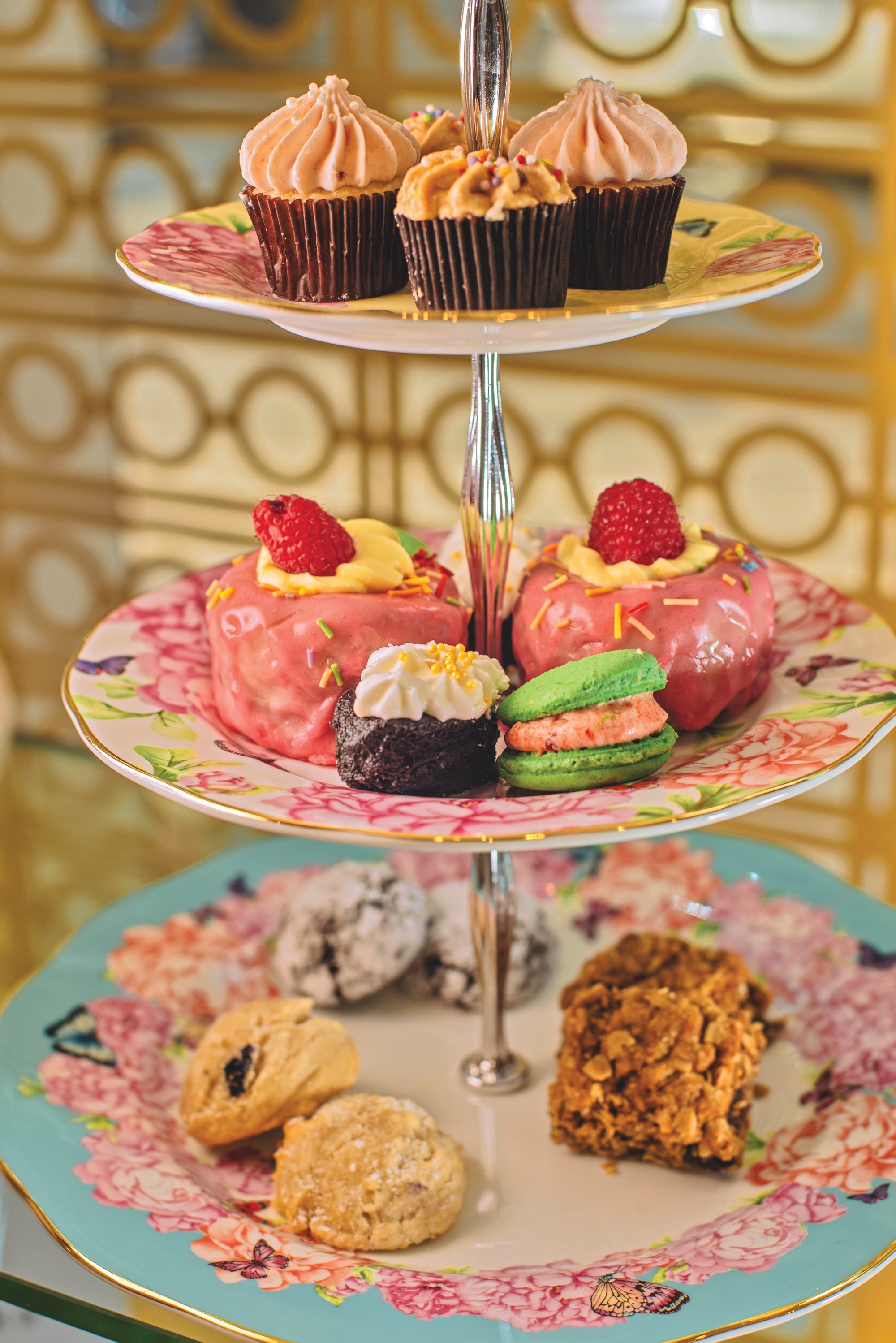