15 new restaurants to check out in March

15 new restaurants to check out in March

Where to find ceviche, pancit, deep-dish pizza and the perfect omelette right now

Join us tonight for dinner at Baro! With infused cocktails & amazing plates from @latino5spice, we've definitely got something for everyone! Walk-in tables are available and we'd love to see you tonight! [? : Baro Sour + Tiradito Ceviche] 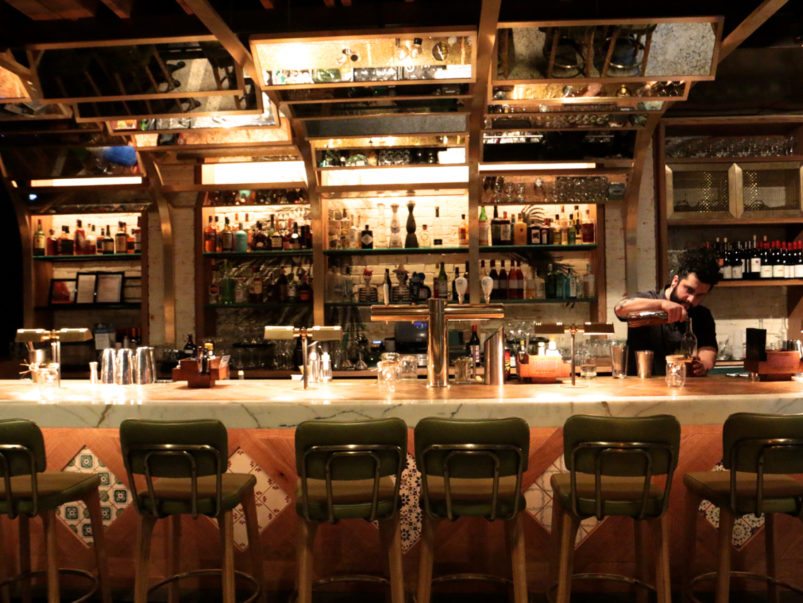 What’s on the menu at Baro, King West’s new Latin American compound with a password-protected lounge

Chef Steve Gonzalez has turned Valdez, his too-loud street-food party on King West, into a polished Latin American restaurant that suits the 40-plus crowd, as well as the neighbourhood’s young, moneyed partiers. The three-storey space is now one of the strip’s most inviting. As for the menu, Gonzalez amped up the raw seafood selection and refined the mains, which are satisfying Latin staples with Italian or Asian flourishes (though dishes dappled with nori and edamame can be skipped). A flight of five ceviches includes a subtle and sweet concoction of shrimp, mayo, ketchup, horseradish, avocado and lime. Ropa nueva, a Cuban classic, is tender braised beef in chili-kicked jus alongside a heroic square of creamy yuca gratin. Tropical-tinged cocktails, like the Baro Sour, made with two kinds of pisco, are a lot of fun—especially with a bowl of house-made chips and guac.

This jack-of-all-trades spot, tucked away on a residential stretch of Gerrard, is worth seeking out. It’s homey, casual and practical, with a section devoted to pantry essentials: butter, milk, produce, baked goodies, coffee, and gorgeous bread from Petite Thuet. In fact, chef Adam Weisberg previously worked with Mark Thuet, and his French training shows. A perfectly roasted marrow bone is made even better with a layer of crunchy golden crumbs and a couple of pinches of tangy gremolata; lightly smoked, silky-smooth chicken liver pâté is divine with crispy toasts and apple-pear compote. A succulent braised beef cheek comes on a velvety pool of celeriac purée, topped with a tempura scallion and sake-ginger gastrique; and a ramekin of buttery roasted root veggies is garnished with mild harissa yogurt and sweet-and-spicy pecans. The beer list is impressive for a 25-seat local, with plenty of craft brews and interesting imports available on tap and by the bottle. Salted chocolate chip cookies from the café counter should satisfy any sweet teeth.

With just shy of 30 ciders on the menu, this former curry house has been transformed into a cozy den outfitted in barn board walls and vintage license plates. Toque-wearing diners throw back flights of Ontario cider and tuck into gravy-soaked pub grub, like Newfie fries, loaded with seasoned breadcrumbs that taste like holiday stuffing, mushroom gravy and peas so perfectly blanched they pop. A massive helping of pork schnitzel (though it also comes in rib eye, chicken and eggplant versions) is sided with smashed, double-baked and breaded, cheesy, spicy potatoes, and a choice of four gravies. Butter chicken with basmati and naan is a hold-over from the joint’s previous incarnation—sadly it’s more sentimental than sensational.

This new project from the team who brought us the city’s first Mexican-Korean restaurant combines a Filipino kitchen with a Cuban bar. The red pleather booths and round bar stools of the spot’s previous tenant, the Whippoorwill, remain, but they’re joined by a pressed tin ceiling, sugar cane bunches and a graffiti Guernica. Kinilaw, the Filipino answer to pesce crudo, has all kinds of potential, but falls flat from lack of seasoning, as does an order of kare-kare, thick chunks of tender beef in a coconut and peanut sauce. Noodle dishes are the way to go here: the pancit pusit (cuttlefish ink noodles with a whole grilled baby octopus) is a springy, brightly seasoned treat. Much is made of the various mojitos on offer—“best in the city” the menu touts—but they’re too watery to warrant seconds.

menu development. there will be no more updates of the menu. Come check them out soon. 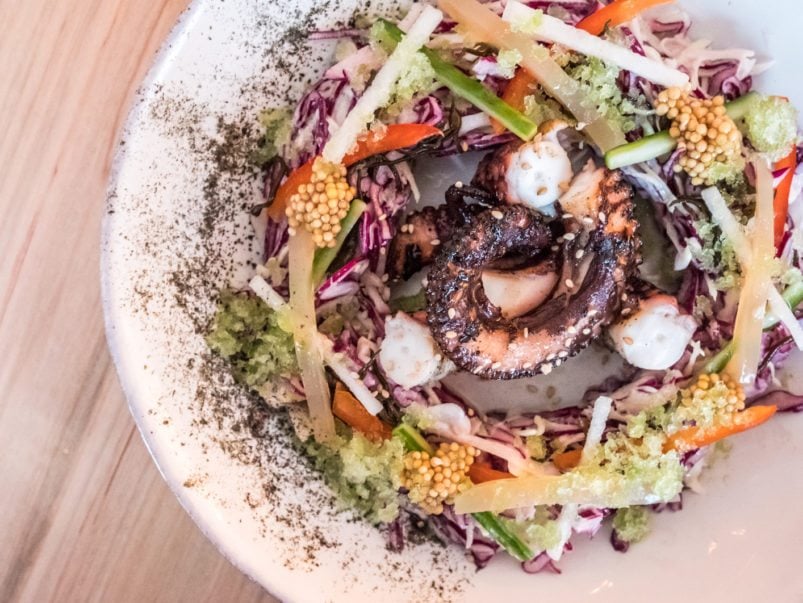 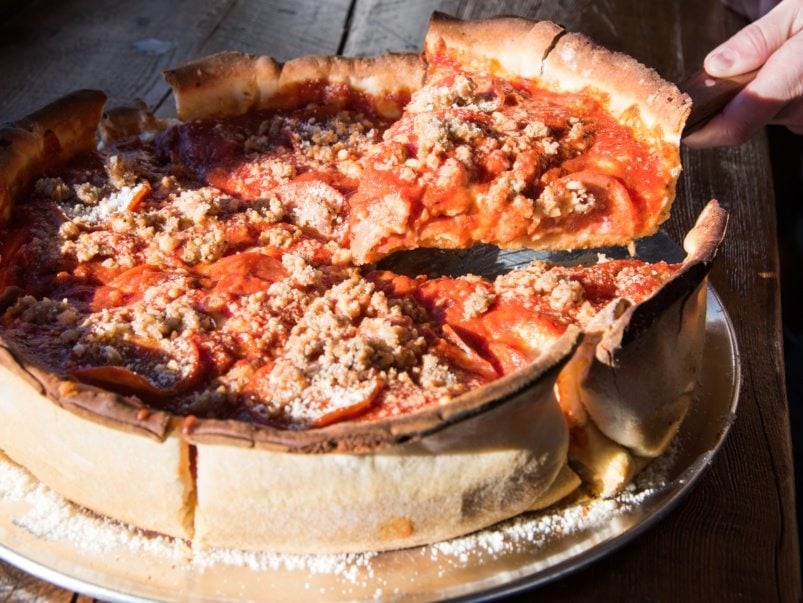 Touted as Toronto’s only Chicago-style deep-dish pizza, this 25-seat spot has been standing room only since it opened its doors. These over-the-top ooey-gooey pies are perhaps a reaction to years of Neapolitan domination over the city’s pizza scene. Customers can create their own pie or choose one of three pre-designed ones crammed with molten pizza stuff three inches deep, including the Jalapeno Blue chockful of blue cheese, jalapeno peppers, bacon and Italian sausage. Unfortunately the crust containing it all is hard—not bready, porous or spongy—just hard. A bank of electric pizza ovens spews heat into the tiny dining room; thank goodness for cold draft beer, and fresh air courtesy of a constant stream of take-out customers. The vibe and aesthetic is rough and tumble with graffiti art, kids’ colouring sheet pizza portraits and a couple of big screen TVs. Schoolhouse pendant lamps hang over the simple wooden bar, and a hot-pink neon glow adds to the fun atmosphere of this Chucky Cheese for millennials.

Eurobass en croute. Fish is deboned and salt crust removed before serving, then dressed with a yuzu beurre monté at the table. Thanks to @torontolifemag and Renée Suen for the great photo and making us look so good! Link to the story in profile! #la? 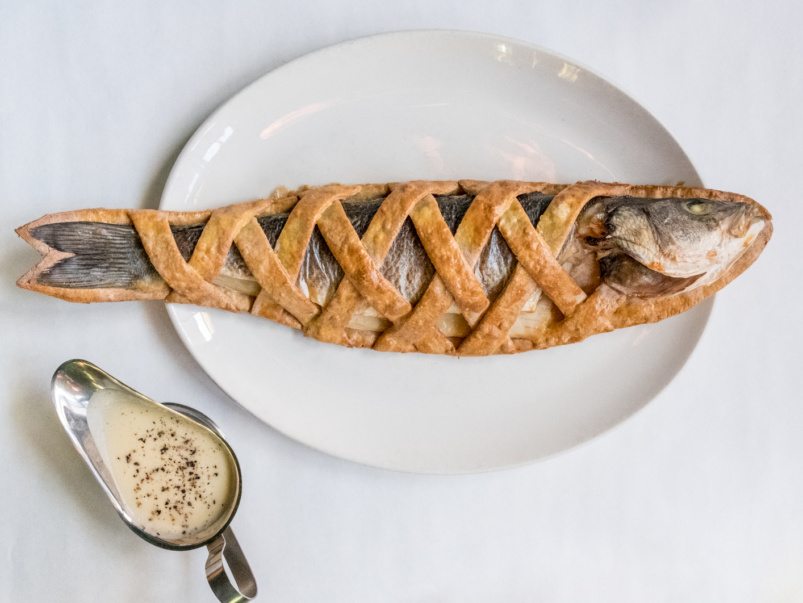 Chef Brandon Olsen’s foray into French cuisine delivers both expertly rendered classics and unexpected twists. The prominent raw bar accurately forecasts that seafood is the Ossington restaurant’s strength. A whole European sea bass wrapped in a pastry crust will attract the most attention from neighbouring tables, but a slab of lake trout—its flesh buttery and pink, its burnished skin the texture of glass—should steal plenty of headlines, too, plated with a flood of Peruvian aji amarillo sauce that’s swimming with caviar and fingerling potatoes.

But Olsen and fellow chef Basilio Pesce (Porzia, Cheese Boutique) save their best kitchen magic for a canoe-shaped log of duck breast that could almost pass for beef, and a perfect French omelette—with a 30 gram hit of caviar for an $80 surcharge. The eye-catching delights carry on from pre-dinner cocktails, which are boozy, to dessert, a selection of tarts and gateaux, including one bostock-like beauty baked with the restaurant’s titular fruit. And then there’s the Ziggy Stardust Disco Egg, a $50 paint-splattered chocolate ovoid that reveals nine delicate chocolate truffles when smashed open with a spoon. Like the restaurant, it’s just as much fun as it sounds. 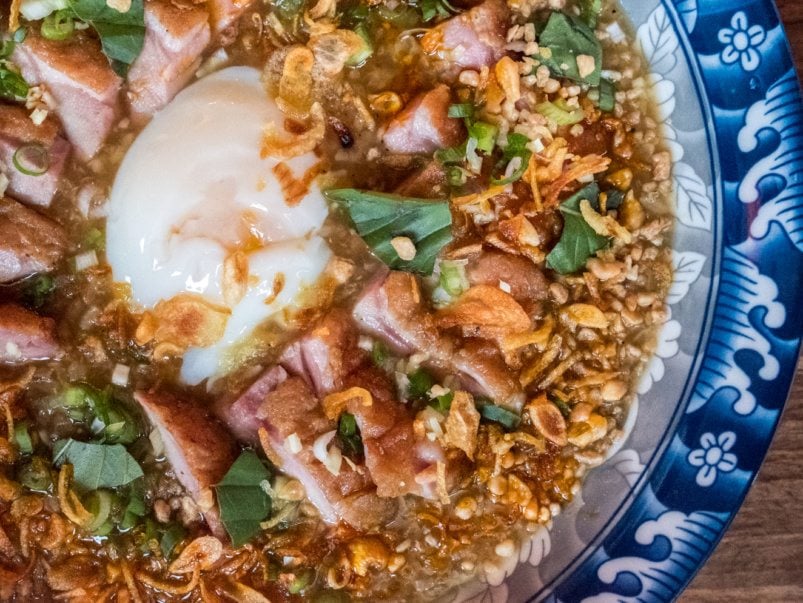 What’s on the menu at Lake Inez, a pan-Asian restaurant and craft beer bar with Robbie Hojilla in the kitchen

A gastropub in Little India named for a Michigan lake, with a Byzantine mosaic (of British artists Kate Bush and Virginia Woolf), serving a pan-Asian menu somehow feels very Toronto. Robbie Hojilla’s best dishes—a refreshing Thai winter vegetable salad with a zippy fish sauce and chili-based dressing, or his B.C. snapper curry with squash and savoy cabbage—are deliciously comforting. By comparison, braised mussels with smoked ham hock and pork crackling, or a beefy take on a bo ssam let down by its ho-hum sides, lack the focus of the more nuanced dishes. A deep bench of Ontario beers makes for fun and easy pairing. Chiffon cake with calamansi lime curd and shards of meringue and whipped cream is a perfectly eclectic finish.

At this elegant but unstuffy French restaurant in Bloor West Village, Montreal expat James Petrin (Salt Wine Bar) treats humble ingredients—offal, chicken tails, potatoes—with serious respect. Fried chicken livers, deliciously crunchy, sit in a decadent puddle of creamed leeks; lightly pickled shallots offer a piquant counterpoint. An ultra-creamy crab bisque is fragrant with saffron and thick enough to support a few crab beignets and a swirl of crème fraîche. The kitchen gets playful by introducing flavours from former French colonies including Vietnam, Louisiana, and, as in the roasted lamb shoulder with a minty chickpea ragoût, Morocco. For dessert, there’s a crème brûlée made with absinthe and a poached-pear tarte tatin doused in an addictive mulled wine reduction. The upstairs Fou Bar is a work in progress, but by summer the rooftop patio should be hopping.

The hood needed this.

Decked out in vintage lighting and antique hand tools, the Oakwood Hardware, with its Parkdale-lite vibe, has found early favour from Oakwood Village’s changing demographic. The five-month-old spot is an outlier on a strip dominated by fading pizza chains and take-out joints. Pains have clearly been made to position it as the area’s first hipster haunt, down to its menu of charcuterie boards, tacos and Korean-style fried chicken. Everything is well executed, if slightly lacking in presentation. Fluffy arepas crowned with a black bean chili and soft queso fresco, and crispy, provolone-stuffed arancini paired with a bright tomato sauce both make for great starters. Bone-in braised short ribs come on a bed of belly-warming polenta; they’re dragged down only by a side of uninspired steamed veggies. Former Parts and Labour mixologist Nick Watson crafts well-balanced cocktails behind the bar, and attentive and jovial servers make you feel like you’re dining with friends—even if you’re alone.

With a menu courtesy of James Harrison (F’Amelia, Splendido), another pearl has been added to the ever-growing string of gems on the eastern stretch of Greektown. To start, goujons—fancy French speak for fish fingers—bring strips of fresh Arctic char encased in crispy tempura with sauce gribiche, a delicious tartar sauce enhanced with chopped egg. House-made cavatelli in a light cream sauce with wild mushrooms, madeira wine and parm is perfectly al dente; and wonderfully gamey roasted lamb shoulder is balanced by the sharp flavours of red pepper, zucchini and eggplant. Pastry chef Rebecca Tresham is responsible for the desserts, all of which are worth the extra calories—especially apple bread pudding that’s deep-fried to crunchy perfection, then topped with gelato and caramel.

There is something so deliciously cozy about this BRUNCH photo by @rebecazulch Sticking to my New Years goal (I don't do resolutions) and trying as many local restaurants as I can. The best part about this particular adventure was to have delicious food with an amazing group of girls! I have so much love for them. They're stunning and so inspiring! ?‍♂️?‍♂️?‍♂️#TabuleMiddleEastern #GetInHere #SoukTabule @canarydistrict

The Canary District’s new counter-service outpost of the Tabülè chain isn’t just serving streamlined versions of sit-down food. Everything arrives quickly— on real plates—and no shortcuts are taken. Entrées are priced for one, sized for two: the turmeric-tinged Beirut pulled chicken is exceptionally moist and lean, served over seasoned rice. It’s stiff competition for the punchy beef shawarma or falafel platters. And for those who want a satisfying skillet of roasted tomatoes, peppers and eggs for dinner, there’s all-day shakshuka. A side order of crispy Phoenician fries, blasted with za’atar and showered in tahini, is always a good idea. 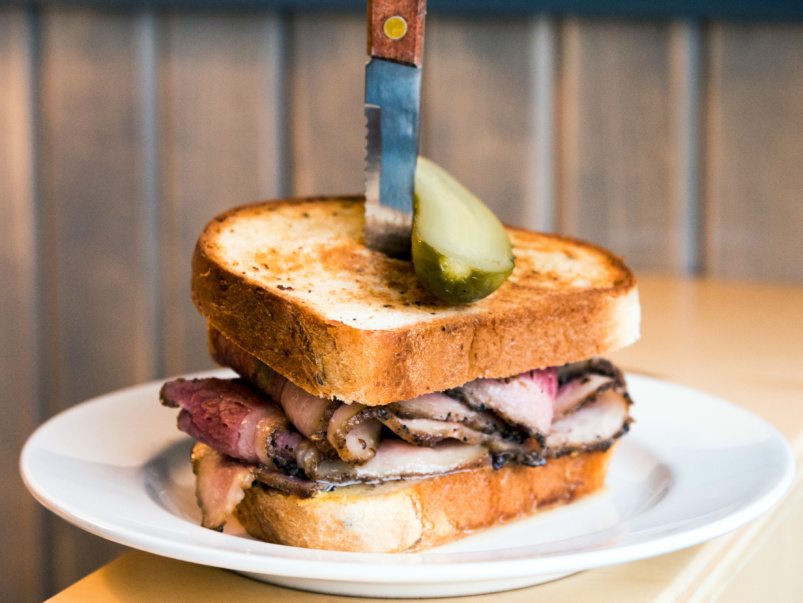 He’s got 20 years and six kitchens under his apron strings, but with his newest venture, chef Ben Denham is keeping it small and simple. The focus is on southern classics done up in surprising ways, and made with is local meats and produce. Golden rosti-like hash browns come topped with malt mayo and green onion, and charred broccoli, dusted with shaved aged ricotta, swims in a naughty-but-nice sausage gravy. Delicately smoked salmon and tuna arrive with greens and a surprisingly well-matched asiago and lemon dip. Of a list of four patty melts, the Reuben stacks house-made rye with (also house-made) sauerkraut, a pink-in-the-middle beef patty, Russian dressing and Swiss cheese. Desserts are all made on the premises, too: butter tarts hide maple- and bourbon-plumped raisins, and perfect yeast doughnuts, including one glazed with chocolate and finished with a sprinkling of Maldon sea salt. Service is super-friendly and diner-fast.