“It was time to come home”: After Banknote Bar was booted from King West by the Ontario Line, owner Louie Cristello looked to Little Italy

“It was time to come home”: After Banknote Bar was booted from King West by the Ontario Line, owner Louie Cristello looked to Little Italy 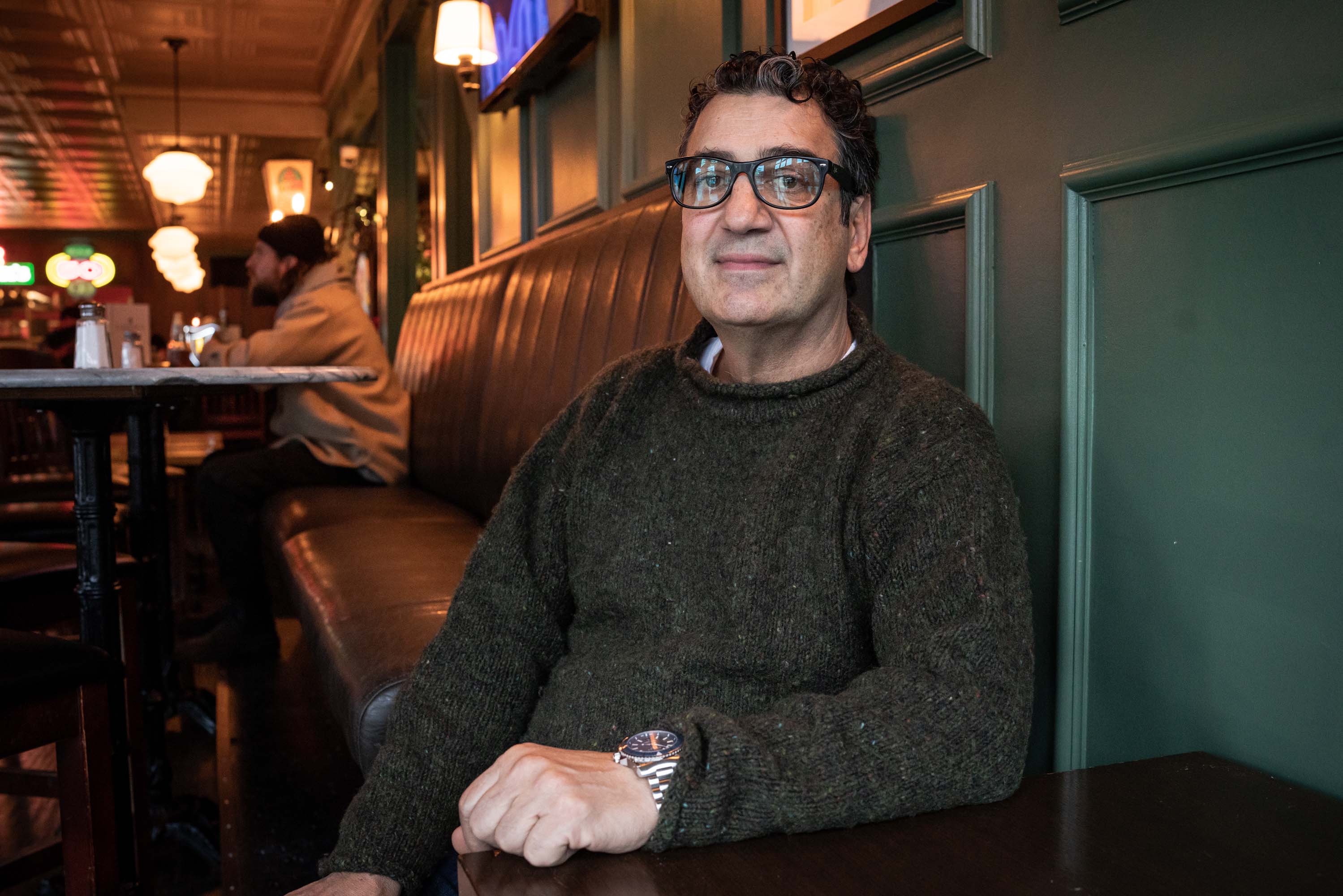 Opening Ladybug Tavern, a new watering hole in Little Italy, is something of a homecoming for Louie Cristello, who has a long, intimate relationship with the neighbourhood—not to mention the city’s bar scene. He spent most of his life in the area, growing up on Concord Avenue and raising his family on Delaware Avenue. Thirty years ago, he got his start in the restaurant industry, opening Brass Taps, just a half-block down the street from where the Ladybug now lives.

“I built that bar with a hammer and nails. I was young and didn’t have very much money,” he says. “It’s nice to see it still standing.”

Over the next few decades, he continued opening restaurants, about 10 in total, including Mayday, the Monarch, Lounge 88, the Brunswick Avenue Pump, Southside Louie’s and Banknote. Time passed. The bars opened and closed, some for good.

In 2022, Cristello owned both of the Banknote locations—one in Corktown, the other on King West. Then came Metrolinx, buying up a bunch of buildings downtown to make way for the 15.6-kilometre-long Ontario Line. The Banknote on King West got caught in the crosshairs, a casualty of infrastructural progress.

Suddenly, Cristello was on the lookout for another project, something to do as he approached retirement. That’s when he saw a for lease sign on the property at 890 College Street, just a short walk from his house. 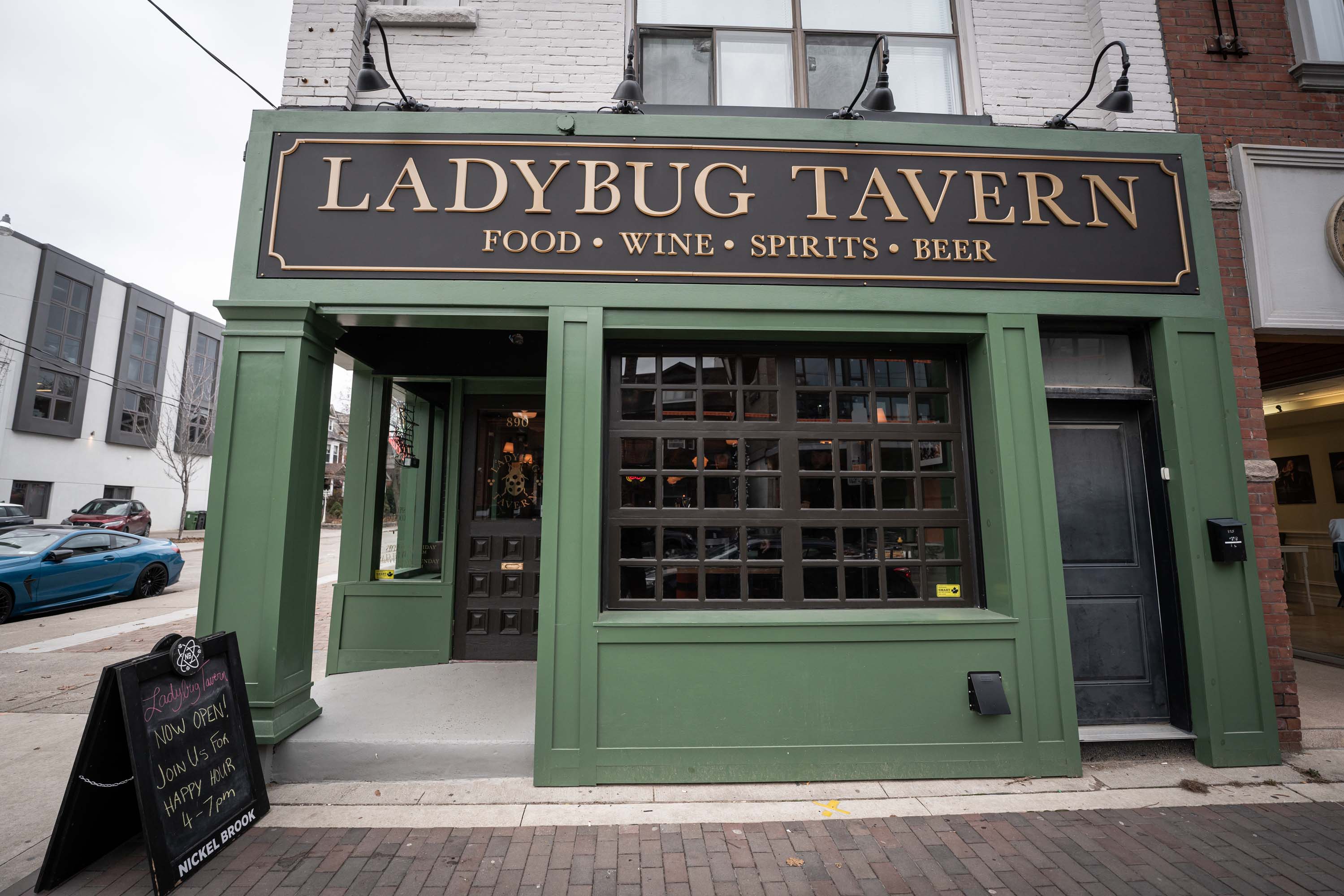 It was a familiar spot. For a long time, he watched as that address took on several different identities—Mitzi’s on College, Red Fish, the Huntsman Tavern, Alchemy—all of which seemed to open and close in relatively short succession. “People think the building is cursed,” he says. “If only the walls could talk.”

He saw the potential for a low-key pub, something old school, a place where people could sit and talk over a pint or three. After some savvy negotiating, Cristello snatched up the lease last July. “I’ve been part of this neighbourhood for 60 years,” he says. “It was time to come home.” 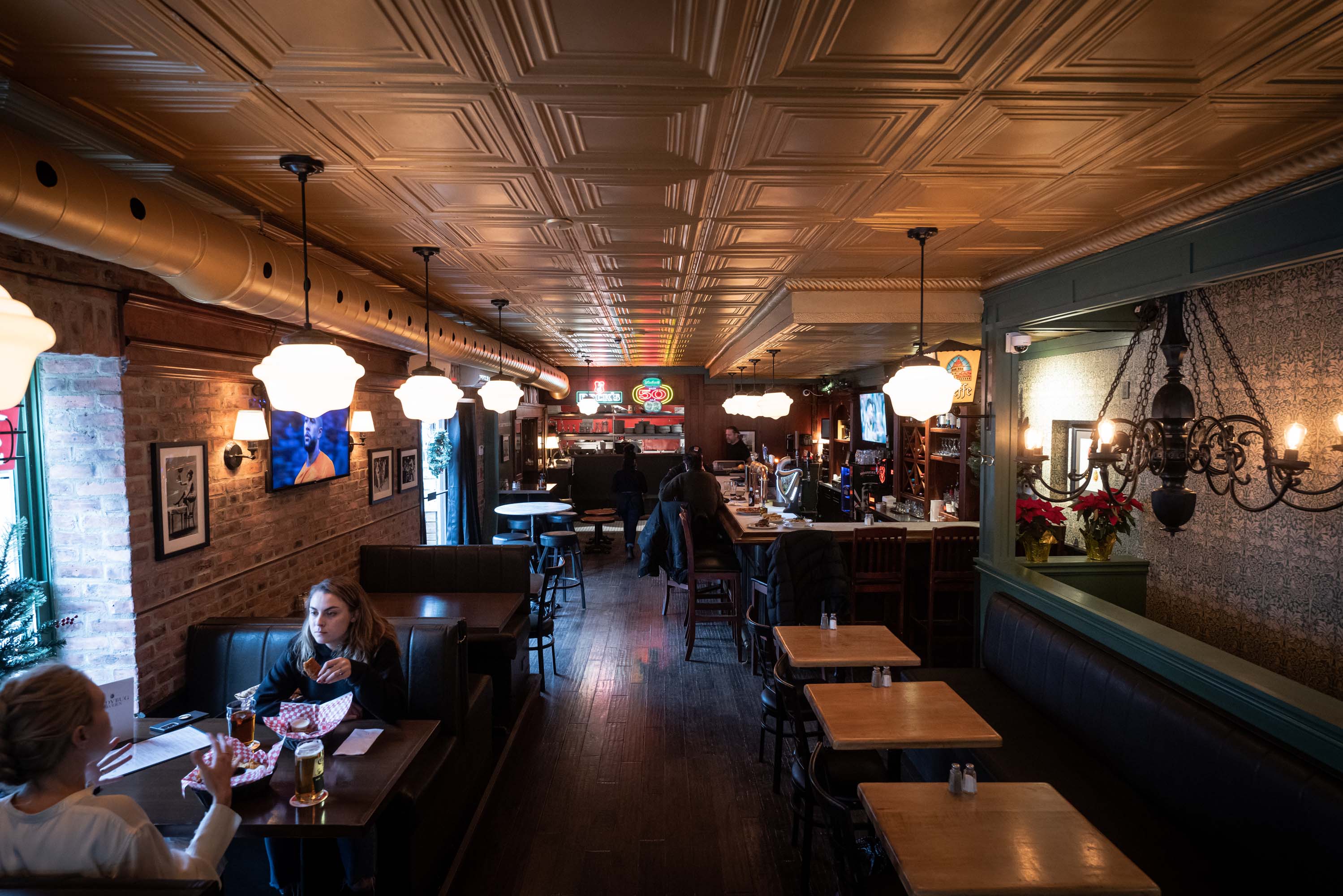 But, before he could open up shop, the space needed some love. There were a few leaks and issues with the sewage system. The decor needed a bit of a refresh. So, over the next four months, Cristello got to work, doing the renovation himself—everything from the carpentry to the drywall.

Cristello learned woodworking during his time at Dewson Street Public School, back in the 1970s. He also picked up a bunch of skills from his father, Salvatore, who worked as a tradesman for the city. “At 13 years old, when I wanted to go play hockey with my friends, my dad would say, ‘No, you’re coming to work with me.’” 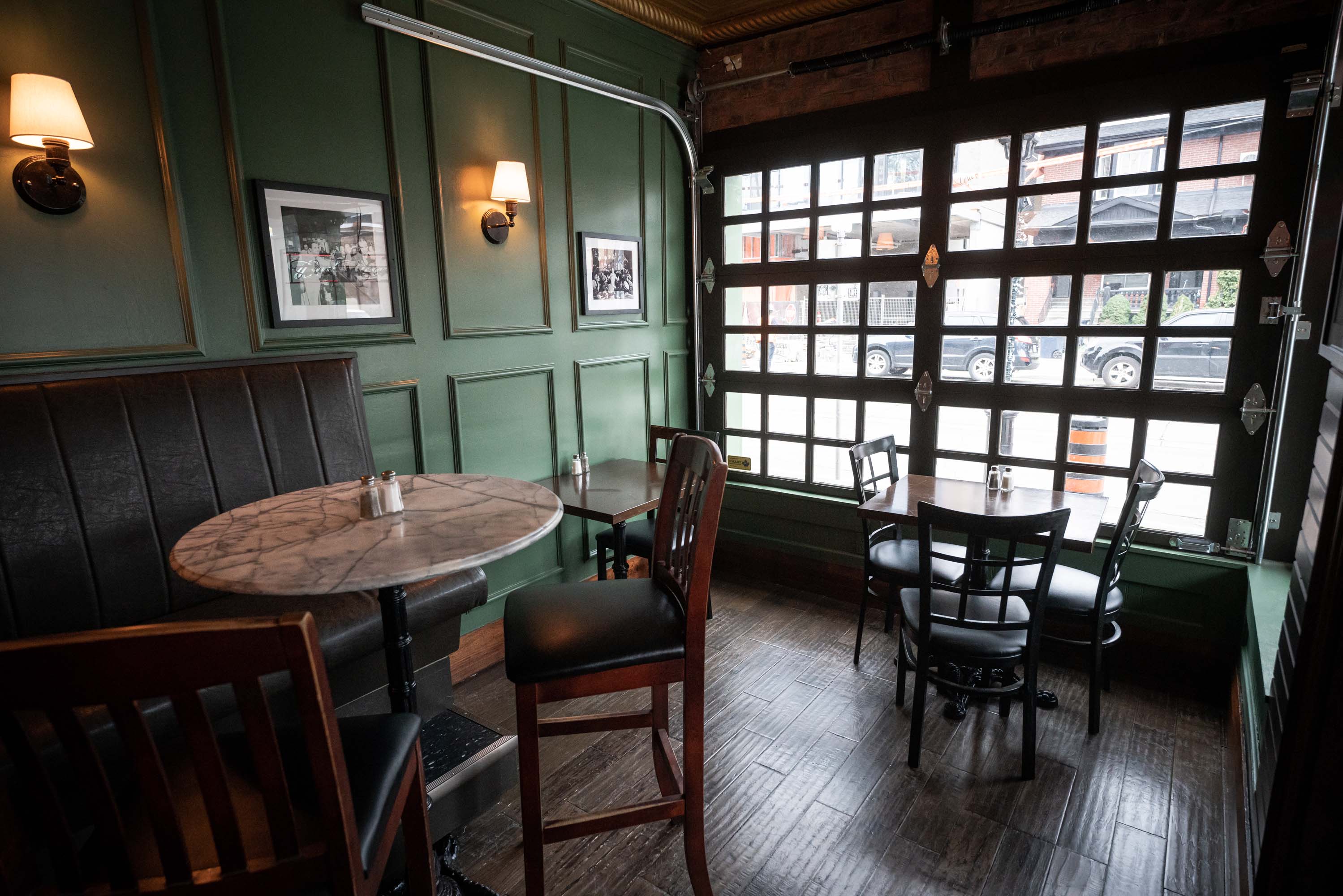 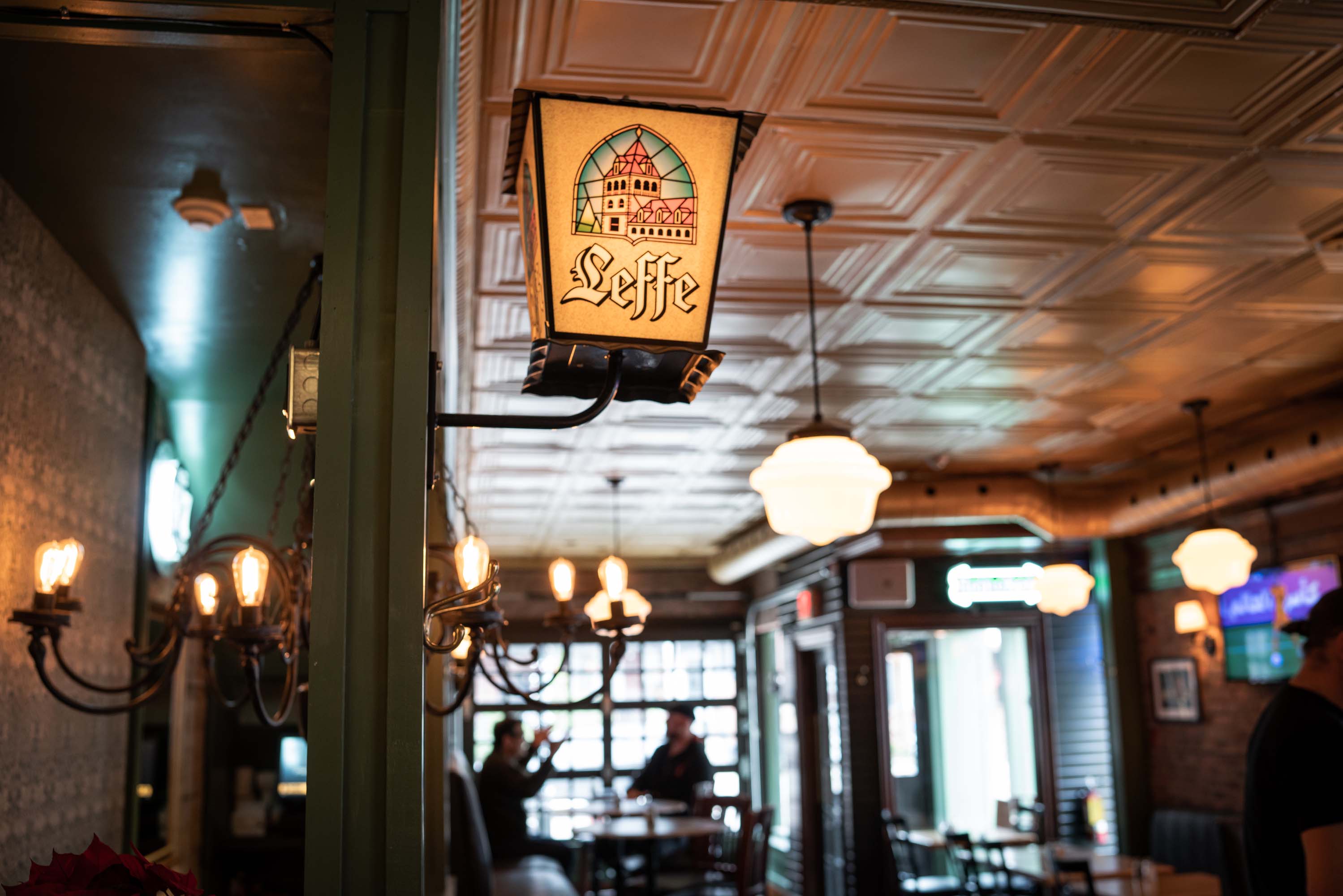 Cristello gave Ladybug Tavern a green colour scheme, an ode to taverns of the early 20th century. He decorated the walls with old black-and-white photos depicting scenes from that era. He added warm woodwork and put up a bunch of neon signs collected during his time in the industry. And he installed an abundance of big-screen televisions, perfect for watching all things sports.

“I’ve always been attracted to pubs. I like the comfort food, the drink, the atmosphere,” says Cristello. “It should feel like a room in an old house. When you come in here, it’s warm and cozy, especially during the winter.”

The food at Ladybug is deeply personal for Cristello. He comes up with the menu; he creates the recipes. Traditional comfort foods—burgers, wings, poutine—are featured prominently. Cristello is Italian, so of course pizza, pasta and calamari are on offer. And his wife, Patty, is Greek—so naturally lamb skewers made the cut.

From top to bottom, the menu reads sort of like a family memoir. “Anything that happens in my life, I pay homage to it with the restaurant,” says Cristello, who also draws inspiration from his daughters, Stephanie and Samantha, and his late father-in-law.

Cristello’s take on a Chicago dog was inspired by visits to see his daughter Stephanie, who works as an art curator in the Windy City. The ribs are an homage to Patty’s late father, George, a unionized restaurant bartender and waiter who worked at the Morrissey Tavern, on Yonge Street at Davenport.

Cristello chose the name Ladybug Tavern because of Stephanie. One day, while on a stroll through the neighbourhood, as they ambled past 890 College Street, Stephanie found a ladybug on her father’s shoulder. It likely fell from one of the trees lining Delaware Avenue. She plucked it off and made a wish, saying that she had the perfect name for the restaurant. Cristello suddenly noticed ladybugs dotting the exterior of the building renovations. To top it off, LB were the initials of Cristello’s late brother, Lario Bruno.

“What do you call that?” says Cristello. “Serendipity.” 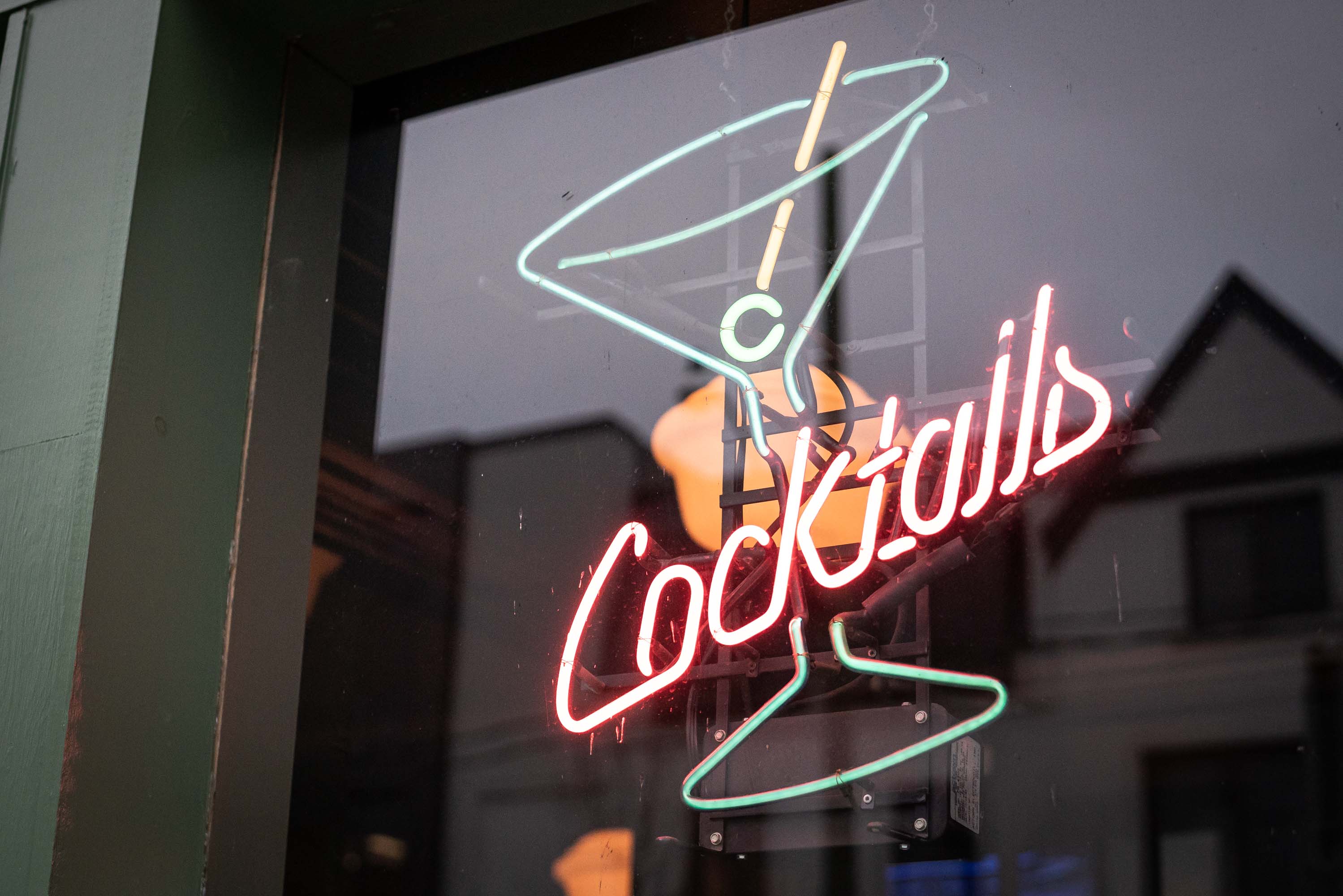