When he was in his 20s, Eric Brass never thought much about tequila before 1 a.m., and even then it was always a bad late-night decision quickly masked by lime. That all changed in 2005, when the former asset manager went to Mexico for a work-related trip. There, he was introduced to good tequila, and instantly fell in love with the stuff. The next year (much to his mother’s dismay) Eric decided it was time to ditch finance. Instead of making spreadsheets, he wanted to produce and distribute a premium tequila—something that was hard to come by in the LCBO at the time. 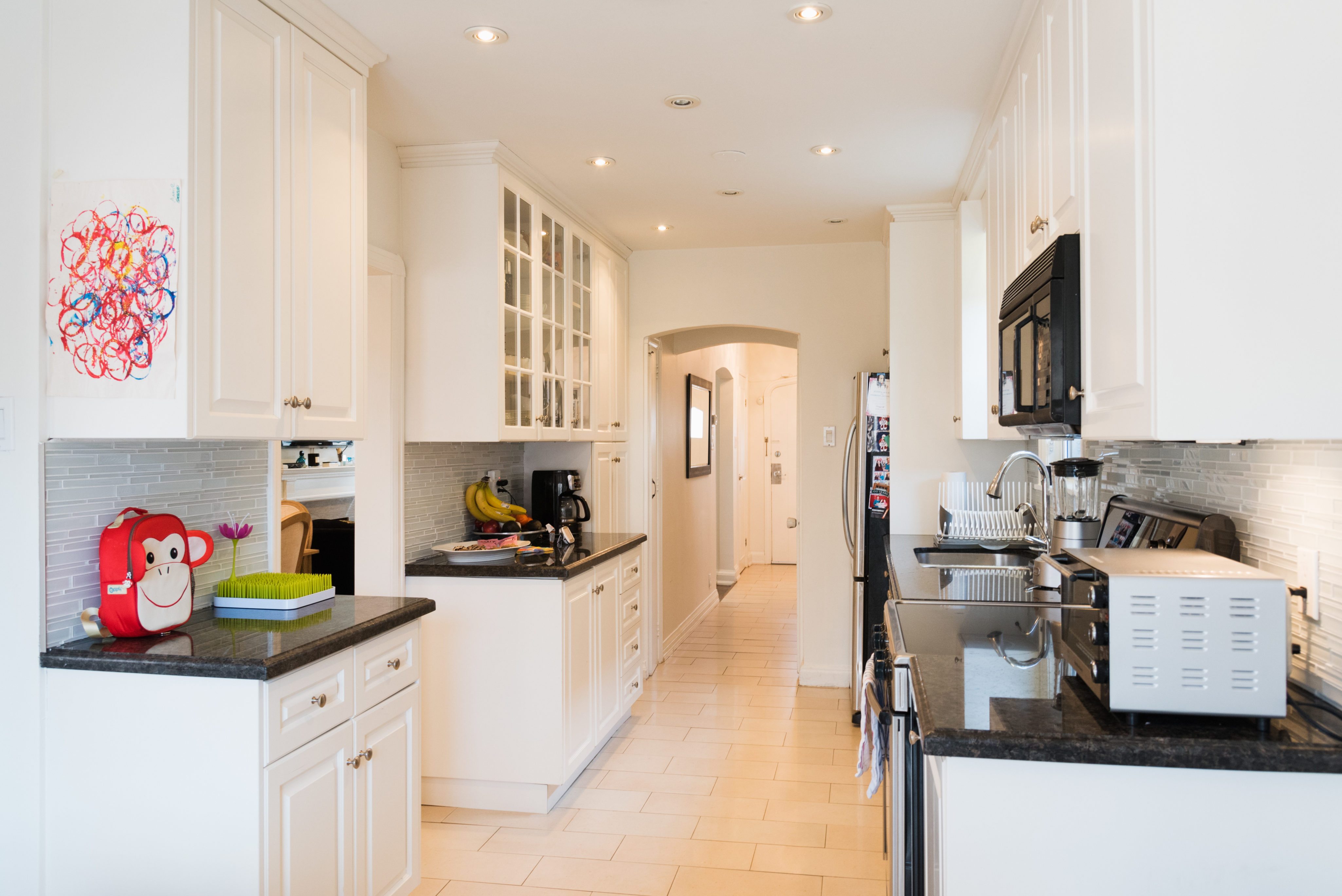 It would be another six years before Tromba was profitable enough for Eric to make it his full-time gig. Until then, he would go straight from the office to Toronto bars, where he’d proselytize the virtues of his tequila to any bartender or bar owner who would listen. The gamble paid off: Tromba’s now the most popular premium tequila in Ontario bars and restaurants—and it’s pushing into international markets, too. We caught up with Eric after Tromba’s Miami launch. His wife, Rebecca, two-year-old daughter, Annie, and six-month-old son, Reece, weren’t too upset about having to spend winter in Florida, but it meant that their kitchen was a bit more bare than usual when we visited. 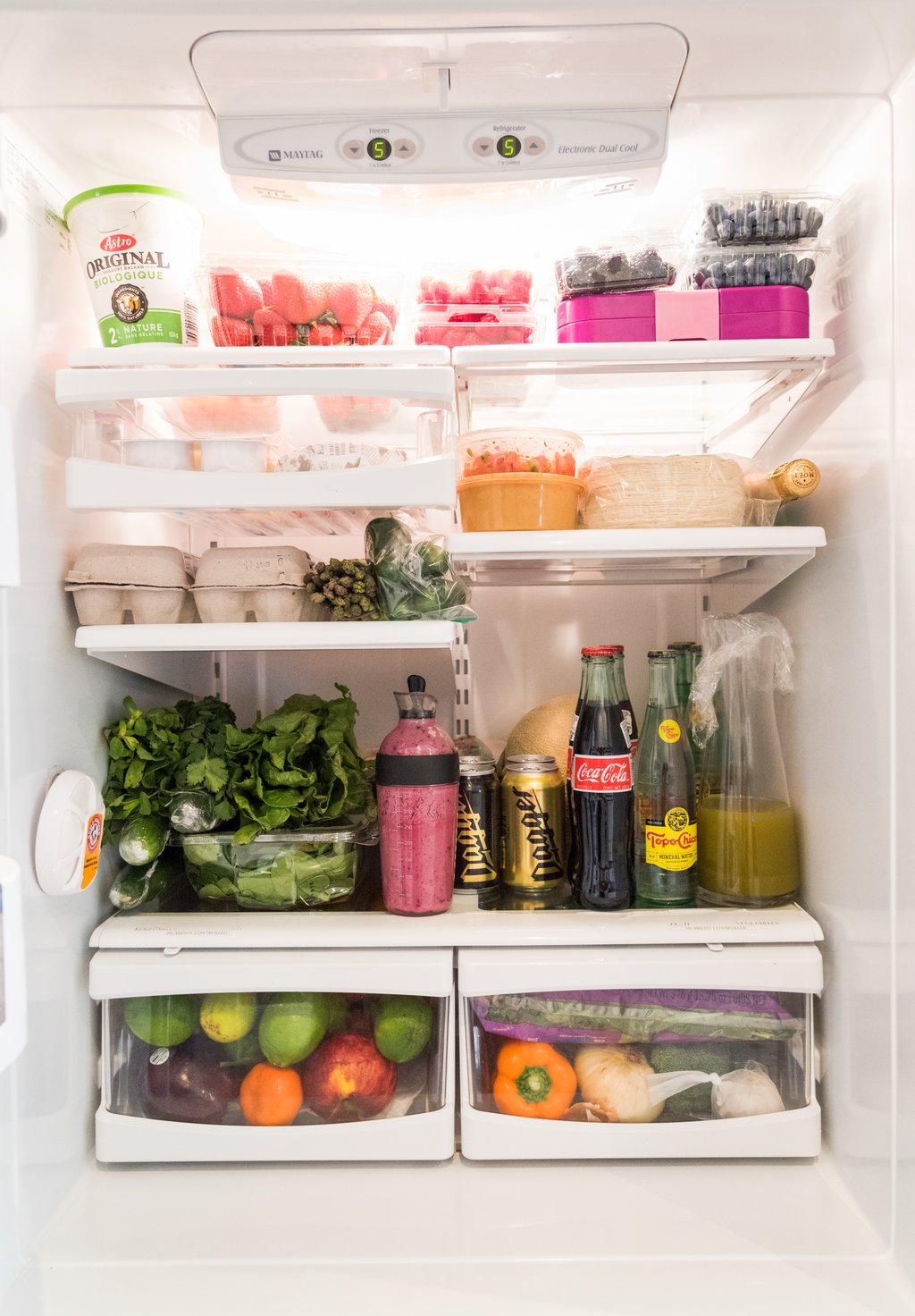 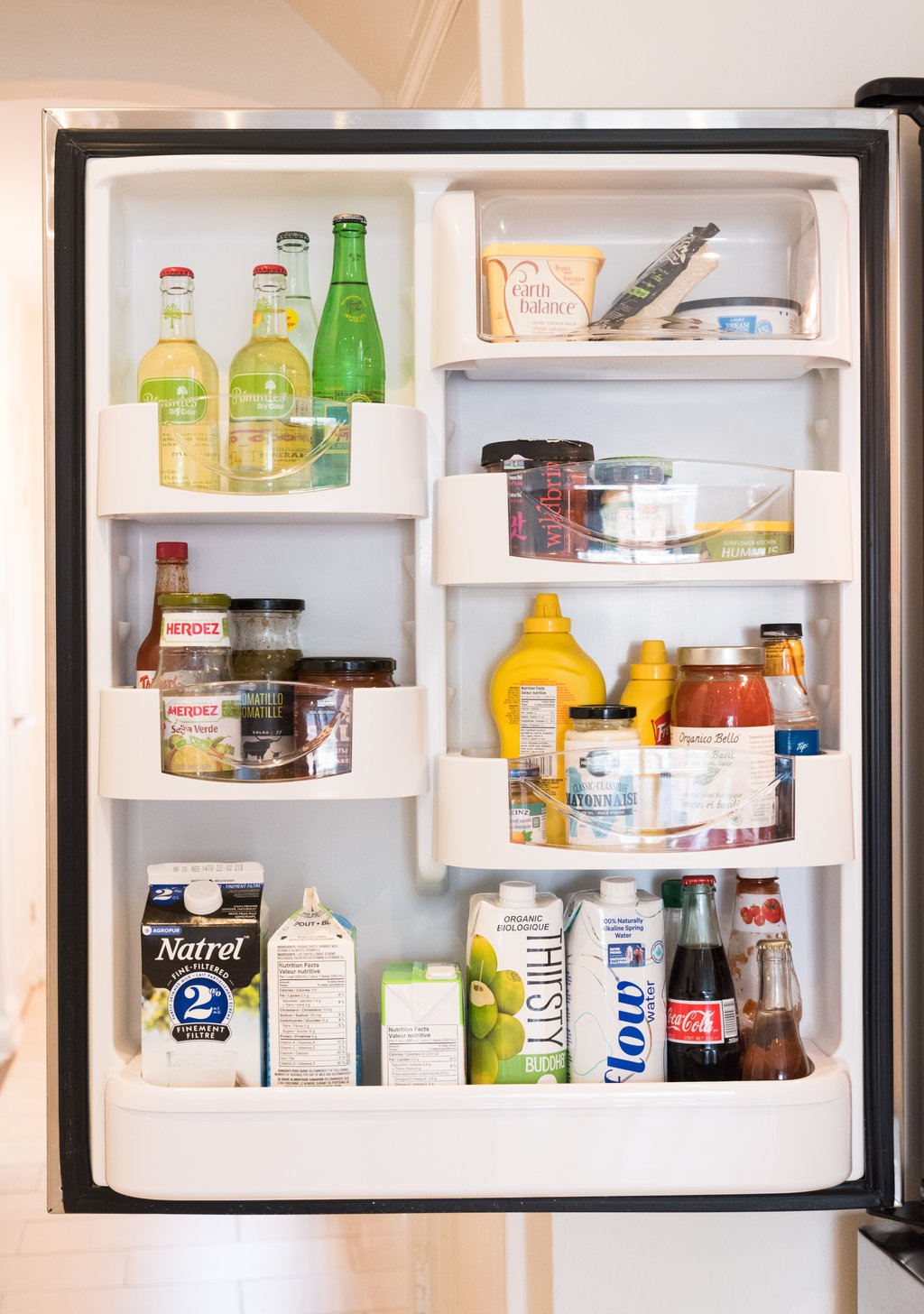 The couple moved into their 1940s Cedarvale home just after Annie was born. Rebecca loves how bright the kitchen is, but she spends most of her time running after little ones, not cooking. “Right now, anything I cook needs to be ready in 20 minutes or less,” says Rebecca, who tries to cook mostly vegetarian and use local ingredients when possible.

The booze industry means many late-night commitments, so Eric can’t always be home for dinner. He does, however, make an effort to enjoy family breakfasts. The Brass fam easily crushes half a dozen eggs daily. If the eggs aren’t scrambled, they’re used for challah French toast (Rebecca’s specialty). When it comes to lunch, Eric typically grabs takeout near his office, which is in the WeWork building on Adelaide. He tries to keep things healthy-ish. He used to visit Soho House regularly for its salad bar. These days, though, he’s more likely to be found at Assembly Chef’s Hall, grabbing a sandwich from Cherry Street Bar-B-Que, or chirashi sushi bowls at Shari.

There’s not much in this freezer—Rebecca prefers to only shop for what she’ll use that week. There’s some Sweet Jesus ice cream and emergency bread. Eric prefers to grab fresh bread from Bagel Brigade: 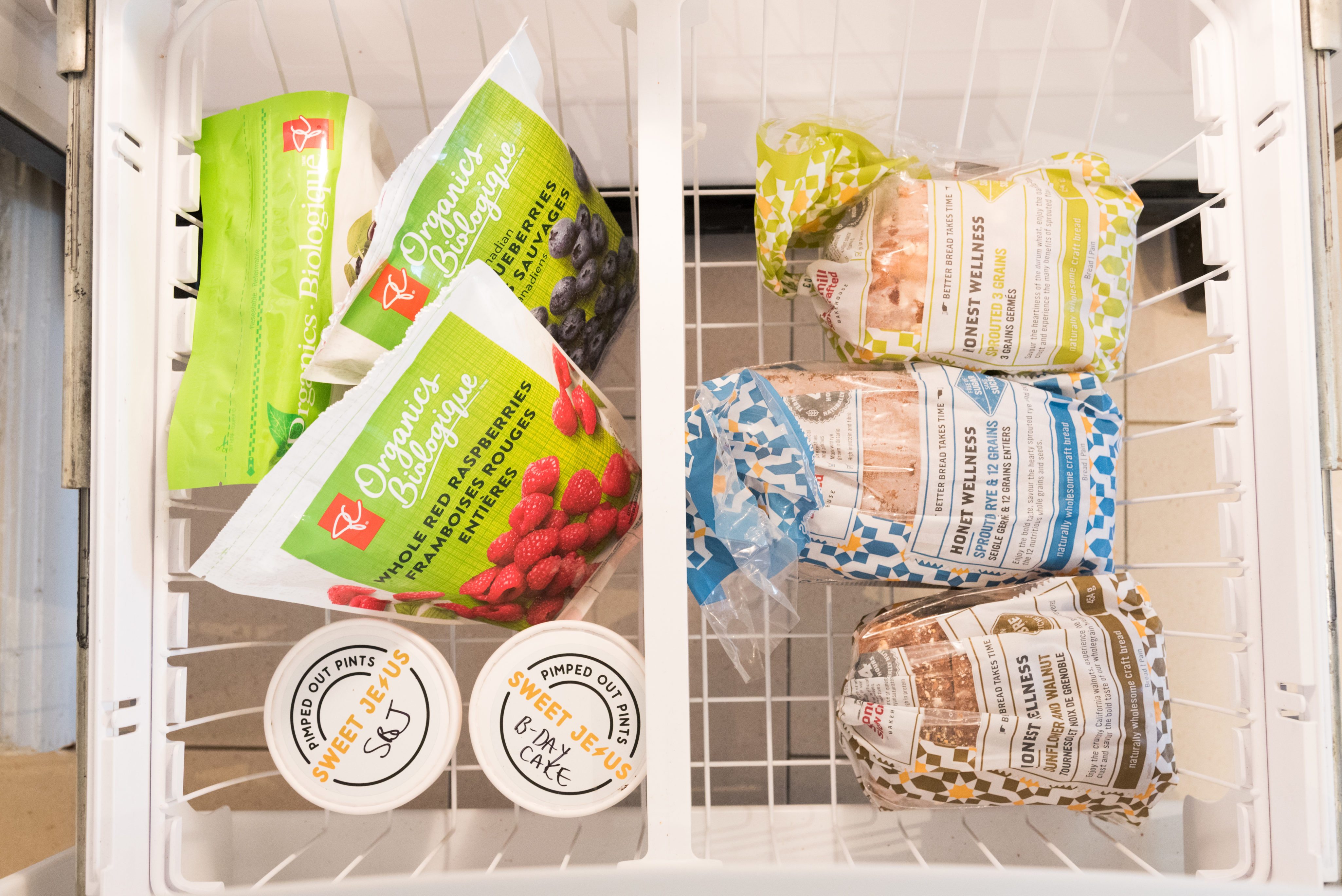 Eric and Rebecca went out far more frequently before they had kids, but they still try and grab a night out when they can. Eric is a fan of all the Playa Cabanas, but if they’re just going out for a cocktail, his favourite spots are El Rey, Cold Tea and Civil Liberties. “I hate snobby places,” he says, before doubling down on how much he dislikes people who try to make spirits esoteric. For Eric, cocktails—and the bars that serve them—should be fun. 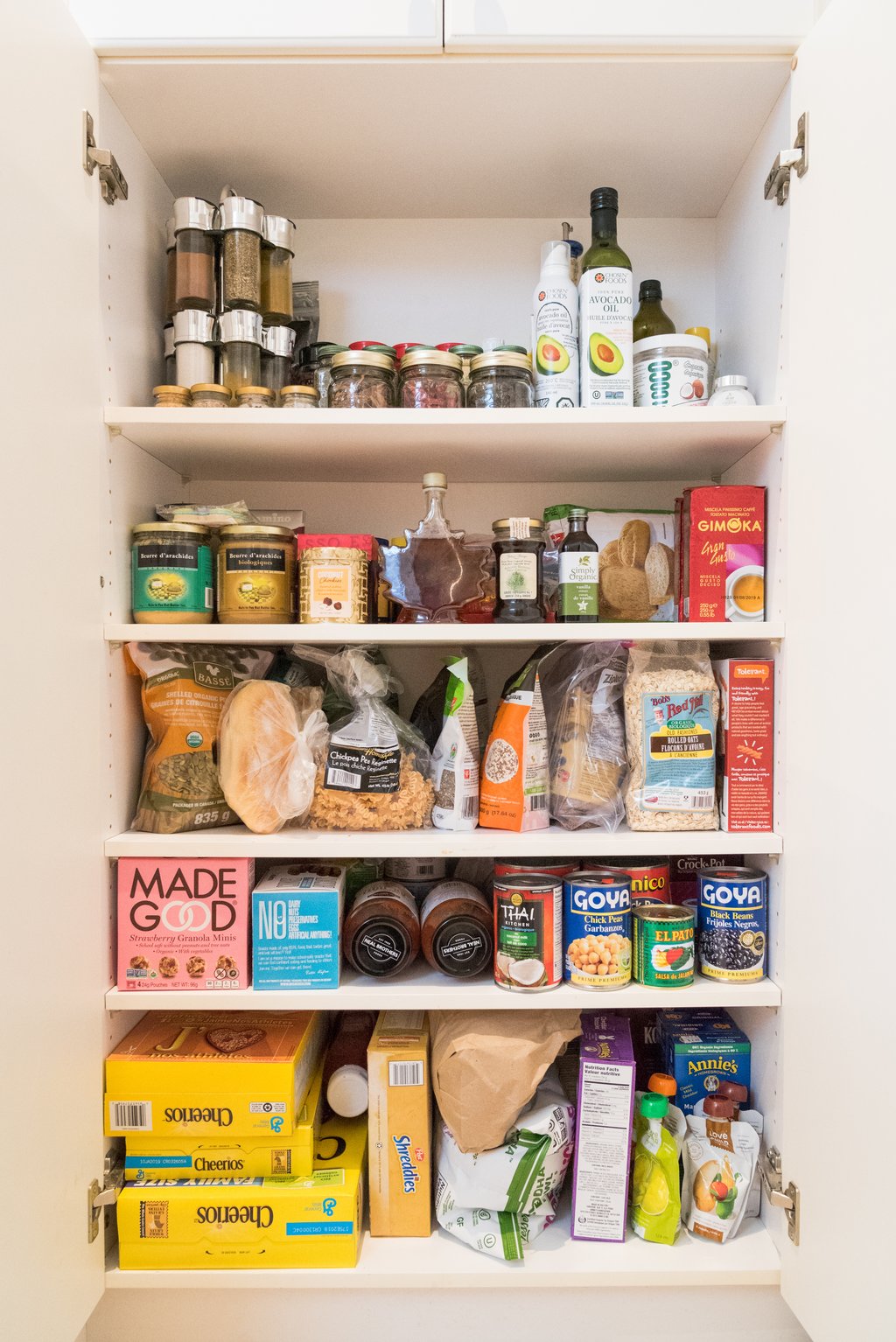 “Liquor is an important part of our lives,” says Eric, who turned what used to be a bookshelf into a liquor cabinet. It’s the first thing you see when you walk into the house: 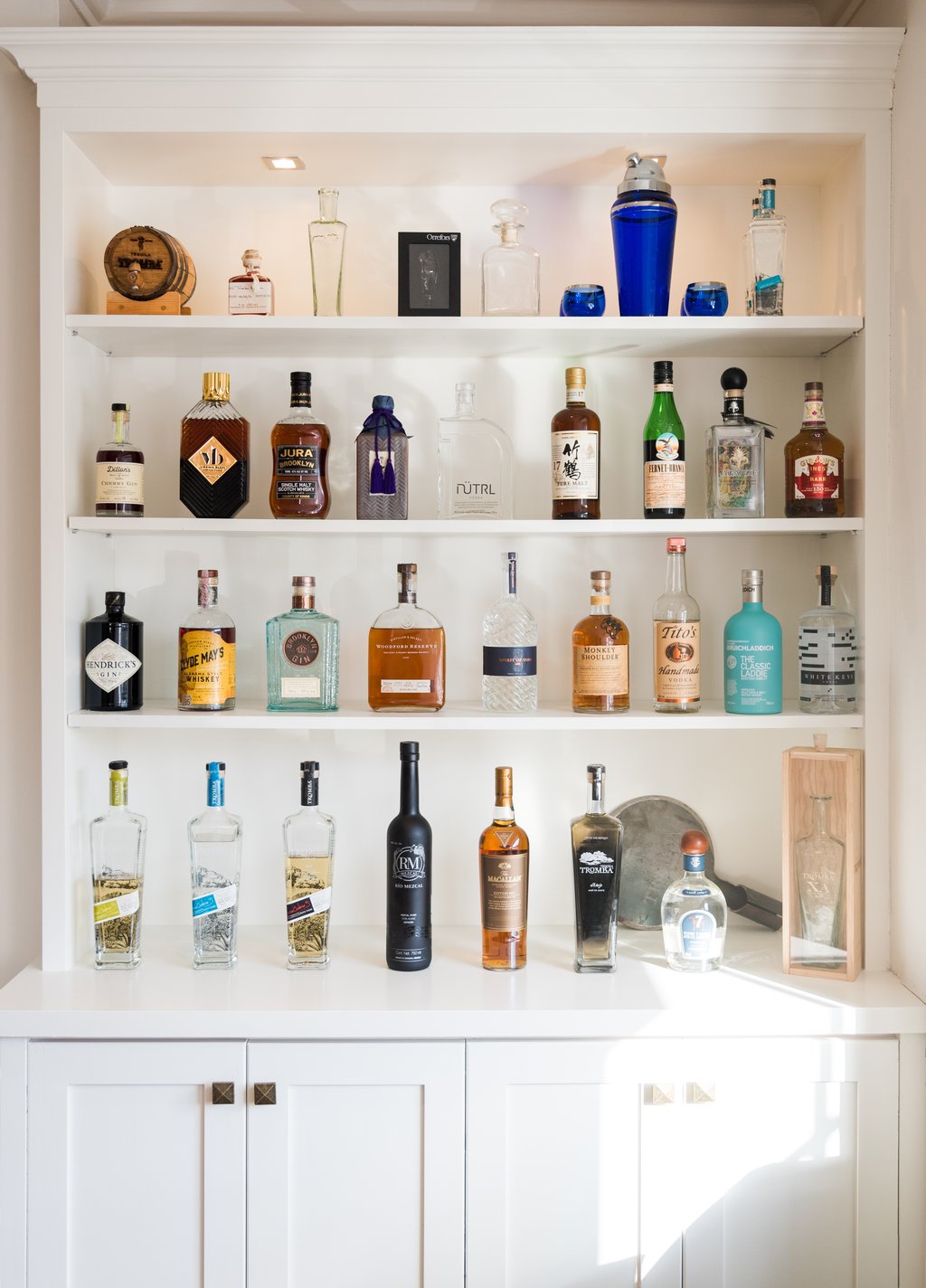 When Eric and Rebecca entertain, they always make a custom cocktail for the party. For their next gathering, they’re planning to make margaritas with Mandarine Napoléon, Tromba, agave, Bittered Sling grapefruit-hop bitters and fresh lime juice. Here’s their stocked bar cart: 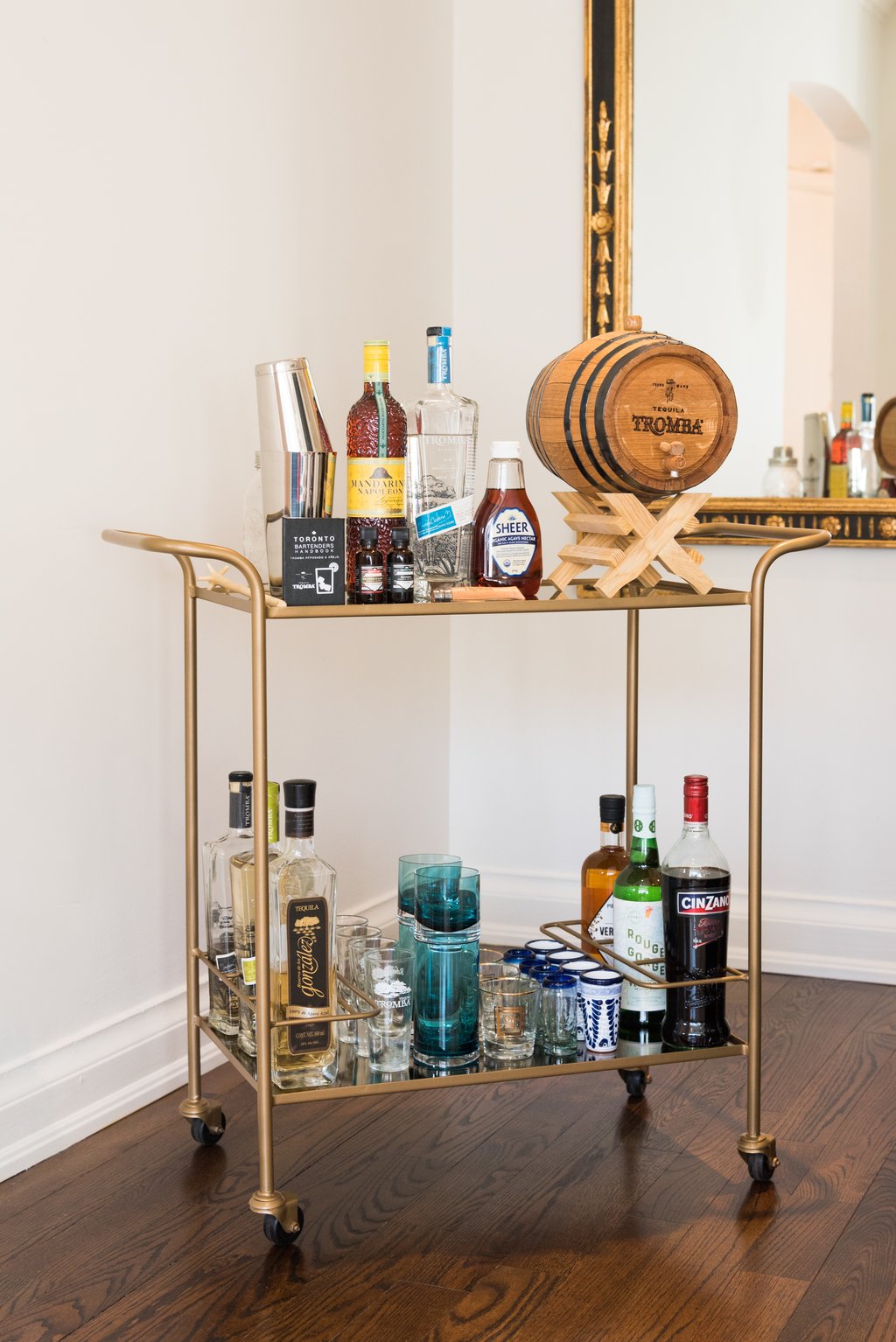 Even their cupboards are full of alcohol-related memorabilia (and more alcohol): 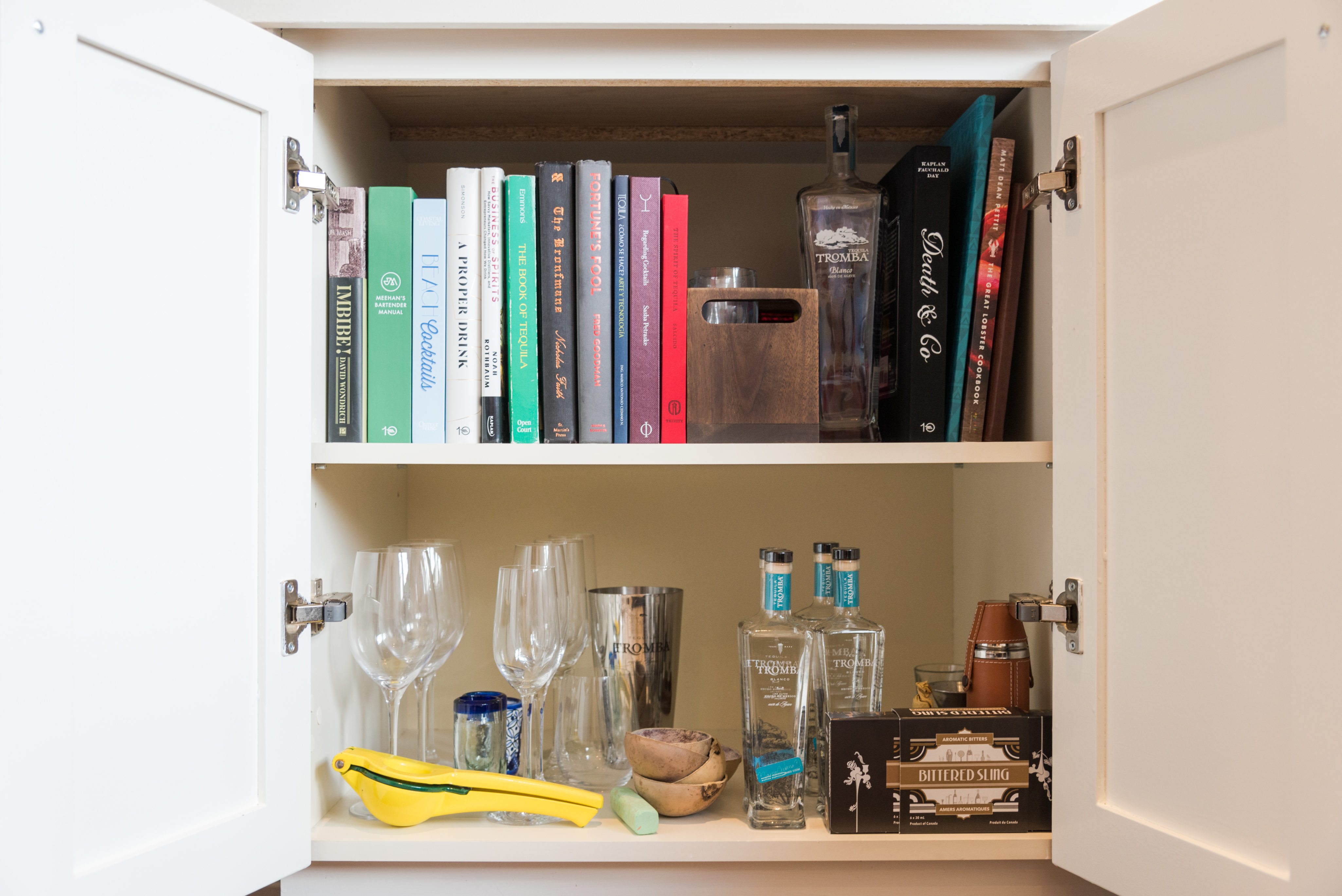 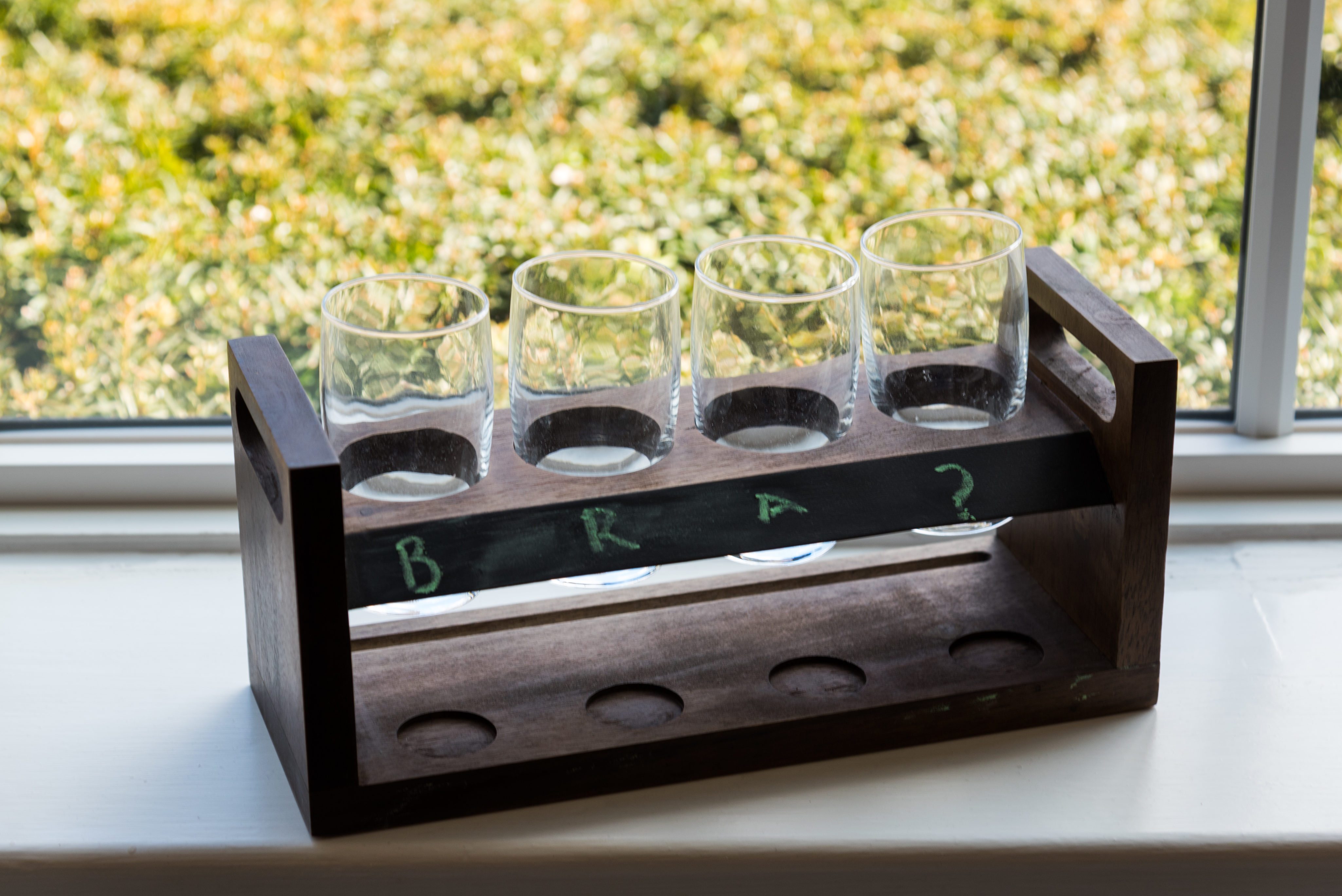 And here are some of Eric’s favourite books on booze: 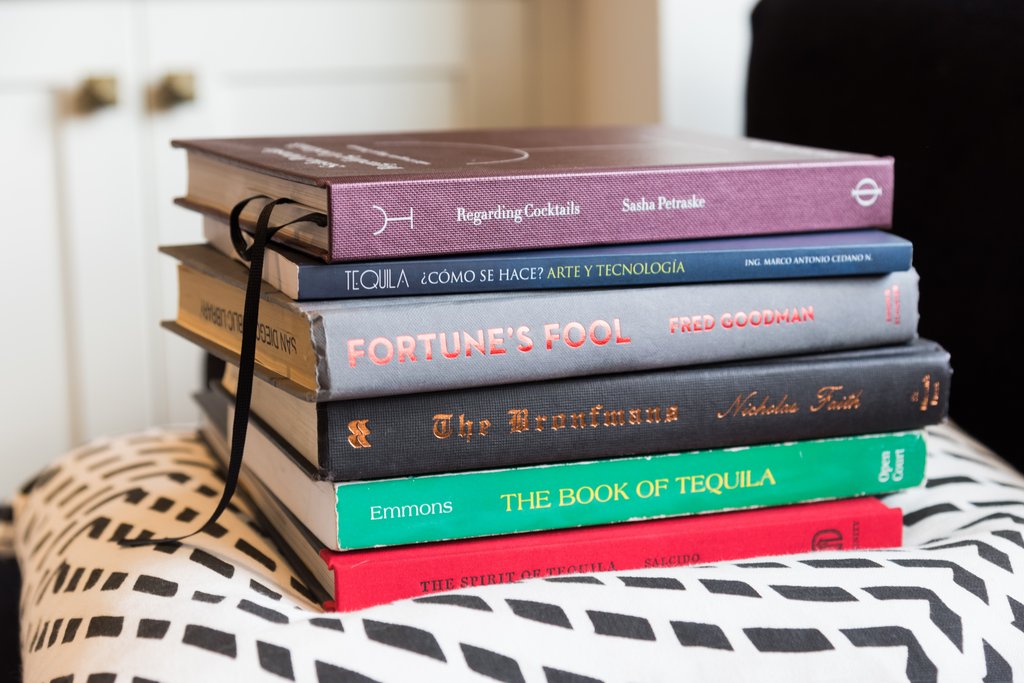 This wine was made by Eric’s great grandfather. (It tastes more like a vermouth than a wine at this point.) The 100-year-old bottle was opened to celebrate Reece’s birth, and the plan is to give the rest to Reece one day, almost 19 years down the road: 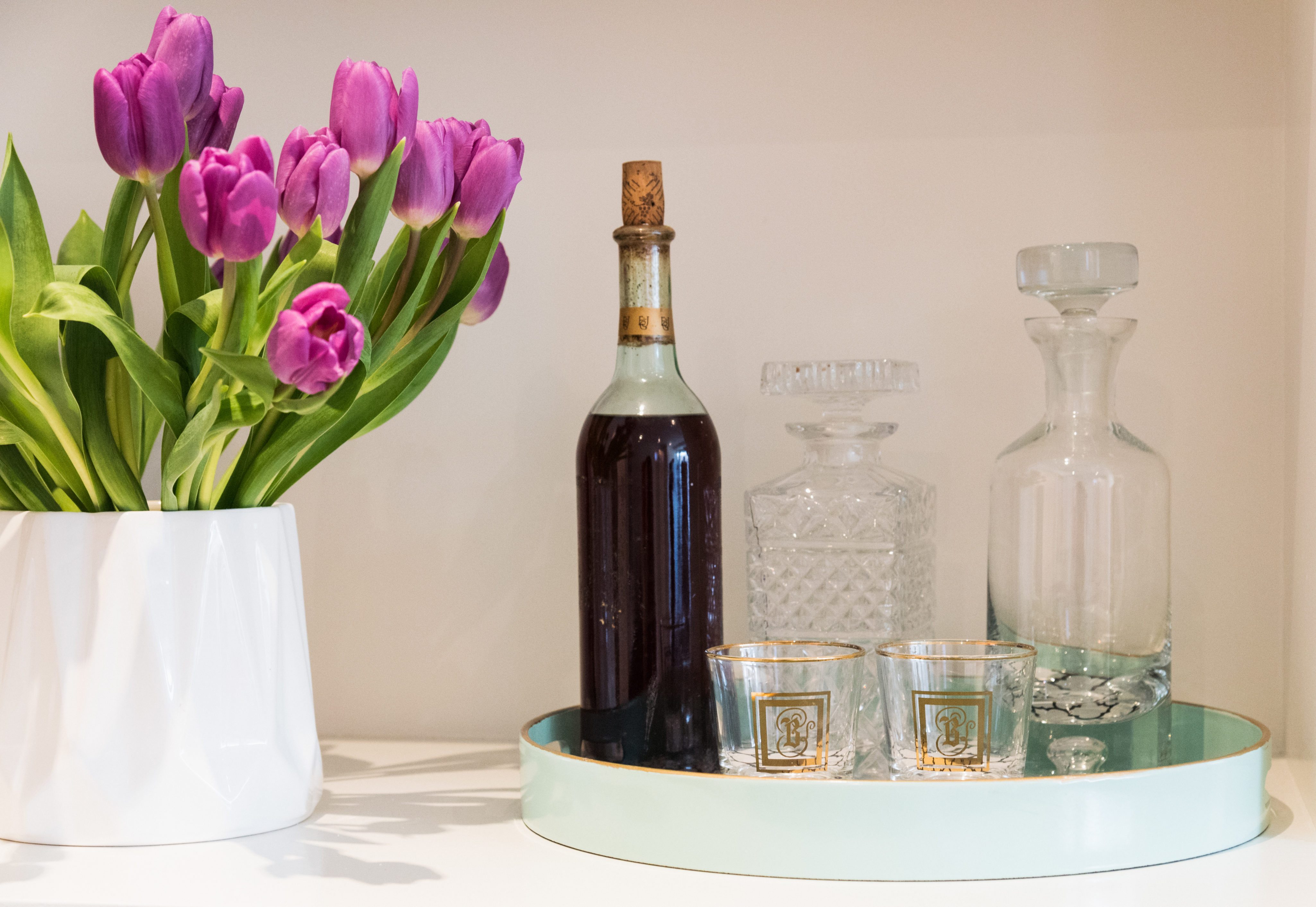 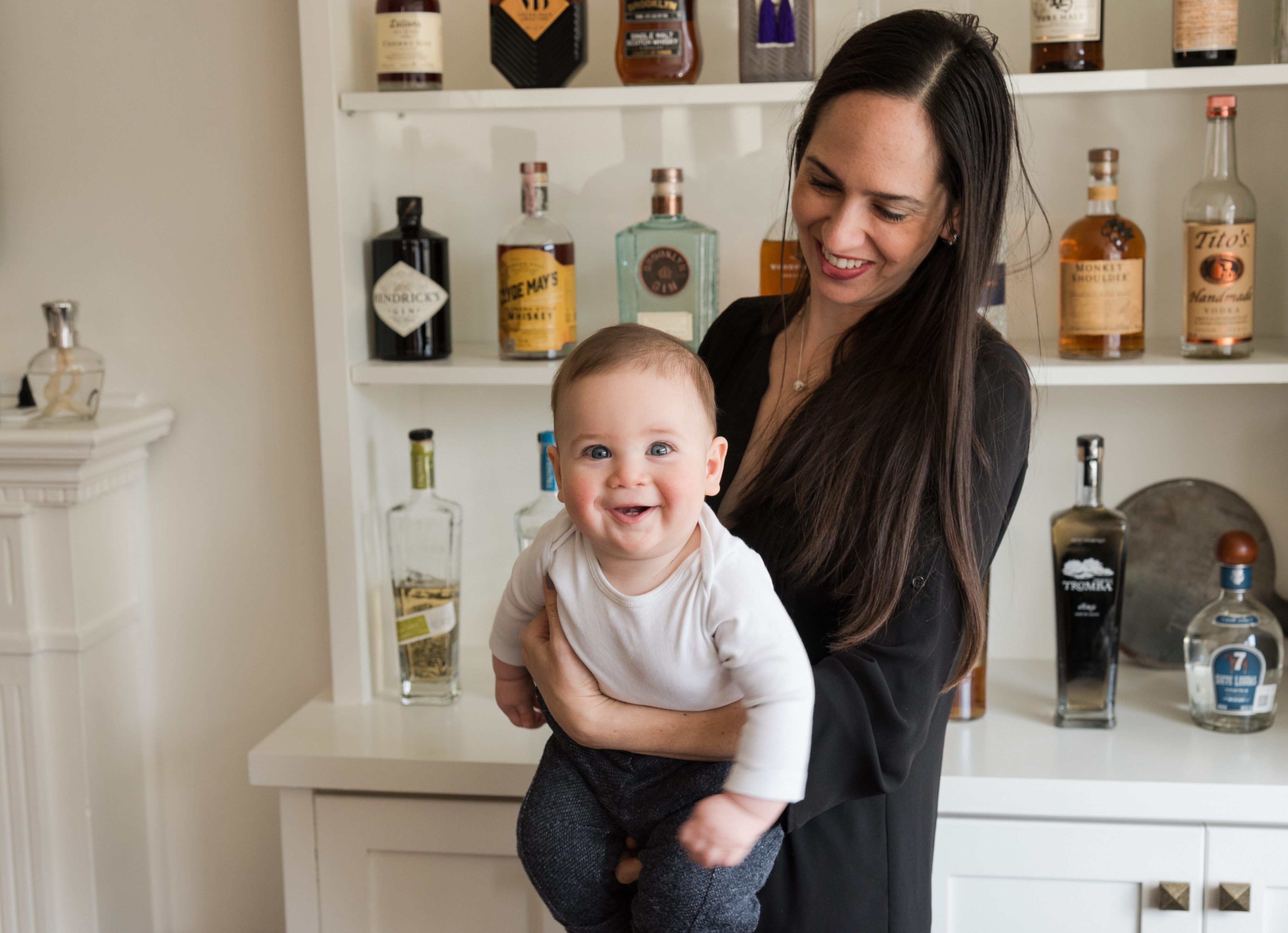 Thanks for having us, Brass family: 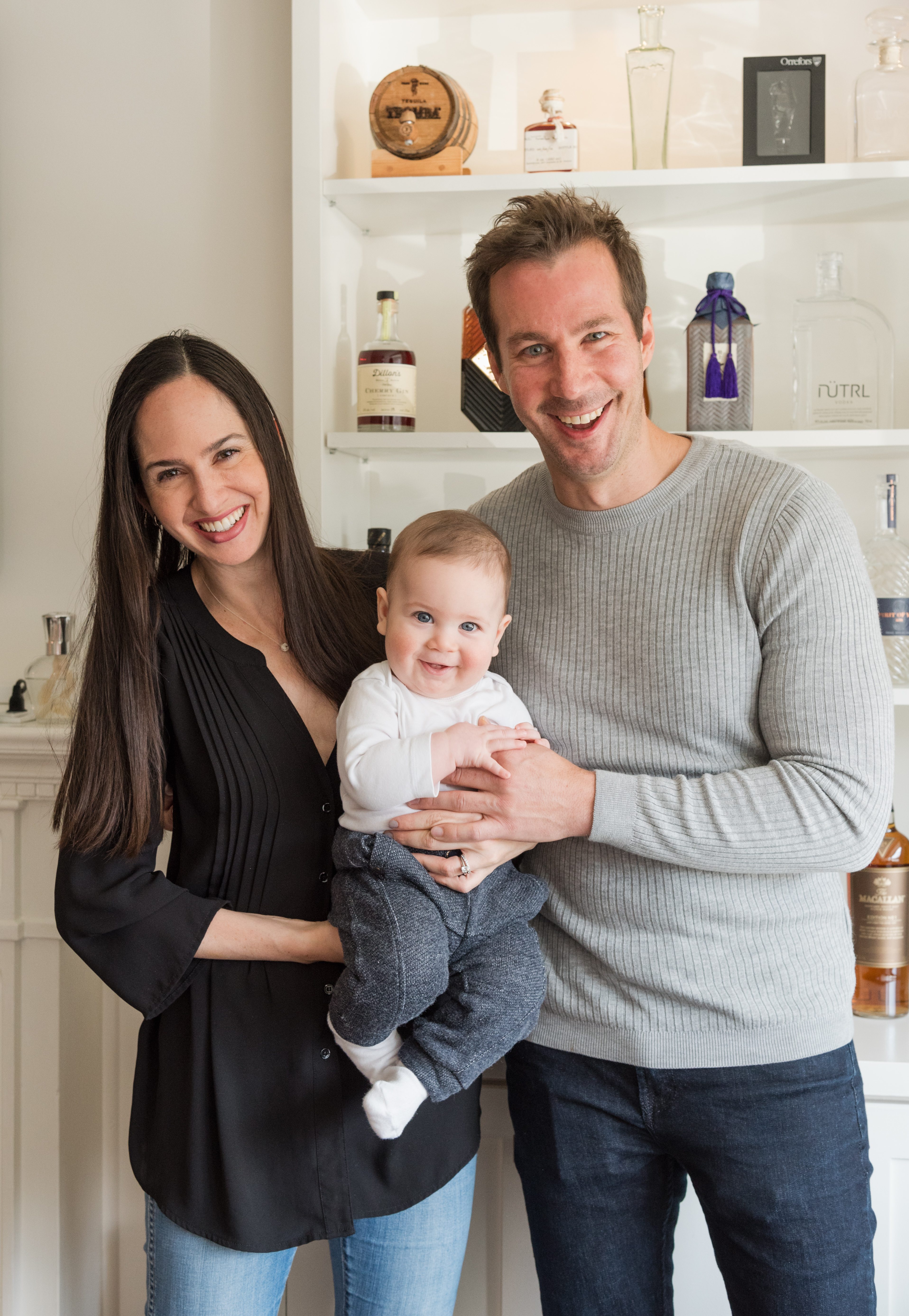