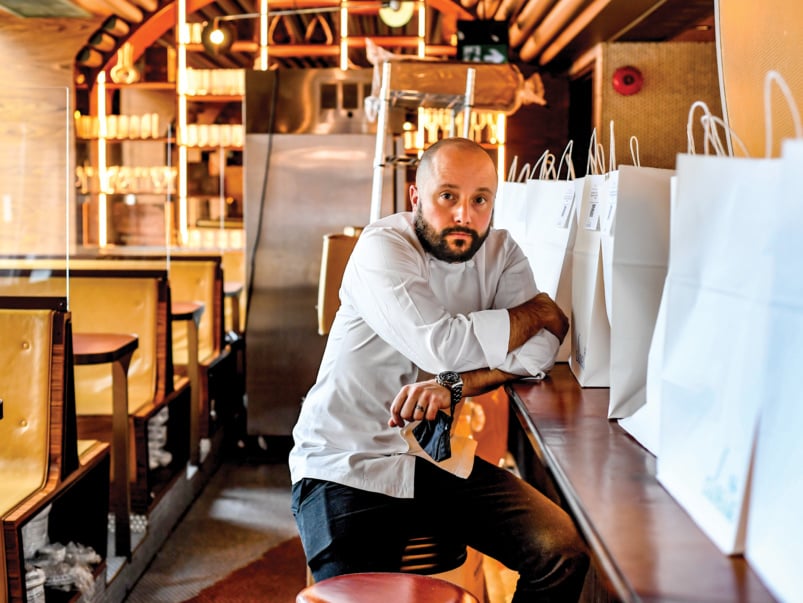 Nicki Laborie, owner of Bar Reyna and Reyna on King, had mixed feelings when the province allowed outdoor dining to resume on March 20—with Covid cases on the rise and another set of restrictions seemingly inevitable. After spending $40,000 to re-staff and get Bar Reyna’s patio back into shape, Laborie opened her doors on March 31, one day before outdoor dining was kiboshed yet again on—yes—April Fool’s Day. Here, Laborie explains how the whiplash of opening and closing comes at a high cost, why restaurants can’t just get ready overnight and what it feels like to flush thousands of dollars down the drain. (Doug Ford may want to expect a bill for sea bass.)

In January, I started thinking about how we would reopen when the weather warmed up. After the mad scramble we went through after the first lockdown—making a slapdash menu from whatever we had left, throwing staff out onto the floor before training them—I wanted to have some time to make decisions. After being basically closed for six months, it’s not like my staff were just sitting around waiting to come back. My head bartender lives in Mexico now. People have moved on. I had to do a second round of layoffs last fall, but I kept my HR director on so that we could get started on re-staffing early this time around. There were rumblings about when the government would allow restaurant patios to reopen and the weather forecast was promising. I wanted to be ready for April 1 which, looking back, I can see how that’s a little funny. April Fools! The joke’s on the restaurant industry. It would be funny if it wasn’t so depressing.

In early March, I went inside my Yorkville restaurant for the first time since we shut down in November. After all those months, I was expecting a certain amount of wear and tear, but even then it was a rude awakening: the gas lines had ruptured, the ice machine needed to be replaced, the HVAC system was down. And the patio looked like something out of a post-apocalyptic movie. The paint was all chipped, the furniture was coming apart, the stones had all been pushed up out of the ground. It was just one expense after another.

I had to bring in contractors, but I couldn’t get my regular crew because they were busy working on other restaurants in the same situation. That work alone cost around $15,000. I spent another $6,000 on plexiglas dividers to go between patio tables, a couple thousand on masks and hand sanitizer. Every single one of those hand sanitizer stands is $800. My Amazon bills are absolutely insane.

By mid March, I had brought in 14 full-time staffers, many of whom were new and had to be trained. We spent four entire days just cleaning—and Bar Reyna is not a big restaurant. I hired a new executive chef, Stefan Skeene, who developed some new menu items. It was March 17 when John Tory said that restaurants would probably be able to reopen for outdoor dining in a few weeks. I remember feeling so happy that we were exactly where we should be and everything is going to be okay. Ha!

Two days later, the provincial government said that Toronto restaurants could reopen their patios, they gave us less than 24 hours notice, which is unbelievably inconsiderate. Like we can just turn a key and—poof! I told my staff not to worry, that we’ve made it this far, so we’re not going to rush. We took the time we needed and reopened on March 31. The weather was beautiful, all of our regulars were back, and for a second it really felt like a return to what I have missed so much. Like literally, a second. The very next day we learned that we would be going back into lockdown. It was brutal. In all, I spent $40,000 to get the place up and running—and a good chunk of that went directly down the toilet. And it was so traumatizing for my staff. I had two people crying in my arms last Friday. I wish I could do more. I told all my staff to have a glass of champagne before we closed up shop—again!—on April 3.

I’m not anti-lockdown. I just feel like if that’s what needs to happen then it should be across the board. Let’s really kill this thing. Or maybe the answer is that we have to figure out how to live with Covid. I don’t know—my opinion has changed so many times in the last year. The only thing I’m sure of is that the way the government has handled this is just totally unacceptable, and it has cost people in the restaurant industry so much. When we reopened, we assumed it was for the season, and I invested accordingly. I spent $12,000 on staffing, which is a permanent loss. Never mind the thousands of dollars we wasted on food that we had planned to sell over the long weekend. I had $2,000 worth of seafood that I had planned to serve for Easter. I read that Antler’s Michael Hunter sent the province a bill for all of the kegs of draft beer that will end up going to waste. I love that. Maybe I should send my bill for sea bass.

I have taken out almost a half-million dollars in loans since last spring—$120,000 of that was CEBA loans through the federal government and then the rest was through my bank. I pay $4,000 in insurance every month at the two locations, another $45,000 in rent. Government subsidies don’t come close to covering everything. The expenses continue to add up and every week we stay closed, we are just sinking further and further into debt. I am scared and exhausted. Thankfully I’ve gotten really good at meditating over the last year. I think that’s helped me to keep my head together. I have no idea what the next step is. They say this lockdown is going to be a month long, but I’m worried that it may last longer. And then what? Part of me wants to start working towards reopening again, but another part of my feels like this is just going to happen all over again. Gun-shy would be an understatement.

Without a plan I don’t know how we’re going to survive. Last year we heard so much about how restaurants are the lifeblood of our communities. I hope that everyone understands that we are bleeding out right now.