We’re asking Toronto’s top chefs to flex their home-cooking chops and walk us through the recipes they make for friends, family and themselves

Anthony Rose is Toronto’s master of reinvention. He turned his Ossington bagel shop into a Mexican joint, and within a month of closing Big Crow and Rose and Sons, Rose transformed the Jewish deli and barbecue joint into The Grand Elvis, a restaurant dedicated to old-school American grub. Although Rose is always trying to keep his restaurants fresh, when it comes to home cooking, he has a soft spot for nostalgic recipes, especially the ones that his mom Linda Rose made for him while he was going up.

Momma Rose—a self-purported neatnik—is a bit embarrassed by the state of her recipe collection. “It’s a bit hysterical. I’m very neat but my recipes, well, I keep them in a plastic bag,” she says over speakerphone. She’s very protective of this salmon loaf recipe, though, and insisted that if Anthony was going to borrow it for this shoot, it was to stay safe in a Ziploc.

Linda has had the same hand-scrawled recipe for over 30 years—she’s been making this salmon loaf since Anthony was a kid. It’s so old she can’t remember where the original recipe came from, but it was probably from a friend. It’s not from a magazine, though, or she would have just torn out the page. “I used to tear out recipes from the magazines at the hairdresser—quietly so no one would hear—and then I’d tuck them under my arm.”

“When I was a fat little kid, I was obsessed with it,” says Anthony about the salmon loaf. “It’s salmon and cream cheese—what’s not to love?” For years, this pâté was a staple of Rose family gatherings, put out with cheese and other nibbles whenever guests came to visit. At some point, the salmon loaf was forgotten—until last summer when Rose had a hankering for the stuff.

First, toss the nuts into the oven for eight minutes at 350°F.

While the nuts are roasting, grate two tablespoons worth of yellow onion, then strain the juice by wrapping the pulp in paper towel and squeezing.

Throw the strained onion into a food processor along with eight ounces of cream cheese. Process until silky.

Take two cans of salmon and strain any excess liquid from the cans.

Then, remove and discard all skin and bones from the salmon.

Add the salmon, along with the juice from half a lemon, a teaspoon horseradish and drop of liquid smoke goes into the food processor. The exact measurement of this itsy-bitsy spoon is called a smidgen (it’s actually 1/32nd of a teaspoon). Rose thinks the liquid smoke is pretty gross, so he’s careful not to add a drop more than necessary.

Process until silky. Make sure to scrape down the contents of food processor, so that everything becomes a uniform texture.

Time for a taste test. Rose’s business partner—and sous chef for the day—Rob Wilder gives it a thumbs up.

Line a baking pan with cling wrap, and fill with the salmon concoction. Make sure to flatten the mixture with the spatula so that it forms a block shape in the bottom of the pan.

Let it sit overnight in the fridge.

The next day, using plastic wrap, shape the chilled salmon into a roll.

“This is the only acceptable time to use curly parsley,” says Rose as he sprinkles the finely chopped stuff onto all sides of the salmon log. 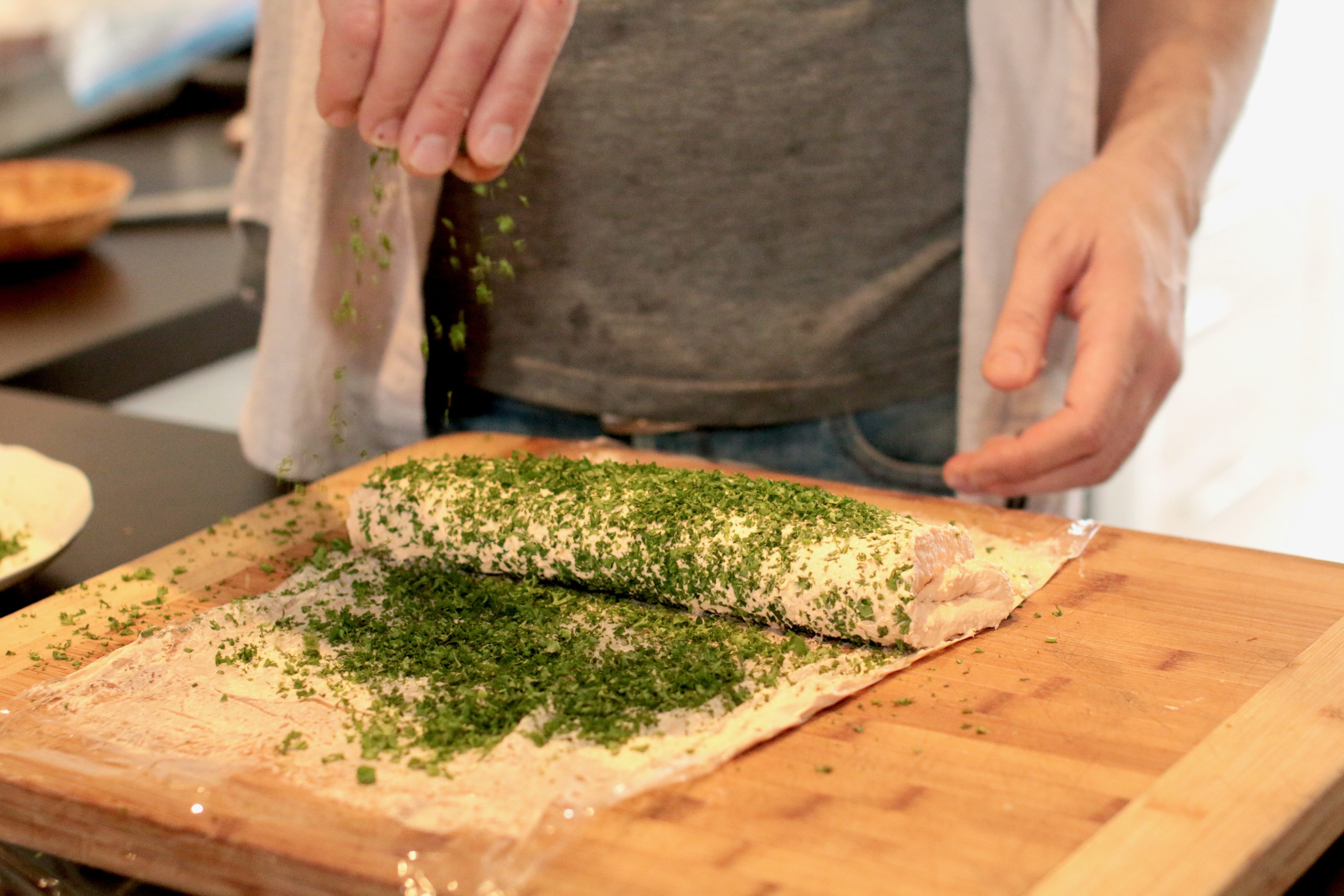 Chop the roasted nuts (hopefully you remembered to take them out of the oven) and sift them through a strainer to get rid of any nut dust. 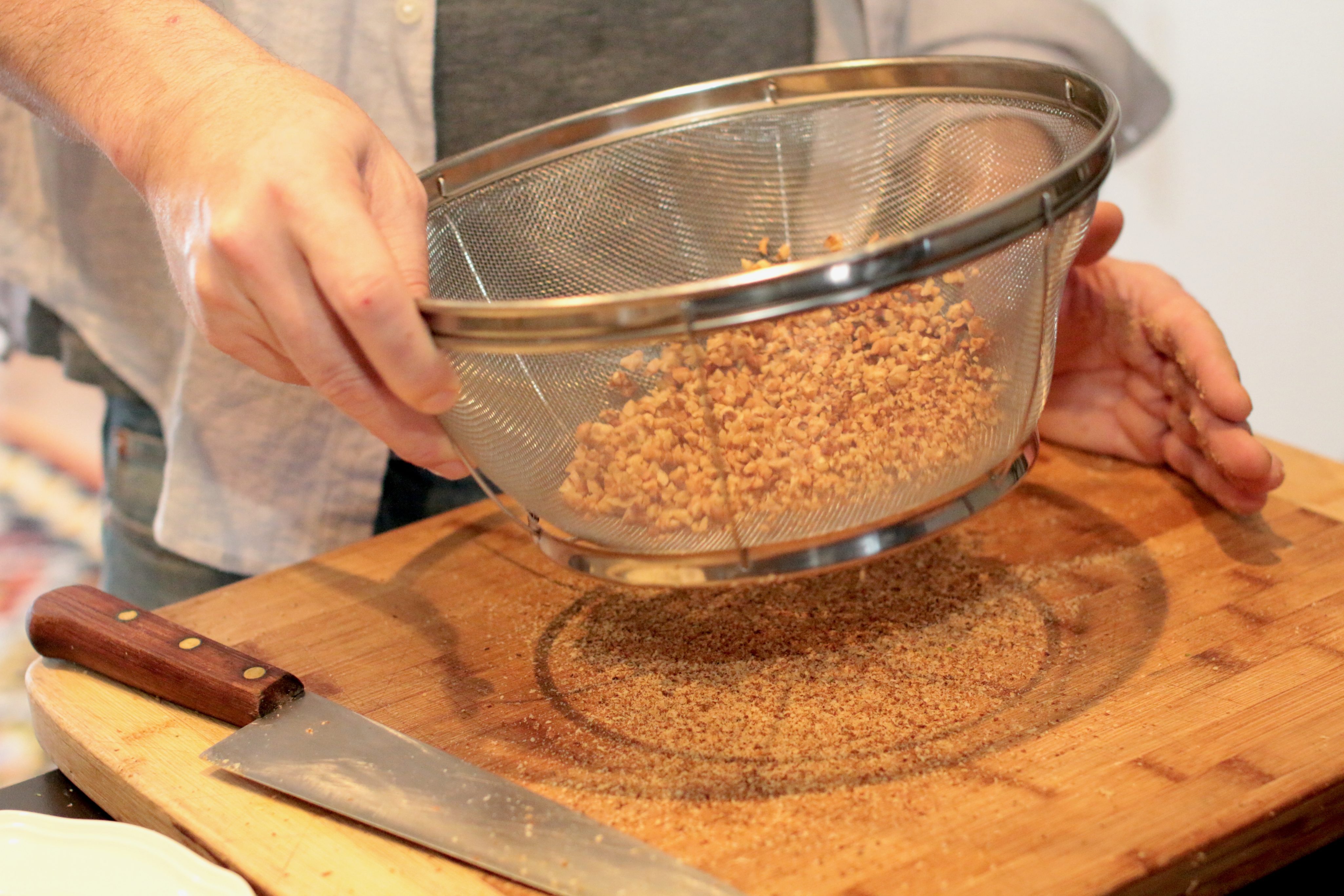 Finally, top the log with nuts, cut off the ends and serve with crusty bread or crackers.