Harley Spiller has been dreaming of today’s lunch for nearly 30 years.

We’re in a fluorescent-lit room at the University of Toronto’s Scarborough campus for Chinese Food Everywhere, a two-day event exploring the cuisine’s history in North America. Attendees are poring over some 10,000 Chinese restaurant menus that Spiller, an avid collector from Buffalo, gave to UTSC in 2014. And in a kitchen down the hall, DaiLo chef Nick Liu is preparing a meal based on the minimalist wording of one such menu, from 1898.

“It was probably the second menu I bought, and the only one I ever framed,” Spiller says. “I was at the New York Antique show. They wanted $55 for it. I thought that was ridiculous. But I had $67 in my pocket, enough for dinner and the menu.”

Spiller has been collecting Chinese restaurant menus since 1981. (He also collects, among other things, magnets, ties, ruined currency, plastic cutlery, expired ID cards and Mr. T memorabilia, which he calls “Mr. T-abelia.”) Over the years, if you were a friend of Spiller, you had to bring him a Chinese menu from any of your travels. When eBay launched, he bid on every Chinese restaurant menu available.

But this one 19th-century menu—decorated with sketches of boats, lanterns and caricatures, with a list of banquet dishes written in immaculate calligraphy—remained a favourite. And as soon as Liu was finished cooking, Spiller would finally taste what was promised by the menu’s clipped descriptions.

Spiller’s menu collection at UTSC is a goldmine for academics, grad students and food enthusiasts researching the evolution of culinary history and design. It includes menus from all over the world, including a large number from Canada. Early examples feature explanations for unfamiliar audiences on how to use chopsticks, and present Cantonese-style cooking as universally Chinese.

Over time, there’s increased focus on specific regions, and a growing presence of liquor and cocktails. Stereotypical Chinese imagery—pagodas, lanterns, red, gold, dragons—persists through the ages. Some menus feature whole sections of Canadian food, with a higher prevalence of western dishes on small-town menus. Some divide between Chinese, Canadian and Chinese-Canadian. But in one form or another, the concept of “fusion food” has been with us long before its vogue in the 1990s.

Throughout the eras, there is a consistent campaign fought on the menus against the stigma of Chinese restaurants as dirty, low or unhealthy, and it’s fascinating to see how this was addressed. One restaurant describes many of its dishes as “aristocratic.” Another seeks to put diners at ease with an explanation of the kitchen’s hygiene protocols. “We are proud to tell you that our restaurant is now electronically equipped with the latest types of modern kitchen machinery”, reads the menu, going on to list an “electric vegetable cutter”, a sterilizing ray-lamp and even the temperature of the dishwasher. Another boasts of “oven-equipped” delivery trucks. The Bamboo Terrace informs customers, “Our kitchen is open for your inspection so you may see how Chinese cooking is done.”

One of the challenges of food as a culture or art from, as opposed to music, painting or film, is that once it’s consumed, it’s gone. An eager fan can forever access Picasso’s Guernica, Patsy Cline’s “I Fall to Pieces” or The Godfather. But it’s impossible to know how the food actually tasted at George Minden’s Three Small Rooms in the 1960s, or at that unknown Chinese restaurant from 1898. There may be a few faded photographs or recipe—but you’ll never get to taste it.

“This wasn’t supposed to be a recreation of those dishes,” says Liu. “The first draft was based on that menu, but it was so vague. The Chinese description was … well, I don’t read Chinese. And the English translation would just say ‘almond’.”

The final version of the meal, mixing Chinese and European cooking styles, with liberal amounts of butter, belongs as much to the canon of Nick Liu cuisine as any region: chili-pickled fried green tomatoes; Jerusalem artichoke dumplings poached in a bacon-chaga fish stock with white fungus and truffle; beef with a black-bean bagna cauda and Toscano cheese; and marinated bass baked with a sauce of soy, caramelized sugar, garlic, ginger, coriander and star anise, covered in hot sesame-chili oil with crispy fried shallots, ginger and chilies.

“The menu just said ‘baked spicy fish’,” says Liu. “You can’t really know how those dishes tasted. That’s why I focused on where Chinese-Canadian cuisine is going now. You can do interpretations. But I don’t think they really represent those dishes.”

To Spiller, the unknown and unknowable were finally put to rest. He spent his morning with the professors and grad students, showing off his menus as enthusiastically as any child would with their favourite Lego set. He’ll never know how the original dishes looked or tasted, but when he saw Liu’s food, he held his face in his hands, as if to protect his widening smile from bursting the threshold of his cheeks. For a collector like Spiller, the joy of this meal begins and ends with his toys finally coming to life. 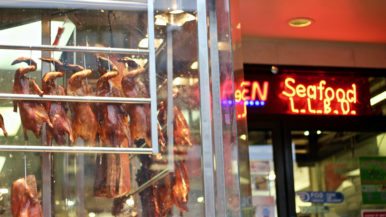 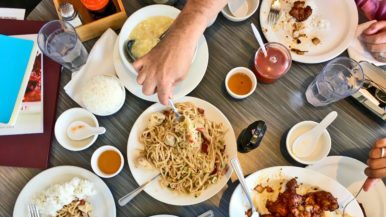 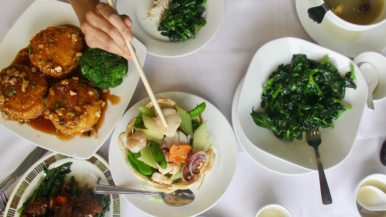 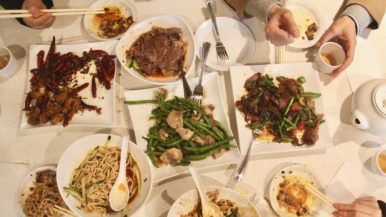