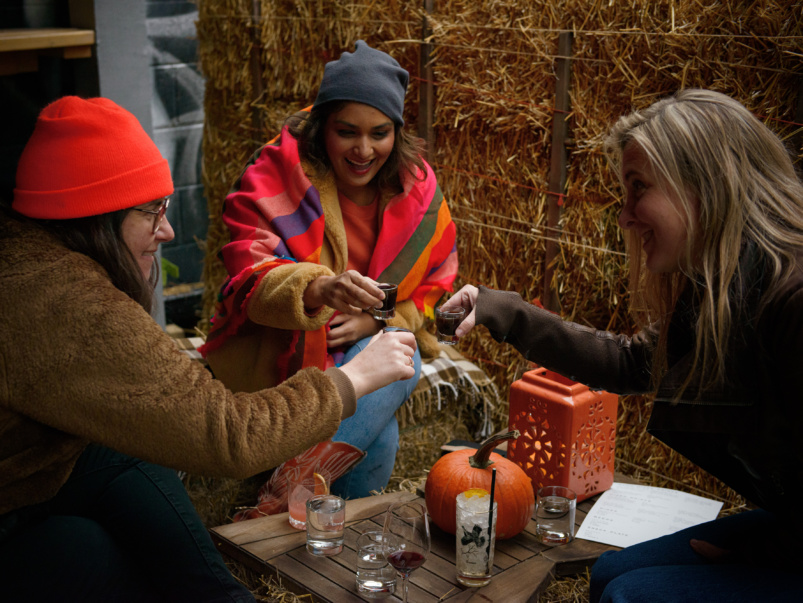 Hay bales, hot drinks and heat lamps: This secret patio behind a secret bar is serving up boozy cocoa and fall-on-the-farm feels 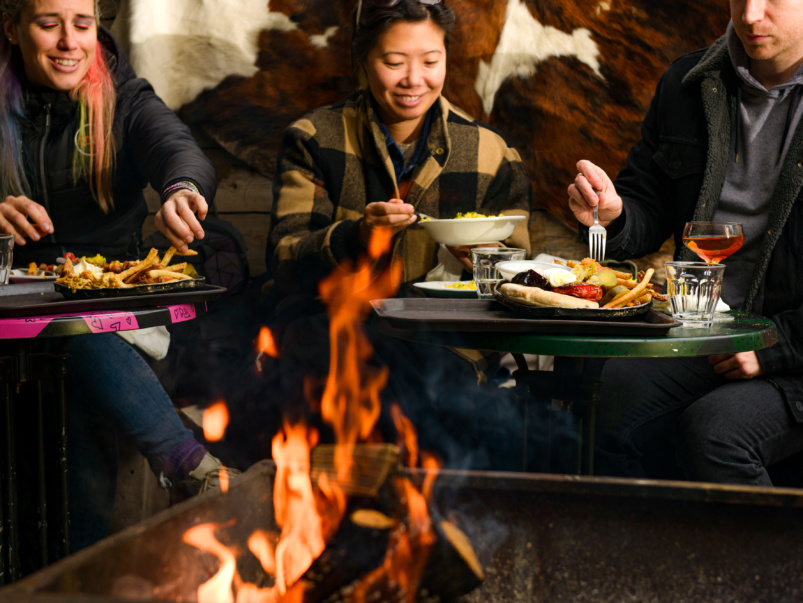 Actinolite has been serving multi-course tasting menus since it opened in 2012. But, when Covid-19 hit, intimate, hours-long dinners inside were no longer viable. “We know that it’s a privileged way to eat,” chef and owner Justin Cournoyer says, “and that didn’t seem right for these times.” Cournoyer has transformed the restaurant’s backyard, used throughout the summer for outdoor dining, into a cottage-y space heated by three open fires, where Actinolite will be serving up its Bonfire Dinners as the weather cools. There are still set menus, but the space—cozy, rustic and forever smelling of campfire—lends itself to a much more low-key vibe. “The way we did things before was a luxury,” general manager Merrin McHugh says. “Right now, what we’re doing is about making people feel comfortable and safe.” Here, McHugh and Cournoyer explain what it’s taken to set up their 26-seat back space—and why they’re taking things two weeks at a time.

Step 1: Work with what you have

Cournoyer owns the Actinolite building with his wife. Before Covid, the restaurant had a small side patio that could accommodate 16 people, but Cournoyer used the backyard as a garden for the restaurant, as well as space for himself and his family. When the pandemic hit, expanding to use the space for the business just made sense. In the summer months, patrons sat on tables that were set out in the grass; now, that space is covered in wood chips and surrounded by stacks of firewood. There are no propane heaters at Actinolite (“Too expensive to buy, too expensive to run”), so for heat, Cournoyer did some scavenging: one of Actinolite’s open fire pits is from his cabin up north, another is a wheel well he picked up from his mechanic, while a third is a cauldron that Cournoyer’s neighbour was ready to scrap.

Step 2: Make the meal fit the vibe (and the weather)

Actinolite was renowned for its tasting menus, but in taking things outside, meals have become a little less white-tablecloth in both presentation and service. “I prided us, I think, on never having stuffy service,” McHugh says, “but when people are paying that much for a set menu, you do have to be at a certain level. We’re still giving great service, but I would say it’s a more relaxed atmosphere.” Case in point: Many of Actinolite’s winter-menu dishes—such as goulash and roasted pork shoulder—will be brought to the table in copper pots and placed on sliced-wood trivets, in order to maintain the temperature of the dish; diners will then serve themselves. Cornoyer is also taking the opportunity to cook over an open fire as much as possible. “We have to complement the feeling out here,” Cournoyer says. “And something to take into consideration now is that we need the food to keep people warm.” Guests are also offered a hot apple cider (with optional bourbon), kept bubbling in a large cauldron, as soon as they arrive.

Step 3: Don’t get stuck on a concept

A recent surprise snowfall collapsed the tarp that covered Actinolite’s back patio; in order to keep things open throughout the winter, Cournoyer and McHugh are, as Cournoyer says, “in the midst of problem-solving.” The team may erect smaller canvas tents to cover individual tables when things get colder; another option is using the piles of firewood that surround the patio to support temporary shelters during the winter. The team wants to avoid anything that will require a building permit, as the uncertainty of Covid-19 dining means they could be forced to make a hard pivot, or shut down, at any time. “We’re always thinking about money, and we’re thinking just two weeks at a time,” Cournoyer says. “The tarp is an insurance policy, but we know now that it won’t work in the snow. So, what’s going to get us through the next 14 days, weather-wise? And once we’re through those two weeks, we’ll start planning again.”

While the Actinolite team is taking things on a 14-day basis, that hasn’t stopped them from thinking up some big ideas for the months to come. Cournoyer is excited about the idea of tailoring his menus to suit the new outdoor space, all in keeping with the restaurant’s commitment to small, local providers and seasonal ingredients. In December, he’s thinking of a festive fondue; and to play into the coming winter weather, he’s considering bringing in Russian inspiration with cold seafood, such as oysters and gravlax. Cournoyer and McHugh want to make sure that no matter what the menu looks like, guests are getting what feels more like an experience than just a meal out. “It’s not the time to get too creative with the food,” Cournoyer says. “It’s time to get creative with the way you run your business.”