What was served at Buca Yorkville’s $300 Michelin-starred dinner

What was served at Buca Yorkville’s $300 Michelin-starred dinner

Last Tuesday’s dinner at Buca Yorkville was the sixth edition of the restaurant’s “Sotto una buona stella” (“under a lucky star”) series that teams up Rob Gentile with Michelin-starred Italian chefs. It was supposed to be the last of the series, but the one-off meals were such a hit that another three dinners have been added for 2017. Chef Mauro Uliassi, who holds two Michelin stars, took over the Yorkville kitchen on Tuesday for a $300 multi-course feast with wine pairings; proceeds went to the Central Italy Earthquake Relief Fund. Here, some shots from the evening. Instead of dough, these ribbons of tagliatelle “pasta” were made from paper-thin squid that was cooked for four hours. The delicate strands were finished off with cuttlefish ink, seaweed pesto and puffed quinoa. A flute of Bianca Vigna prosecco accompanied the plate. Roast lobster tail was served on a trio of sauces: swiss chard, white-wine shallot and mantis shrimp. A rosé from Piedmonte accompanied the Senigallia specialty. This homey plate, billed as “calamari soup, country salad,” was inspired by a dish from Uliassi’s food truck in Senigallia, Italy, Uliassi Street Food. Stewed calamari and sweet peas arrived with a country salad made from fresh green peppers, tomatoes and onions. It came with a crisp verdicchio from the Marche region. For the fourth course, cloud-light potato gnocchi came in a buttery lemon sauce, with a sprinkle of fresh Sicilian almonds. The bowl was paired with a glass of Parusso’s 2015 Langhe sauvignon blanc. Gentile’s dish was seared Alaskan black cod topped with pork hock consommé, pickled fennel, potato spuma (like velvety mashed potatoes) and a sprinkling of saffron. The pairing for this was a montepulciano from Uliassi’s home region of Marche. The evening ended with a cake made with Gianduja chocolate and squid ink, and covered with Italian meringue. Gentile torched each guest’s plate tableside. Here is he torching one now. Not so serious this time. And signs the evening’s menu with Gentile. The Uliassi and Buca kitchen staff. 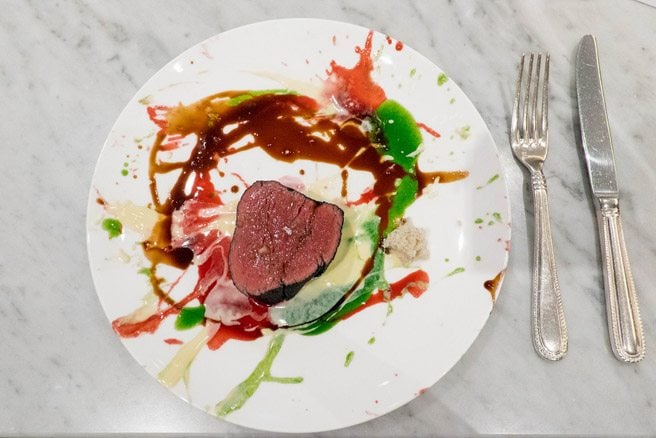 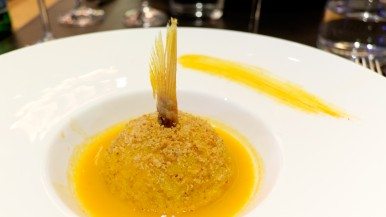 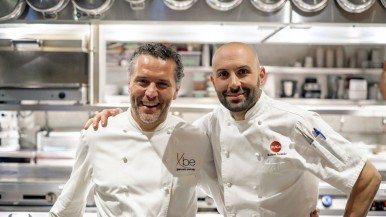