Where to snag gluten-free treats, splurge on fancy dinners and stock up on gourmet ingredients 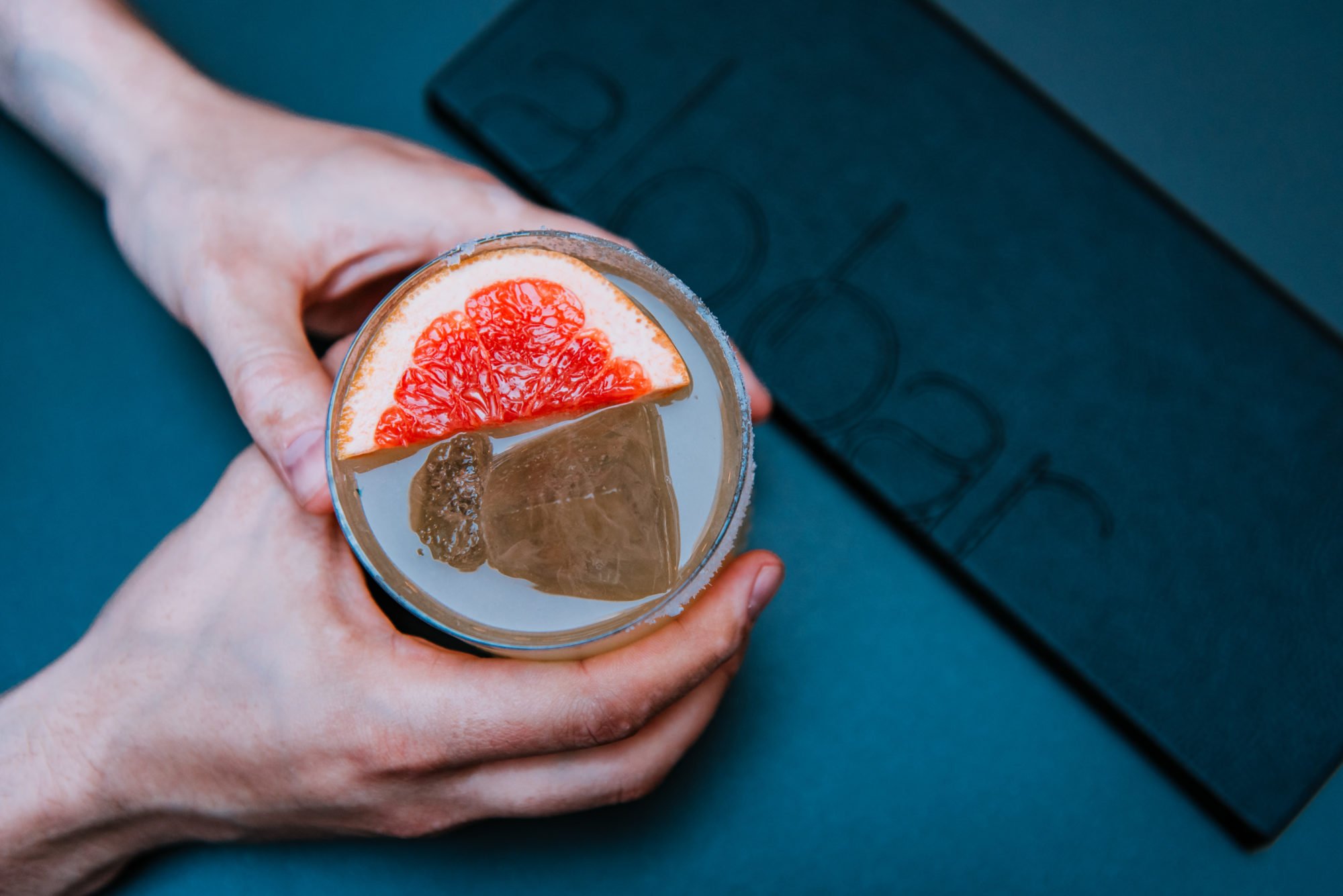 Alobar, the more approachable version of chef Patrick Kriss’s impossible-to-book Queen and Spadina tasting hotspot, opened in the fall of 2018 next to a discreet courtyard off Cumberland Street. The space is contemporary yet cozy, filled with richly hued leather banquettes, brass LED lighting and a herringbone floor any design lover would swoon over. The menu focuses on sharable plates and seasonal ingredients: there’s hamachi wrapped in Iberico ham, sea scallops in puréed summer corn and a 24-ounce ribeye served with cremini mushrooms. As for drinks, martinis are the pick: the Pop Gun is especially tasty, with Bulleit Bourbon, a cordial made from toasted blue corn, egg white and a spritz of mescal. 57A-162 Cumberland St., 416-961-1222, alobaryorkville.com. 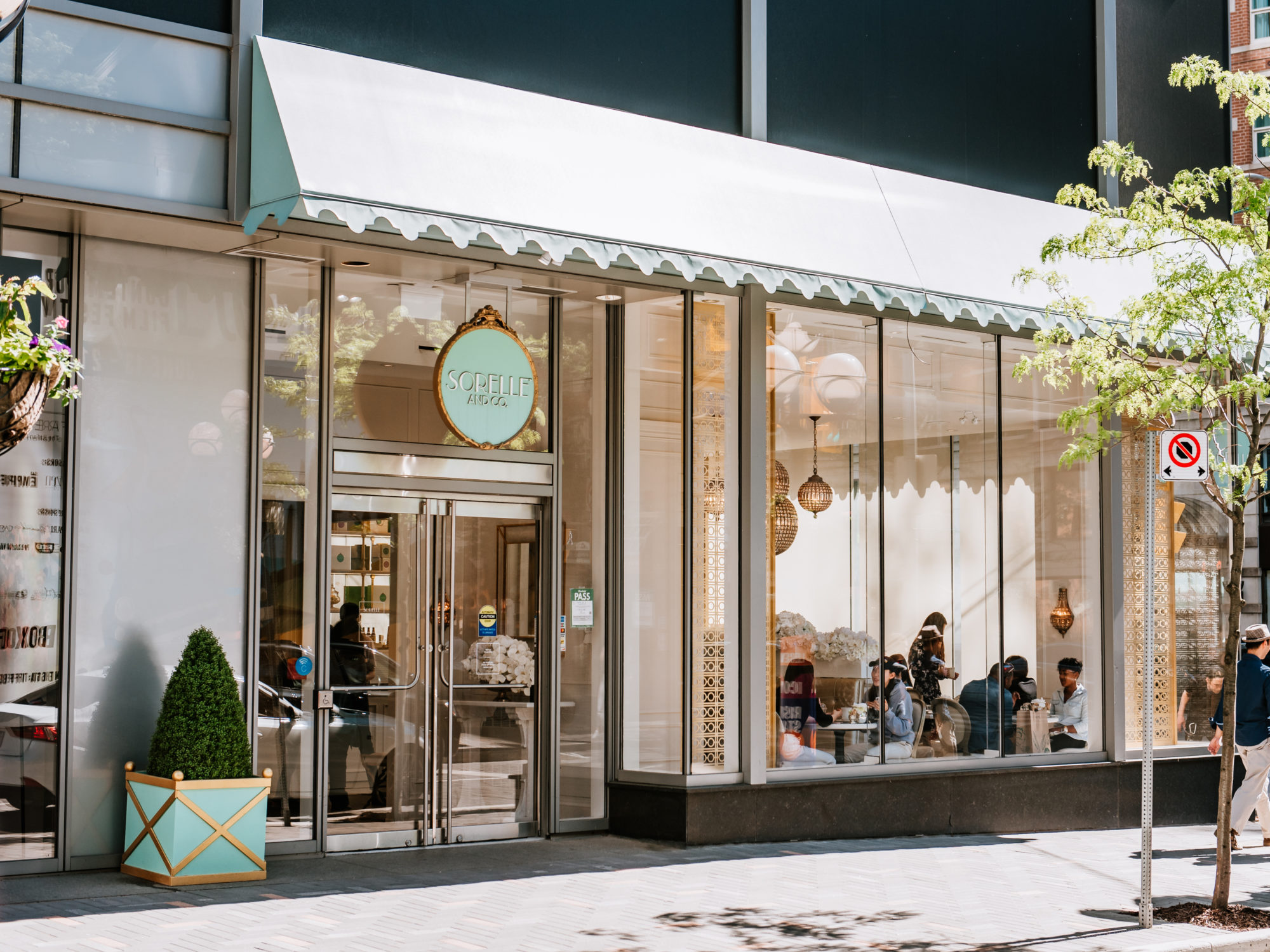 For gluten-free treats: Sorelle and Co.

Sorelle and Co. was founded in Vaughan in 2016 by a mom of five girls, all of whom had food allergies. She was fed up with trying to find bakeries that catered to her kids’ needs and decided to open her own. Sorelle and Co. make a wide range of gorgeous, indulgent baked goods (from s’mores sandwiches to custom four-tier cakes), all made without animal products, gluten, nuts or soy. The Yorkville boutique opened in 2017, and is an especially charming place to sit down and grab a slice of cheesecake and cup of jasmine tea under the gilded chandeliers. Their orange-blueberry doughnut, which tastes more gluten-y than it is and is topped with marbled icing pretty enough for a work of art, made our list of the best doughnuts in the city. 161 Yorkville Ave., 416-234-1340, sorelleandco.com. 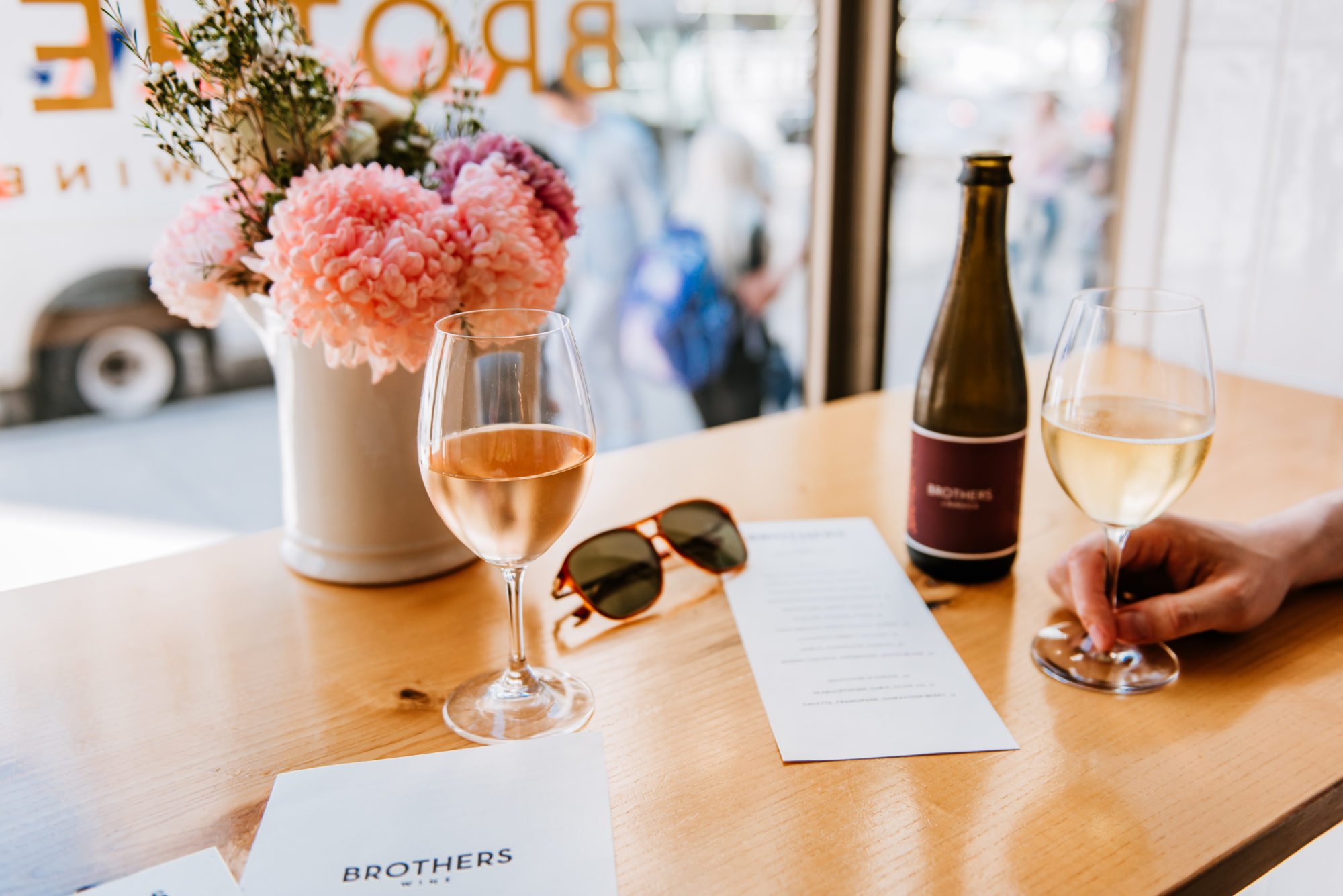 When Brothers opened two years ago, it was a tiny, under-the-radar restaurant right next to the decidedly nondescript entrance to the Bay subway station—until we named it the best new restaurant in Toronto in 2017. Since then, it’s been written up in the New York Times, and it’s only getting more difficult to secure a reservation in the 30-seat dining room. The attention is deserved: the persimmon salad with charred escarole and shavings of Ontario ewe’s milk cheese is always a treat for the taste buds, while we guarantee you’ll be dreaming of the pillowy gnocchi with pecorino and nutty mushrooms for days. Meals are complemented by an extensive yet relatively affordable wine list—including plenty of biodynamic options for natural wine lovers. 1240 Bay St., 416-804-6066, brotherstoronto.ca. 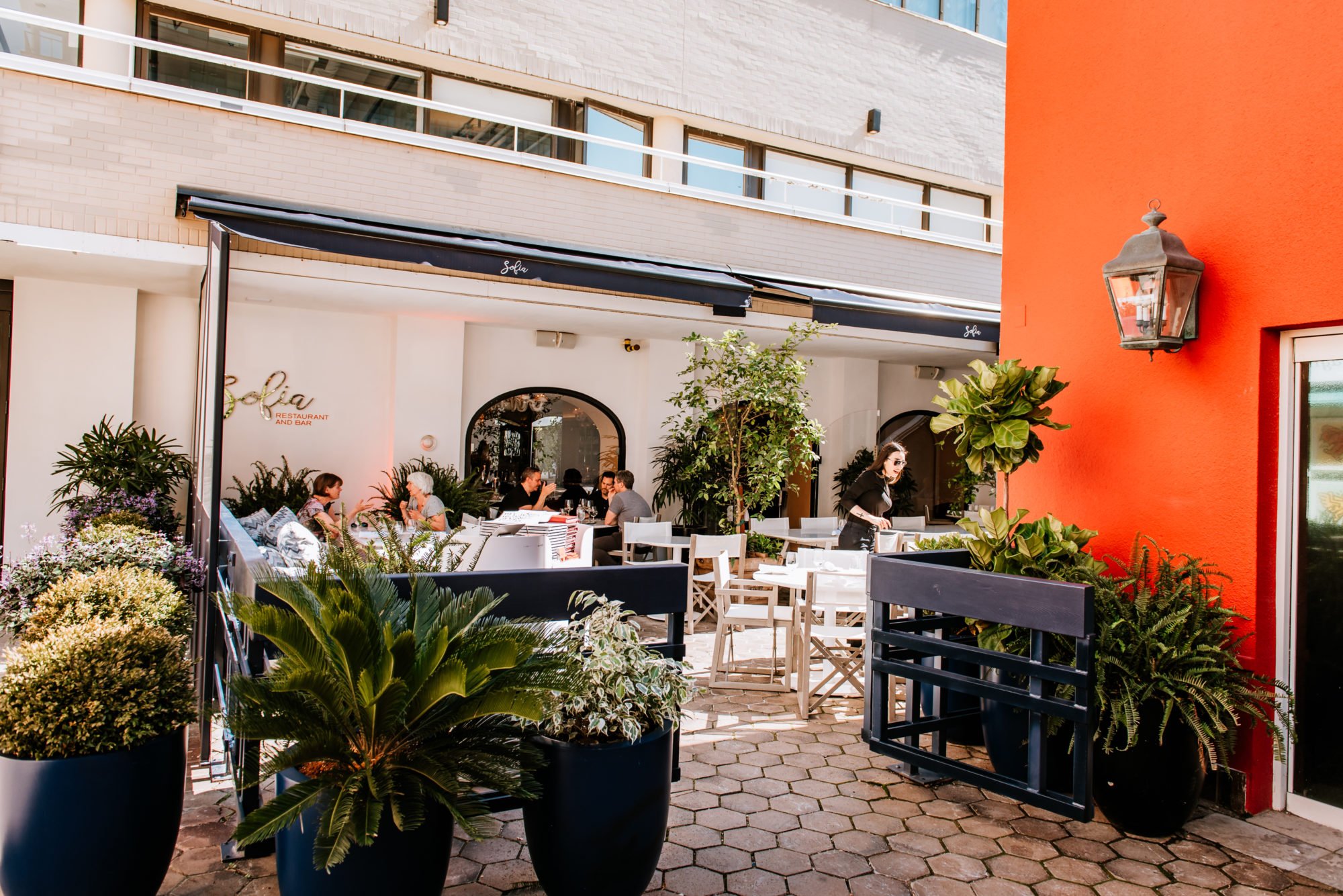 Local club king Charles Khabouth opened his upscale Italian restaurant, Sofia, just over a year ago. Chef Rob LeClair cooks up northern and southern Italian cuisine, including citrusy salads, house-made pastas and branzino, and steaks prepared in a wood-burning stove. The space, which was designed by Studio Munge, has plush red velvet seating, mirrored columns and marble herringbone floors. A white grand piano isn’t just for show: there’s live music nearly every night, making the place feel like a private Prohibition-era lounge from the 1920s. On Lobster Mondays, guests can choose from a strictly lobster-focused menu, including linguini, a chilled salad and a grilled Atlantic lobster. If you really want to ball out, you can pair it with an $80 glass of Reva Barolo. 99 Yorkville Ave., 416-479-8974, sofiayorkville.com. 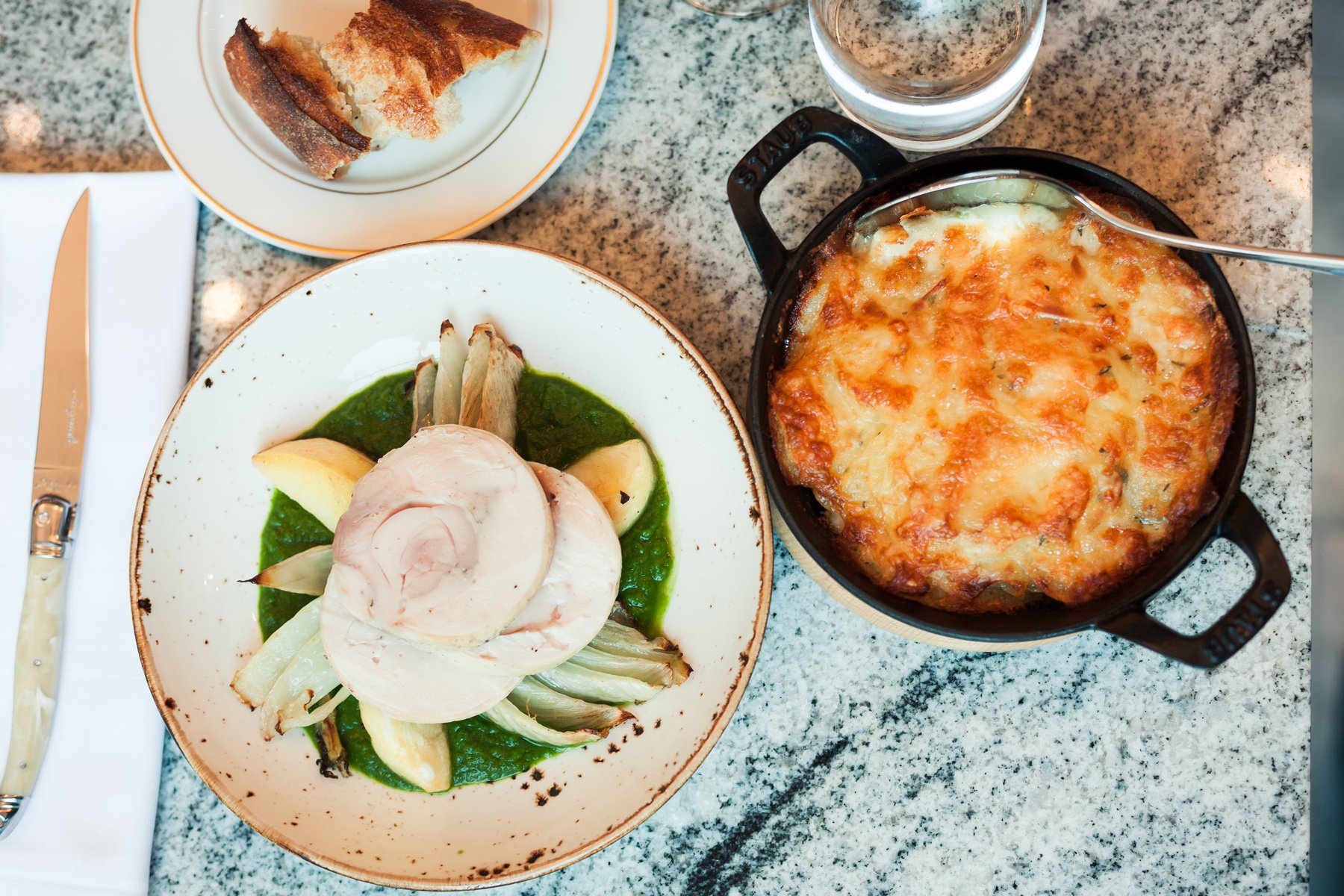 Chabrol is one of the most charming restaurants in the city. Tucked away from the bustle of Yorkville Avenue, Doug Penfold’s French bistro serves up southern French cuisine under sparkling chandeliers in a cozy space that feels like it should open up onto a Toulouse courtyard. For evening reservations, the restaurant has added a second, more spacious dining room that’s ideal for groups or anyone looking for a more formal atmosphere. The restaurant’s name comes from the French term for adding a splash of wine to the last few spoonfuls of soup to draw out the flavour—and the menu is just as obsessed with putting taste before all else. To start, there’s Imperial Osetra caviar, or foie gras served with sea beans, pear and hazelnuts. A seared flatiron steak with king oyster mushrooms is the natural choice for a main, but you also can’t go wrong with the daily fish in beurre blanc—especially when paired with a glass of fine chardonnay. 90 Yorkville Ave., 416-428-6641, chabrolrestaurant.com. 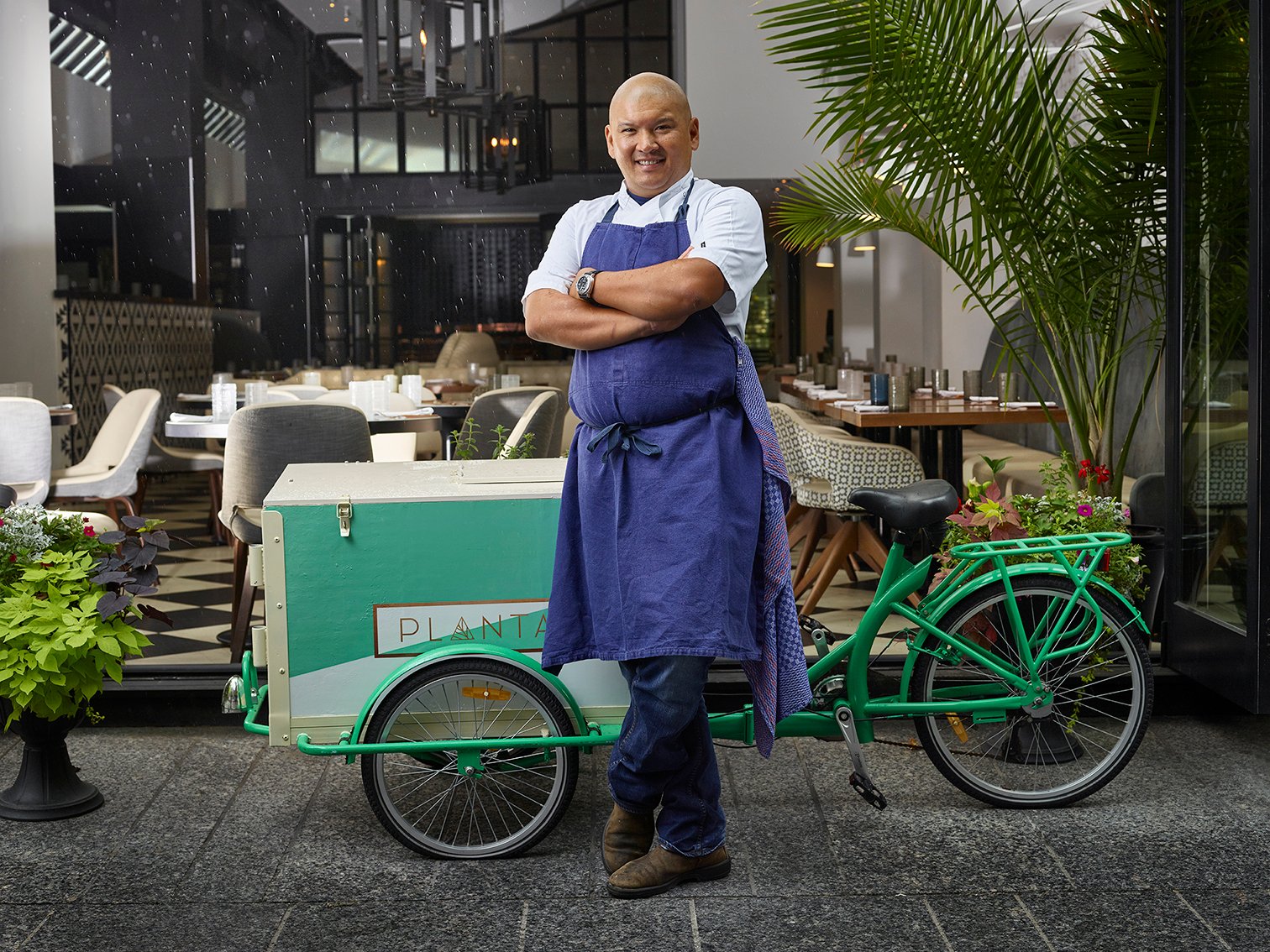 When Planta launched in 2016, the concept of serving an entirely vegan menu in a stylish, upscale environment that didn’t cater to the granola crowd was groundbreaking. Now, of course, it’s a serious culinary trend, and the restaurant’s been so successful (perhaps by avoiding the term “vegan” altogether) that it’s expanded to include two other outposts in Toronto and a restaurant in Miami. Helmed by chef David Lee, the menu features mouth-watering items that are so rich in flavour you never miss the meat. To start, we’re fans of the coconut ceviche and lentil pâté with grainy mustard. The burger is by far their most famous main course: it’s made with a spiced black bean, lentil and beetroot patty that’s sure to impress even the staunchest carnivores. 1221 Bay St., 647-812-1221, plantarestaurants.com. 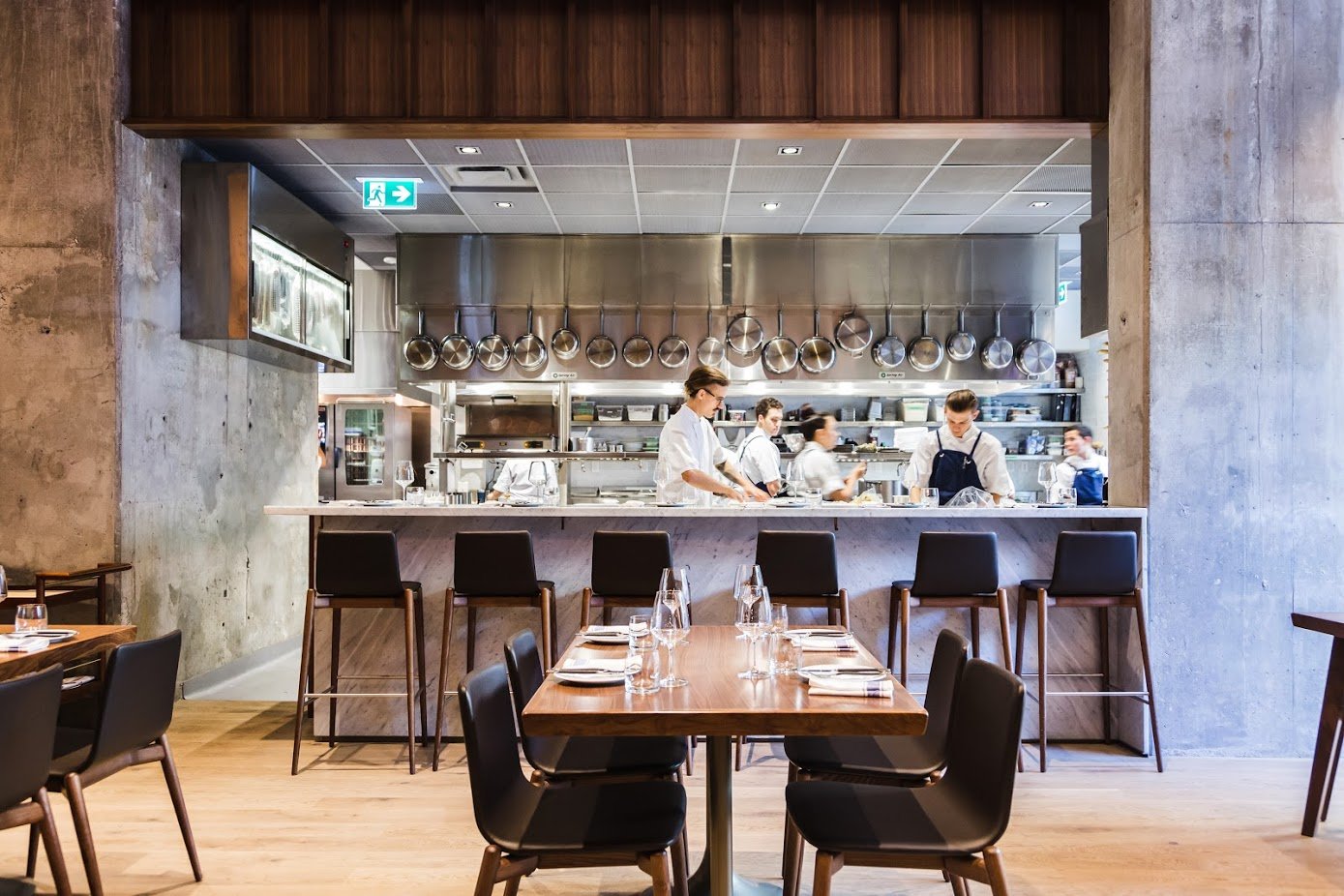 Buca Osteria and Bar is the third iteration of Rob Gentile’s Italian empire, and it opened to the delight of Yorkville foodies in 2015. These days, it’s managed to remain a neighbourhood hotspot and one of the most coveted reservations in town, thanks in part to a showstopping dining room with white oak floors and gleaming metallic accents. Food-wise, it’s best known as the coastal cousin to the original King West location, serving some of the freshest seafood you can find. We’ve named their branzino crudo, which is deboned tableside, one of the city’s most essential dishes, and there’s a $55 truffle-topped pizza that’s worth every penny. 53 Scollard St., 416-962-2822, buca.ca. 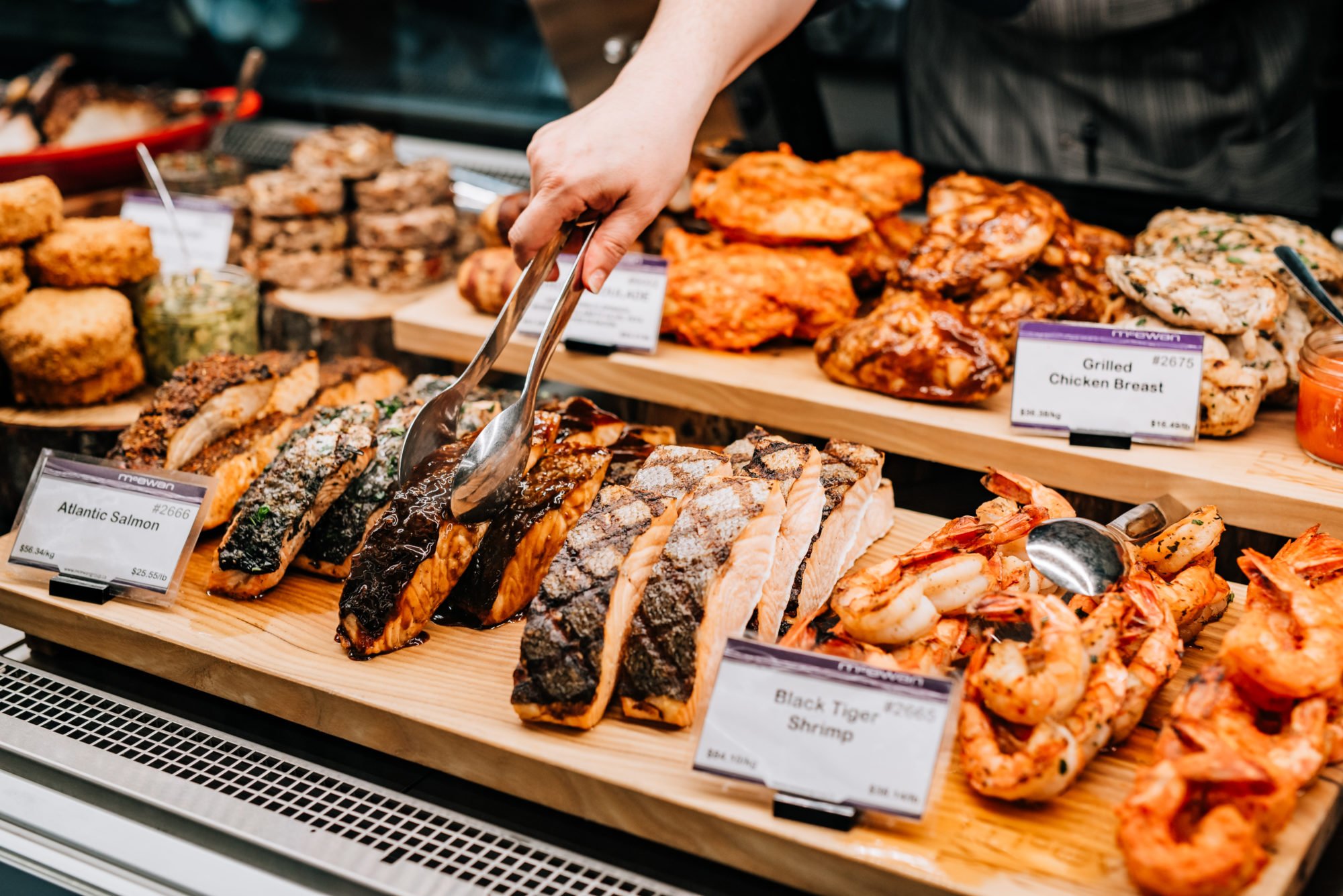 The grocery game in Yorkville has stepped up hugely in the past few years, with Whole Foods and Pusateri’s offering an impossibly gourmet selection of goods. The latest arrival is McEwan’s Grocery, which takes up a 17,000-square-foot space at Yonge and Bloor. It’s modelled after high-end European grocery stores, with individual stalls peddling everything from cold-pressed juice to Le Dolci’s unicorn cakes. Nine-to-fivers can grab pre-made Italian sandwiches and fresh sushi rolls, or opt for just-sliced porchetta and prime rib from the carving station. You can also stock up on premium ingredients for hosting an epic dinner party—including Bymark’s own beef burger patties, available at the butcher shop. 1 Bloor St. E., 416-975-0808, mcewangroup.ca. 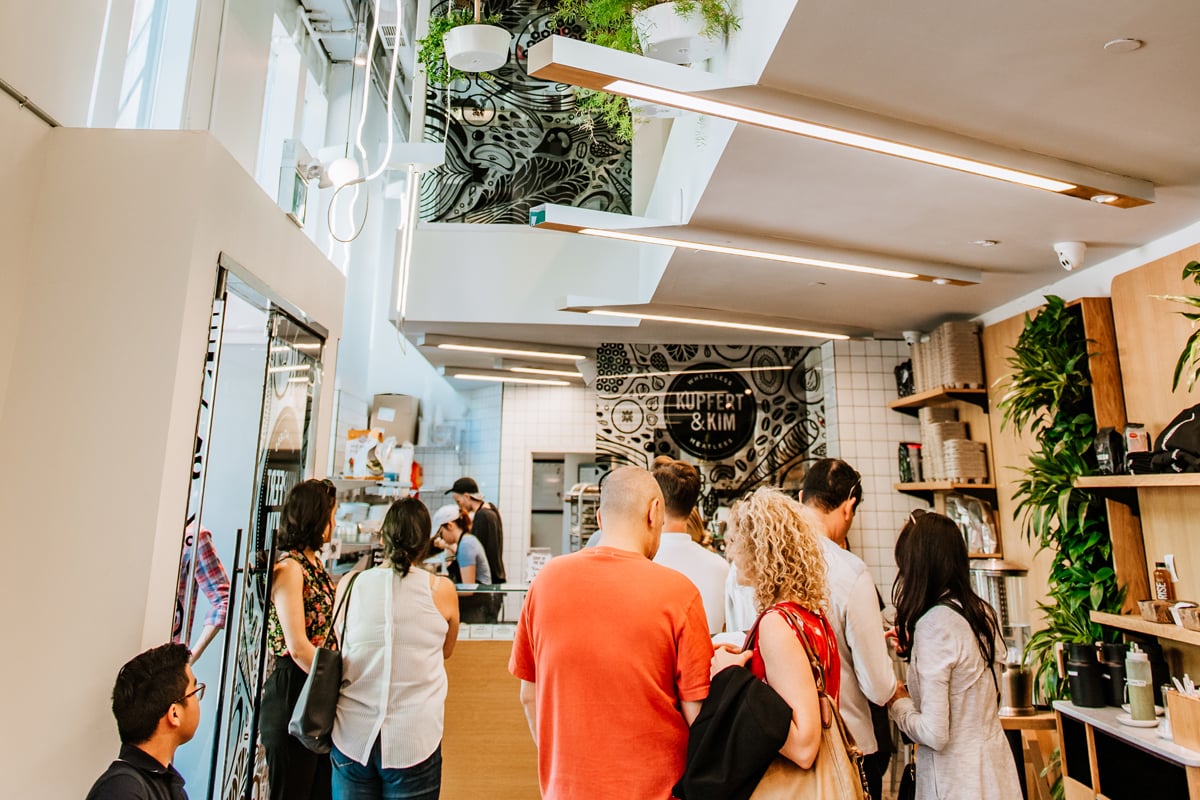 For guilt-free eats: Kupfert and Kim

Kupfert and Kim has been synonymous with wholesome, satisfying, plant-based meals since it launched to major lineups in the PATH in 2013. Its Yorkville outpost—the seventh in the city—opened earlier this year in a bright, fern-filled space behind Holt Renfrew Men. As always, their ingredients are naturally gluten-free, and nearly everything is made from scratch in-house, including sauces, pickles, curries and patties. Any piece of produce on the “dirty dozen” list (greens and berries, for instance) is sourced organic. This new location marked the launch of a selection of gluten-free toasts, but you can still snag its signature hearty bowls and fresh salads. We named its animal-free miyeok guk, an outstanding take on the soupy, meat-based Korean dish, one of the city’s best vegan dishes. 100 Bloor St. W. (enter at back on Critchley Lane), 416-925-1222, kupfertandkim.com. 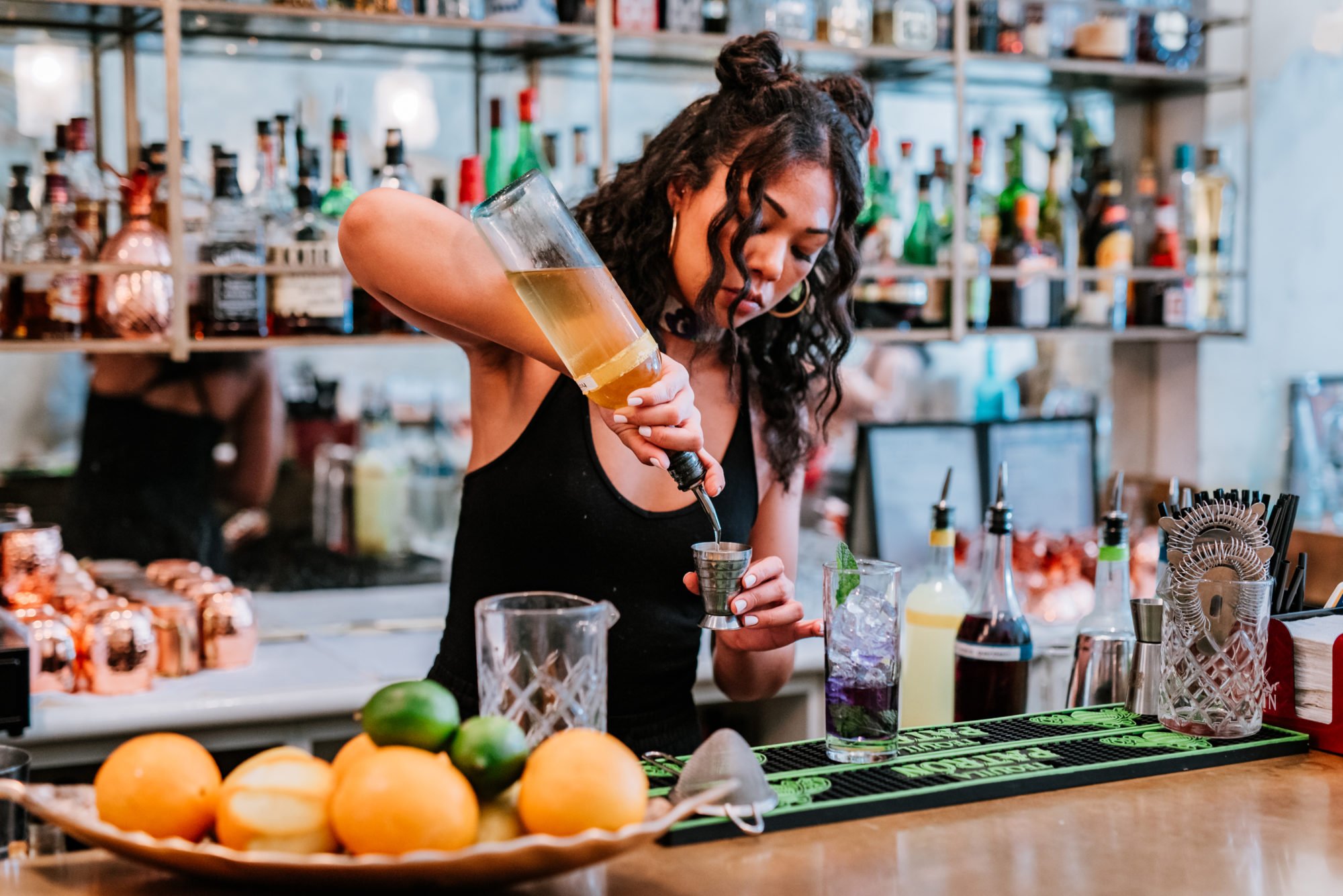 Bar Reyna is Yorkville’s most idyllic haunt for after-work cocktails and snacks. Nicki Laborie opened the Mediterranean lounge in a two-storey Victorian in 2016, and enlisted Solid Design and Build to turn it into a regal yet rustic escape. The back patio is especially dreamy during summer months, with rows of twinkling lights and live jazz every Thursday. For casual al fresco evenings, we recommend ordering the kaleidoscopic veggie flower pot and the delightfully salty halloumi souvlaki. And to wash it down? Their signature $30 cocktail, Her Royal Highness, is a tropical delight that’s served in an Instagram-worthy copper pineapple. 158 Cumberland St., 647-748-4464, barreyna.com.

For more information on dining in Bloor-Yorkville visit bloor-yorkville.com.