StreetARToronto was launched by the city in 2011 with two main goals: to reduce graffiti vandalism and help support street artists. These days, it provides workshops for local artists and regularly hosts open call-outs for public art, often on themes of diversity and inclusion, to decorate Toronto’s empty walls and alleyways. So far, the initiative has sponsored over 1,000 pieces around the city, which plaster everything from 20-storey buildings to small traffic signal controller cabinets. When Covid-19 hit, the organization asked artists to submit ideas for murals honouring front-line workers. Here’s what’s been completed so far. 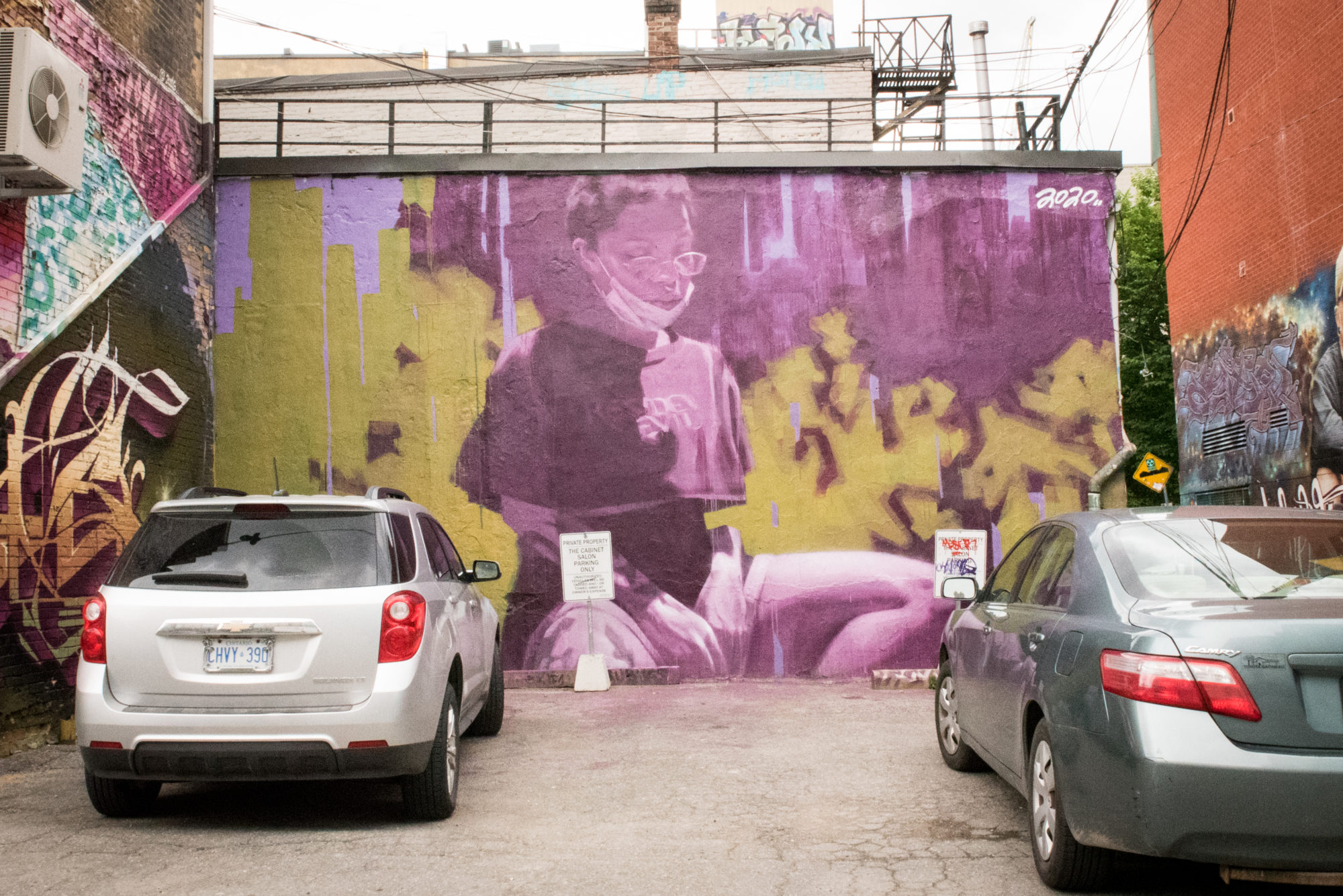 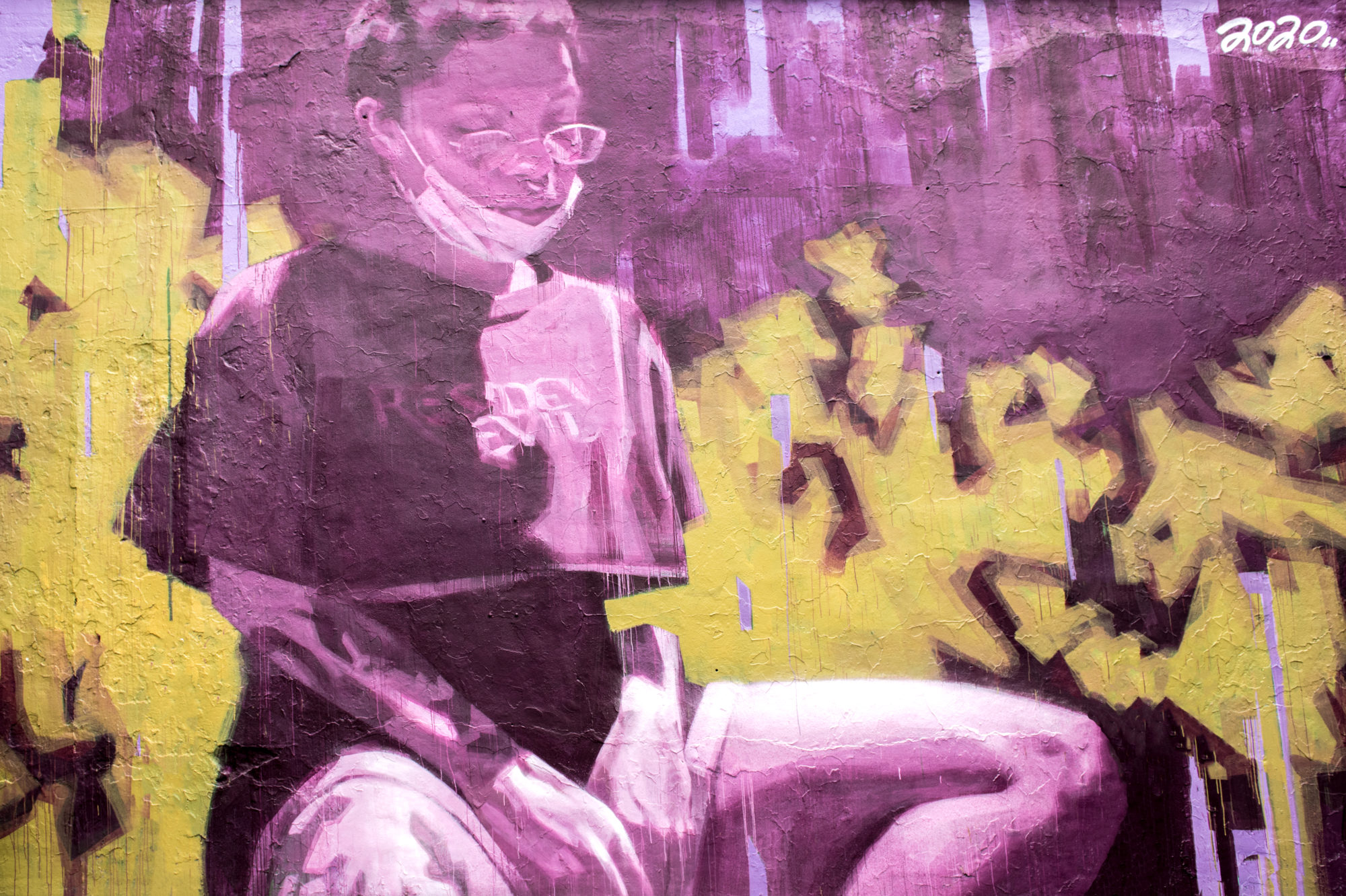 Emmanuel Jarus, an artist and muralist, has redone this same wall near Graffiti Alley three times over the past six years. He completed his latest reinvention during Covid-19, and realized it perfectly fit StreetARToronto’s front-line heroes program. The original idea came to him while he was contemplating what to paint on the wall and happened to run into an old friend in a nearby parkette. She was taking a break from working at a cannabis store. He thought her mood and stance perfectly reflected the exhaustion and uncertainty of the current moment. “I like to observe things—I call my work ‘painting journalism’—and my murals happen organically,” Jarus says. So, he snapped a bunch of photos of his impromptu model, created an image on his iPad and selected his colour palette from whatever was available at the discount warehouse down the road. The result is a striking image which Jarus hopes passersby find relatable and honest. 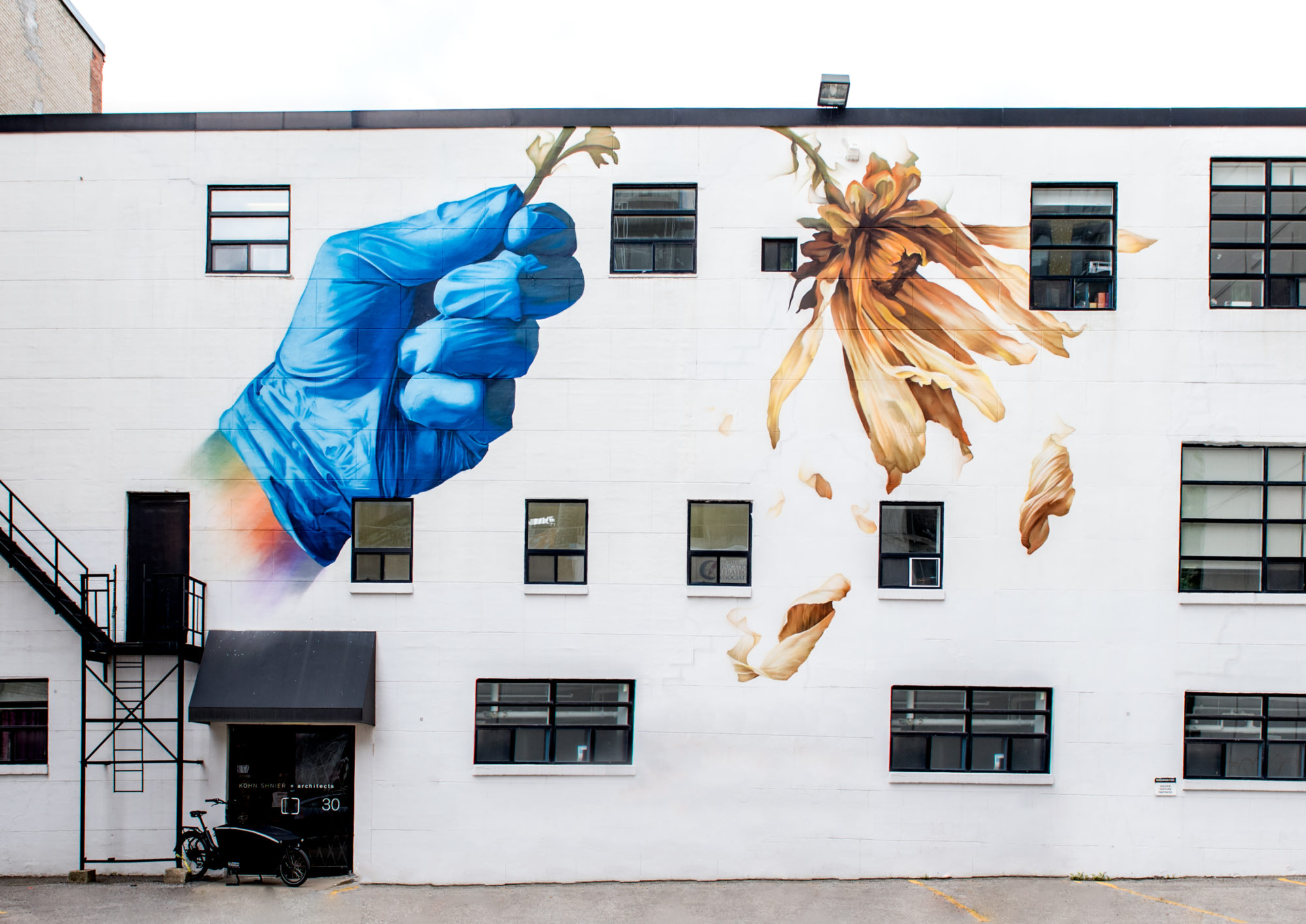 Alexander Bacon is an internationally recognized artist who’s been painting since he was a teenager in the 1990s. His vibrant, large-scale pieces, featuring portraits and historical references, can be spotted all over Toronto, including Kensington Market and the Entertainment District. This massive mural near Adelaide and Portland features a hand clad in a blue medical glove holding a wilting flower. The idea came to him when he was submitting ideas for a virtual art festival in Puerto Rico. The flower is meant to represent the fragility of life, and the gloved hand represents the strength of our front-line workers. The scene is also supposed to show the sacrifices everyone is making for the most vulnerable in our society. “We basically shut the world down for people who aren’t strong enough to fight this virus,” says Alex. “I think it’s beautiful humanity is willing to do that.” The piece took Alex three days to paint, and he finds people still interpret it in different ways. Some simply find it aesthetically pleasing, but when he showed it to his uncle, who is a local doctor, he immediately recognized it as a tribute to their work—and brought all his colleagues down for a group viewing. 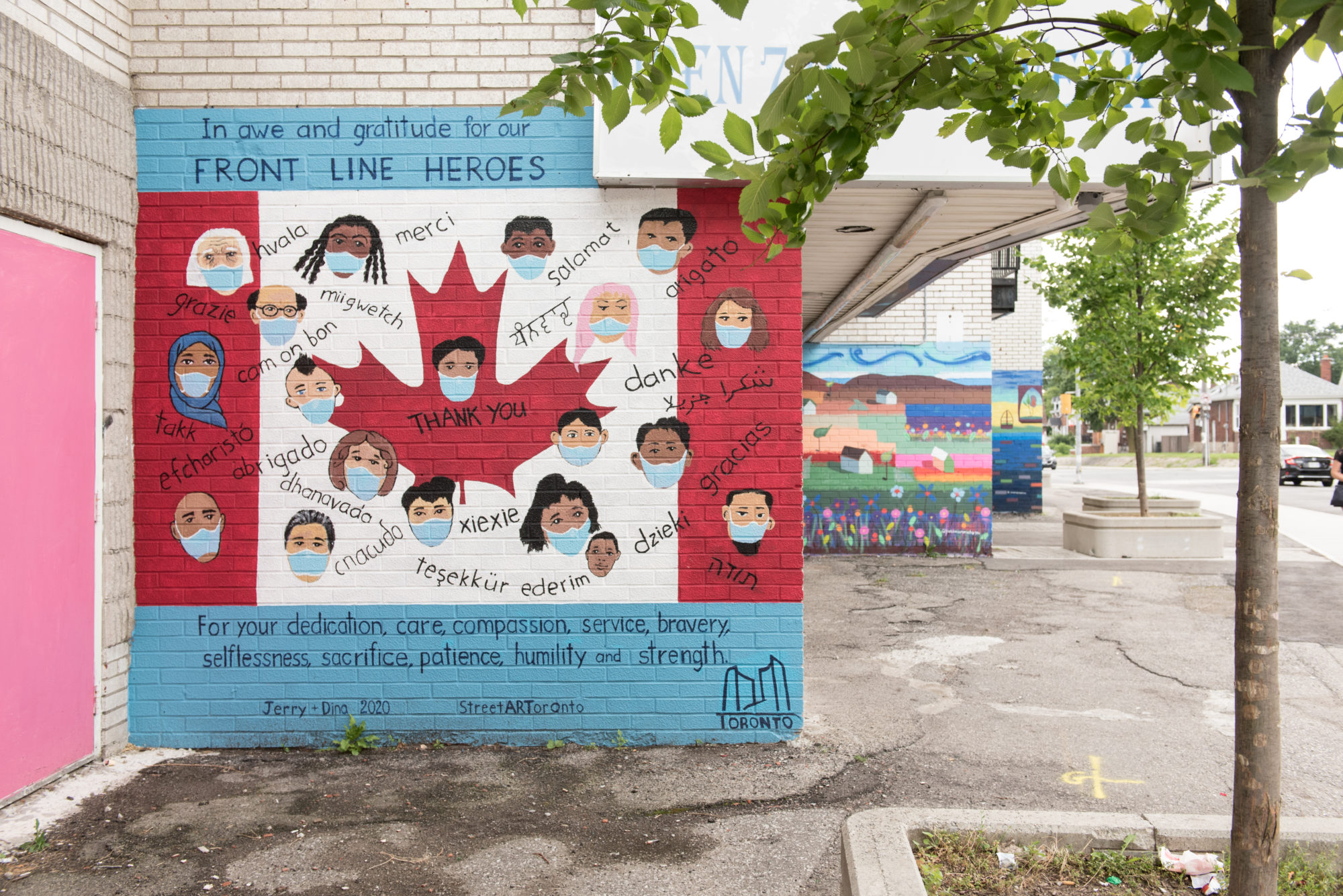 Jerry Silverberg is a 70-year-old visual artist and printmaker who has been involved with StreetARToronto since 2011. His idea for this project centred around gratitude, and he wanted to represent it in a way that was clear, attractive and engaging. He decided to focus on the words “thank you,” and thought about who would be saying those words. “Because we’re such a diverse city, if we’re all saying thank you, it would be in tons of different languages,” says Jerry. He says the people of Toronto speak too many languages to include them all, but added the native languages of passersby who wanted to be included. One man from Turkey wrote out “teşekkür ederim” in Turkish script on a napkin, and Jerry added it in at the last minute. “Hopefully it gives people a moment of pause to reflect on what we’re going through in this pandemic, and to give thanks,” he says. “And perhaps that becomes bigger, turning into gratitude for your mother, for your father, for everything else in your life. Thank you is two really big words.” 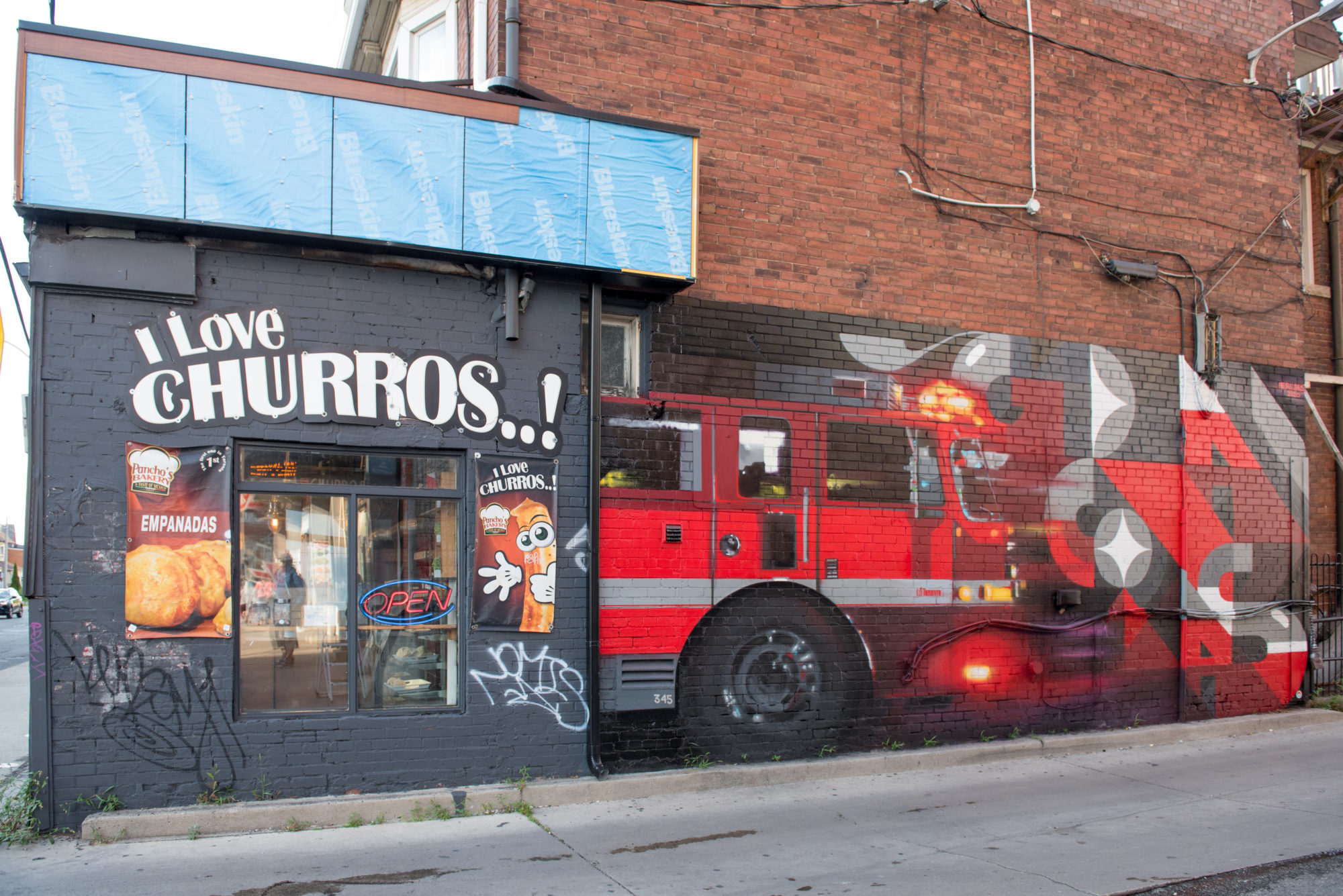 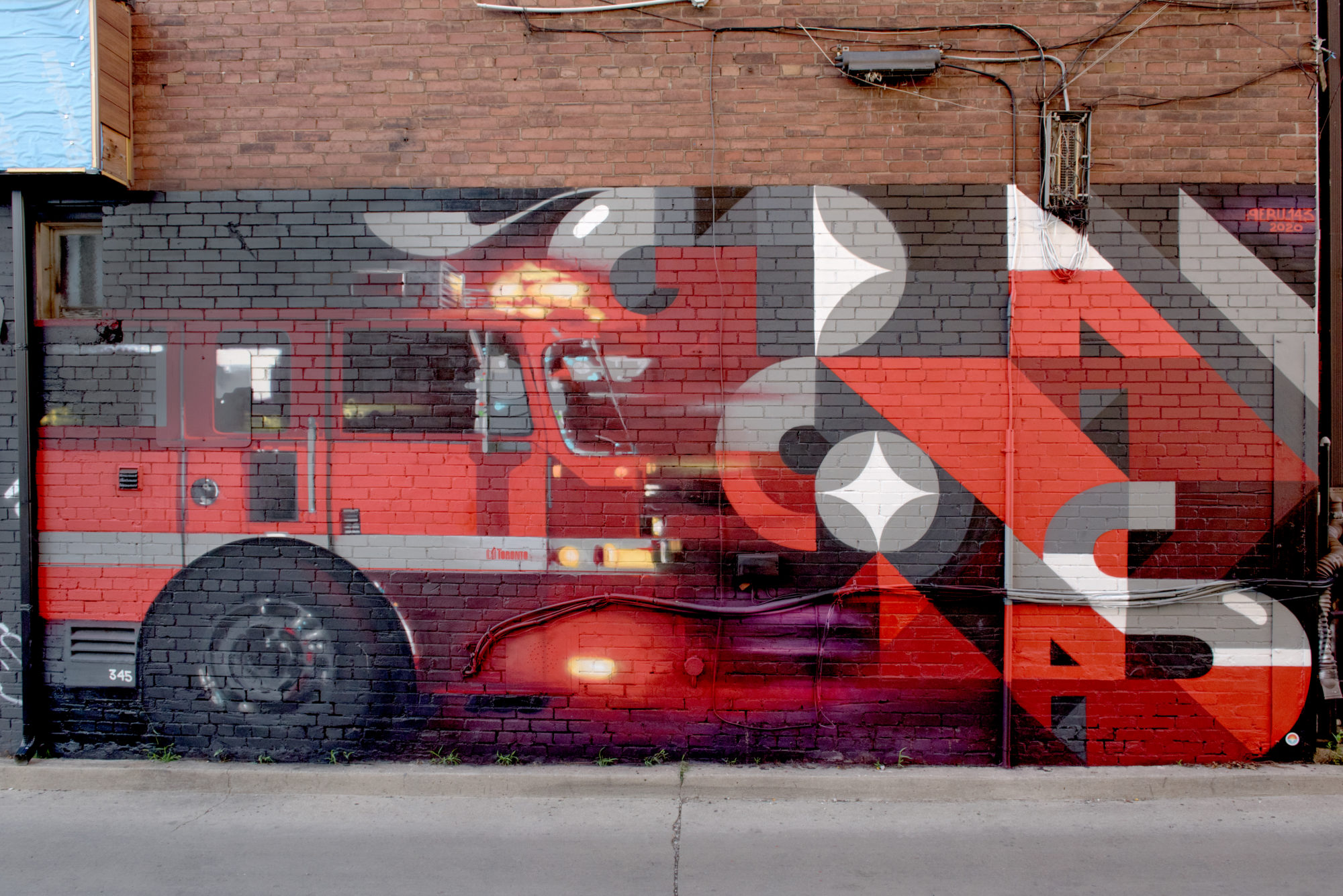 Peru Dyer Jalea’s signature style uses simple geometric shapes, primary colours and clean lines to create puzzle-like patterns with a meditative vibe. This particular mural, which is on the side of Pancho’s Bakery, a Latino-owned business near Jalea’s home, was designed to honour fire fighters. “It’s one of the noblest professions I could think of,” he says. “They’re often unrecognized and underpaid for doing one of the city’s most dangerous jobs.” There’s a station nearby, where Jalea had taken his two young children for a tour earlier this year. “My son is obsessed with fire trucks and my daughter’s favourite colour is red, so I was able to make everybody happy,” he says. For the mural, Jalea used geometric shapes spelling out “gracias,” blended with the image of a fire truck to guide the eye down the wall and around the corner to the bakery. He says the community has been thrilled to see the wall, which had been tagged with unsightly graffiti before, turned into a tribute to first responders. 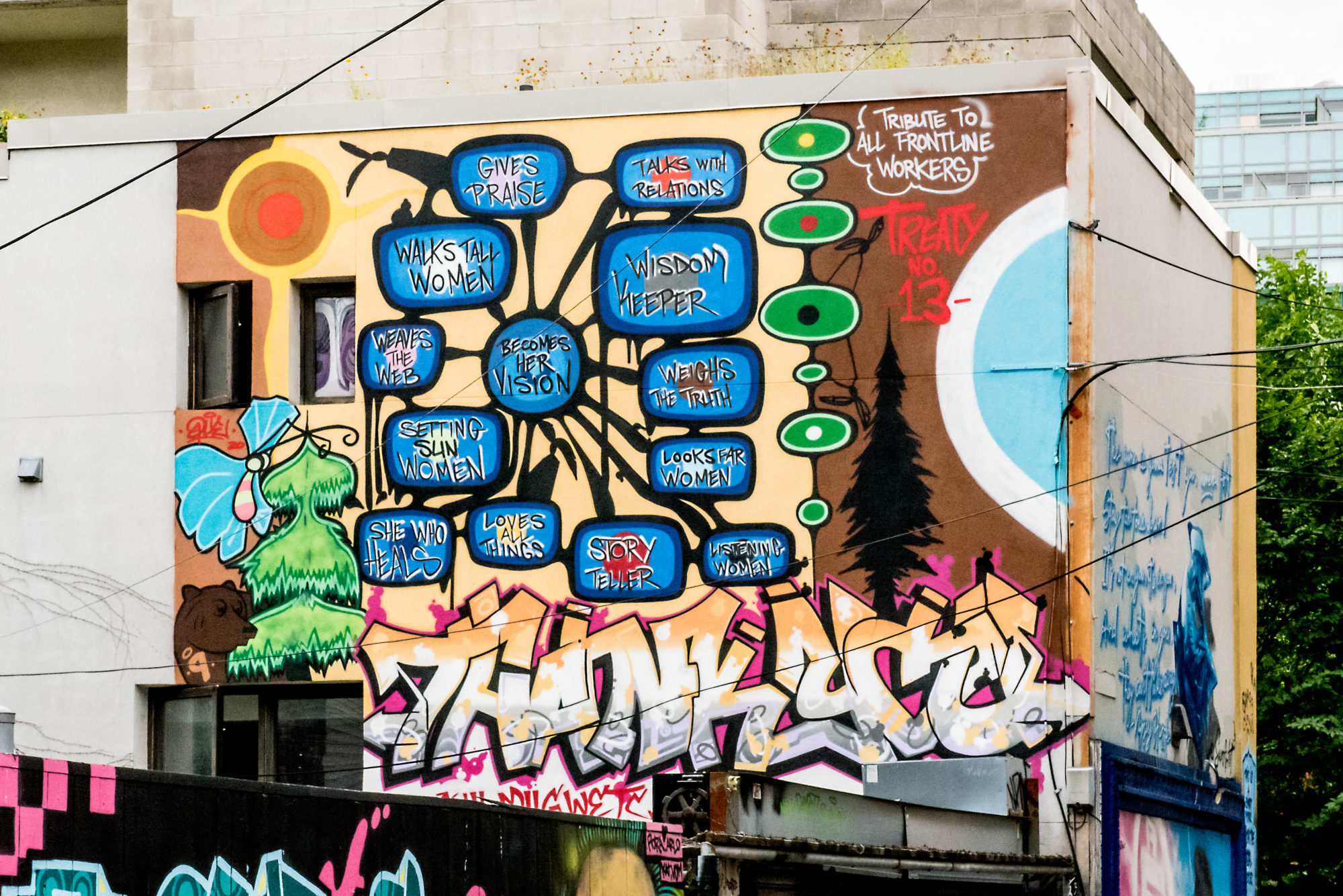 Quentin Commanda (a.k.a. Que Rock) took over a wall that faces east onto Graffiti Alley and wanted to create something to honour front-line workers from his perspective as an Indigenous artist. He’s Nipissing First Nation, and both his parents are traditional healers. He decided to create a visual healing experience, based on the concept of the 13 full moons of the lunar calendar (the calendar his people followed before converting to Western ways). Each blue box represents a different full moon, and inside are messages that pay tribute to a matriarchal society. “There are more female front-line workers than men, so I wanted the piece to not only honour the polarities and dualities of life, but the power of femininity as well,” says Quentin. He also added more layers of Indigenous teachings, like sacred geometry patterns and medicine wheel symbols and chose to spell out “thank you” in graffiti-style lettering at the bottom to pay homage to the mural’s location in Graffiti Alley. 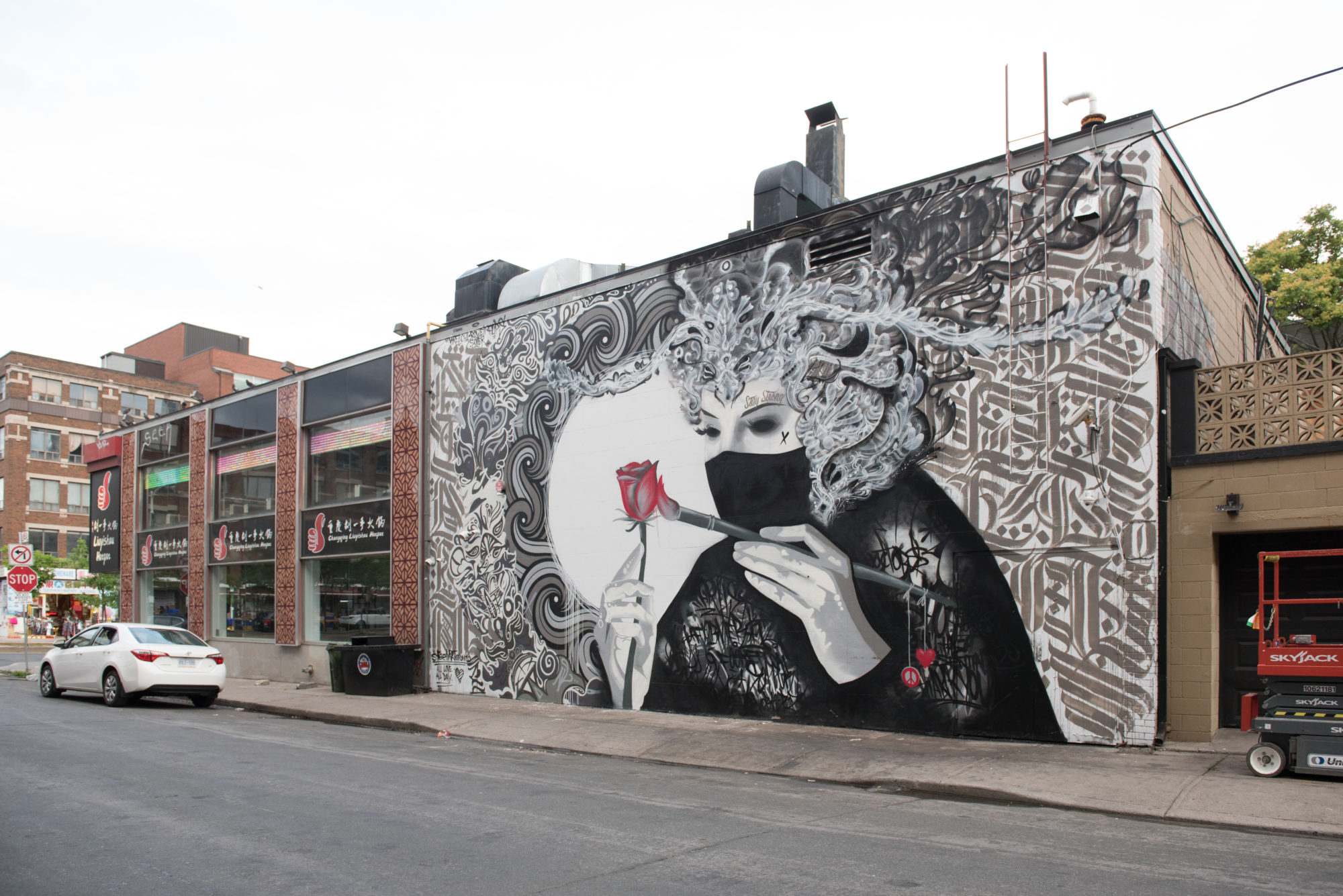 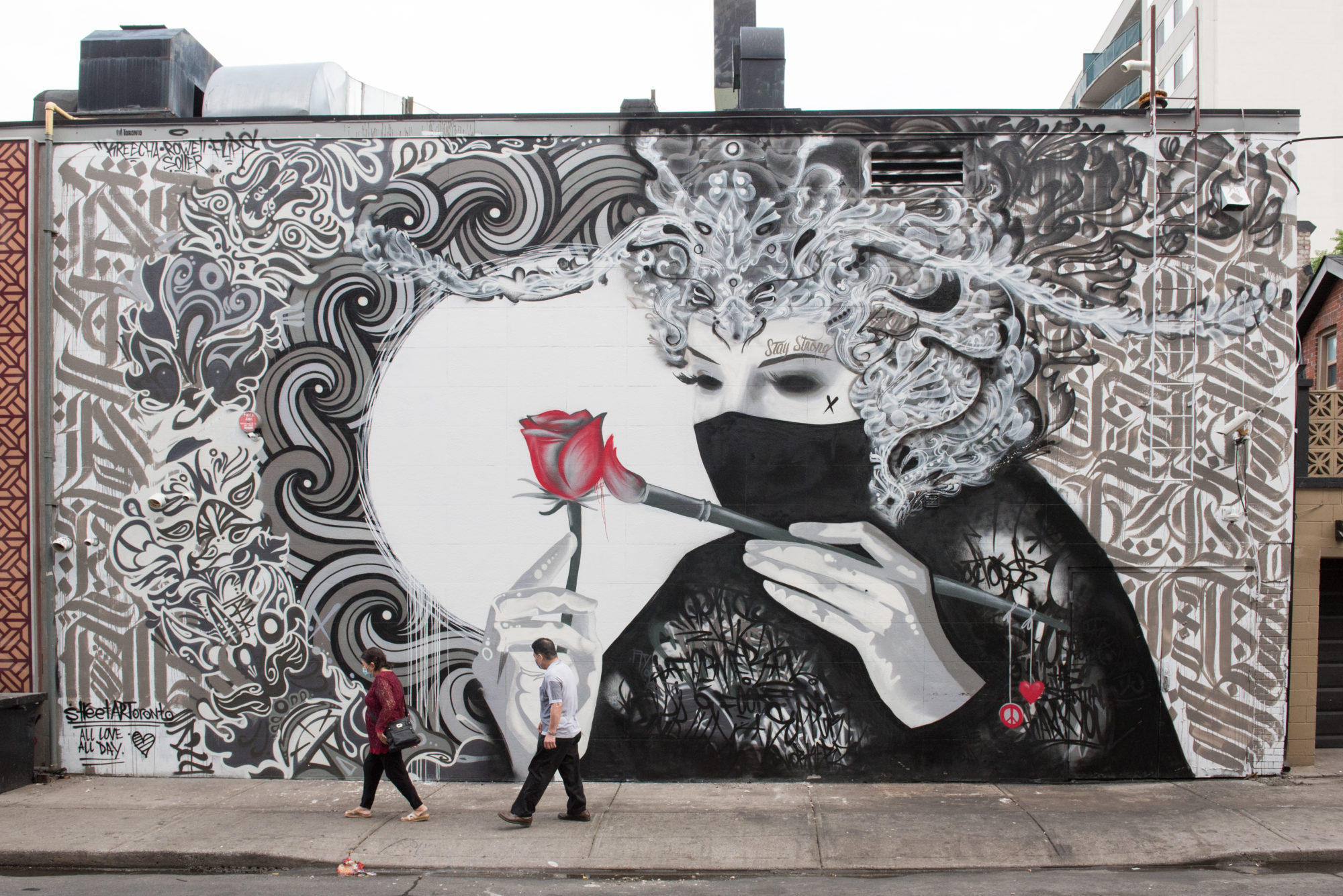 This trio of artists—Rowell Soller, Flips and Kreecha—met in elementary school and regularly collaborate on large-scale projects. Rowell’s work focuses on painting, sculpture and murals, while Flips describes himself as a visual storyteller (his signature swirls can be spotted on graffiti murals around the city) and Kreecha is an Indigenous artist whose work revolves around calligraphy and letter formations. For this piece, they thought about what’s essential during tough times from an artist’s perspective. “When things seem the bleakest and are falling apart, artists paint the colour back into life,” says Flips. They used greyscale to highlight the current global mood, and painted a masked woman, who is meant to represent mother nature or an artist, using a paintbrush to bring a rose back to its former glory. Creating the mural took about five days: first, Flips made the background with his swirling circles, then they painted the face, Kreecha inscribed a script on the woman’s body (based on the phrase “art is essential”) and Rowell finished the piece off with his signature ethereal “spirit strokes” as the woman’s hair. 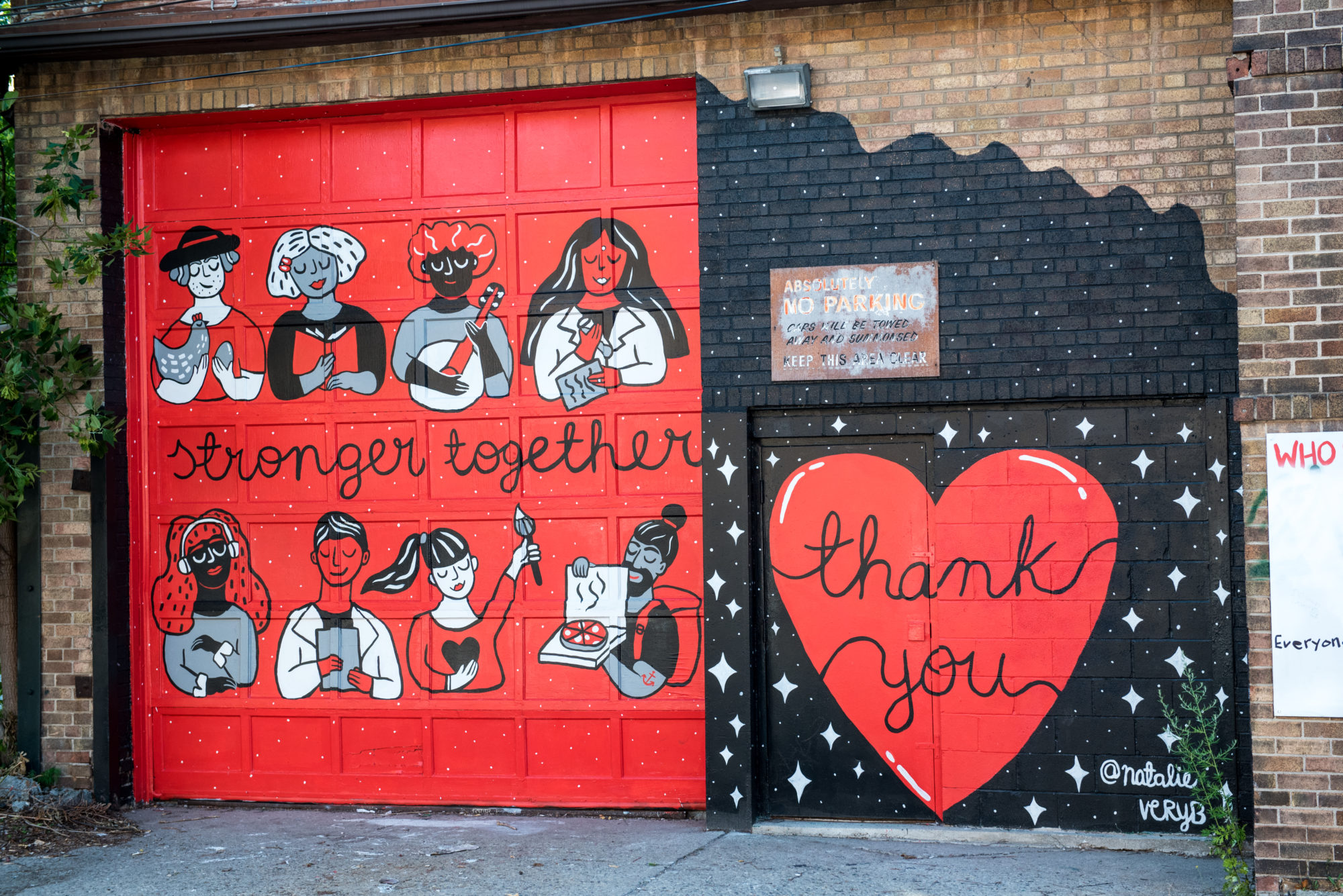 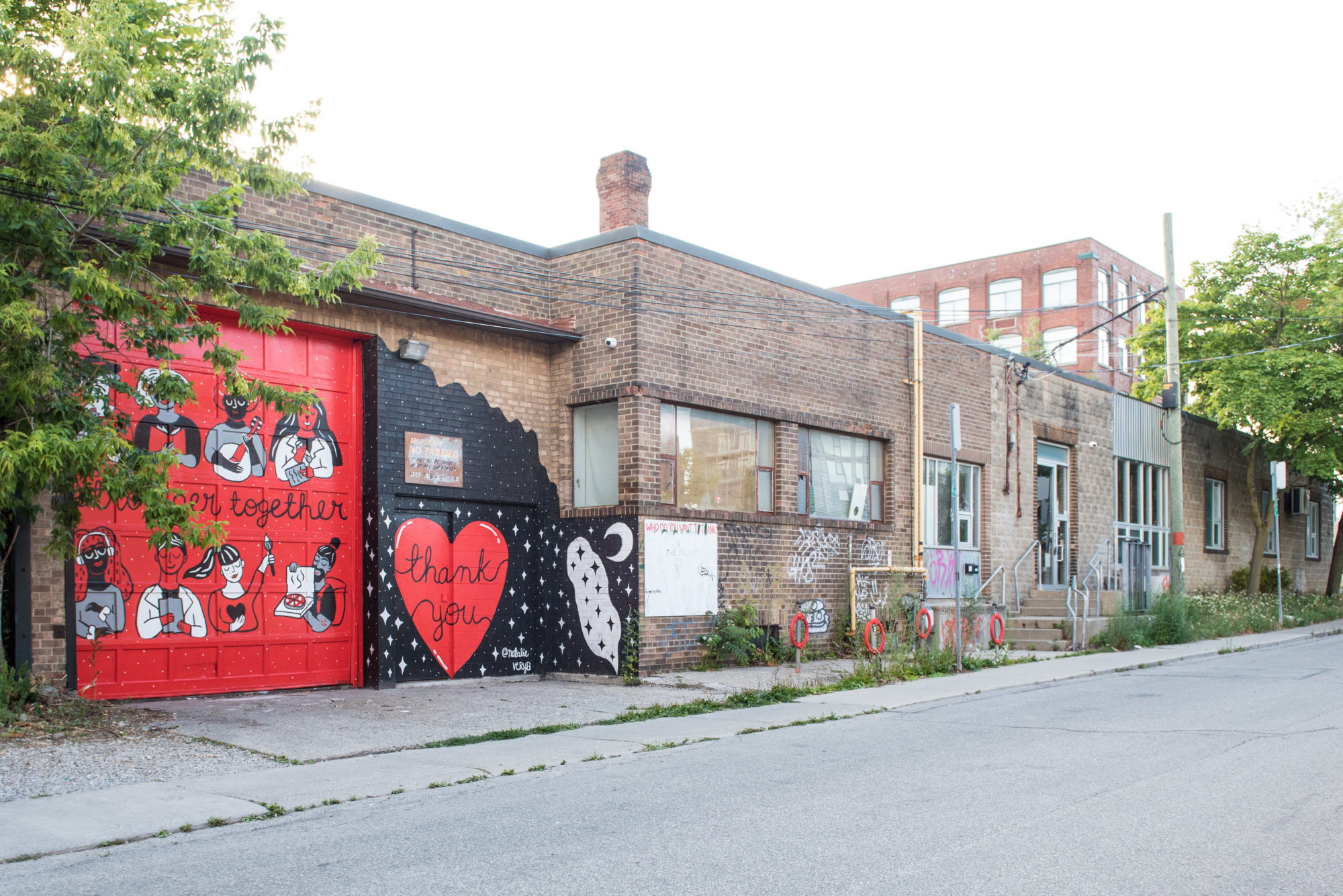 Illustrator, muralist and teacher Natalie Very B. loves using her favourite colours, the colours of both the Canadian and Polish flags, in her large-scale pieces. “It’s about my cultural background, but they’re also really bold colours, and I love messages that can be seen from afar and make a statement,” she says. For her StreetARToronto project, she wanted to celebrate some of the essential workers who don’t get recognized as much as they should. She painted “thank you” in a giant heart, and added portraits of eight groups of front-line workers represented by a character: there’s a farmer, librarian, musician, lab staff, telehealth worker, doctor, visual artist and food delivery person—all of them exuding strength, courage and warmth. She also added the phrase “stronger together,” a common slogan in her work that celebrates diversity. 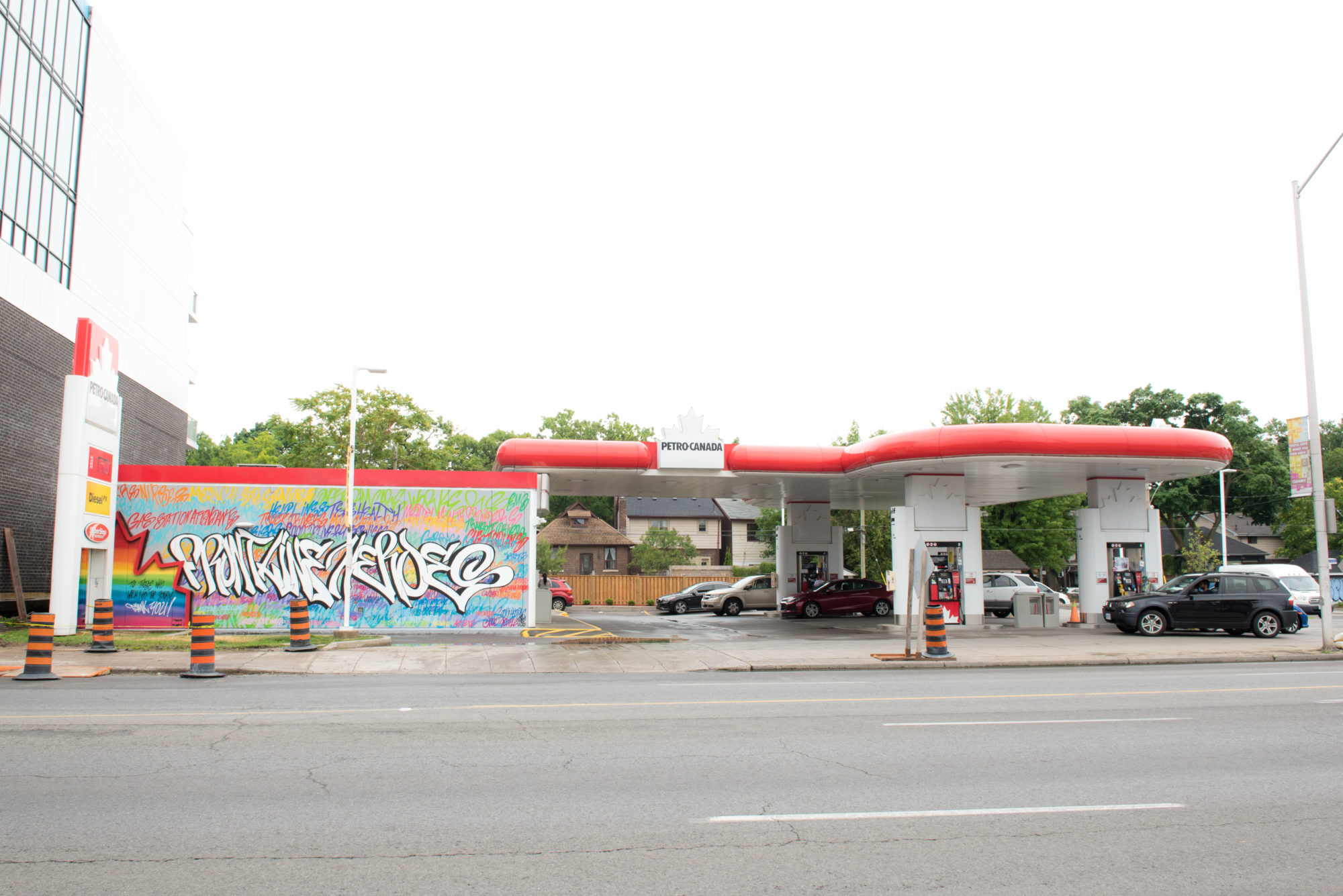 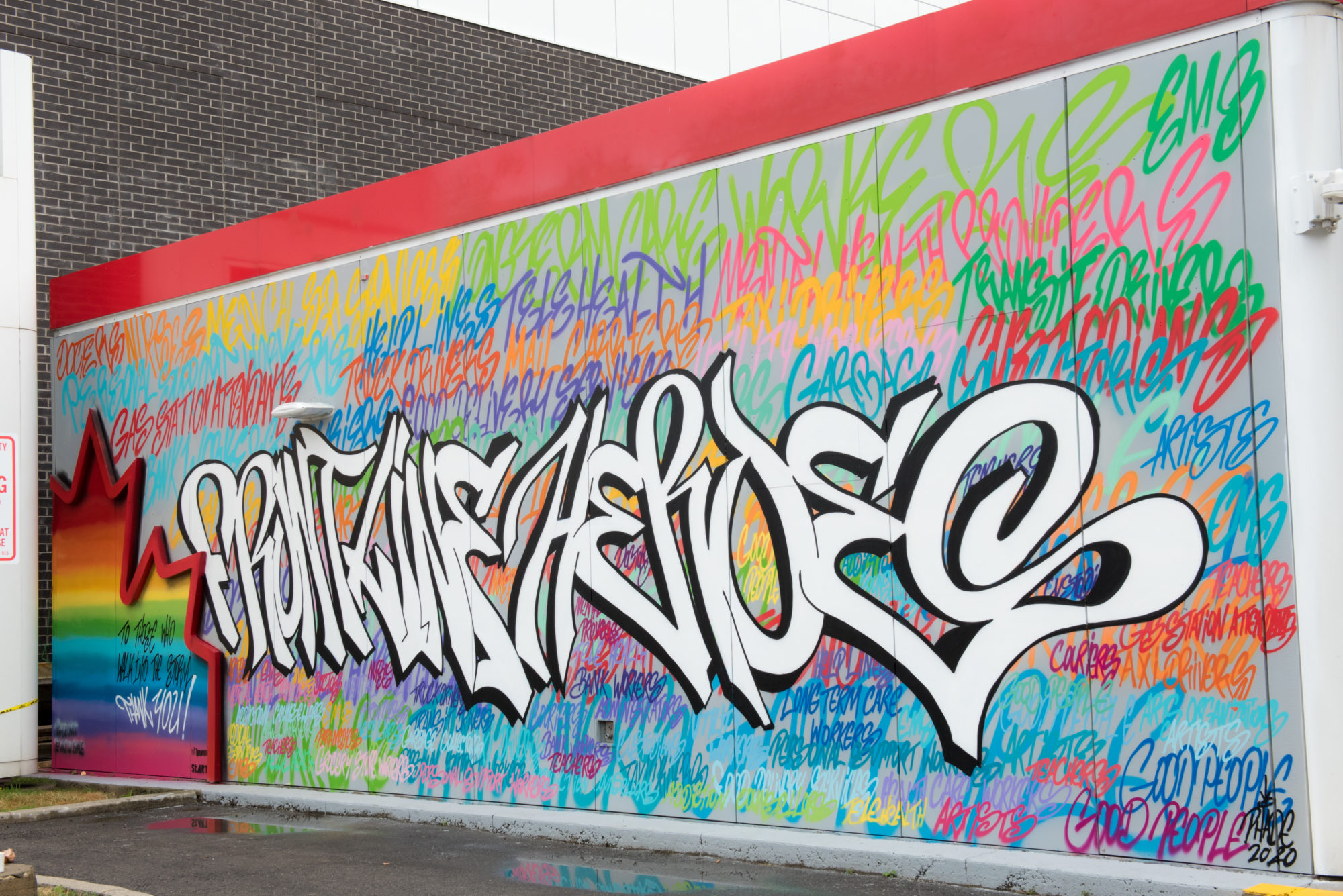 Jessey Pacho has been a professional graffiti artist since 2007, and has since incorporated other artistic elements like portraiture and landscape into his murals. He’s been working with Petro-Canada since 2018, and encouraged them to participate in this StreetARToronto project—they chose to reimagine the side of a gas station near Danforth and Woodbine. Jessey wanted to stick to his roots of graffiti, honouring front-line workers while also paying tribute to the form of artwork that he says has paved the way for much of the public pieces now popping up in the city. He came up with an extensive list of front-line and essential workers, and created a design involving layered lettering, with worker titles sitting on top. Services and personnel from four societal pillars—health care, transport, community service and the arts—are repeated across the mural (the repetition shows how there’s strength in numbers). With a closer look, you can spot jobs like long-term care workers, bank workers, teachers, garbage collectors and transit drivers. 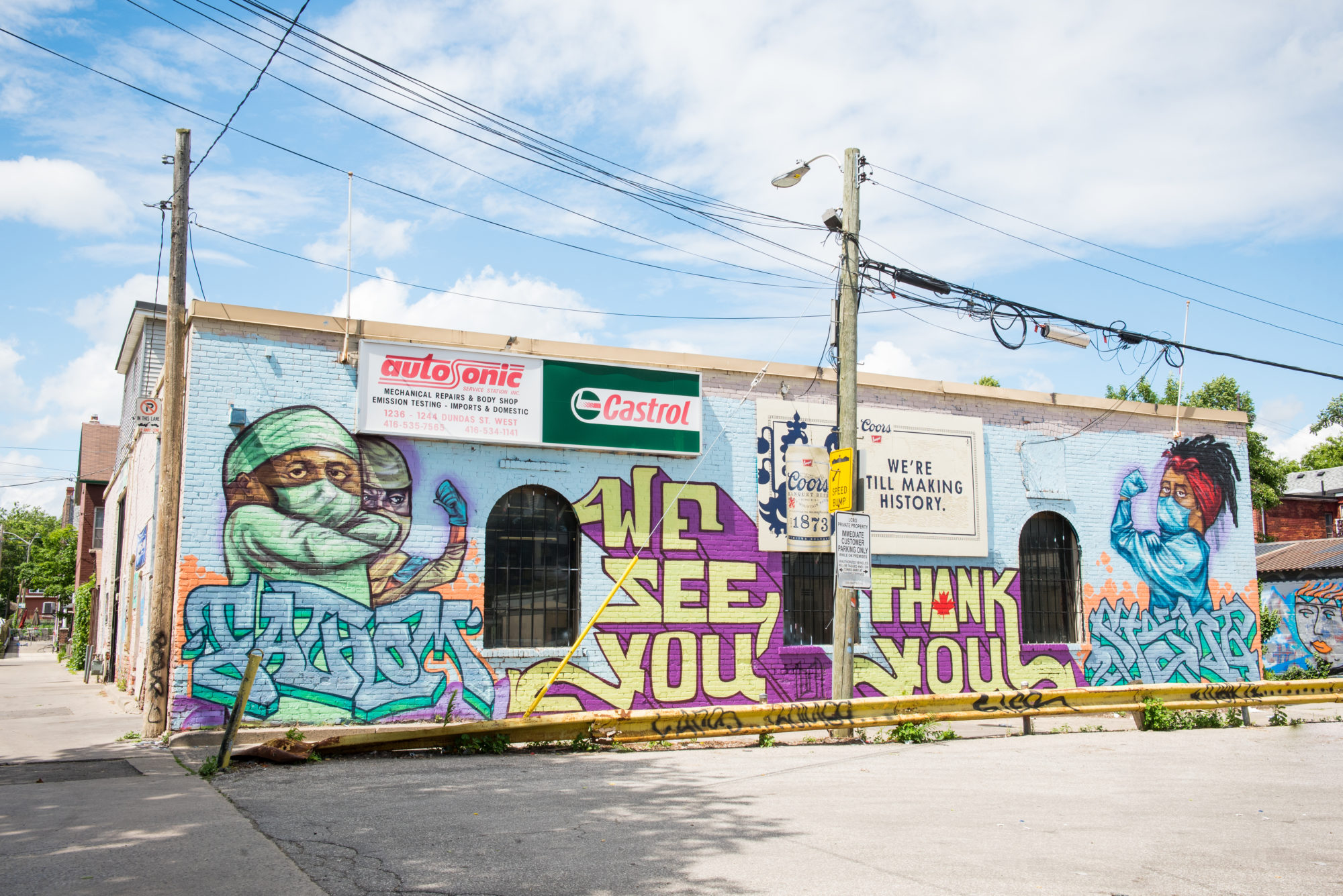 Elicser Elliott has spent the last decade entrenched in the global aerosol arts community, and, in addition to Toronto (where he was recently featured at the ROM’s Institute for Contemporary Culture), his work is also featured in South America and South Africa. He’s known for creating character-based graffiti, and capturing the essence of his subjects. For this project, he featured a play on Rosie the Riveter, the “We can do it” cultural icon who represented the women who worked in factories and shipyards during World War Two. In this case, the image pays homage to essential workers—particularly those of colour—who have been selflessly going to work to serve their community. “I was thinking of how, when things get really bad, it’s always the women who come in and and hold it down,” he says. “And Black people especially have been disproportionately at the front lines of this, still having to work really hard and put themselves at risk.” Underneath the portraits is graffiti lettering from his colleague Sight One. The pinkish force field bubbling up behind is meant to represent the threat of Covid-19. 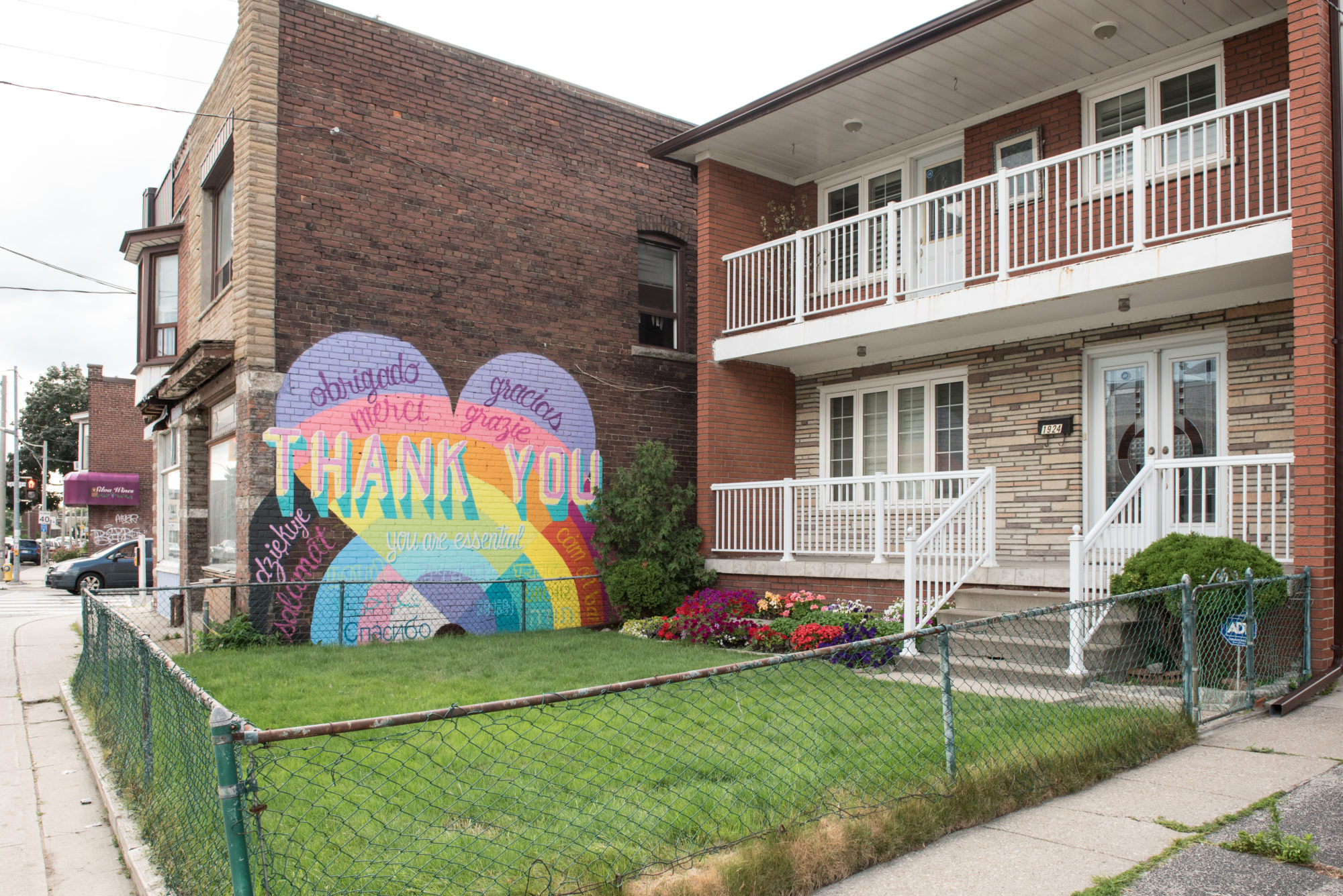 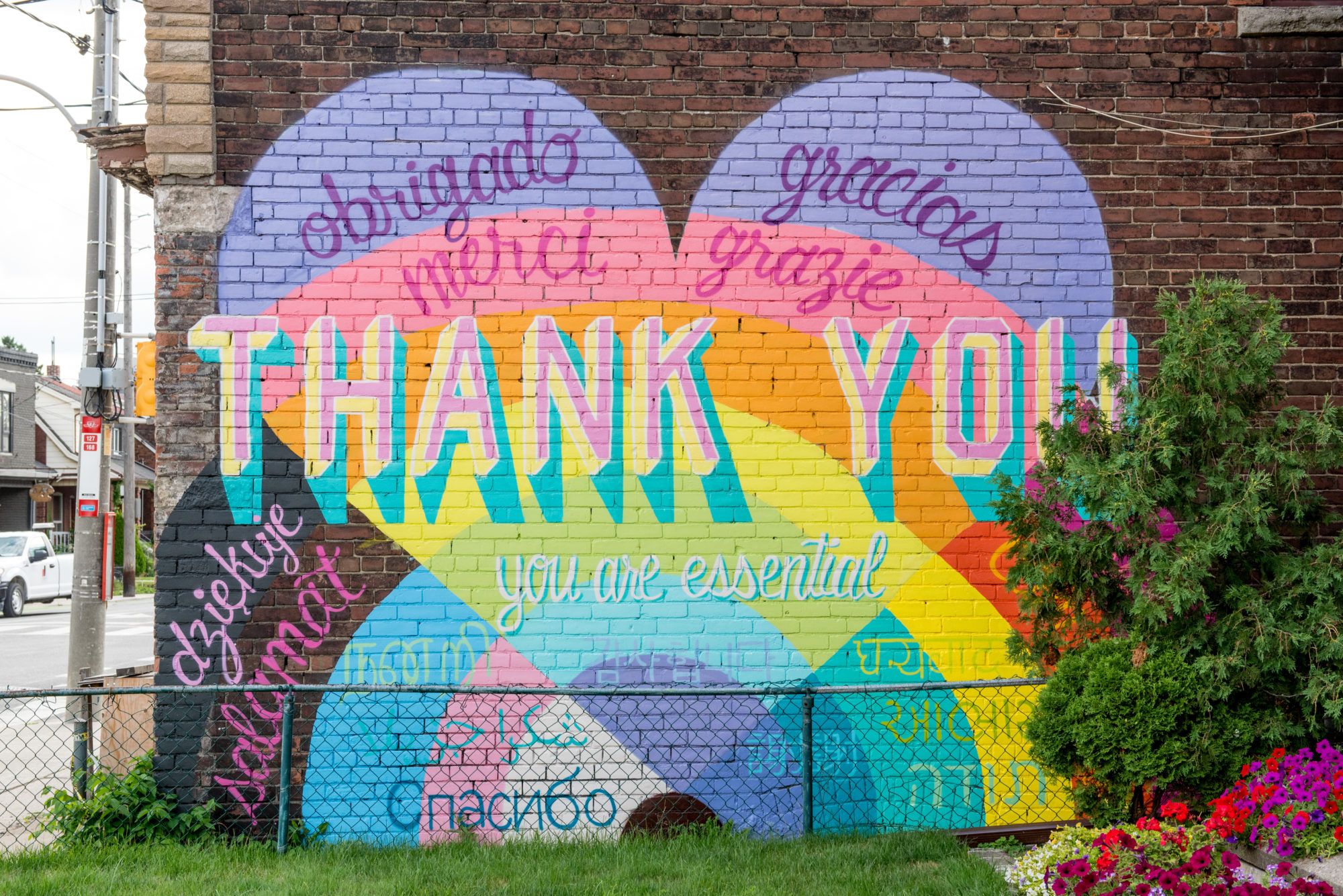 Toronto visual artist, curator and self-described eternal optimist Bareket Kezwer makes murals designed to spark joy. She wants her work to help people live in the moment and foster new social interactions, and she founded an annual street art party in 2017 called Womxn Paint, which has produced 44 murals celebrating the strength and diversity of female-identifying artists. This particular mural, using her signature bright colours and bold patterns, is meant to cultivate gratitude and honour the roles everyone is playing during the pandemic, especially the front-line workers who are risking their safety. She used a multilingual design to celebrate the diversity that is integral to Toronto’s strength as a city.