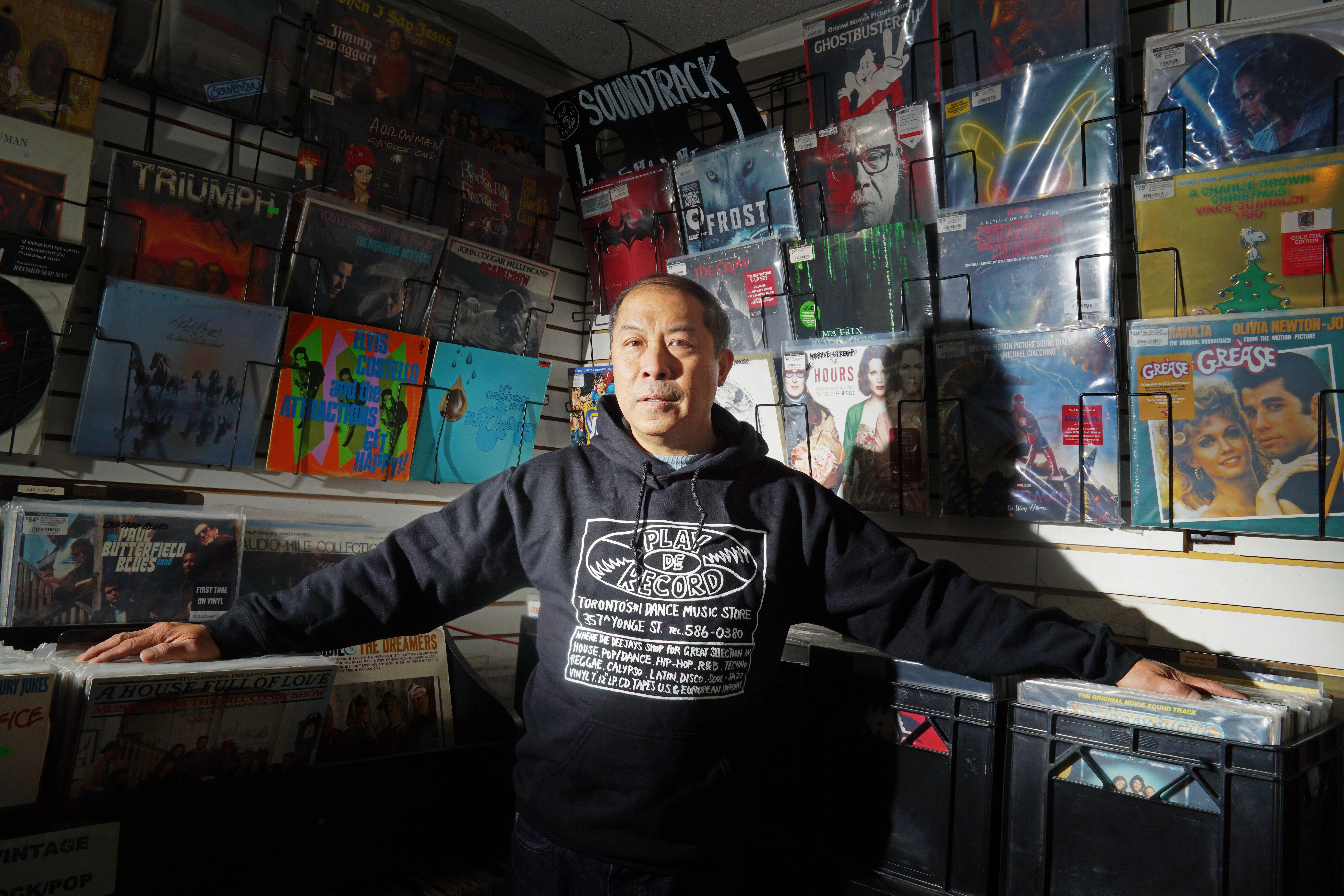 During the 1990s, Play De Record was an essential stop for anyone closely following dance music and hip hop, either locally or internationally. Talent like local DJ crew Peter, Tyrone and Shams would crowd the record store to talk shop—what was hot, what was new, what they needed to have before anyone else. It became a hub for crate diggers of all stripes, who hung out for hours on drop days, hunting through the store’s one-of-a-kind selection. If you wanted to be the best, find the best and spin the best, you went to Play De Record. A documentary celebrating the store’s legacy, called Drop the Needle, premiered at Hot Docs’ Ted Rogers Cinema last month. Here, Play De Record’s owner and founder, Eugene Tam, talks about how his passion for local music and his family-first approach helped shape the iconic shop’s enduring success and influence.

—As told to Michael Rancic

People always tell me, “Play De Record is an institution,” but I never really took time to reflect on that until the making of this documentary. At the premiere of Drop the Needle, a lot of the guys who used to come to the store—the ones who showed up to be a part of the excitement when new music arrived every Thursday—told me they got really emotional watching it. They were all teenagers in the ’90s. Some of them started coming to the shop when they were as young as 12 or 13. One guy told me he used to spend all of his money at the shop, and one time he was down to pennies. Apparently, I asked him if he had enough money to get home and for food, and when he said he had food at home but nothing for the bus, I gave him the record and told him to keep his change for his ride. He said he’d always remembered that, but somehow, with everything going on at the story every day, I’d forgotten. It’s nice to be reminded of the difference you’ve made.

I got this communal way of operating from my family. In Trinidad, where I was born and raised, my dad worked for one of my uncles in a grocery store. And then my dad became part owner and eventually took over. Growing up there, I was always involved with the family business. When my dad was working, my brother and I would go to the store after school. We were always running around in there. The family would also go there on Sundays, when it was closed, to help clean up and pack stuff, and then after that we’d all go to the pool or the beach. It was just one of our family rituals.

It was the same thing at Play De Record. Anything I do, my mom and dad want to be involved. They want to help and do their part to make sure everything is working out. If it weren’t for my parents, I wouldn’t even have this store. We moved to Canada in 1981, and my dad eventually owned a building on Yonge. The front was a drugstore, and the back was empty for two years. I was 28 by then, and I pitched the idea of a music store to my parents. I loved music; my brother and I collected records from a very early age. Back in Trinidad, we always used to get the latest music, and I liked to be the first one to talk to my friends about it. That stayed with me when I came here. And that stretch of Yonge and Dundas was already a popular spot for record collectors thanks to Sam the Record Man. It was a good opportunity. So they said, “Okay, let’s try it out.” Then it just picked up from there. We’ve never stopped. And all the regulars know my mom and dad now. They’ve met my siblings and my wife too.

A few years into the store’s existence, I realized I needed some help because I didn’t know all the different types of music, like house and techno, which were becoming popular. I tried to hire staff that were really passionate about music, loyal and young. The youth really give you energy with their passion; it’s contagious. Like Peter, Tyrone and Shams—man, those guys were hungry. They worked for the store and were a DJ crew. They always had to get the latest music. So, every Thursday, I would drive down to Buffalo at six o’clock in the morning, pick up all of the latest records from the US and then have to rush back because, if you got new records to the store early, then all the DJs would come to your store first. It was faster and more profitable to do that than to rely on shipping. Over the years, the staff became like family. I still talk to all of them. You have to love music to work here, and that drive brought us all closer together. The ones who don’t work here anymore still come and check on me. I know their families, their kids. I even went to some of their weddings.

I always knew I didn’t care much for commercial stuff, but I liked finding the newest R&B, reggae, soca or funk and spreading the word about it. I soon realized that, in Toronto, and in Canada in general, we have a lot of talent. But they didn’t have many avenues. Back then, bigger stores wouldn’t carry much Black music, only the popular stuff. They wanted to sell a hundred or a thousand units of something, not like ten copies. Because mine was just a small mom-and-pop store, I could put whatever I wanted on the shelves. We were one of the only places you could get Mastermind’s mixtapes, and they always sold well. The artists would tell their friends about it and come by to see it on display. You couldn’t do that in a big store unless you happened to make it big. And not a lot of people wanted to buy Canadian music in the ’90s. They wouldn’t give it a chance; they wanted music from the US and the UK. But I welcomed all of the local talent. I didn’t know if they were good or not, and I didn’t really care. It wasn’t for me to say. I would just put out their music and see what happened. I’d give everyone a chance. After a while, people started to warm up to it. And certain artists, like Saukrates and k-os, really stood out.

In 1993, we started a label to help some of those artists and called it Steppin’ Bigga. We put out Saukrates’s first 12-inch. They didn’t have their own studio, and they didn’t know how to distribute their own music. It’s not like it is now, when you can buy a laptop and away you go. You needed a lot more capital and infrastructure to distribute music, and I was fortunate to have the means to do that. At first, I was paying for them to have studio time across the city, but it was costing a lot of money, so we built a studio in the basement of the shop. Saukrates and Kardinal Offishall recorded there. Alex Greggs, a recording engineer and songwriter, managed a lot of it. He went on to work with NSYNC, Keshia Chanté and Janet Jackson.

That lasted for a while, until Napster, one of the earliest music-sharing apps, arrived in the early 2000s. And so we closed the label. Things are changing constantly; you have to adapt. When music sales dropped, I started selling DJ equipment as well. Then I came up with the idea for a DJ school, courses to help people learn the fundamentals of deejaying. There’s always something new going on with the store. It’s stressful but very rewarding.

These days, vinyl is popular again, and I’m selling it to walk-ins as well as people who purchase it online through our site and through other websites like Discogs. Looking back, a lot of the work that we did feels like laying a foundation, especially locally. Nobody saw the benefit, at the time, of selling 50 records of a local artist compared with thousands of a big name. But now some of those local artists are big names. And those that aren’t still got the chance to be taken seriously and put out some great music.