Ontario Place was once an urban summer getaway. The newly transformed park kicks off its second act, however, with a chillier attraction: the Winter Light Exhibition, part of the Winter at Ontario Place festival, which runs from December 8 to March 18. Throughout the season, Ontario Place’s west island will be home to 12 site-specific light art installations by Ontario artists that reflect what winter means on the waterfront. Here, a closer look at the works. 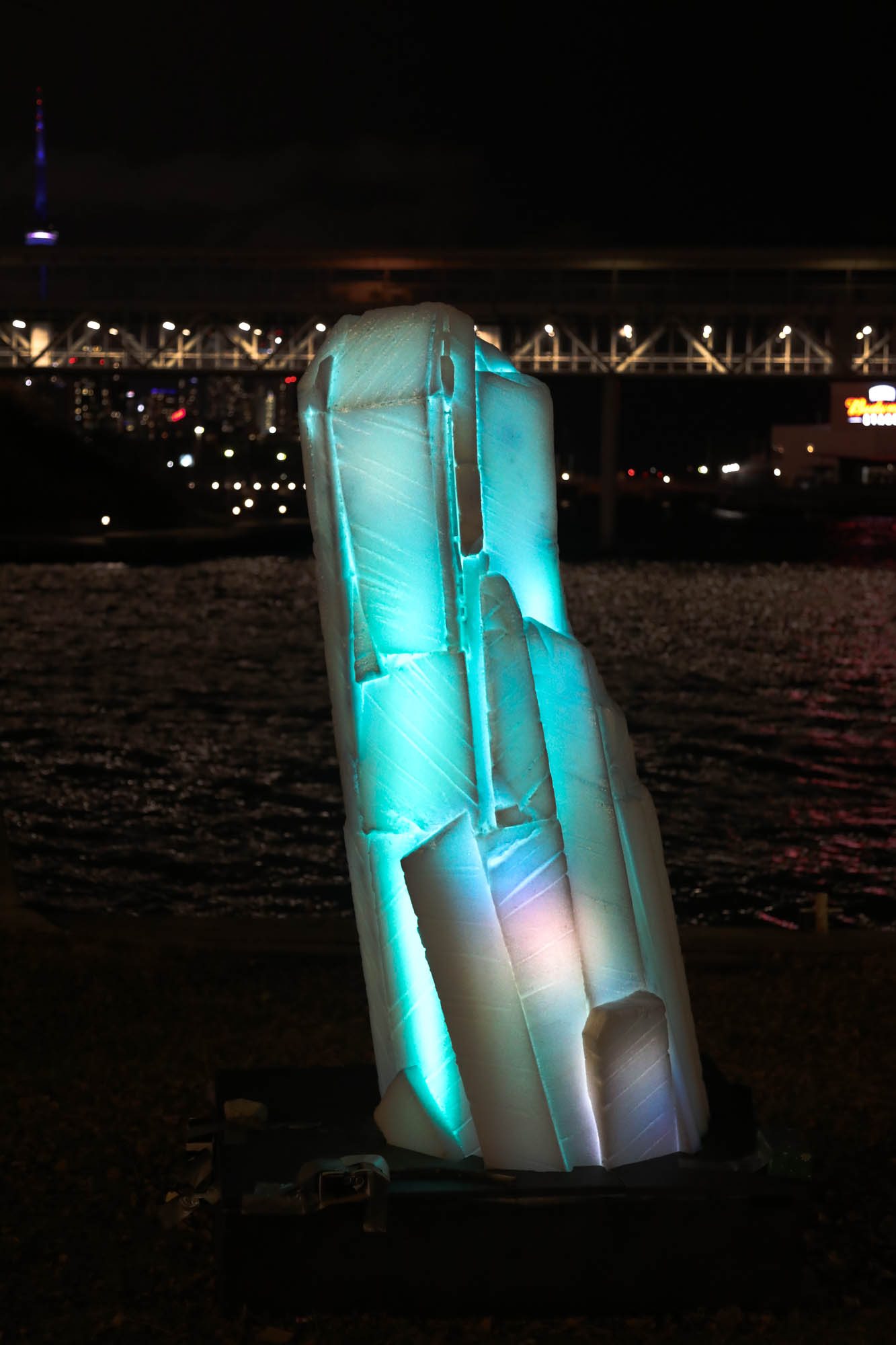 Shard by Nuff and “Nupanap” (a.k.a Sergio L. Sanchez)

The first piece visitors see as they cross the bridge to Ontario Place is this frozen-looking crystal and its aura of light. The artist intends for them to walk around the crystal and observe how light passes through it, and watch how the sun, wind and other sights and sound alter its reflective glow. 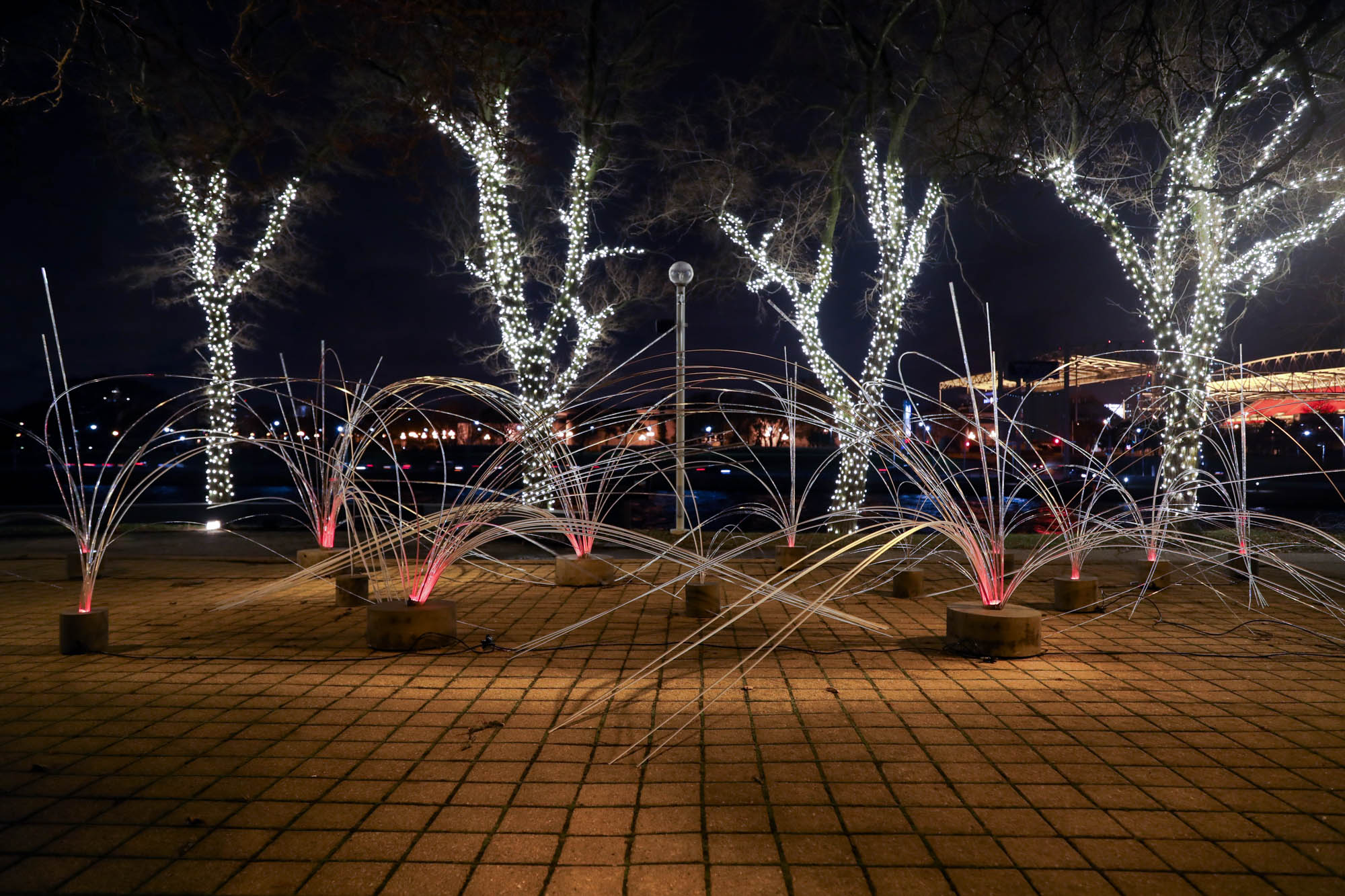 These sculptures represent the sun: the bases are meant to be sunspots, while the acrylic and metal wires, swaying vigorously in the wind, portray the sun’s magnetic fields. 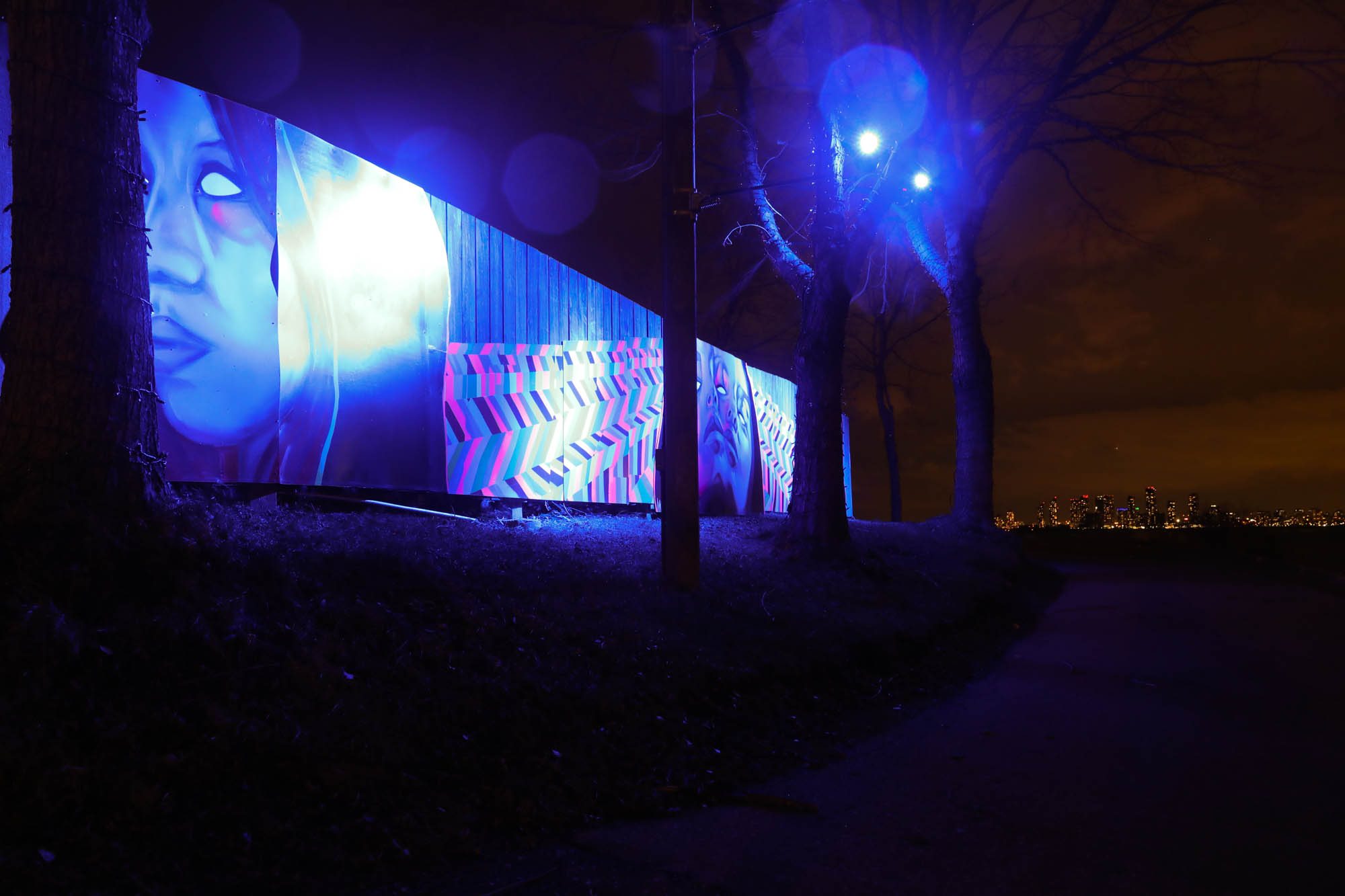 This mural is the exhibition’s largest, visible to drivers across the water. Local street artist Kizmet Gabriel prefers to let viewers decide how to interpret his installation, but to him, the piece is a glimpse into a psychedelic future, where cybernetic ethereal beings exist in a fluctuating electric realm. 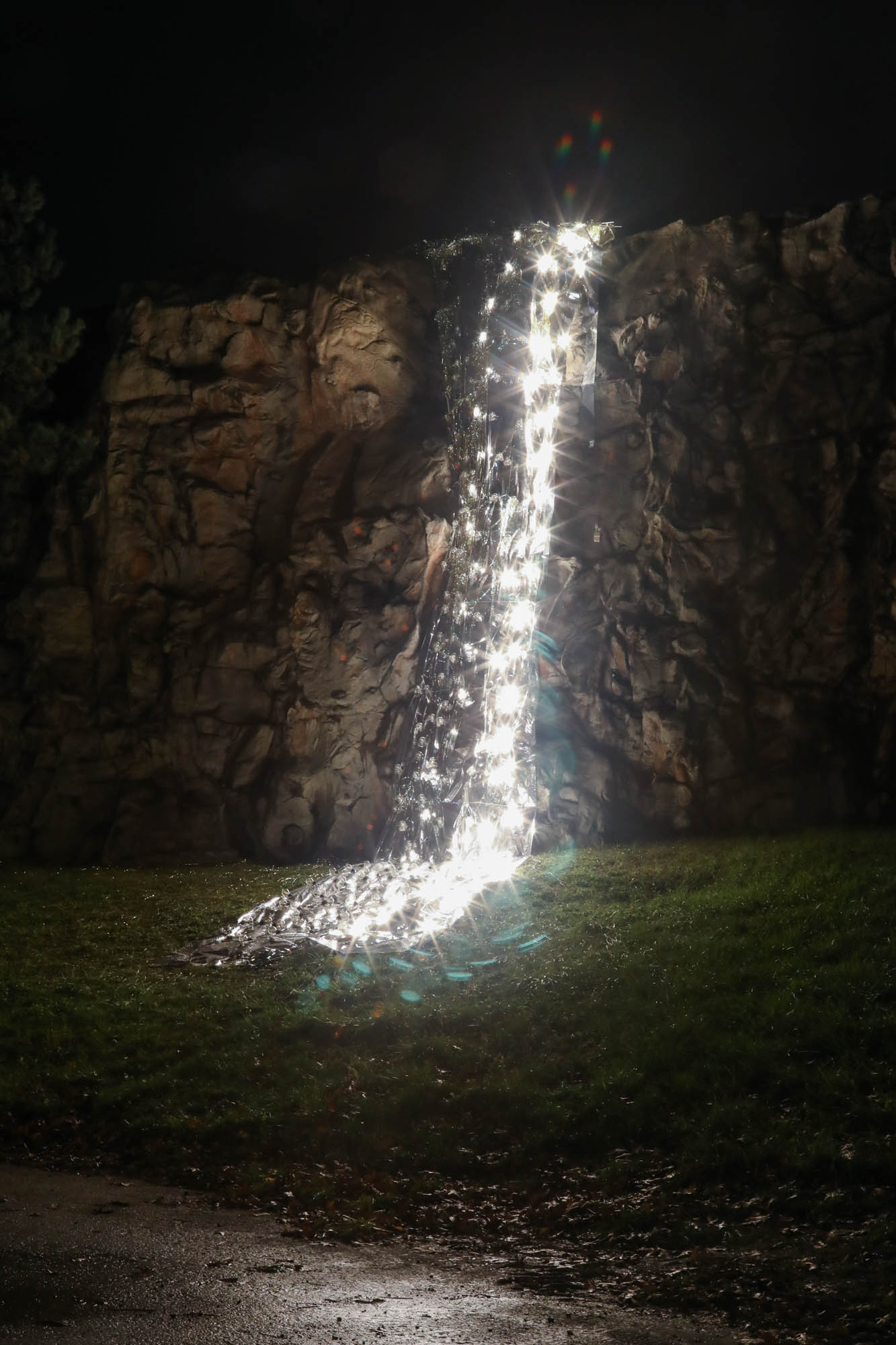 A waterfall of light

Shine and Shimmer by LeuWebb Projects

Christine Leu and Alan Webb’s work reflects and refracts light using flexible surfaces that move and crinkle with the winds of the waterfront. They wanted to blend artificial creations—the illuminated waterfall, the manmade mountain—with natural elements, like the wind that gives the installation life. 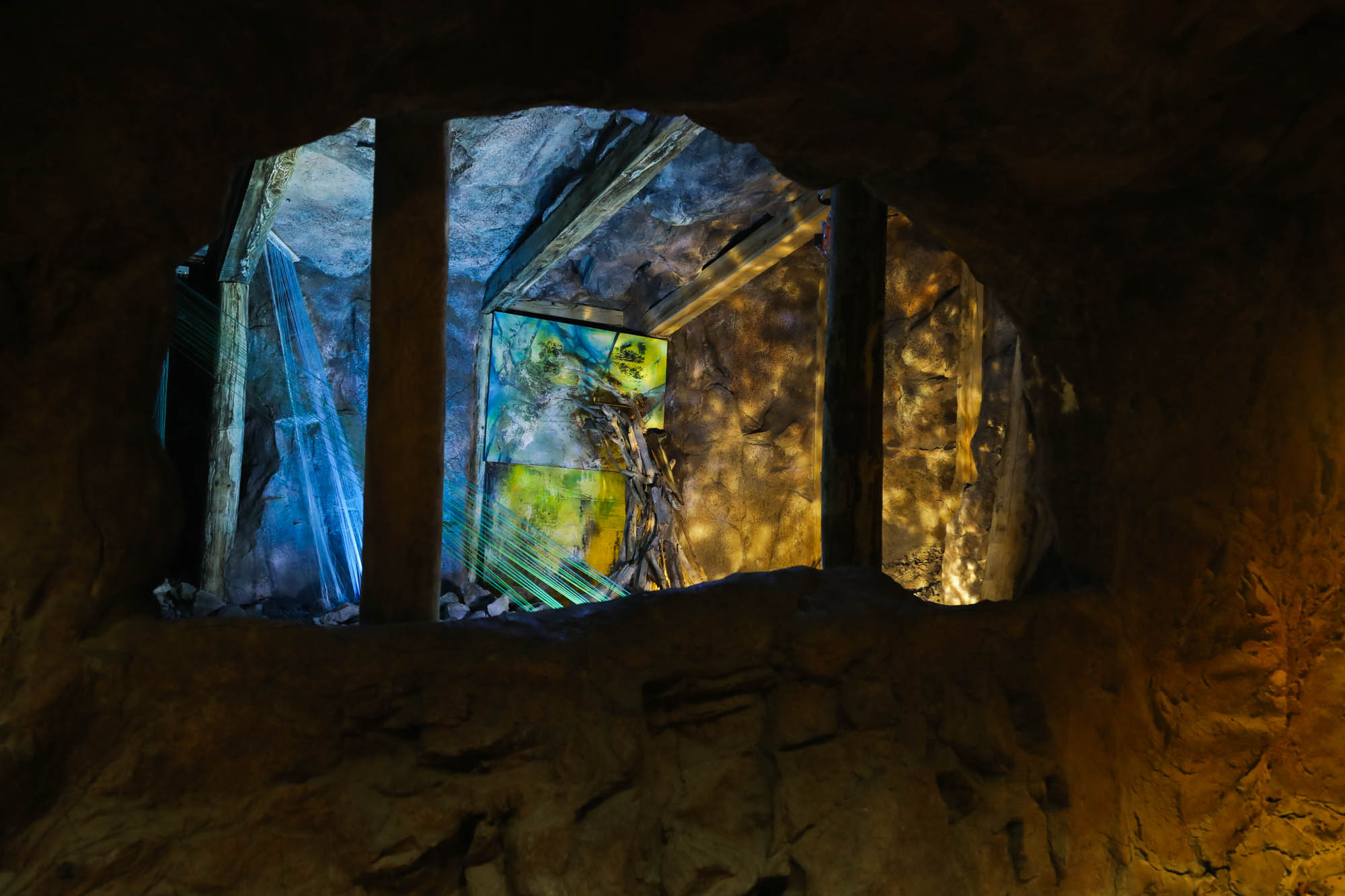 This mixed-media installation is housed in Ontario Place’s former log-ride tunnel. The artist used string, canvas and driftwood to recreate the winter light and florescent glow seen in rock caves in Ontario’s wilderness. 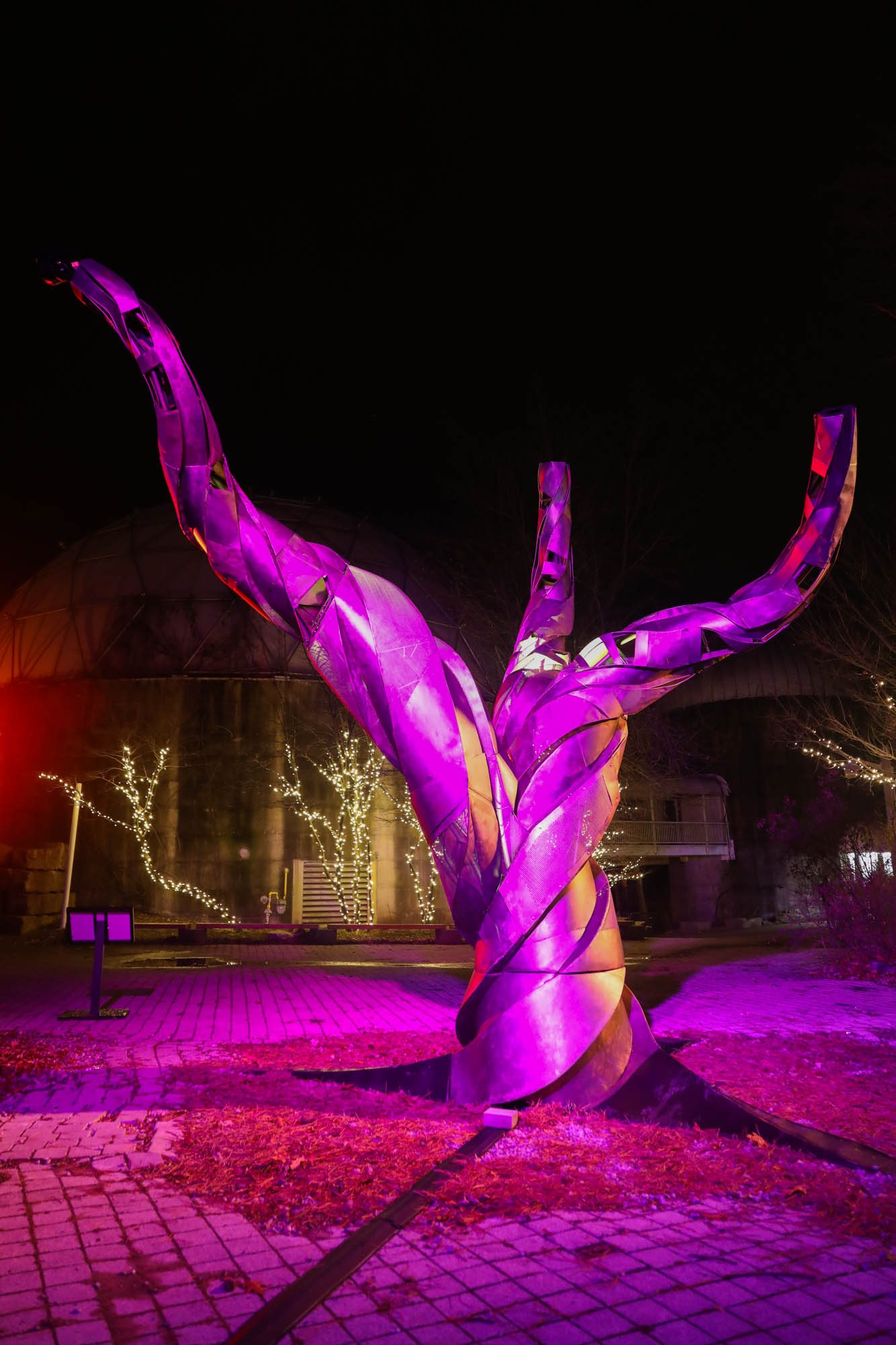 Revellers who attended the first Toronto Light Festival (or Burning Man 2016) might recognize this piece by sculpture artist Ryan Longo, a tree meant to represent the relationship between nature and technology.

An icy homage to the Ontario Place silos

This 12-foot-tall installation mimics the iconic Ontario Place silos. Later in the season, the artist intends for rain, snow and ice to blow into the cage and form real icicles on the hanging crystalline shards. 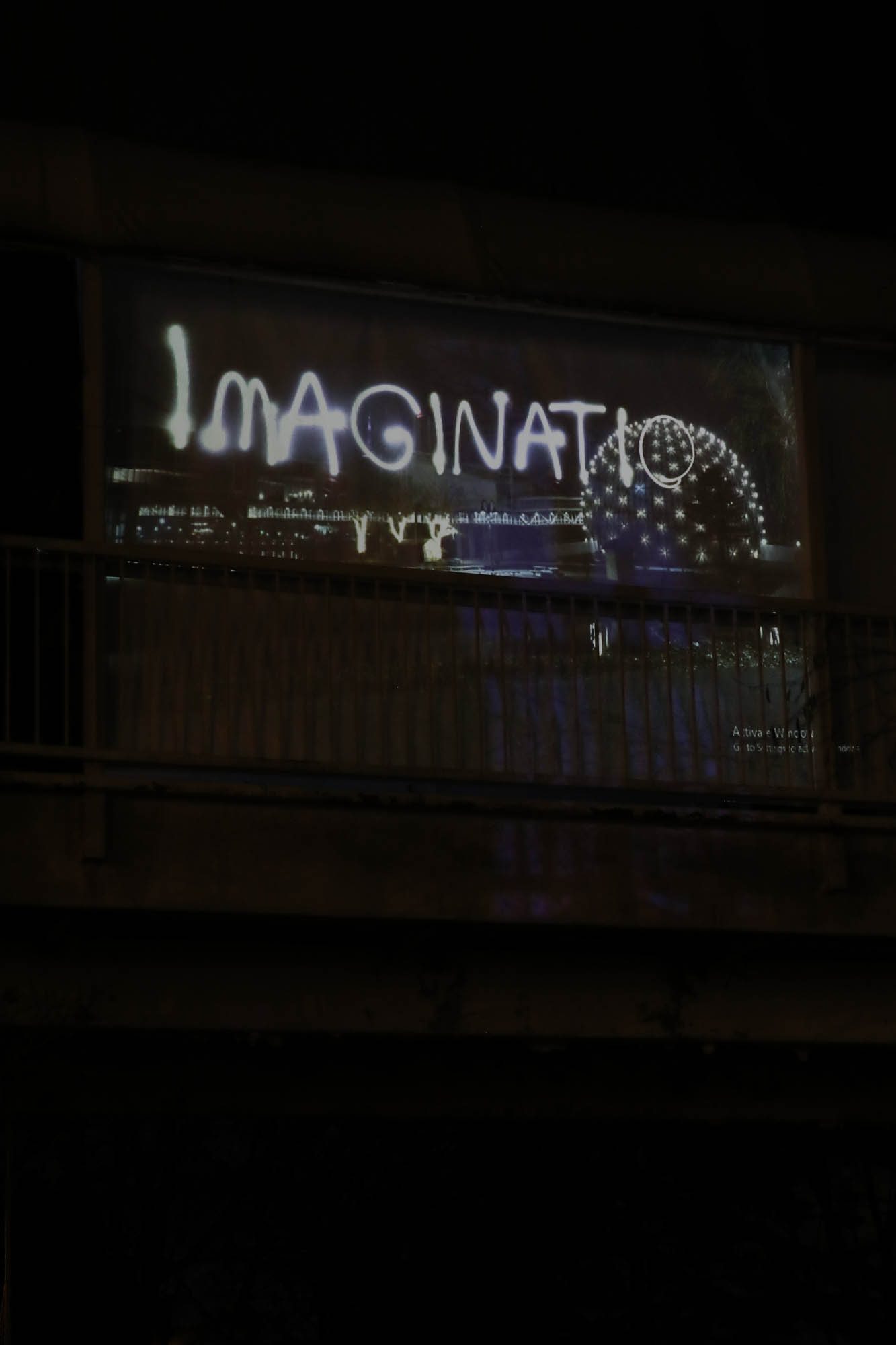 Bridge of Imagination by Phil Sutherland and Reanna Niceforo

Throughout the winter, the artists will update and manipulate this digital projection to track the course of the season, changing the scene to reflect the temperature and snowfall. 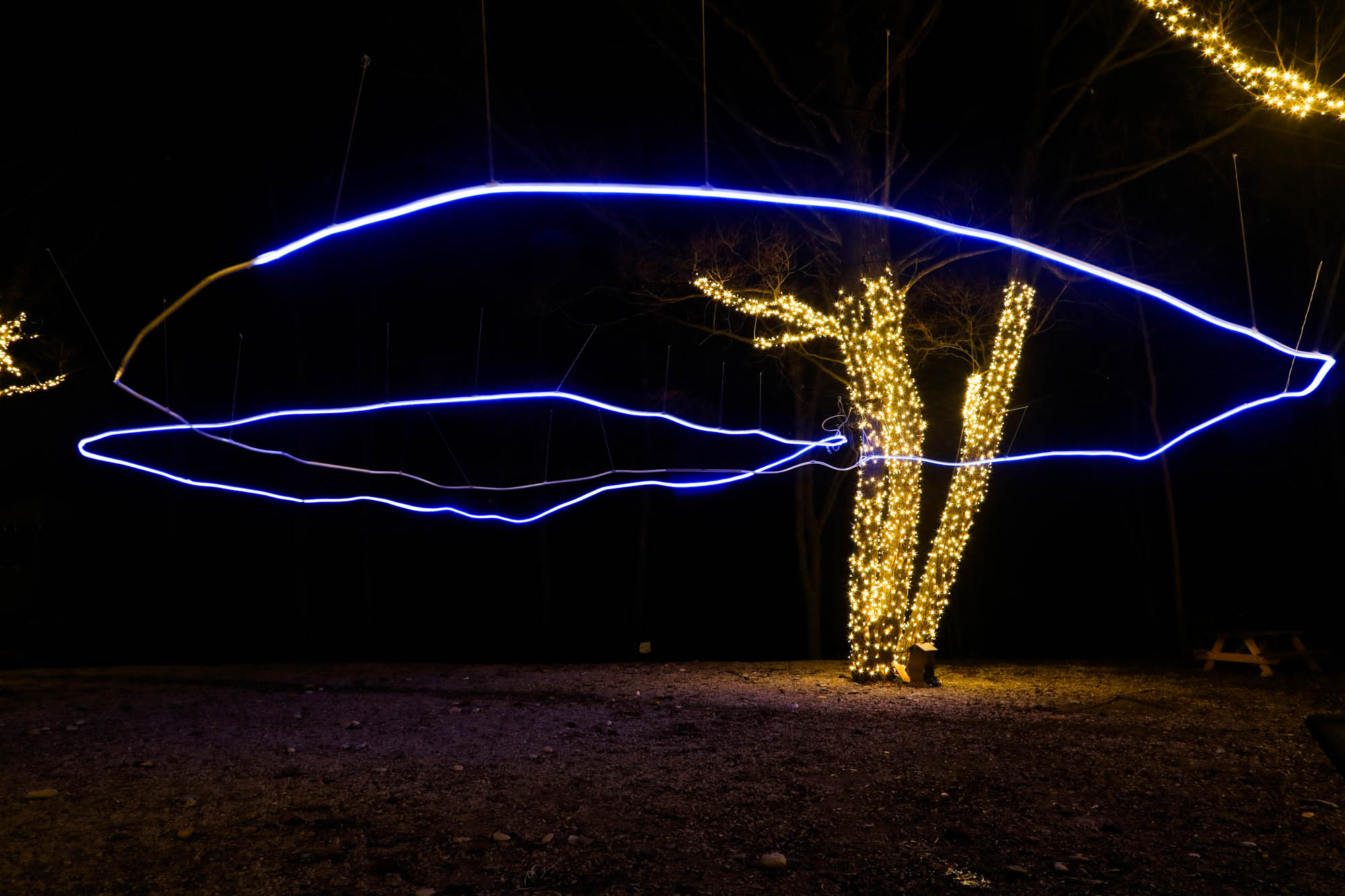 A pair of angelic halos

These two elevated loops of light, hung among the trees next to the west island’s beach, are meant to move like the winter winds and lake’s rolling waves. 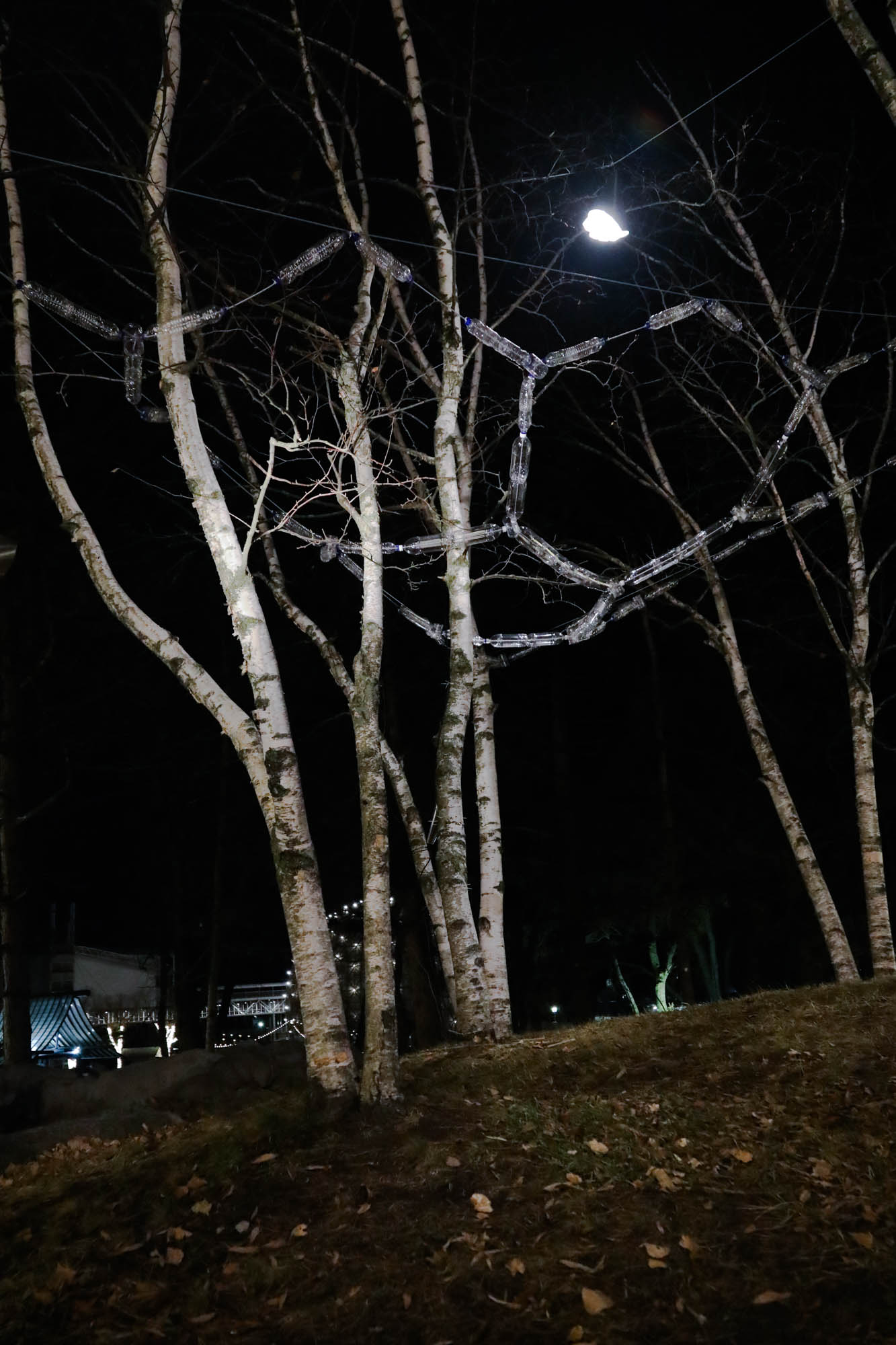 An overhead web of reused art

The Crunch of Snow Underfoot by Andrew Maize and Joshua Collins

These lines of suspended plastic bottles form a web between young saplings. From below, guests can watch the bottles switch hues with the fluctuations of the sky as it changes from one moment to the next. 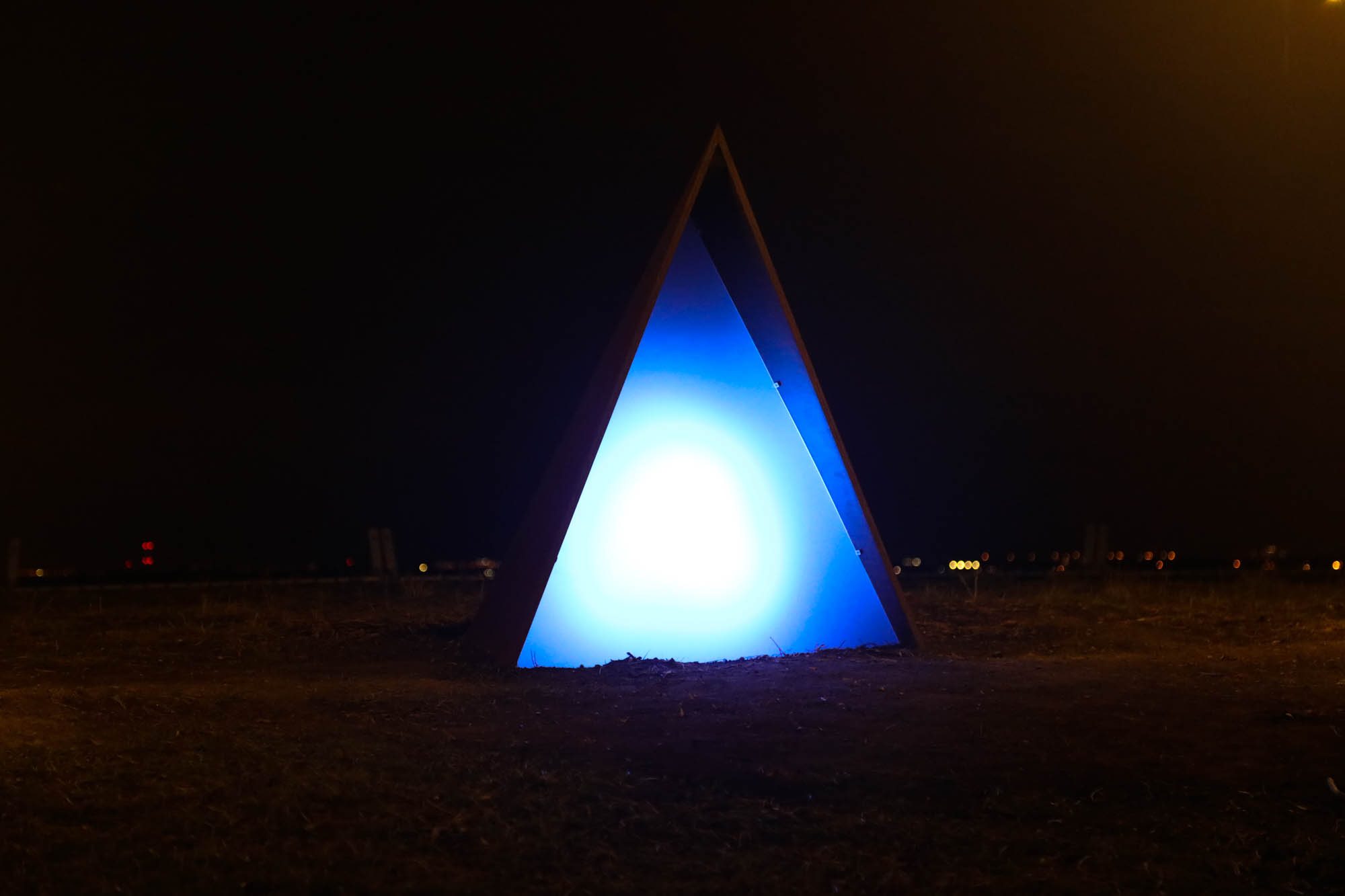 This sleek geometric structure is inspired by the warming huts once used by Canadian explorers. Through thermal imaging technology, the structure detects and captures body heat as viewers approach, temporarily changing the light from a cold blue to warmer hues of red, orange and yellow. 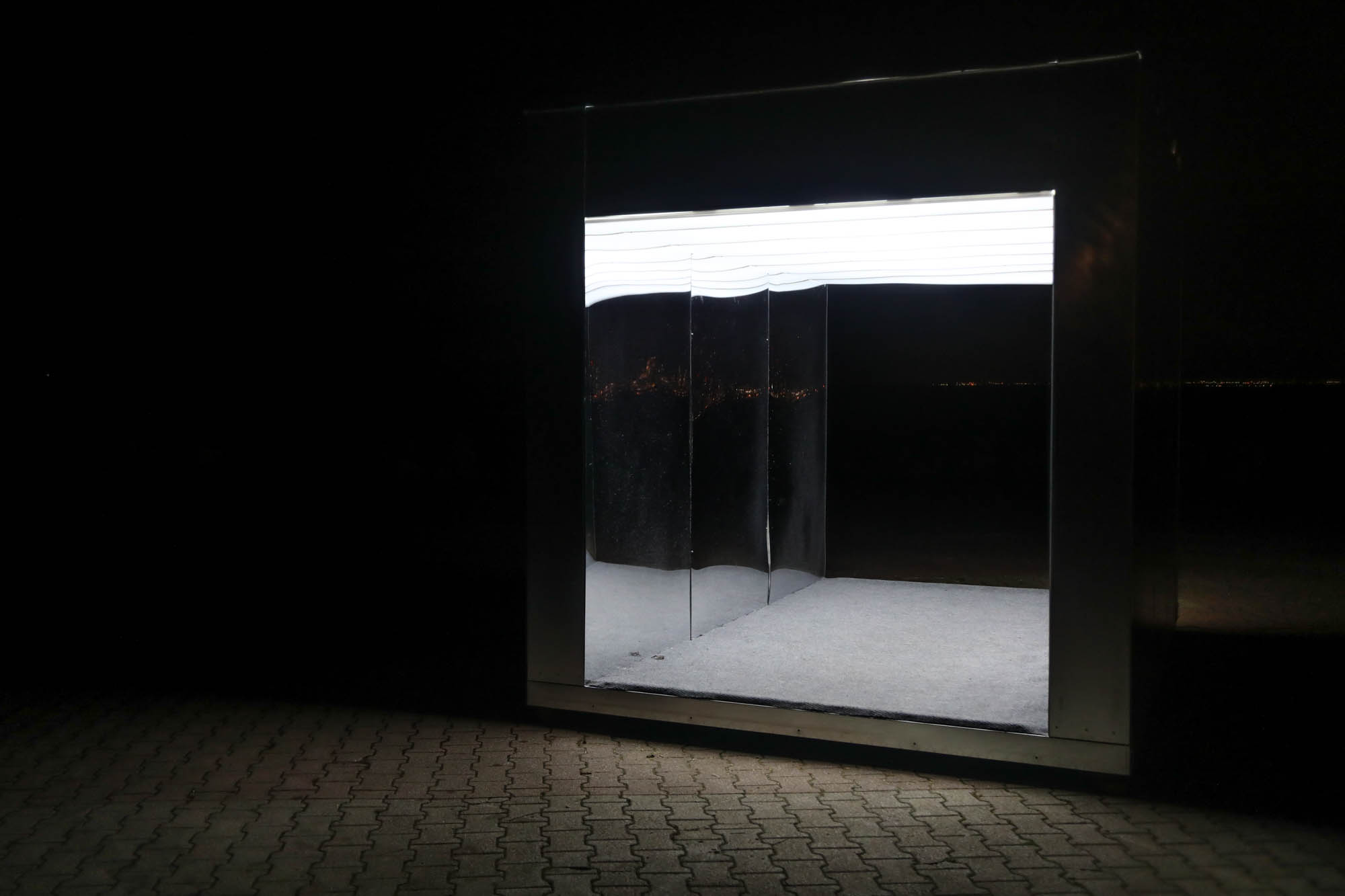 This simple, mirror-lined tunnel is located next to the lake, where the winter conditions are at their most extreme. It’s meant to protect visitors without shutting out the natural surroundings: daylight sneaks in through clear acrylic prisms in the ceiling, while the mirrors reflect of the lake, horizon and other surroundings.