Back in August, musical savant and primate enthusiast Justin Bieber released his first song since 2015, a dance jam called “Friends” that included the lyric, “Girl, you wonderin’ why I’ve been callin’? / Like I’ve got ulterior motives. No, we didn’t end this so good / But you know we had something so good.” Of course, everyone assumed that the song was about Bieber’s ex Selena Gomez who, at that point, had moved onto another Canadian music guy, The Weeknd. Fast forward to this week: The Sleeknd is no more, Selena is single and her old beau Bieber is hanging around like an exotic monkey at a banana convention. But are these two actually back together or just enjoying the warm glow of the paparazzi’s flash? We investigate.

JUSTIN BIEBER & SELENA GOMEZ HANG TOGETHER AT HER PLACE …ALL'S GOOD WITH THE WEEKND via TMZ pic.twitter.com/8FwSVxSshy

October 23: Paparazzi snap Bieber outside Gomez’s house. It’s the first time the two have been seen “together” since 2016. According to TMZ, the hangout included a few other friends and was totally platonic. Apparently, Bieber got back in touch with his ex after learning about her kidney transplant over the summer. And apparently The Weeknd (who has been on a world tour for the past several months) was totally cool with the friendly rekindling.
What does this mean? Given the Biebs’s feud with The Weeks, even an allegedly platonic hang feels like evidence of a bigger scandal.

October 30: Once again, TMZ catches #Jelena (please, God) logging quality time together, this time at brunch in L.A., where they chose a photo-friendly table. Next up on their Sunday Funday schedule was a trip to Zoe Church, where Bieber has been worshipping a lot lately as part of his personal-awakening-slash-image-rehabilitation.
What does this mean? Church is a big part of JB’s life these days. A TMZ source even claims that his preacher is the one who encouraged him to reach out to Selena. And you know what they say about the ex-couple who prays together…

October 30: People reports an official break-up between Selena and The Weeknd. They started off so hot, but fizzled out (per People’s source) due to conflicting schedules, and reportedly not at all because of Justin Bieber.
What does this mean? Selena is single again. Or at least she was for five seconds.

November 1: Paparazzi catch the totally-not-a-couple riding bikes and canoodling their way around L.A. The whole thing is so innocent, it almost makes you forget about this. Or this. Or this. (Be careful, Selena. Once an insensitive, racist bucket pee-er, always an insensitive, racist bucket pee-er).
What does this mean? The bike riding could be explained, but canoodling!? Come on.

November 2: Yesterday, Selena watched from the stands while her guy played hockey…and she wore his jersey. Plus, the relatively reliable Us Weekly confirms a relationship—not that we didn’t already know from jersey-gate.
What does this mean? Earlier this week, Gomez was also spotted in The Weeknd’s zip-up jacket. Someone is playing some serious sartorial mind games.

Either these two are back together, or they are creating performance art inspired by teenagers in the ’50s. True, Selena has been burned by Bieber before, but apparently it is not “too late now to say sorry.” 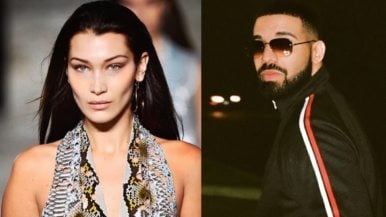 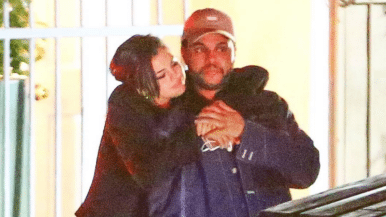