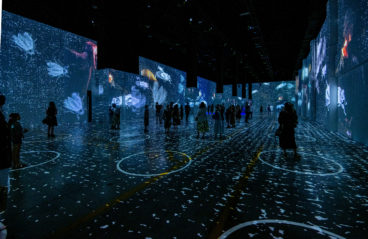 The co-producers of Toronto’s Immersive van Gogh exhibit saw the show in Paris and fell hard. They decided they had to bring it here, and then, well, Covid happened. Here’s their story

In February, Toronto arts producers Svetlana Dvoretsky and Corey Ross announced their latest collaboration: Immersive van Gogh. The exhibit—which involves 53 projectors and 90 million pixels over 600,000 cubic feet of space—was set to open in May, but that was before a global pandemic sent everyone back to the (literal) drawing board. Here, Dvoretsky and Ross explain how immersive art is more than just paintings projected on walls, why their work matters more than ever, and how they created the world’s first ever drive-in art exhibit.

You were pretty much ready to go and then along came Covid. Was there a time when you thought the show might not go on?

Corey: Definitely, that was something that a lot of arts organizations were dealing with. Our industry has been totally decimated—Mirvish cancelled their season, TO Live laid off 600 workers. We were extremely panicked, both because of how much work had gone into the show and how much we wanted people to see it, and because Svetlana and I both run our own arts production companies so we’re extended financially and we both have our teams we employ. The idea of laying people off was totally devastating. After the government had announced various restrictions, we were really committed to the idea of, okay, let’s focus less on what we can’t do and figure out what we can do.

Svetlana: Obviously as the entire city went into lockdown, one of our key worries was whether it would be safe for the public to see the work. But we also had to deal with more immediate issues, like the fact that all of our projection equipment was in the States, so we had supply chain concerns. And then also that construction workers weren’t allowed to work in Toronto at that time, so we weren’t sure how the exhibit was going to be assembled. We came up with a solution, which was to have everything put together in Chicago, where that kind of work was allowed, and then loaded onto a truck and delivered pretty much ready to go. Normally we would have had Massimiliano Siccardi, who is the creator of the exhibit, come over from Italy to oversee set-up and installation. Instead we spent hours with him on Zoom calls, which isn’t exactly an ideal way to see an immersive art exhibit. 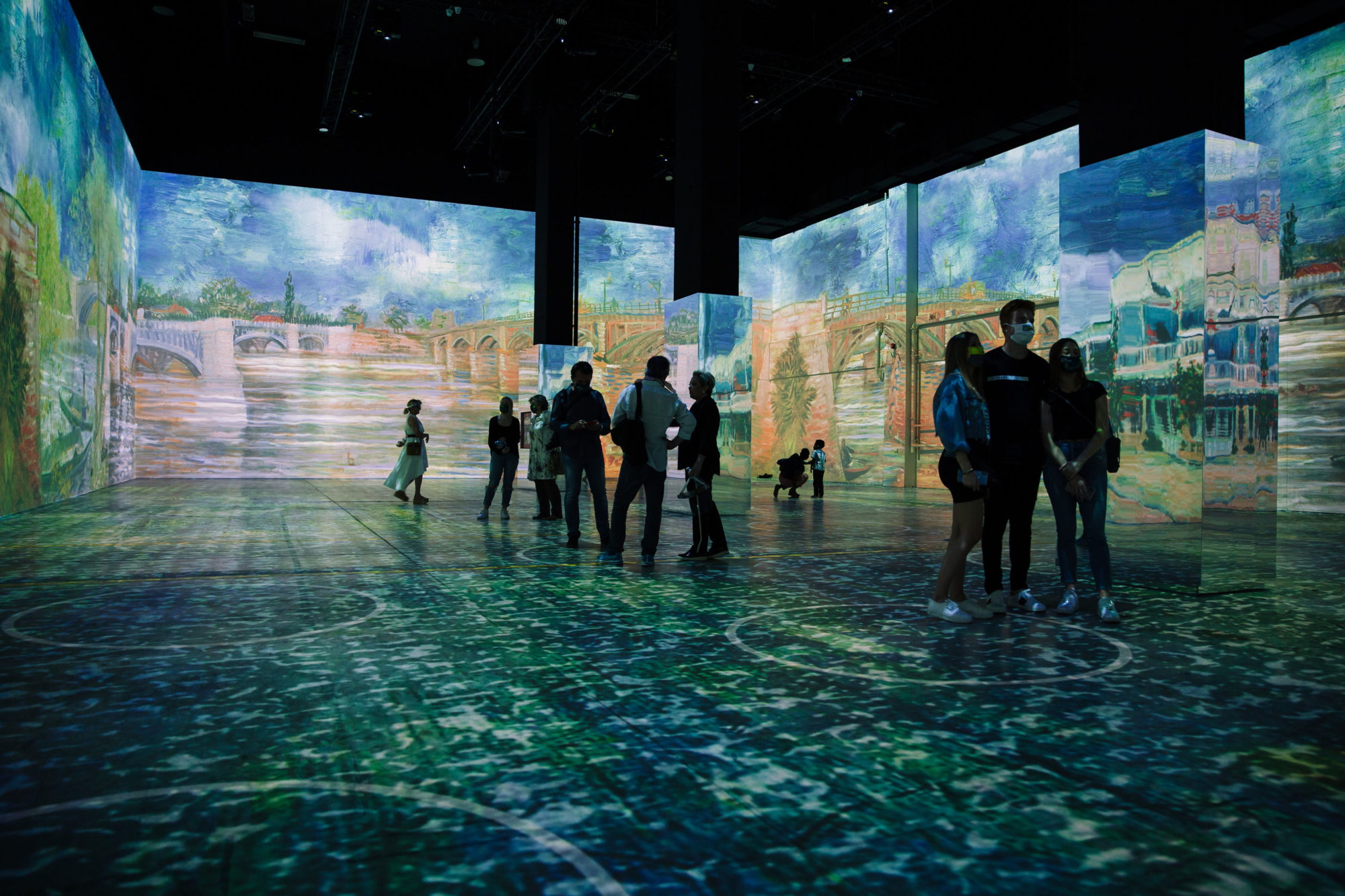 For those of us who are unfamiliar: what is an immersive art exhibit, exactly?

Svetlana: It’s not just large paintings projected on the walls, which is what a lot of people think. To put this together, we licensed 400 high-resolution images of 60 different van Gogh works, then Massimiliano began the process of animating the art, which is totally disassembling the images and reconfiguring them. Different works of art are mixing and melding with one another, clouds or sunflowers will disappear and then reappear somewhere else. I describe it like you are scuba diving in the clearest, most beautiful water and when you look around it’s art—in front of you, behind you, above, below. That’s how I felt when I first saw Massimiliano’s Starry Night exhibit at Atelier des Lumière in Paris, which is the work that inspired our exhibit. Just totally blown away.

Corey: On Svetlana’s recommendation, I bought a ticket to Paris. I was skeptical when she told me about it. I remember on the flight over thinking, What is this show that sold two million tickets of projection art in a city where you can go to the Louvre and see the masters? Once I saw it, I understood. It’s something completely new that sits at the apex of visual art and a museum experience, filmmaking and experiential theatre. 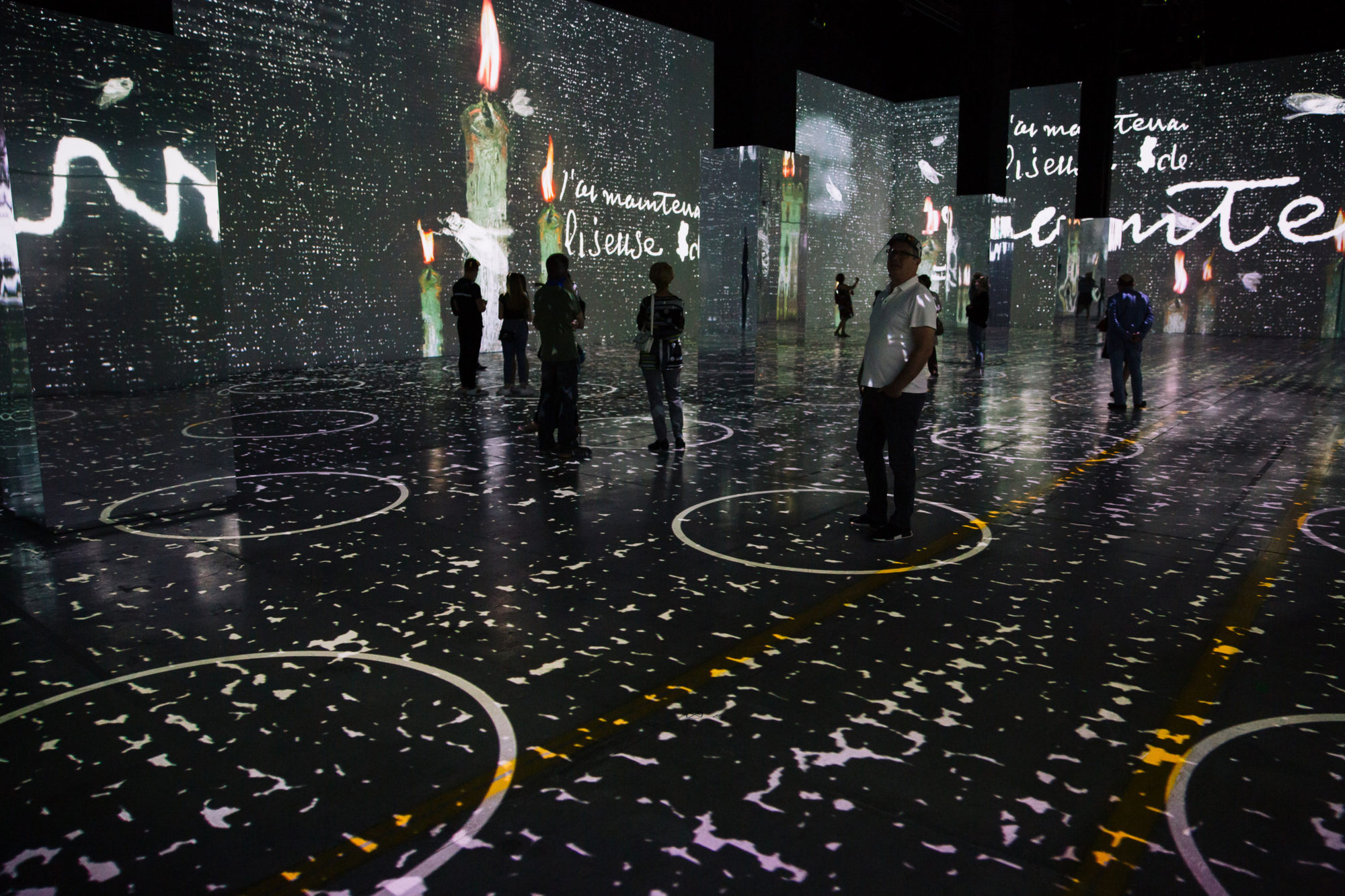 And that was before you turned it into a drive-through experience. How did that idea come about?

Corey: Well, we ended up being extremely lucky that our venue, the basement of the Toronto Star building, has a ramp that leads to the loading dock where trucks used to come to pick up the newspapers. I was driving my own car in one day, and that’s when it hit me. I texted Svetlana and we got 10 friends to drive their cars in. This was in March, so the city was totally shut down. I remember there was no one on the road. We all came in, parked, and then we just kind of looked around and gave each other the thumbs-up and drove home. That’s when we realized this could really be an option. Now, we’re seeing people talk about drive-in concerts and other events, but at the time nobody had done it. We announced the idea for “Gogh By Car” six hours before the Toronto Zoo announced their drive-through plan.

Did you get any pushback?

Corey: Oh, there was definitely some feedback from people who felt like this wasn’t a safe idea. I remember after we put up advertising in bus shelters timed to Mother’s Day, I got an email from a man who said, “Thanks very much, but I love my mom so I don’t want to kill her.”

Svetlana: I think what we really wanted people to understand is how much work we have put into ensuring safety. We have spent hours coordinating with public health, making sure all our plans put safety first. That’s why it was so meaningful to have the mayor cut the ribbon at our opening this week. 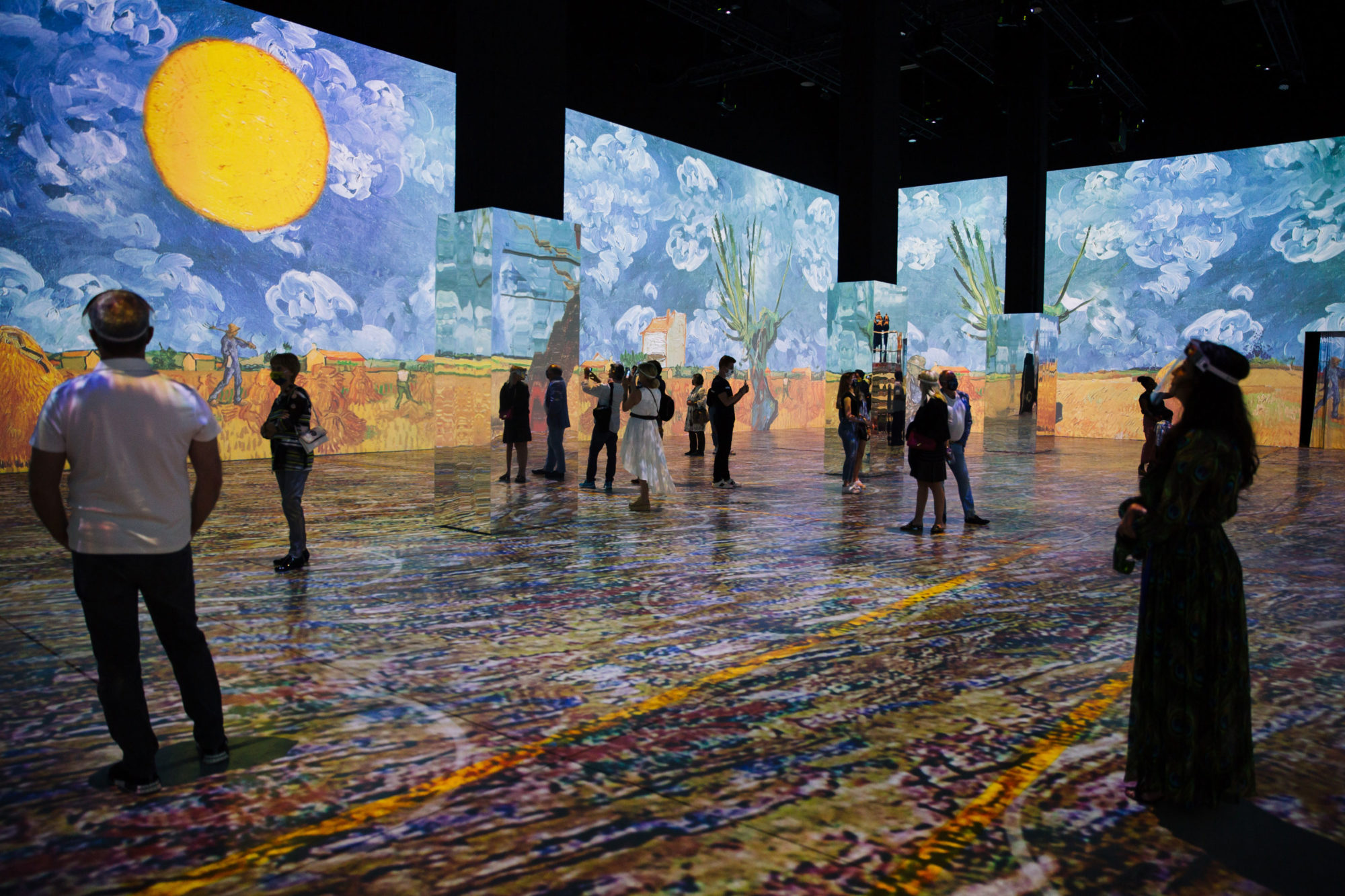 Did the exhibit have to be adjusted to fit the drive-in concept?

Svetlana: Not originally, but our plans have changed as the rules have changed. At first, we weren’t sure when we were going to be able to have people walk in, so the entire space was going to be for cars. Now that we can do both, we have the original exhibit, which now has the social-distancing circles, and the drive-in exhibit, which is in an entirely separate room. That meant going back to Massimiliano and his team, who put something together in a very short period of time—two weeks.

Do you think people will be able to get the full immersive experience while in their cars? I guess it’s less like scuba diving, more like peering out from a submarine.

Svetlana: I would say that the ultimate way to experience this is by walking through, which is why every drive-in ticket comes with the complimentary opportunity to come back and do the walk-through whenever people are comfortable doing that. But the car experience is also really cool and obviously unique to the moment. And the fact that van Gogh used a lot of primary colours and the images are projected much larger than the originals definitely works in our favour.

Corey: One of the things I love is seeing these beautiful, familiar images—van Gogh’s sunflowers, the clouds—and then having them projected on this industrial space, which is concrete, cement brick walls. I love that contrast and how it adds this whole new layer. It really is the perfect setting.

Svetlana: It wasn’t the first place we looked at. There were some empty retail spaces in Yorkville that had some potential. And then there was a space in the east end where we were pretty far into the process, but ultimately we couldn’t come to an agreement with the landlord. At the time, it was so frustrating to have to start from scratch, but none of those buildings have a ramp for cars, so we could never have done what we’re doing. 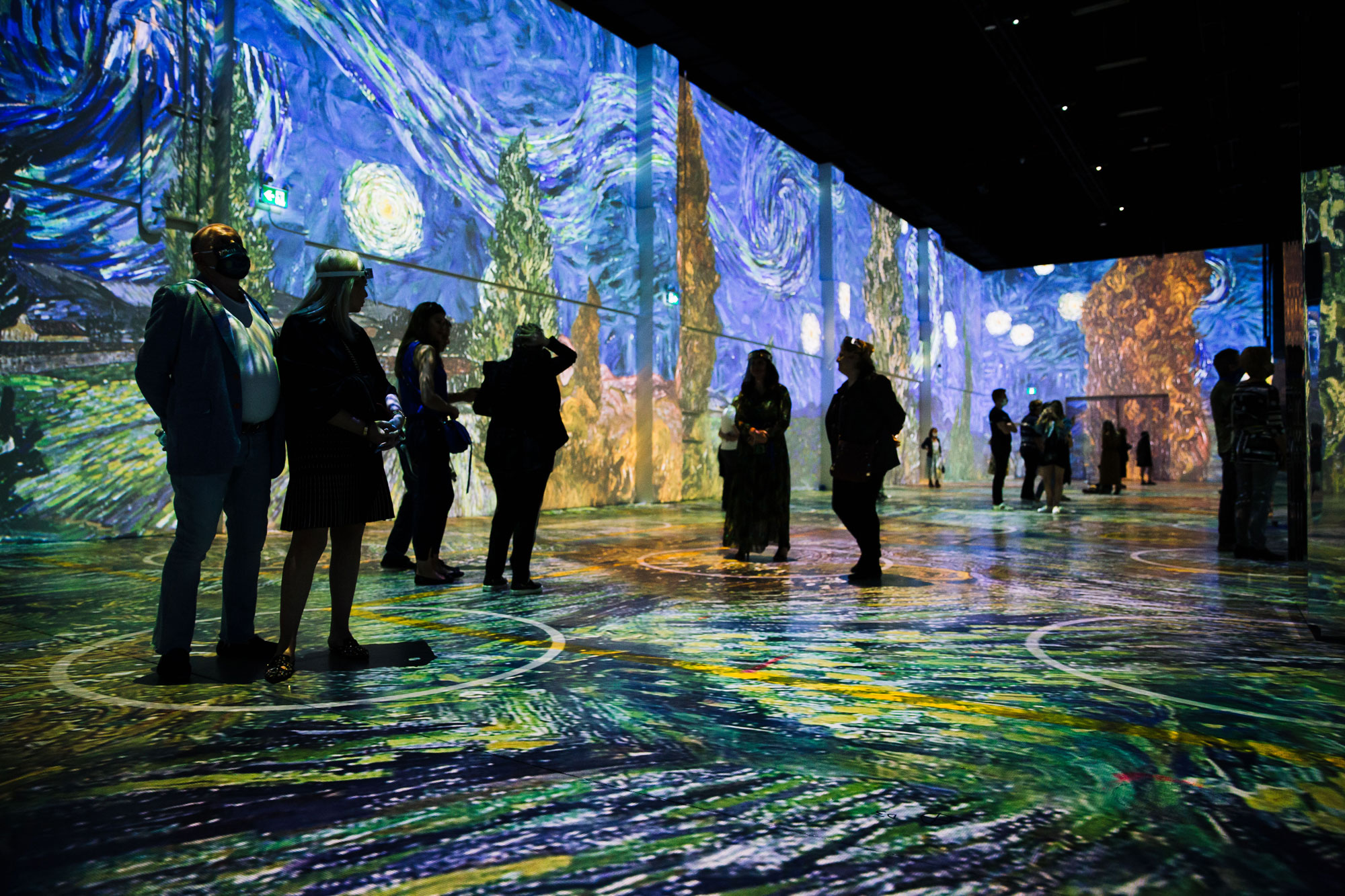 Ticket sales have been fantastic. Is Toronto a city of van Gogh super fans, or are people just really excited to get out and experience culture again?

Svetlana: As far as van Gogh, I think definitely this is an artist who people are fascinated by. Maybe they know he’s the guy who cut his ear off and that’s intriguing, or they know some of his most famous works, but what we’re offering is an opportunity to go into his psychology and have a really emotional experience—almost like you’re watching a documentary without words. It’s completely different from going to a traditional gallery and learning Vincent van Gogh was born in 1853, and so on. What I love is that the exhibit is ideal for all audiences, whether it’s kids who will love the bright primary colours or art connoisseurs who have an opportunity to examine the technique and brush strokes, which are a lot more visible because everything is magnified. 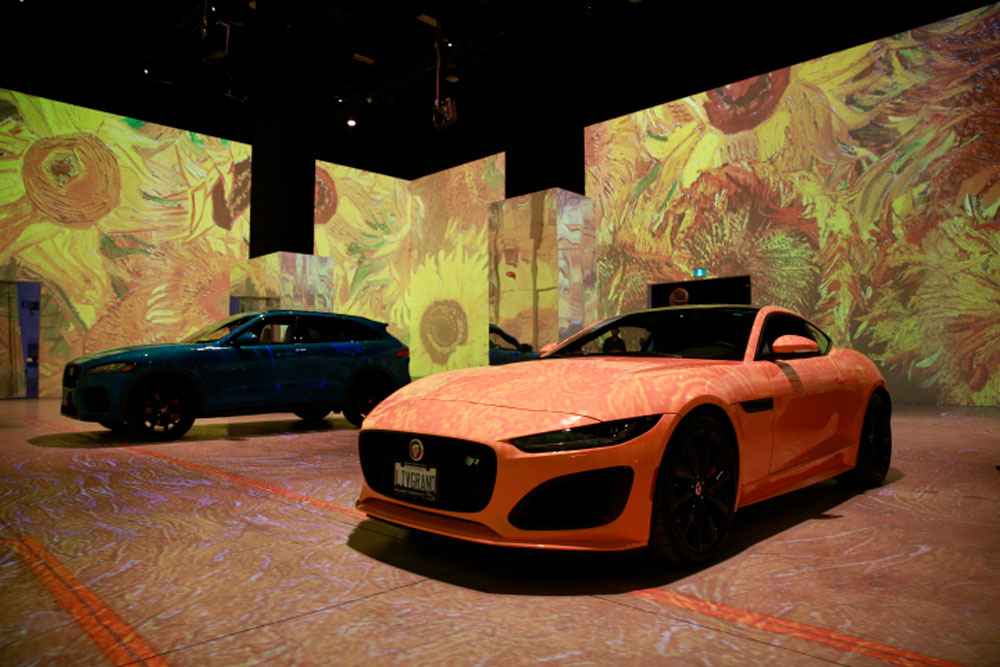 Corey: And also, yes, I think there is a lot of pent-up desire for art and for collective cultural experiences. At the beginning of the pandemic, we saw a lot of artists performing on Zoom as a way to sustain and uplift. That was great, but I think what’s missing is the collective part, being in a room and experiencing art with other people, which is what separates what we do from watching TV. To be able to keep the embers of that burning is really important.

Svetlana: We had the members of the Lemon Bucket Orkestra come through, and when we were chatting beforehand, they were talking about how bleak things looked, how they didn’t have anything booked through the end of the year. And then after they had gone through the show, they said they have a bunch of new ideas and approaches that they couldn’t wait to brainstorm. To be able to provide inspiration during such a difficult time feels like an important achievement.

Do you think van Gogh would approve of the show, if he were alive to see it?

Corey: van Gogh was such an innovator. He had a completely new way of looking at colour, brush technique, composition. I like to think he would love our innovation.