The first season of The Handmaid’s Tale set a high benchmark. It earned 13 Emmy nominations and won four awards, including outstanding drama series. And, despite having been published more than 30 years ago, Margaret Atwood’s dystopian story seemed eerily prescient as Trump moved into the White House, as women marched on Washington and as the #MeToo movement took shape. We sat down with the show’s cast and creators to find out how they intend to follow that up in season two, which premieres April 29 on Bravo (and on Hulu in the U.S.).

The GTA gets another starring role

City hall, Ripley’s Aquarium and the Royal York were just a few of the GTA locations that showed up in the first season. There will be plenty more added to the list this year. In the trailers for season two, attentive viewers can spot Artscape Wychwood Barns, the courtyard at Wycliffe College, the council chamber at Vaughan City Hall and the outskirts of Uxbridge, as the rural, nuclear wasteland of the Colonies, one of the most important new settings.

Parts of season two were filmed in Cambridge, Ontario, which, along with Toronto and Hamilton, stands in for Cambridge, Massachusetts. Executive producer Bruce Miller, a New England native, was initially skeptical about portraying his stomping grounds with GTA locations. “But, in the end, I think we didn’t have to make any aesthetic compromises at all,” he says.

When we visited the production, it was an unseasonably warm yet dreary February day in Hamilton, where the stately Waterford house stands below the brow of the Niagara escarpment. The crew was prepping for the rest of the day’s shoot: a pre-Gilead portrait of the Waterfords stood on a table, though a Miami Vice CD and Fifty Shades of Grey paperbacks—presumably belongings of the house’s actual owners—had yet to be cleared away.

Atwood didn’t give the writers too many hints

The first season exhausted Atwood’s novel, ending as the novel did, with Offred entering the back of a van. The second season ventures into terra incognita—Atwood, a consultant on the show, has never publicly shared her thoughts on the book’s cliffhanger ending. “In some ways, it made it more fun for Margaret, because she had a room full of people who’d read the book…and they were really good at coming up with possibilities,” says Miller. Together, they decided on the direction of the intense first episode and the following 12.

“When I first read the script two years ago, I fell in love with the story as a piece of fiction and I wanted to know what happened next,” says Max Minghella, who plays Nick, who gets more screen time this year alongside 20-year-old newcomer Sydney Sweeney. She has a prominent role as Eden—whom she described as an “innocent, pure, dangerous little girl”—who complicates Nick’s secret relationship with Offred. “I had to pinch myself when I came on set the first day,” she says. “It was like jumping into a whole other world. It was very intimidating.”

Joseph Fiennes, who plays the powerful but morally compromised Commander Waterford, says the new season is bleak. “Although it’s 100 per cent authentic to the book and to the first season, the departure is darker and creepier in many respects.”

Ann Dowd, who took home an Emmy last year for her portrayal of Aunt Lydia, says Miller understood the book “at a cellular level,” and trusted his ability to take the story forward. “The adaptation is so true to who these people are that, when I read the new script, I thought, ‘Are you kidding me? How did they come up with this?’ It’s truly remarkable, the original nature of it.”

Miller, for his part, says his driving ethos was, “In success, change nothing.” “It’s a huge burden, this Emmy sitting next to your keyboard,” he says. “What you have to do is just throw it away and write the show.”

Season two has some homegrown talent

Toronto native Jeremy Podeswa—who has directed episodes of Game of Thrones, Boardwalk Empire, Six Feet Under and True Detective—directed episodes nine and 10 of the new season. The Handmaid’s Tale presented a perfect opportunity for him to return home. “This is Margaret Atwood land. She’s such an icon here, and the book resonated with Canadian readers,” he says. “So I think for the show to be done here just seems like the right thing.”

The series is also a hometown project for Amanda Brugel, the Canadian actor who plays Rita, the Waterfords’ maid. She expresses frustration that the show’s success, largely a product of work by Canadian crews, isn’t recognized by Canadian awards shows, given it’s technically an American production. “It’s still very much our book and our show,” she says. “I’m the only Canadian in the cast, so I feel a great amount of responsibility to make sure I do a good job.”

The sartorial is political

Politics penetrate deeply not only into the writing and acting, but also into the show’s costumes. There will be subtle changes: some of the female characters’ outfits will have more structure and stronger shoulders; every one of the Commander’s costumes will have one thing that’s just slightly out of sorts. “It’s a little bit of disarray,” says costume designer Ane Crabtree. “In season one, I was an architect of a new world, a new dystopia. In season two, I’m tearing it down a little. I’m showing the truth behind the brick façade, so you’ll see tiny visual flaws in everyone.”

The walls of Crabtree’s workshop are lined with colour-coded brainstorming collages, featuring Soviet propaganda posters, fashion photography, Polaroids of actors trying on their now-iconic outfits, and much more. Stacks of the distinctive handmaid wings sit on a table, and racks of red, blue and olive costumes are contrasted by more unique pieces, like the racy costumes worn at Jezebel’s or the more modern, casual clothes worn in the Toronto-set scenes.

“I’m an artist and a brown-skinned multi-racial person with an immigrant mother—all the things Trump is against,” she says. “So, hell yeah, I threw it back into the clothes. They’re all I had as a voice.” 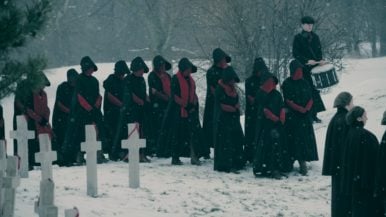 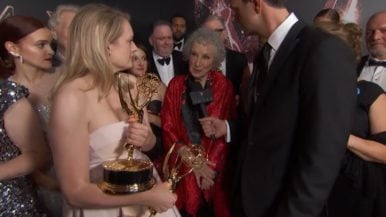 What people were saying about Margaret Atwood’s Emmy moment 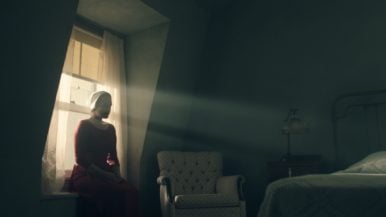 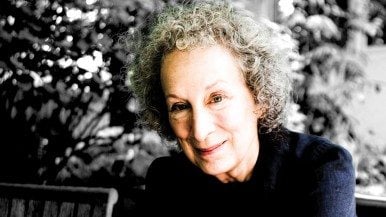 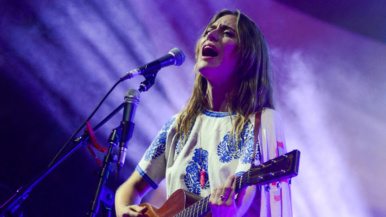 Feist’s comeback concert, Hot Docs and eight other things to see, do, hear and read this week