Anyone who watched the NBA playoffs this spring likely had their eye on the ball, but Elizabeth Semmelhack, the creative director and senior curator of the Bata Shoe Museum, had her eyes on the players’ shoes.

Late in the playoff push, Semmelhack, who literally wrote the book on sneakers (twice), with Outside the Box and the forthcoming Collab: Sneakers and Culture, called a team rep with a big request: “Can we please have the players’ shoes from the playoffs?” They agreed. Now, those shoes are on display at the museum until September 18, when they’ll be auctioned off to raise money for the MLSE Foundation. Here’s a look at the collection. 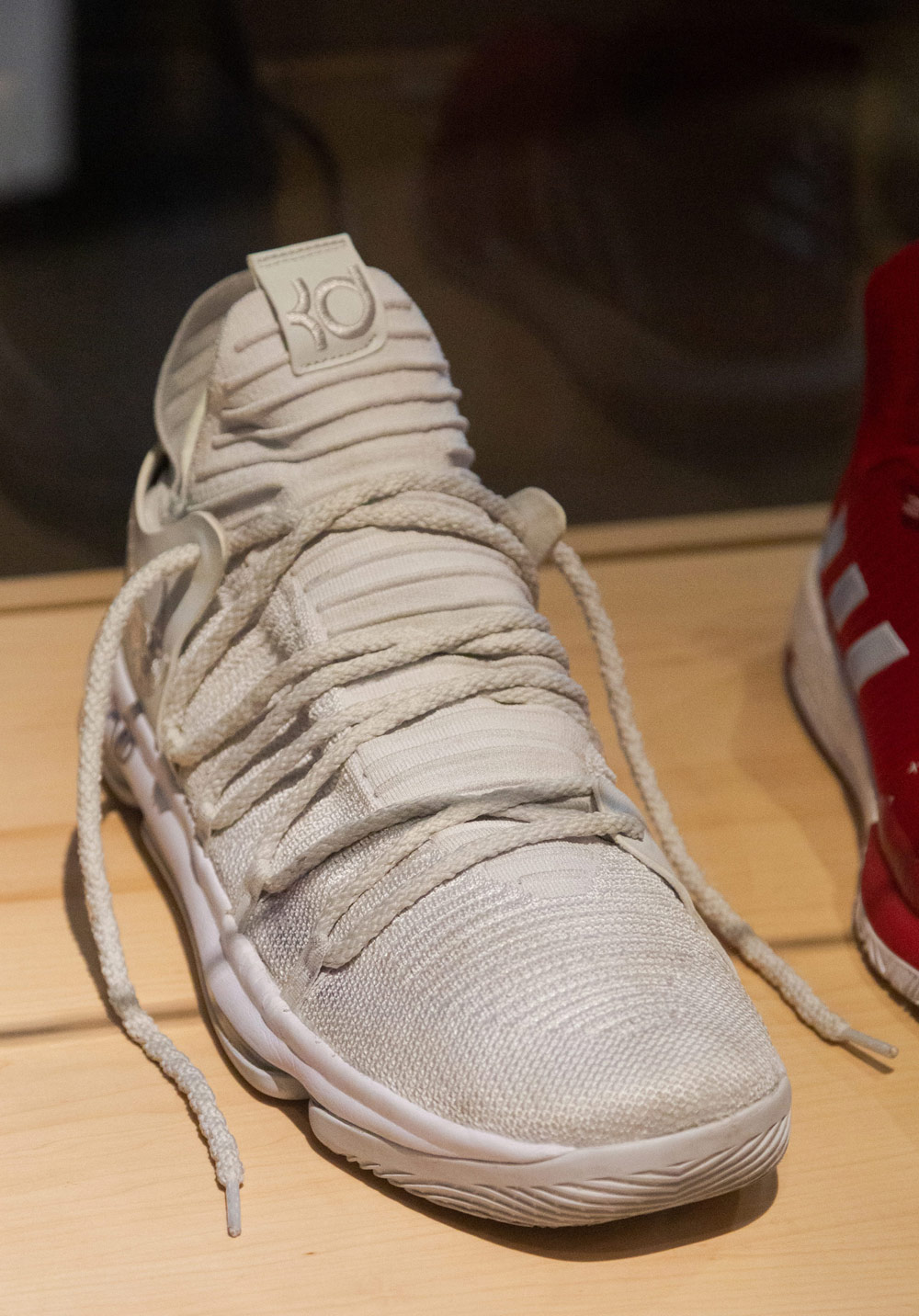 During the final game, Siakam, the Raptors’ breakout star, donned a pair of Nike KD 10s—the eponymous shoe of the Golden State star and Raptors frenemy Kevin Durant. Today, basketball shoesters take notes from the 19th century, when shoemaking was bespoke and each pair was made specifically to fit a person’s feet. The KD 10’s knit body and zig-zag lacing has the same goal, but without the cobbling. Flyknit technology mimics a custom-made shoe by helping it mould to the foot better than leather or other composites. Look closely at the foam heel and you can see black marker. Siakam scribbled “RIP DAD” in honour of his father Tchamo, who died in 2014. 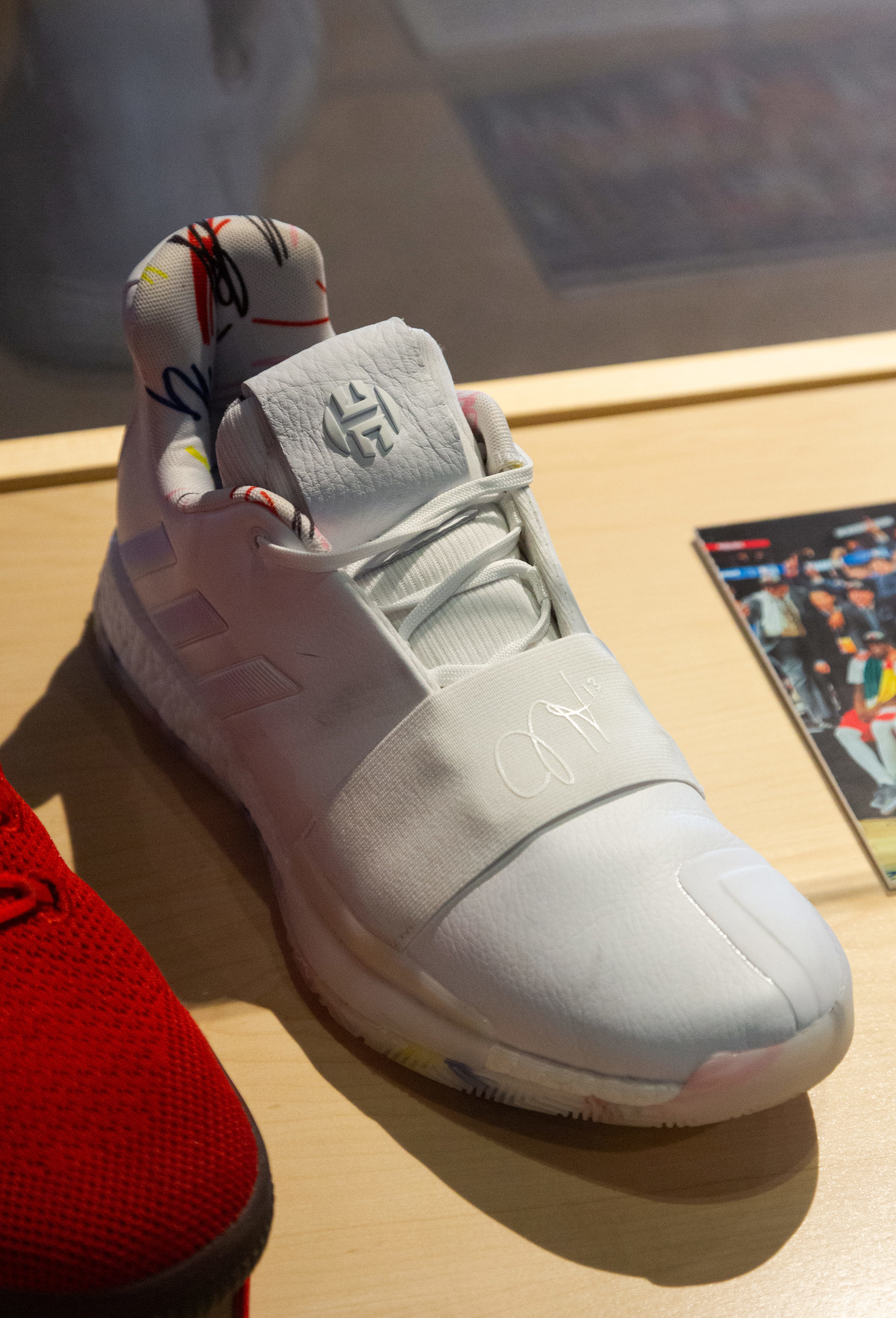 Lowry and VanVleet, the Raptors’ dynamic backcourt duo, both played Game 6 in Adidas Harden Vol. 3s, the signature shoe of Houston Rockets star James Harden. Its low-cut design resembles the shape and structure of running shoes in the 1800s, which often had a cross-shoe strap. “The human foot hasn’t changed much since the 19th century,” says Semmelhack. 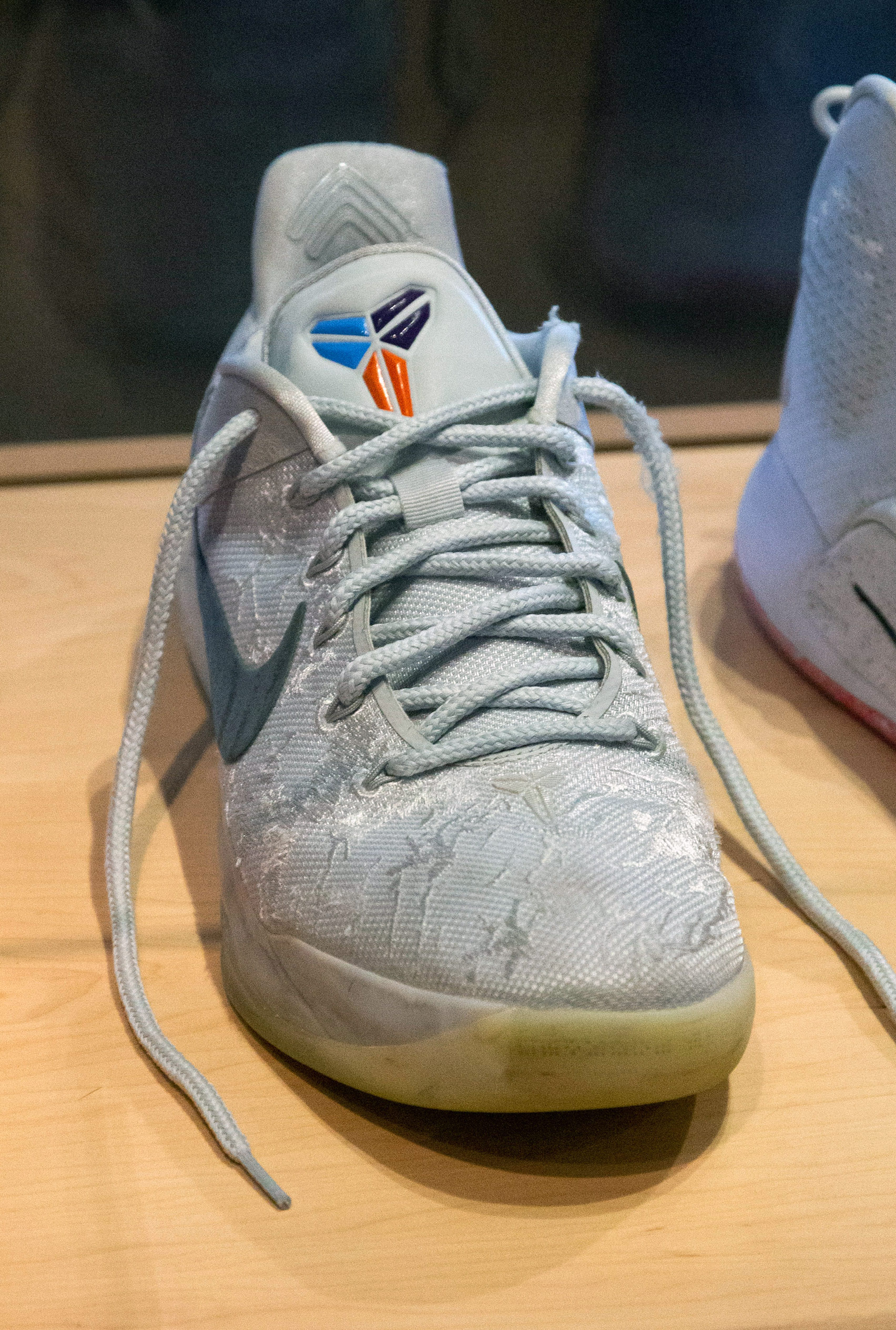 Raptors swingman Norman Powell emulated former league MVP Kobe Bryant by lacing up a pair of Nike Kobe ADs. This is the most old-school sneaker in the bunch: low-cut kicks gained popularity among NBAers in the 1980s, and a few players still sport them today. Semmelhack says the shoes arrived unlaced, so that’s how they left them. 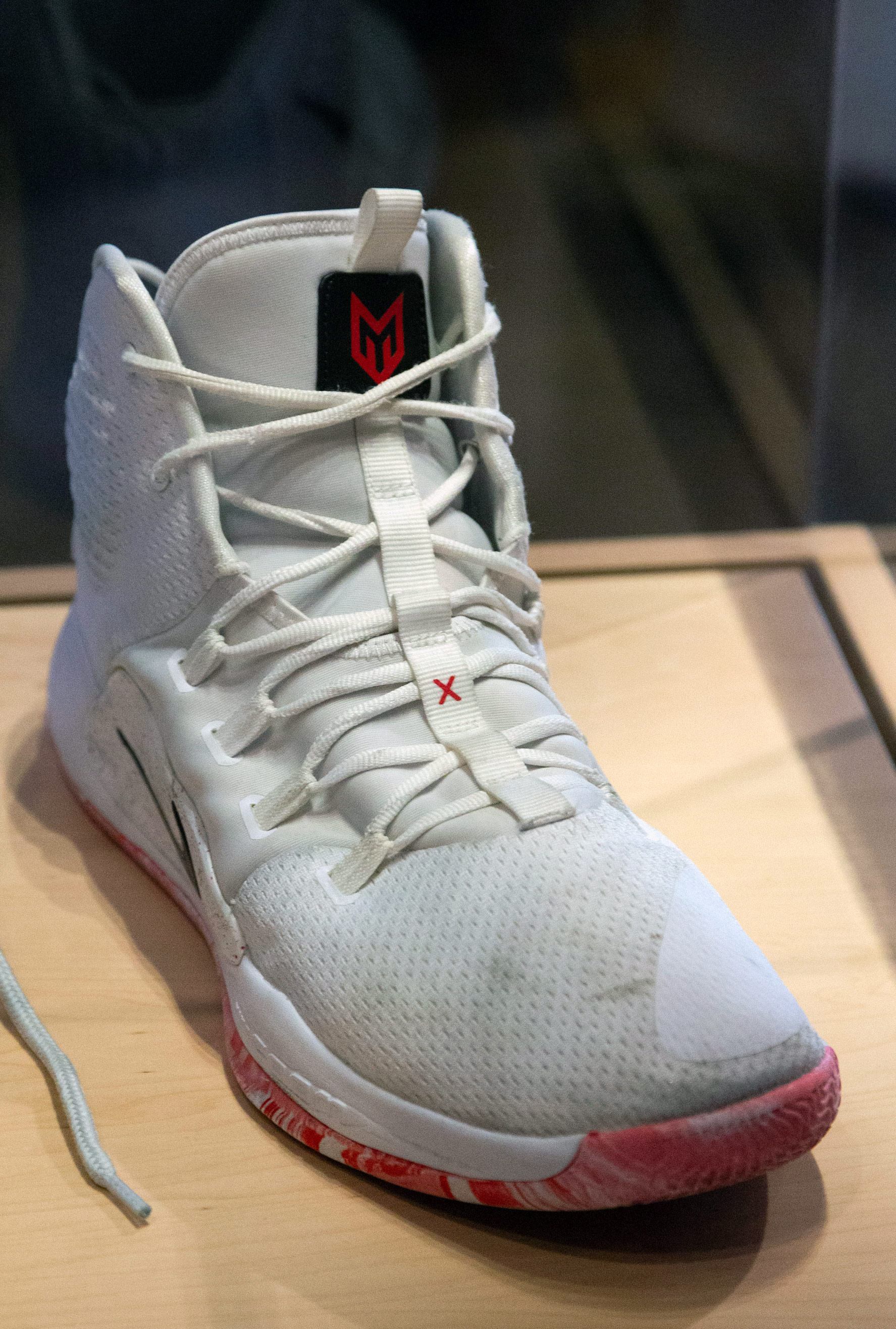 The Raptors’ seven-foot-one centre wore these size 16 red-and-white Nike Hyperdunks throughout the postseason. Semmelhack says she was worried they were too big for the display case, but she made do. 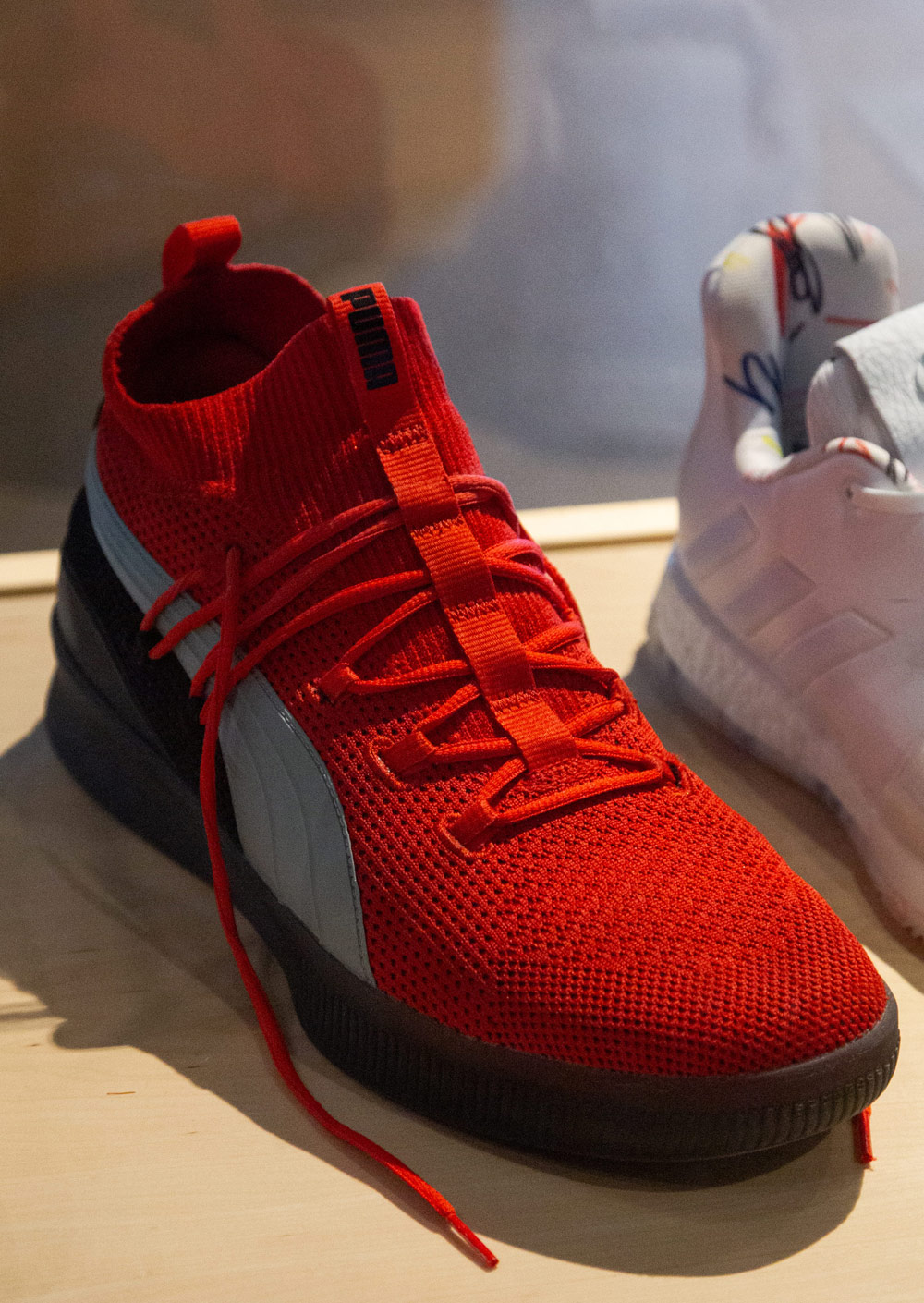 Before the start of the 2018-2019 season, Danny Green signed a deal with Puma, a company more renowned for its work in track and field shoes than basketball kicks. The Puma Clyde Court is a throwback to the days of Walt “Clyde” Frazier, the star guard of the New York Knicks in the 1970s. Frazier was one of the first NBA players to get a signature sneaker, and his personal flair (fur coats, fedoras, wingtips, etc.) was a precursor to the style-obsessed modern NBA. “Puma established a huge presence in the NBA in the 1970s, but Nike and Adidas have been dominant of late,” says Semmelhack. “Now, Puma is trying to reassert itself.” The Clyde Court is a good start: it has the classic Frazier look but ultra-modern touches, like a sock build-in for a snug fit. 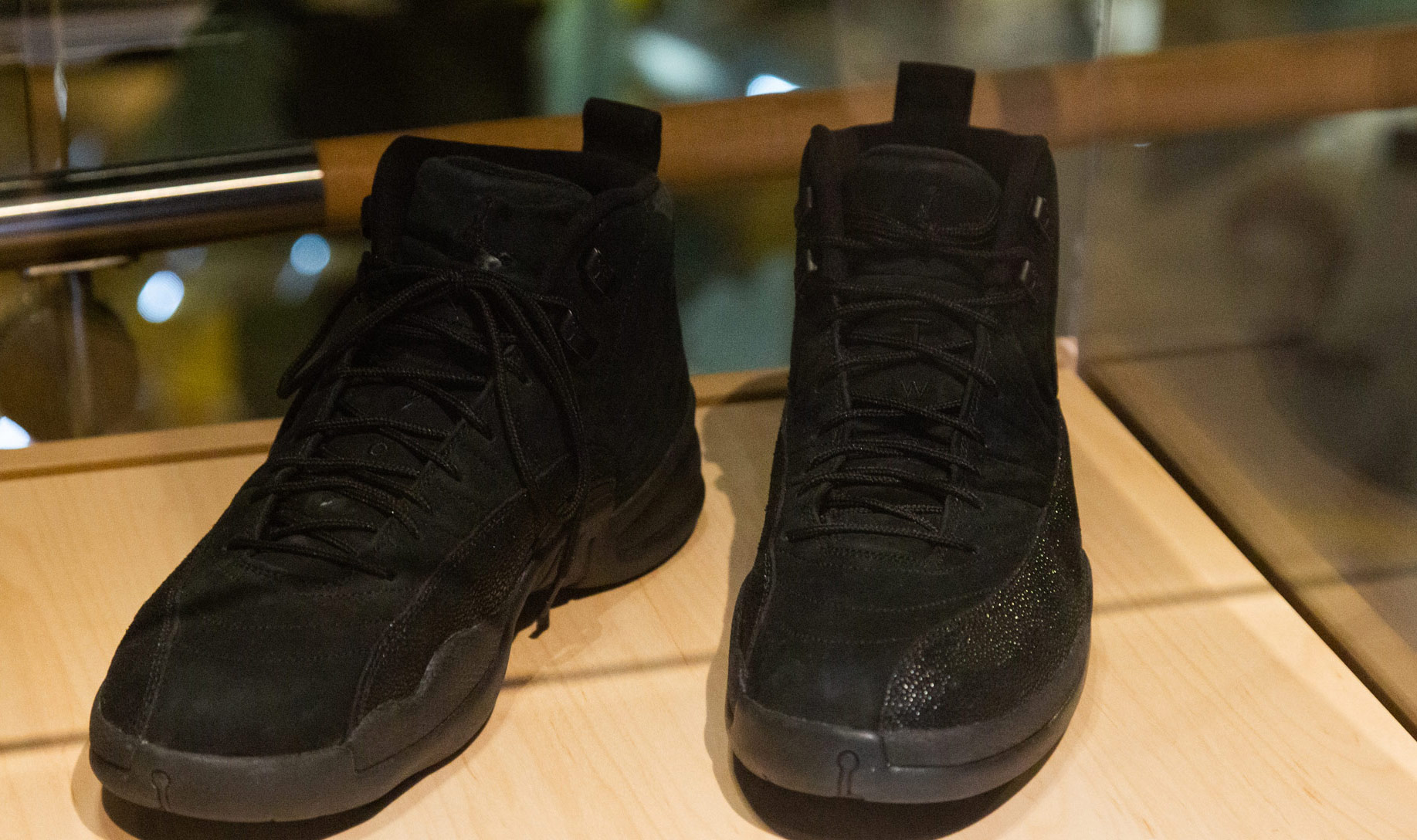 No Raptors shoe collection would be complete without the footwear of the team’s global ambassador, court side cheerleader and masseuse . The museum acquired this pair of Nike OVO 12s, worn on Drake’s Boy Meets World tour, back in 2018, but Semmelhack thought they’d fit nicely into the display.

An earlier version of this post incorrectly stated that the shoes on display were from the championship game. They are actually a collection of shoes from various playoff games. Toronto Life regrets this error.