“We’ve sold 5,000 tickets so far”: How the team behind Immersive Van Gogh pulled its new show together to raise funds for Ukraine

“We’ve sold 5,000 tickets so far”: How the team behind Immersive Van Gogh pulled its new show together to raise funds for Ukraine

One year ago, Valeriy Kostyuk conceived of an art show highlighting the works of Taras Shevchenko, the celebrated 19th-century artist and bard. Kostyuk, a Ukrainian-born and Toronto-based producer at entertainment company Lighthouse Immersive, wanted to showcase the paintings and poems of Shevchenko through a modern lens at the Bloor West Village Ukrainian Festival in September 2022. But Russia’s invasion of Ukraine accelerated Kostyuk’s plans. He and his team worked tirelessly to get the show ready by March 15, and are donating 100 per cent of the proceeds to the Red Cross in Ukraine and the National Bank of Ukraine fund. Here’s how it all came together.

“I was raised in Odessa, a lovely town on the coast of the Black Sea. It’s one of the cultural capitals of Ukraine, with beautiful neoclassical architecture and lots of historical theatres. Nobody in my family worked in arts and culture themselves. The closest we got was when my grandmother got a job working in a cinema, but as an accountant. Still, when I was young, my parents would take me to local shows, plays, circuses and operas.

“When I was in Grade 5, my family moved to Toronto, but my childhood education in Ukraine stayed with me. I became interested in arts and culture management and producing because in Ukraine, the arts are ingrained in us as kids. Every single classroom in Ukraine has a portrait of Taras Shevchenko above the blackboard. We would study his poetry in literature classes, memorize it and recite it. He has been a part of my life from the very beginning.

“Back then, he was just a painting on a wall—often looking tired and aged. It was only when I got older and more serious that I understood his importance. Shevchenko was born a serf peasant and lived as one for 24 years, until a fellow artist used the proceeds from the sales of his paintings to buy Shevchenko’s freedom. Later on, Shevchenko was imprisoned at the Russian military garrison in Orenburg, near the Ural Mountains, for 14 years for writing pro-Ukrainian poetry. He died at the age of 47, and despite being exiled for a large part of his life, in our country he is probably the equivalent of Shakespeare. He reminded Ukrainians of their national identity when it was illegal to do so under the Russian empire.

“Months before the start of the current Russian occupation, I had been wanting to showcase Ukrainian culture in a fresh, innovative way. Until now, the stereotype is that our culture revolves around Hopak—a solitary concert dance often performed by male soloists—and Shevchenko’s poetry. It was important to me to modernize some of our traditions and update people’s perceptions. Inspired by the work we did with Immersive van Gogh, I thought, How can I take this experience and use it to benefit my own culture? That’s where the thought for a Shevchenko exhibit came in.

“I shared the idea with my co-producer Natalia Deliyeva, and she liked it, too. So in May of 2021, we started retrieving high-quality digital works from the National Museum of Taras Shevchenko in Kyiv. Together with museum curators Taisia Poda and Timur Polyansky, we analyzed over 800 works and selected 200 that we thought would be able to tell the emotional story of Shevchenko’s life. One of the pieces is a painting titled Kateryna, a portrait of a young pregnant Ukrainian woman from a Shevchenko poem—it’s like Mona Lisa-level art in Ukraine. The original physical versions of these works have been preserved for centuries. They were put into storage to protect them during the Nazi invasion of WWII, and, incredibly, when Russia invaded, they were stored in the same crates, so they’re in hiding again, for the first time since 1941.

“The show is now positioned as a fundraiser and response to what’s happening in Ukraine, with all of the proceeds going to the Red Cross in Ukraine and the National Bank of Ukraine fund. So far, 5,000 people across North America have purchased tickets.

“Our team of 500 people across six production houses have been working on this for a year, but to make the new timeline possible, they’ve been at it day and night for the past two weeks. Transferring the final works on our servers over the last 10 days was hugely challenging because of the interruptions caused by war activity and slow internet. It was so inspiring to see the Lighthouse Immersive team mobilize so quickly to get all the ticketing and marketing organized. Taisia Pode and her company RockNLight adapted the show for six galleries in the U.S. and Canada. We’re now featuring it in Toronto, Los Angeles, Boston, Denver, Chicago and San Francisco. We want to share this art with as many people as possible, so an online virtual show will also be available.

“Our goal for the exhibit is to take that picture of Shevchenko that many of us remember from classrooms and turn him into a three-dimensional human being, someone we can connect with. It’s to show his brilliance, but also his everyday life. He didn’t just live through bad times: he had a lot of bright, positive moments living as a free man in St. Petersburg. He did regular things—going to the theatre, getting an education, painting—but not too many Ukrainians are familiar with that side of Shevchenko. We wanted to show him as free, creative, and at times depressed as well. The end result is an audio and visual show that takes you through the emotional journey of his life. We analyze his musical history, what he listened to, the operas he went to, his friends, including Semen Hulak-Artemovsky, one of Ukraine’s most famous composers at the time.

“Shevchenko’s message has never resonated more than it does today. What Ukrainians are fighting for right now is their cultural identity, which to me is something very warm and welcoming, like a celebration of life. They are trying to protect their art and their language. This is exactly what Shevchenko was promoting his entire life. Right now, a lot of people are looking to him and the hard life he had protecting his culture as inspiration to do the same. 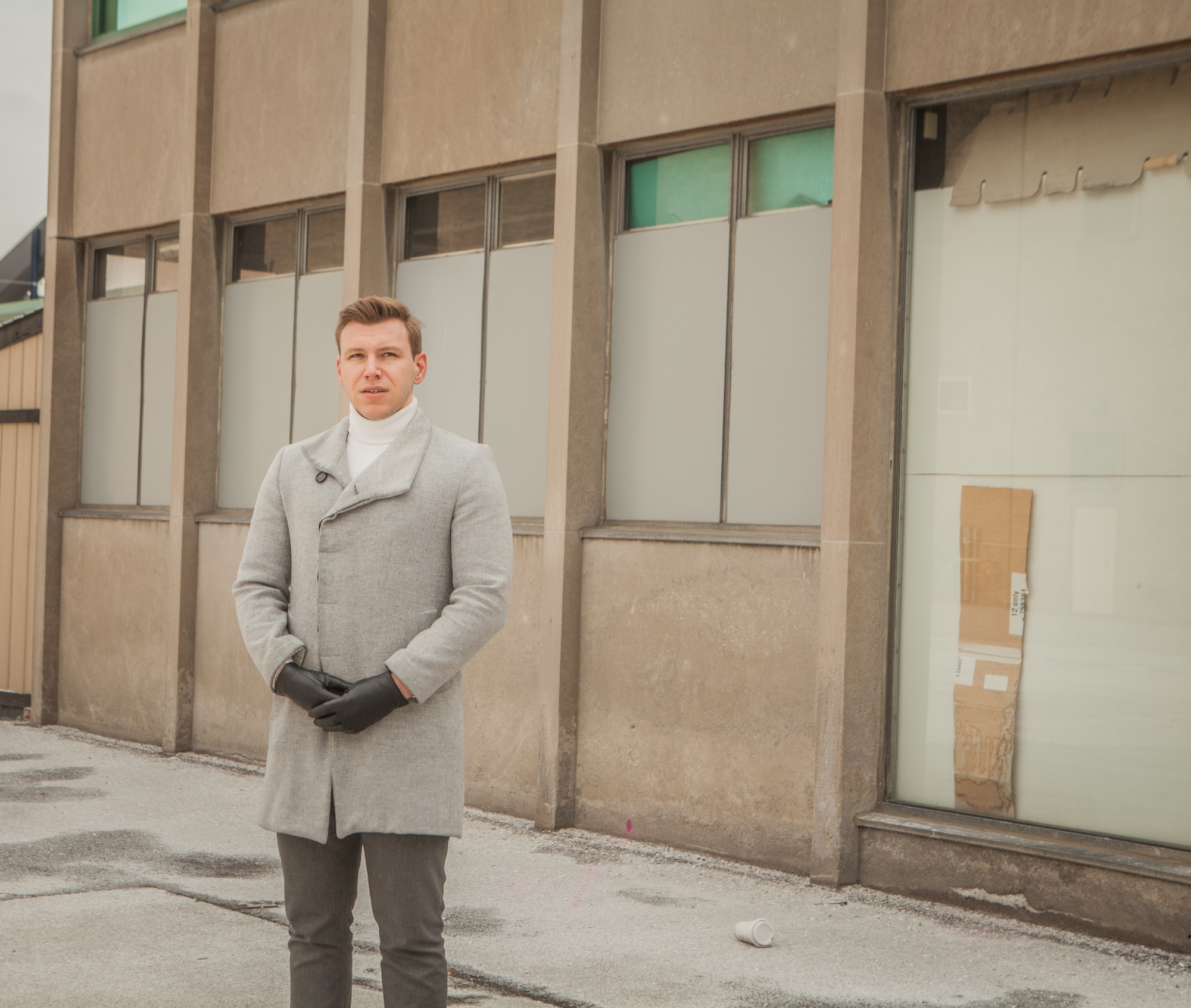 “The majority of my family is still in Ukraine—as of now, they are safe and do not want to leave Odessa. I love going back and visiting them, exchanging stories through art, plays, film and dance. I spent two and a half months there last year, but I don’t know when I’ll have the opportunity to visit again.

“At the moment, we’re communicating through a family chat. I call and check in with them about twice a day. We’re watching the news and updating each other on the situation in different cities, like where there is a bombing, or who needs to find shelter. It’s utterly terrifying. I’ll spend hours just listening to the news, feeling powerless. I’m sure many Ukrainians would agree with me on this: there is more fear in being away from home than in being there in wartime. Being away, we’re constantly wondering where our family is and whether they’re safe. I think I would be much more at peace if I were there with my loved ones right now. But here in Canada, at least we have clear skies above our heads.

“Despite the difficult times, there is resiliency in Ukraine. In the Cherkasy Region there is a small town called Kaniv, which is where Shevchenko is buried. The regional government there created a multimedia gallery so that it could host our exhibit, giving locals the opportunity to enjoy the same quality of modern Ukrainian art as people in large cities like Kyiv, Odessa and Lviv.

“The other day, someone asked me, ‘What if Russia wins?’ I don’t know what I would do. I could not imagine my Ukrainian town as anything other than the happy city that it is. Odessa is known for its unique sense of humour—there’s even a saying that Odessa is the humour capital of Ukraine. It’s unfathomable to me that it could be attacked and reduced to rubble. Not only because my family is there, but because my memories of my hometown are a great part of who I am, as much as Ukraine is a part of who I am.”