Over the weekend, summery temperatures summoned scores of Torontonians to Trinity Bellwoods, where they lazed about on picnic blankets, obsessed over board games and huddled around Spikeball nets. It should come as no surprise that plenty of parkgoers brought alcoholic beverages to enhance the experience. Here’s the thing: city hall recently voted to uphold a ban on outdoor drinking in parks, which carries a fine of $300. So we slathered ourselves with sunscreen, adjusted our bucket hats and ventured to Bellwoods to get people’s opinion on park prohibition. 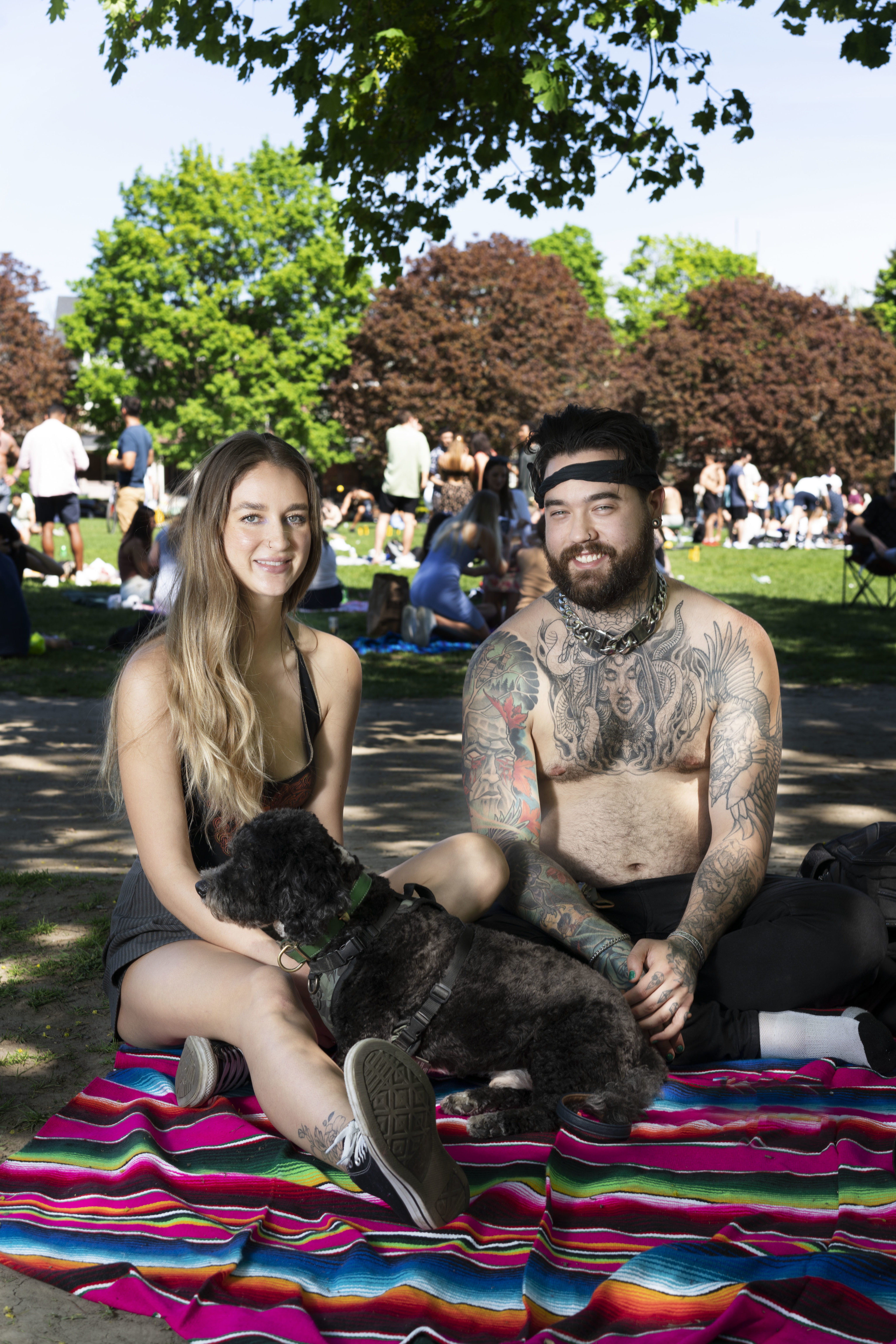 What’s your drink of choice?
Jess: I like a margarita—it’s tart and fresh. I also love sangria.

What do you think of the ban on park drinking?
Jess: I just don’t see what the problem is, people have been drinking in the park forever. I guess my counter-argument would be that, because of Covid and the hit the restaurants have taken, we should go promote local businesses and drink at their patios.

Nick: We should definitely be allowed to drink in the park. It’s an inevitability, people have done it for years and they’re going to do it anyway. Some might complain about the noise, but for the most part, parks here are contained and serene, just like today.

What do you enjoy about being able to drink in the park?
Nick: It’s cheaper than drinking in a restaurant, it’s social, and we have so much winter here that when it gets nice, patios gets packed. This is more accessible and communal.

Nick: No, because there is no way they could enforce that. Are you going to employ a police presence to do that? I think having more cops around watching people at a park would be a misuse of power and money, and I don’t think it would solve anything. How often does something happen at the park that requires policing? Look around—people are hanging out with their dogs, playing Spikeball. There’s nothing nefarious happening here.

What do you think of the $300 ticket?
Jess: It’s not fair. If you travel to 95 per cent of the countries in the world, you can buy a beer and walk around the street with it. It’s pretty standard. But here we have all of these regulations that don’t make sense.

Nick: Well, it’d be a big paycheque for the city if they found everyone in this park right now.

What’s your drink of choice?
A classic beer, but not an IPA. Anything that’s a wheat ale.

What do you think of the ban on park drinking?
I’m not in favour. We should be allowed to drink in parks. I’m biased because I used to live in Montreal, and I never saw it having a negative impact on park or city life. There, you could drink as long as you had food. It was kind of an unwritten rule. It made for a fun environment, because it brought food vendors to the park.

Should there be a limit on how many drinks you can have?
No. I think it’s better to encourage smart consumption, like that rule of having food with you. That way, people aren’t constantly checking on you to see how much you’re drinking.

What do you think of the $300 ticket?
The fine is too much, it just shows they’re more concerned about the money. And, in general, if people have substance abuse issues, they probably can’t afford a $300 charge.

Why do you think people might want to drink in the park instead of in their backyards or on patios?
I think it’s just an agency thing. Patios are nice, but way more expensive. Also, some people don’t have a backyard, or they do, and the raccoons have taken over.

What do you think of the ban on park drinking?
I don’t see why it shouldn’t be allowed. I get it, kids are also at parks, but it’s the same thing as smoking cigarettes—if people are going to do it, they’re going to do it. When they legalized marijuana, it didn’t incentivize people to do it more, it just allows people to do it legally.

What do you enjoy about being able to drink in the park?
The space and the company. I like to be among friends. I’m not much of a mid-day drinker, but the main thing is just to have the option of being out with a group and enjoying a cold beverage. We can’t just expect that people will do that in their backyards, because it’s a privilege to even have one in the city.

Should there be a limit on how many drinks you can have?
I’m not sure. I don’t know if people should be allowed to sneak vodka bottles into the park and take shots, but I also feel like if you legalize it, there won’t be as much of a thrill to doing that.

What is your drink of choice on a summer day?
A nice cold Stella on the patio.

What do you think of the ban on park drinking?
People are going to drink here regardless, so why not just legalize it and make it more organized? It’s just about the freedom to let people drink where they want. If people are going to do it anyway, why not give them the liberty do it where they don’t have to feel paranoid about it or feel like they have to do it in an inconspicuous way?

I was born and raised in Toronto. Pretty much everywhere I’ve gone on vacation, drinking in public spaces was allowed and it’s amazing. Days like today feel like a one-day vacation, minus the fact that we have to look over our shoulders for police if we’re drinking.

What do you think of the $300 ticket?
Too much. Where do they get that number from? It’s ridiculous. There is no policeman who’s going to stop you for smoking weed. What’s the difference?

Should there be a limit on how many drinks you can have?
A limit might not be a bad idea. I do think responsible drinking might be enforceable to a degree, because if they do legalize it, some people will take advantage of it and be wasted at the park every night, every day. So obviously we have to find some sort of medium.

What’s the proper balance?
There is no way that we can define that now. It has to come over time. But to find the right balance, we need to allow people to test it and adjust accordingly.

What’s your drink of choice?
I just had a grapefruit radler. They’re good and refreshing in the summer.

What do you think of the ban on park drinking?
I think we should be allowed to drink at the park. If we don’t allow it, we’ll have a big police presence around, which could have a negative impact on some demographics in particular. If people with substance abuse issues don’t have a safe place to drink, and they have to rely on public space to manage their addiction, you’re going to end up over-criminalizing certain people. Then it’s just a cycle of criminalization.

What do you enjoy about being able to drink in the park?
You can bring food, it’s cheaper, there’s more community connection and the possibility of meeting new people.

What’s your drink of choice?
Nancy: I’m a juice girl. The raspberry iced tea from Rooster coffee house is my favourite. It’s real tasty and keeps you hydrated in the heat.

Christian: A Corona with a lime.

What do you think of the ban on park drinking?
Nancy: I feel like if people are going to cause a ruckus, they will do that despite the rules or the mandates.

Christian: I think drinking in the park is fine. The majority of people are just coming for a good time, not to get super crazy and disturbing. So I don’t know what the city is worried about.

What do you enjoy about being able to drink in the park?
Nancy: In the summer, you don’t want to be at home, and maybe some people don’t want to pay to go to a restaurant.

Christian: You might not have enough room in your backyard to host people.

Should there be a limit on how many drinks you can have?
Nancy: Honestly, if they need to put a limit or restrictions so that things don’t get out of hand, I feel like that’s not a bad idea.

What do you think of the $300 ticket?
Christian: That’s a lot to have a drink at the park. It’s kind of ridiculous.

Enough to deter you to have a drink?
Christian: I don’t know. If I put it in a bottle nobody is going to know. There are so many ways to get around it anyway, so why not make it legal and put restrictions on how much you can have, instead of having people sneak things in? That might work best.