“The borders closed after our second date”: How this cross-border couple kept their romance alive during the pandemic

“The borders closed after our second date”: How this cross-border couple kept their romance alive during the pandemic 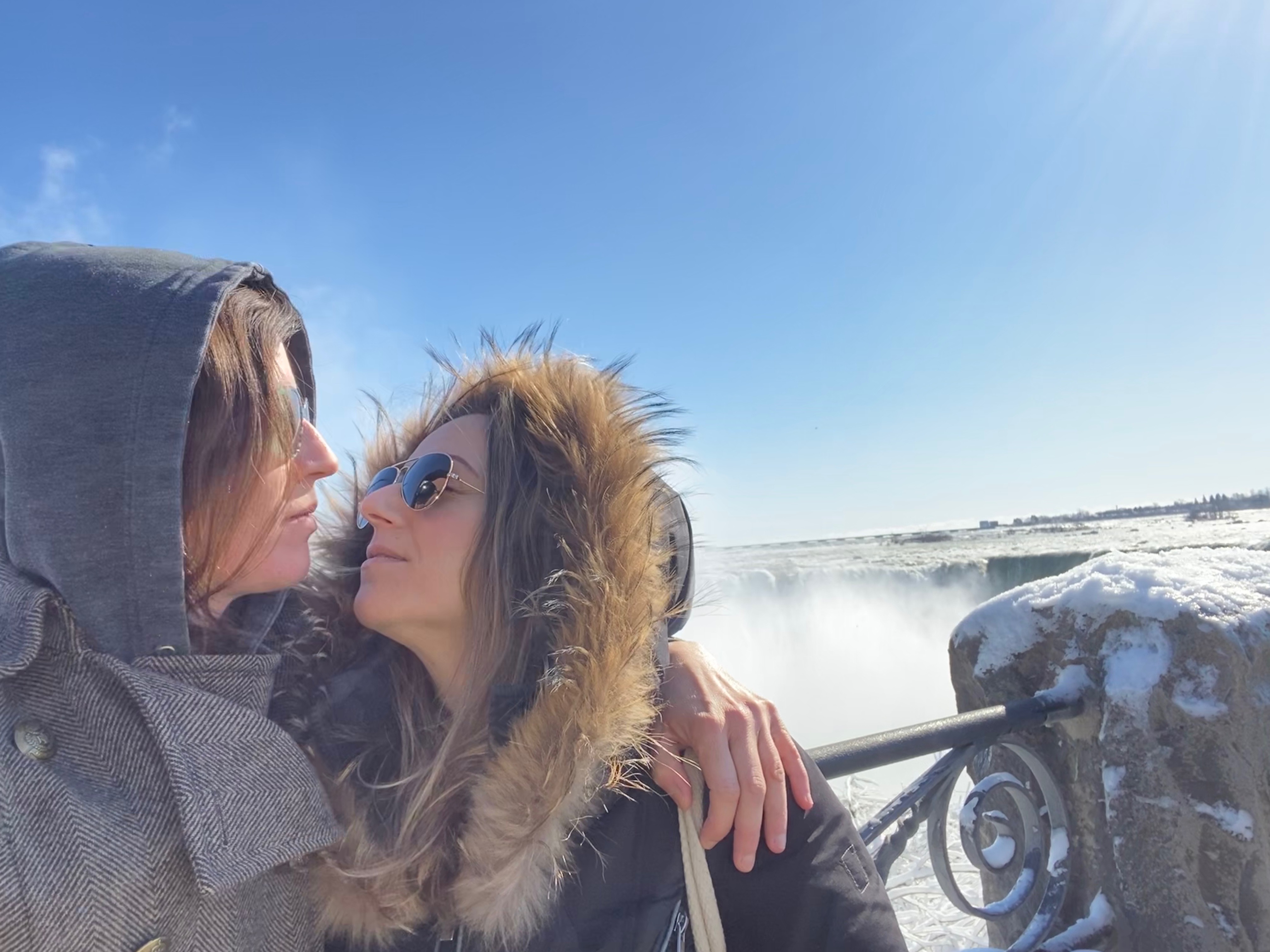 Last summer, the Toronto-based PR pro Jessica Nudo matched on Hinge with Silvia Lopez, a lawyer who lives in New York state. Silvia visited Toronto in March and returned home to the U.S. the day before the Canadian borders closed. Here, Jessica describes how the couple’s romance blossomed and how they are keeping their relationship alive while living apart.

“I was born in Montreal but I moved to Toronto at the end of 2017. I was just launching my business in PR for the cannabis industry and I realized that Toronto was the place to be. Many friends told me how hard it was to date in Toronto because people often aren’t serious about getting in relationships here. I figured, there are six million people. It’s not going to be a problem. When I arrived, I was meeting people at friends’ birthdays and park meet-ups, and I was using the apps, mostly Hinge. But it was challenging to meet someone who wanted the same things I did, someone who had their shit together and a clear direction of where they were heading. Men often ghosted me repeatedly, or broke things off once it was starting to get serious. It turned out my friends were right.

“I realized I needed to broaden my horizons. I’ve dated women in the past, so last summer I decided to change my Hinge settings to include women in my search results. In August, I got a like from Silvia Lopez. She had this nerdy lesbian librarian look with attitude. I was like, Oh yeah, I can get down with this. She was based in Rochester, but I figured that wasn’t too far away.

“We hit it off immediately on Hinge. She was funny and thoughtful and such an amazing listener. I was impressed with her principles, and how she puts her heart and soul into everything that she does—she became a criminal defence lawyer to stand up for people who had been done dirty by the system. We both want a better world and a better society, and we bonded over that.

“Over the next month, we messaged each other constantly. Silvia was curious about my career in cannabis, since it’s not federally legal in the States, and she was excited to come up to Toronto and explore the Canadian cannabis scene. We had so much in common: we both love hiking, road-tripping and being by the water. We’re both recovering Catholics who grew up in semi-religious families. Whenever we talked, I became more convinced that this could be something serious. The first time we spoke on the phone, it felt like we’d known each other for a lifetime. Every day, my feelings for her deepened.

“We never officially talked about being in a relationship. It kind of just happened after a couple of months. We both lost interest in seeing anyone else because we could tell that there was something special between us. I’d been single for five years by the time I met Silvia because I was waiting for something real and somebody worth my time to come along. I knew Silvia was it. By this point, we were talking on the phone a couple of times a week, usually for one to three hours at a time, and texting and emailing regularly.

“In February, we finally found a weekend that we could meet up in Niagara Falls. Silvia booked us a room at the Embassy Suites overlooking the falls. She drove up from Rochester and I took the GO train from Toronto. When I walked through the lobby doors, I saw her standing there, waiting. It felt like a scene out of a movie. She ran over and gave me a hug. I thought, Okay, this is my human right here.

“When we were going up the elevator to drop our bags off, Silvia pulled out two hotel key cards. She said, ‘I got two keys just in case we fight. And there are two beds. I laughed and thought, that is such a lesbian drama thing. It meant a lot to me that she wanted to make sure that I wasn’t going to feel uncomfortable if the chemistry was off.

“But that wasn’t going to be a problem. It was on. We had our first kiss just after lunch. It was amazing to finally express physically what I felt for Silvia emotionally, and I felt the fireworks right away. The chemistry between us was explosive.

“We only had the weekend together, so we made the most of it and did all the cheesy touristy stuff in Niagara Falls. We had lunch overlooking the falls, went to the butterfly conservatory and we rode the SkyWheel. The next day, we sat by the falls, taking a few pictures before I had to catch my Uber to the train station. The weekend had been such a high, and I was bummed that it was over. But I knew I wanted to see this person again.

“We booked our next visit for the weekend of March 13. Silvia was going to drive up and stay with me in Toronto. When the pandemic became a big deal on March 12, I panicked. We thought about cancelling the trip, but Silvia still wanted to come. We had a wonderful weekend exploring my neighbourhood and spending time with each other. We began discussing the logistics of our relationship and how to bridge the gap between our respective cities. We even discussed the possibility of renting out a parking space in my building for Silvia’s visits. We didn’t talk about the pandemic. It felt like we were in our own little bubble. She drove home on Sunday. Shortly after she got home, the Canadian border closed.

“I was devastated when I heard the announcement. I’ve done long-distance before, but not for this many months and not across a border. And yet despite the border closure and not seeing each other for eight months, we remained closer than ever. I still feel like I’m in a strong, committed relationship. It’s something that I’ve never experienced before, even in relationships where we lived in the same city. Because we’re separated, we can’t rely on physical chemistry—we have to communicate constantly, and make sure we’re both putting in the effort. We speak on the phone every day, sometimes for as long as three hours, and it seems that we never run out of things to say to each other. Living through a global pandemic, where we’re confronted with our mortality on a regular basis, has helped crystallize what’s important in life and how we want to spend our time. Silvia is what’s important to me.

“There have been some ups and downs along the way. Around July, our hope for a reversal on the border closure began to dwindle. We had no idea when we’d be able to see each other again. So I brought up the possibility of opening up the relationship. Non-monogamy was something that I had thought about in the past. Silvia was against the idea, but she was willing to consider taking a break so I could see what it would be like to date other people. The idea of breaking up, even temporarily, was terrifying for me, and made me realize that Silvia was everything I could ask for. The thought of being with anyone else, even given the circumstance, suddenly seemed ridiculous to me. Those conversations were difficult and uncomfortable, but they strengthened our relationship. They forced us to figure out how to talk about awkward stuff and always be honest with each other. No matter how painful the conversations became, they were always respectful and loving. Almost losing Silvia made me realize how much I cared about her.

“We’ve tried to keep our romance alive in creative ways. Early on in the pandemic, we did Netflix Party sessions in the evening. I got her hooked on the CBC show Workin’ Moms, and every night, we would watch a couple of episodes or a movie together. We’d snuggled up in our own beds with popcorn and a cup of tea. We’ve done group Zoom calls with each other’s family and friends so we’ve been able to meet loved ones from a distance. And every so often, Silvia sends me a little gift. One time, I complained about my phone charger dying and Silvia sent me a wireless one.

“Silvia was also so supportive when my grandmother’s health was declining. She’s 91, and she’s now in palliative care. She and the rest of my extended family are still in Montreal, so it was heartbreaking to be stuck in Toronto for the first few months of Covid and being separated from them. Silvia was on-call at all hours to support me during that tough time. She was a calm refuge during an otherwise tumultuous year. Talking to her after a rough day made the chaos a little easier to handle.

“We have a long-term plan to be together after the pandemic. I’m thinking of moving closer to the border, maybe to Hamilton or Stoney Creek, and Silvia will go back and forth to keep up her law practice in Rochester. Travel-restriction exemptions are available for couples who’ve been together for more than a year, so we’re applying for one so Silvia can visit me. Until then, we’re sending good morning and goodnight texts every day. I don’t feel any insecurity or mistrust, even though we’re not physically together. Despite being separated by the border, she’s a bigger part of my life than any other partner I’ve ever had.”