Being the daughter of an international supermodel comes with some pretty sweet perks: tagging along to photo shoots, roaming the set of Project Runway, visiting Iceland, Paris and Portugal. In 19 short months, Ioni Conran, toddler to Toronto-born supermodel Coco Rocha and husband James Conran, has done more than most people do in their entire lives—and amassed 52,000 Instagram followers in the process. Here, we round up the 20 most outrageously adorable, envy-inducing snaps from Ioni’s charmed childhood.

All moms look this good before giving birth, right?:

The time is right to make my grand entrance. ?

Mom with her newborn. Remember this photo—it’s the last time Ioni’s babyhood will resemble yours in any way:

"I always feel like, somebody's watching me…" ?? #IoniConran #Rockwell #Creeper

Told ya. Here she is looking impossibly perfect next to a mini–botanical garden:

Thanks for all my flowers everybody! ?????and uncle @Zac_Posen for my tree!! ?

Mozart wrote his first symphony when he was eight years old, you say? Ioni rocked her first bowtie when she was just six weeks:

When your mom dresses you like you bout to go to your first #MetGala and then tells you it was 5 days ago. SMH ?

Sorry @NinaGarcia, one day you're in and the next, you are OUT! Live from my new gig at @ProjectRunway.

Rolling with the homie #bebemorel during #NYFW. #SquadGoals

This one’s more fun if you imagine Ioni as a Godzilla-sized menace wreaking cute, cute havoc on the City of Light:

We’re not exactly sure what she’s wearing, but we’re willing to bet it costs more than anything in your wardrobe:

Hanging with the mama at @pier59studios.

Putting their faces on:

Showing Aunty @veronicachu how you do hair and makeup! ???

Here’s one with dad, featuring a dress that was a gift from Suzanne Rogers (and a look worthy of Zoolander):

When you accidentally turn on the front camera ??. Thanks to Aunty @SuzanneRogersToronto for my new dress!!

Here’s where the serious travelling begins. This one is in front of Iceland’s majestic Seljalandsfoss:

The biggest shower I've ever seen!! ?

Another casual vacay pic from Iceland:

Then, off to somewhere warmer—Saint-Tropez, France:

You know, just wandering around an enchanting, historic, cobblestoned port city in France:

When your uber arrives ?

After a long day of beaches and helicopters, she likes to relax in what looks like some sort of fancy thermal spring:

This one’s from Sesame Place Amusement Park in Pennsylvania. Ioni loves to do Normal Things like Normal People:

Scratch that. Here she is with artist-philanthropist Mohammad Sultan Al Habtoor in Dubai: 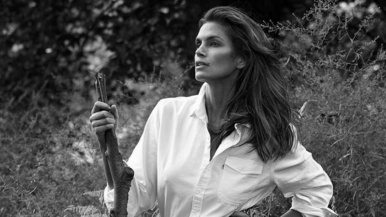 Some pictures of Cindy Crawford cottaging in Muskoka 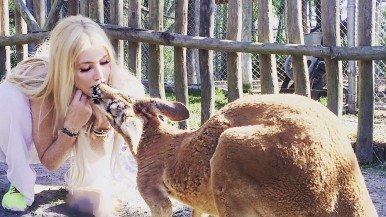 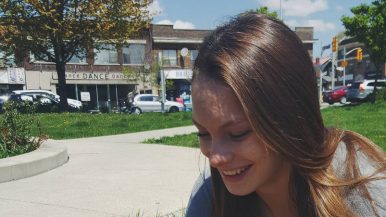 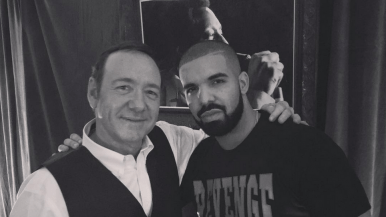