“Sometimes I’d start crying from the hormones, sleep deprivation and stress”: Why these new parents fled the city for rural Ontario

“Sometimes I’d start crying from the hormones, sleep deprivation and stress”: Why these new parents fled the city for rural Ontario 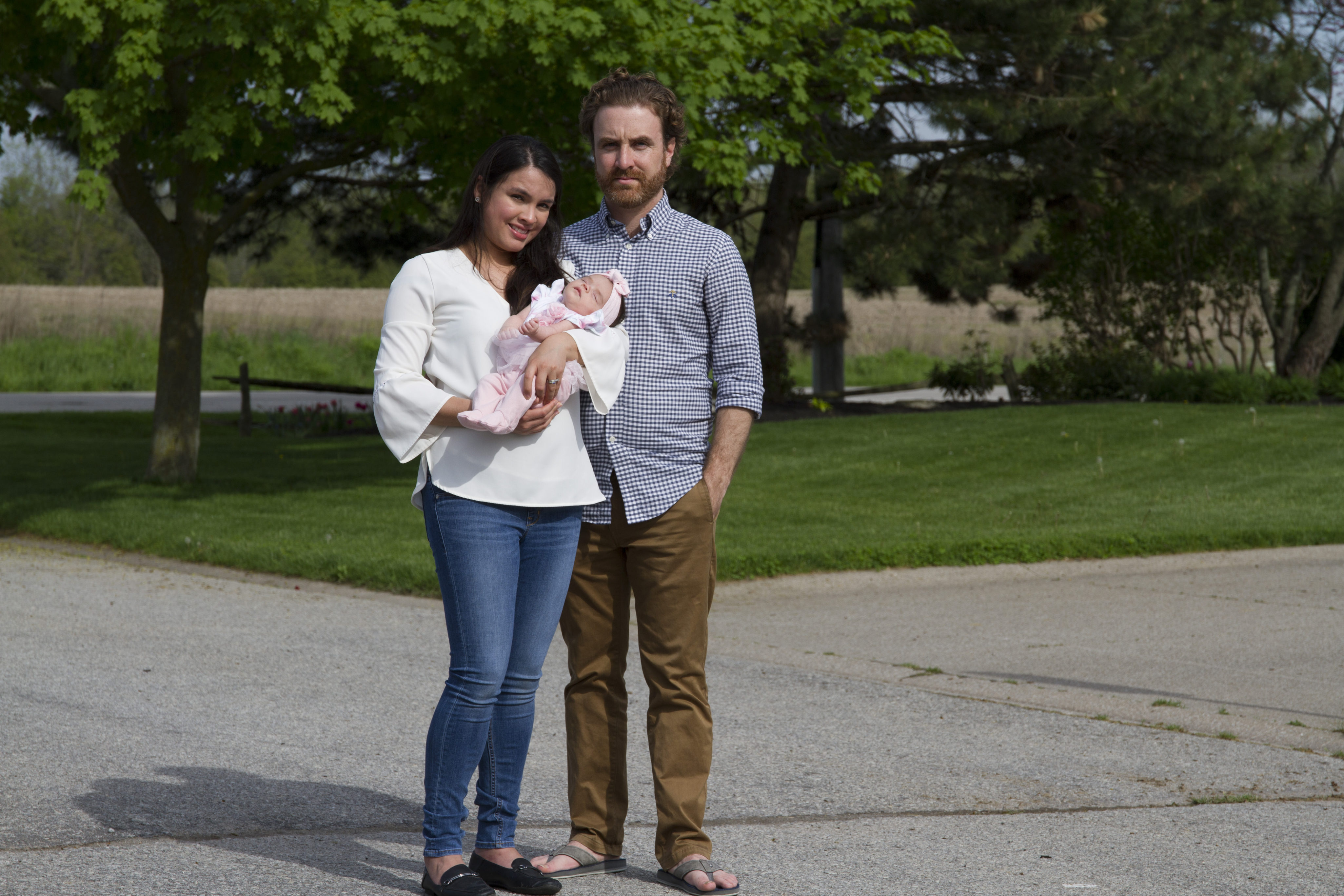 My husband, Nate, and I always planned to wait before having kids—I’m 30, and he’s 32, and we figured we had time. Then, last July, I found out I was pregnant. It was a big surprise, but a happy one. I called my mom right away; she’d always wanted to be a grandmother, and she was thrilled. I loved being pregnant. I went to prenatal yoga, and my colleagues at Scotiabank, where I work as a business analyst, were encouraging and supportive. My family lives in Nicaragua, and my mom booked a flight right away. She planned to be here for a month after our daughter was born, and my brother would stay for two weeks.

I got sick at the beginning of January, right as the news about virus was ramping up. I had a fever, headaches and my body was aching. I have asthma, but usually as long as I have my inhaler, it’s not bad. This time, my inhaler wasn’t enough, and I was struggling to breathe. My doctor asked me a bunch of questions about my symptoms, but I didn’t meet the criteria for a coronavirus test because I hadn’t travelled recently. She told me I had a cold. I took a couple of days off work, and worked from home for the rest of the week. It took me two weeks to recover completely. I don’t think I had the virus then—I don’t how I could have caught it—but the whole experience made me terrified about what might be coming. I hadn’t been sick like that in years, and couldn’t imagine how bad it would be if I did contract Covid. Back at work, whenever anyone coughed or sneezed, I got nervous. My subway commutes were nerve-wracking, as I was forced to cluster up against other people with no space to distance if someone had symptoms. And we didn’t know then how the virus could affect babies. I really didn’t want to get sick.

Around the time the peak hit in Ontario, I learned that my baby was small, and that her umbilical cord had attached itself to my placenta, causing an abnormality called a marginal cord insertion. My doctor said I might require an induction before my due date. Starting in March, I was monitored at Mount Sinai Hospital’s clinic once a week. At first, we were screened at the front doors, and Nate and I went in to see the doctor together. The next week, I was told Nate couldn’t come. I was screened outside, but people were still standing close together. The week after, there were signs indicating that we weren’t allowed to stand near other people.

I was scrolling the Internet like crazy, looking for information about pregnant women who got Covid. I read a few articles that said the baby wouldn’t be affected, but I couldn’t find information that seemed accurate. All I could do was be as careful as possible. I washed my hands until they were raw, and used hand sanitizer constantly. I asked my manager if I could work from home before the official order came down, and he agreed. I stayed indoors for days at a time, not going outside at all for nearly a week straight. My doctor’s secretary told me there was nothing to worry about, but that didn’t make me feel better. My due date was April 7, and they scheduled my induction for April 2.

A week before my induction, Nate was laid off from his job as a development manager at a residential developer. It added a layer of incredible stress to an already stressful situation. He began to have trouble sleeping, lying awake at night, worrying about how we were going to pay for everything. I’d tell him not to worry, that he’d get his job back, that the government would help, but we didn’t know what was going to happen. We were still hopeful my mom would be able to come: at the beginning, Justin Trudeau had said that close family could still come into the country. I had a spot in our apartment set up for her to stay, and I was so excited for her to meet our daughter. I knew she’d come with a suitcase packed full of my favourite treats from home, too, and traditional clothes for the baby. Then, during the first week of April, my mom got a call from her airline informing her that her flight was cancelled. I was so upset: her absence during this time has one of the hardest parts of all of this.

On April 2, I went to Mount Sinai to be induced, and the next day I came back to deliver. I was admitted quickly, and they put me and Nate in a labour room. I trusted the hospital and my doctors, but I was still nervous about coming into contact with the virus. I asked our nurse if she knew of any pregnant women who had coronavirus. She said there were cases, but quickly changed the subject, And describing what was going on in my body as a way to calm me down. It worked. My contractions felt like deep, painful period cramps. Eventually, the pain became too intense. When the contractions were four minutes apart, I asked for an epidural. At round 2:30 a.m., my doctor told me it was time to start pushing. I pushed for seven minutes, and out came the baby. I cried when I saw her. She was tiny—just five pounds and five ounces—and perfect. We named her Isabella. 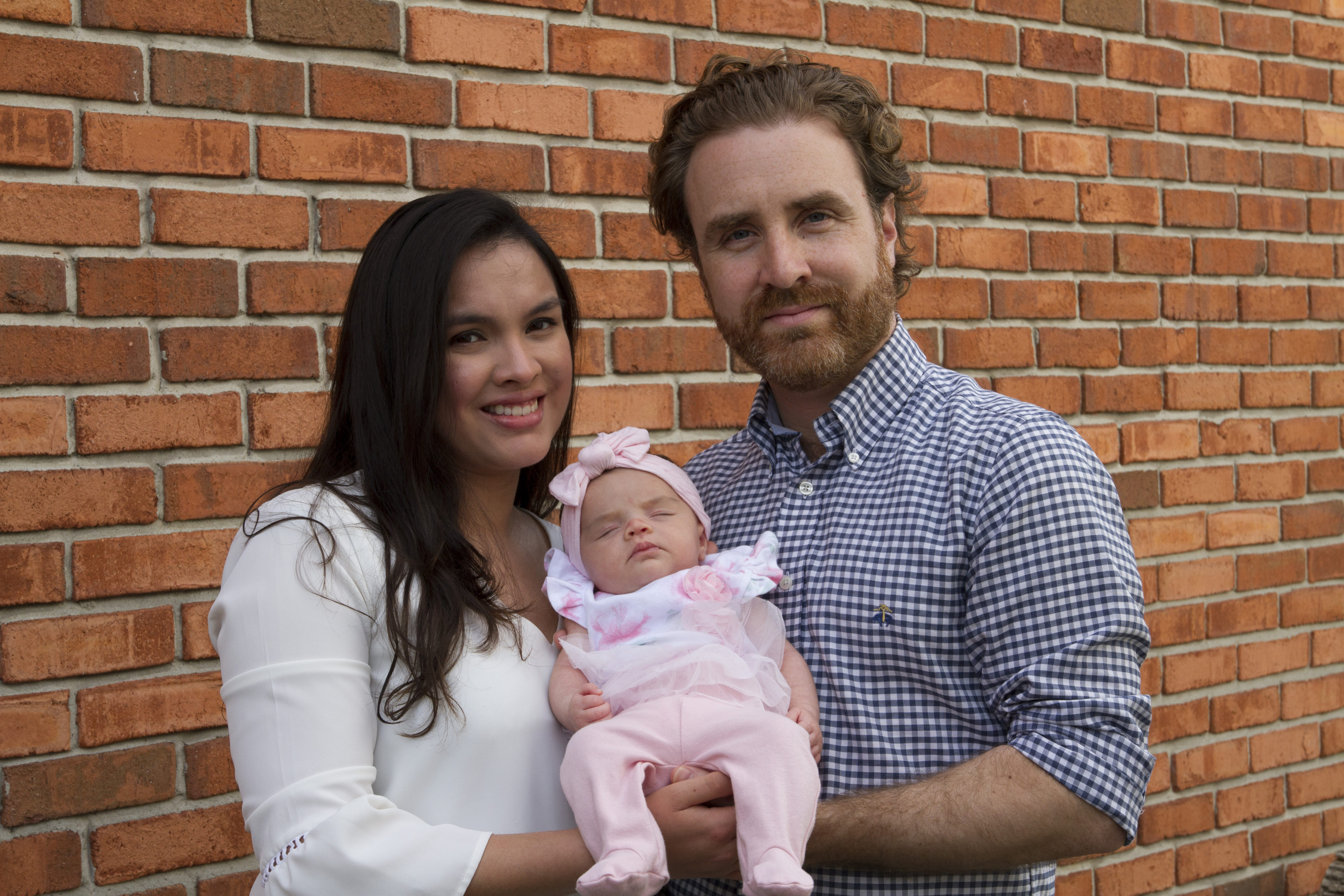 As they handed her to me, Nate took pictures and sent them to our families. I remember thinking that a vaginal birth wasn’t as difficult as I thought it would be, and that everything looked a little more beautiful to me. After the doctors stitched me up, one of the nurses told me I had a fever, and they were going to monitor me closely to make sure I didn’t have coronavirus. My heart sank. Everything I’d feared seemed to be coming true. They came to check on me every two hours, taking my temperature and asking how I felt. My fever lifted, so I didn’t need a virus test, but I was still on edge. Nate was struggling to find food in the hospital. They provide food for the moms, but not the dads, so he had to stand in line at Second Cup or Rexall to get what he could. He missed lunch on the Friday, and the next day he only ate when one of the nurses snuck him a sandwich. By Sunday at noon, we were both glad to be going home.

When we got back to our apartment, it was total chaos. We had no idea what to do. We didn’t know why she was crying when we put her down to sleep, and I was having trouble breastfeeding. When Nate had to go out to get a smaller bottle for her, I got scared. I knew my immune system wasn’t as strong as it once was, since I’d just given birth, so I worried that I was at higher risk than before. He was going to a pharmacy, where sick people go. What if the virus got onto his coat and he brought it home? I’d been careful with everything we brought to the hospital, washing each item thoroughly and making sure we weren’t using anything we’d brought in. But every day, the news was getting scarier, and I was panicking. Sometimes, I’d just start crying—a combination of hormones, painful physical recovery, sleep deprivation and the stress of the virus. I got depressed, and I’d ask Nate, “Why is this happening? Why is this so hard?” I had imagined such a different maternity leave, one where I could go outside, where I didn’t have to disinfect everything all the time. To do laundry, we had to take an elevator down and go through a bunch of doors, which involved touching things other people had touched. If we wanted to go out for walks, we had to take the elevators again. On top of that, I couldn’t go to any stores. I had a few newborn clothes but not enough because she was so small, so we were doing laundry all the time.

Before Isabella was born, Nate’s parents had suggested that we come stay with them in Jordan, about an hour and a half outside Toronto, after she arrived. At the time, I didn’t think it would be necessary. But after spending four days in our apartment with her, on four hours of sleep a night, Nate and I decided to move to his parents’ house. We knew it would make everything easier: they had trails around their town so we could go for walks, and they could help us with Isabella. His mom had even kept a stock of baby clothes from when Nate and his sister were young, so we’d be able to use those.

I was worried about coming from a virus hub like Toronto to a smaller town like Jordan, especially because Nate’s parents are in their mid-60s. But as soon as we got there, all I felt was relief. We’ve been able to go for long walks and drives with the baby, and Nate’s parents help with the cooking. They even watch her so we can take occasional naps. A month after we arrived at his parents’ house, Nate was hired back at his company, which was perfect timing. He was able to spend those five weeks with Isabella and me, and then go right back to work. One of our new neighbours heard that we needed clothes and dropped off an enormous bag filled with hand-me-downs on the front porch. And every day, we try to have dinner as a family, coordinating with the baby feedings. So far, 7:30 seems to be the magic hour when we can all sit down together. We feel so lucky to be here, though we don’t know yet how long we’re going to stay—as long as we can, I think, until it feels safe to be back in the city.

I miss Toronto. That’s home. I imagine going for walks with Isabella in High Park, and smile to myself.  I don’t know if things like restaurants will come back for this summer, but I’m on mat leave for 18 months, so I’m looking ahead to next year already.