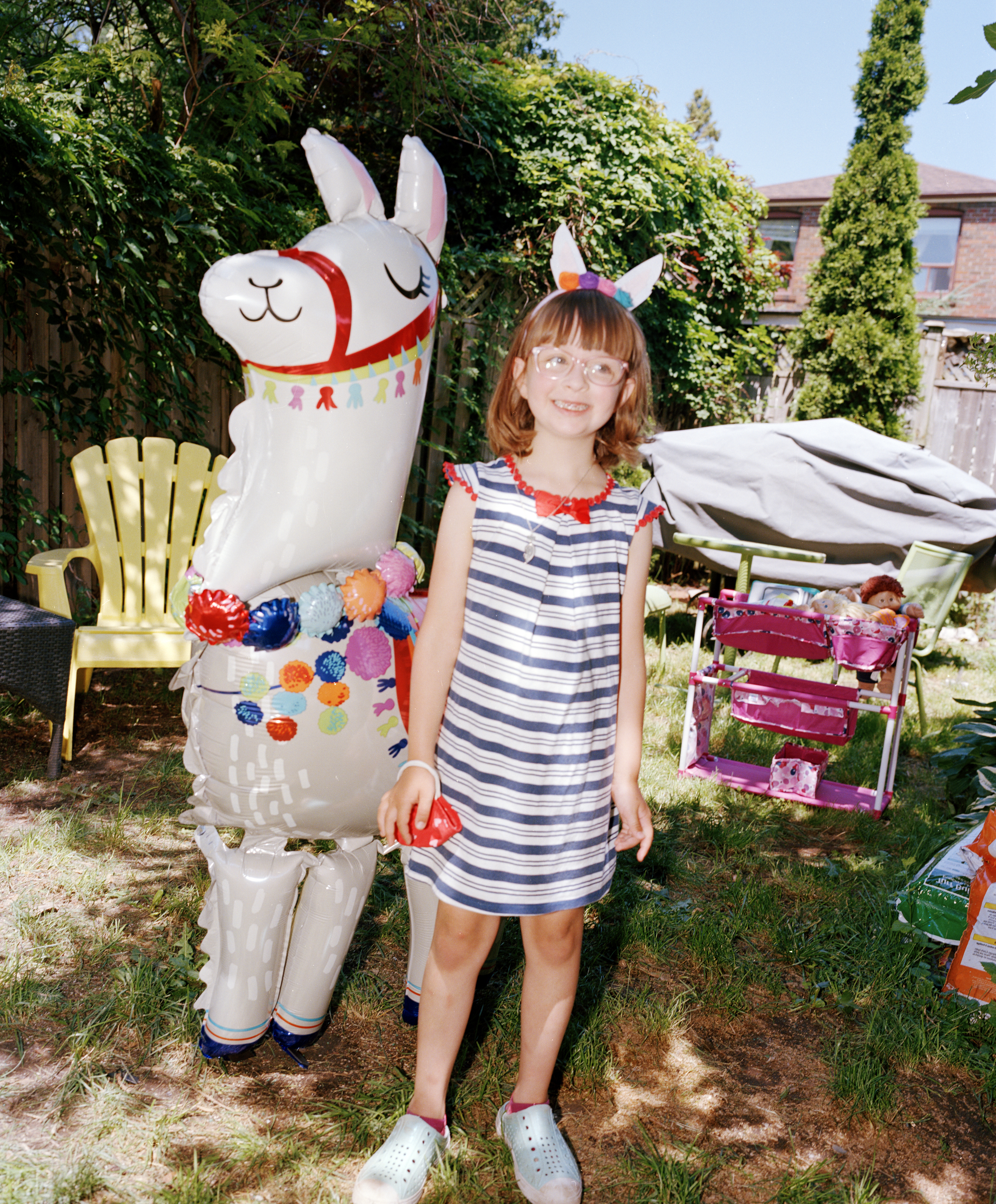 Eric Wood, a hospitality consultant, his wife Stephanie Burke, a primary school teacher, and their seven-year-old daughter Nora hadn’t seen Eric’s parents, who live in Nova Scotia, since October 2019. In June 2021, after both families were double-vaxxed, they reunited during a joyful backyard celebration for Nora’s seventh birthday. Here’s how it all played out.

“I moved around a lot before settling down in Toronto in 2010 to work as a chef for a large restaurant group. The following year, I met Stephanie. We got married in 2013, and a year later, Nora was born. Most years, we went out to visit my parents in Nova Scotia for a week or two in the summer, and they’d come visit us in Toronto for Thanksgiving. When we weren’t all together, Nora would FaceTime her grandparents a couple times a week. They were very close. My mom is very doting, and loves to tell Nora stories—their favourite is one about a toy maker. My dad is the quiet, reserved type, but he loves Nora to pieces: he built her an awesome playhouse on their property in Nova Scotia.

“In October 2019, my parents came to Toronto for Thanksgiving. That was the last time we saw them before Covid. During the pandemic, we FaceTimed my parents every day, usually before or after dinner. It was a great way for Stephanie and me to catch a breath and get a break. By June, Nora was getting comfortable using the tablet—virtual schooling did wonders for her tech skills—and she started calling my grandparents on her own. Sometimes they’d talk a couple of times a day, anywhere from five minutes to an hour at a time. Nora’s favourite activity is playing with dolls, and they would play dolls virtually. They’d also create imaginary worlds. Nora would spend hours inventing names of people, and their aunts and cousins, and telling my mother where they went and what they did. They even did story time together so Nora could work on her reading skills. Nora didn’t get a lot of social time with friends over the past year and a half, and my mom stepped up to help fill the void. The pandemic helped deepen their relationship.

“In 2020, of course, our usual summer and Thanksgiving travel plans were cancelled. It was hard on all of us. I felt like I had nothing to look forward to. I really missed them. For Nora’s birthday last July, we did a cupcake drop-in with our Toronto family, which consists of Stephanie’s parents, sister and relatives. I could tell that Nora really wanted to hug everyone, but she knew the rules and was conscious to stay safe. We did present drop-offs and delivered cupcakes from a distance. About eight people visited us in scheduled time slots throughout the day.

We were thinking of doing another cupcake drop-off for Nora’s seventh birthday this year. But by mid-June, all the adults in our family had been scheduled to get their second vaccine. Factoring in the two weeks post-jab, that would mean we’d be fully immunized in time for Nora’s seventh birthday. Stephanie and I thought we could host a birthday party for our Toronto family in our backyard in East York. Everything would be outdoors, and we’d stick to gathering guidelines.

“A few days later, my mom asked if she and my dad could come for a visit at the end of June. I was over the moon. It was perfect timing for Nora’s birthday. I was ecstatic. But we were so worried it would get cancelled, we didn’t tell her until the week before. I asked her, ‘Would you like it if Grandma and Grandpa came for your birthday?” It took her a second to process it, but she was ecstatic. She immediately called her grandma to talk about the trip and started counting the days down on a calendar.

“My parents found an Airbnb in Riverdale, not far from our home in East York. After they dropped their bags off, they took the streetcar to our house. Nora wanted to wait for them on the front porch, then that became waiting out on the street for them. When I first saw them coming, my eyes teared up. Our block is pretty long, so we could see them when they were just a blip of colour in the distance, but even from that far away, I could recognize that it was them. We started walking towards my parents, and Nora asked if she could hug them. She wanted to wear her mask, to be safe. I could see my mom’s eyes filling with tears. It was pretty amazing to see them hug for the first time in almost two years. I kept pinching myself—just being around my parents seemed dreamlike. A lot of weight and worry was lifted when we got together again. It was like we’d let out a collective sigh.

“I could tell that Nora was so excited to see her grandparents. She was the Tasmanian devil out of the gates, and my parents did their best to keep up. While we were getting dinner ready, Nora was busy showing them all her new things in the house, like her new shoes and her big-girl backpack. She learned to play the piano during the pandemic, and my parents have been treated to hundreds of virtual recitals, but she was really excited to play them a song in person. I think she played “Ode to Joy” and some other exercises from her piano book.

“My parents were just soaking it all in. I could tell they were excited by the fast-paced show-and-tell, if a bit overwhelmed. We spent the next day together, wandering around Riverdale Park and exploring the outdoor picnic and patio area at Gerrard East Market. The day before Nora’s birthday party, my parents came over and took her to the park while Steph and I got things ready for the party.

“At first, we planned to have people over in shifts because the outdoor gathering limit was 10 people and we wanted to invite 20. But then, a few days before the party, Ontario entered Step 2, and the limit was raised to 25. The guest list was mostly adults—Stephanie’s parents, sister, aunts, uncles and my parents. We started the party at 2 p.m., just after lunch. That way, if people didn’t feel comfortable eating, they didn’t have to. But we did have individual cups of chips, pretzels, fruit, and vegetables and dip ready. We also had a cooler of beers, White Claws and canned Caesars so people could help themselves to a drink. 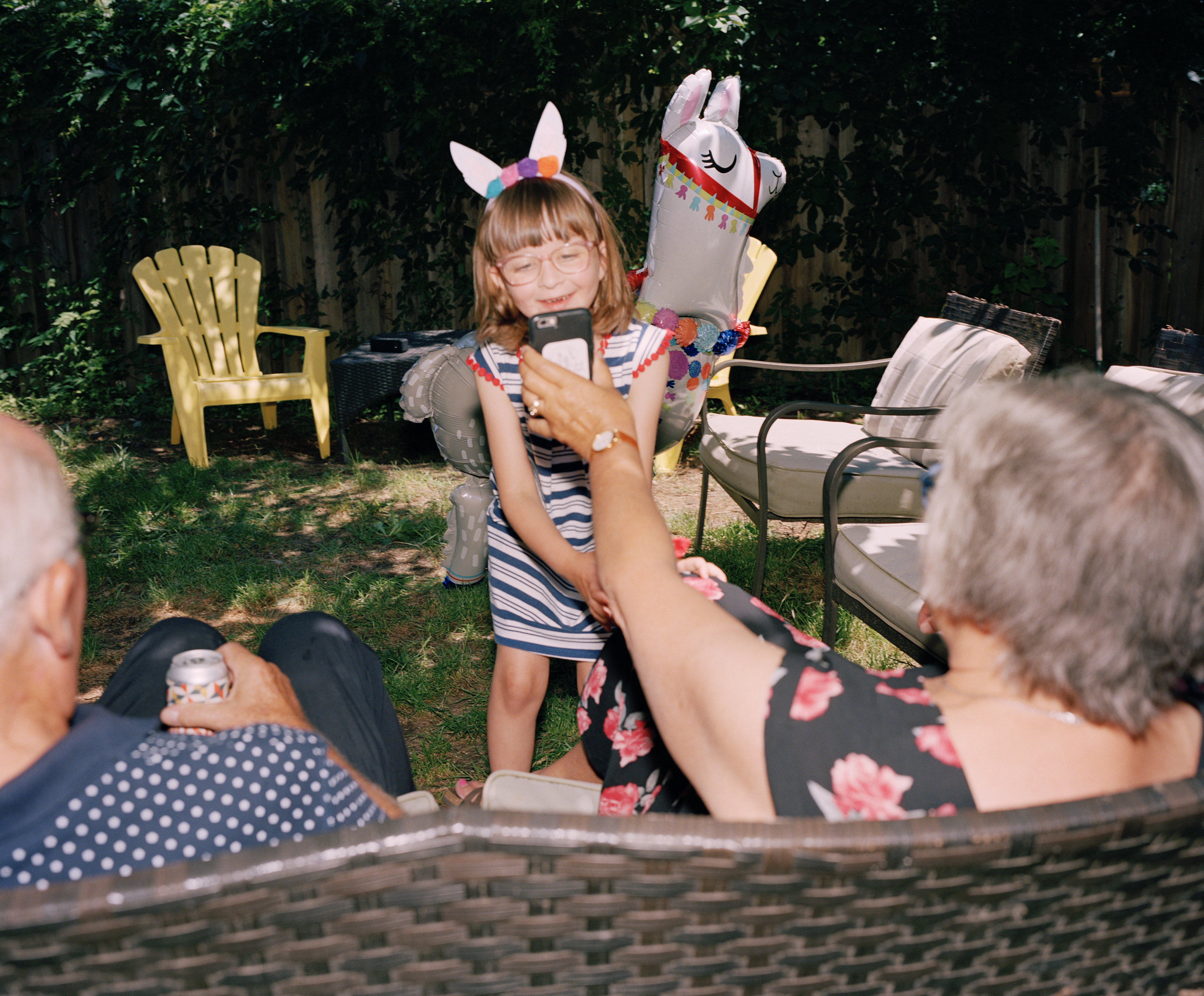 “Nora’s favourite animal of the moment is llamas., so the whole party was llama-themed. We had llama dishes, napkins, tablecloths and a five-foot-high walking llama helium balloon. As people started arriving, it felt a bit strange at first, since I haven’t hosted a group of people in a long time. We didn’t even know how to greet each other. Do we fist bump? Can we shake hands? Do we wear our masks? Some guests kept their masks on the whole time, and others only masked up when they were standing close to others. At one point, I had gone back inside to get a drink for Stephanie’s aunt, and I stopped and thought, Wow, it feels good to have people here. This feels like normal again. My parents had a great time too. There were some people at the party that they might not have seen in years, maybe even since our wedding. 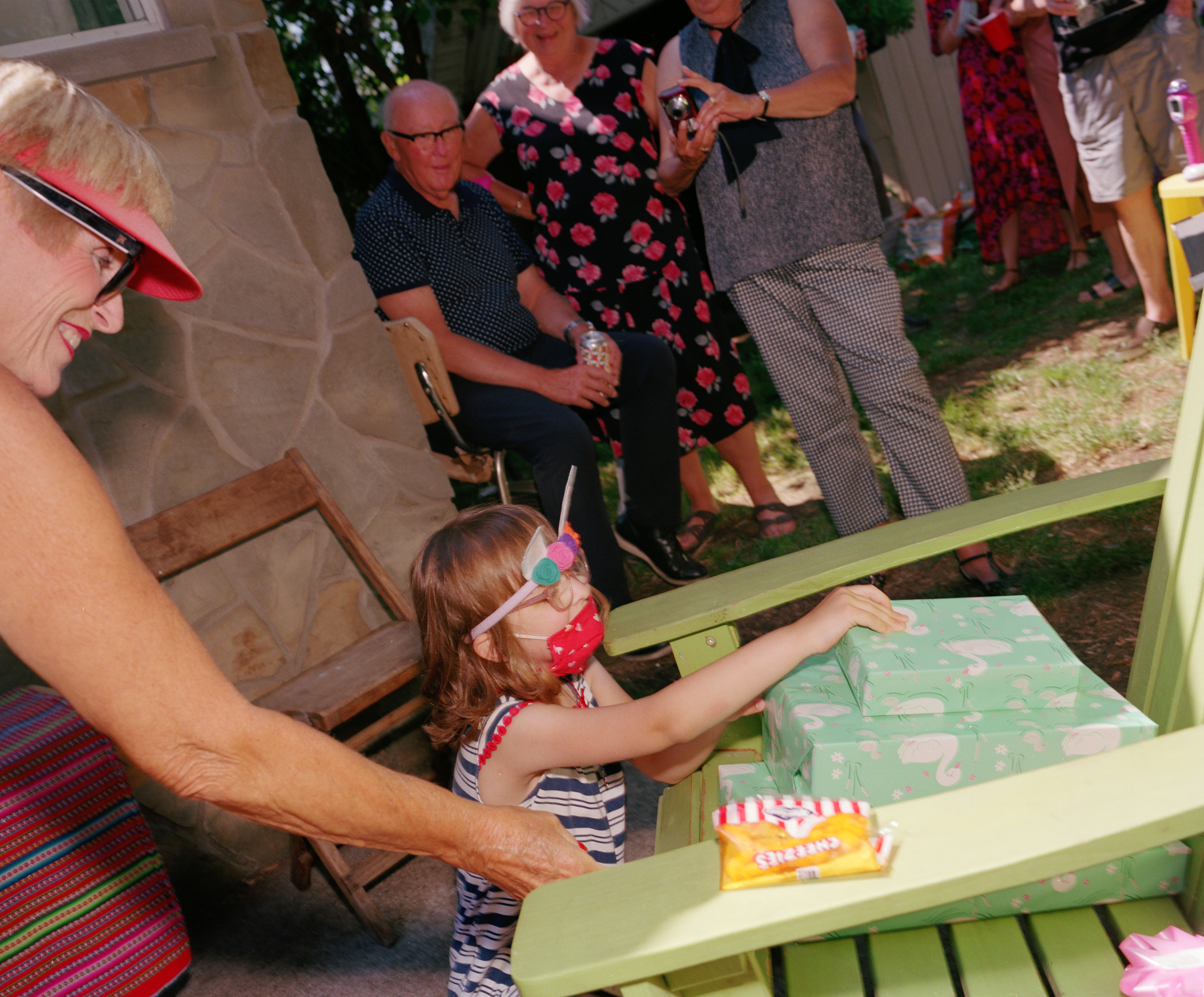 “Several times throughout the day, Nora turned to me and said ‘Today is just wonderful,’ or ‘Today has just been the loveliest day.’ She’s quite articulate. You could tell she was exhausted by the end of it. It was an emotional day for a little kid—to have all the people she loves, who she hadn’t seen in a year, come to her house for a visit. She had the time of her life.”