He says companies that produce plastic should pay to recycle it 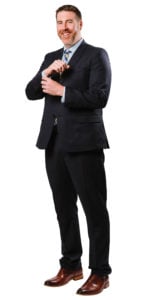 You moved here from Halifax in January to head up Toronto’s Solid Waste Management Services. What do you do, exactly?
I’m responsible for the collection, processing and management of all the waste, blue bin and green bin material, as well as household hazardous waste, for the city of Toronto. Broadly speaking, my day-to-day involves dealing with 1,100 staffers and working with councillors to provide ratepayers with a high level of customer service.

The news has been all about trash lately: China refusing Canada’s recyclables, the Philippines shipping back our garbage, the oceans filling with plastic. So, how much garbage is Toronto producing and where is it going?
Roughly half a million tonnes a year goes to the Green Lane Landfill near London, Ontario, which is owned and managed by the city.

What’s the plan once it’s full?
Because of reductions we’ll see from our long-term waste management strategy, we’re hopeful we won’t need another landfill for quite some time. We’ve got about 20 years of life in it.

How much waste are we diverting from landfill?
Fifty-two per cent.

Not bad, though we could be better. Are we moving in the right direction?
We’re stable. Condos and apartments have the most room to improve. They’re at a 25 per cent diversion rate.

How good are Torontonians at sorting? Any infuriating infractions?
A number of contaminants still make their way into blue boxes. Right now, about 30 per cent of the material that goes to our processing facility shouldn’t be there, like garden hoses.

Is the recycling industry really in crisis?
China, a huge market that took approximately half the world’s plastic and paper, is closing that door, and residents are still depositing the same volume of recycling in their blue bins across the country. You have the same amount of supply but half the demand. Some municipalities are moving materials like plastic bags out of the blue box system because they don’t have an end market.

Are we doing that?
No. Ninety-nine per cent of our plastics are reprocessed and managed in Ontario. One per cent goes to Quebec or the United States.

The Liberals announced they’ll ban plastic straws, cotton swabs and other single-use plastics by 2021 if they’re re-elected. Think that’s possible?
The devil will be in the details. With single-use plastic bags, for example, if they define a particular thickness for single-use, businesses might make their bags thicker and create more plastic waste than before.

Trudeau also talked about forcing companies that produce plastic to take on the responsibility of recycling it. Should industry pay for the plastic pollution it creates?
Yes. If companies have to pay to recycle items, they’ll reduce the amount of plastic, cardboard and Styrofoam they use.

How did you get into this business?
I’m an accountant and was in the finance department with the City of Halifax. I had a few different finance roles and the last one was in waste. The manager left and I was promoted.

So it wasn’t your dream as a kid to work on a garbage truck?
I wanted to be a farmer or a cherry picker. A lot of people don’t realize the value of garbage collectors, but the work they do to make the city clean is important and it’s hard work. In the world of garbage we also have lawyers, engin­eers, accountants, communications people, HR people, graphic designers and a couple of PhDs who do policy research.

We’re pretty diligent at my house: we don’t buy bottled water and we use canvas grocery bags. Then my six-year-old will come back from birthday parties with loot bags full of plastic garbage. I just throw up my hands and think, Why bother?
Every small change can make a big difference. If we all gave up, we’d be in a world of hurt.

Do you do anything special at your home? Take your Mason jars to the grocery store, say?
Not really. We aren’t perfect, but we do strive every day to do a little better. Which is what we try to get through to all residents—just do that little extra bit every day.