Canada’s tech darling Shopify—the online platform used to sell everything online, from wallpaper to roasted almonds—has just moved into their new King Portland Centre digs. The quickly growing company (they currently have 700 employees in Toronto and have committed to doubling that number by 2022) has taken over the top nine floors of this 15-storey, Hariri Pontarini–designed tower. Shopify will be keeping their Spadina and Wellington office and plan to add a third location at the Well once that development is complete. This new office at 620 King Street West will house around 450 “Shopifolk,” which is what the company calls its employees.

The reception area is located on the 10th floor, and guests need to sign an NDA before entering: 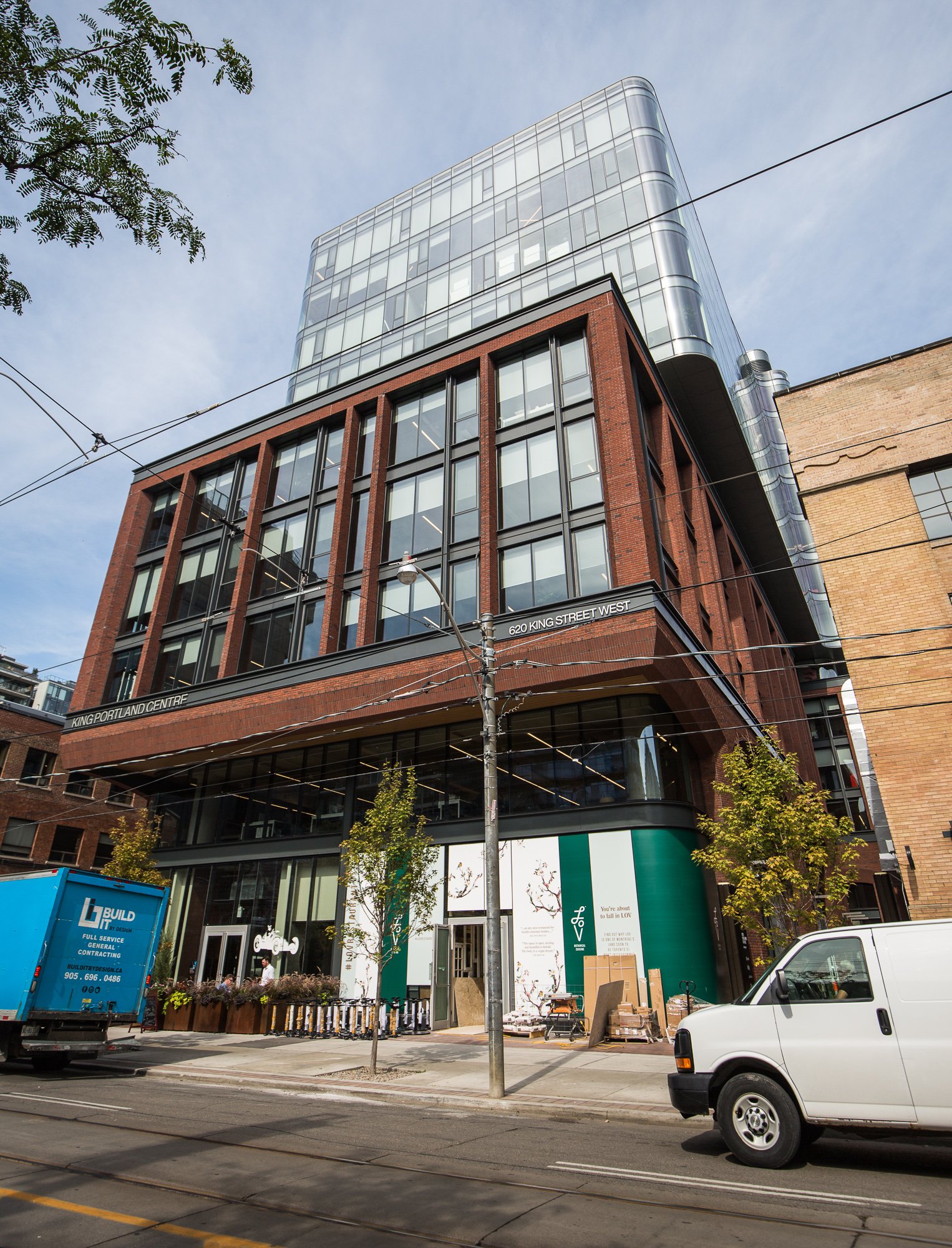 Here’s the cafeteria, which doubles as an auditorium. Many of the products—like the Gus armchairs and the Cornerstone throw pillows—were sourced from vendors that use the Shopify platform to sell their goods: 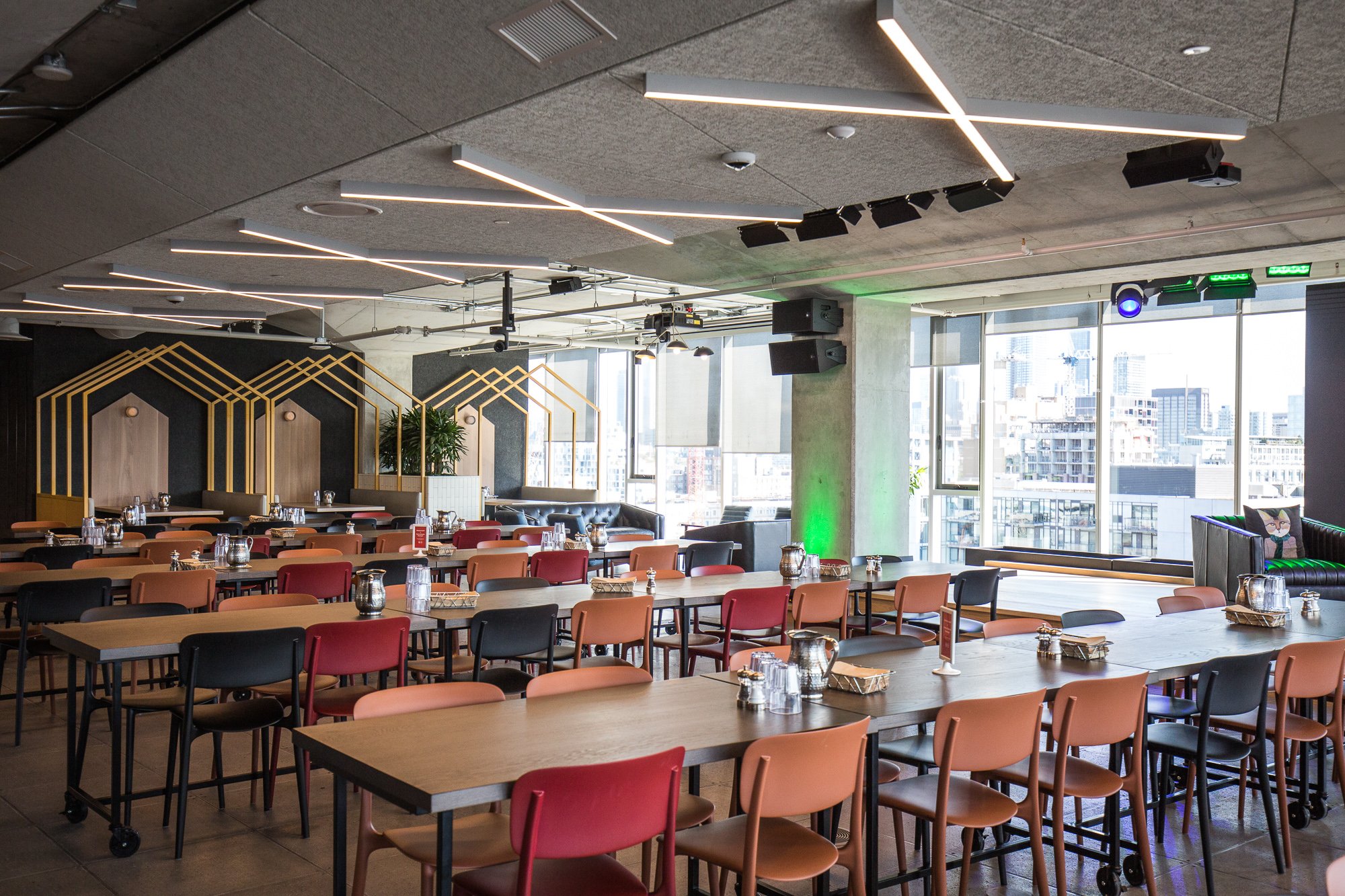 Behind this bleacher seating, there’s a staircase that connects to the 11th floor. That floor isn’t finished yet, but when it’s done it will house a games room, a yoga studio and a wellness room: 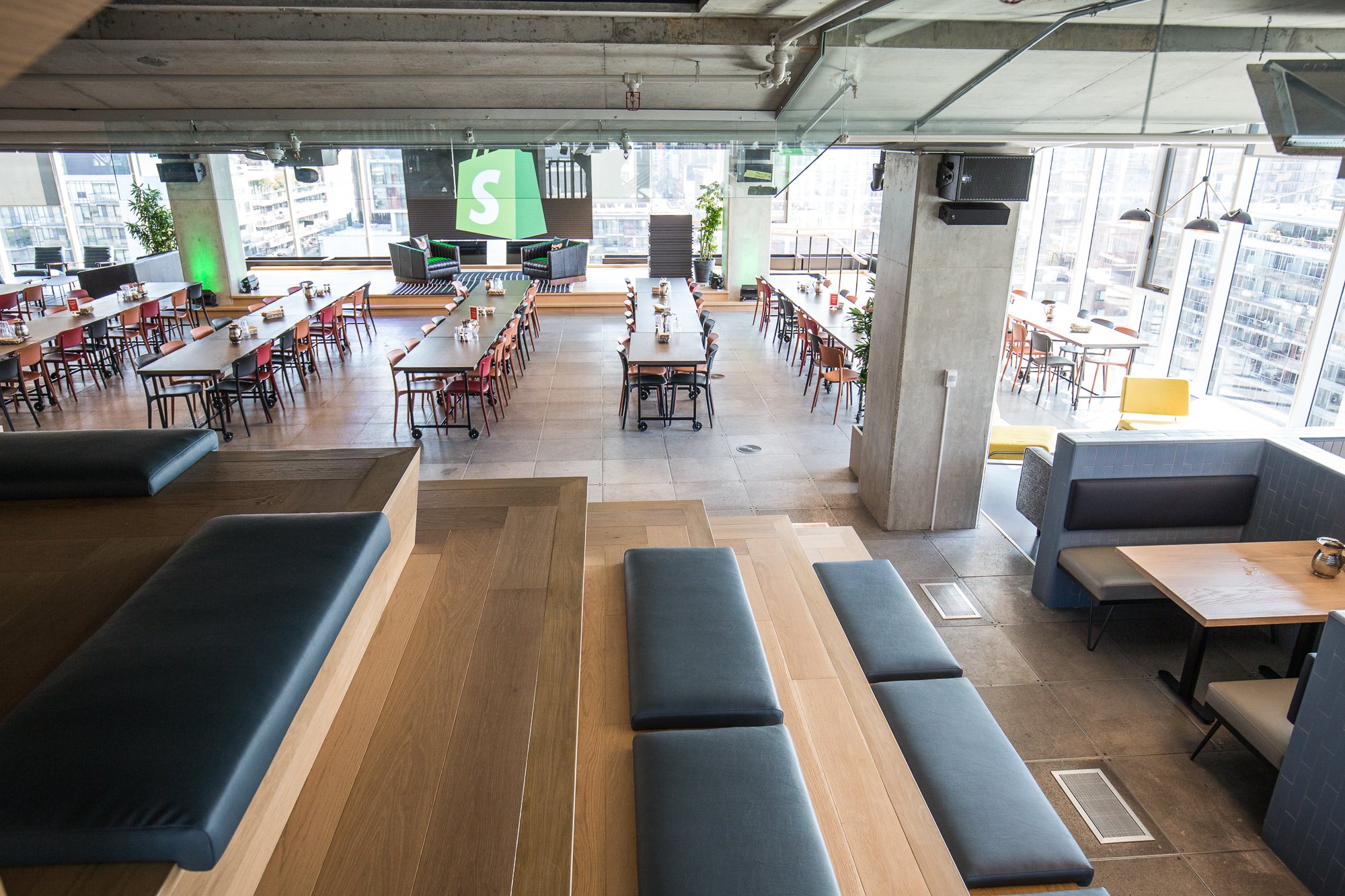 The cafeteria serves both breakfast and lunch: 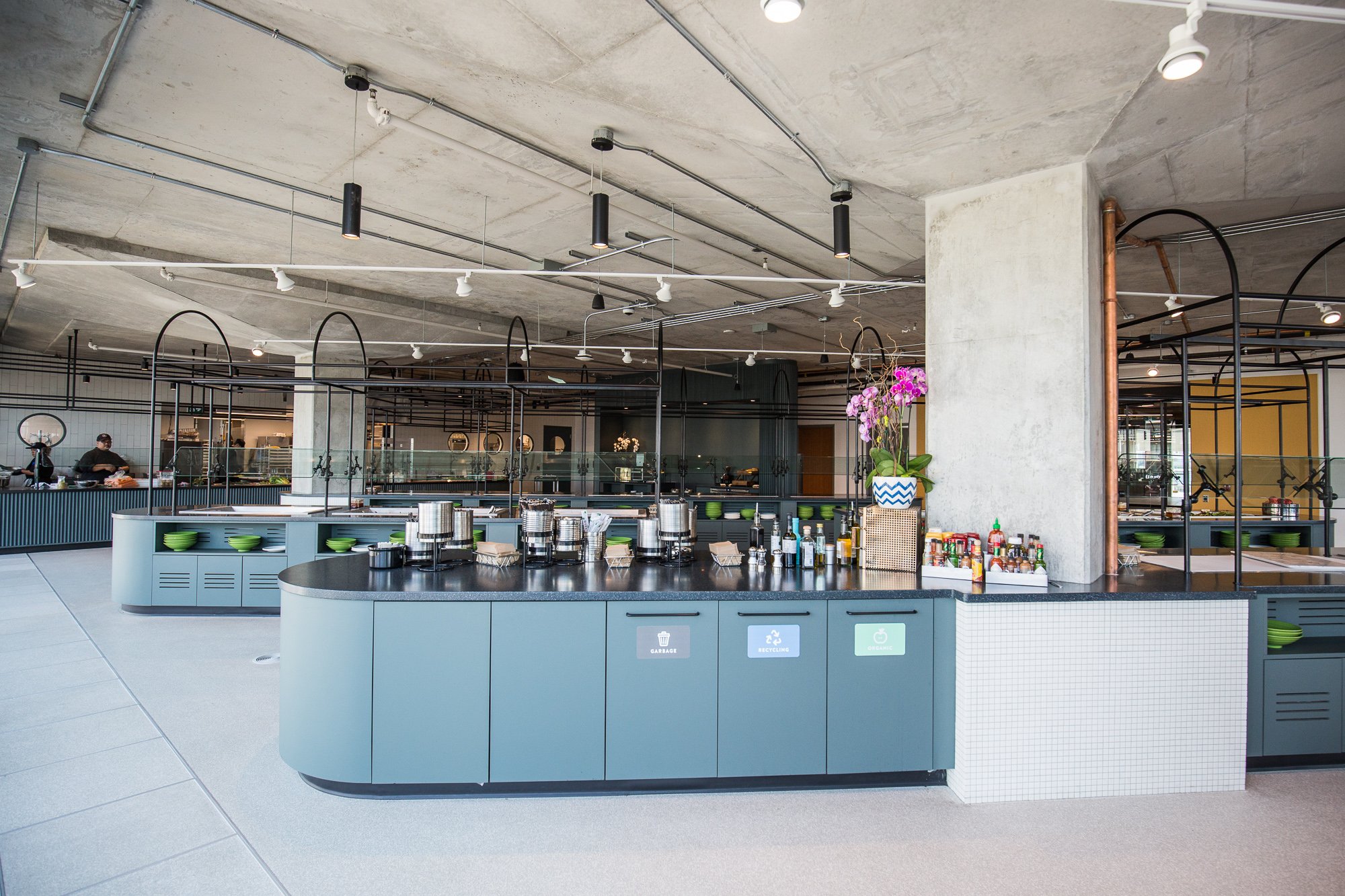 It has many different styles of seating. There are harvest tables for big groups, two-tops for people who want something a bit more intimate, as well as booths: 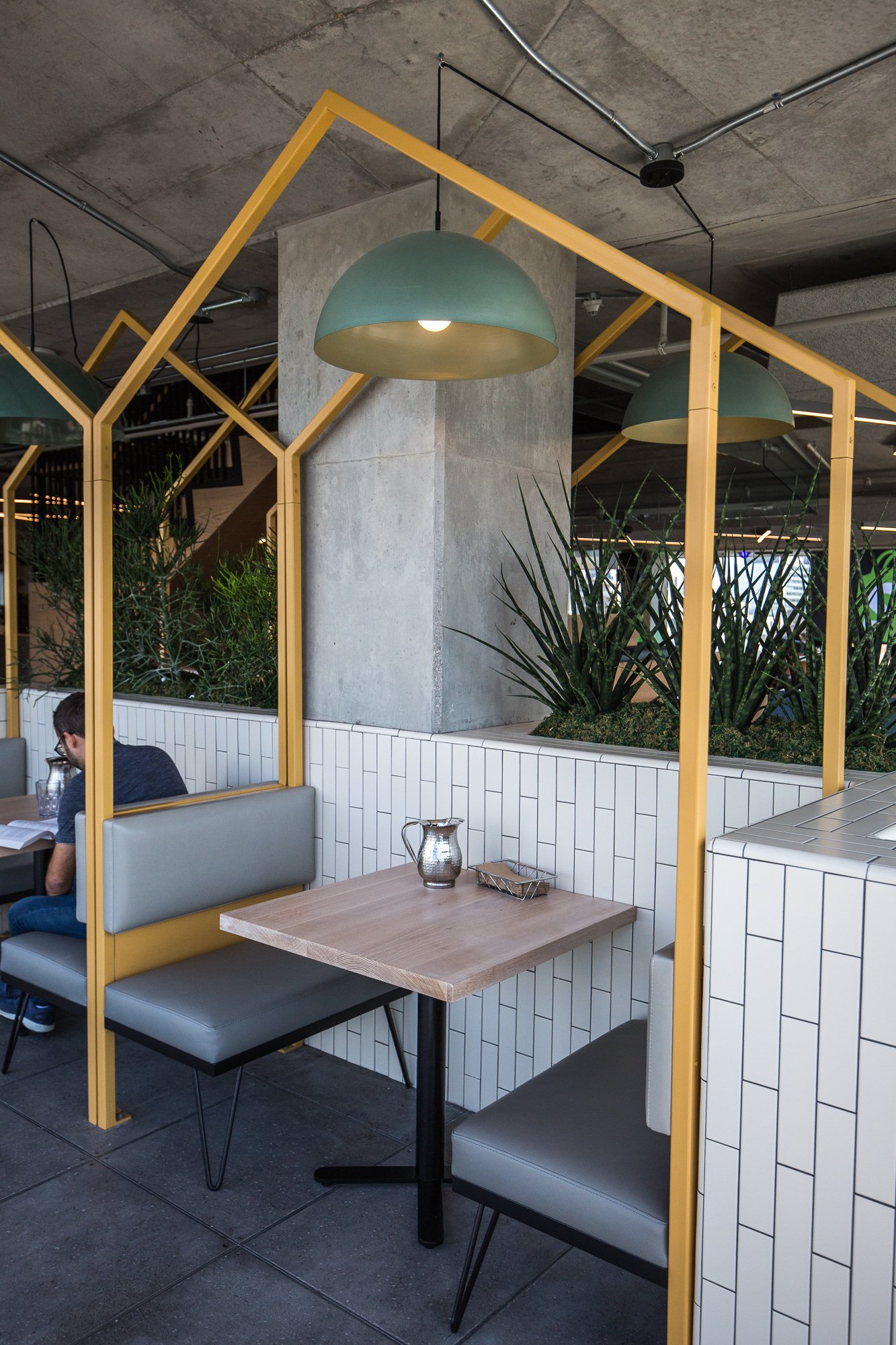 In an effort to cut down on waste, Shopify projects the data about how much cafeteria food gets tossed. Not only does this help make Shopifolk more aware of their own consuming habits, but it also allows the kitchen to react accordingly, so they can curtail waste: 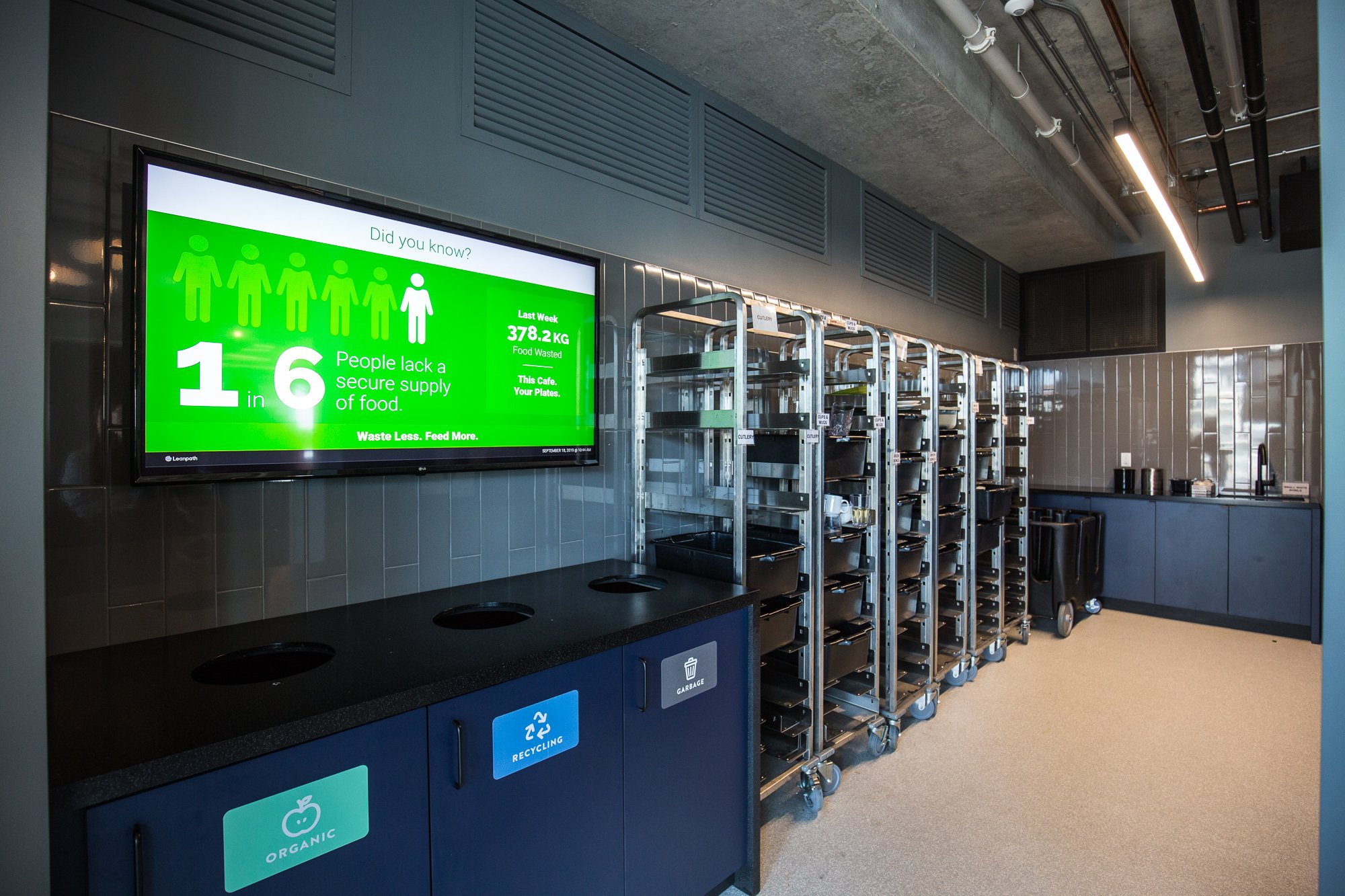 Here’s a peek at their selection of local craft beer. (The nun’s habit–like light fixtures were created by Milke Bau, who also made lights for DaiLo, the Anndore House, Baro and Bisha.) 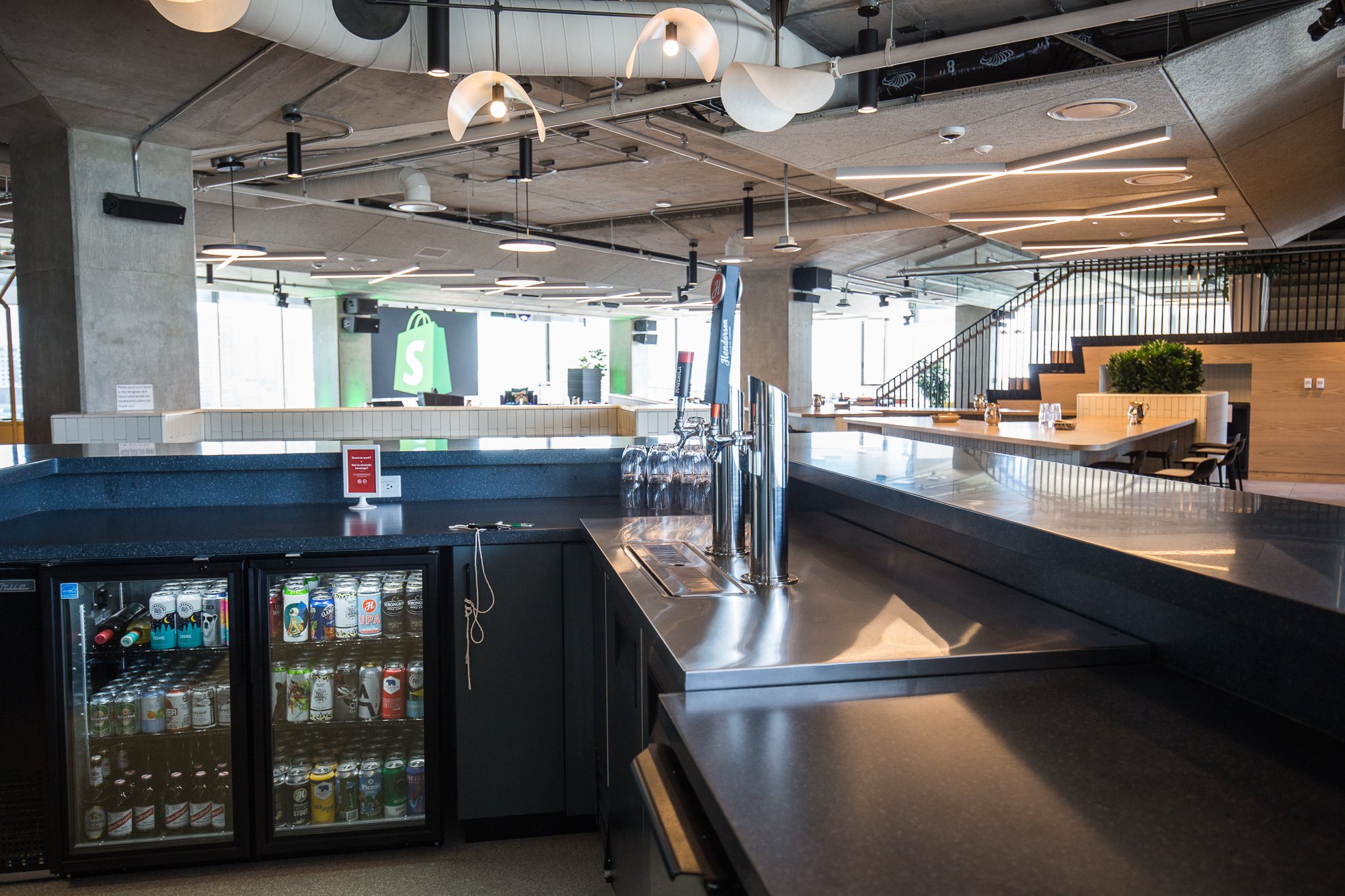 Linebox Studios wanted to offer something for every type of workplace personality, from extroverts who like sitting with 12 of their closest pals to those who prefer a quieter spot by the window. There are even ultra-private little nooks like this one: 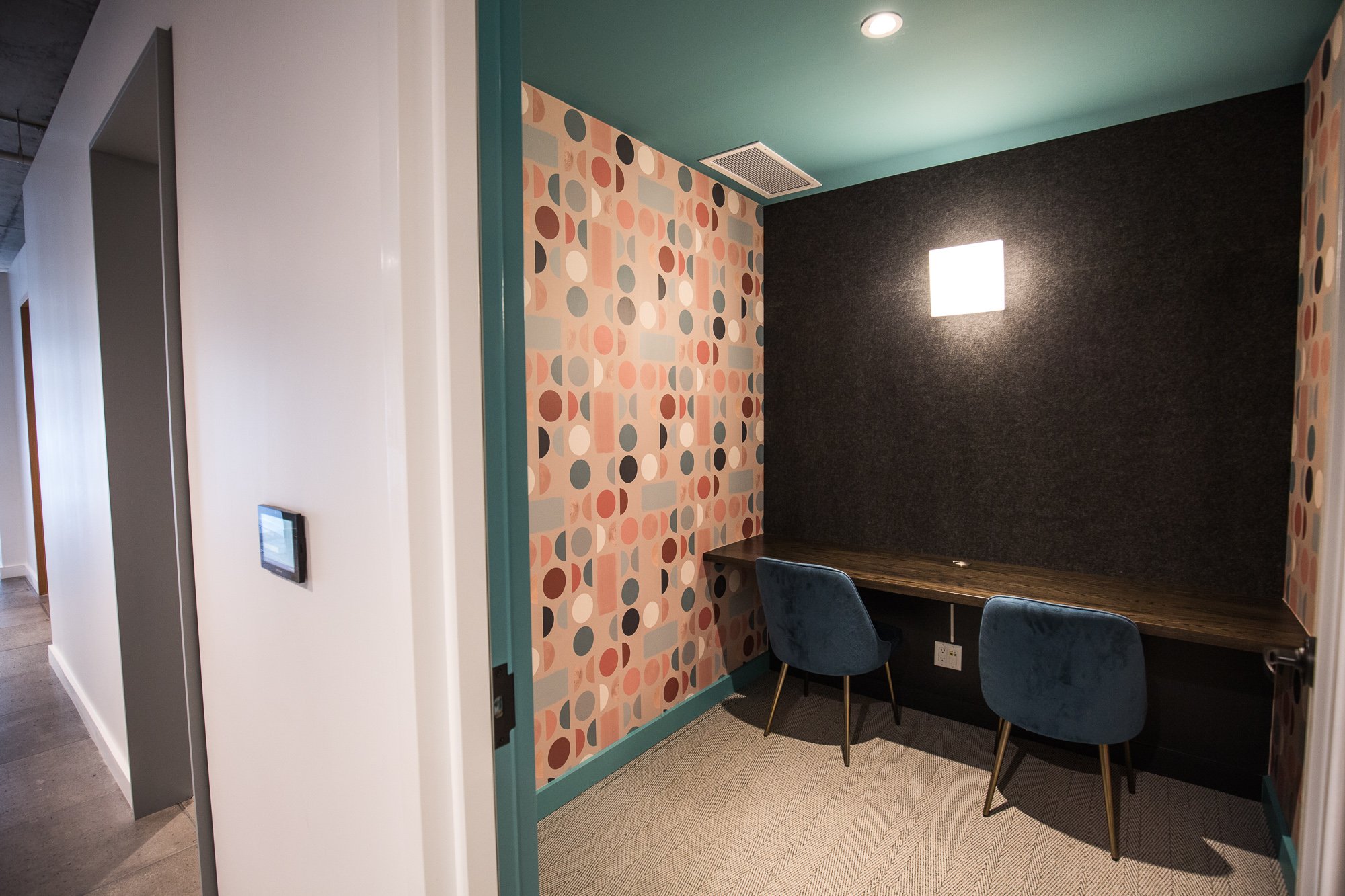 Each floor has a different theme, and the names of the meeting rooms are crowdsourced from Shopify employees. The eighth floor has an art theme, so there’s a Picasso boardroom and a Banksy phone booth: 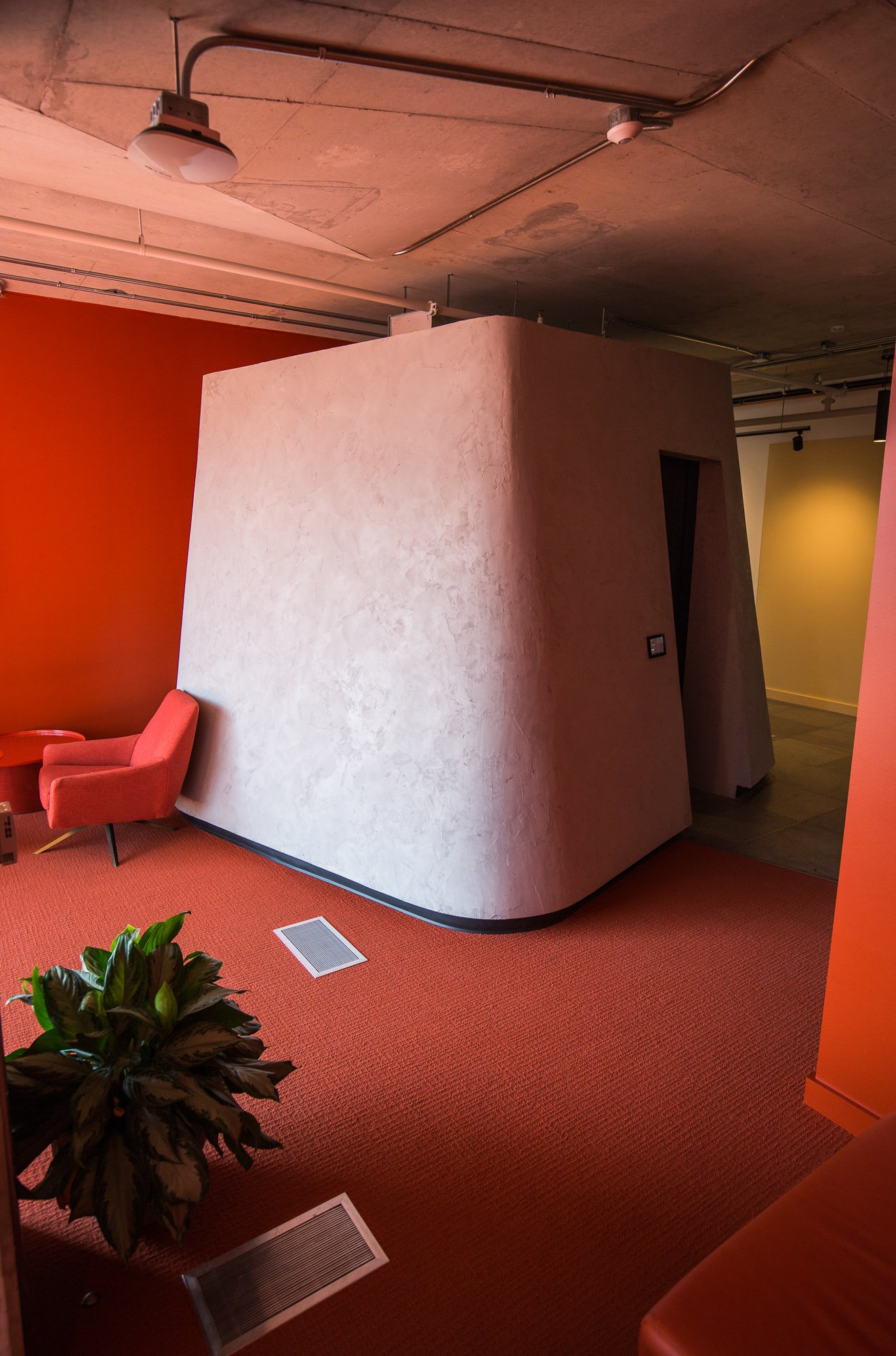 Gathering spaces like this persimmon-coloured room don’t have names and they can’t be booked. They’re intended for more casual gatherings: 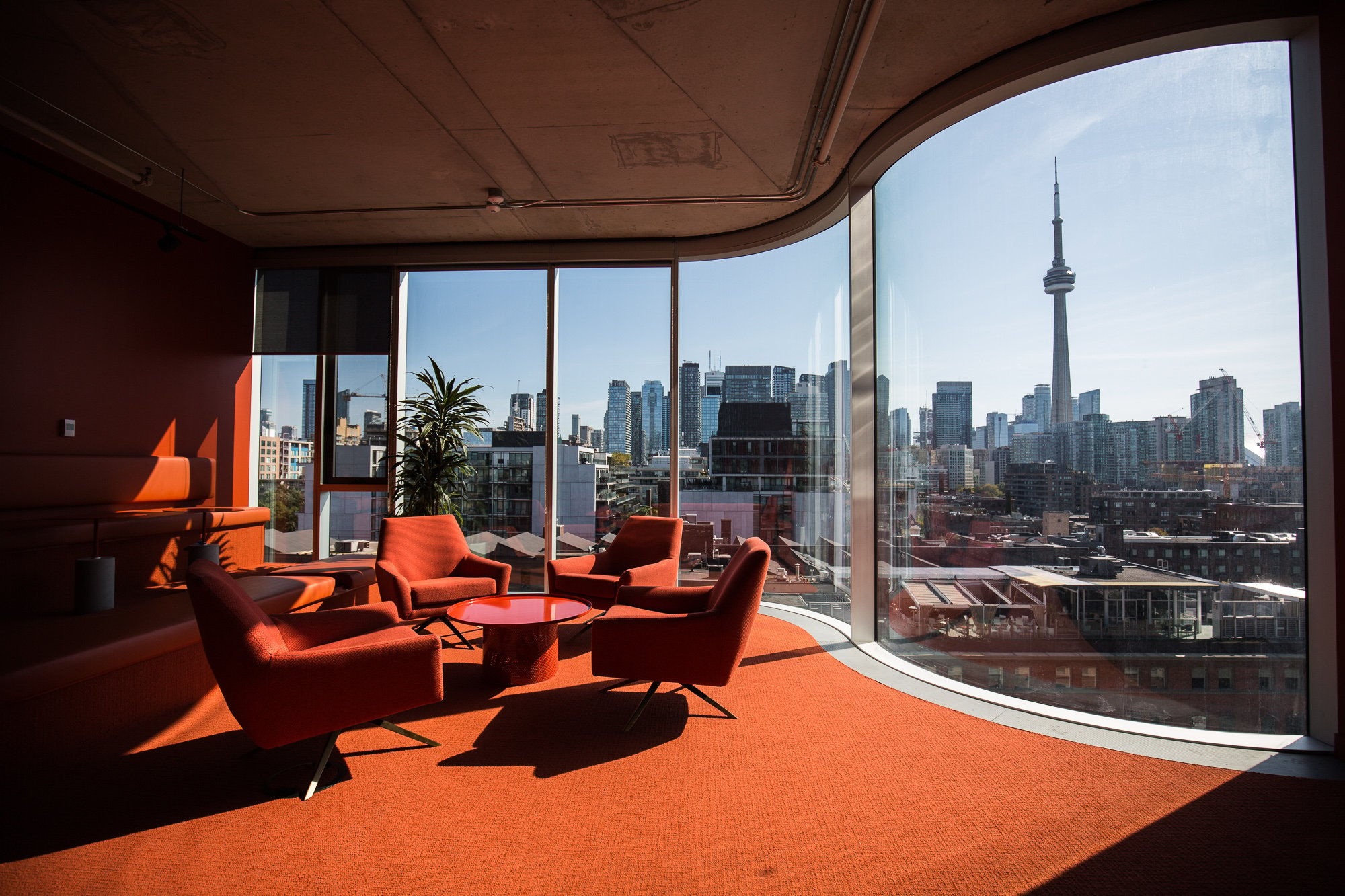 Instead of having one big building, Shopify likes to cluster their offices near each other, kind of like a campus. Because of this, there’s a lot of inter-office migration throughout the day, so there are many open work spaces for visiting Shopifolk. This planter doubles as a power source with multiple outlets to plug in: 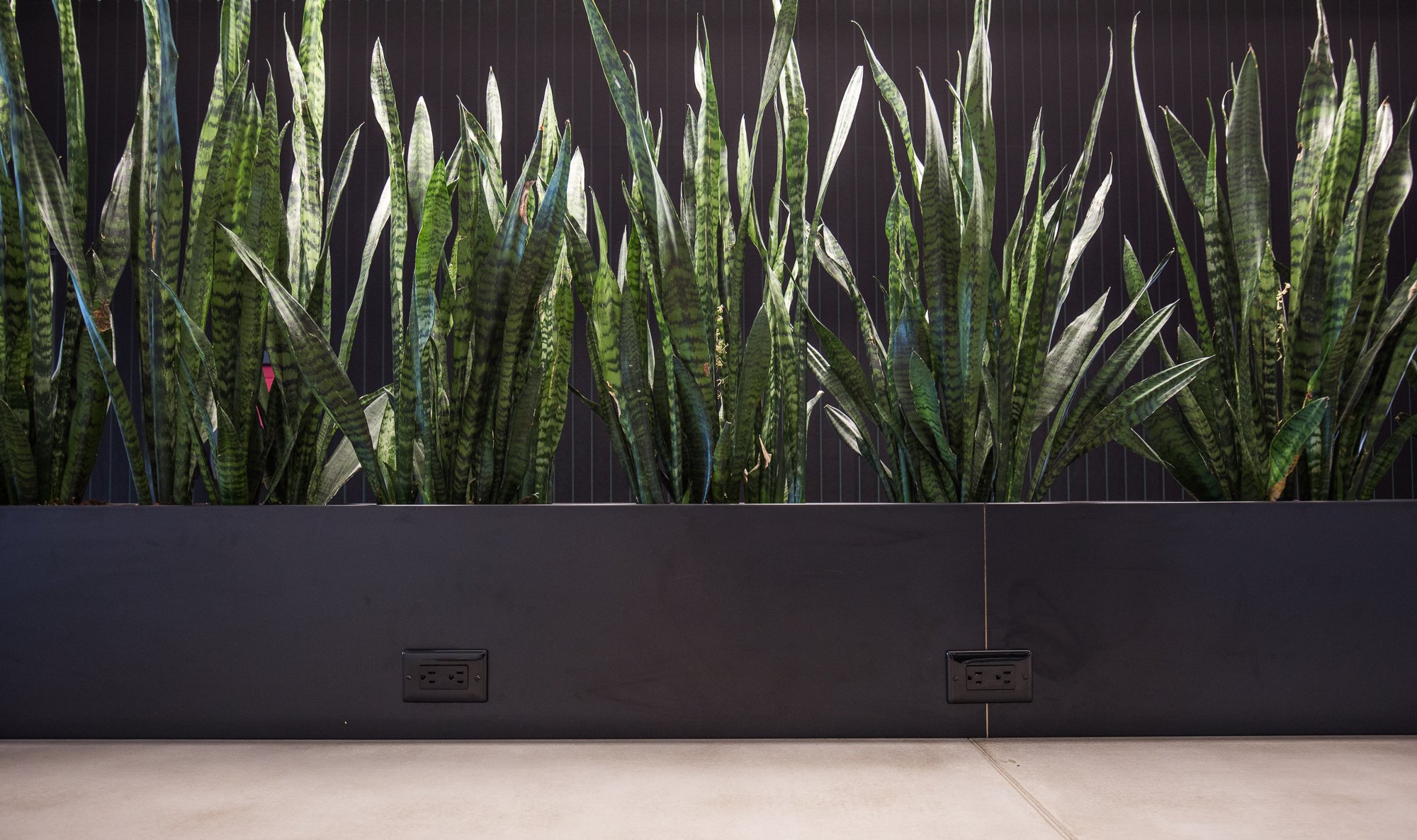 This is the Merchant Gallery, which showcases photos of Shopify’s varied users. The sofa in this room is from Hem, a Shopify merchant. 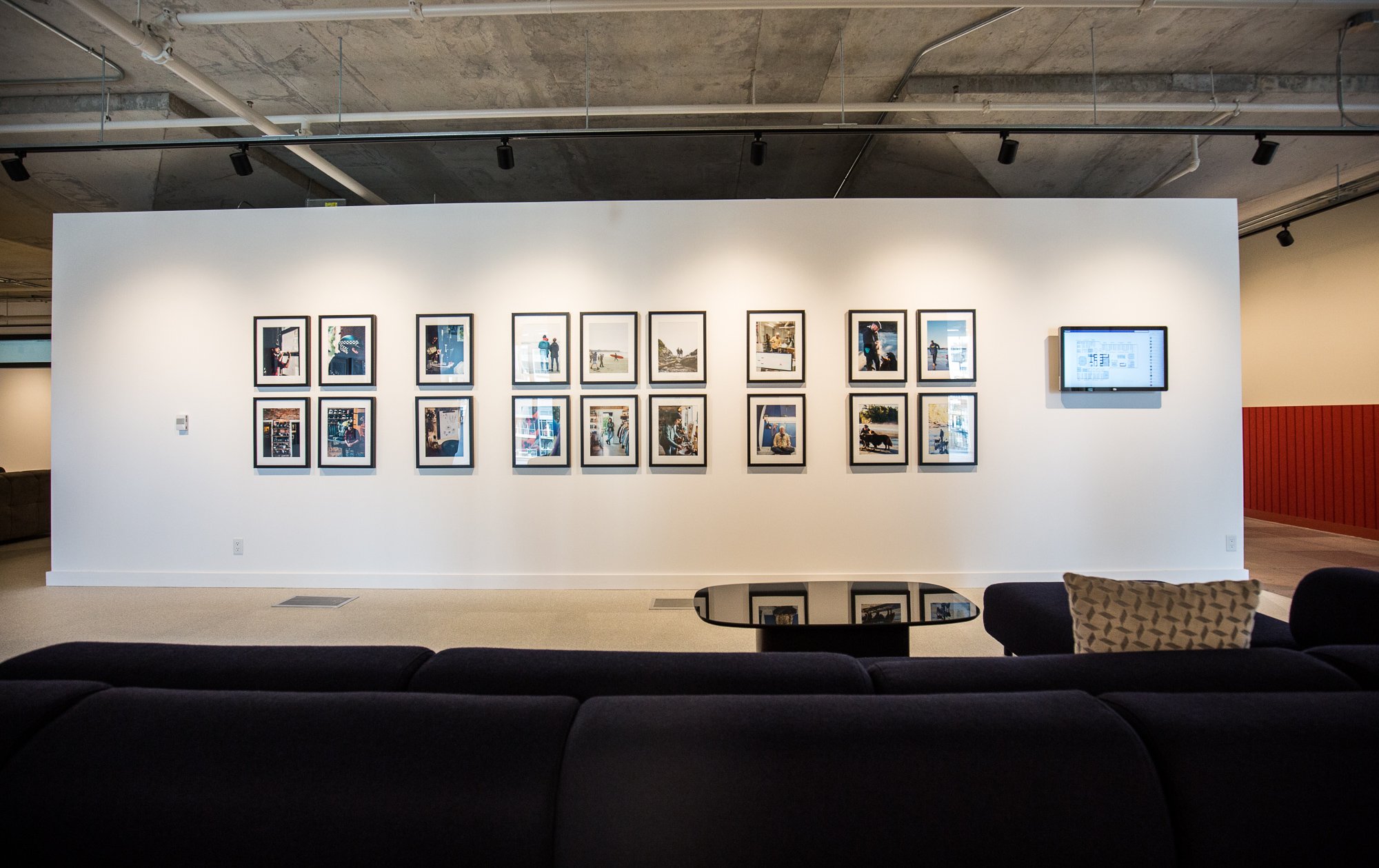 Here’s one of the many hack rooms: spaces that have have two side-by-side computers intended for coders to work in tandem: 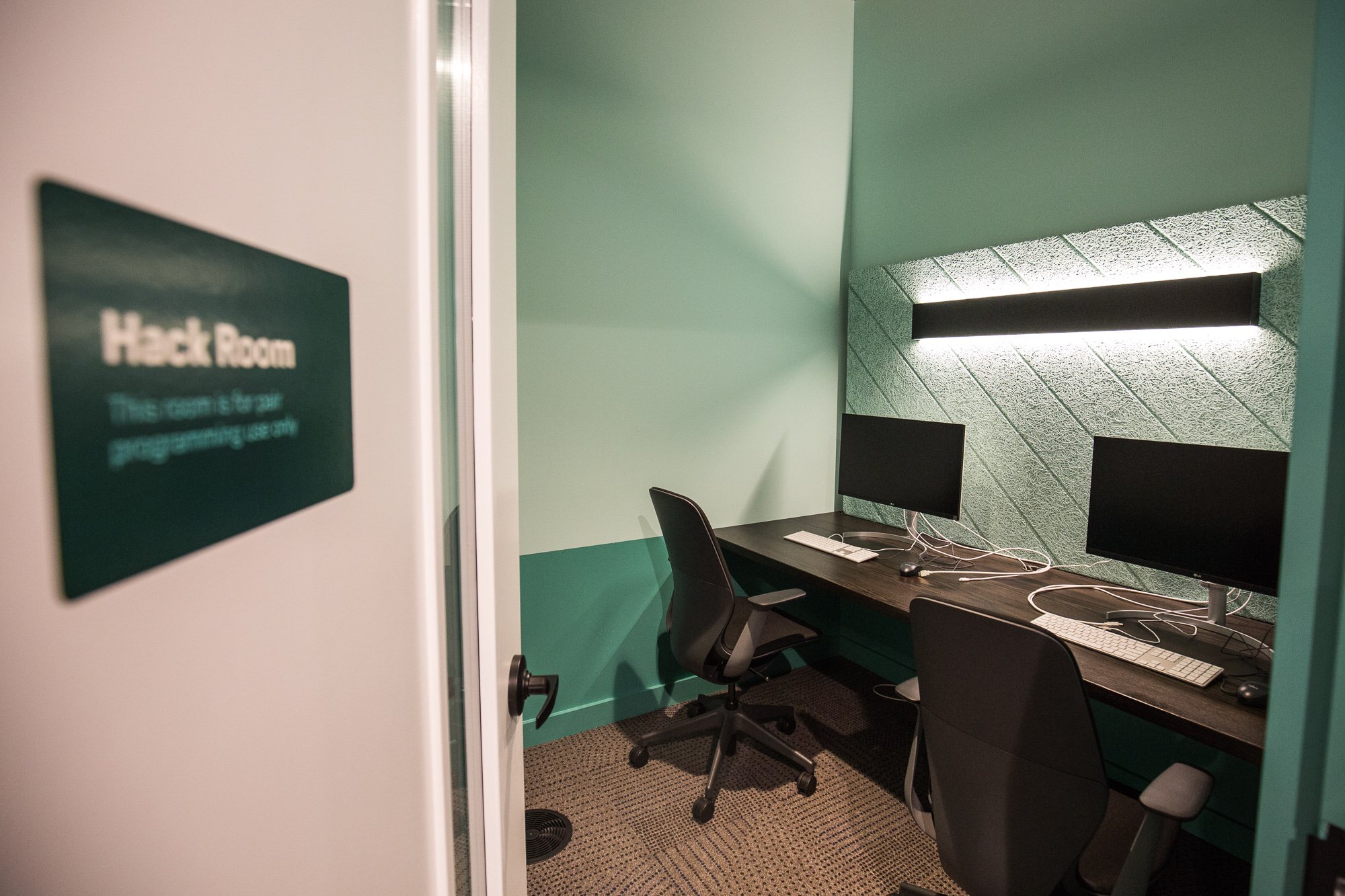 These are all photos of dogs owned by Shopify employees. The company had a photographer come in for a puppy-packed photo shoot. Shopify often offers their employees little perks, like free head shots, massages, financial counselling and yoga classes. And that’s just the icing—each staffer gets $5,000 towards their Lifestyle Benefits account, which they can use for anything from gym memberships to cleaning companies. They can also donate it to a charity, contribute it to their RRSPs or even top up their health benefits: 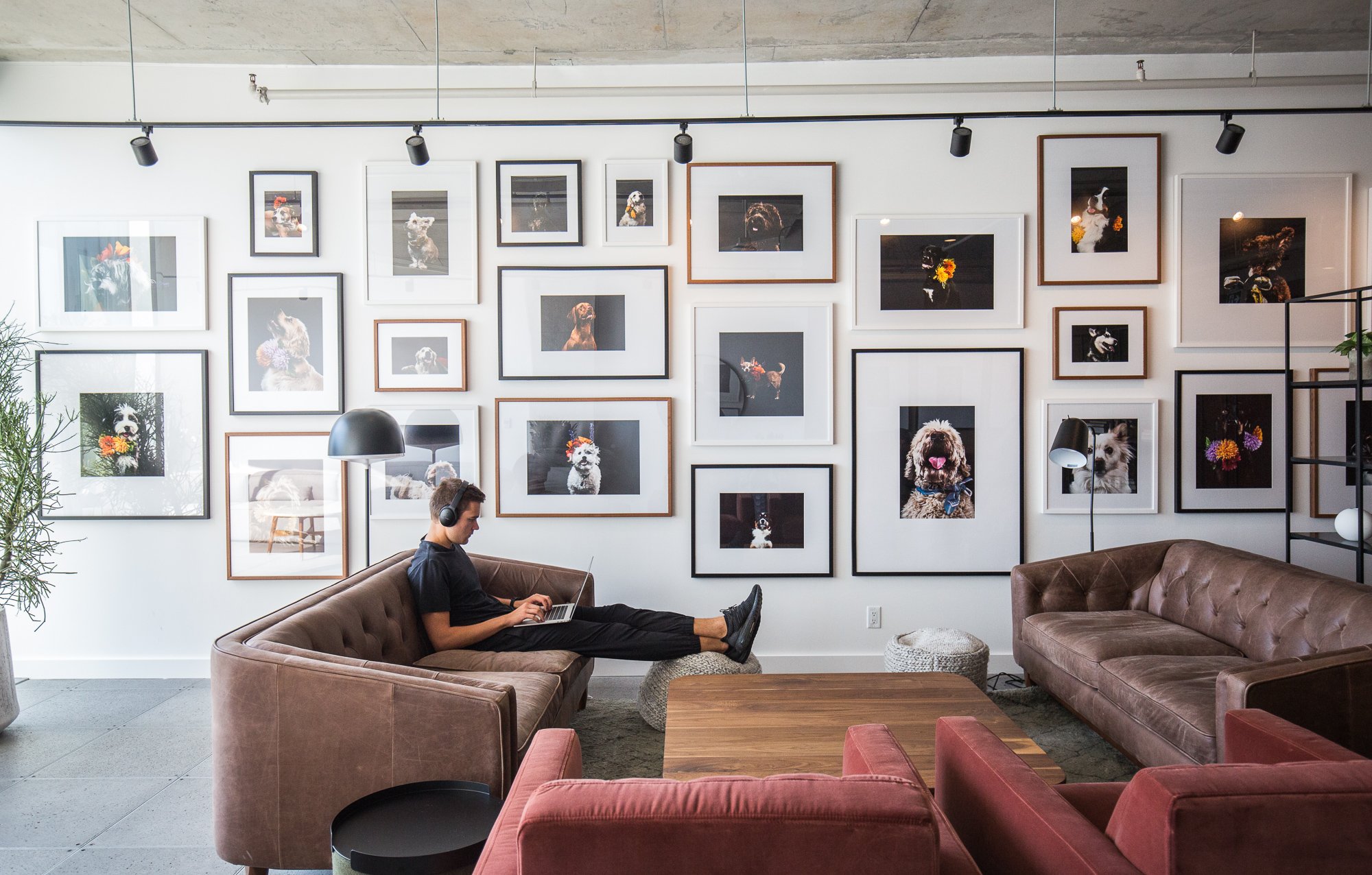 The sixth floor’s meeting rooms are all named “hello” in various languages. This four-person room is called Konnichiwa: 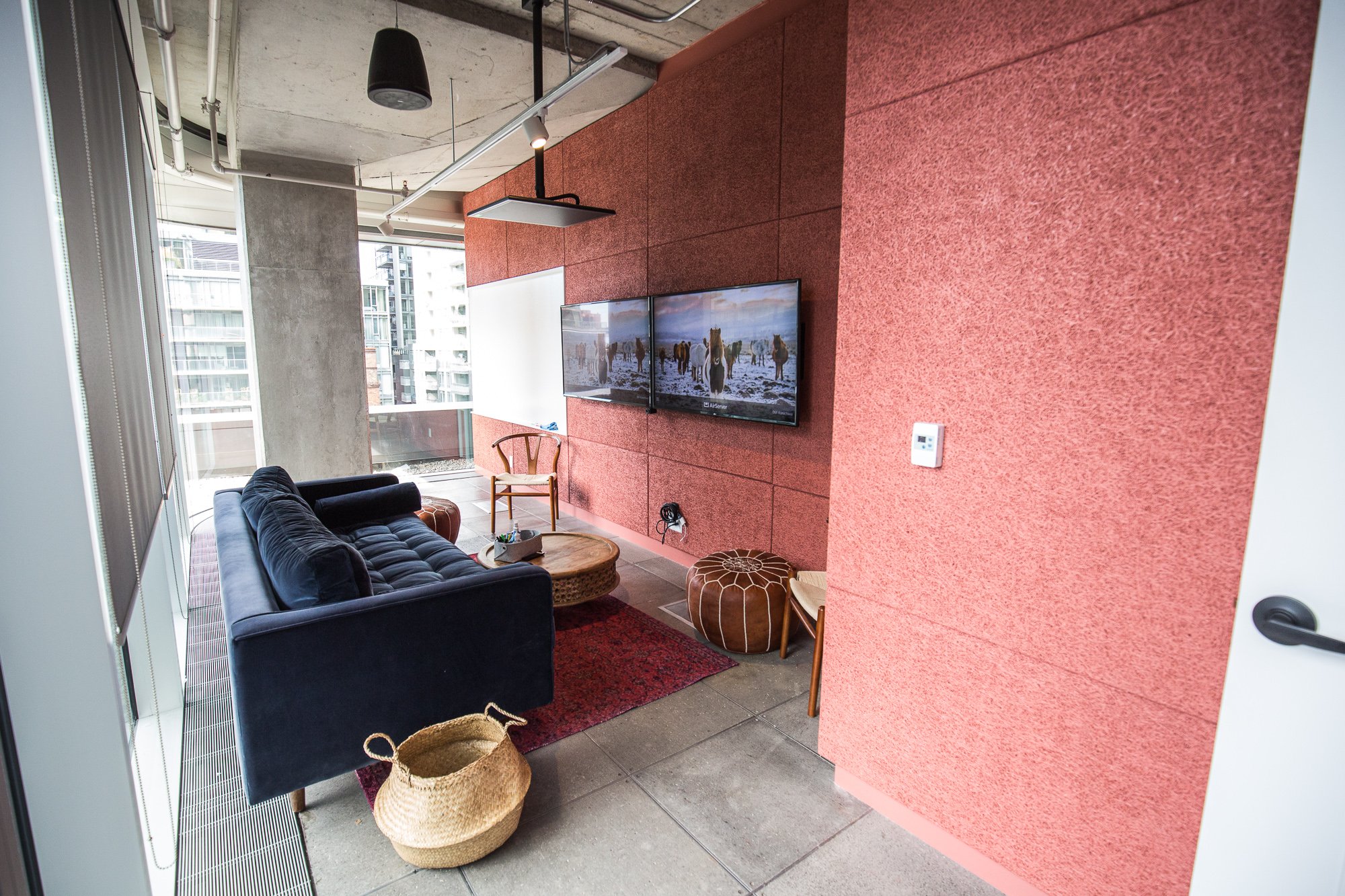 Acoustics were a major concern for Linebox Studios, who used Ezobord, a felt-looking panel that absorbs sound, to ensure echoes are dampened. They like the product because they can laser-cut it to make patterns on walls, and the Canadian company that manufactures Ezobord also uses recycled materials:

Here’s a larger meeting room. The table is by Kroft (a local fabricator and Shopify merchant). The wall that isn’t a giant mural is an old school whiteboard, and the screen is a Jamboard, Google’s interactive high-tech whiteboard that lets you share what you’re sketching electronically: 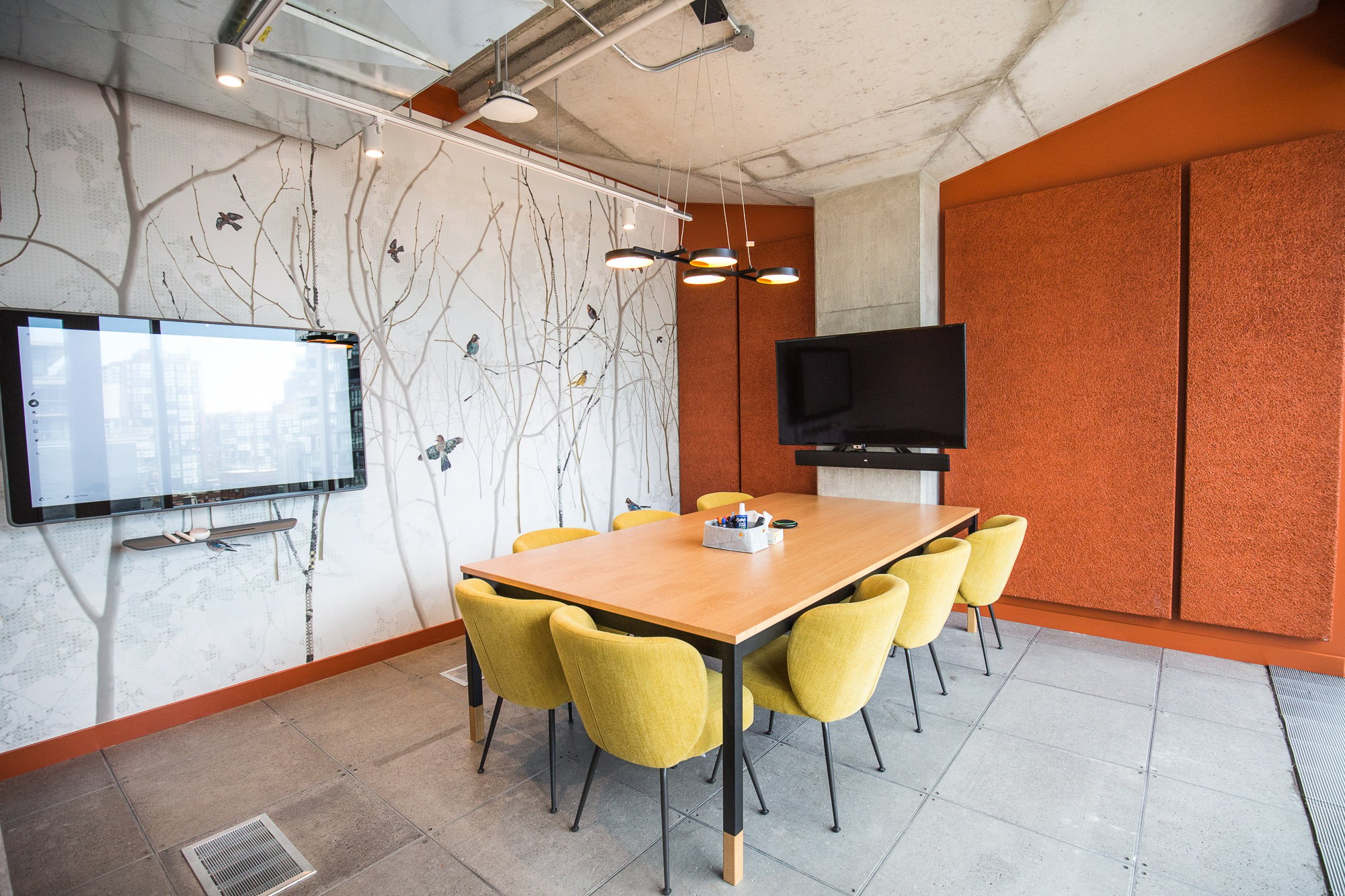 This is called the Room of Requirement. It can be used as a prayer room (there’s a foot bath in the corner) or as a private space to breastfeed. There’s even a little fridge to store breast milk: 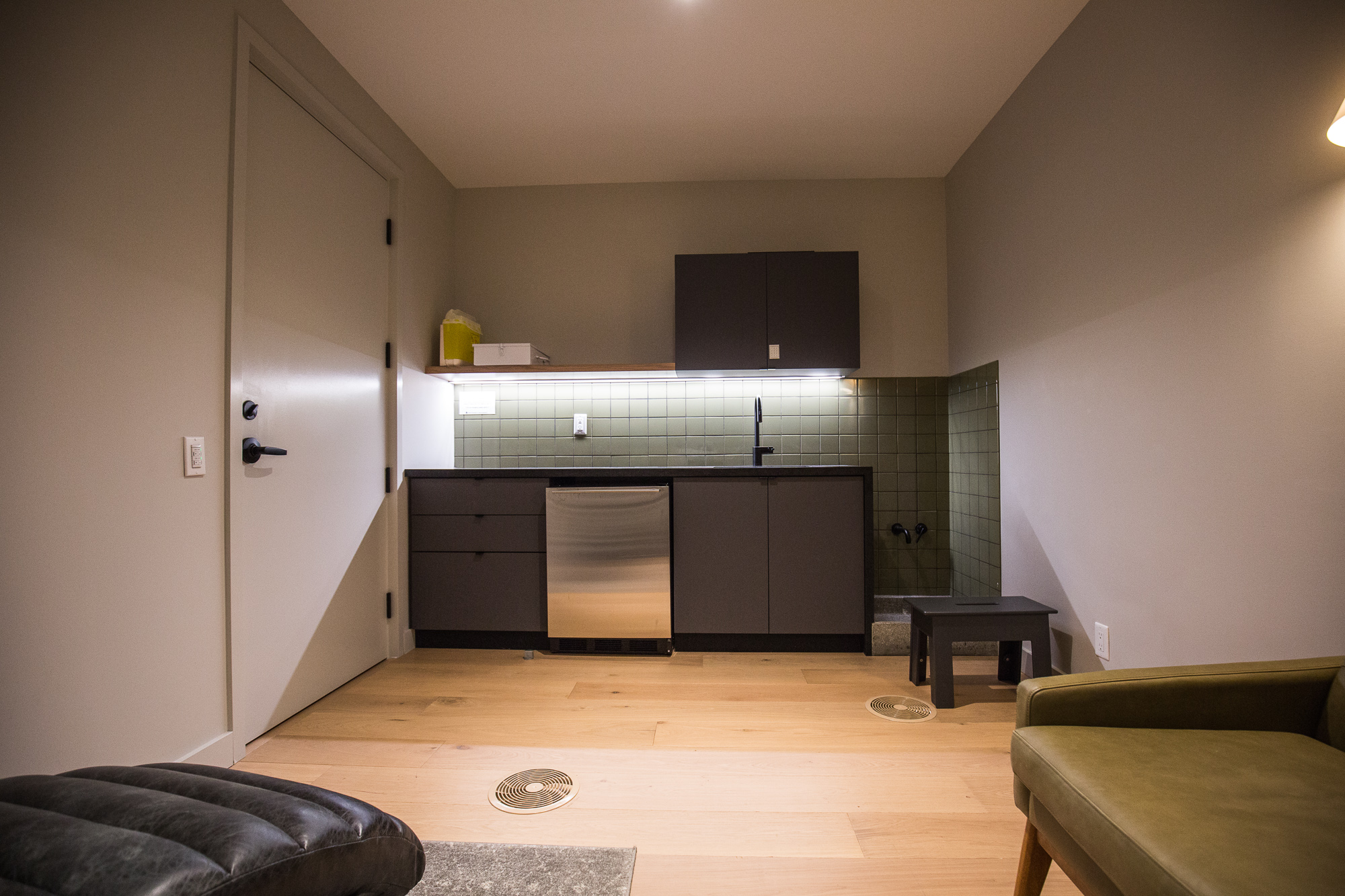 There are also shower facilities: 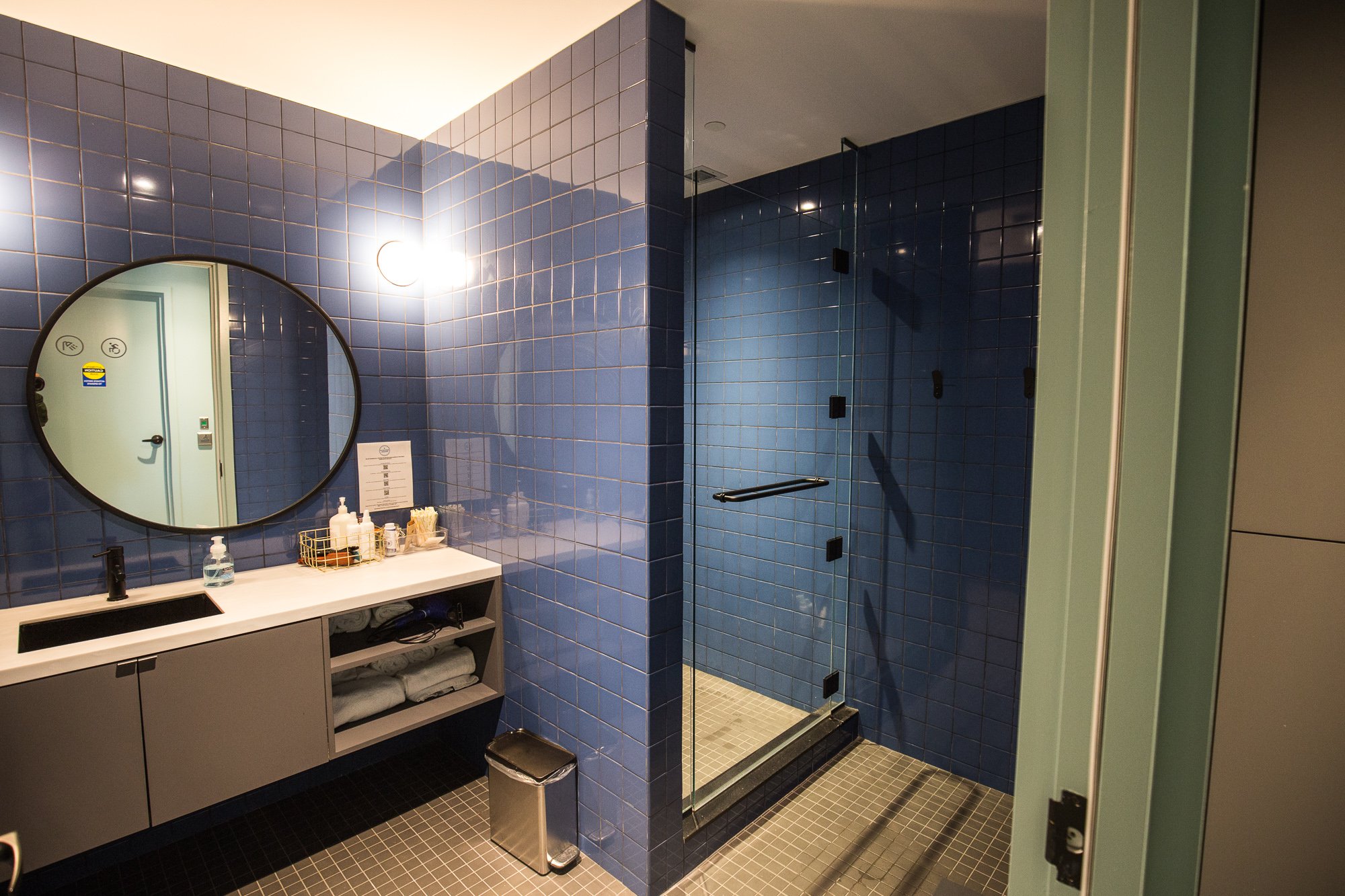 There’s a grab-and-go kitchen with chia puddings, veggie platters, soups, drinks and a sandwich bar on the sixth floor. This space is intended to have a café-like vibe, so music plays softly in the background: 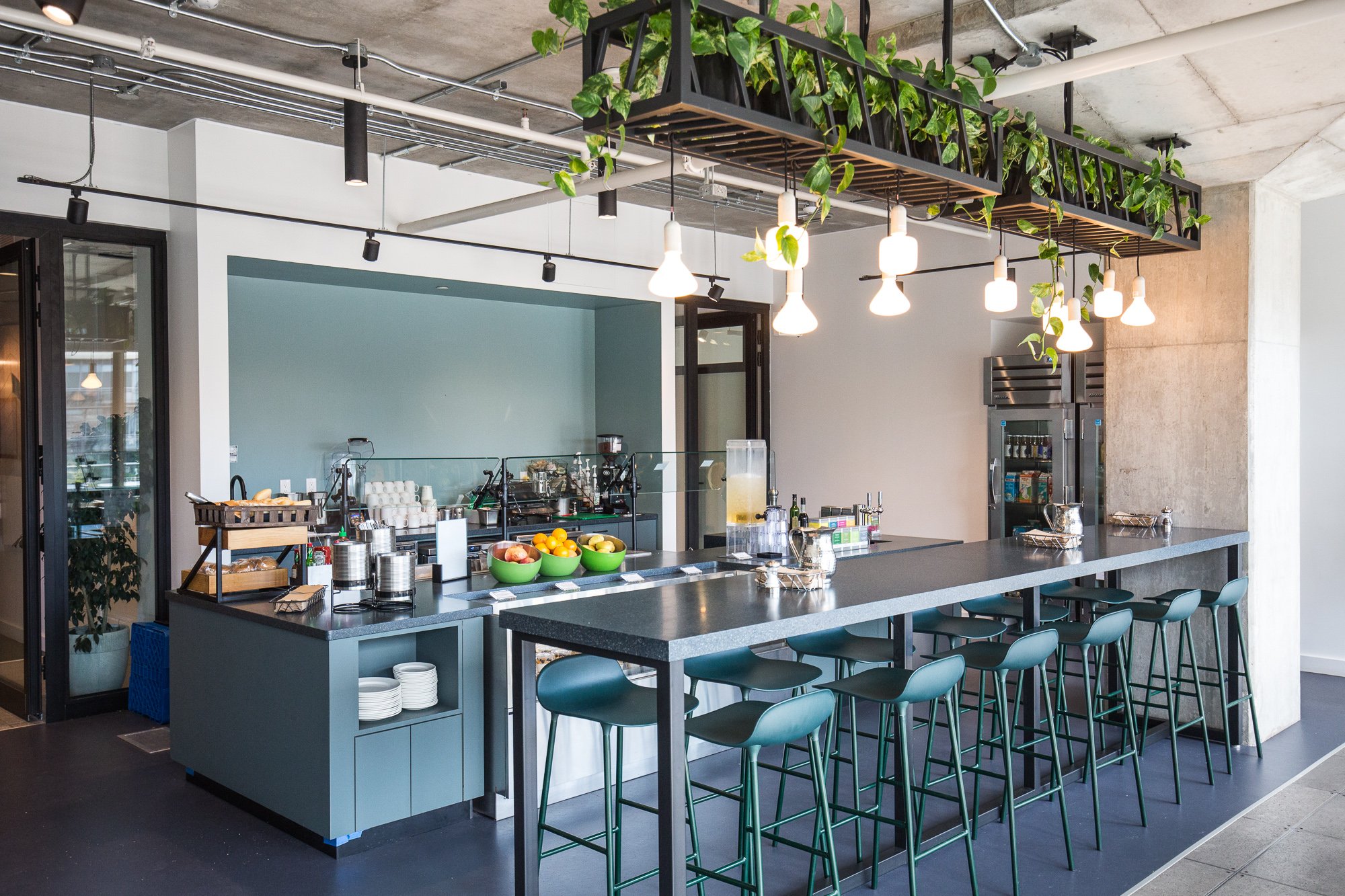 Here’s one of Shopify’s two terraces. This one is accessible via the grab-and-go kitchen: 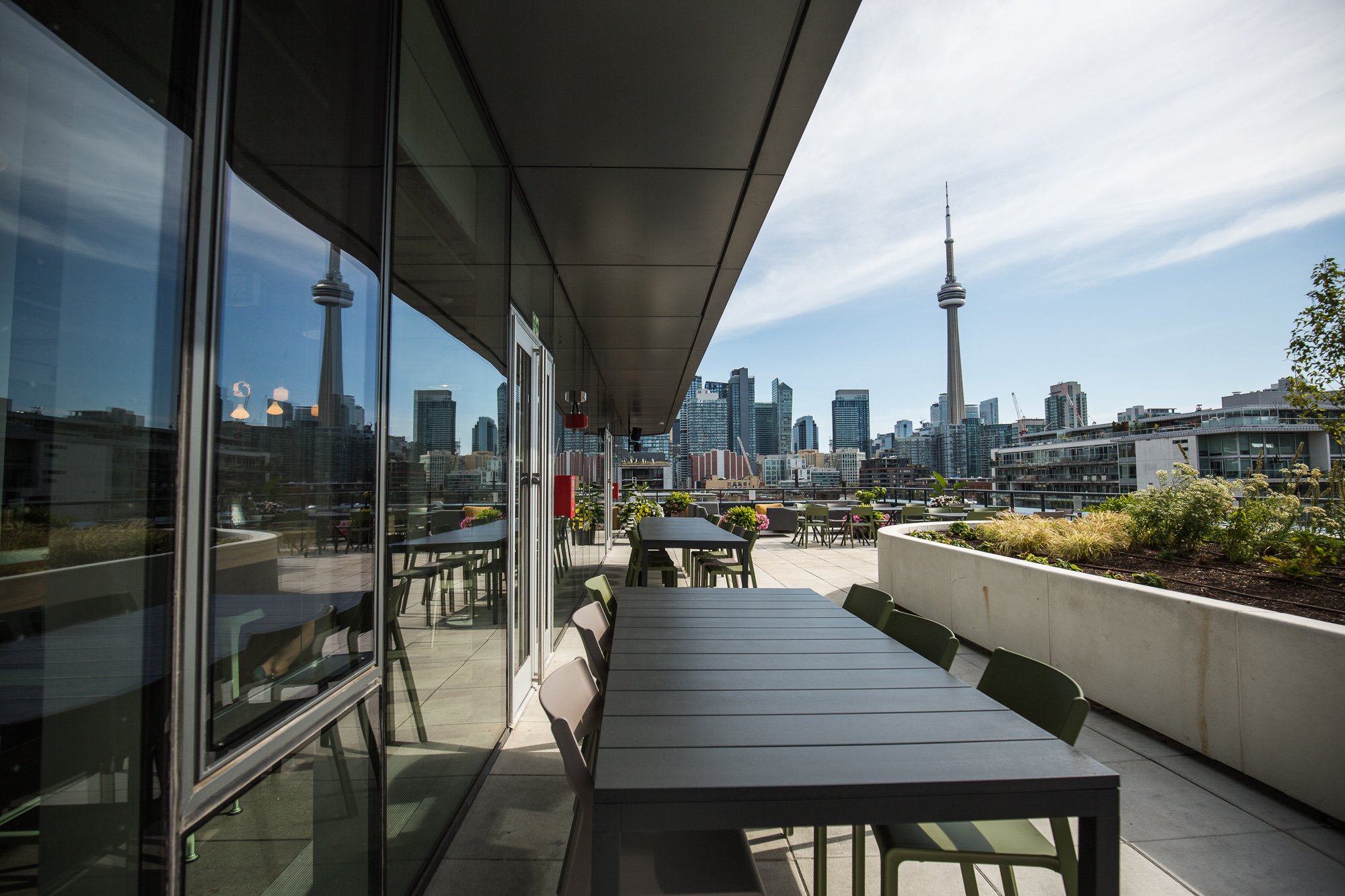 This is the rooftop terrace, which has a green roof. As winter’s on its way, they decided to wait until next year to add outdoor furniture: 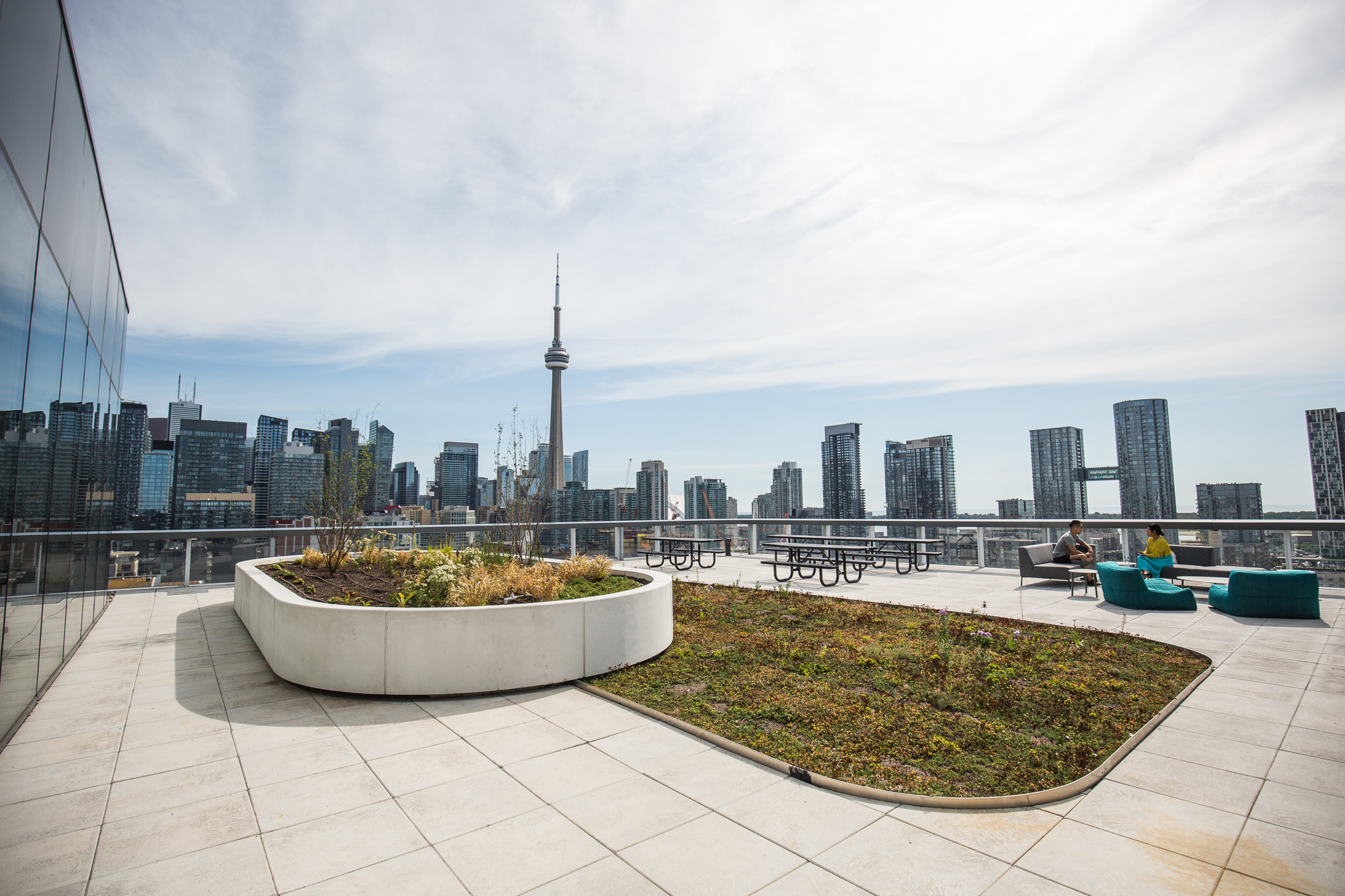 The 14th-floor lounge is a social space with a bar area and a fireplace. The mural was painted by Pascal Paquette: 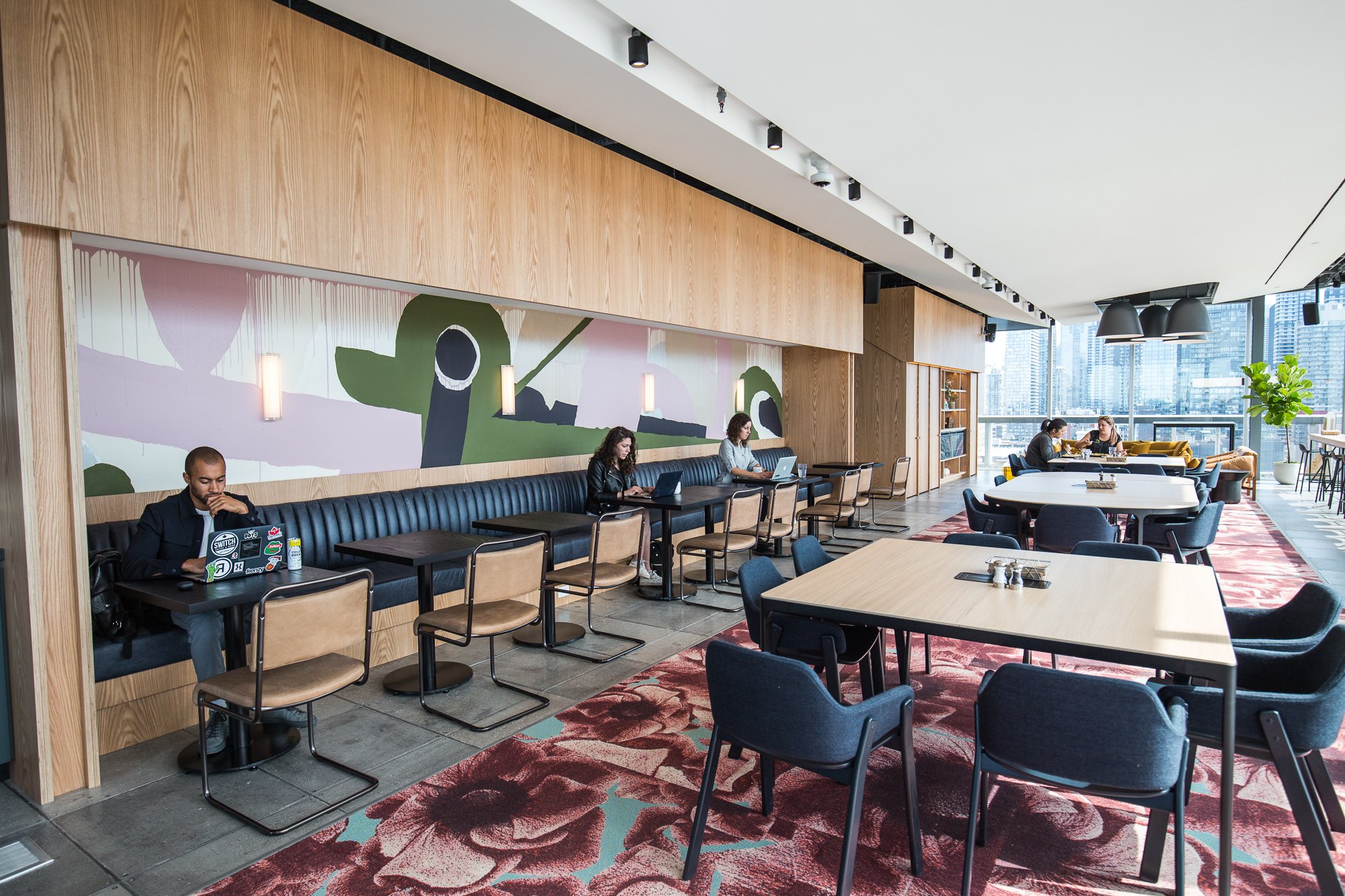 The bar is equipped with an oven, which gets used regularly by Shopify’s baking club: 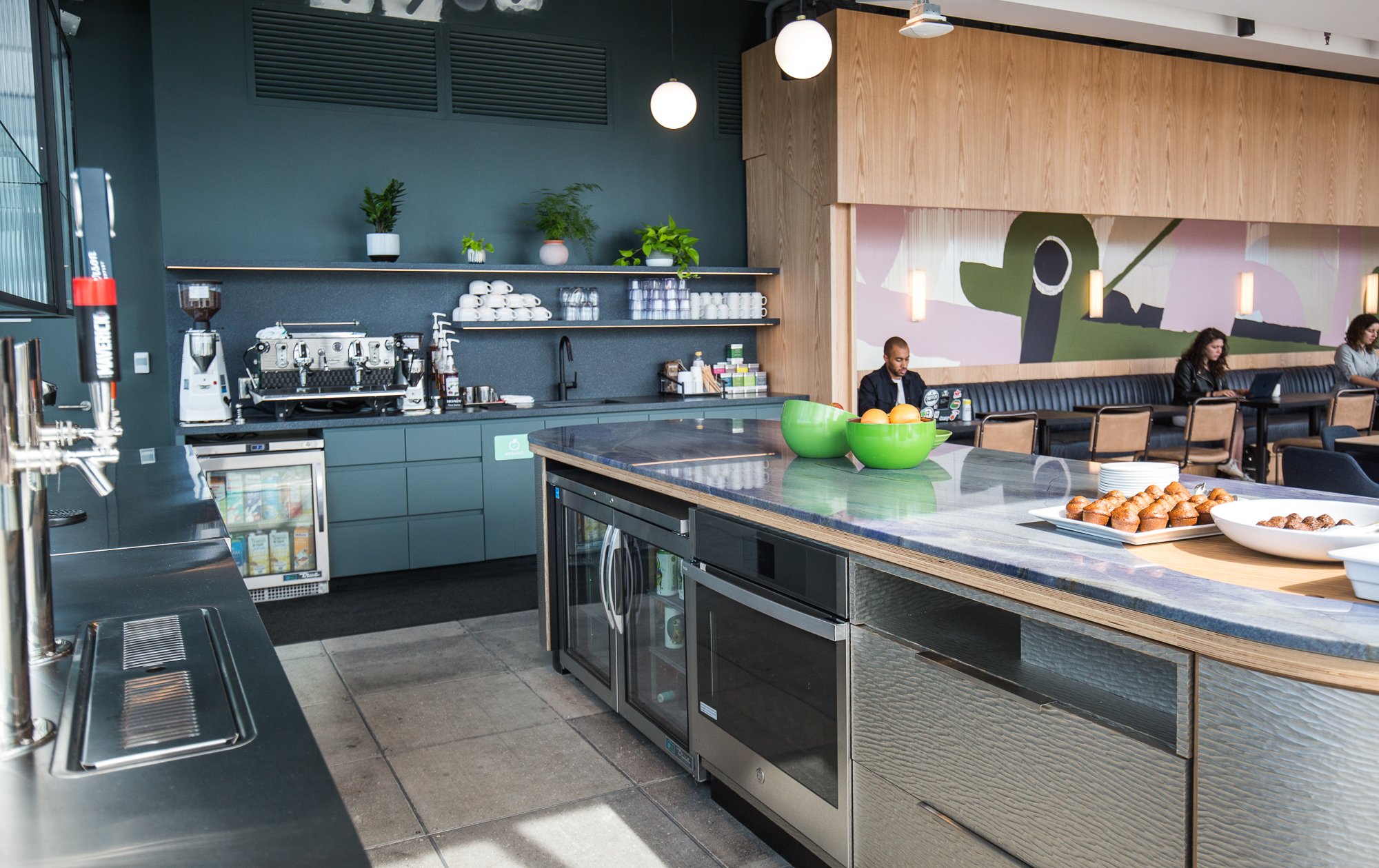