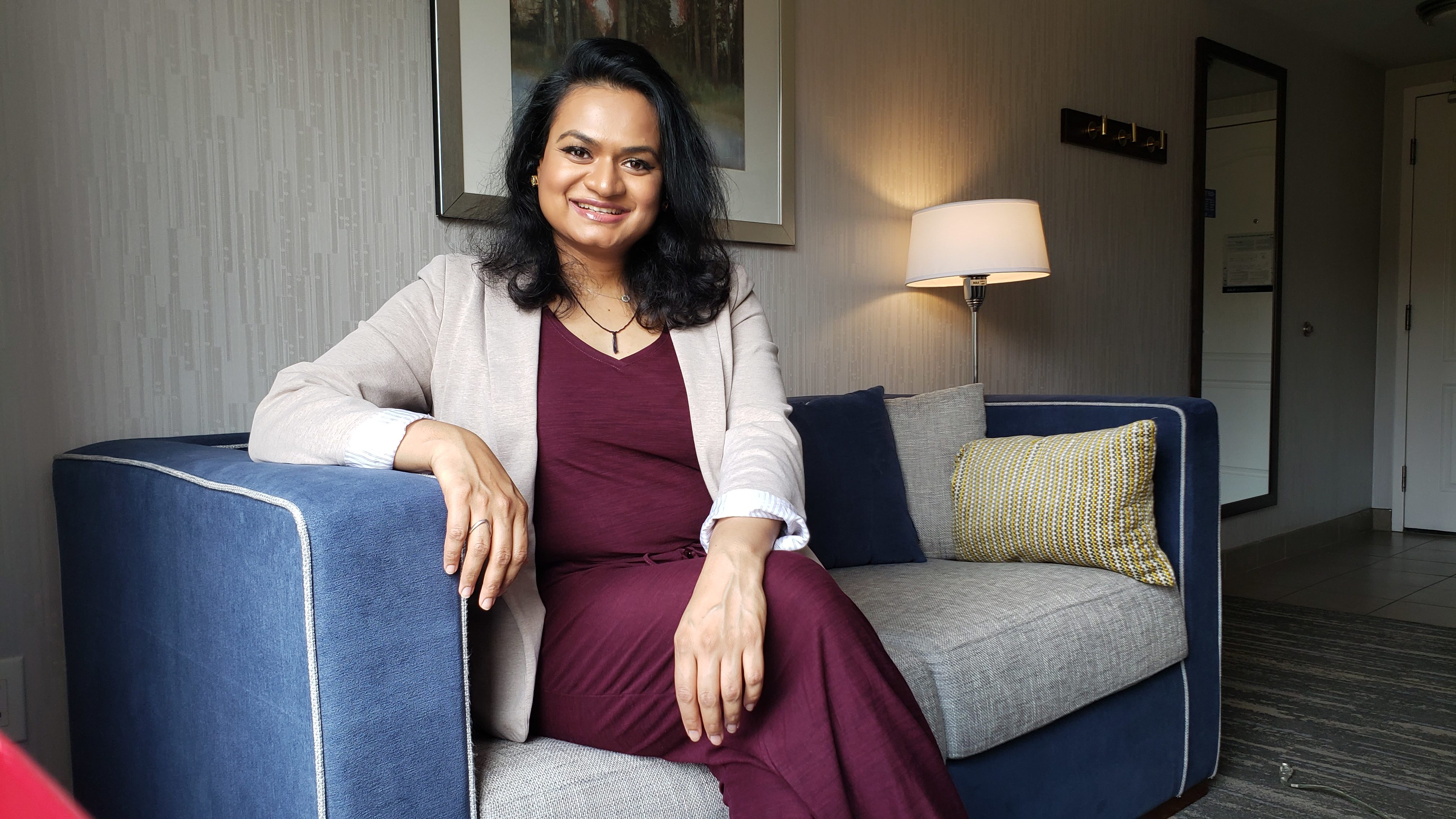 In March, Brampton-based pharmacist Aska Patel got an email from her employer asking if she’d volunteer to work in a hospital that was hit hard with Covid. Patel agreed, and in April, she was redeployed to the Royal Victoria Regional Health Centre in Barrie. Here’s how it all happened.

“I was born in India and immigrated to Brampton with my parents in 2000, when I was 12. In high school, I volunteered at a pharmacy to complete some of my community service hours. I watched how the pharmacists talked to patients about their health and I saw how much the patients valued their guidance. I decided this was the job for me. I now work for Home Community Care Support Services Central West in Brampton as a consultant pharmacist. It’s a really rewarding position because I get to consult with patients one-on-one to help optimize their medication therapy. I mediate between the community pharmacist, the family physician and any other specialists—I think of myself as a patient advocate.

“During Covid, we moved most of our appointments online or over the phone, and I still visited some patients in person if they had severe issues or didn’t have someone to help them get online. By the time the third wave hit, I was watching the headlines about how overwhelming it was for front-line workers. I wondered whether I was really giving 100 per cent as a health care provider. In mid-March, our CEO sent out an email to everyone in the organization, asking if any of us were willing to be temporarily redeployed to other roles to help with the fight against Covid-19.  I thought to myself, I have to do something. I was excited—it was finally my opportunity to play my part on the front lines in this pandemic. The next day, I volunteered to help. I said I was willing to help out in any role, at any hospital. I don’t have any dependants or kids to care for, so I could be more flexible in how I could help out.

“By mid-April, I was matched with the Royal Victoria Regional Health Centre in Barrie as an alternate care provider. We had a full-day virtual orientation to learn about the different departments in the hospital, safety procedures and how to transfer patients. One of the most difficult and challenging tasks I learned was how to mobilize patients if they needed help getting from their bed to a chair or the washroom, or if they needed their sheets changed. I also learned how to identify the signs and symptoms of cardiac arrest and code blue protocol. As a pharmacist, I’ve rarely had to engage that fight-or-flight response—especially when a patient’s condition can change or deteriorate so rapidly.

“The first day, there were 12 of us who’d bee redeployed from all over the GTA. There were kinesiologists, social workers, physiotherapists and home care nurses. I chose to work on the cardiac and renal floor. There were three other people from my group working on that floor, and they were all home care nurses. At first, we shadowed the cardiac nurses for a couple of hours to learn about what they do and how we could help. We can’t administer medications, give medical updates or draw blood. But we can assist with feeding, help patients call their family members, or accompany them from one place to another. We also learned how to input information about a patient’s condition, like if they only ate 25 per cent of their meal while we were feeding them. In that first half-day on the floor, I walked about 10,000 steps. It was exhausting.

“I could tell that the hospital staff were stressed and burnt out. Every bed on the cardiac floor was always full during my shifts. I heard that the number of Covid patients in the hospital went up from three to 30 between March to April and that they transferred 50 patients to other hospitals to alleviate the burden. I also heard the hospital hired 16 home-care workers and asked more than 45 final-year health-care students to help out. Initially, there was some apprehension from the regular staff about having us on the floor. I’m sure they thought, Do we just ask you to do things? But over the course of our first day there, we worked out a routine. When a patient hit the call bell for their nurse, I would go to the patient to see what they wanted. If it was something like calling a family member, I would help. Otherwise, I’d get their nurse to come in. During one night shift, I stayed with a high-risk patient one-on-one for 12 hours. If I hadn’t been there to watch that patient, it would have been a nurse’s responsibility. So I know they were grateful for the extra pair of hands.

“I’ve had some nice interactions with the patients so far. A lot of them are just lonely and want someone to talk to. On my first day, I spent time with a patient who was on the unit because she had a fall and suffered from low blood pressure. She was getting a blood transfusion done and was feeling a little anxious about it. So I diverted her attention by talking to her about her family and what she’s looking forward to doing once she gets out of the hospital. By the end of it, she said, ‘Aska, make sure you come in and say hi to me tomorrow morning when you start your shift because I will not have it any other way.’ That makes you feel like you’ve done something right, that somebody appreciates that you took the time to talk to them.

“There’s another patient on the floor who has dementia, so he’ll often leave his room and roam the floor. One day, I saw him out in the hallway and he was asking for a coffee. I engaged him in conversation, redirected him to his room, then went to get him a coffee. He said, ‘You’re quicker than the other ones.’ And I was like, ‘That’s because I don’t work as hard as the other ones do.’ I’m not used to working 12-hour shifts, so it’s definitely exhausting. The most steps I’ve tracked in one day was 14,000. It’s harder work than I expected, especially the night shifts since my body isn’t used to working at night. This work is also much more physically demanding than my usual pharmacist role. I think my arm muscles are becoming more defined after a week of mobilizing patients. Every shift feels like a 12-hour workout.

“I’m on a schedule now where I work two- or three-day shifts, then I get two days off. I work night shifts too. I work 7 to 7, whether the shift starts in the morning or the evening. When I’m working, I’ll stay overnight in a hotel so I don’t have to drive all the way back to Brampton. The first few days, I was very, very tired. I had no trouble falling asleep at night. But I was still questioning whether I was the right person for this role. I was so overwhelmed. Would I be able to make meaningful change? Would I do justice to this work? I shared my concerns with the manager for the regional pandemic response unit, and she reassured me that my contributions were valuable and that other non-nursing professionals redeployed to this role were feeling uncertain too. We were all navigating this new situation together.

“I’ve been here a week so far. After a month, hopefully, the case counts will subside and I’ll go back to my regular job. If they still need me here, I’ll stick around. I lost my grandmother two years ago, and I didn’t get to spend much time with her before she became palliative. I wish that I was able to do more for her. So this is my way of trying to help as much as I can. If I’m taking care of somebody else’s grandmother, I can find peace with that.”