I inherited a lot of fabulous attributes from my mom — good hair, a sense of humour, a love of music — but there was one thing I would have been happy to avoid: A degenerative bone condition that left me barely able to walk

The following story is a sneak preview from the upcoming edition of Latitude, a magazine that meets canna-curious women where they are now—talking about health, laughing about adventures in weed, and sharing notes on the films, books and art that inspire them most. To get exclusive content and order your copy of Latitude, click here.

My mom and I share a lot of traits: We love silly dancing, hate peas and walk with the same slight waddle as a result of hip replacement surgery, which means we also share the knowledge of what it’s like to live with debilitating pain.

In my late teens (I’m now 32) I was diagnosed with a degenerative bone condition called multiple epiphyseal dysplasia, which meant that the cartilage protecting my hip joints was rapidly deteriorating. At 18, I could barely keep up with my pals. Most of the time, I was too embarrassed about my limited abilities to say anything, so I’d push myself and end up unable to get out of bed the next morning from overwhelming pain and stiffness.

This challenge wasn’t news to me: Multiple epiphyseal dysplasia is genetic and runs in my family on my mother’s side. My mom, Brenda, my late grandma, Gladys, and my brother, Matt, all shared the same surgeon. Mom had her first hip replacement when I was two years old, followed by years of surgeries on her hips, shoulders, wrist and more.

I started showing signs of the disorder in my mid-teens. The Hospital for Sick Children in Toronto did a study on our family to see if they could isolate the gene responsible for carrying the disease. Family members who had the disorder had an X beneath their name —under my own, there was a question mark. But by the time I was about to finish high school, X-rays showed that I, too, would need to have the surgery at some point.

One night, when we were both home from college, my brother Matt rolled a joint to for us to share. We had smoked together a few times before and started talking about how much it helped with pain, which was a pleasant side effect separate from just having a giggle with friends. Even though Matt and I knew my parents had smoked weed in their 20s before we were born (we’d heard their stories), it was clear my mom wasn’t happy about us sneaking out to smoke. Matt explained that it helped with his pain; she seemed skeptical, but let it slide.

On an early winter morning in 2010 at the age of 22, I checked in to Toronto’s St. Michael’s Hospital for a bilateral hip replacement, where both joints are replaced during the same surgery. The surgery lasted for more than six hours and I was put on a morphine pump the morning after to cope with the intense pain. My best friend remembers me waking up on the third day of my recovery, looking at her and crying. When she asked me what was wrong, I tearfully replied, “I can’t put my socks on.” I don’t remember this exchange. It was one of many opioid-induced hallucinations I blurted out during my recovery; I started telling visitors to ignore my mumblings because I knew I was having waking dreams. During my last week in the rehabilitation facility, I asked the nurses to start lowering my dose of morphine each day —I was worried because there’s a history of addiction in my family and I didn’t want to develop a dependence.

I moved back into my parents’ house after the operation and spent the next four months recovering in my old bedroom, watching my dad’s This Is Spinal Tap and A Hard Day’s Night DVDs. I used two crutches to hobble around, I wasn’t allowed to bend over, and I had to do painful physiotherapy exercises a few times each day. As well as being sent home with crutches, I had been given a bottle of 30 morphine tablets to help with the pain from the stiffness and swelling (imagine feeling like your hip joints are on fire), as the two longest bones in my body healed from the surgery. I was a wreck on the stuff. I used it to help me sleep —the pain was so intense I’d be awake all night otherwise. After a few days I asked my mom to get rid of them. Having them so readily available freaked me out. With my doctor’s assistance, I started to wean myself back down to Oxycontin and then Tylenol 3s. 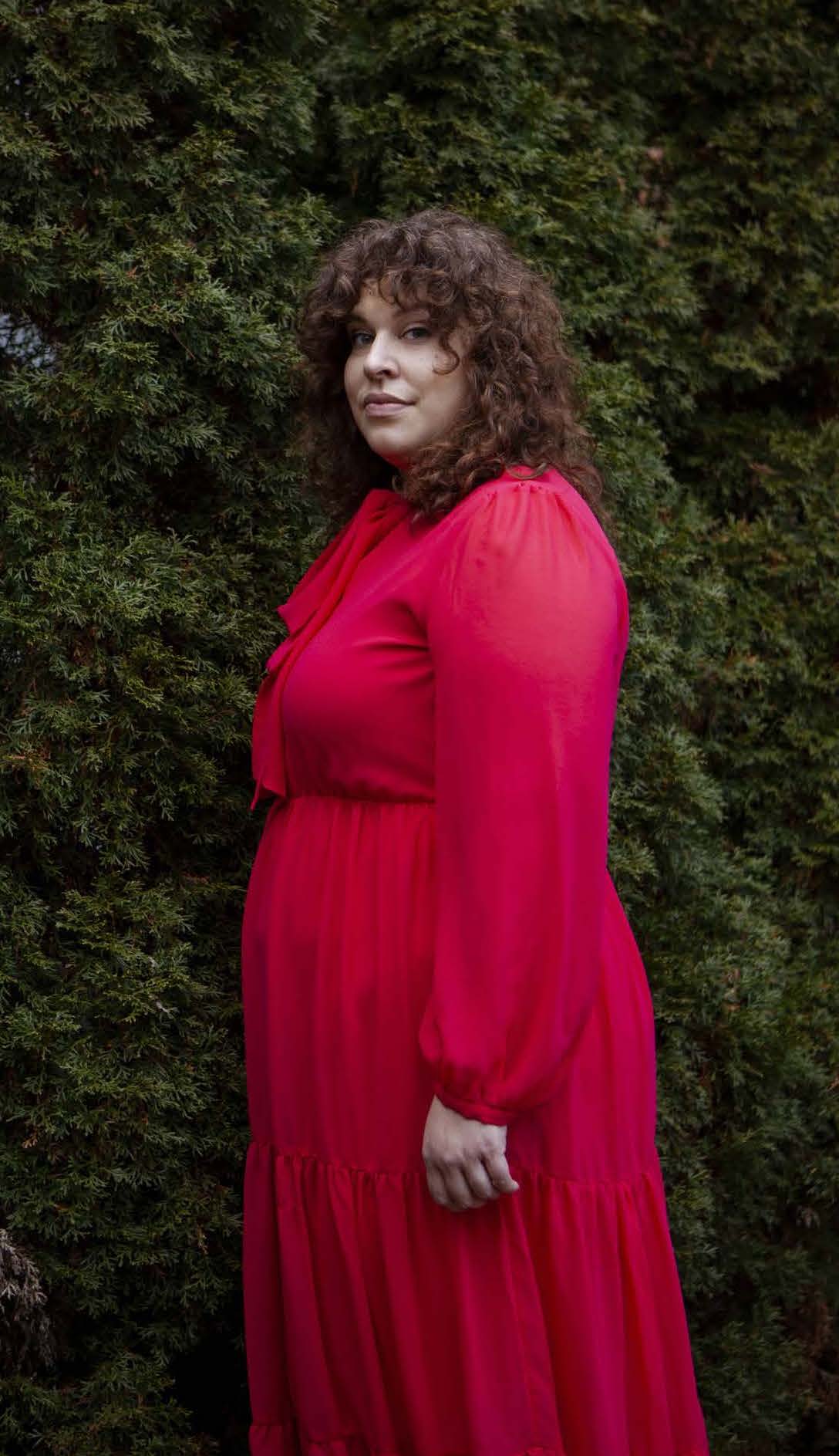 The autumn after my operation, once I was off opioids, I started smoking weed again. Soon, I was only taking some Tylenol for the pain. In 2014, four years after my surgery,

I finally worked up the nerve to ask my family doctor for a referral to the cannabis clinic around the corner from my place. The doctor there recommended I try strains that were mostly CBD, versus THC, to help with pain from inflammation. (Though the surgery gave me so much relief, I still dealt with chronic pain from time to time.) The first time I tried a CBD strain, it felt like my entire body took a deep sigh. I felt a physical release of tension as the pain eased up. It was like a body high that took the hard edge off and relaxed my muscles. I immediately spoke to my mom about how amazing the effects were.

My mother has a ridiculously high pain tolerance. She rarely complains about her pain, or lets it affect her daily routine. Growing up, she was always playing with us, letting us snuggle next to her on the couch, taxiing us from playdate to playdate. “I had to keep going. There was no choice. But I couldn’t function without painkillers. I would have been in agony,” she said. I only remember a handful of times where I was aware of how much pain she was really in. Once, I found her quietly crying in her bedroom, and I immediately started crying with her—I instinctively knew how excruciating the pain must have been for her, in order to break down like that.

About a week before my surgery, my mother ended up in the hospital. We called an ambulance one evening after she became pale, sweaty and dizzy. I stood in the corner of her room while the paramedics did an ECG to make sure she wasn’t having a heart attack. After 10 hours, an ultrasound showed that she had a severe ulcer in her stomach. She was told she would need surgery to repair it and spent the following week in hospital on an IV medication to help her heal. She and her surgeon figured out that the ulcer appeared because of NSAIDs (non-steroidal anti-inflammatory drugs), like naproxen and ibuprofen. She’d stopped taking those medications for about 10 years because of the association with stomach issues. But in the month before her hospital stay, she had taken two prescription-strength NSAIDs. It was enough to cause the ulcer to start bleeding.

After that, my mother stopped taking anti-inflammatory medications. To supplement them, her doctor continued to increase her dosage of opioids. By the time she needed her shoulders replaced in 2016, her doctor had her on 30 mg of time-released Oxycontin. “I asked [the doctor], ‘Isn’t that a lot?’ And she said no, that’s not a lot—they go up to 80 mg,” Mom recalls. In the medical world we were in, prescription opioids were promoted as low-risk, non-addictive, effective treatments for pain. No one really talked about the nasty physical side effects, including vomiting, constipation, loss of appetite and sweating. Not to mention mood swings and addiction. My mom was on her umpteenth surgery and was fully dependent on painkillers to get through her day.

When my mother checked out of the hospital, the surgeon sent her home with a prescription for 30 Percocet. Canadians had realized the country was in the midst of an opioid crisis and physicians everywhere flew into a panic over prescribing them —my mother was an unwitting victim. “The doctor just told me to take over-the-counter Tylenol as needed,” she says. Naturally, she was angry and hurt. “My doctor had me depending on this medication and then I go to the hospital and all of a sudden, I’m treated like a drug addict when I ask for it. I never abused it; I never took more than I should, and I always took them at the right time.” That was the final straw for her, and she decided she needed to get off the pills. Over time, she began to reduce her use of opioids, in consultation with her doctor, who lowered her dosage to 10 mg, then 5 mg and then 2.5 mg. Her step-down program helped her avoid withdrawal symptoms.

So now my mom was marooned with her pain without any proper medication. And she wasn’t sleeping. She hadn’t, in fact, slept through the night in at least 15 years. “That was the hardest part. If you’re not sleeping, you’re not able to cope with the day-to-day —you’re tired and cranky all the time,” she said. She was sent to a specialist, who then sent her to a sleep clinic. The specialist concluded that she didn’t have sleep apnea —her sleeplessness was due to her pain. He figured it out when he noticed her legs jerked way more times than was normal during the night. Knowing I had my prescription for medical marijuana, she asked him if it could help her sleep too. He agreed emphatically and recommended a high dose of CBD. Finally, after a lifetime of stomach-damaging pain medication, my mother was prescribed medical marijuana in 2017.

When she got her first delivery of cannabis, she mixed the ground-up flower into coconut oil and took a spoonful. “It definitely helped with the pain,” she says. “And I slept way better. It relaxes you. The more tense you are, the worse the pain is.” Before, when the painkillers wore off, my mother’s whole body would ache. “Not just where I was affected in my joints—all over. I would wait the entire eight hours as instructed to take my next pill and still go through withdrawal.”

Today, my mother is off painkillers completely, other than an occasional regular-strength Tylenol as needed. She takes her oil before bed (one blend of THC with a little CBD, and one with CBD that has little THC) and if she’s having a bad pain day, she’ll take a few milligrams of CBD to relax and reduce tension. I also sleep a lot better these days—not just because of cannabis, but because I can rest assured that my mom is getting the relief she’s always needed.