Jens Burgen is a wilderness nut who has camped on almost every continent, led salmon tours through the Queen Charlotte Islands and operated juicing retreats in Northern Ontario. In 2014, he bought a patch of Prince Edward County and transformed it into a camp, organic farm and hyper-local brewery that grows hops and 130 varieties of veggies, herbs and edible flowers. The place features 10 log-framed tent suites with hardwood floors and indoor bathrooms. Each tent is designed to reflect an aspect of Canadian history: a 1770s-style prospecting hut has deer and elk antlers and a stone fireplace; a WWI-era medical tent features vintage whitewashed cabinets and medicinal herbs in glass vials; and the speakeasy tent has a tufted-leather couch and a shower spout made out of a whiskey jug. The activities are as seductive as the cozy tents: guests can pick fresh veggies to cook for dinner, bike the P.E.C. countryside or enrol in on-site soap-making workshops. The Homesteader tent is inspired by 19th-century P.E.C. farmers. The working Findlay Oval stove dates back to 1910: La Bohème was inspired by the itinerant lifestyle of Upper Canada Loyalists. The clock is a Burgen family heirloom from Germany: This one’s the Crosswind: Burgen buys many of his antiques at Dead People’s Stuff in nearby Bloomfield: This one’s called the Royal Coachman: And here’s the Heirloom tent: Each tent has its own outdoor dining area: Guests feast on meals made with produce from the on-site farm: And the tents all have heated outdoor showers like this one: 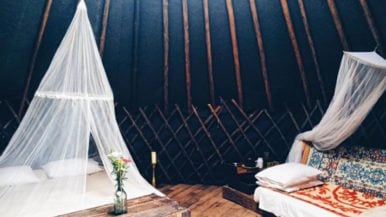 See inside Buffalo Farm, a glamping retreat where you can stay in a yurt

A former buffalo farm is now a luxurious campsite 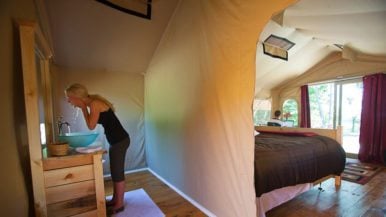 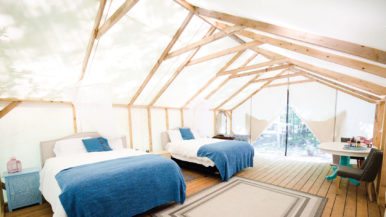 A look inside Elements, a safari-style glamping destination in a former theme park

With a yoga studio where the roller rink used to be 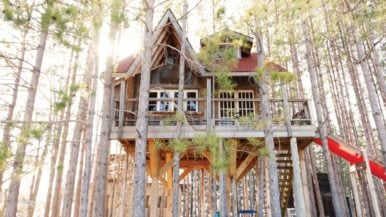 A look inside a designer treehouse getaway in Durham