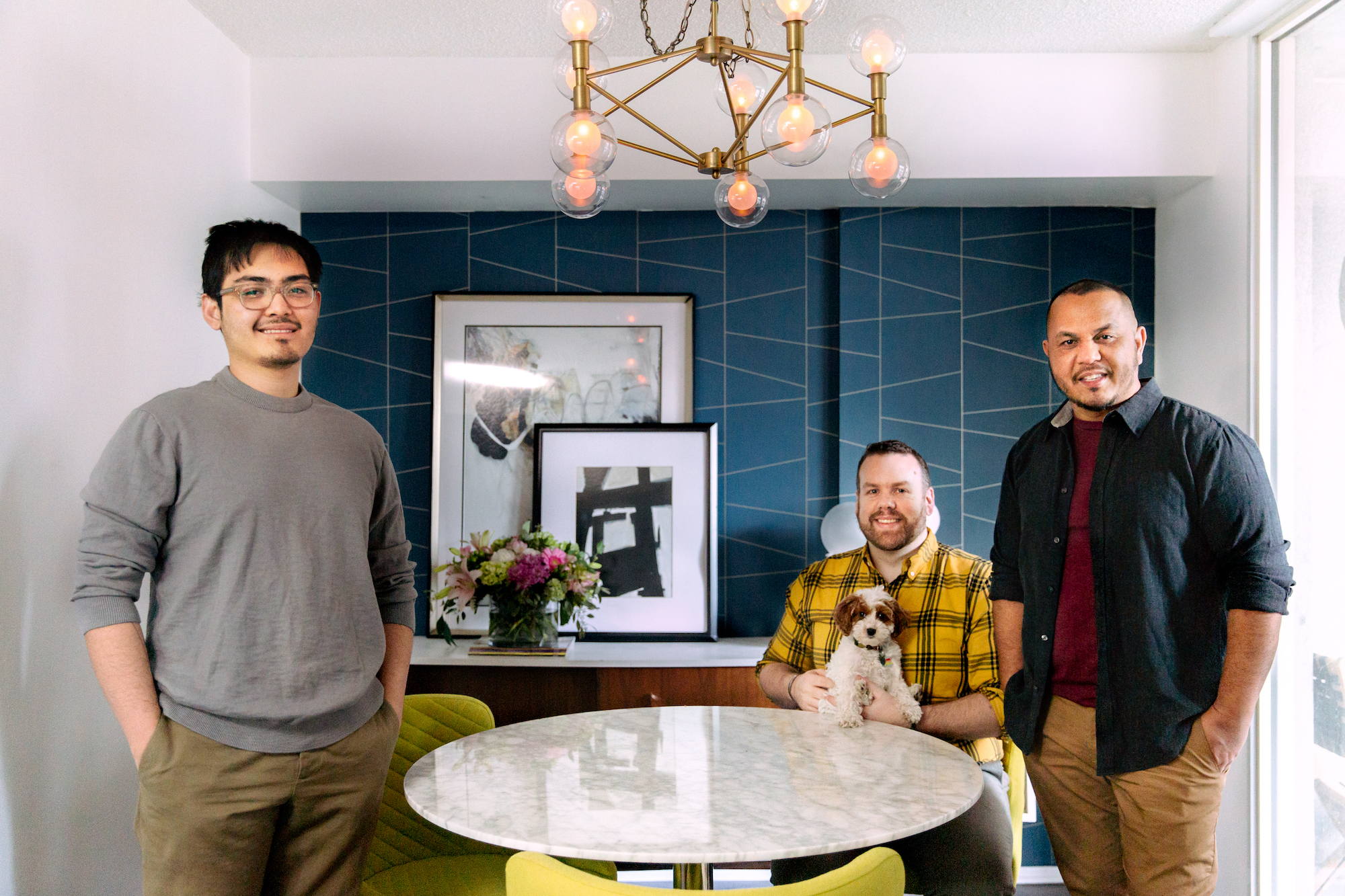 Red moved from the Philippines to Canada in 2004, and he frequently returned home to visit his son, Gabe. By 2019, Gabe had finished high school and was ready to move to Toronto to study graphic design. At the time, Red owned a one-bedroom condo in the Garden District, and his partner James owned a similar unit at Bay and Wellesley. They sold their condos and bought a bigger space for their blended family—a three-bedroom, one-and-a-half-bathroom space in Red’s neighbourhood.

After moving in, the couple turned the spare bedroom into a home office for Red. In the months leading up to the pandemic, the family weren’t spending much time together. James worked downtown, Gabe usually studied in his room or at school, and Red spent most of his days at his Scarborough office and warehouse.

Then, in March of 2020, the pandemic arrived and the Barrinuevo-Thompsons had to transform their condo into a school, office and entertainment zone in one. Red decided to upgrade the dining room with better furnishings and convert the spare bedroom into a home-office-slash-hangout space to fit the family’s new routines. Red and James used to be habitual restaurant diners, but after Covid, they started experimenting with new recipes, including bolognese and Nepalese curry—and they needed a proper space to enjoy the fruits of their labour.

James and Gabe were quick to vocalize their misgivings about the renovations, but Red insisted he knew what he was doing. “I can envision it in my head and I know it’s gonna be beautiful,” Red says. “Once everything was put together, they turned around and they were like, ‘Oh my God, this is gorgeous.’” He finished updating the dining room and home office by July of 2020, which made the following lockdowns more bearable. In the warmer months, a big outdoor balcony offered extra space.

The bar cart is from Homesense and the artwork above is from Urban Barn. While visiting his mom in Houston, Red found the monkey lamp at a flea market. He rewired it, painted it white and found an identical lamp on eBay which lives on the dining room credenza: 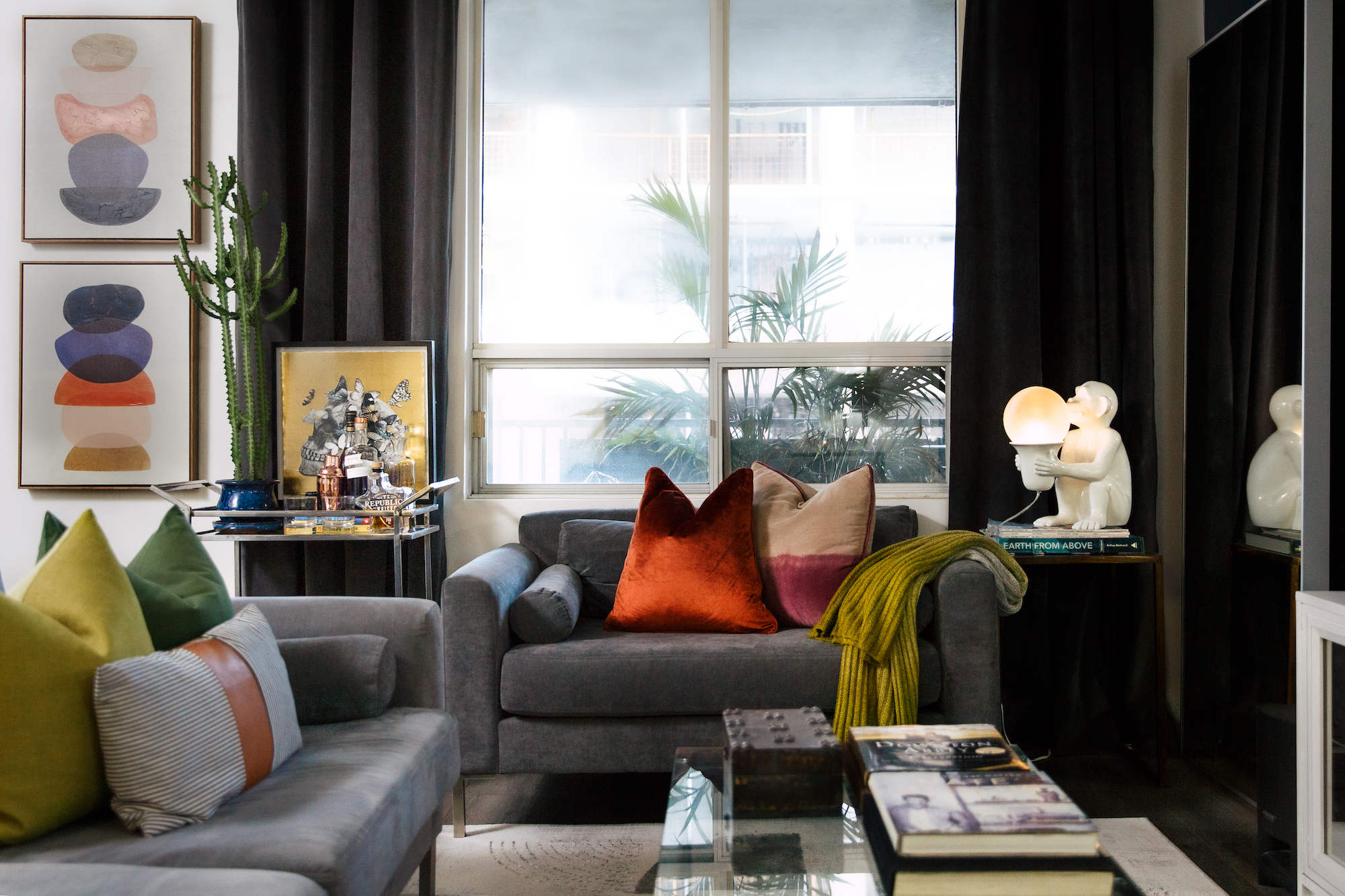 There’s blue wallpaper in the living room and the dining area. “Blue makes me smile. I find it very relaxing,” says Red. The entertainment console was a flea-market find in Cayuga. Red painted it white and replaced the door panelling with mirrors. He ordered a custom sofa with extra-deep seats for TV binge-watching sessions and movie nights. (They’re currently catching up on American Horror Story.) 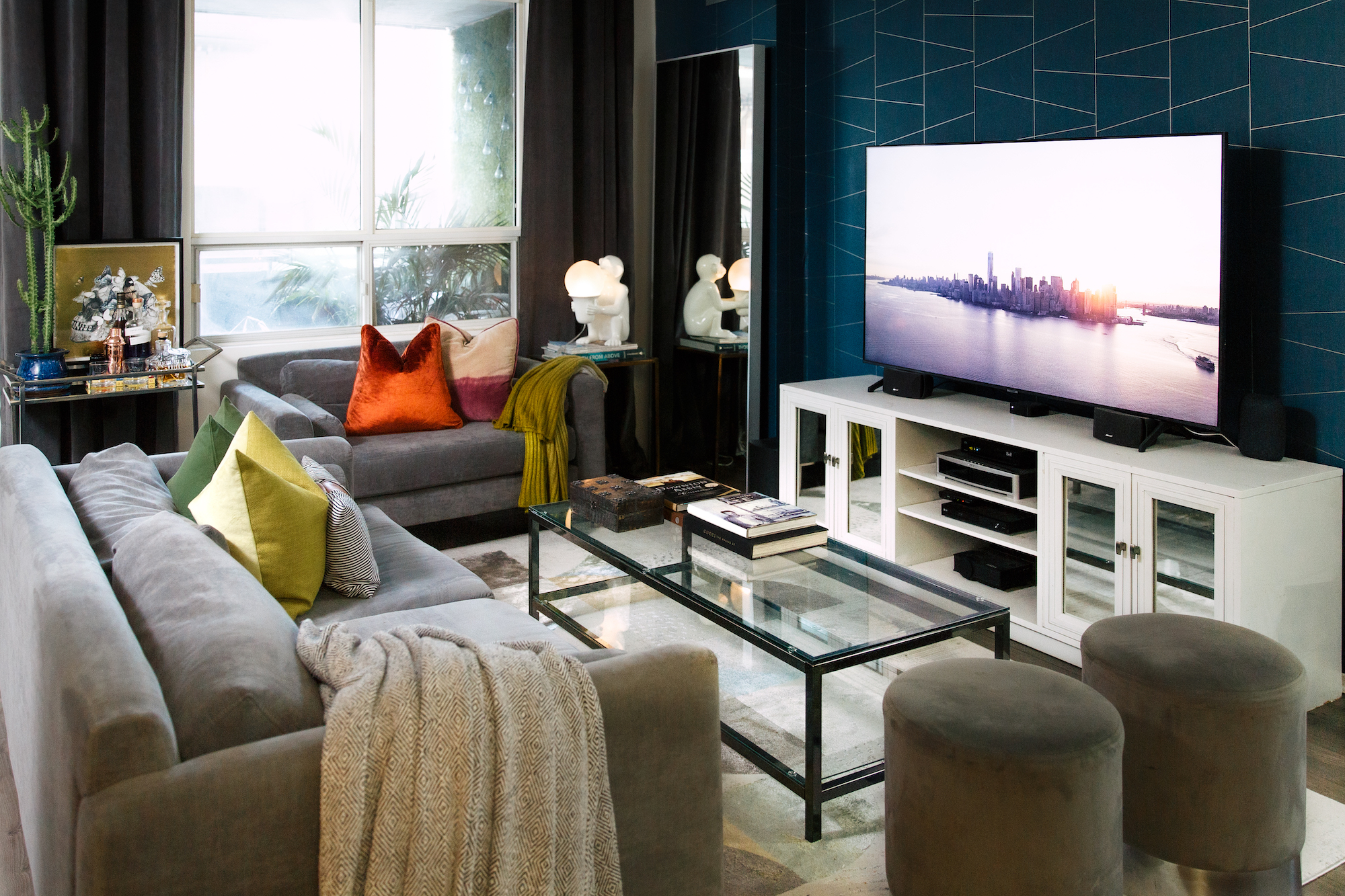 Red swapped out a simple IKEA dining set with a marble pedestal table from CB2 and olive-green chairs from Structube. He also brought in a credenza that he purchased at a flea market in 2015 and had been storing in his Scarborough warehouse: 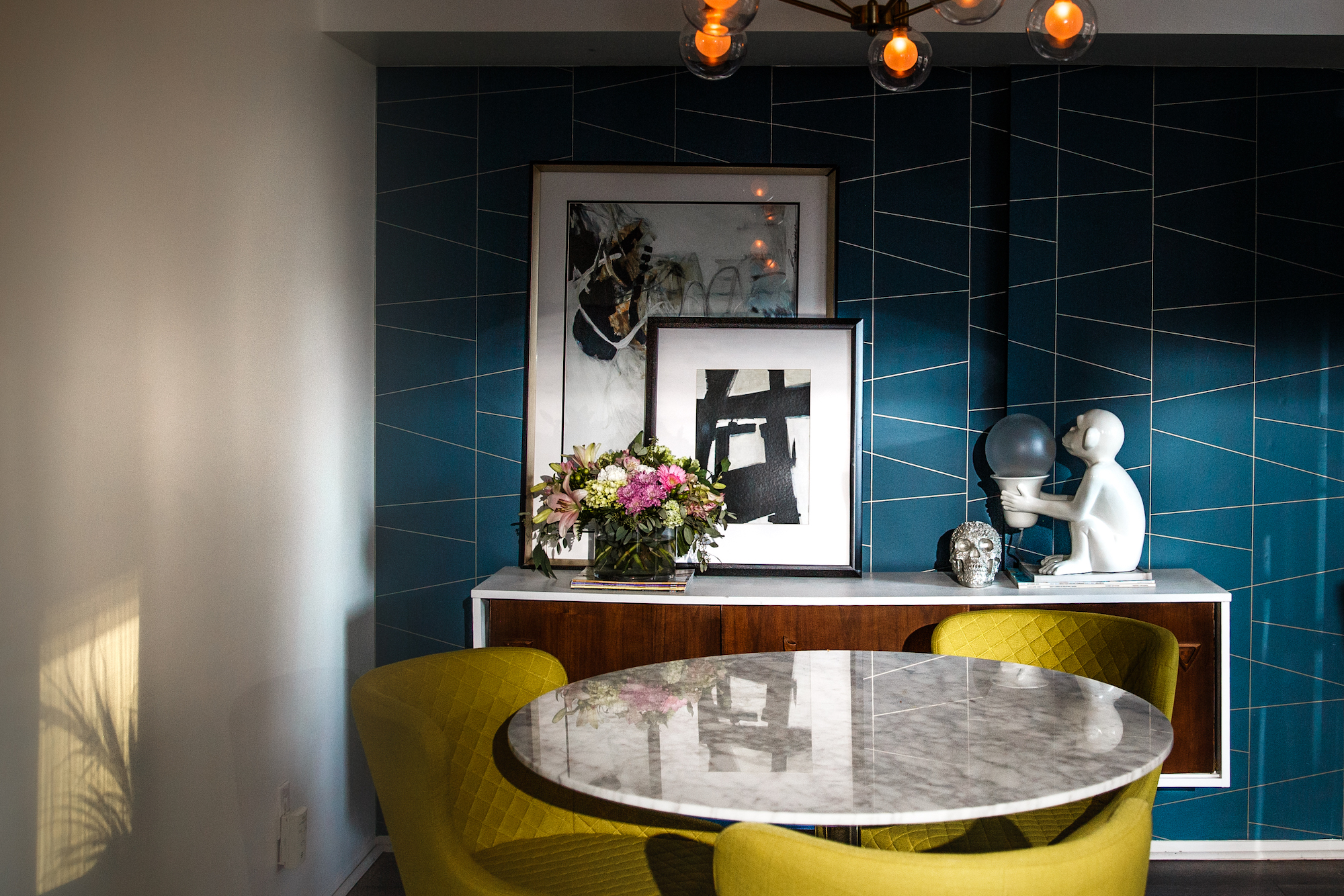 The gallery wall in the hallway includes a collection of images from the couple’s travels, including trips to Curaçao, Paris, the Philippines, Elora and the Scarborough Bluffs. Red will change the images about once a year as they visit new destinations: 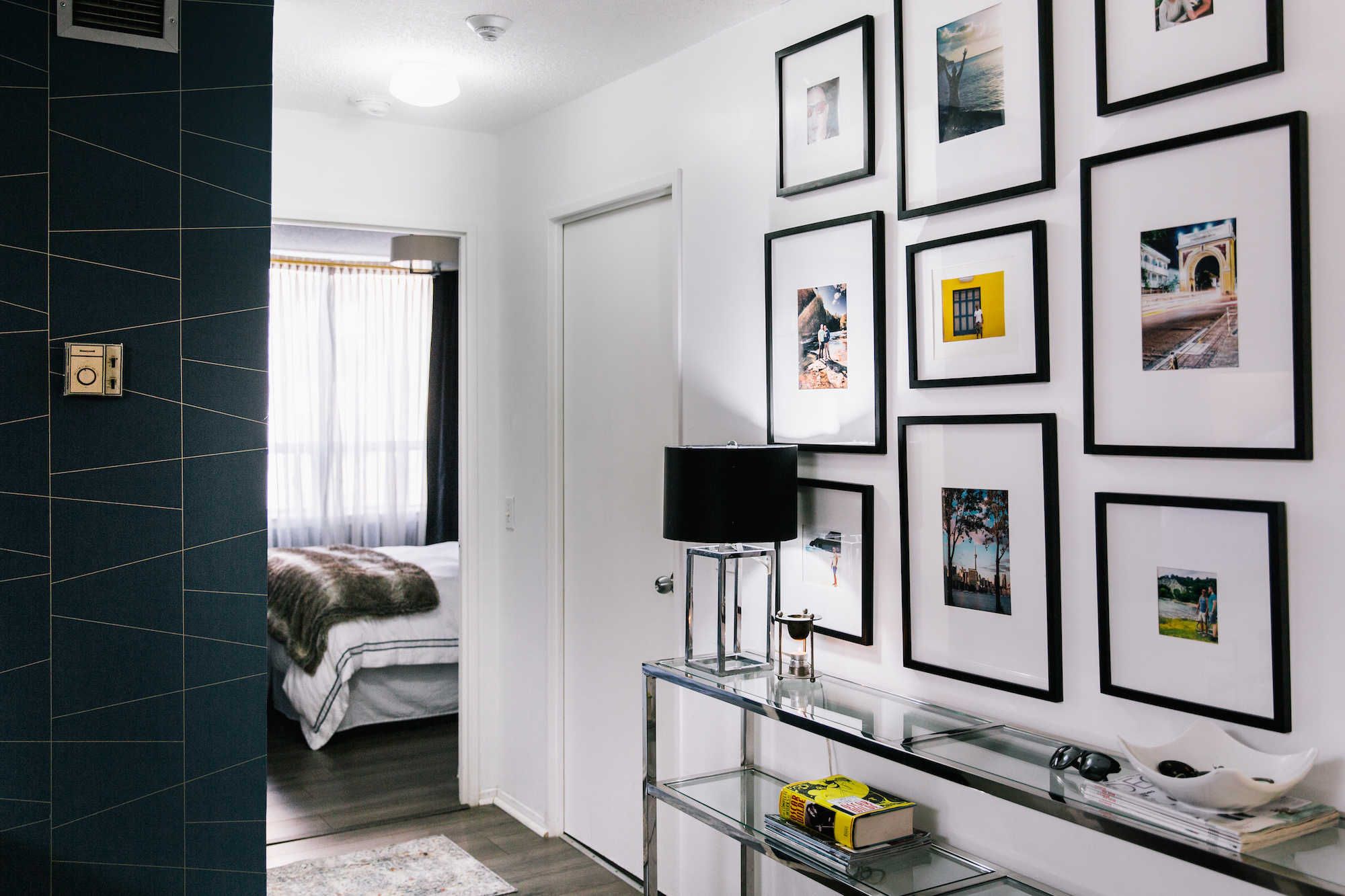 In the spare bedroom, Red added two cabinets for James and Gabe’s reading material. “The books were all over the place, and it was driving me crazy,” he says. Their collection includes The Complete Works of Oscar Wilde, Origin by Dan Brown and Daring Greatly by Brené Brown. “I can be at my desk and James will sit on the couch reading, and we’ll chitchat,” Red says: 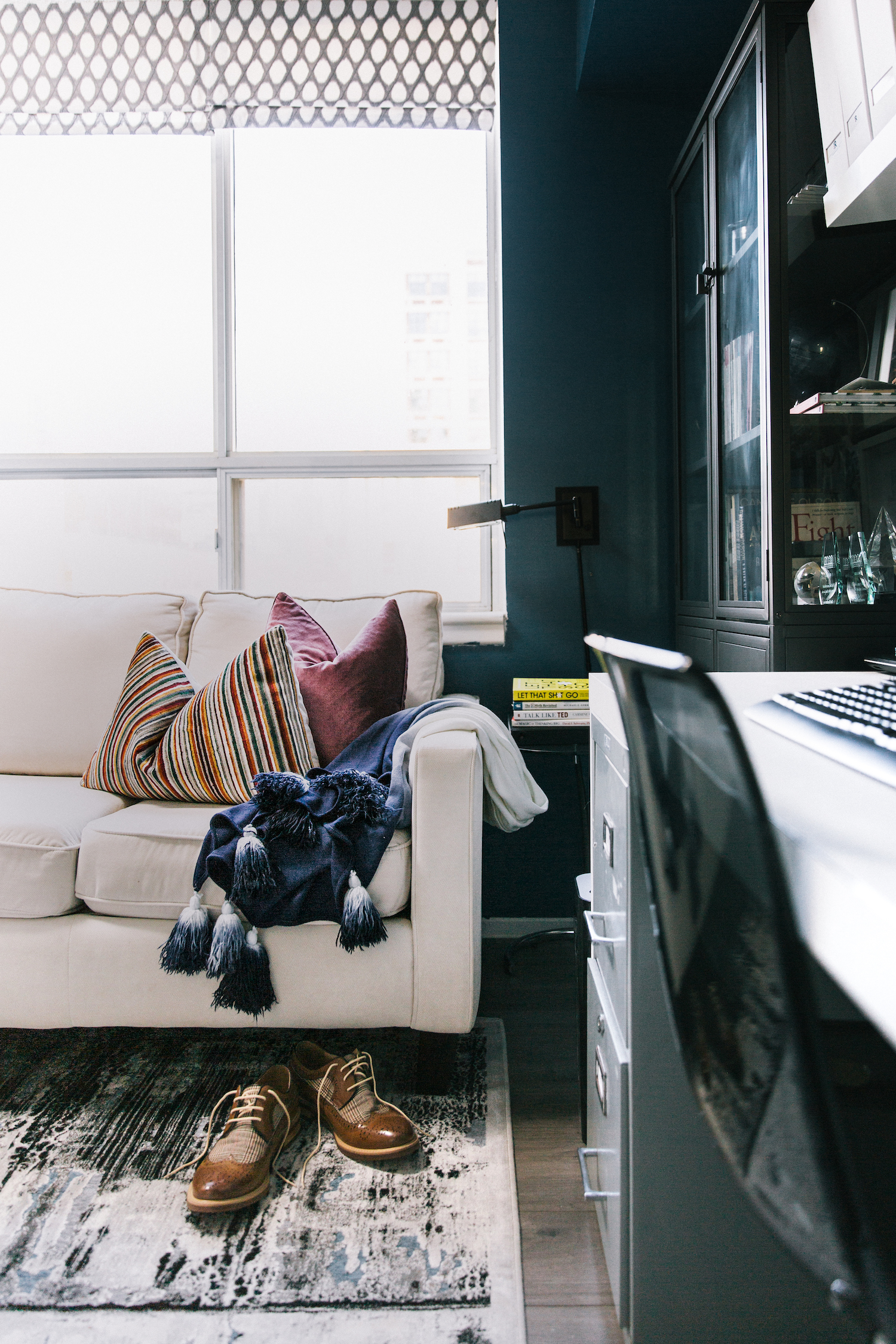 Pages from Elle Decor, House Beautiful and HGTV Magazine line the wall behind Red’s desk. The sea shells in the shadow boxes are from one of Red’s trips to the Philippines: 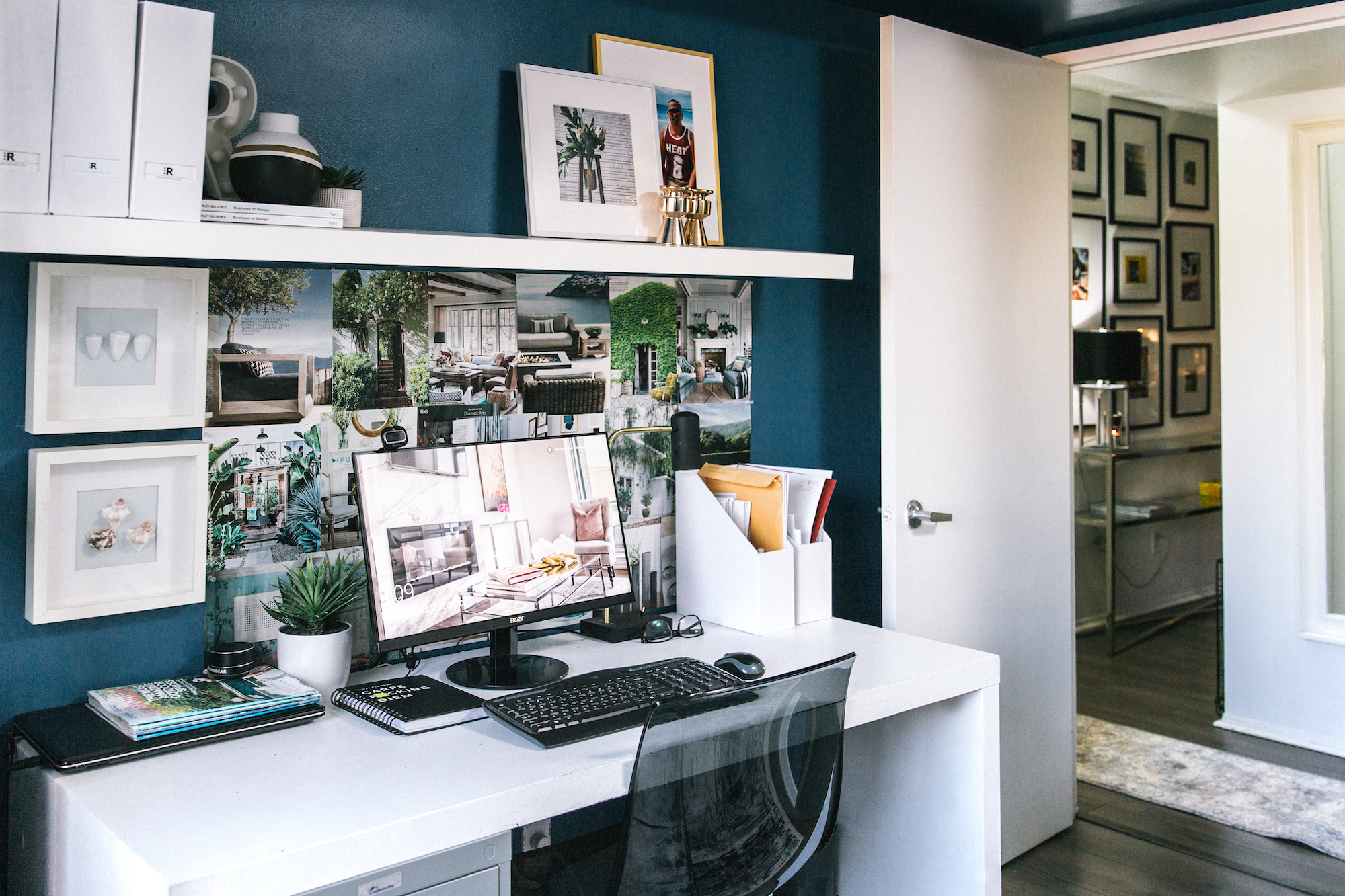 Red and James’s bedroom is also painted blue. Red swapped out the knobs on an IKEA dresser and paired it with a flea-market mirror: 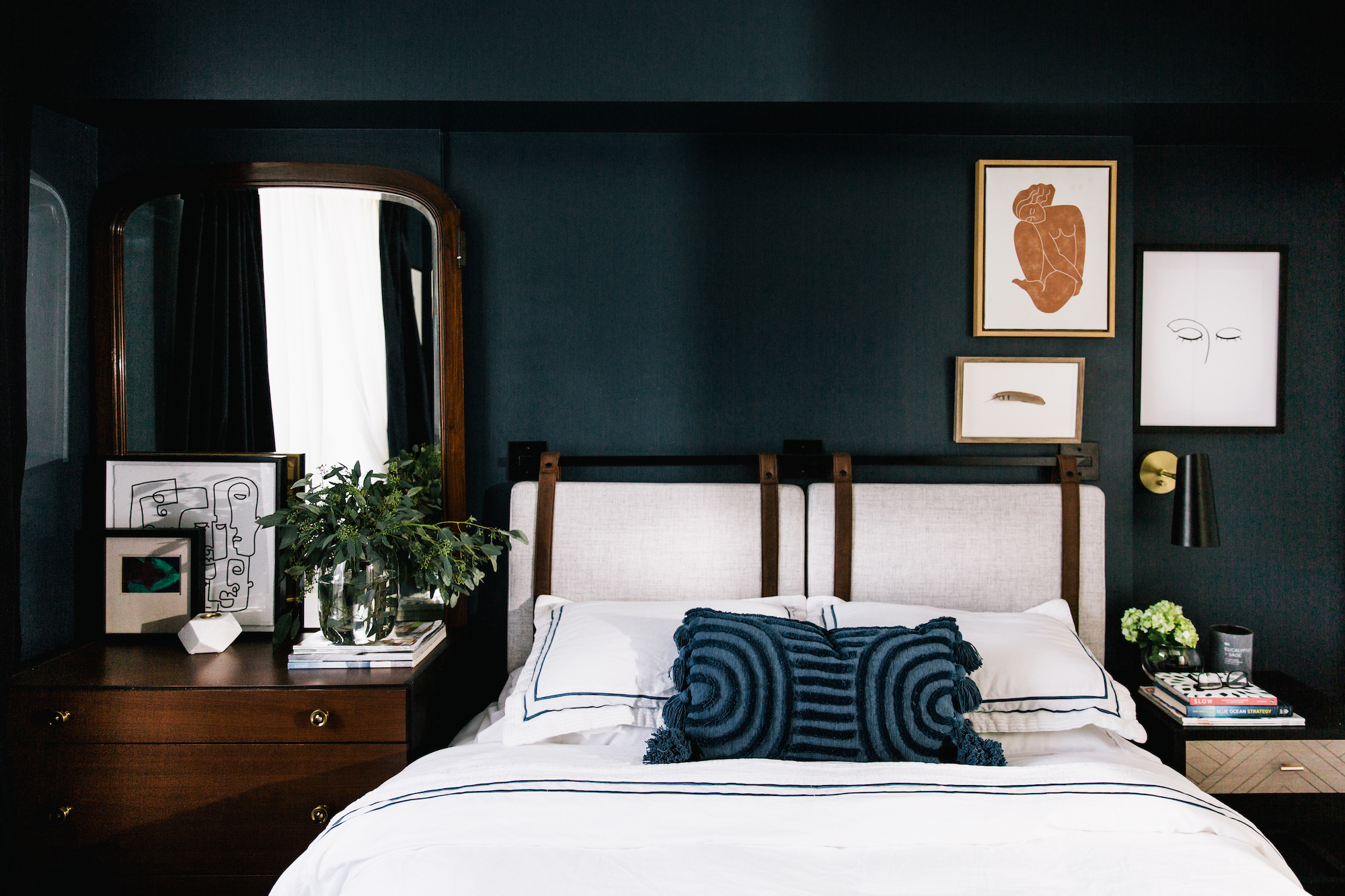