The fascinating history behind Longines, this season’s most coveted watch brand

The fascinating history behind Longines, this season’s most coveted watch brand

Their new Spirit collection pays tribute to the historic pioneers, including Amelia Earhart and Howard Hughes, who placed their trust in Longines timepieces

Any Toronto watch collector worth their salt should own at least one vintage chronograph from Longines, the longstanding Swiss brand recognizable by its famous winged hourglass, as well as big-name ambassadors like Kate Winslet and Simon Baker. The company is a true pioneer in the timepiece industry, with roots tracing all the way back to 1832 in Saint-Imier, Switzerland. With the launch of their new Spirit collection this year, a series of instant classics that bring the rich heritage of their trail-blazing background to life, we thought we’d share a few of the more interesting stories from their history.

In 1878, the company developed its first instrument for timing sporting events, a stopwatch-style pocket watch. They started timing high-profile horse races in the United States, a tradition that continues to this day, and eventually became the official timekeeper for a wide range of sporting events, including Formula One. Their commitment to constant innovation attracted the most prominent aviators and adventure-seekers of the time, and, over the past two centuries, the brand has equipped a host of adventurers with precision-tool watches as they conquered land, air and sea. In fact, heroic aviatrix Amelia Earhart wore a Longines single-button chronograph with two auxiliary dials during her Atlantic crossing in 1928, when she was the first woman to fly over the ocean as a co-pilot. The journey from Newfoundland to Wales lasted 20 hours and was plagued by harsh weather. However, Amelia was determined to do it again—this time, alone—and in 1932, she chose Longines again when she became the first woman to fly solo non-stop across the Atlantic. Throughout the nearly 15-hour trip she again battled fierce winds, icy conditions and mechanical issues, but her fearless spirit and love of flying pulled her through. “After midnight, the moon set,” she wrote of the journey, “and I was alone with the stars.”

Legendary multi-hyphenate Howard Hughes, who was an American business tycoon, investor, film director, engineer and philanthropist, also relied on Longines when he decided to make his record-breaking venture into the aviation world. In the 1930s, he founded his own aircraft-building company, and went on to set numerous airspeed records, including a transcontinental record in 1937 when he flew non-stop from LA to Newark in seven-and-a-half hours. His most major record-breaking feat, though, was a year later, when he became the fastest person to circumnavigate the globe, taking only three days, nineteen hours and 14 minutes in his Lockheed Super Electra. The Lockheed was exclusively equipped with state-of-the-art chronometers and chronographs by Longines, which were specifically invented in 1936 for navigation in fast-moving aircrafts.

Longines’ connection to speed extended to other high-stakes sports, too. Several decades later, the long-haired downhill ski racer Steve McKinney used a Longines watch to accurately clock his record-breaking 1978 race in the Chilean Andes, when he was the first person to break the 124-mph barrier. An outsider in the ski world, he made his first impression only a few years earlier, in 1974, when he showed up to a race in Italy, asked to borrow a fellow racer’s skis and proceeded to break the world speed record at the time. He credited his success to yoga and meditation, famously writing, “I discovered the middle path of stillness within speed, calmness within fear, and held it longer and quieter than ever before.” 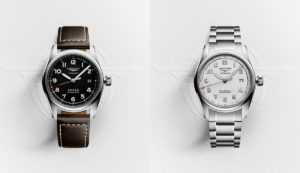 Though the company perfected their skills by developing ultra-accurate, professional instruments, they also brought their robust technical experience to the world of wristwatches, manufacturing the first chronograph wristwatch in 1913 and launching one of the world’s first quartz wristwatches in 1969. Like the adventurers who trusted their lives to Longines, the company has a drive and determination to never settle, and they continue to be at the forefront of the latest innovations in the industry. The Spirit collection perfectly encapsulates the company’s devotion to tradition, linking their rich history with top-of-the-line technology. “Watchmaking is one of the only industries that’s always looking back on its history to go further,” says current CEO Matthias Breschan. “Continuing to live in tradition is what keeps it alive.”