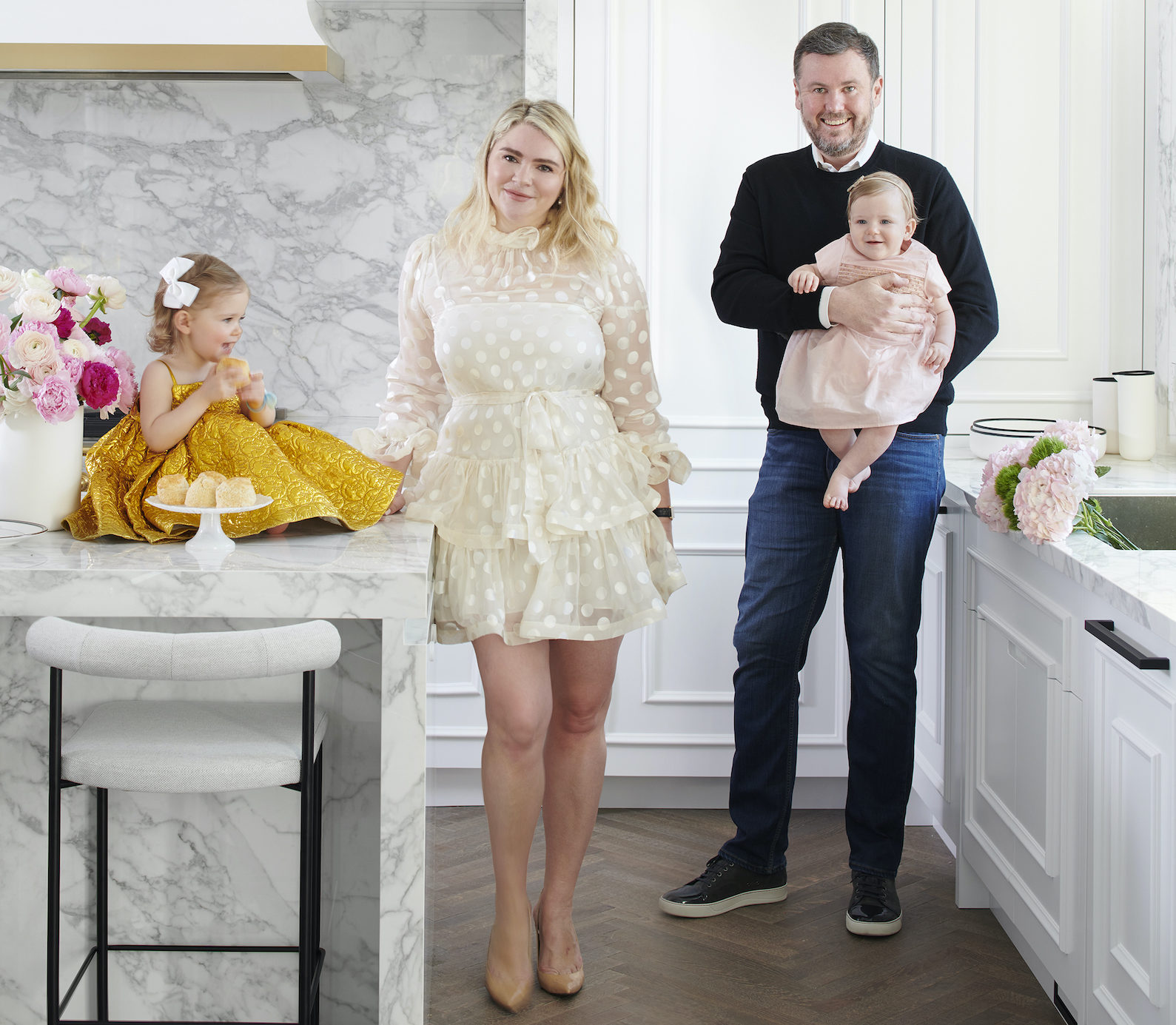 The place: A 4,000-square-foot mid-century house in Rosedale

Transplanted Torontonians Dan and Laura lived and worked abroad for about a decade—zipping between France, Singapore, Germany, New York City and London—before returning to Canada in 2016 to start a family. Back in Toronto, Dan and Laura once again bounced around, this time from a condo at the Four Seasons to an apartment in nearby Museum House to a Muskoka cottage they purchased in 2017. Soon after their move north, they had their daughters, Chloe and Eloise, in quick succession and started hunting for a proper permanent home in the city where they could put down roots.

In the summer of 2019, Dan and Laura saw a 3,000-square-foot pink-brick pile with a mansard roof on a leafy street in Rosedale. They loved the grand foyer, airy great room with 14-foot ceilings and large windows that happily recalled France’s grand country escapes. “The swimming pool sat adjacent to the house,” says Laura. “You could open the doors at the end of the great room and jump right in.”

Still, the place lacked a certain je ne sais quoi, plus they wanted to increase the basement’s ceiling height to make the space functional and add more square footage. They bought the house in September of 2019 and hired interior designer Ali Budd to take on a gut reno and incorporate modern, tech-enabled elements without compromising the home’s heritage charm.

Dan and Laura wanted a French-inspired interior that felt chic and special. Laura in particular favoured pink (an ode to her daughters), vivid wallpaper and statement lighting. Their references included the lavish Château de Bouelles in Normandy, which Dan and several friends had rented for Laura’s 30th birthday. They were also keen to weave in elements of  architect India Mahdavi’s designs for Sketch restaurant with its famous pink dining room, doodles on the walls and ribbed bucket seats.

While the Fetters hunkered down in Muskoka, Budd—with the help of Greg Cole of Cole Contracting—transformed the home. The team added 1,000 square feet to the space by partially digging out the basement to fit in a rec room. They layered in a crisp black-and-white palette, custom furnishings, eclectic patterns and pastels. They also capped off the great room’s ceiling at 11 feet to shoehorn in a second-storey addition, which features the new primary bedroom, ensuite bathroom and his-and-hers closets.

The project took about a year, and the Fetters moved in December of 2020. The security system, cameras, TVs, speakers, lighting, drapery and heated floors are now all automated and operate through voice control or an app on the couple’s phones. Dan and Laura are thrilled with the redesign, and especially their new kitchen. It’s a perfect spot to whip up their favourites: Sunday roasts (a tradition they continued from their London days) and cheese fondue, a callback to their ski adventures in Switzerland and France. Alternatively, they’ll prep a dish from their beloved Yotam Ottolenghi cookbook. 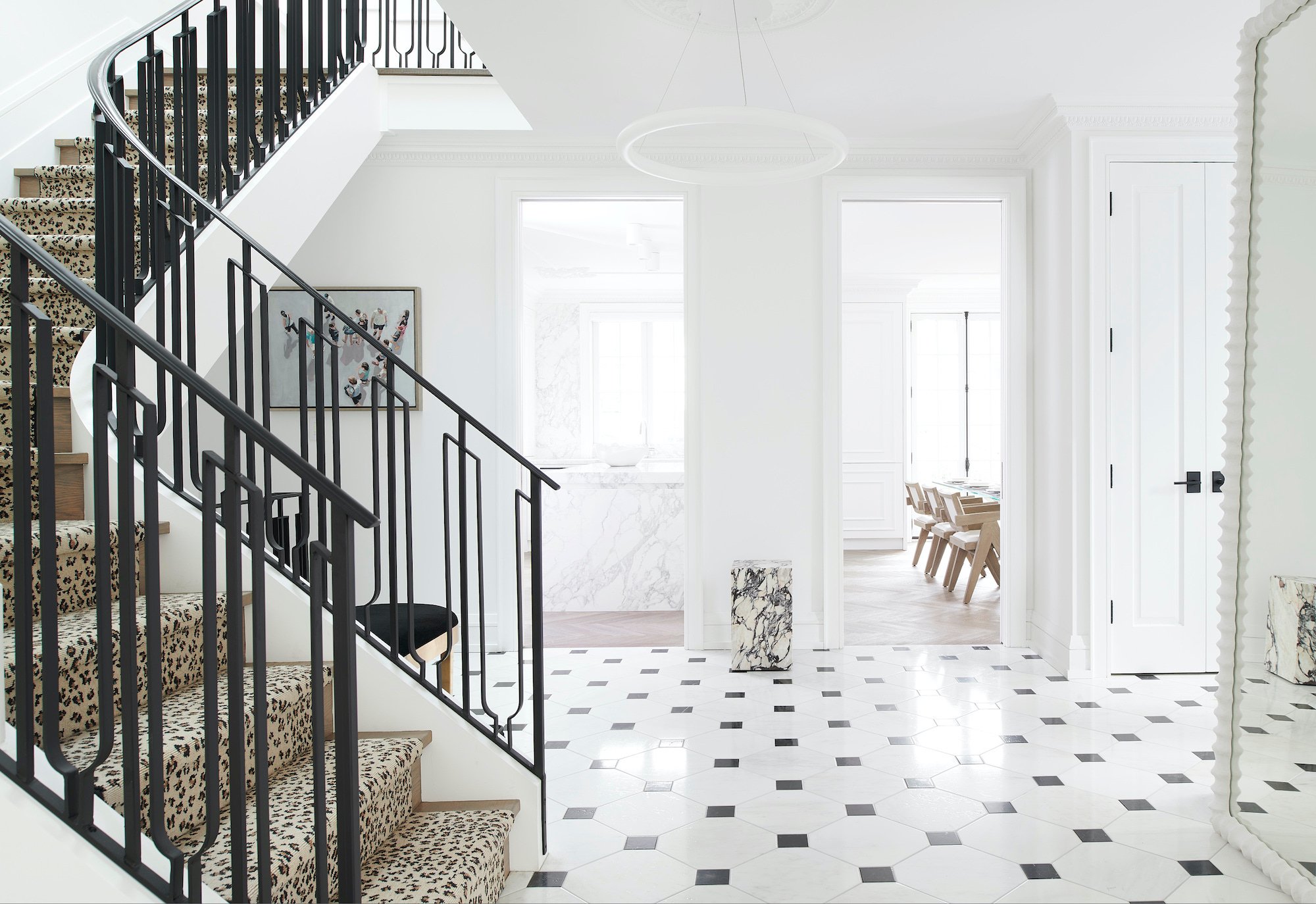 The dining chairs are from Restoration Hardware and the 10-pendant brass Trapeze chandelier is by Apparatus: 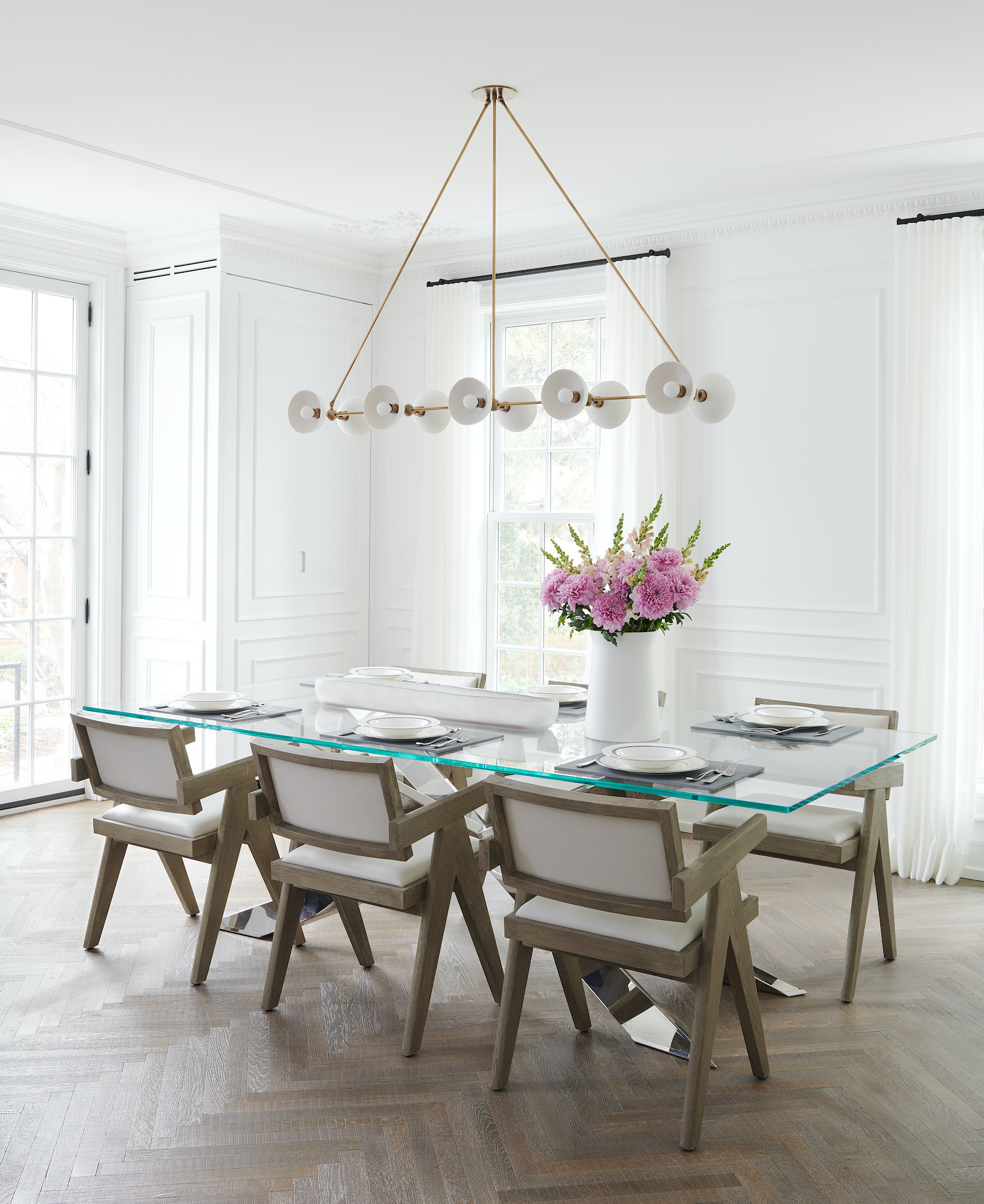 The kitchen has herringbone wood floors from Moncer, an abundance of Bianco Carrara marble, a gold-trimmed La Cornue range and generous mouldings. To keep everything looking seamless, the appliances are concealed—there’s a Sub-Zero refrigerator beside the sink: 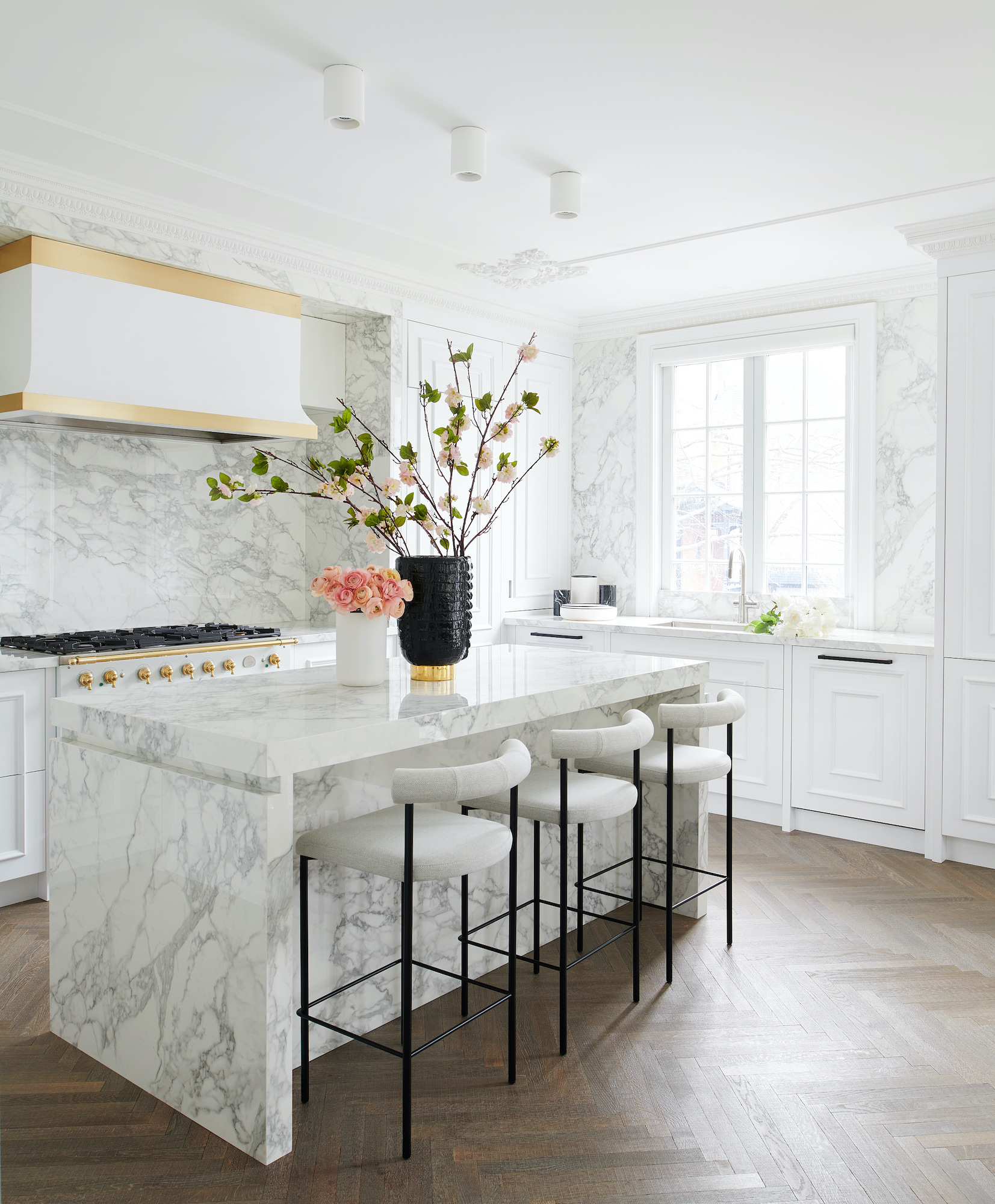 “The great room is so spread out—everyone can sit six-feet apart—our joke is that it’s a Covid-friendly entertaining area,” says Laura. The spacious arrangement and curved furniture (custom by Ali Budd Interiors) were designed so Chloe and Eloise have lots of room to manoeuvre. “There is open space for the children to play and the custom curved sofas are laid out in a way that’s conducive to small or large gatherings,” Budd says: 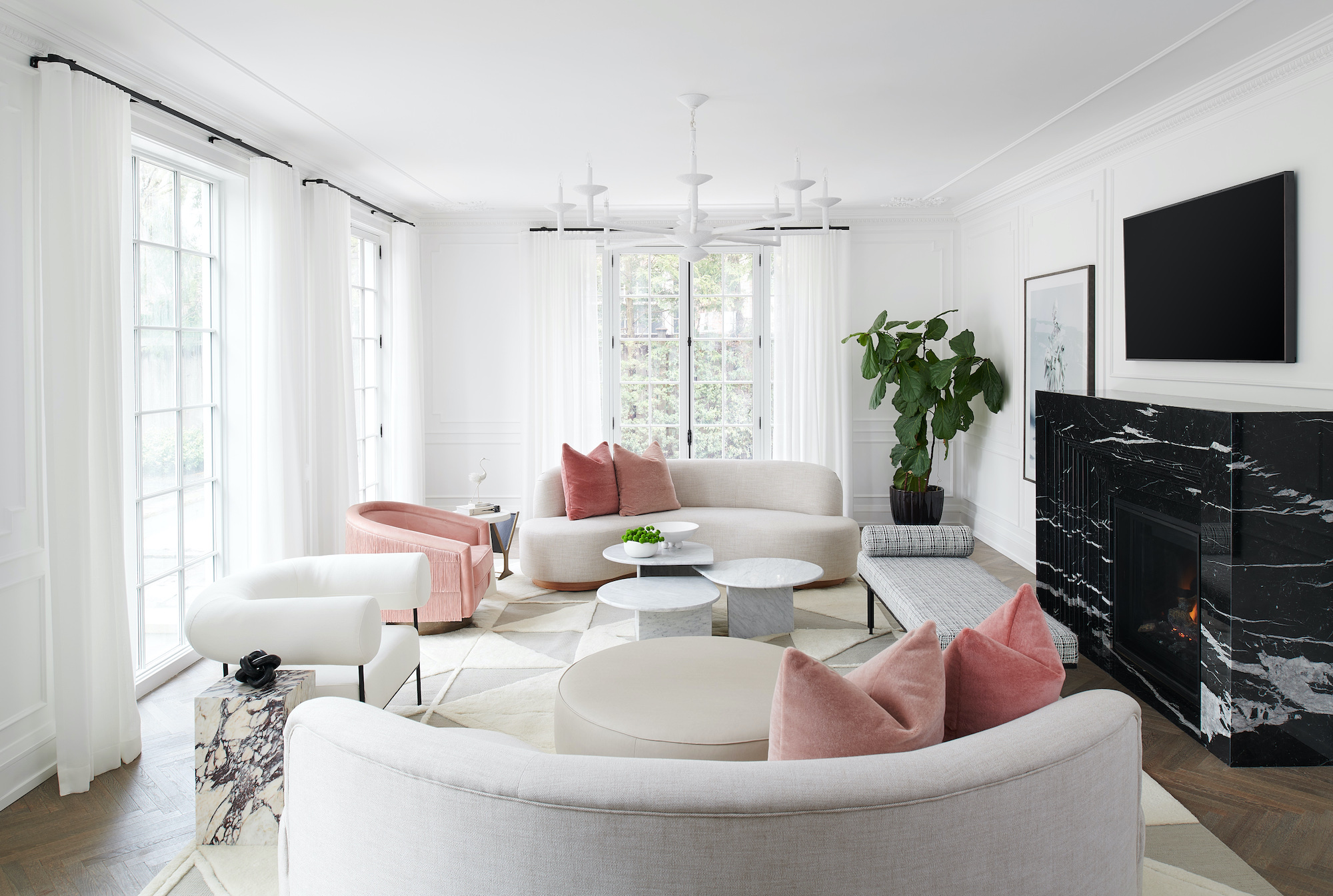 The dramatic black marble fireplace has a sculptural presence. The artwork beside it is by Toronto-based artist Erin Armstrong and the chandelier is Restoration Hardware: 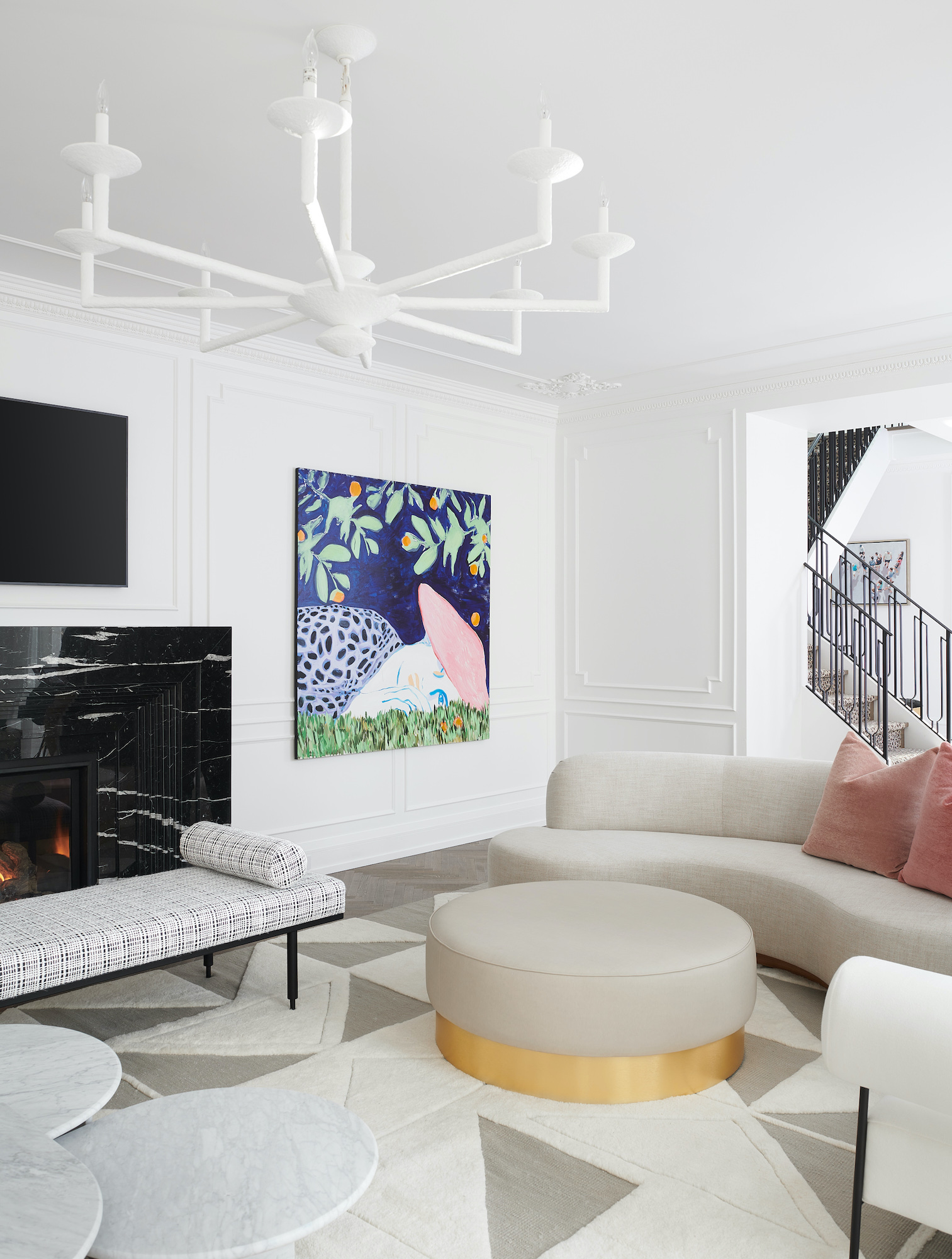 The powder room has gold accents and a Gucci heron wallpaper: 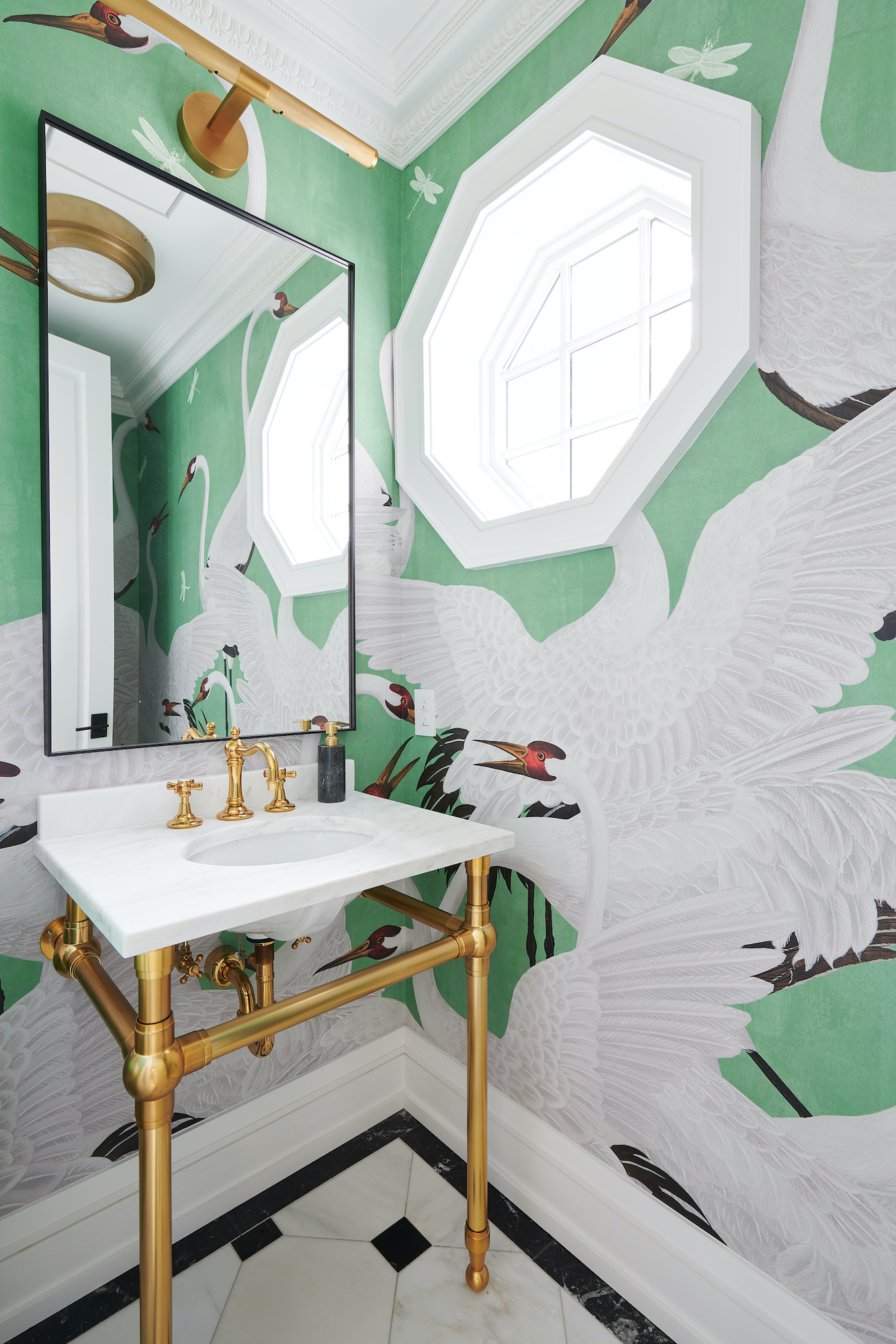 The media room features a pink sectional designed by Budd and made by Cooper Brothers, as well as a painting by Erin Armstrong: 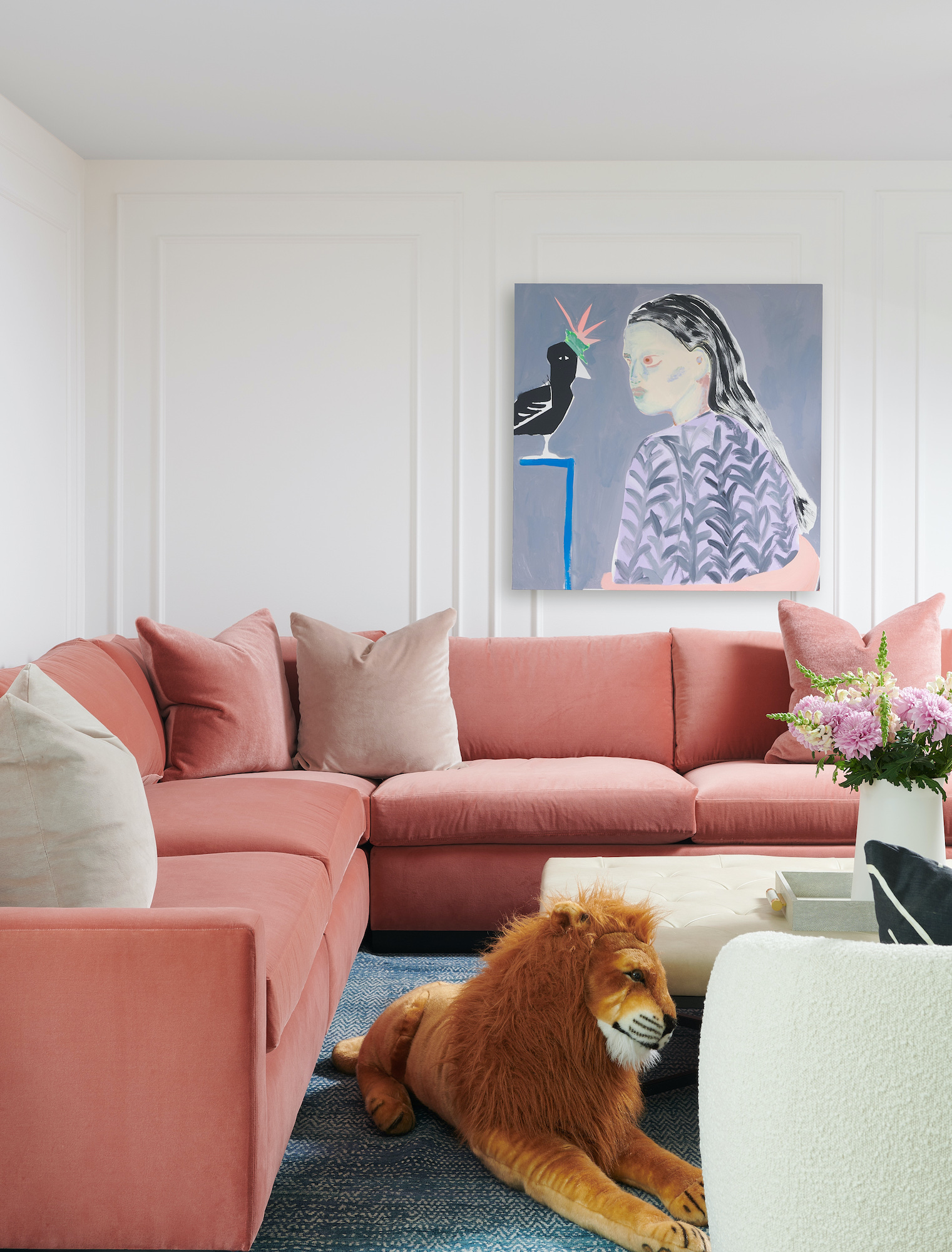 Upstairs, a life-size flamingo lords over Eloise’s room, which has Pierre Frey wallpaper and a feathery chandelier by Regina Andrew via ELTE: 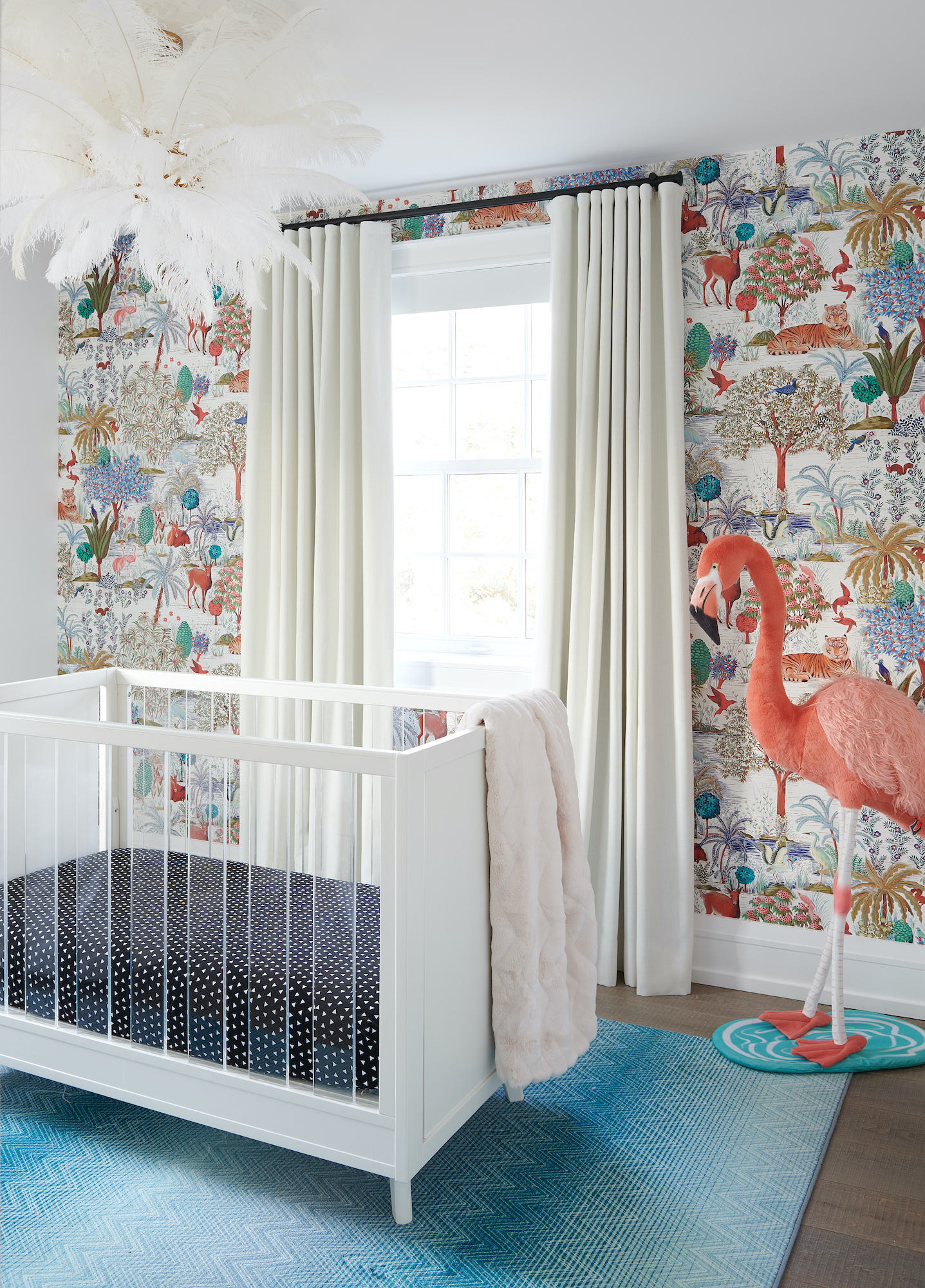 Chloe’s playful pink room sports wallpaper from NewWall, an Anthropologie bed and a chandelier from CB2: 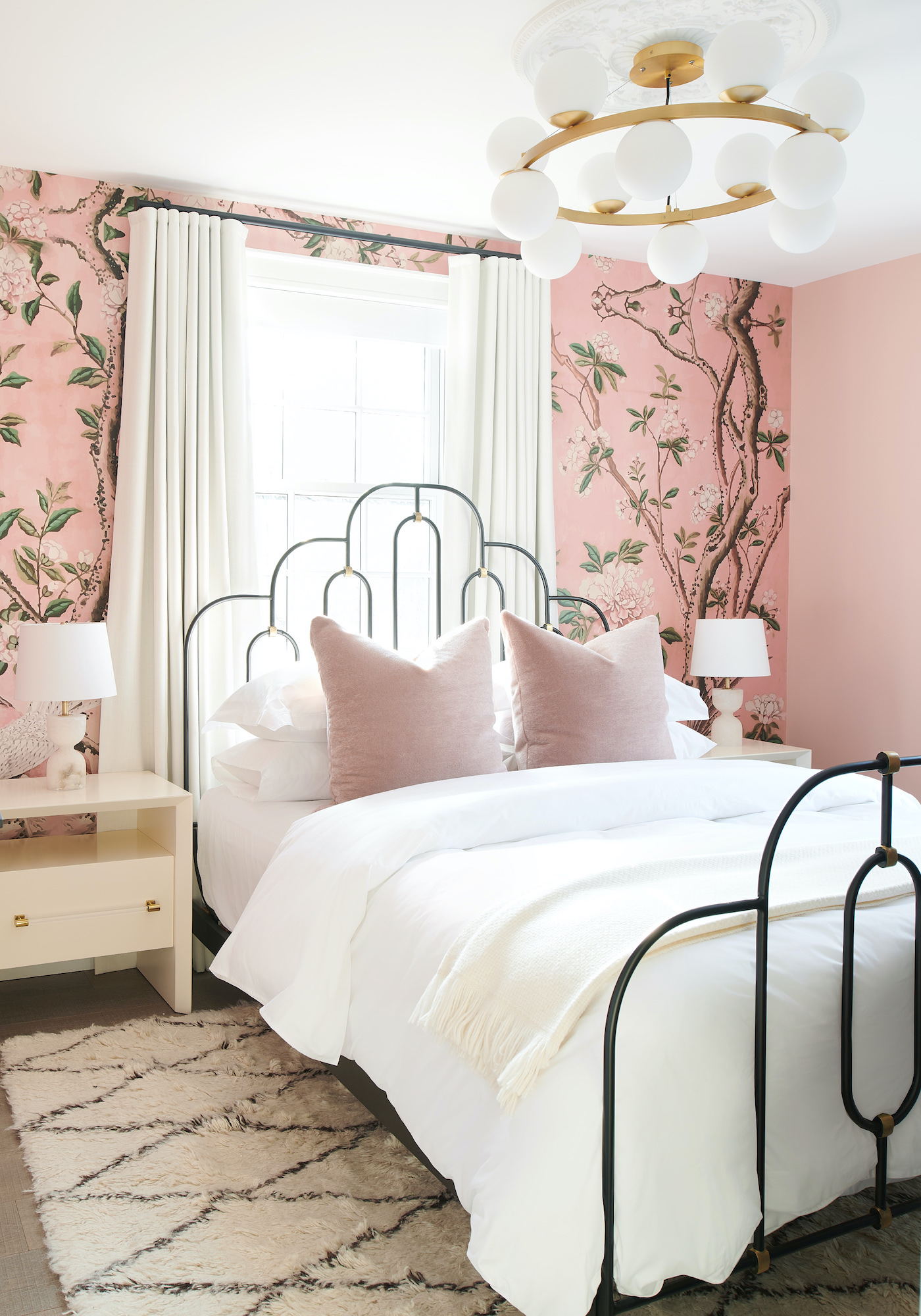 The girls’ bathroom has Pierre Frey wallpaper and scalloped blue tiles from Toronto’s Saltillo, as well as lighting by Horchow: 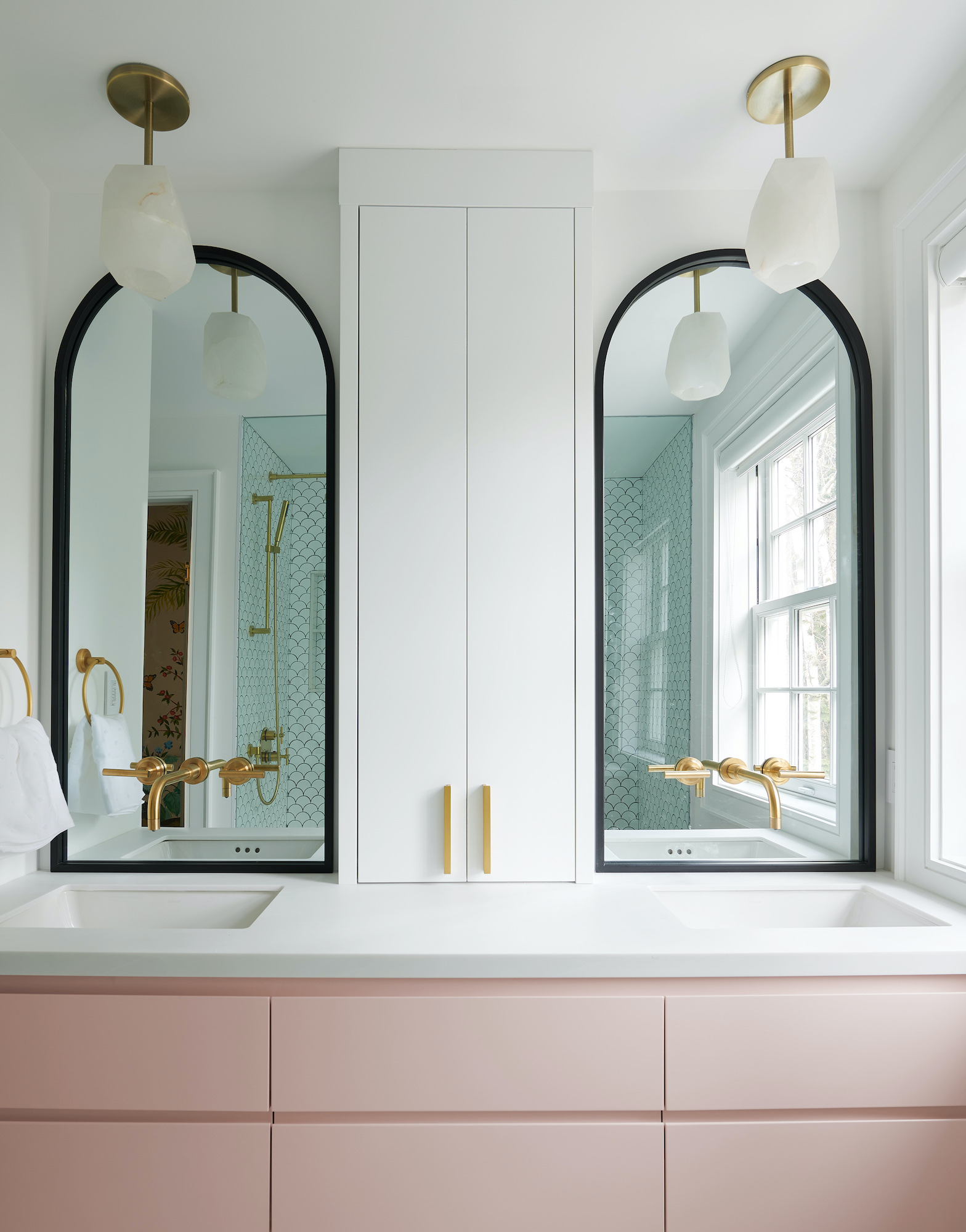 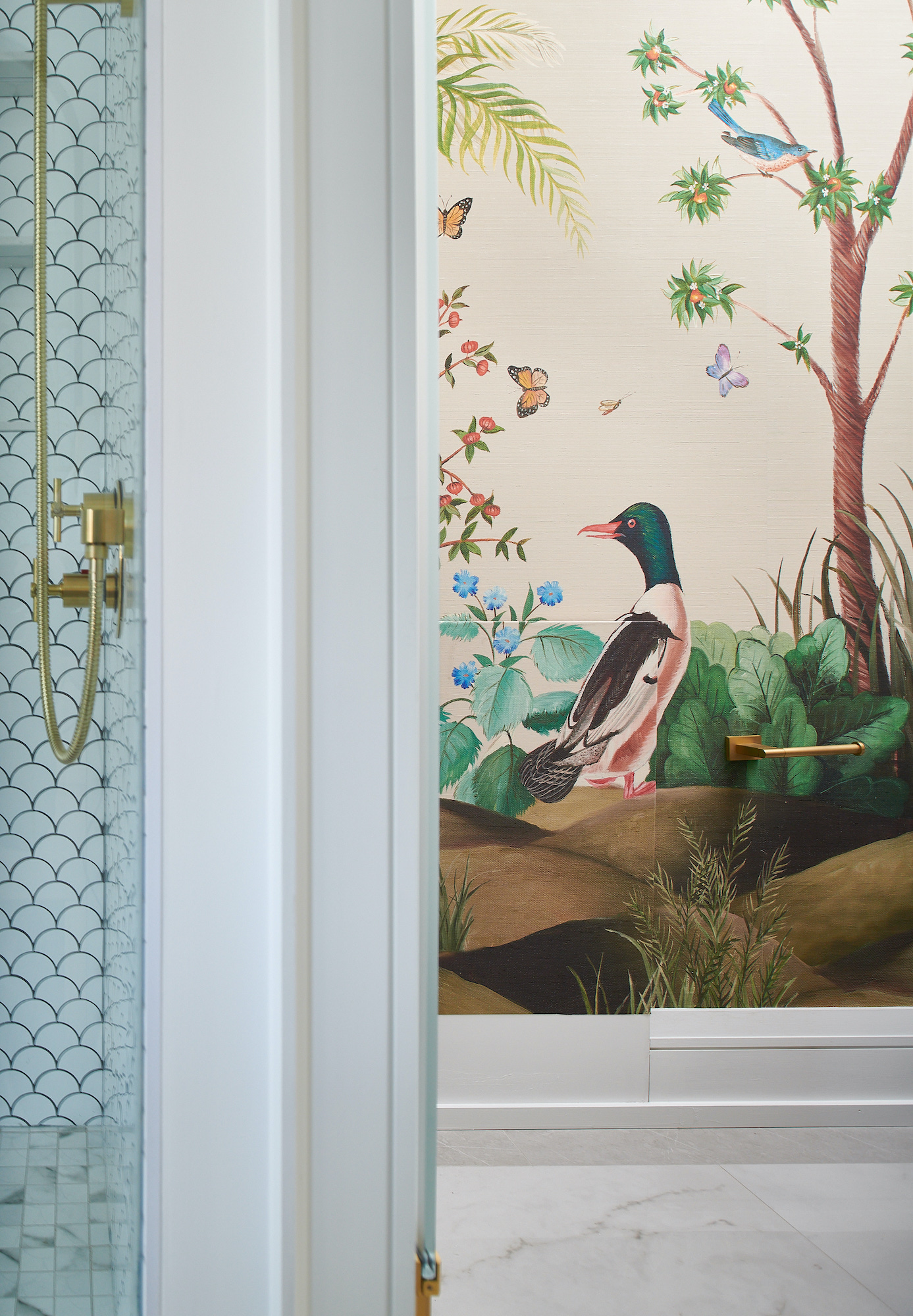 Dan and Laura are obsessed with their bedroom. “We’re transported to a hotel in Paris,” says Laura. “Every day, when we go to bed, we look up that Apparatus Cloud Light”: 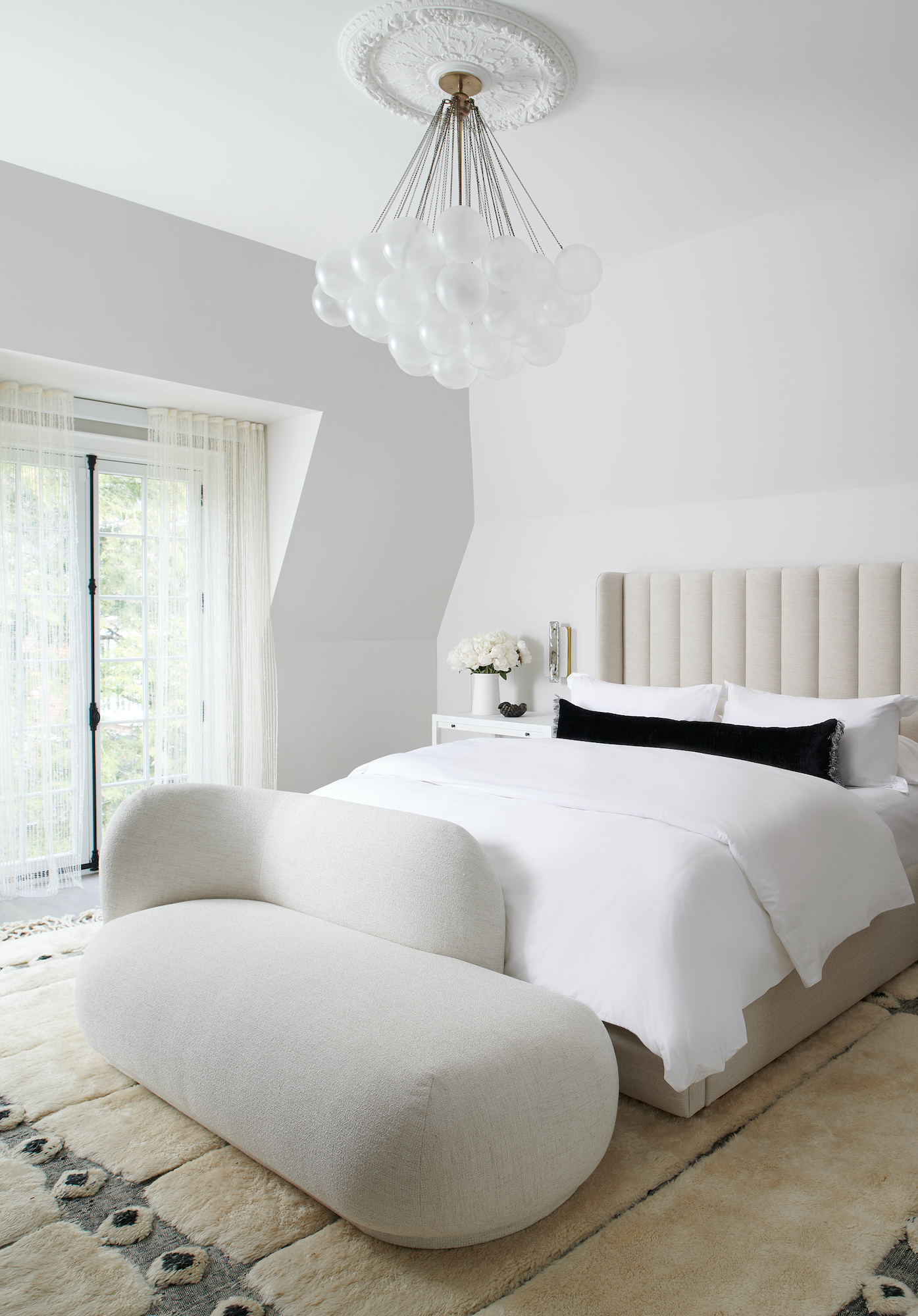 The reeded white oak dressers flanking the fireplace were made by Watchtower and designed by Budd: 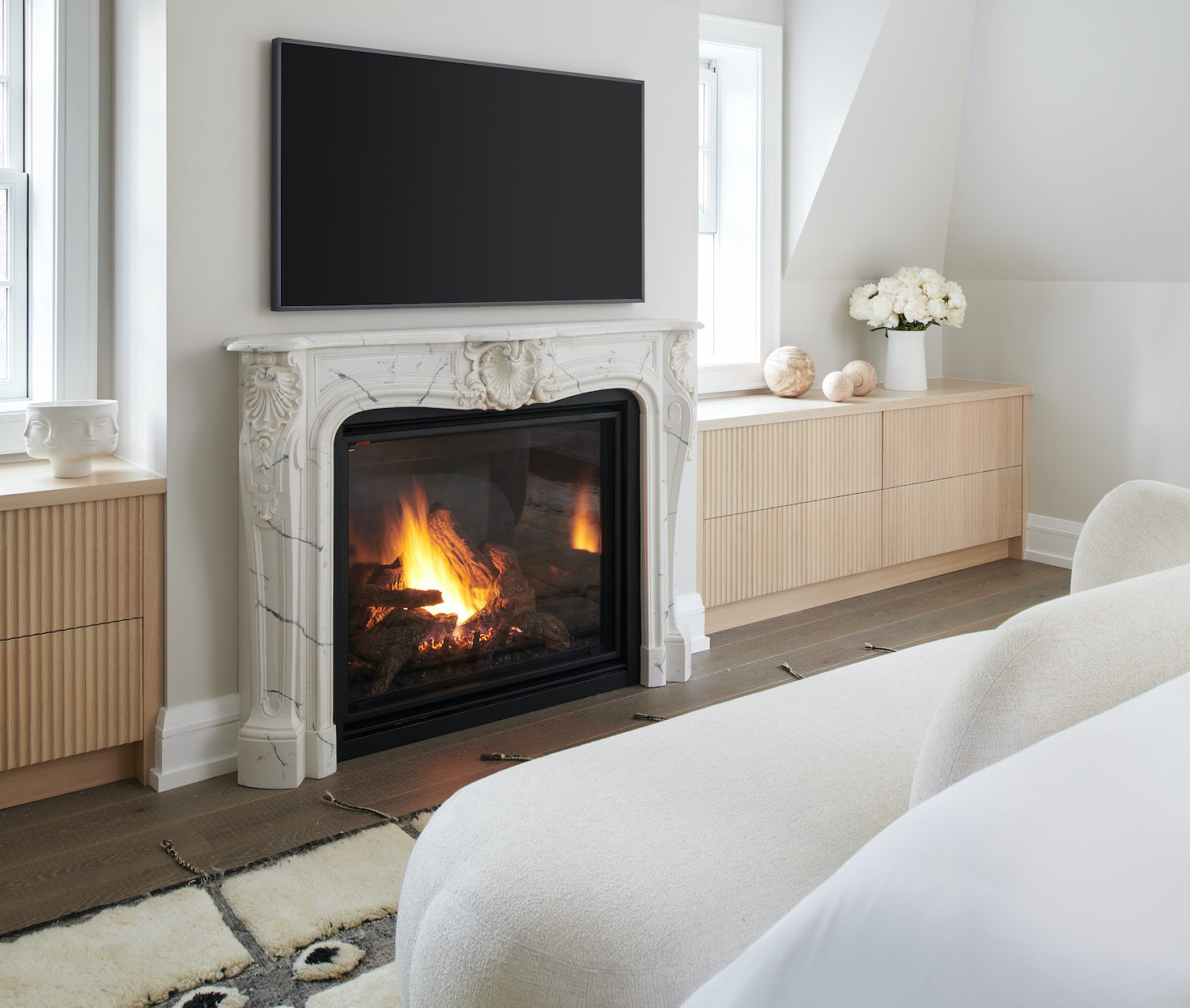 The principal ensuite has a luxurious brass Catchpole and Rye bathtub, marble walls and art by Erin Armstrong: 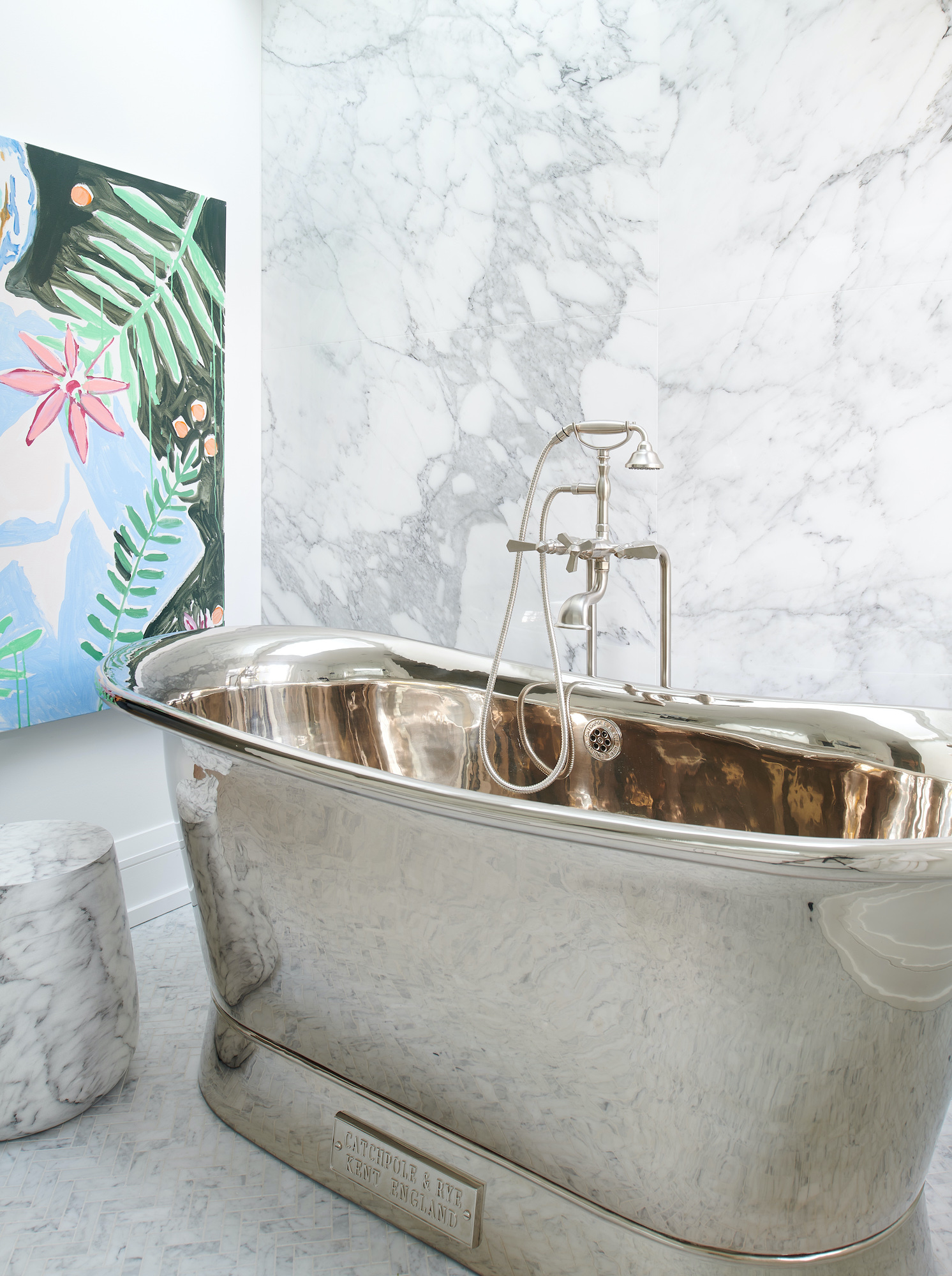