With the Toronto market scorching hot, this couple cashed out and moved to a $1.2-million chalet in Mont-Tremblant

With the Toronto market scorching hot, this couple cashed out and moved to a $1.2-million chalet in Mont-Tremblant 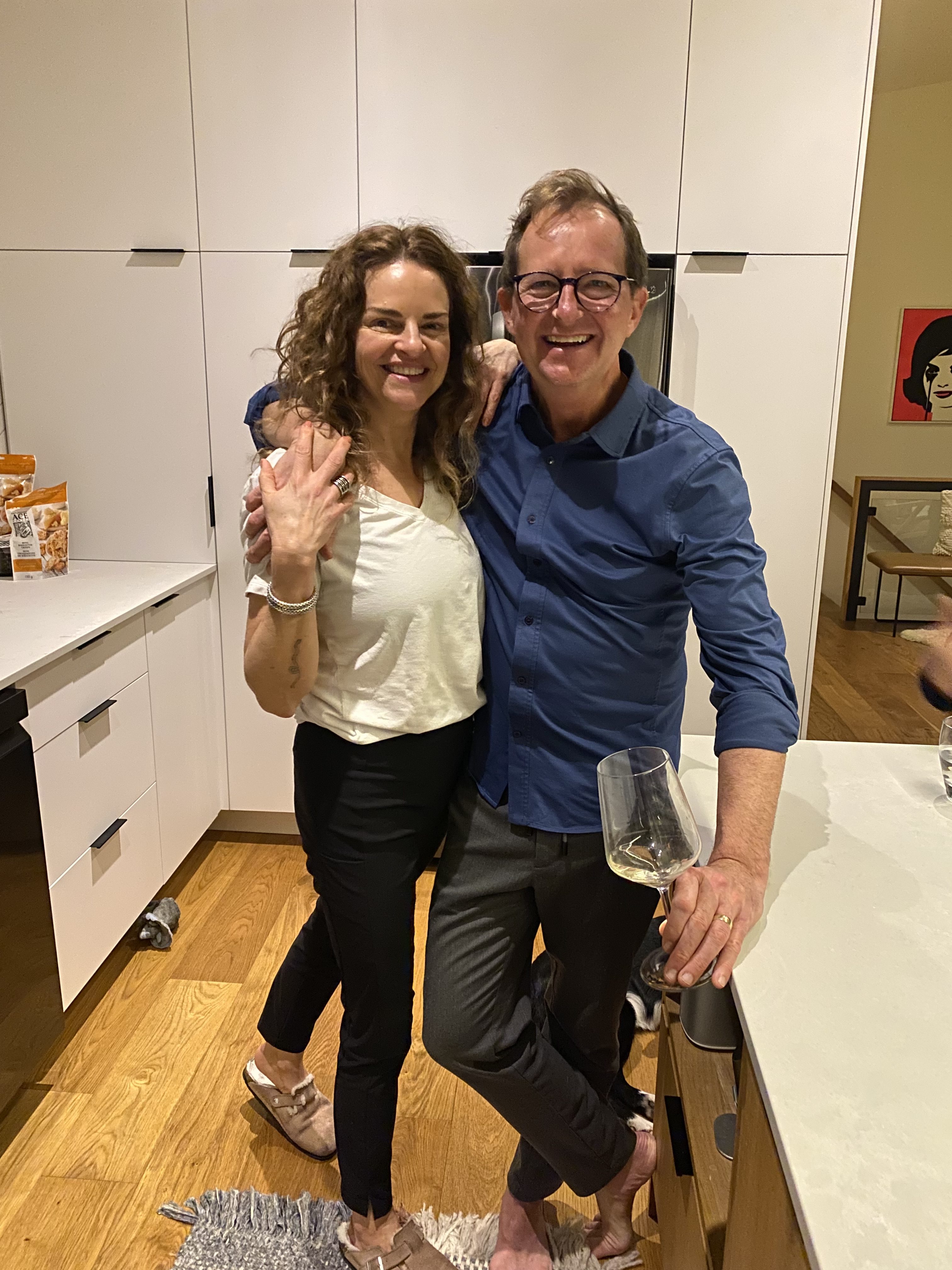 The history: In 2009, John and Cathy purchased a three-bed, two-and-a-half bath townhouse in downtown Oakville for $640,000.

At the time, their daughters, Savannah and Melody, were in middle school. The family would split time between their Oakville house and a 900-square-foot chalet in Beaver Valley, which they bought for $140,000 in 2005.

By 2019, the Thomsons felt that their chalet was getting small for their family, especially as Savannah and Melody wanted to bring partners and friends to stay over with them.

So they sold the chalet, in March of 2019, for $399,999, intending to buy a larger cottage in the near future. They planned to purchase that property in mid-2020, but then the pandemic hit and prices for cottages in Ontario skyrocketed.

By the summer of 2020, John realized that his work would become fully remote. Cathy’s work had also gone virtual, hosting client sessions online.

Plus, with their daughters now out of high school and pursuing studies and work outside of Oakville, they were no longer tied to the city.

The family realized they could sell their townhouse and permanently relocate to a large vacation property, where they could host their daughters, friends and other family.

They were initially thinking of purchasing in Nova Scotia, and almost made an offer on a vacation home there. But Cathy and John pulled out at the last minute because they figured it was too far for their daughters to visit regularly.

The hunt: In the summer of 2021, John and Cathy rented a farmhouse in Mont-Tremblant for a month, for a working vacation. They fell in love with the area and enjoyed the natural scenery, as well as the restaurants and shops in nearby villages.

Plus, the real estate market there wasn’t as competitive as in Ontario, allowing them to afford a nicer property.

By their second week at the farmhouse, they were convinced that Mont-Tremblant was an ideal location for their next home. The couple viewed five properties with a realtor before their month was up.

They set their budget at $2 million, based on what they thought they could get for their Oakville home.

In the first week of August, when John and Cathy had returned to Oakville, they submitted an offer on their top property.

It was a 3,800-square-foot new-build, with four bedrooms and three bathrooms on two acres of land. The home was located on a former ski run, at the edge of a small lake called Lac Bobby. 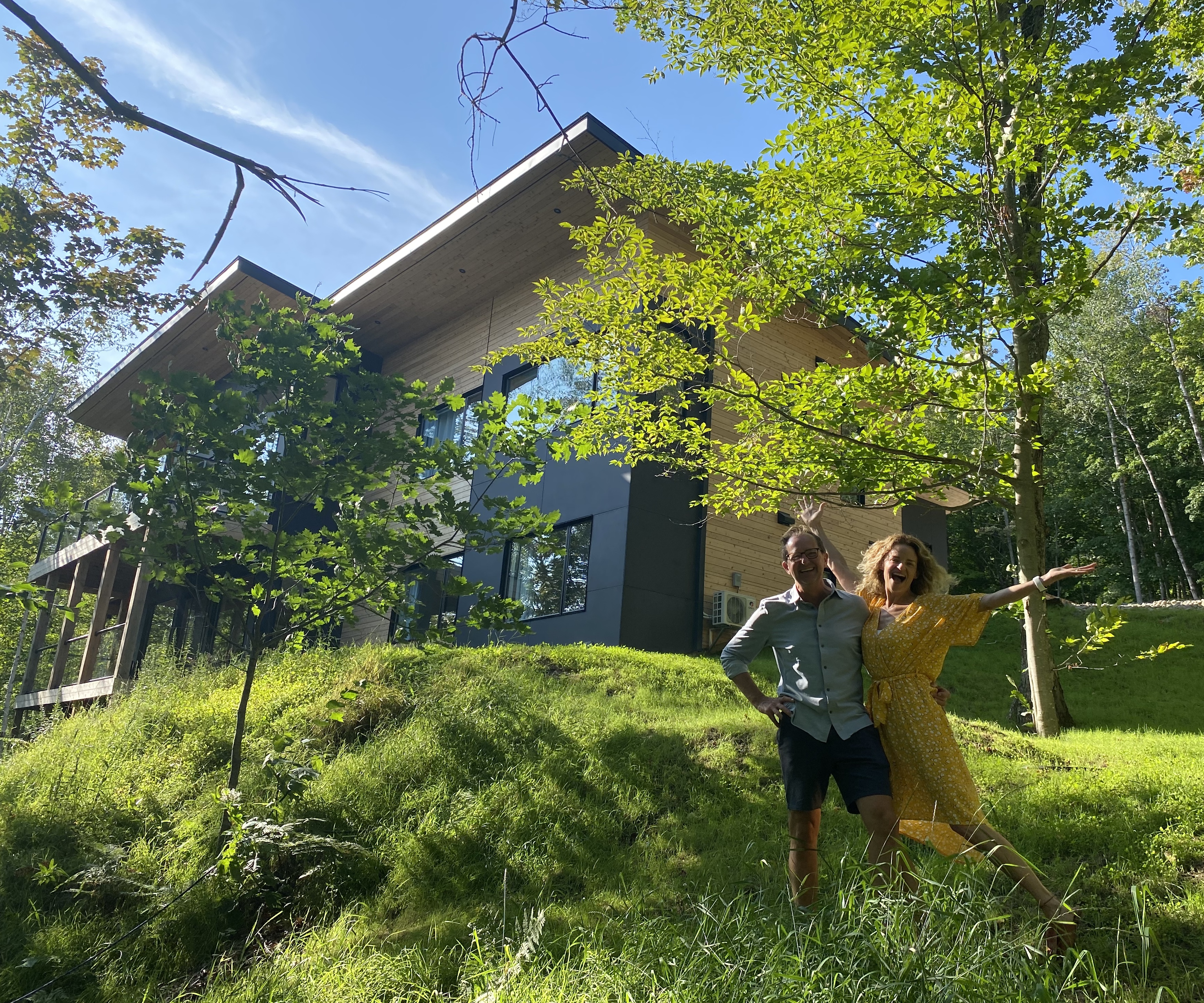 The home had a cedar exterior and was designed in a modern Scandinavian style. The front entrance led to a small foyer, a powder room, a mudroom and an open-concept living and dining room with access to a screened-in deck and a separate wrap-around balcony.

The main bedroom and second bedroom were also on the upper floor. On the lower level, there was a family room with two more bedrooms, a full bathroom, a storage room and another deck. The mudroom had access to an attached garage with room for two cars. 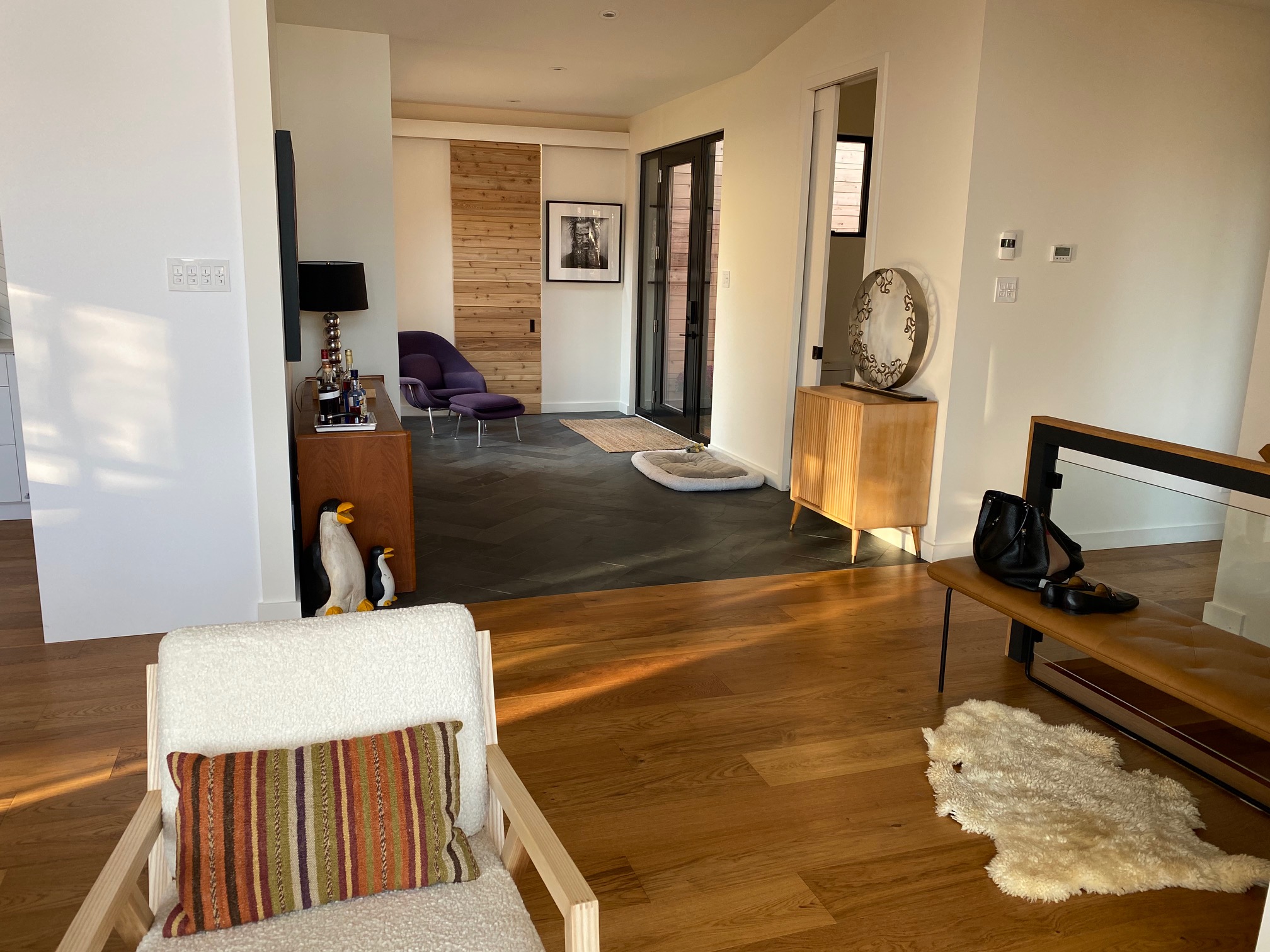 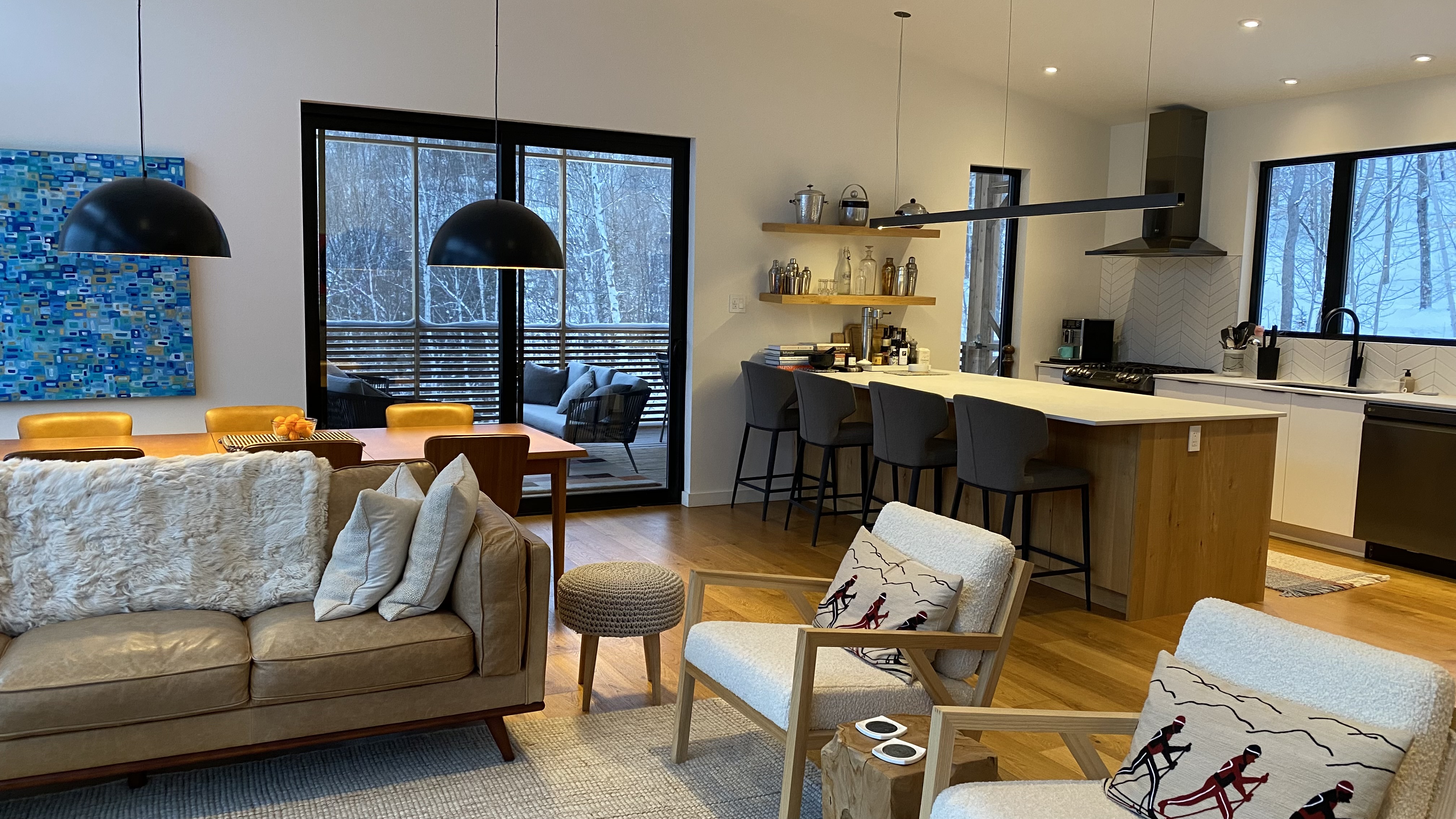 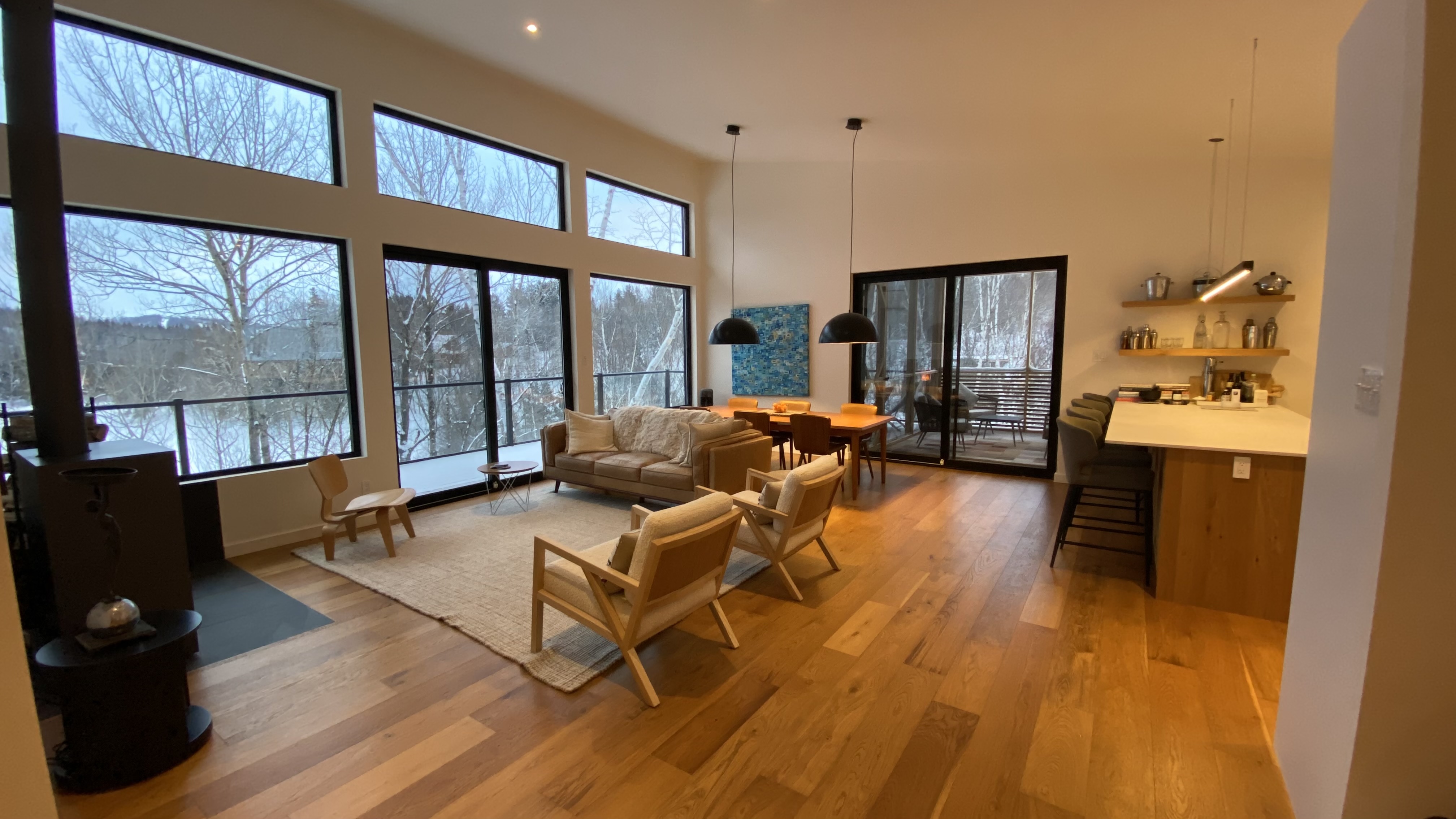 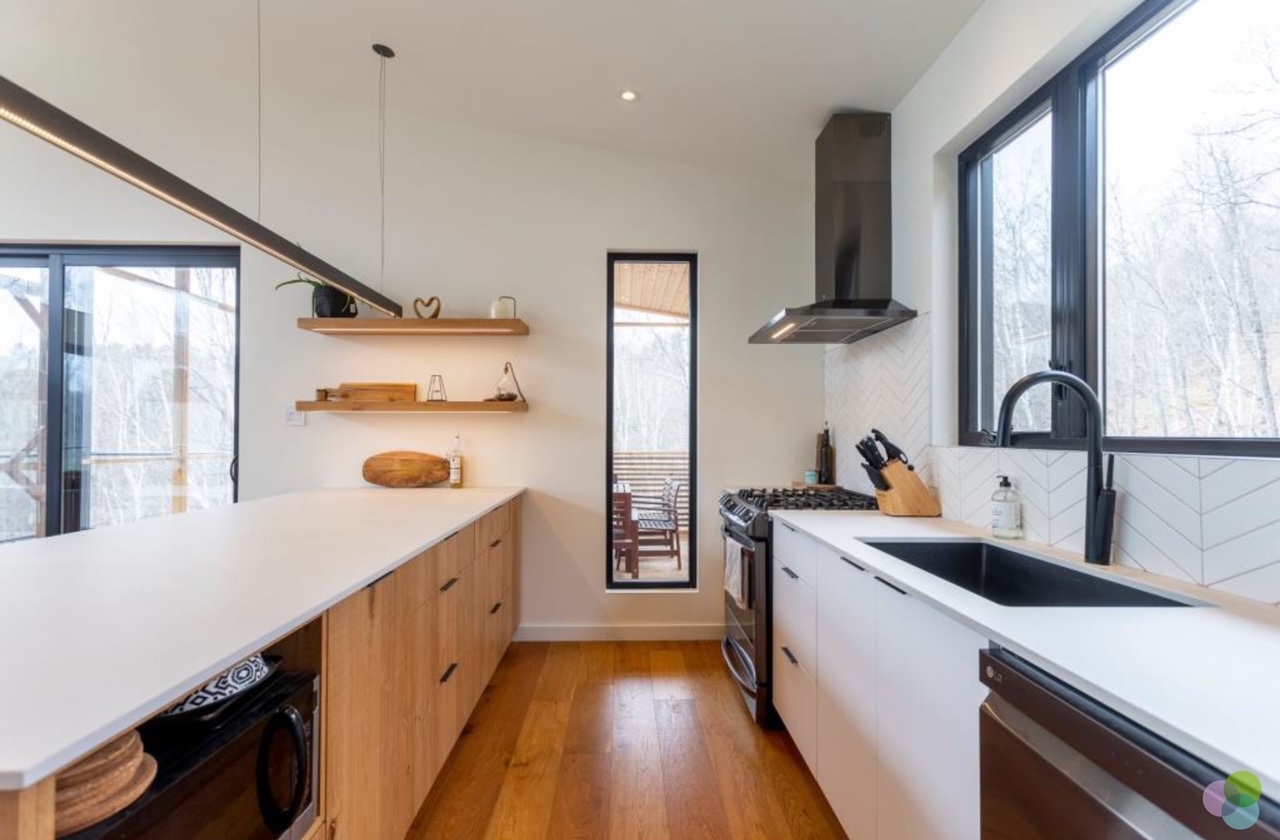 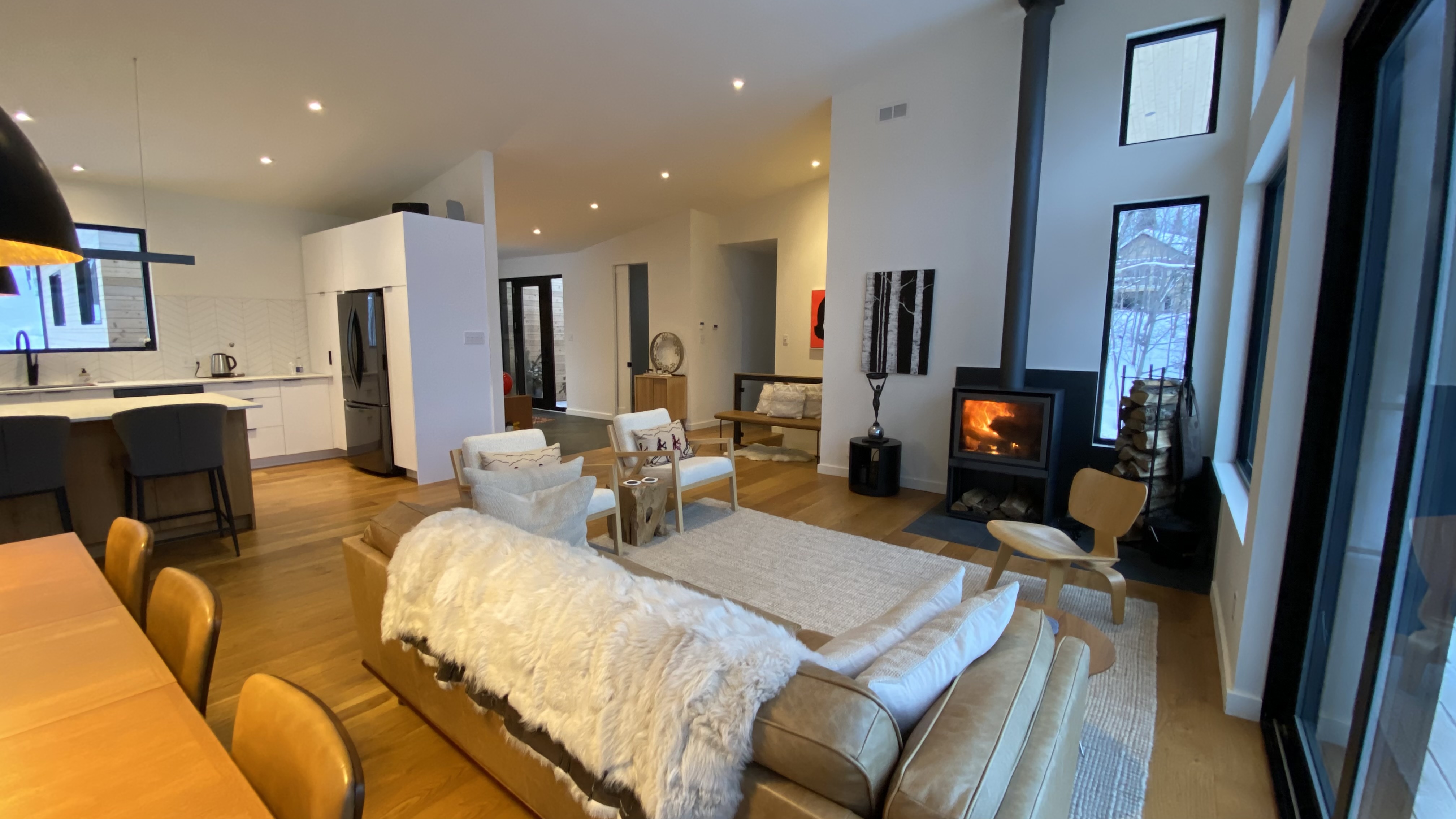 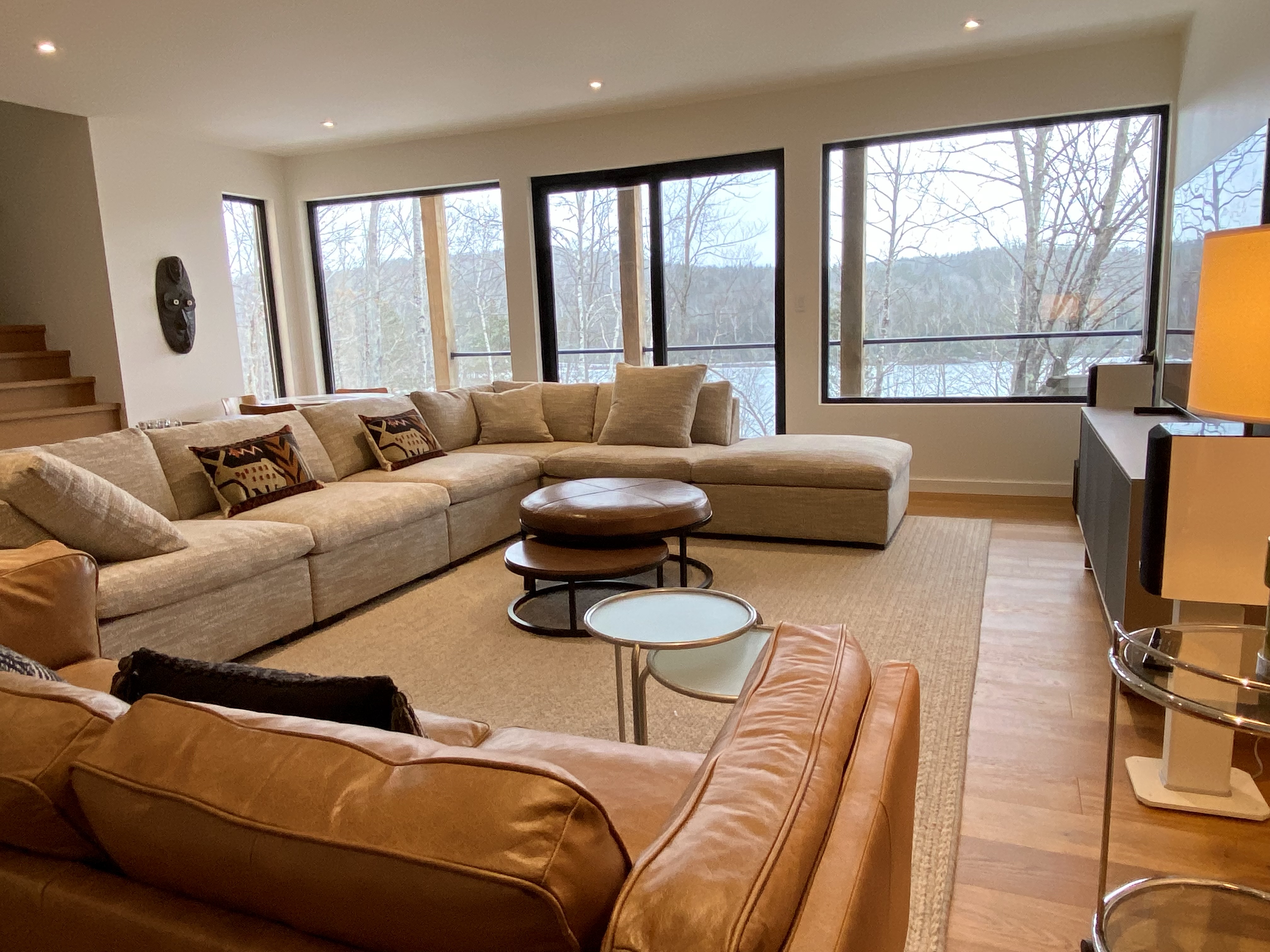 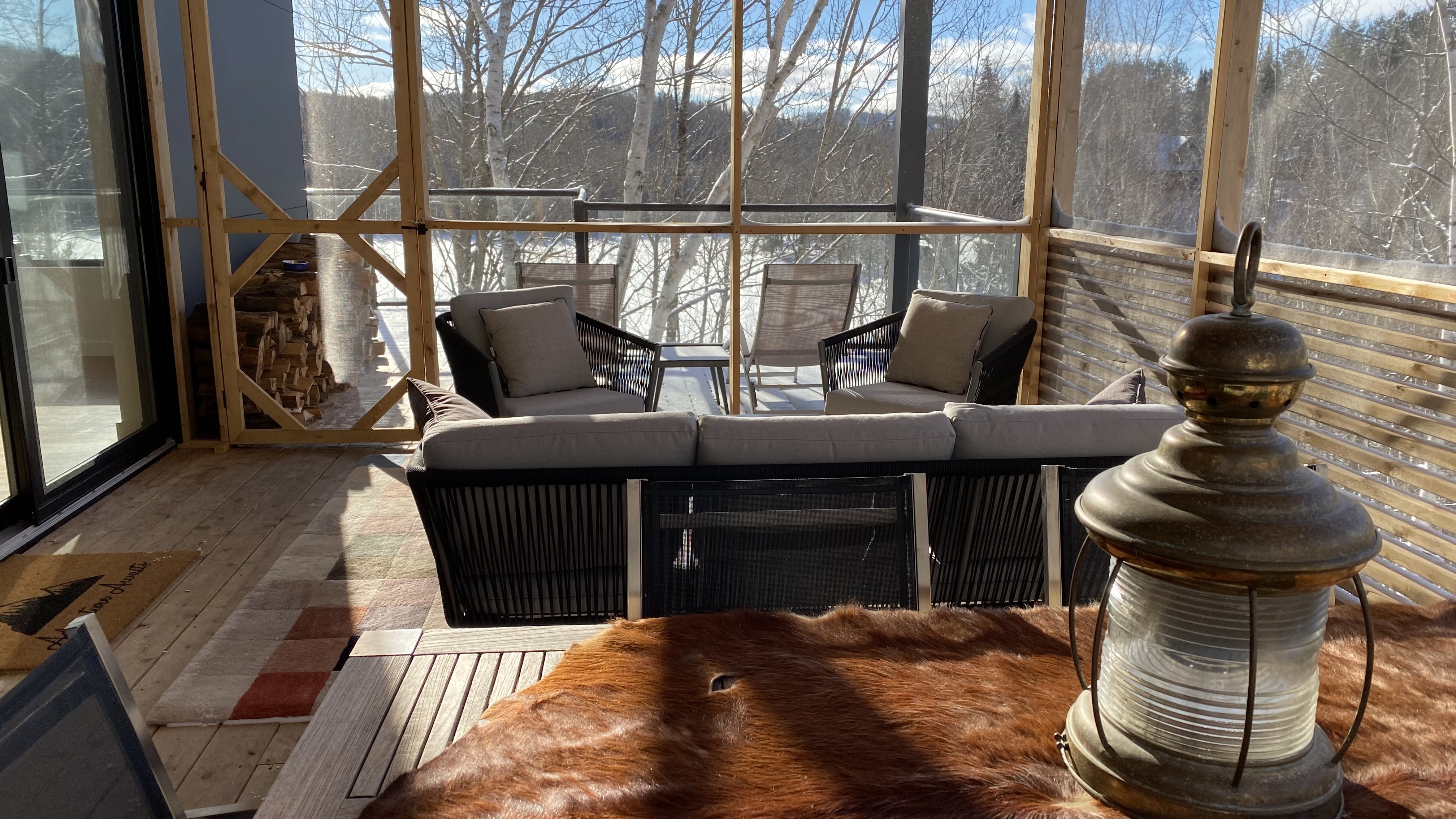 There was also a wood-burning sauna 30 feet from the place. Another bonus: the property was a five-minute drive to the Mont-Tremblant ski village, and three minutes from a Clublink golf course (Cathy is an avid golfer).

Shortly afterward, they put their Oakville townhouse on the market for $1,999,999. Within six hours of listing it, they received their first offer, of $2,000,000, which they accepted.

The outcome: John and Cathy moved into their Mont-Tremblant home on October 4. Since then, they’ve had 15 groups of guests stay with them. They love entertaining family and friends in their new house, which was something they couldn’t do as often at their Oakville and Beaver Valley properties. 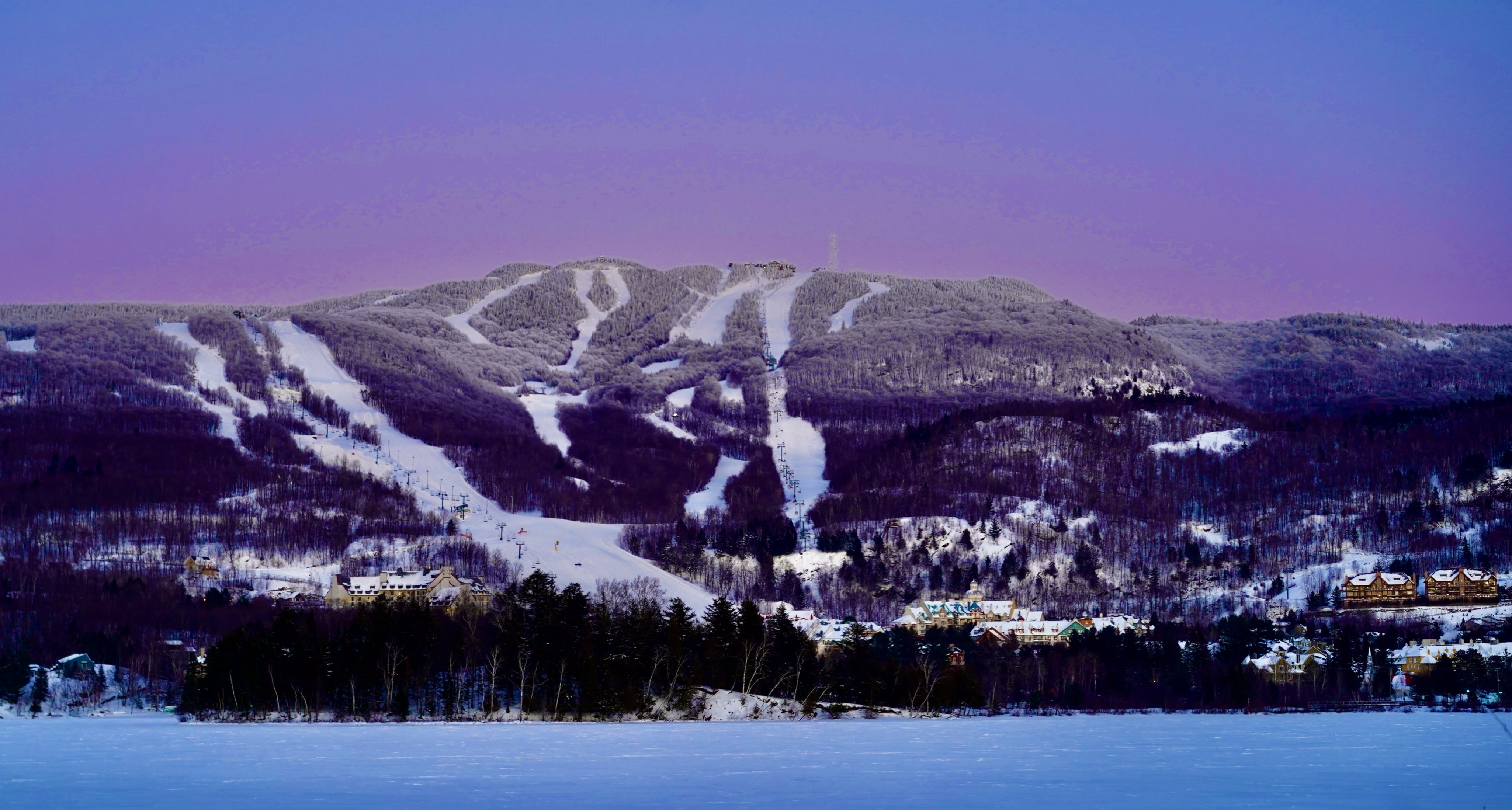 Savannah lives and works in Toronto, but visits John and Cathy about once a month.

After finishing chef school in Ireland, Melody moved in with John and Cathy this year, staying in a bedroom on the lower level. She found work as a chef at a restaurant in Tremblant Village, which is just a few minutes away.

John converted the second bedroom on the main level into his office, and Cathy is still taking on remote clients, but plans to start a business leading fitness retreats for women visiting Mont-Tremblant.

John and Cathy love their new surroundings. John skis at least three times a week, usually in the mornings. They’re a two-minute walk to a 1,500-acre wildlife preserve, where they go snowshoeing and take their dog, Wilson, for walks.

They miss their social network in Oakville, but John and Cathy are making new friends in Mont-Tremblant. Everyone is bilingual in the area, but Cathy spends 30 minutes a day studying French to better immerse herself in the community. They see themselves staying in the home into retirement.

Five months into moving in, Cathy and John still feel in disbelief about their new surroundings. “We kind of shake our heads, and we look at each other and we say, ‘Oh, my God, this is our house,” Cathy says. “It’s really nice.”