More than one third of Toronto’s condo units are owned by people who don’t live in them, according to new numbers from Statistics Canada. Who are all these condo investors and how much money are they making? We found a few and asked them. 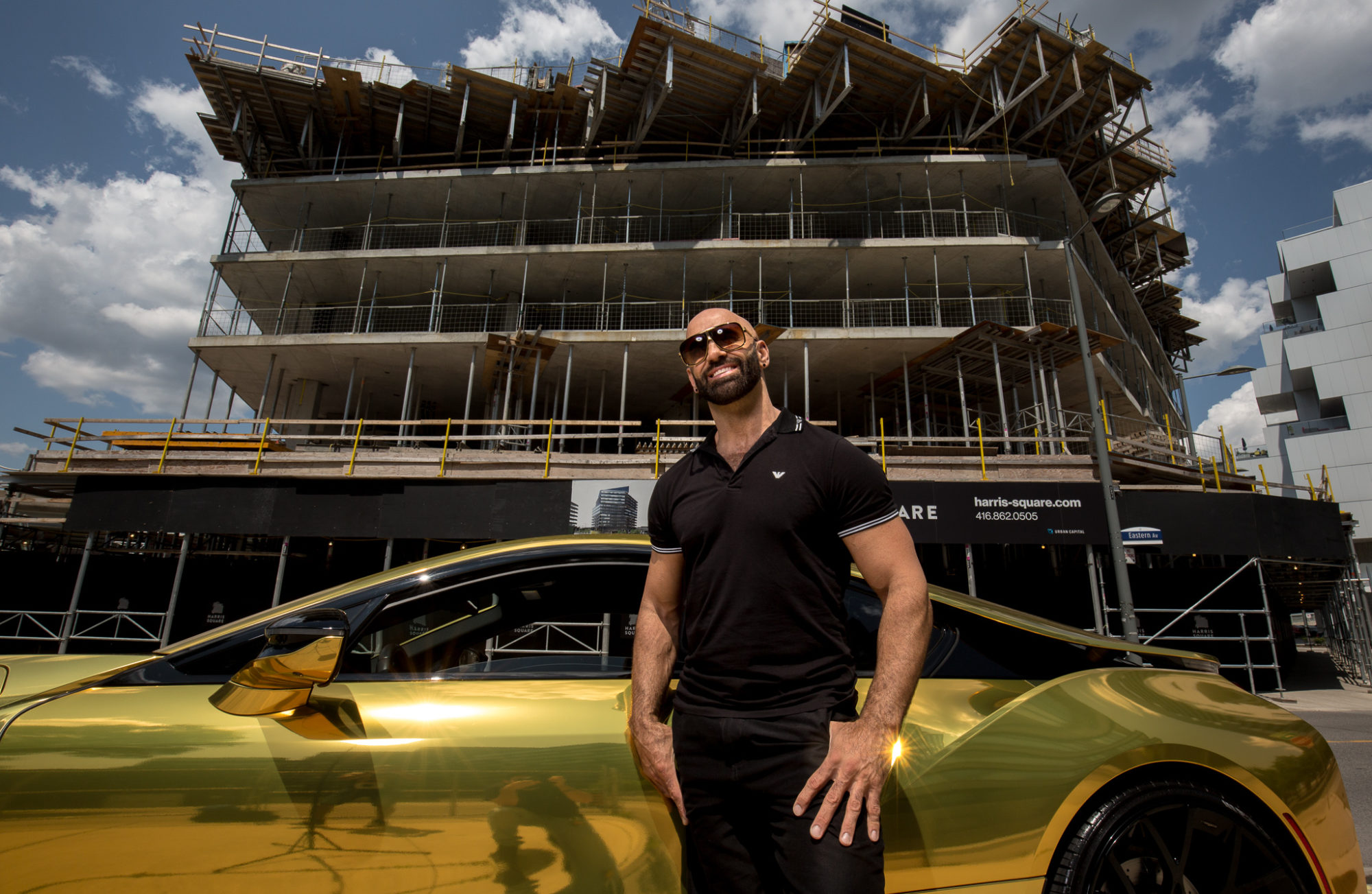 The man with the golden BMW

The backstory: Tony has never had to pay rent. He lived at home during university, and he kept living at home during the first few years of his career as a special education teacher. In 1999, he put a $40,000 deposit on a pre-construction two-bedroom condo near Richmond and Spadina, priced at $213,000. At 34, he said goodbye to his parents and moved into the condo. He has lived there ever since.

In 2009, he put down a deposit on a second condo, intending to rent it out. It was a tiny one-bedroom unit at Queen and Broadview with a $200,000 price tag. When it was finished a couple of years later, he had no trouble finding a tenant. What’s more, the place made him money on a monthly basis: even after mortgage payments, condo fees and taxes, he was able to pocket a modest percentage of what his tenant was paying him to live there.

It was such easy money that Tony put a deposit on a third pre-construction condo in 2013—a two-bedroom at Adelaide and Bathurst, priced at $455,000.

By 2017, condo prices had climbed so high that Tony was able to unload the Adelaide and Bathurst condo for $720,000 before it was even finished. He used some of the profits to put a deposit on another pre-construction two-bedroom condo in a building near Queen and River, with a list price of $579,900. He plans to rent out all three of his remaining investment condos once they’re completed in the next two years.

The bottom line: When he closes on his pre-construction units, Tony will owe about $1.5 million on a property portfolio he values at around $3.2 million. He expects to gross around $8,400 per month in rent, which would leave him with about $1,200 in income after he finishes paying his mortgages, taxes and maintenance fees.

Tony’s investment strategy has allowed him luxuries that few teachers can afford. After a health scare three years ago, he bought himself a $200,000 gold BMW i8, with vanity plates that say “I GR8FUL.” Last year, he spent $33,000 on three Raptors season tickets, as a way to spend time with his family and friends.

His strategy may seem risky, but his teaching salary and generous public pension mean he’ll be financially secure even if the market takes a dip. “I don’t live my life worrying about stuff like that,” he says. “You can’t make money by not taking risks.” 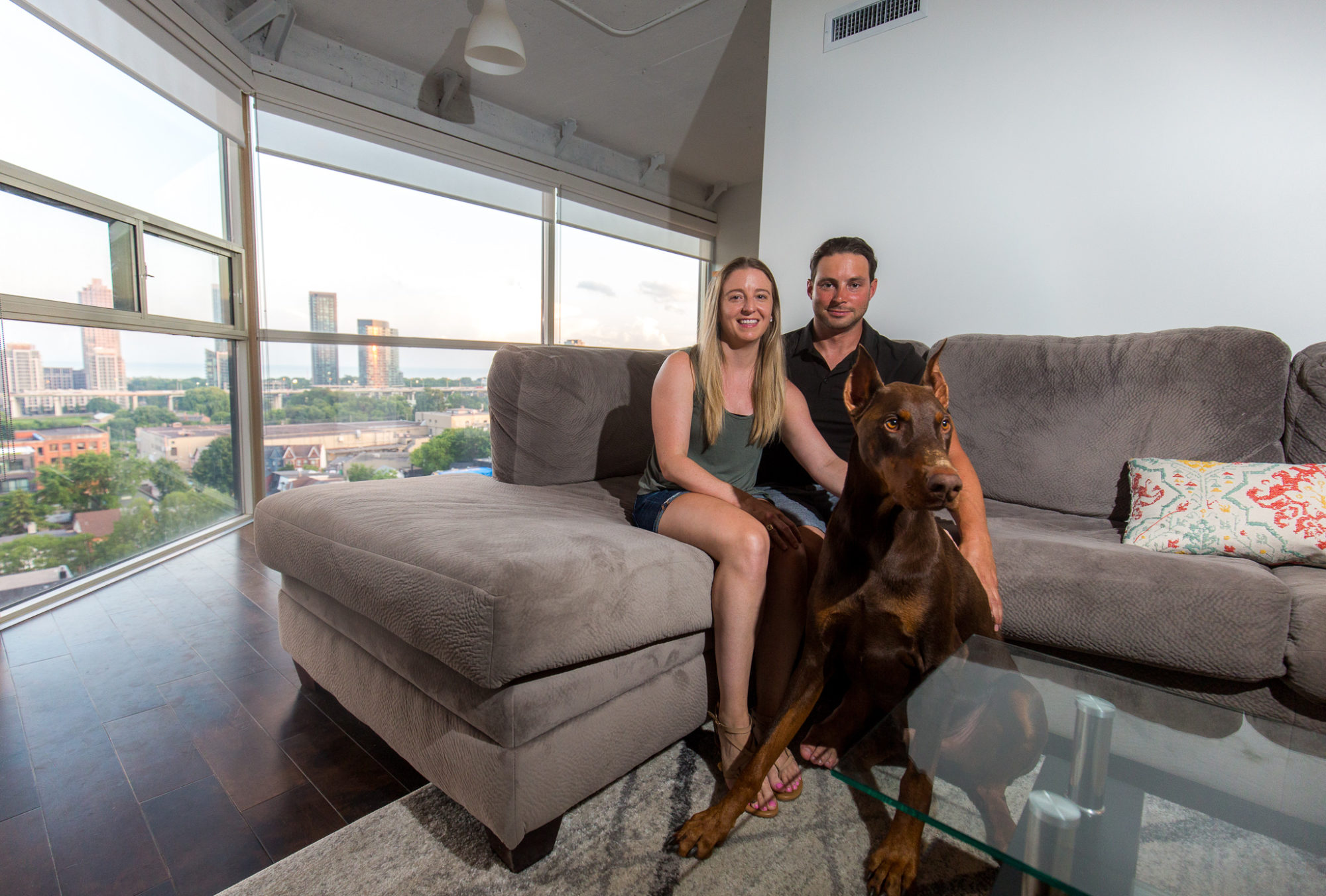 The couple with their dog to thank

The buyers: Britt Gallagher, a 34-year-old operations manager, and her fiancé Mike McCarthy, a 35-year-old ironworker

The backstory: Mike lived at home with his parents in Unionville until he was 27, which allowed him to save $30,000 for a down payment on a condo. He picked a 700-square-foot one-bedroom in an older building near King and Bathurst and paid $293,000.

Four years later, he started dating Britt and invited her to move in. In 2016, they got a doberman puppy named Harley, but a building manager informed them that the condo board had a strict 25-pound limit on dogs. They weren’t willing to give Harley up, so they decided to move.

They didn’t go far. They found a two-bedroom, two-bathroom penthouse in a dog-friendly building next door. It cost them $482,000, and the move was a breeze. They didn’t even need to rent a truck.

The idea of having a second mortgage was scary, but they decided to keep the one-bedroom unit, figuring they could rent it out, break even on the monthly carrying costs and eventually sell it for a profit. Britt found a tenant through a friend of a friend, who now pays $1,975. At that price, Britt and Mike are able to cover their monthly payments on the first mortgage, plus maintenance fees and property taxes. They’re left with a surplus of about $50 each month to put toward any surprise costs. So far, there haven’t been any.

The bottom line: They still have to pay off the $200,000 remaining on the mortgage for their first condo, plus the $450,000 remaining on condo number two—but their monthly expenses, including taxes and condo fees, are a manageable $3,000. The old condo has already appreciated to around $500,000—nearly double what Mike bought it for less than a decade ago. Britt says they have Harley to thank for it. “We joke that he’s our half-million-dollar dog,” she says. 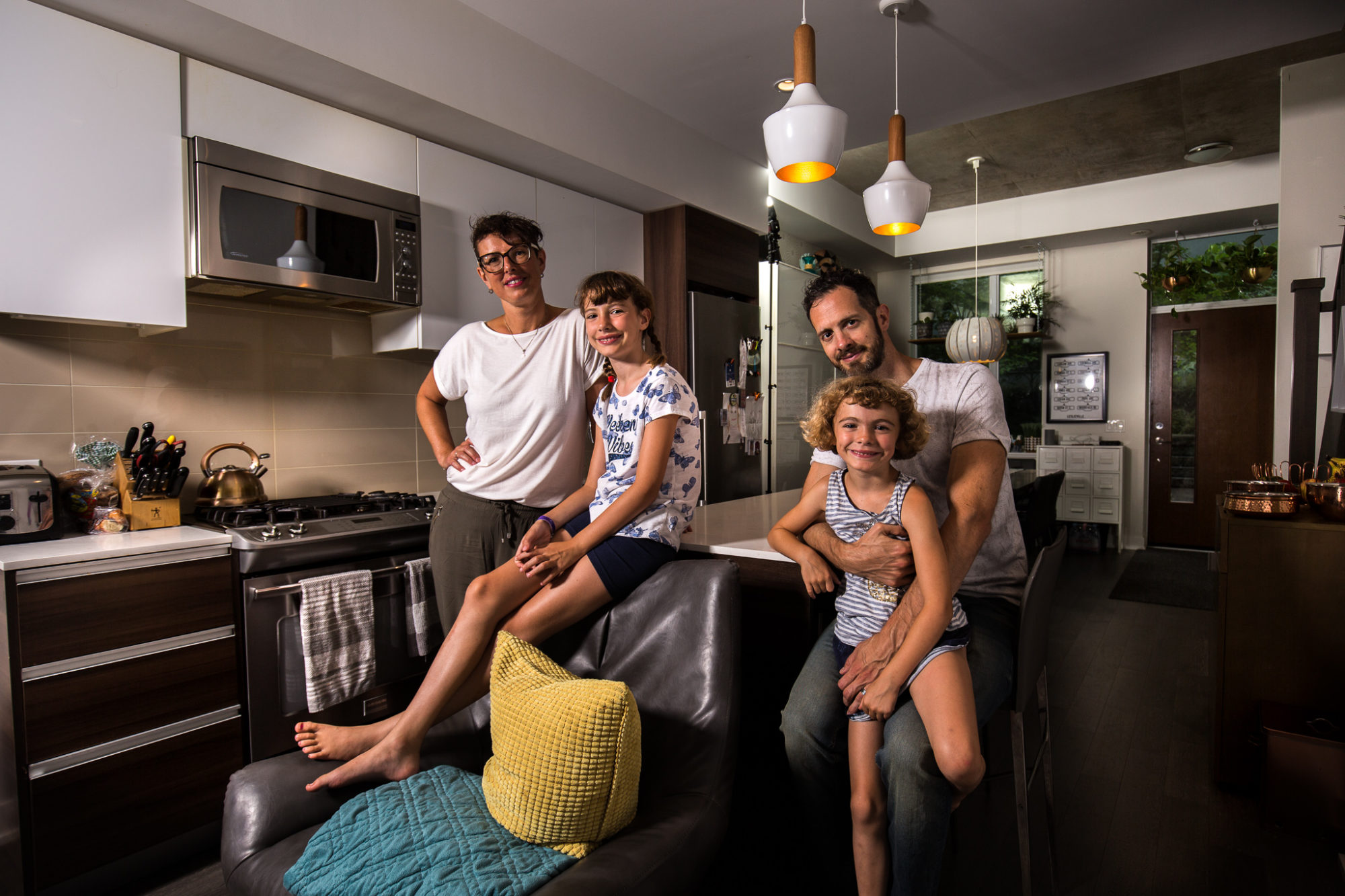 The buyers: Megan Meaney, a 43-year-old non-profit director, and Paul Meaney, a 41-year-old return-to-work specialist with the WSIB

The backstory: Megan and Paul met in 2002. A few years later, they bought a two-bedroom condo on King West for $229,000. They loved the building’s amenities, which included free fitness classes, tennis courts and indoor and outdoor pools. At 1,000 square feet, their unit worked well for them even after their first baby, June, was born in 2010.

In 2012, Megan was pregnant with baby number two, so they decided it was time to start looking for more space. They knew they didn’t want the hassle of maintaining a freehold house, so they focused their search on condo townhouses that were biking distance from Megan’s work at Richmond and Spadina. Just a few months after baby Violet arrived in 2013, the couple put a deposit on a three-bedroom pre-construction townhouse in Leslieville. At $579,000, including parking, it seemed like a steal.

They were considering selling the King West condo once the townhouse was ready in 2016, but they liked the idea of collecting rental income.

They were nervous about being landlords, so they re-upped the mortgage on their condo for just a two-year term, and they hired a real estate agent to help them screen tenants. The agent found them three young professionals, one of whom was willing to sleep in the solarium. The only minor stress Megan and Paul have encountered as landlords was a plumbing issue that set them back a few hundred dollars. Things have gone so smoothly that they’ve renewed their rental property mortgage for a full five-year term. They now plan to hang on to the condo until retirement, when they’ll either sell it or move back in.

The bottom line: They owe a total of $669,000 on the two properties, which are now worth around $2 million combined. Their monthly expenses for both homes tally up to around $5,000, but nearly half of the bills are covered by the $2,385 they receive from their tenants.

Are you a condo investor? We want to talk to you.