A Toronto couple could work remotely. So they moved to this $1.6-million Blue Mountain mansion

A Toronto couple could work remotely. So they moved to this $1.6-million Blue Mountain mansion

The buy: A contemporary four-bed, four-bath in Collingwood 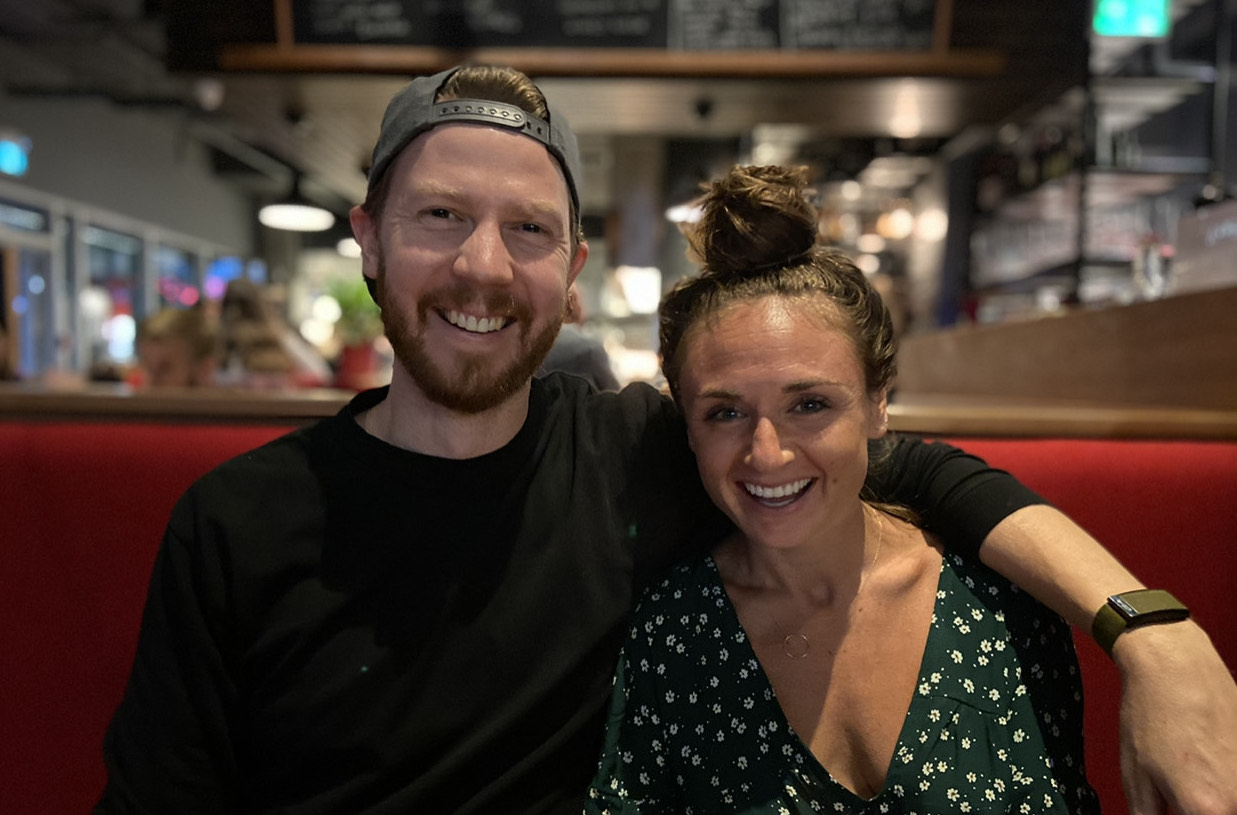 Parker: I grew up around Yonge and Lawrence, and spent every summer weekend at our family cottage near Parry Sound, sometimes for a month at a time. I was always looking forward to the next cottage experience. After graduating from Laurier, I stayed in Toronto, living in High Park and Leslieville.

Chrissi: I grew up in Moore Park and we both went to Northern Secondary School, though we didn’t really cross paths. We were a year apart, and Parker was in a different program. I’ve always been an outdoorsy, active person. When I was younger, I spent July at summer camp and August at our family cottage in Port Elgin. I went to Dalhousie for my undergrad, then moved to London, U.K., for grad school. I started working for Shopify in August 2017, as an internal communications strategist, eventually getting promoted to the technical lead of internal campaigns and storytelling.

Parker: I always envisioned moving out of the city someday, somewhere I could be closer to nature and activities. You have to search for ways to be active in the city. But my career made me stick around. After getting my CPA and CA, I worked as a commercial account manager for BMO before taking a finance job in 2018 with Compound Studio.

Chrissi: Personally, I never thought it would be possible to live outside of the city. My career has been so deeply tied to location, and I never wanted to commute back and forth every day. I would have loved to live in a smaller town, closer to the water and nature trails, but never thought my career would allow it. In the summer of 2018, I bought a three-storey church conversion at Pape and Danforth for $950,000. I renovated the kitchen and bathroom, painted everything and brought in furniture and decor that reflected my style. I wanted the place to feel warm and welcoming, with a relaxed bohemian-chic aesthetic. The renovations cost roughly $65,000.

Chrissi: I thought he looked familiar, and once we started messaging, we realized we went to the same high school and had hundreds of mutual friends on Facebook. We instantly clicked. We went on our first date to a pool hall, and started hanging out every day after that.

Parker: We had a lot in common. We both loved camping, cottaging and music. I moved in that May. We found we were spending every night with each other, and Chrissi had a nicer place than I did, so we naturally spent more time there. First I moved my barbecue over, then we decided to get rid of my place, a 550-square-foot condo at Queen and Broadview, which I rented for $1,800 a month.

Chrissi: We loved being at my place, especially since it had split levels and offered some spatial separation. Parker could be watching TV and I could have my girlfriends over for dinner in the kitchen. There was also a big outdoor deck, which we were grateful for during Covid. But we knew we didn’t want to stay in the loft forever, especially if we planned to start a family one day. We had started looking at houses in Toronto, particularly in the Beaches, but everything was just too expensive. We wanted a detached home that didn’t need any renovations, with a backyard and parking—which was impossible to find within our budget.

Parker: When looking at houses in Toronto, there was always some major compromise to make. Anything that piqued our interest ended up going for more than $200,000 over asking. So we started to expand our search area.

Chrissi: In the first month of the pandemic, we started talking about how great it would be if we could be up north, since both of us were able to work from home anyway. We considered camping out at our family cottages in Parry Sound and Port Elgin, but neither were winterized, so it wasn’t possible when it was still chilly back in March. We found ourselves constantly thinking that, despite everything awful happening in the world, we would be so much happier if we could be more immersed in nature, instead of stuck in the city surrounded by grey snow and empty storefronts. Our companies allowed employees to continue working remotely, even after restrictions were lifted.

Parker: My company found that employee performance actually improved when everyone worked from home. We decided that, moving forward, employees would only be required to work from the office a couple of days per week. If we moved outside of the city, I could just make the trip into Toronto on work days.

Chrissi: Shopify announced it was going totally digital in May, letting employees work from anywhere with a solid Wi-Fi connection. So we started perusing real estate listings. We were interested in Collingwood because it’s a great four-season town; it’s only two hours away from Toronto and an hour away from our family cottages; there’s plenty of development under way, so we wanted to get into the market while things were still relatively affordable; plus, Parker’s brother lives there.

In July, our realtor found us an airy four-bedroom, four-bathroom home listed for $1,600,000. At 5,000 square feet spread across two storeys, it was contemporary yet classic, with really high ceilings, heated concrete floors, a massive wood-burning fireplace and tons of windows. I particularly loved all the natural light. I started collecting plants during lockdown, and I knew they would be able to thrive there. There was no work to be done, and we finally found that turnkey appeal that was so hard to get in Toronto. Plus, it was only a three-minute walk to the bottom of Blue Mountain, where we could snowboard before and after work, hit the nearby hiking trails or grab coffee in the village.

Parker: We immediately booked a viewing and drove up. As soon as we stepped inside, it just felt right. I was really excited about the spacious garage. We realized we could choose to be in our dream home in Collingwood, or in a semi-detached home in Toronto that needed work. It made the decision simple. Everything happened really quickly after that.

Chrissi: The night of the offer, we decided to bid $50,000 over asking. We attached a personal letter addressed to the couple selling the place, explaining why we wanted to be the next owners of the home. The hope was that it would set our bid apart from the others, and help them get to know us. By the time we submitted, there were three other offers on the table. We waited anxiously, and, just after midnight, received a call from our agent saying that we got the home and that the couple loved our letter. We poured a glass of red wine to celebrate.

The sale included a September close. In the meantime, I had to sell my place at Pape and Danforth, which made me slightly nervous, because we needed the funds to pay for the place in Blue Mountain. The market had been unpredictable, so we weren’t sure what it would sell for. On July 29, I listed it for $1,295,000, which took into account the recent renovations and some other recent sales in the neighbourhood. Within an hour of going live on MLS, my inbox was flooded with emails confirming viewings. On July 30, my agent called me to say that we had a registered bid of $1,300,000 with no conditions. We happily accepted.

Parker: We officially moved to Collingwood on September 18 and we’re excited for the next chapter. It’s going to give us more time to do what we love. We’ll go on long walks with our 10-month-old toy maltipoo, Sadie, snowboard on the weekends and get to know some of the small local businesses.

Chrissi: It’s a big change, but it feels right. Blue Mountain has a good vibe—people are friendly, outdoorsy and generally motivated to get outside and do things. I’ll miss the city, sure, but I definitely won’t miss searching for a parking spot or being stuck in traffic on the DVP. We’ll miss our friends and family, along with the vibrancy and cultural diversity of Toronto. We hope people will come visit.

Parker: Since both of our parents still live in Toronto, we can stay with them whenever we need to come back. Before, we spent every weekend escaping to the cottage, so we thought, Why not spin this setup on it’s head? Instead of spending two days a week up north, we can spend one or two days a week back in the city. We’re just switching up the home base.