Condo of the Week: $1.55 million for a three-bedroom suite in one of Canada’s oldest luxury towers

Condo of the Week: $1.55 million for a three-bedroom suite in one of Canada’s oldest luxury towers

A large, three-bedroom unit in one of Canada’s oldest luxury condo towers. It juts out from the building and has plenty of windows, so the owner can see Lake Ontario from nearly everywhere. The dining room, with fancy chandelier: And here’s the updated kitchen. Judging by the photos alone, you’d never guess this place was almost 40 years old: The kitchen has a dining area of its own: There are two guest bedrooms. Here’s one: The master bedroom has its own office alcove: Completed in 1978, Palace Pier was described by the Toronto Star at the time as “among the most elegant and luxurious in any city in North America.” The Star also noted the condo’s “car-oriented adult clientele.” Three-bedroom units like this one started at $184,000 during pre-construction in 1977. Maintenance fees ran about $400. This unit was recently modernized. The most recent owner has died.

The developers didn’t skimp on amenities. The health-conscious can use the pool, squash courts, gym, tennis court or putting green. There’s also a billiards room, arts and crafts room, carpentry room, library and 64-seat restaurant. The rooftop space has a sun deck, theatre and bar. The building also has a 24-hour concierge and valet parking.

Like many early condos, this one has no balconies. There are, however, communal barbecues and picnic tables at the base of the building.

Real Estate News In Your Inbox

“Before we moved to Toronto, we’d only been here once, for 36 hours” 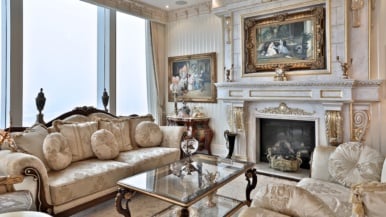