This Toronto family wanted a home with character, so they bought a $390,000 church near Hamilton. Now they just have to convert it

This Toronto family wanted a home with character, so they bought a $390,000 church near Hamilton. Now they just have to convert it 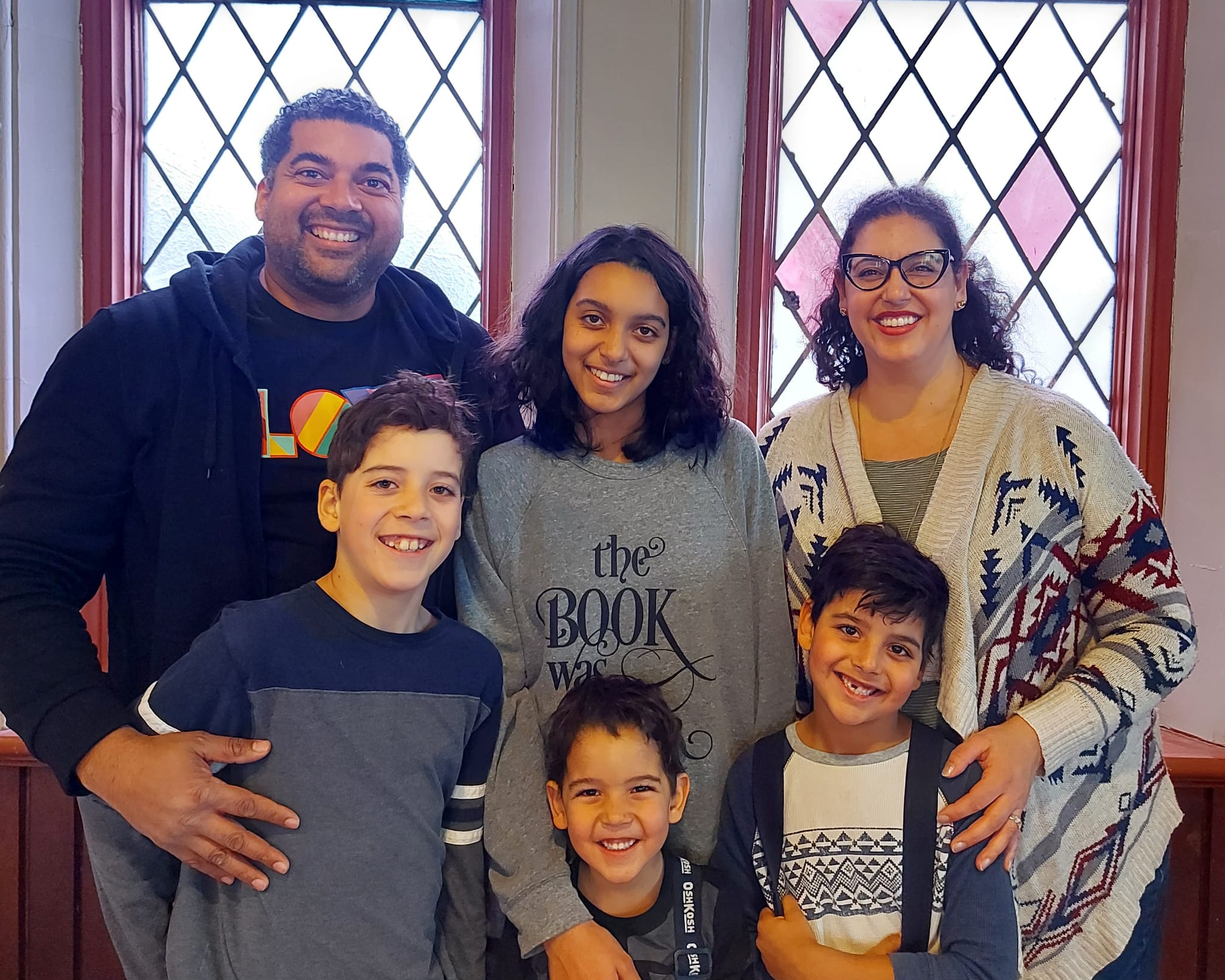 The history: Tao grew up in the country, near Collingwood in an area called Mansfield. One of his parents’ friends lived in a converted schoolhouse, which Tao admired. He remembered there being a few renovated churches in the region, and thought he might be able to live in one someday.

In 2004, Tao met Andresa—who also grew up outside of the city, near Caledon—while they were both living in Toronto. Andresa shared Tao’s desire to live in an unconventional home with a lot of character.

In 2009, they moved into a three-bed, two-bath townhouse north of High Park, just before their daughter, Lotus, was born. The family stayed in the rental while Tao and Andresa looked for something to buy—specifically, a church somewhere in the city.

However, they soon found themselves priced out of the market, so they remained in the rental as their three sons—Phoenix, Quest and Eros—were born, and put their church conversion plans on hold for the next decade. Tao ran his own renovation business while Andresa kept the household running as a stay-at-home mom.

When the pandemic hit, in March of 2020, the Draytons were up in Caledon visiting Andresa’s mother for the week. She lives in a large country home on 11 acres, and with the city on lockdown and schools going remote, Tao and Andresa figured they’d stay in the country to spend more time together.

During the pandemic, Tao’s renovation business was on hold. Tao and Andresa enjoyed seeing how their kids adjusted to country life. They loved playing outside, building forts and watching the wildlife, especially birds.

It reminded Tao and Andresa of their own rural childhoods, which they remembered fondly. Suddenly, the timing seemed right, and they figured they could finally start looking for a church to purchase outside of the city, which would be more affordable and would also give their kids an opportunity to grow up in the country.

The hunt: The Draytons began their hunt for a church at the end of 2020. They wanted to stay within a 90-minute drive of the city and needed a minimum of 2,000 square feet. They were also looking for some outdoor space for the kids to play.

In December of 2020, they viewed a church near Napanee, but the place was a bit too spooky, with stained glass depicting images of bleeding saints.

Then, in early January of 2021, they viewed a great church between Hamilton and Brantford. They submitted an offer, but lost out to a higher bid.

In mid-January of 2021, the Draytons visited a church in Haldimand County, 30 minutes south of Hamilton, which was listed at $350,000. It was a former Anglican church built in 1891, which had closed in 2008 because its membership had declined.

There were double wooden doors that opened up into a small alcove and a spacious sanctuary with 20-foot ceilings, complete with pews and stained glass windows. They loved how the sanctuary felt peaceful, since the walls were thick and blocked out sounds from the outdoors.

An alcove led to the bell tower—the Draytons were even able to ring the bell during their viewing by pulling on a long rope. In the basement, there was a powder room, a small kitchen and a meeting area. But it was all in bad shape, with mould growing on the walls and ceilings.

Outside, there was an acre of lawn around the property where the kids could play. The church was right across the street from the Grand River, and five minutes away from a school that the kids could attend.

Plus, the city was just over 90 minutes away, so Tao could keep his business there and it would be easy to visit his family that still lives in Toronto.

But there was a catch—the buyers would need to assume responsibility and care for a two-and-a-half-acre cemetery about 150 metres from the church. It would require having an application approved by the Bereavement Authority of Ontario, which involved getting police checks and incorporating a company. But the Draytons were up for it.

They saw the cemetery as a place that could be peaceful and beautiful, and a way to honour the history of the town and its people. They also talked about it with their kids, who didn’t associate it with being a scary place.

Two days after viewing the church, the Draytons submitted an offer of $390,000, conditional on financing and an inspection. They went over asking since there was interest from other buyers, and also because they were disappointed by being outbid on the previous property.

The church committee, which was responsible for selling the property, kept a two-week period open for offers. Three weeks later, the Draytons found out that their offer had gone through. The church—and its cemetery—was all theirs. 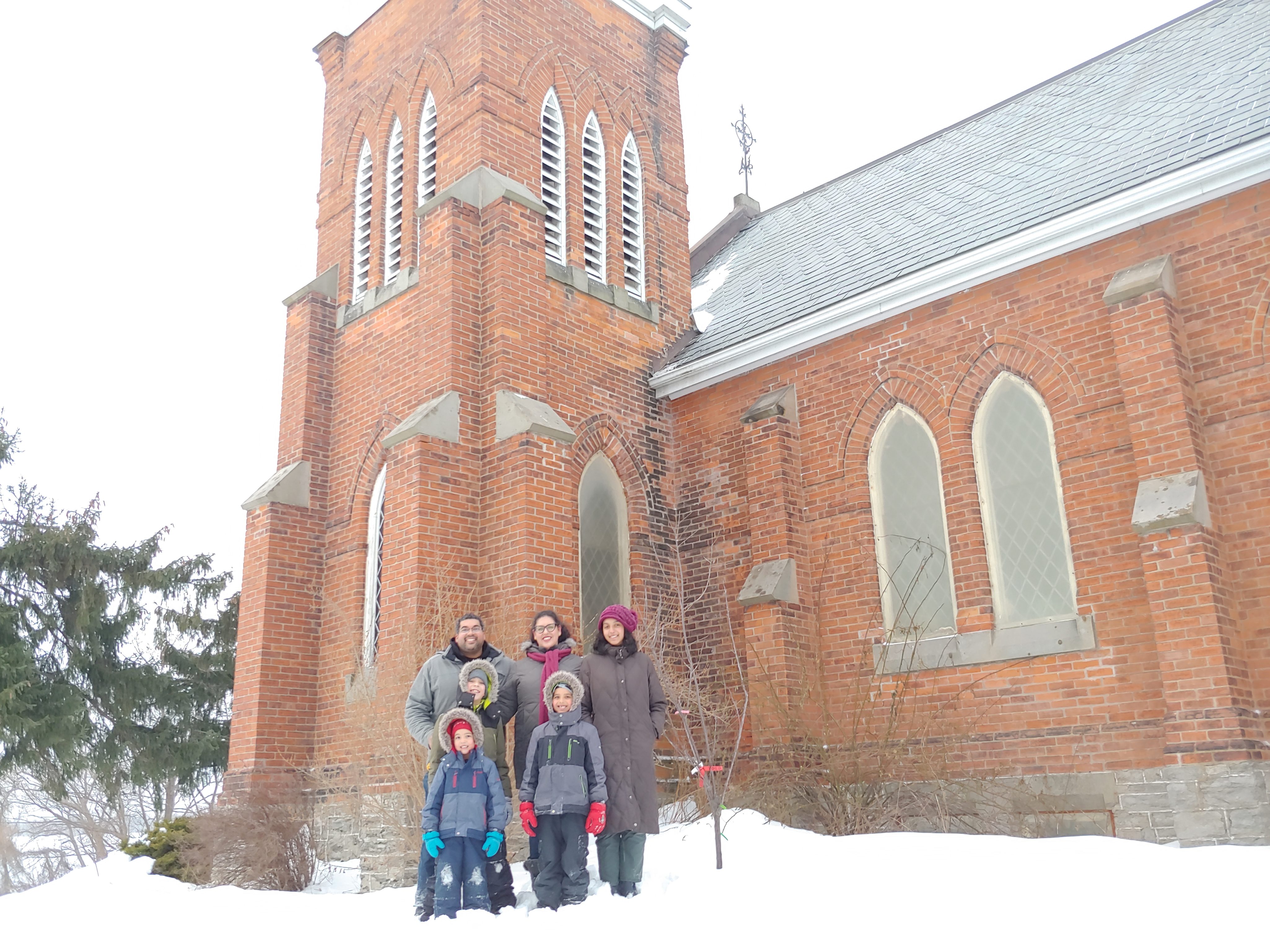 Financing the property was a bit difficult as traditional lenders wouldn’t offer a mortgage on a church. But they were able to find private lenders through a broker, just at a higher interest rate.

During the inspection, they discovered that a family of raccoons had been living in the bell tower, which was falling apart and would require significant repairs. The inspector also suspected that there could be asbestos in the sanctuary flooring, and lead in the wall paint. With these findings, the Draytons reduced their offer to $375,000, which the church committee accepted.

They initially set a closing date of May 7, but the church committee was delayed in processing the sale. This was partly due to Covid, but also because the church property included a seven-foot section of the road, which needed to be sold back to Haldimand County before the sale could go through. That took more time than anticipated.

By June 1, the sale finally closed and the Draytons got the keys to the property—about 50 of them in a Ziploc bag, which included keys to boxes in the pews and an old safe in the altar area.

The Draytons got started with renovations, hoping to spend about $300,000. They wanted to keep the sanctuary as an open-concept kitchen, living and dining room. But that would mean building an addition for their sleeping quarters. They also wanted to build a granny suite for Andresa’s godmother, who would live with them and contribute to the renovations.

The two additions will add about 3,000 square feet of living space. The family’s quarters will have four bedrooms and two bathrooms, while the granny suite will have a bedroom and a bathroom. The basement will become a family rec room where the boys can play floor hockey.

Factoring in the time for renovations, the Draytons hope to move in by the summer of 2022, so that the family settle in before the kids start school in their new town.

Tao is looking forward to completing the reno and personalizing the space with the family’s own design touches. Andresa is eager for more space to host family, out-of-town guests and their kids’ friends for sleepovers, which they couldn’t do in their townhouse.

Since they’ve still got low rent on their High Park rental, they plan to keep the townhouse as Tao’s office in the city and a place for the family to crash when they’re in Toronto.

Meanwhile, Tao and Andresa have already started making plans for maintaining the cemetery. They’ve created a website, which the cemetery didn’t have before. And they’ve got plans to recondition the road that runs through the cemetery, and add benches and a memorial garden where ashes can be scattered.

Tao and Andresa also plan to work with local experts to preserve the historical and family records of people laid to rest in the cemetery. “There’s so much history here,” says Andresa. “There’s so much respect for the continuity of a really important place that needs to continue.” They see it as an honour to be the cemetery’s new caretakers.