This family moved to Toronto during the pandemic. They found a $3,900-a-month rental in East York

This family moved to Toronto during the pandemic. They found a $3,900-a-month rental in East York 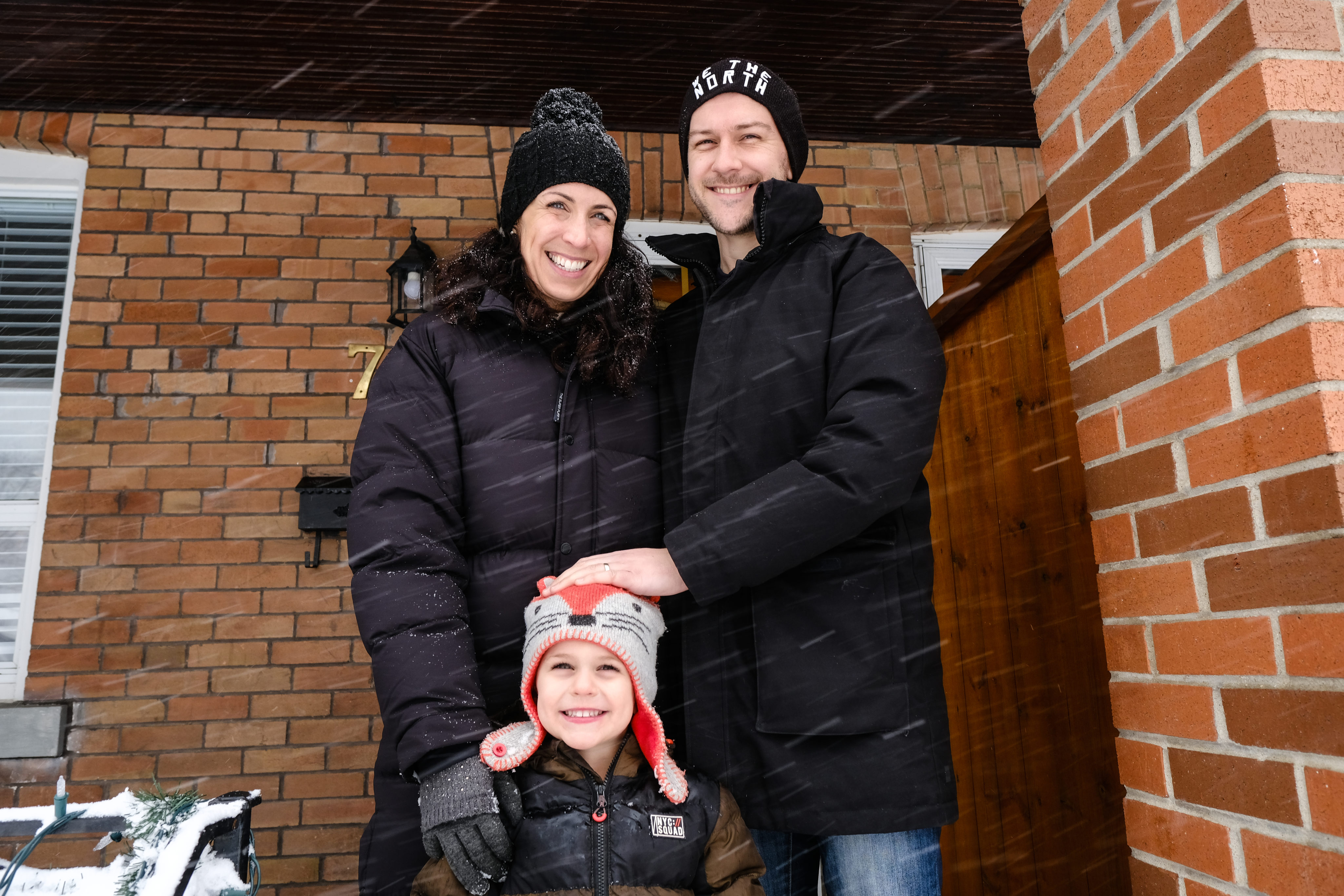 The history: In 2019, Kelly and Paul were living with Duncan in a two-bed, one-bath in London, England. At the time, they were considering selling the place, then upsizing in London or moving to the GTA, where Kelly grew up.

Kelly’s brother lives in Stouffville and she liked the idea of moving closer to family. Kelly also wanted to live somewhere with more of a community feel than London, and figured Toronto would be a better place for Duncan to grow up.

Paul, who’s originally from Scotland, had visited Toronto with Kelly several times over the years and always enjoyed his time in the city. But since Kelly had a good job at a tech company in London and was the primary breadwinner, they decided to stay there at least a little while longer.

A few months before Covid hit, Paul quit his job at a telecommunications company to care for Duncan full time. During lockdowns, Kelly worked from home and set up a small desk in their bedroom, between the closet and the bed.

The family felt like they were living on top of each other. Kelly needed a separate space to work, and Duncan didn’t have enough room inside to play. So, in August of 2020, they explored their options, viewing larger apartments in London while Kelly also applied for jobs in Toronto.

In January 2021, Kelly negotiated a transfer to her company’s office in Toronto. Shortly afterwards, Kelly and Paul listed their London apartment for £400,000. They planned to move to Toronto in May of 2021, but with Covid restrictions, the date was pushed to the end of June.

The real estate market in London was extremely slow in the beginning of the year, so they didn’t get an offer on their home until March of 2021, which they negotiated to £408,000. However, the buyers pulled out of the deal in the middle of May, six weeks before their move to Toronto. It wasn’t enough time to list and sell again, so, instead, they rented it out for £1,400 a month.

The hunt: After the family arrived in Toronto at the end of June, they moved into temporary corporate housing—a two-bed, two-bath condo at Gerrard and Bay—with a plan to move into a regular rental by August 1.

They wanted to be in the east end, making it easier to get on the DVP and drive up to Stouffville. The family needed at least three bedrooms so Kelly could have a separate place for an office. Also on their list: a big basement or backyard where Duncan could play.

In August, the family moved into a three-bed, two-bath semi at Woodbine and Danforth. It had a spacious backyard and a finished basement with an extra bedroom, all for $3,900 a month. 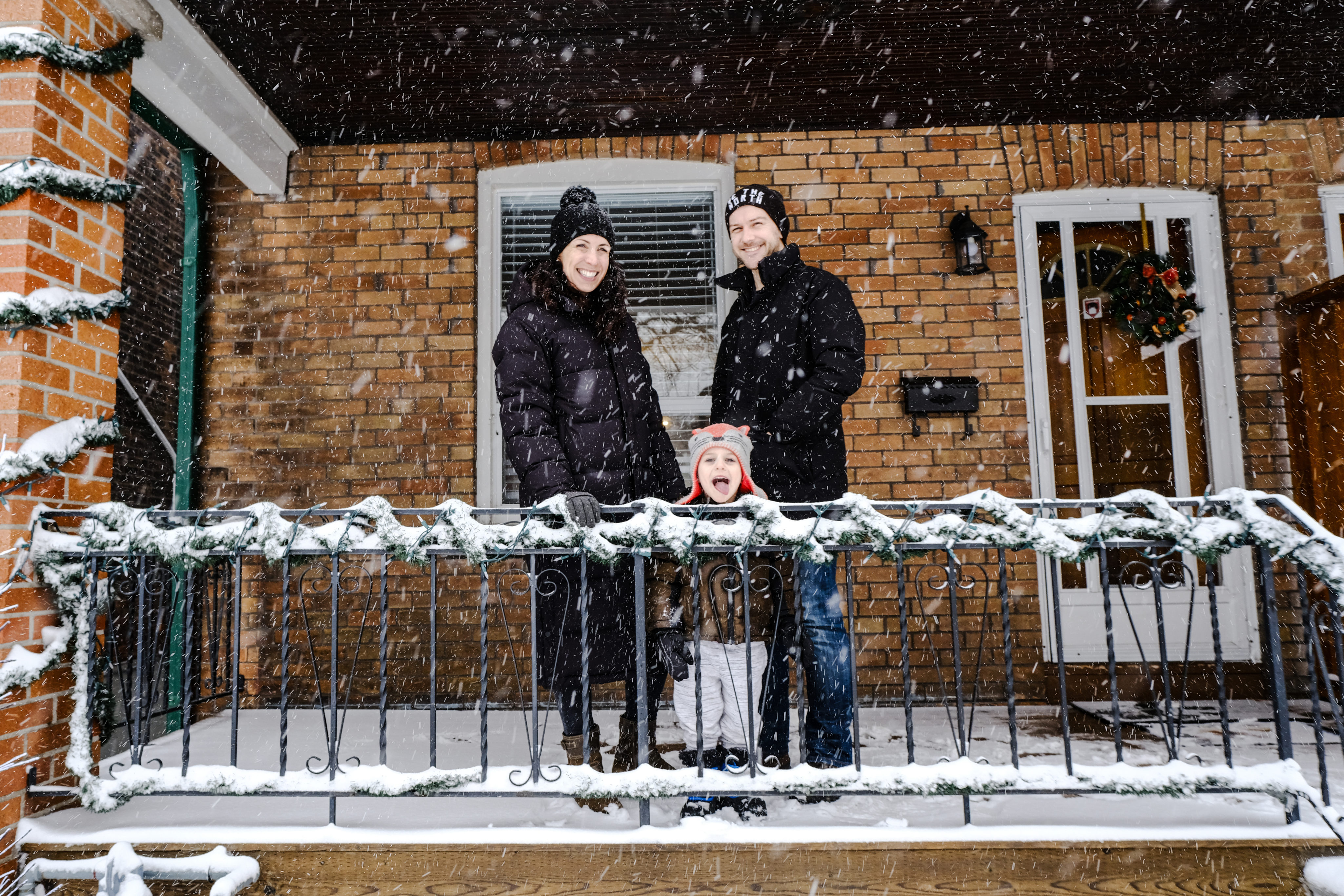 The outcome: Kelly feels at ease being back home. She turned their third bedroom into an office and Duncan has more room to play in the basement. Paul is enjoying having more space, too—he’s an avid gamer and has set up a screen downstairs. 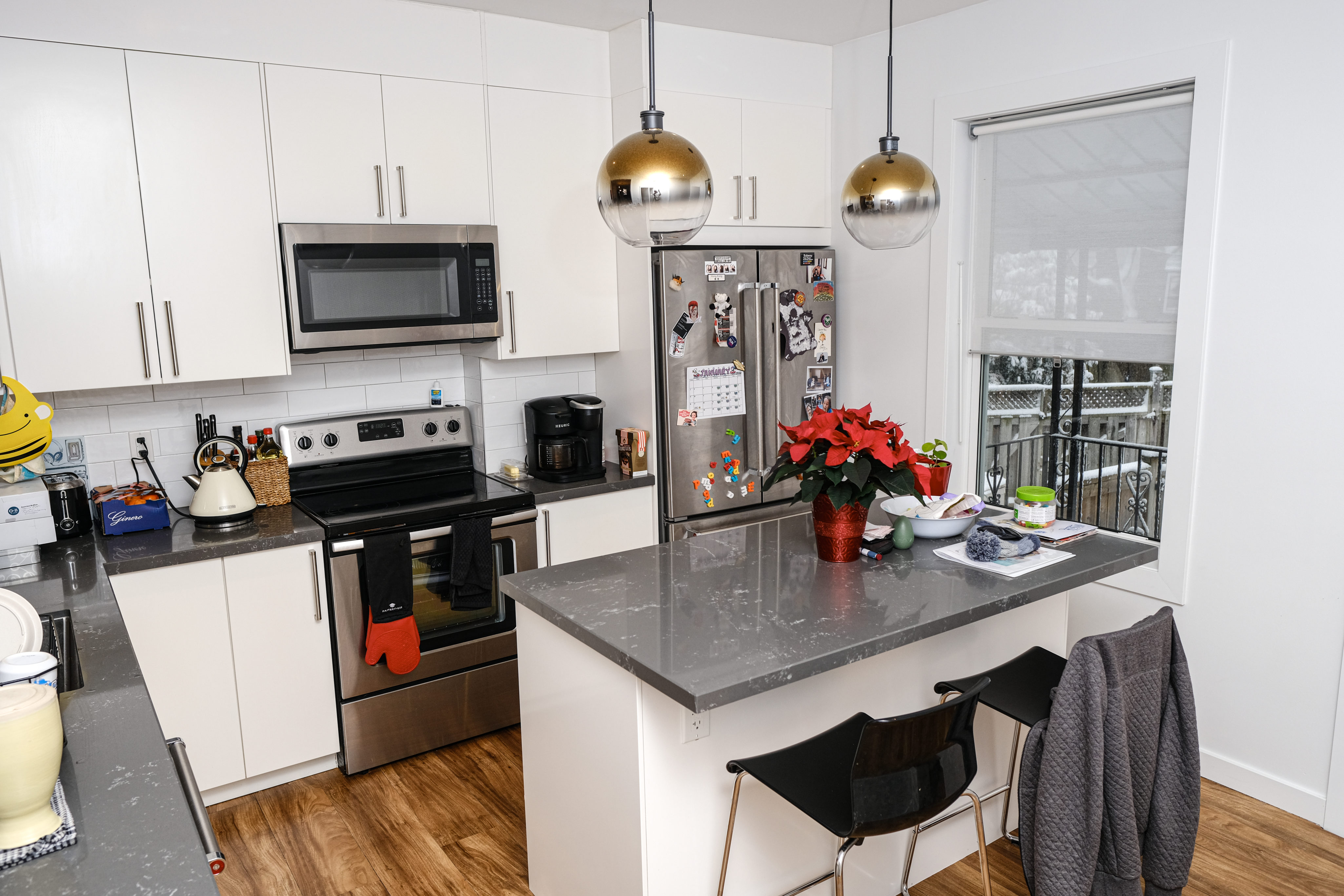 Previously, Duncan and Kelly would have to leave the living room to let Paul game. The basement bedroom has become a guest room, where Paul’s mom stayed when she visited from Scotland in early December.

The family has enjoyed their time in Toronto so far. They’ve been able to explore the east end, going on walks along the boardwalk in the Beaches and wandering west on Danforth toward downtown.

Their new neighbourhood has plenty of families with small children and Duncan has already made a lot of new friends. Kelly and Paul were also able to get Duncan into a TDSB-run daycare for hard-of-hearing children. They live two minutes’ walk from a park with a splash pad, which Duncan loved in the summer. 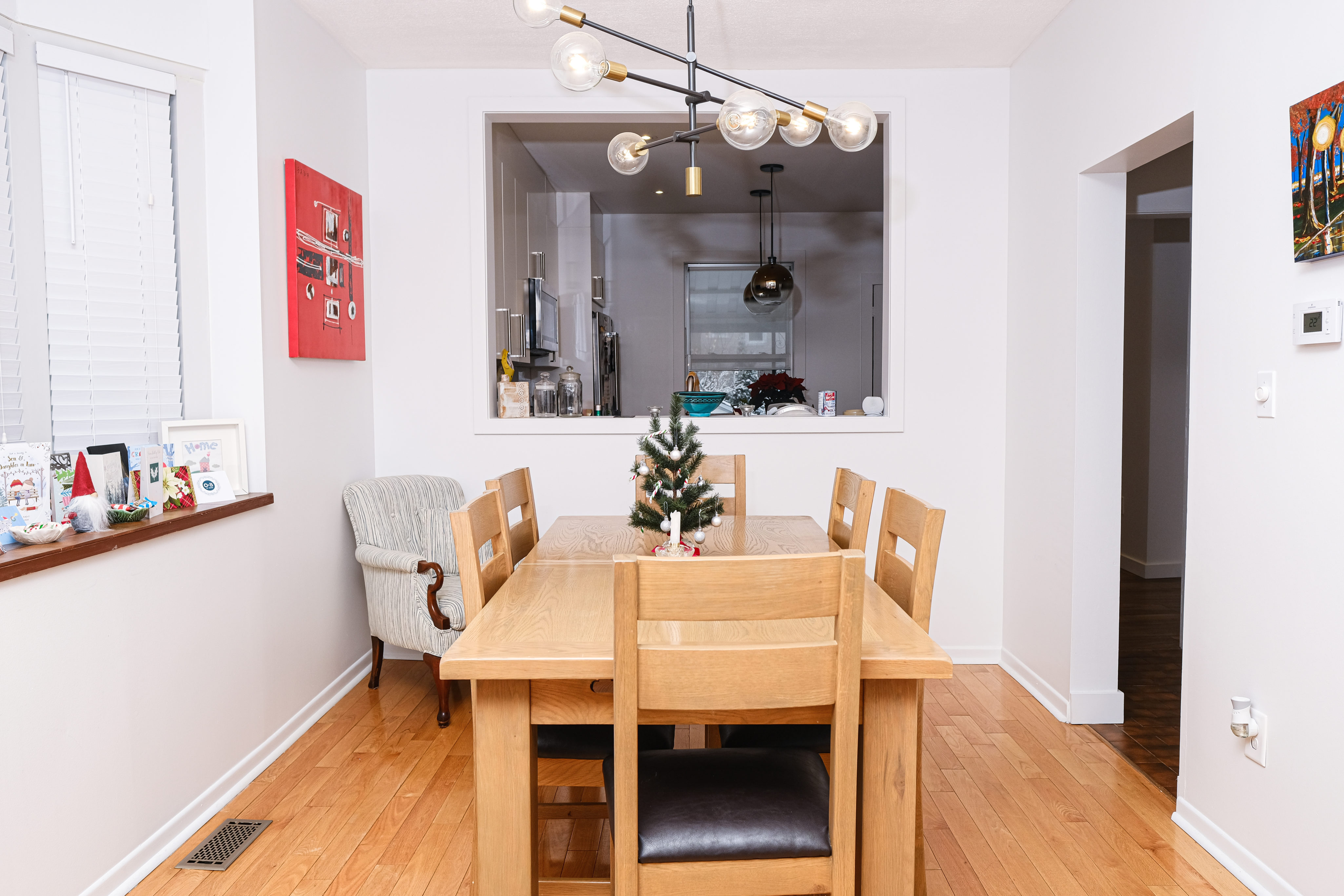 Paul is still waiting for his work visa to come in. In the meantime, he’s taking care of Duncan, setting up their house, assembling furniture and buying groceries. His latest mission is to determine his favourite grocery store, with options including Sobeys, Loblaws and Metro nearby.

The family plans to stay in their rental for at least a year while they get to know the city. In a year or two, Kelly and Paul want to purchase a similar-sized house in East Danforth to set down roots. They plan to sell their flat in London to help fund their home in Toronto.

They’re hoping to find a detached or a semi with at least three bedrooms and two bathrooms, a finished basement and a backyard. They’d like to stay in the same neighbourhood on a quiet street that’s close to parks, shops and restaurants. 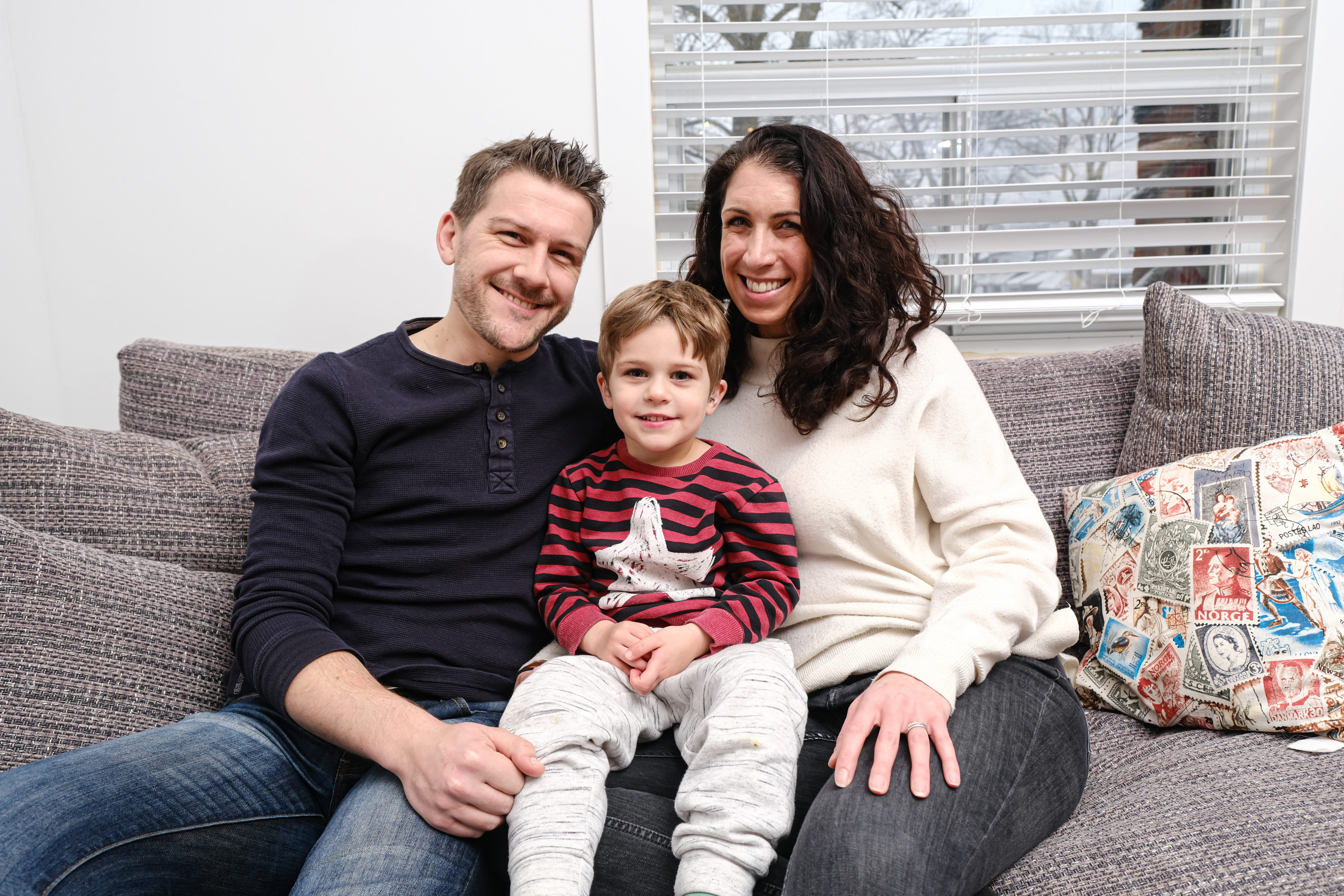 They love being nearer to Kelly’s brother—he’s got two kids, one of whom is a similar age to Duncan. They’ve gone apple picking at Chudleigh’s and have visited farms in the GTA together. The family’s next adventure will be ice skating—they’ve purchased skates for the whole family and it’ll be Paul and Duncan’s first time on ice.

Did you move to Toronto during the pandemic? We’d love to hear about it: realestate@torontolife.com