This couple wanted to ditch the city for more nature. They found a $600,000 home in Collingwood

This couple wanted to ditch the city for more nature. They found a $600,000 home in Collingwood

Who: Matthew Timmins, 32, founder of Leva Sleep, an adjustable bed and mattress company; and his wife Darcie Blair, a physiotherapist; with their five-year-old Boston terrier, Louis 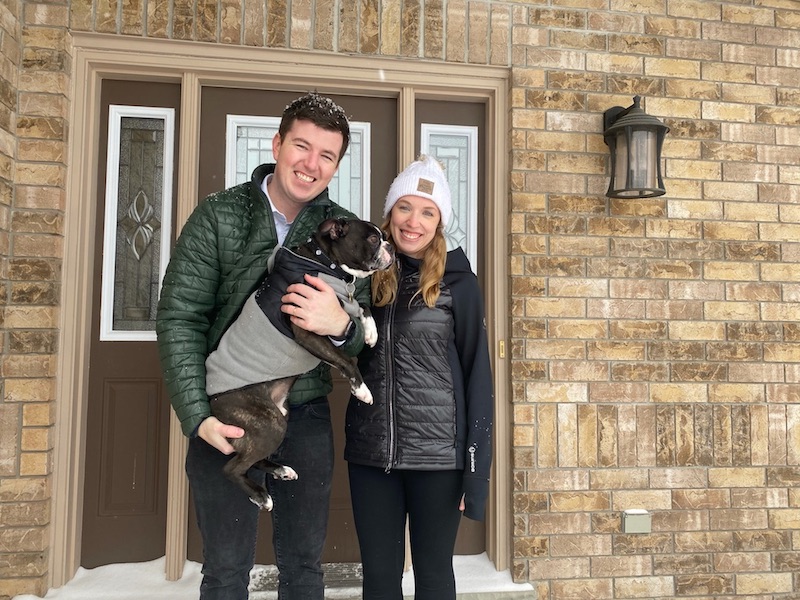 The history: Matthew and Darcie, both from the GTA, first met as teenagers in the mid-2000s. Their families belonged to the same ski club in Collingwood, so they saw each other out on the slopes a few times a year.

In 2016 Matthew started his own business, Leva Sleep, an adjustable bed and mattress company. Later that year, he reconnected with Darcie at a Christmas party hosted by a mutual friend from the ski club. They started dating shortly after.

Fast-forward to the winter of 2019, when Matthew and Darcie moved into a one-bed, one-and-a-half-bath basement rental in the Junction, paying $2,550. Around that time, the couple got engaged and started planning a wedding for summer 2020. They also discussed buying a property, but it was too expensive in the city. Matthew suggested moving outside of Toronto, but Darcie, a self-professed “city girl,” was reluctant to give up all of her favourite shops and restaurants.

Things changed when the pandemic hit in early 2020. Darcie, who works as a physiotherapist at a health clinic, started conducting virtual appointments from home, going into the office only a couple of times a week for in-person visits. Meanwhile, Matthew’s company experienced an increase in business, with most people stuck at home and hoping to improve their living spaces. But with both of them working at home, the couple realized that they needed more space.

That summer, Matthew and Darcie got married during an intimate ceremony on a dock in Muskoka. They continued spending time up north after that, at Darcie’s family cottage, in an effort to escape the pandemic. Being in cottage country made them realize how much they liked being in nature. And with businesses in Toronto closed anyway, Darcie figured she could give up the city amenities that originally made her want to stay.

Darcie liked Collingwood, in particular. It still had shops and restaurants. Their Toronto friends visited the area often. Darcie could transfer to a health clinic nearby in Barrie, while Matthew could work at his company’s second location, which was set to open in Barrie in 2021.

The hunt: In October 2020, Matthew and Darcie started to take their search seriously. They calculated their monthly expenses and set a maximum budget of $800,000, which would allow them to travel and eat out on a regular basis once the world eventually exited lockdown. Then they contacted real estate agent Melissa Worts of the Chris Keleher Team. The couple wanted a move-in ready home with at least three bedrooms for a future family, plus a big backyard where their dog, Louis, could run around.

After viewing 10 properties, their realtor sent them a listing for a three-bed, one-and-a-half bath listed for $600,000, in a neighbourhood called Creekside. At 1,750-square-feet across two storeys, the place had big bedrooms, an unfinished basement with serious reno potential and a nice back deck where they could imagine themselves watching Louis play in the large fenced-in lot. They liked Creekside, too, with its parks, playgrounds, trails and community vibe.

Matthew and Darcie put in an offer at asking, conditional upon a home inspection, with a closing date of December 31. The lease on their Junction apartment ended January 2021, so they wanted to move in before then. A couple of days later, they heard back from the sellers, who agreed to accept the offer if Matthew and Darcie moved the closing date up to December 1. That sealed it.

The outcome: Before moving in, the couple had to do some renovations. They had the walls repainted and hired contractors to replace the carpets with vinyl flooring, for a combined cost of roughly $13,000. The couple also set up an office in one bedroom, with the other bedroom serving as a guest room once visiting restrictions are lifted.

Darcie ended up transferring to a clinic in Barrie and Matthew plans to keep driving to Toronto a couple of times a week for work, until the new Barrie location of his business opens in May. And Louis is already enjoying the nearby trails.

Since they came in roughly $200,000 under their max budget, Matthew and Darcie plan to finish the basement, adding a laundry room, bedroom, bathroom, office and recreation room. They expect it to cost roughly $50,000. Overall, they were sad to leave Toronto, but Matthew and Darcie are looking forward to starting their future in Collingwood.