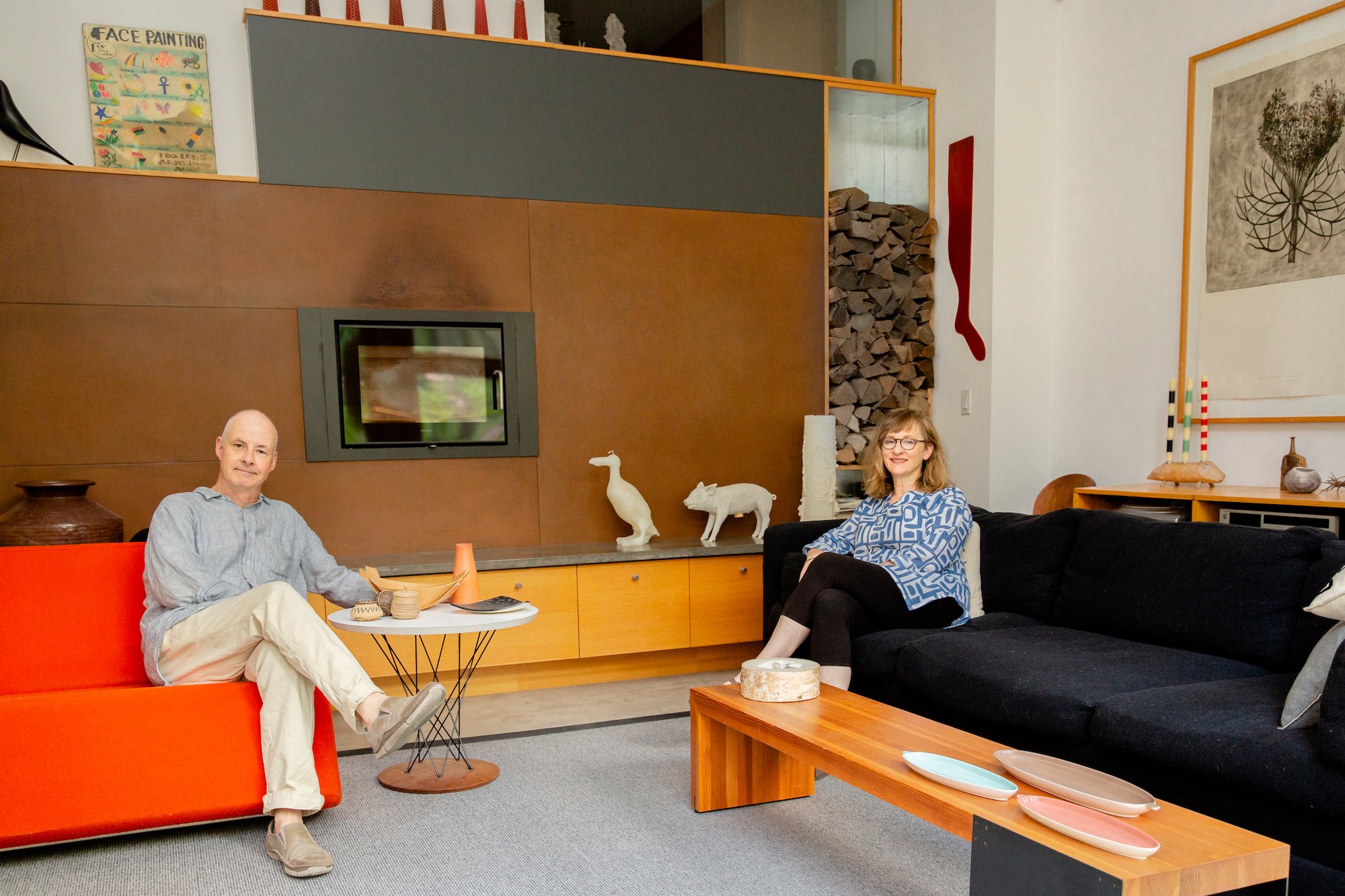 Who: Peter Fleming, head of Sheridan College’s furniture program, and Debbie Adams, a graphic designer; with their cats Mabel and Hazel. 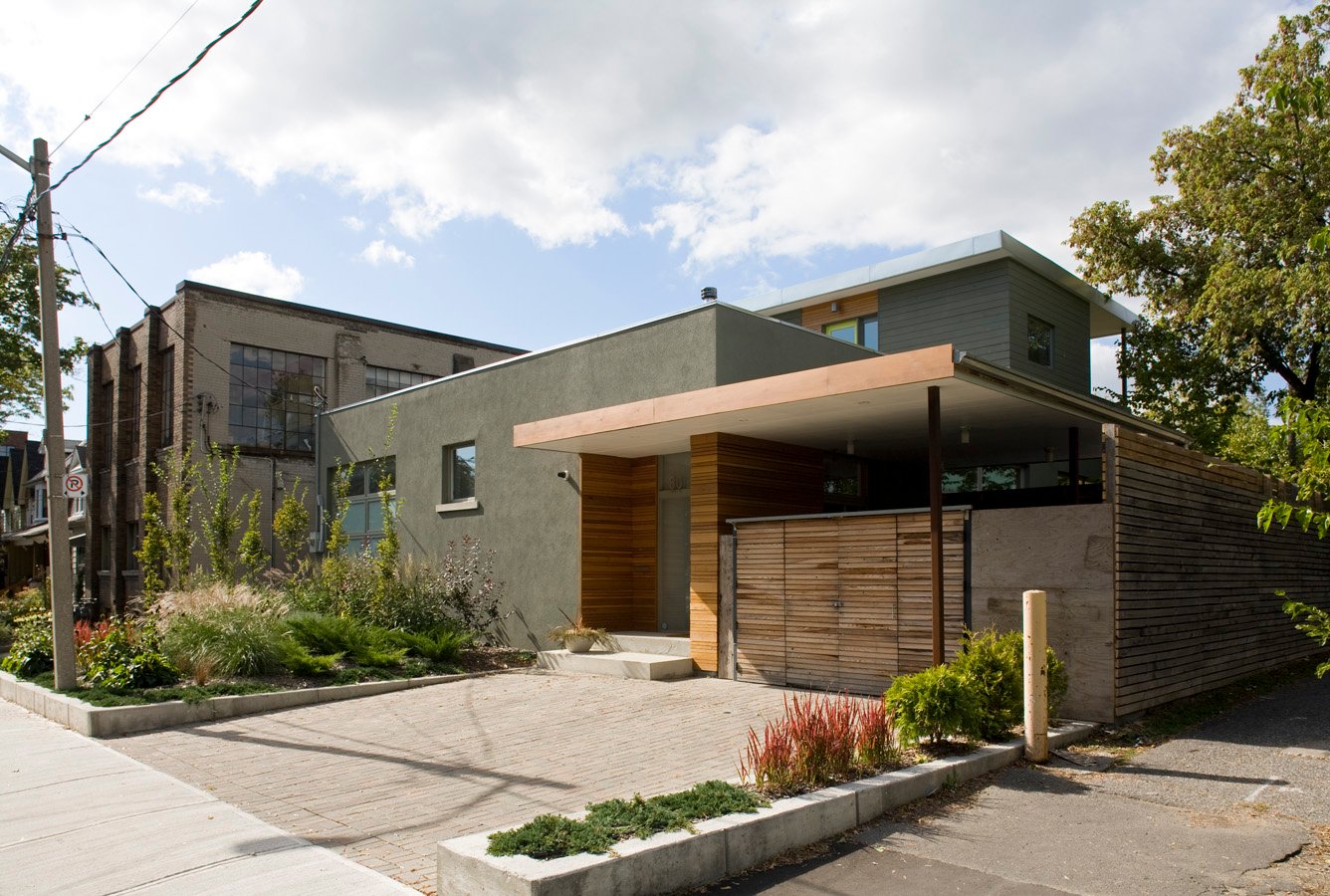 In 1989, Debbie and Peter scooped up an Edwardian semi in Parkdale for $250,000, and rented out part of the house to offset their mortgage. Eleven years later—exhausted by landlord life and feeling confined in their semi—they set their sights on a detached home for just the two of them. Ideally, they were looking for a freestanding building with more space and privacy. “As designers, we were open to oddball properties,” says Debbie.

A few months into their search, while doing a grocery run at the Loblaws near Bloor and Dundas West, Debbie noticed the neighbouring 1950s cinderblock building—a former auto body shop then used for storage—had a For Lease sign, and she thought it might just have what they were looking for. 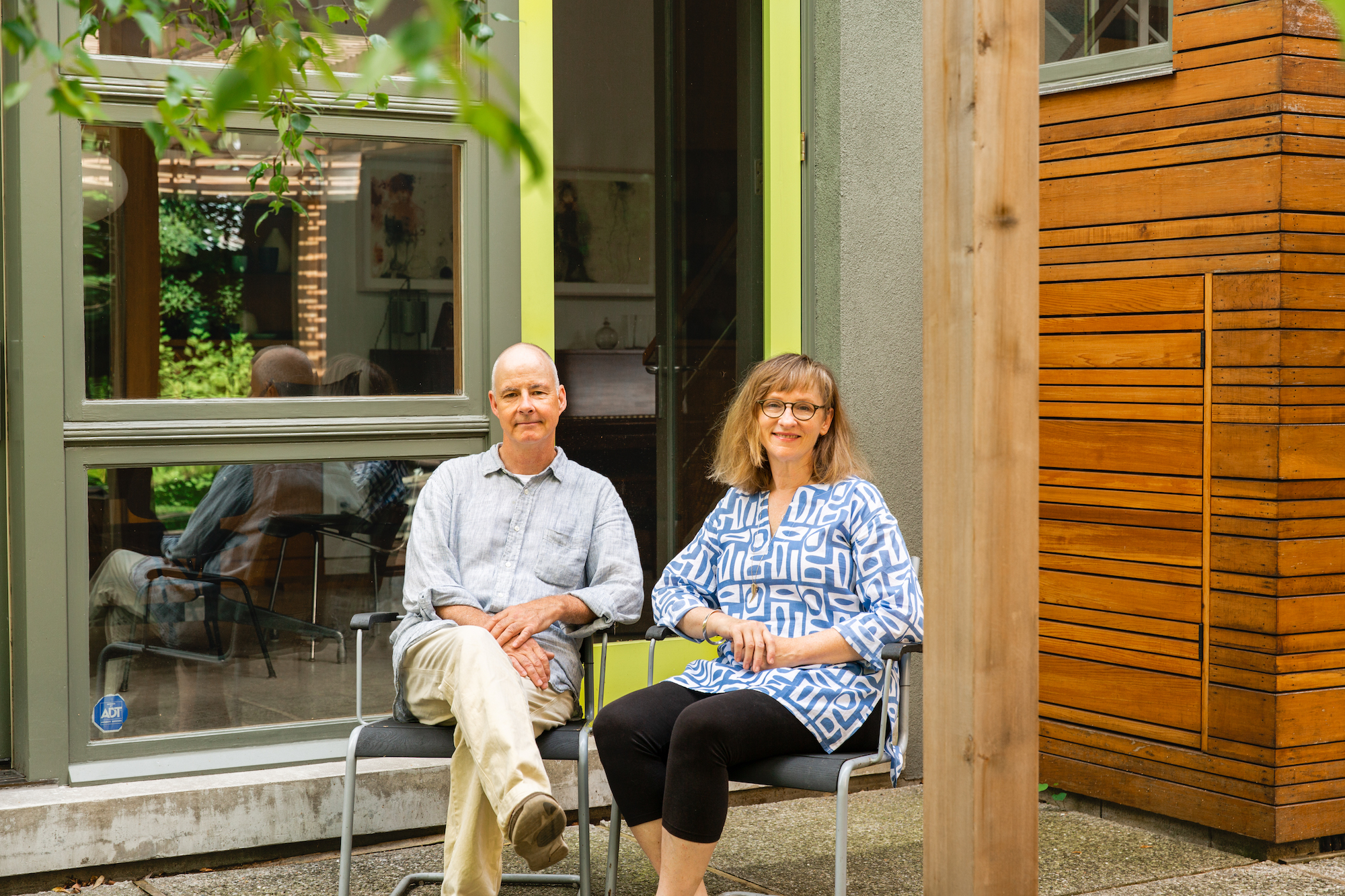 When they visited, Debbie and Peter were awestruck by the 13-foot ceilings, large windows and clear-span interior, with no columns to support the roof. They also especially loved the large back and side yards—the shop sat on nearly two and a half city lots.

Soon after, Debbie and Peter met with the owners to convince them to sell the shop to them instead of leasing it out, and explained their plans to convert it into a family home. In 2001, warehouse conversions were still a novel concept in Toronto. “They realized we were a young entrepreneurial couple,” says Peter. “They also thought we were a bit crazy.” Nonetheless, the owners sold it to them for $280,000, and even ponied up $80,000 to complete an environmental remediation on the brownfield site, which replaced the contaminated earth with three feet of clean soil. 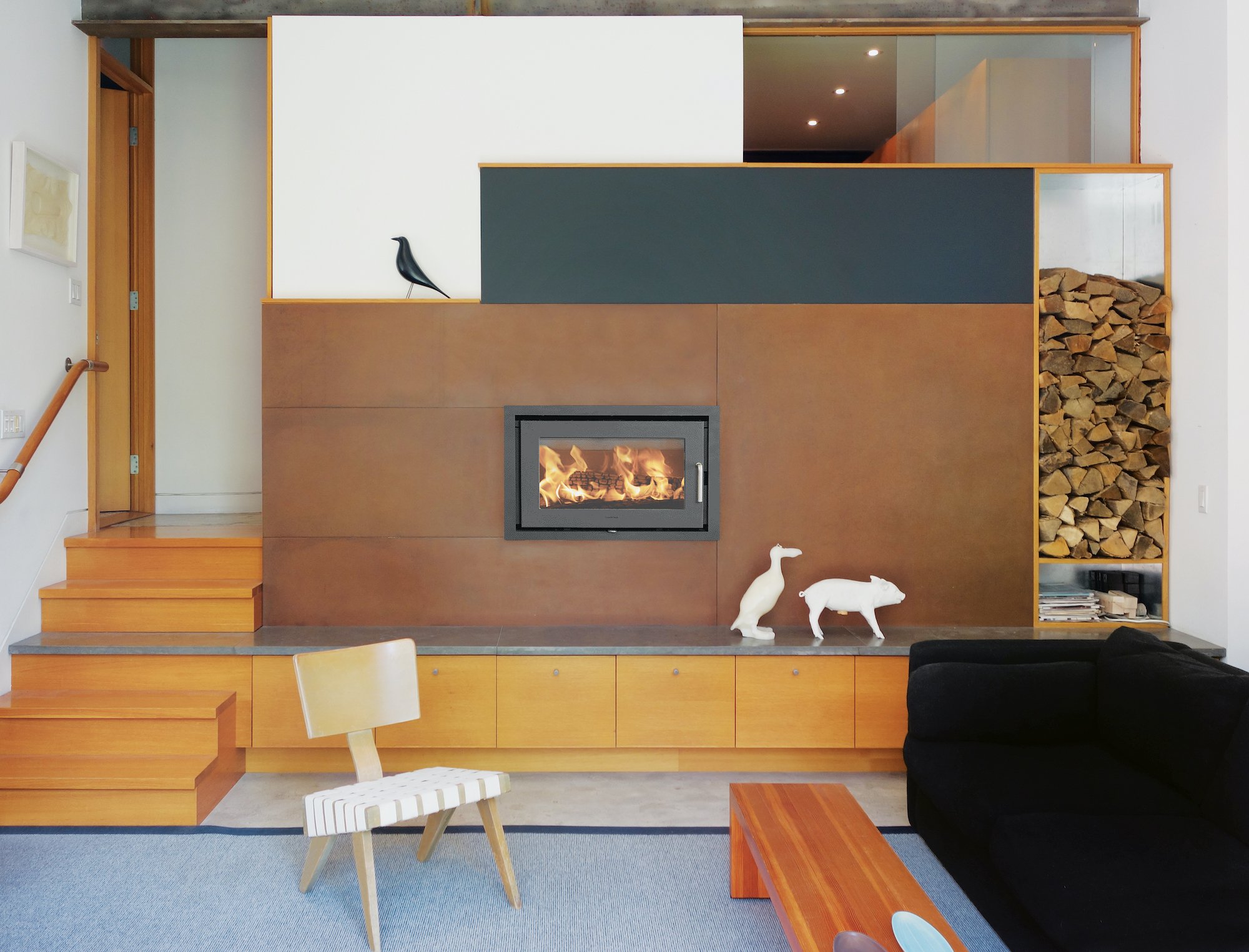 The shop was in a residential zone but taxed commercially, so Debbie and Peter applied for and received a permit to change the use. Next, they hired Janna Levitt and Samantha Scroggie of LGA Architectural Partners to convert the building. Peter collaborated on the design, constructing all of the built-in millwork in the building. “In total, we hired contractors for $550,000. My effort on top of that would have been worth another $150,000,” says Peter. “It’s hard to put a value on the conversion because of the sweat equity. Debbie and I did all the landscaping.”

The modernist, light-filled space, completed in 2002, is almost 3,000 square feet. The main floor features the kitchen, living and dining room, which opens to an oasis of a yard. The raised upstairs portion contains two bedrooms (the extra one is for guests), a library and two bathrooms.

The new backyard is two levels, and even though it backs onto a parking lot, it’s easy to feel like you’re in the country. It has a large paved patio area and a pond with a small waterfall and raised beds.

In the early months of the pandemic, Debbie and Peter missed entertaining. When the weather got better, they realized their backyard’s size was ideal for socially distanced outdoor gatherings—and so they decided to host a few small events for friends, including one for Christmas. To get into the spirit, they installed three fire pits, set up a used-book exchange, and served hot drinks and chili in the afternoon. “We lasted about four hours in the cold and it was a wonderful time,” says Debbie. If the variants are under control by December, they hope to host one again this year.

The exterior features a natural palette of stone and wood: 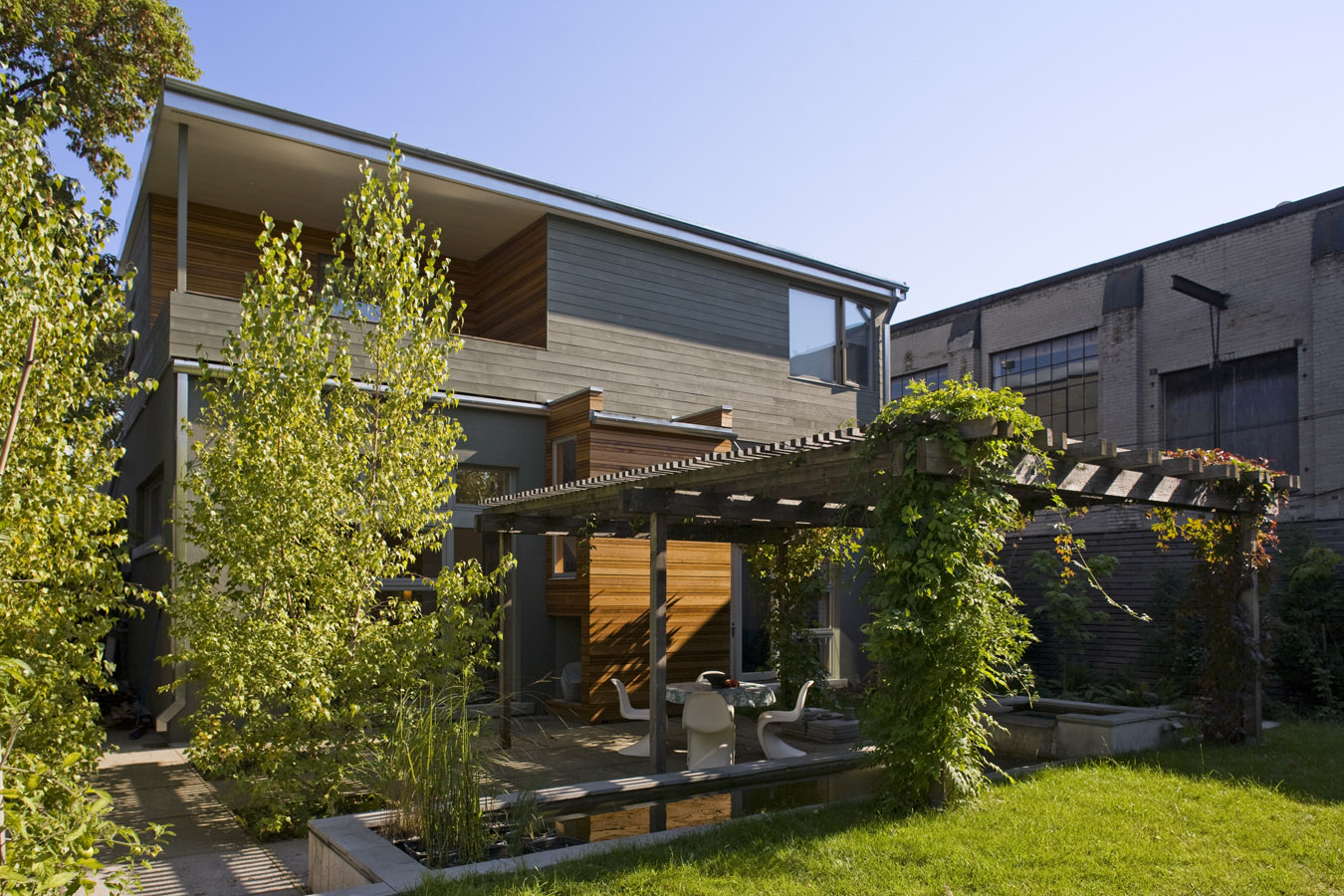 Plenty of west-facing natural light comes through the original clerestory windows and glass doors. The floor-length curtains keep the space cool in the summer: 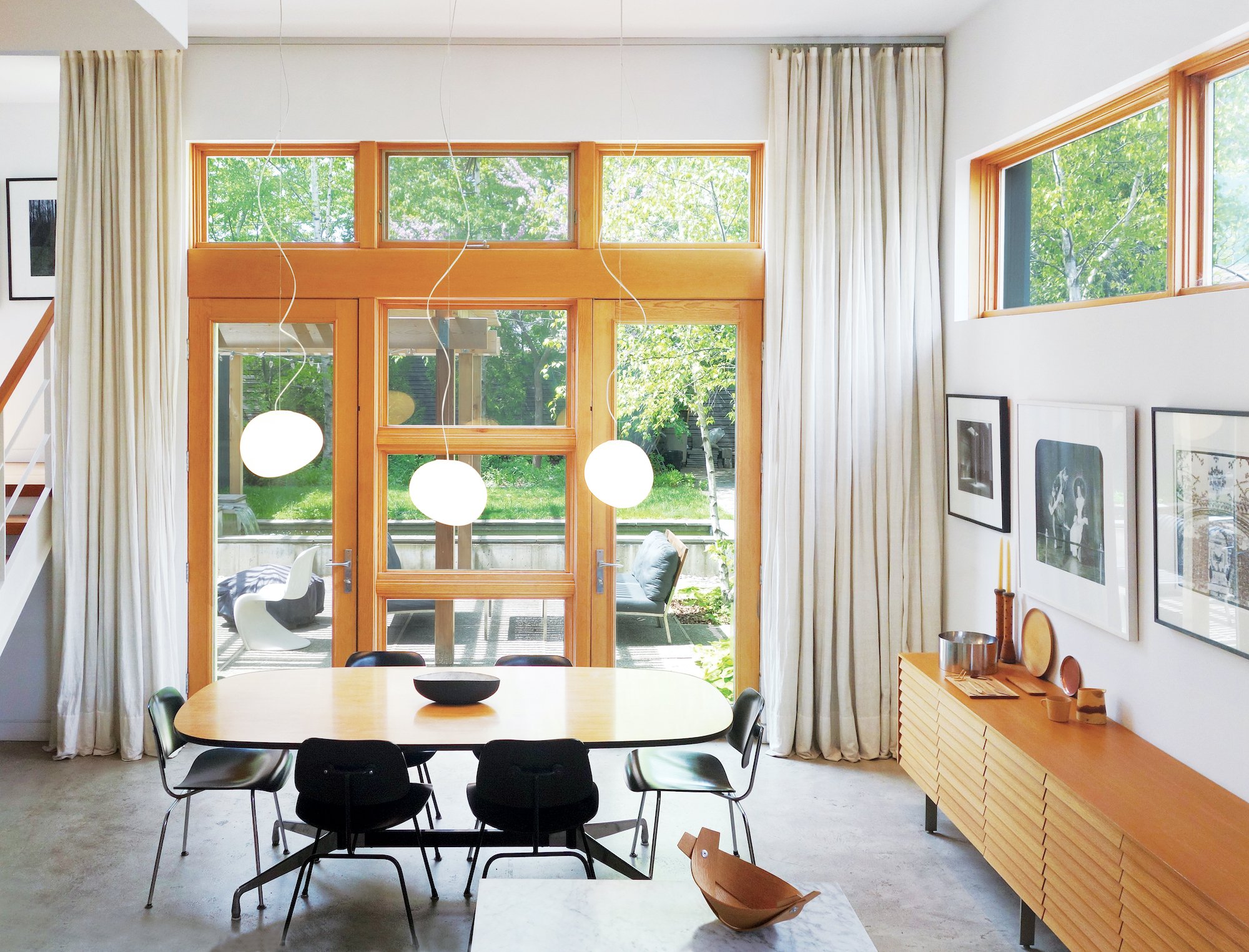 The main floor features a white oak kitchen and dining and living area. Debbie and Peter’s collection of artwork makes the space feel like a quirky art gallery (Debbie has a thing for flea-market finds): 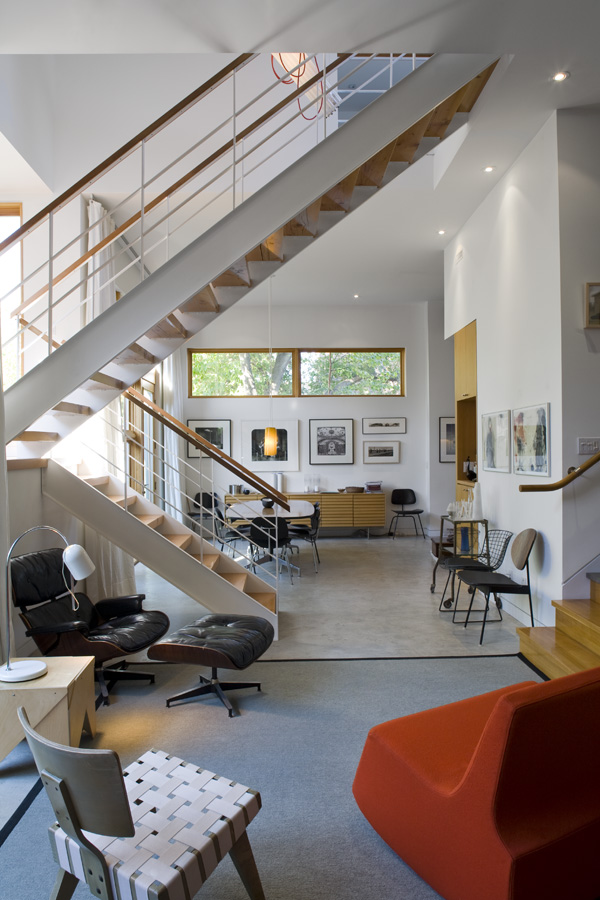 Debbie’s art includes this set of 1920s mannequins, a flea-market find, and her barbed wire collection: 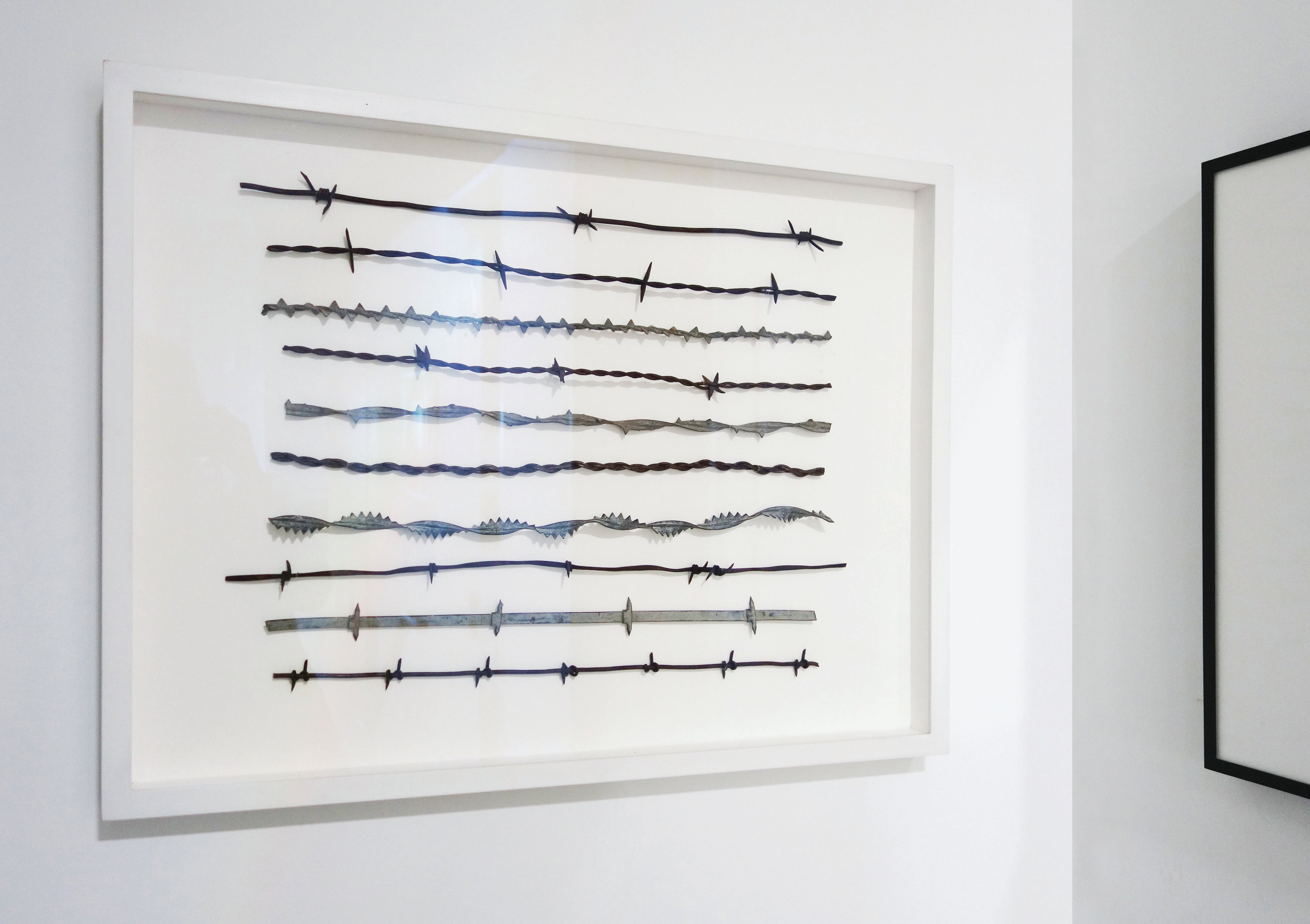 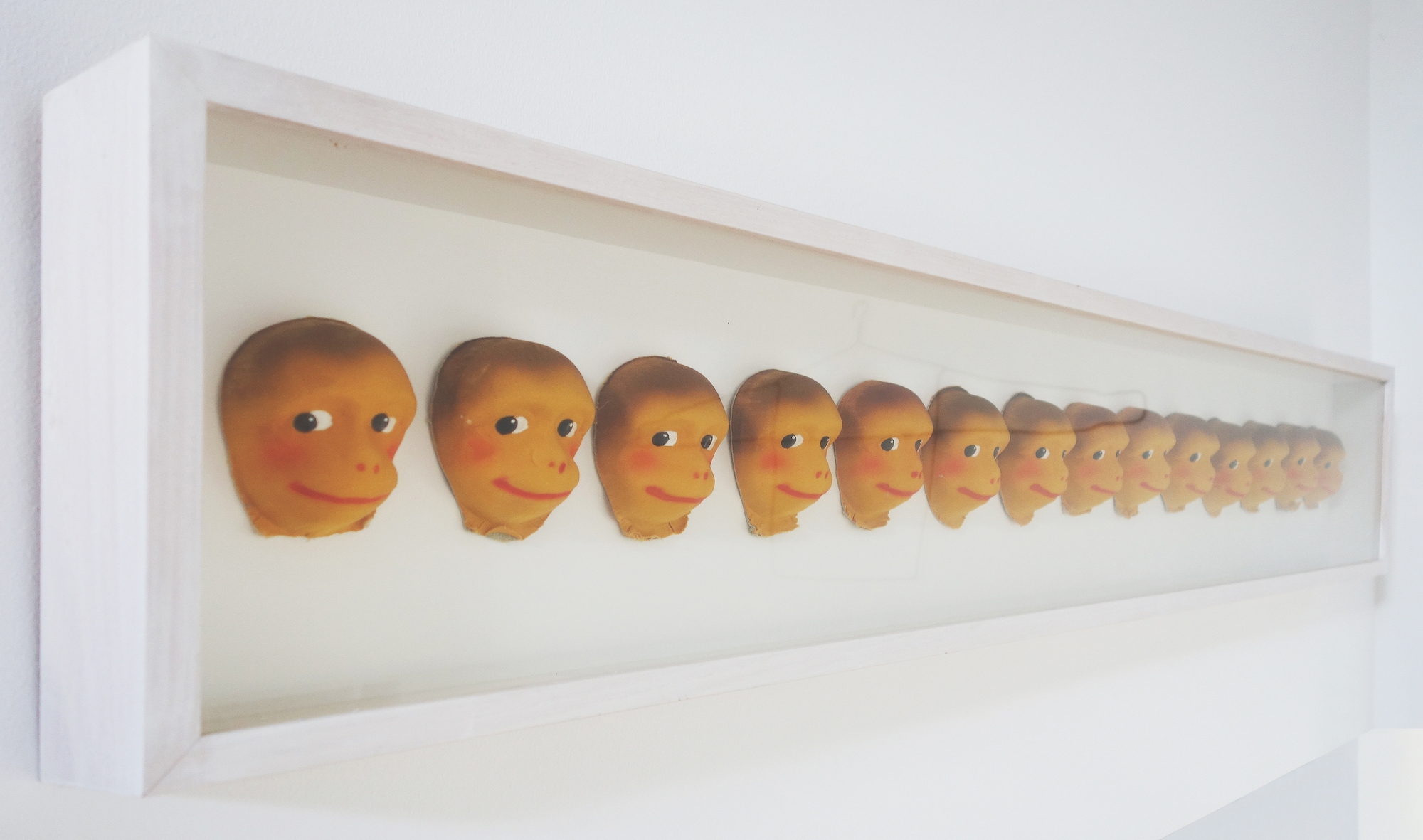 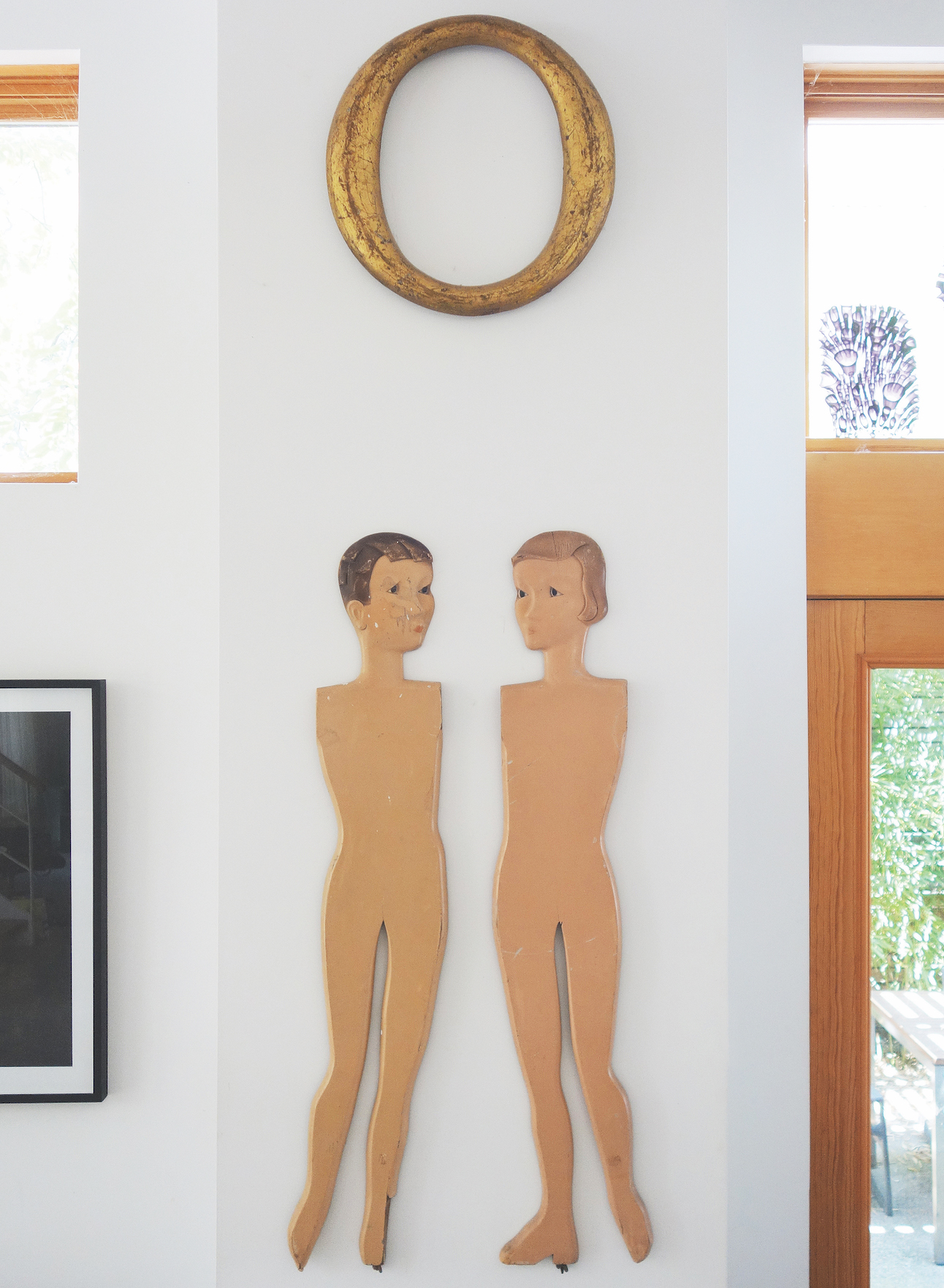 The kitchen has a wall oven, a pantry and a dishwasher. “The 12-foot-long kitchen island was not typical at the time,” says Debbie. “Now everyone has them”: 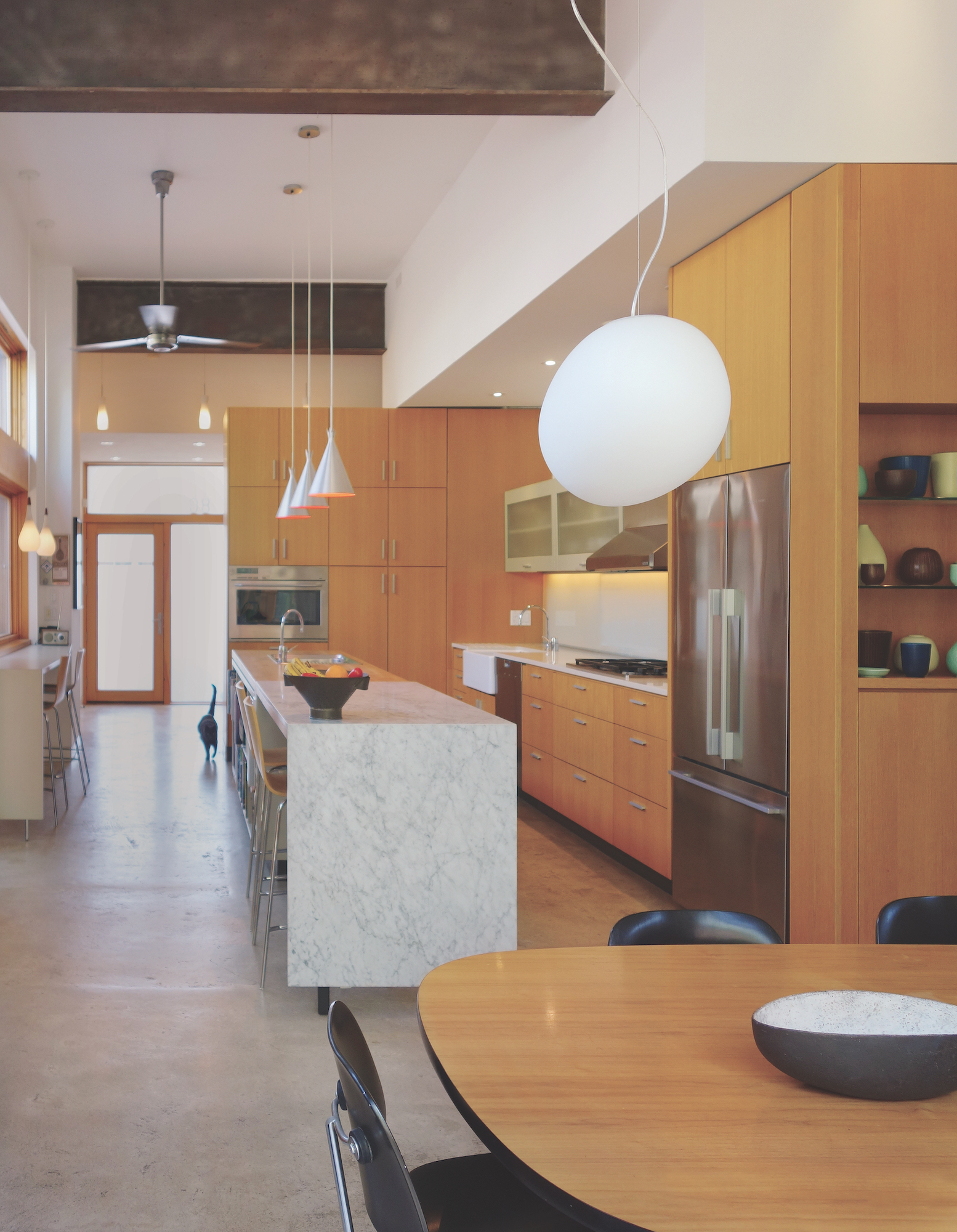 There’s in-floor heating on the first and second floors, and just one wall-mounted air-conditioning unit on the second floor. The large stair-opening allows cool air to travel to the lower level. “We’re not A.C. people,” says Debbie. “We only turn on if it gets extreme. I’m cognizant of our environmental footprint”: 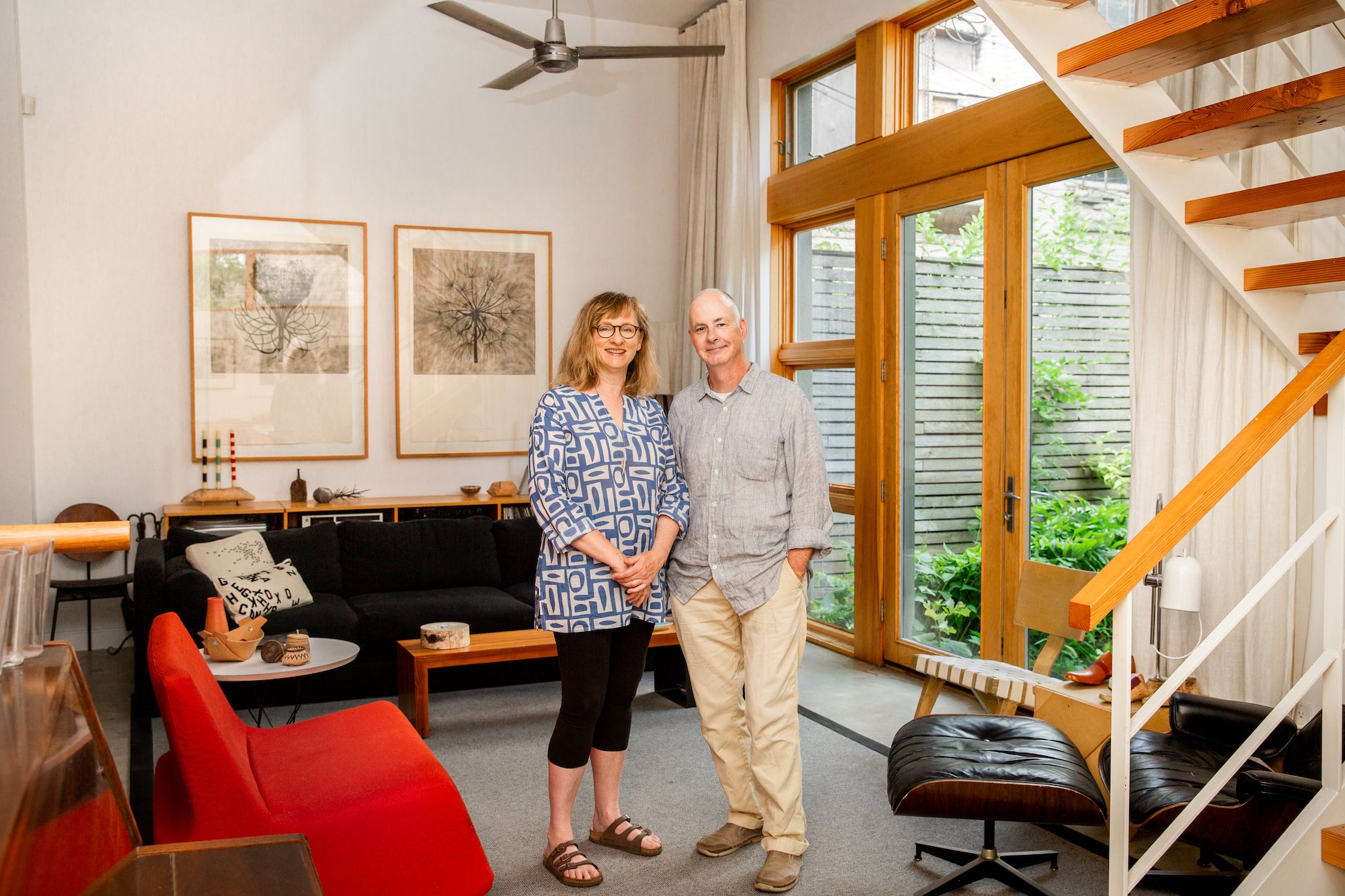 Peter made this pivoting door that closes the bedroom off from the living room: 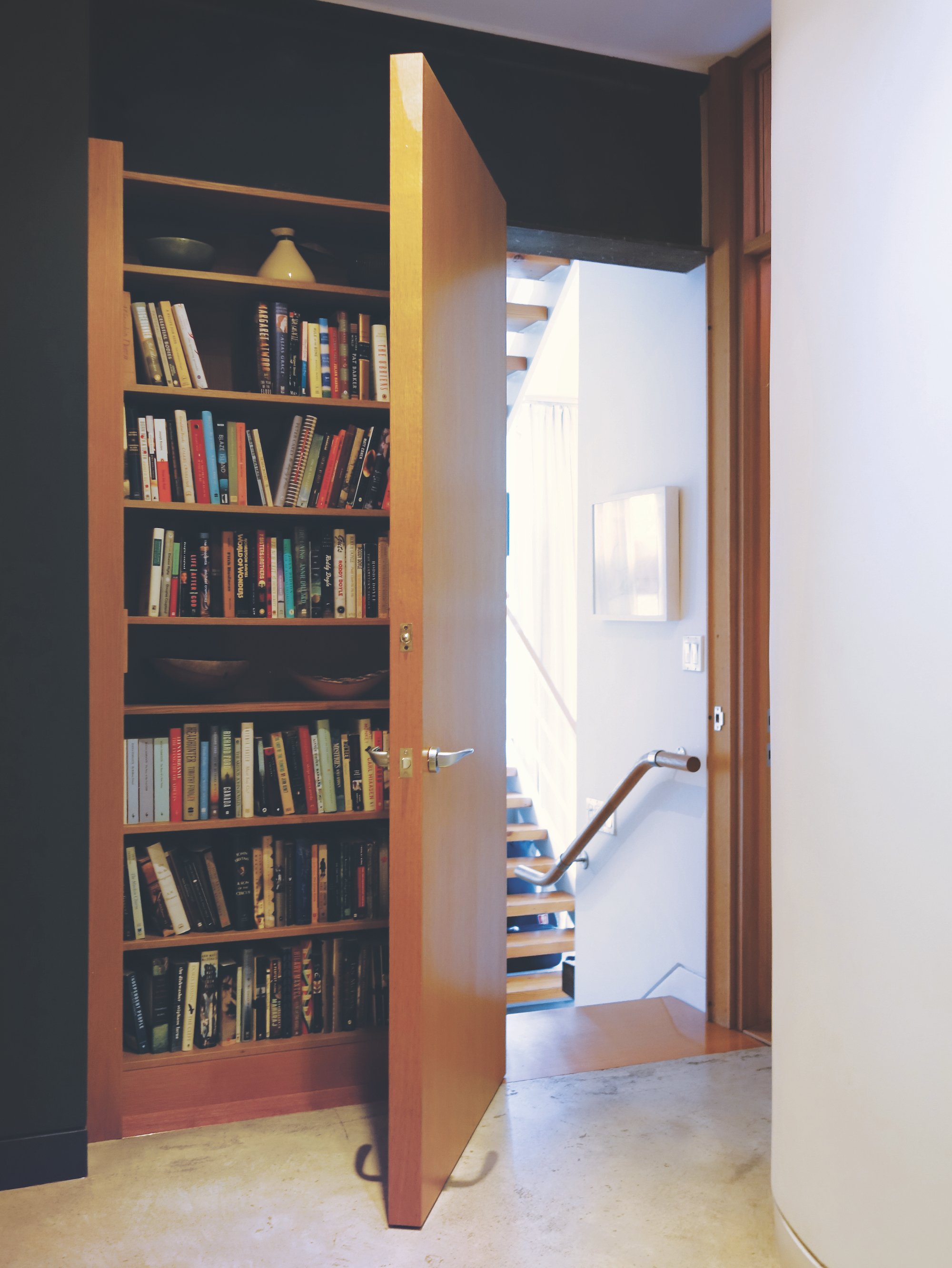 They raised the bedroom areas and lowered the ceiling height to 10 feet to create more intimate spaces: 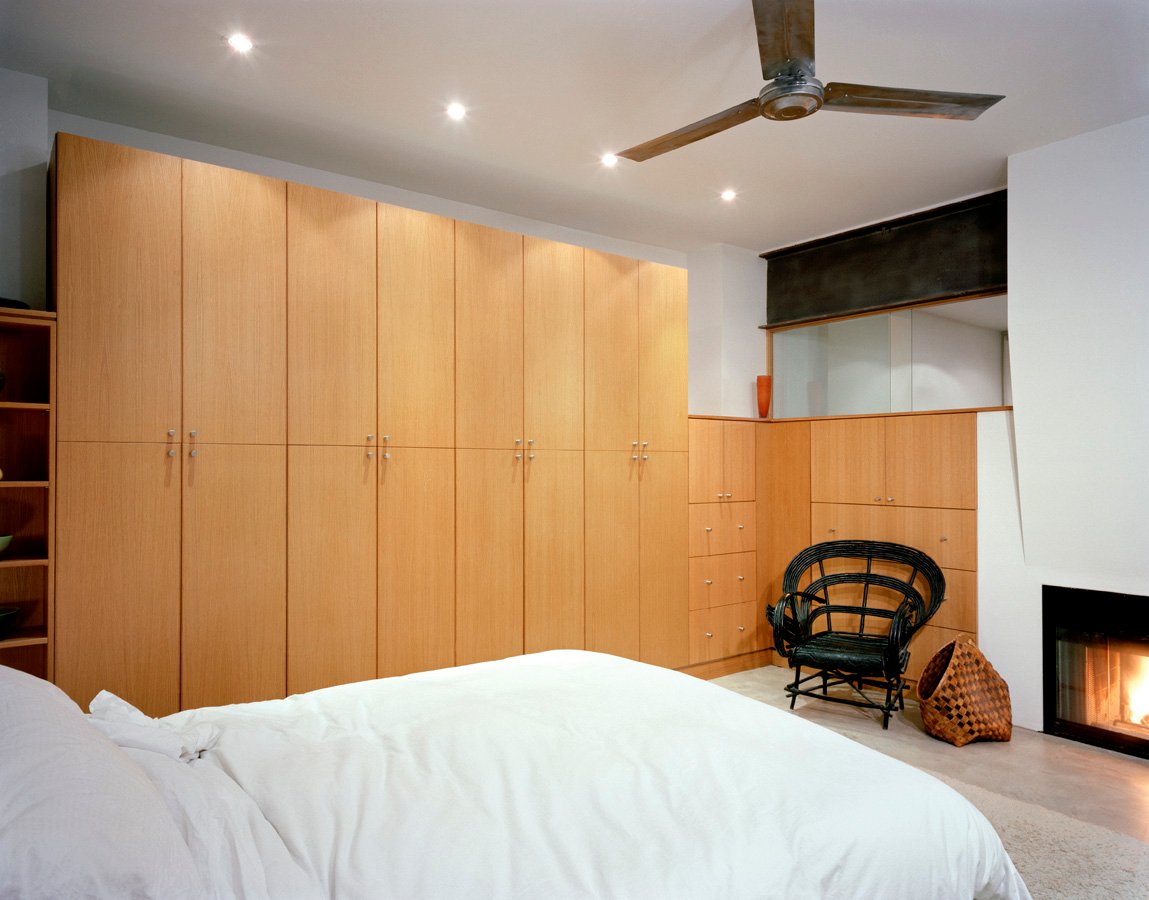 In 2008, Debbie and Peter added a second-floor open studio to be used as a work space. “I run my business out of part of it. Peter has his home office for teaching, so there’s a 900-square-foot flexible office space,” says Debbie: 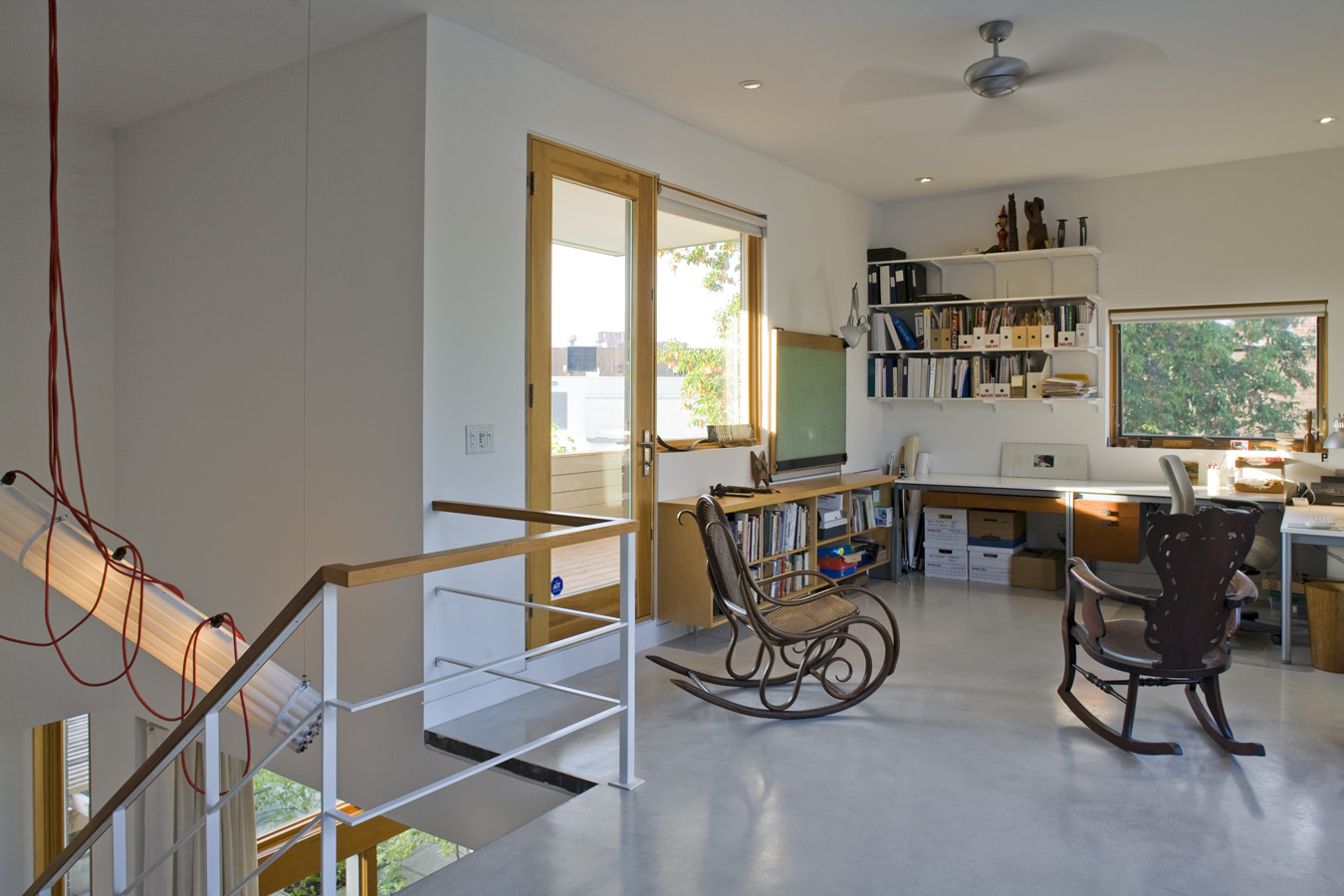 Peter built the concrete tub in the bathroom on-site. It was cast upside down, and wheeled into position and turned over. Then, they built the wall around it: 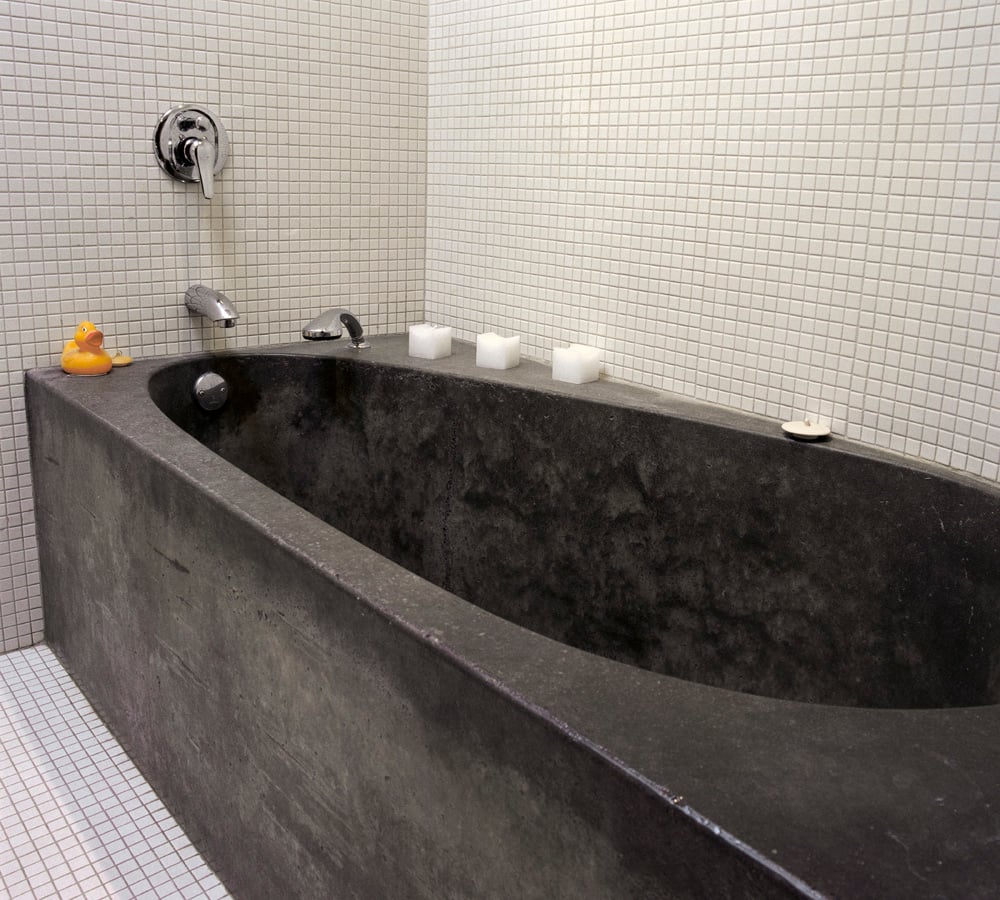 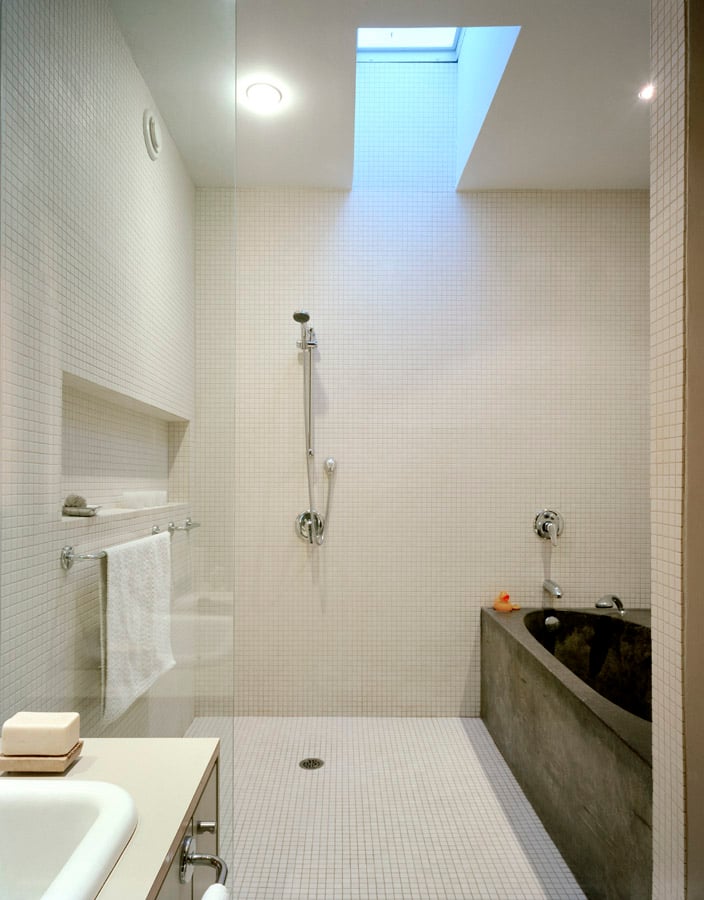 Debbie and Peter rebuilt the pergola last year and added mostly native plants, like wood-poppy and Solomon’s seal. “Because the backyard backs onto a retail space, the city allows for an eight-foot fence,” says Debbie. “It’s over-planted with trees—it’s a forest. It was empty when we bought it, but things grew remarkably well”: 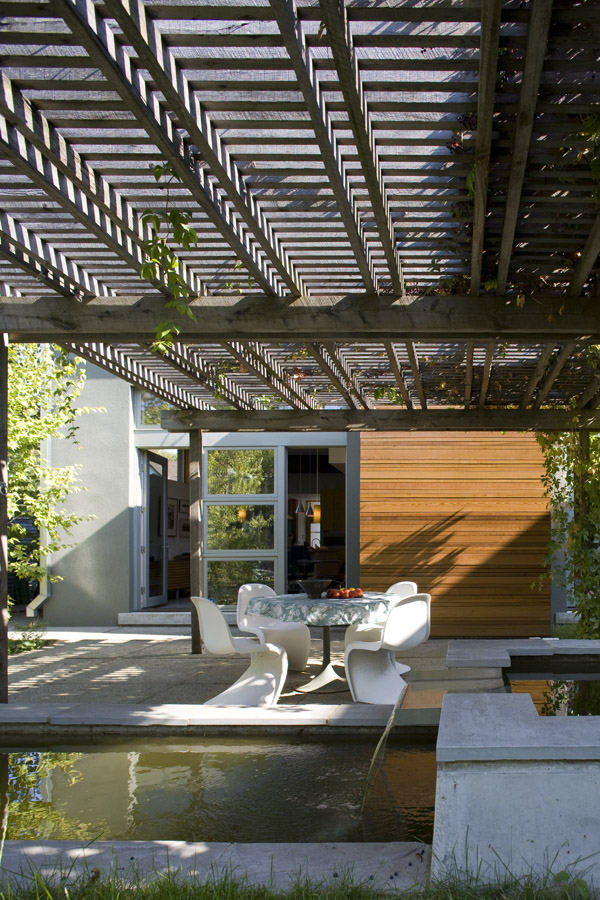 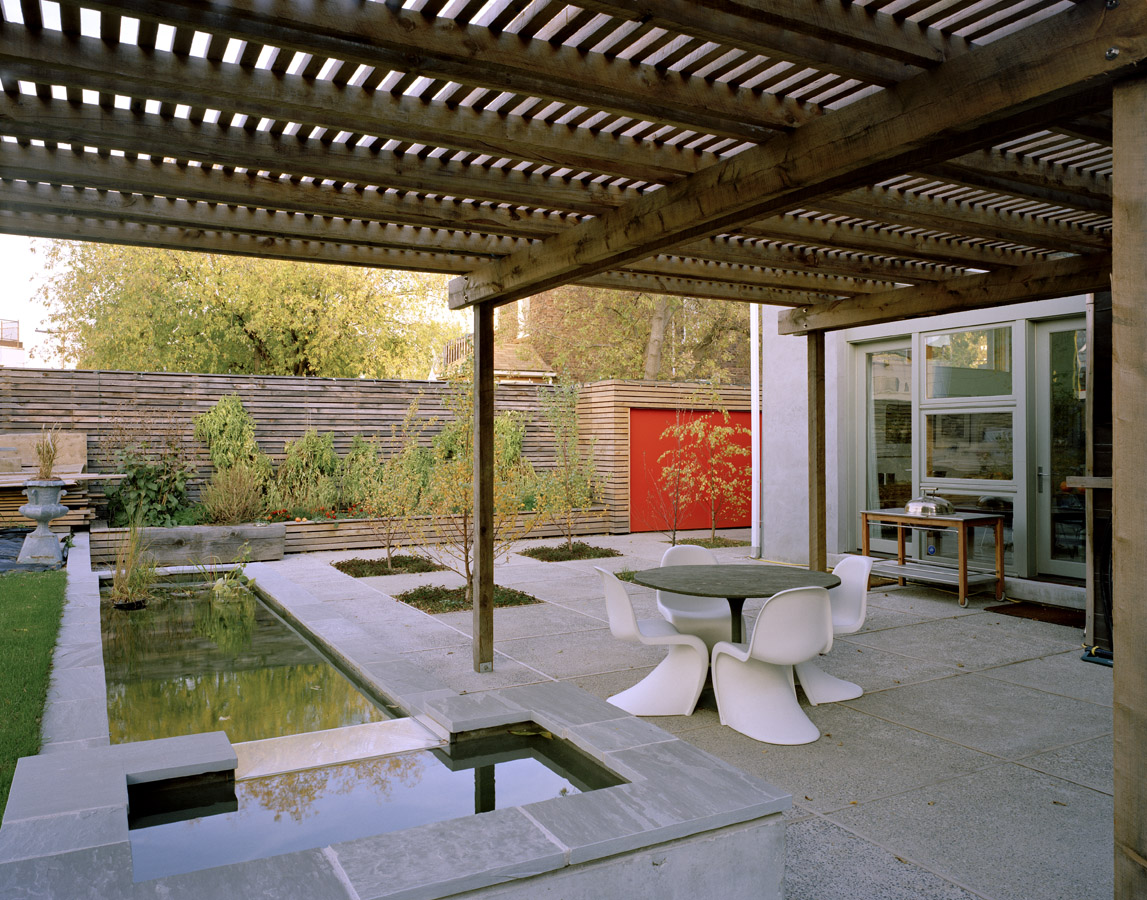