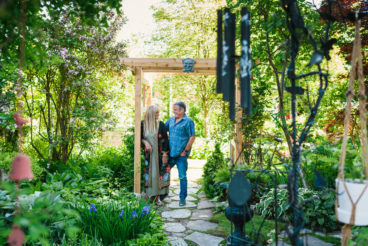 Joanna Shanks-Taman, a retired florist, was born into a family of enthusiastic horticulturists who emigrated from England to Pickering when she was 11. She has always transformed her outdoor spaces (no matter how small) into verdant oases. During the 11 years she lived in a Scarborough apartment, she grew flowers, tomatoes, beans and peppers on its 60-square-foot balcony.

When she and her husband, Scott Taman, a former ship captain at the Royal Canadian Yacht Club, first toured their century-old two-storey in Birch Cliff more than two decades ago, she swooned over the nearly half-acre lot. The yard consisted of an open field with a lone maple tree. “It was the perfect blank canvas,” she says.

During her first years at the house, in the early aughts, when finances were tighter, she would buy all her plants on sale at the end of the season and go on long walks in the country to bring home Ontario wildflowers and other perennials. Over the years, she added elements to the garden bit by bit—a new collection of flora, a scrap tricycle, a garden gnome—as the inspiration struck.

Ten years ago she added a pond in the sunny section of the garden, which attracts cardinals and sparrows, as well as dragonflies and other not-so-welcome wildlife like raccoons. An area of Japanese maple and rowan trees have matured into a shaded woodland, where she grows her main passion, hostas, which she’s been collecting for 25 years.

It’s a true labour of love: on a typical summer day, Joanna will spend at least four hours working in her garden, clearing out undergrowth, mulching leaves, pruning trees and plucking out an endless array of weeds.

This past spring, she avoided the garden centres—Scott is immunocompromised, so they aren’t going out much—and is instead building her garden with existing seeds and trades with neighbours. Scott’s favourite part of the garden is the gazebo, which sits under a maple tree and is surrounded by the shade garden where he likes to listen to music and read. It’s the coolest place to sit in the summer, and the couple eat lunch there most days.

In pre-Covid times, she and Scott used to show off their garden with an annual Canada Day bash for dozens of neighbours and acquaintances. This summer, they’re settling for distanced hangs with a few select family and friends. They find that these safe catch-ups in their blossoming backyard paradise are one of the biggest things keeping them sane.

There are three main areas of the yard: the shade garden near the house, the sunny middle with the pond and raised beds full of annuals and vegetables, and the shed and utility area. Many of the plants—including the Egyptian walking onions, lovage and masses of forget-me-nots—came from Joanna’s late father’s garden in Orillia: 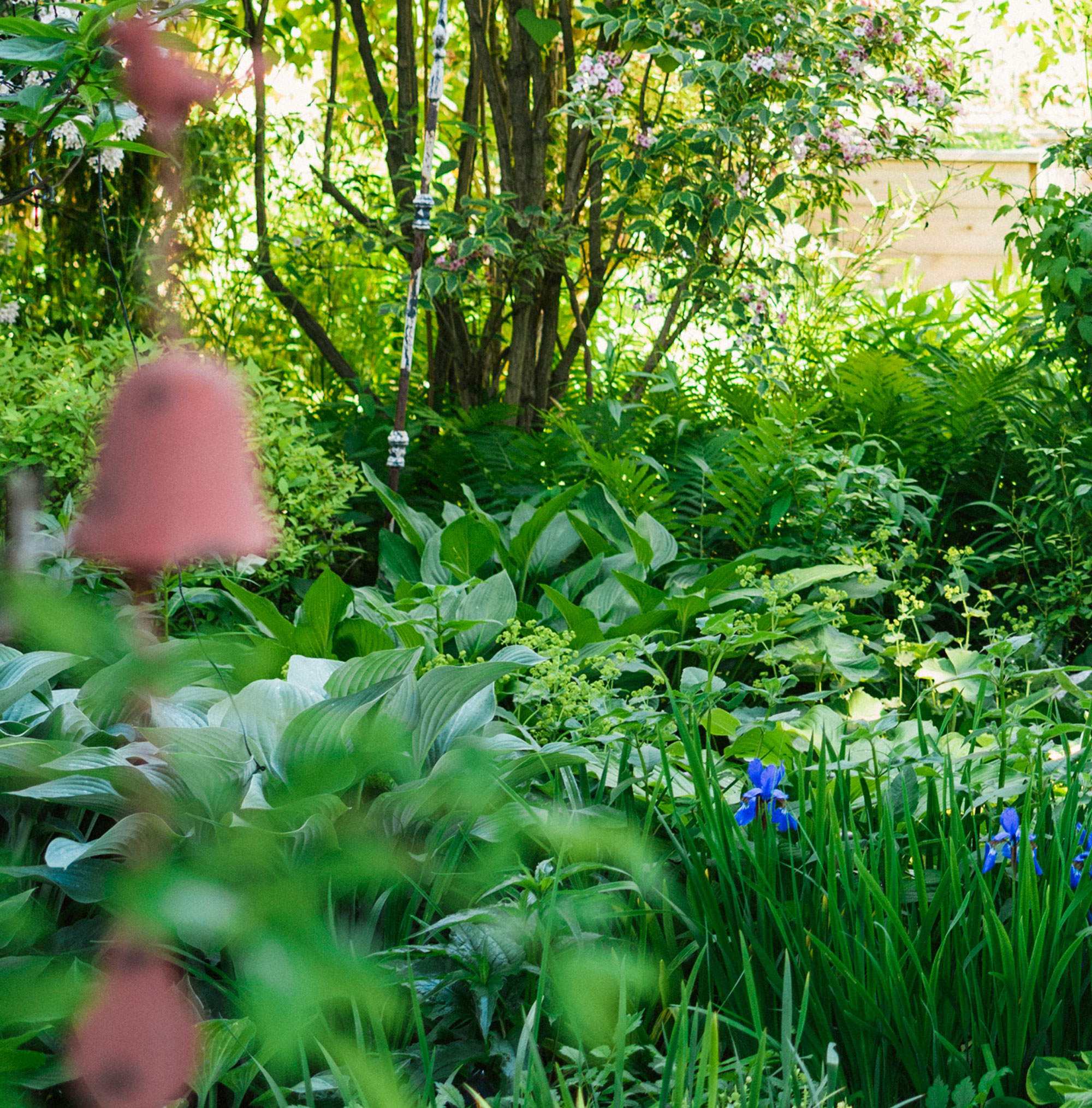 The back half of the garden, which gets full sun, is where Joanna grows perennials like daylilies, irises, wildflowers and poppies. “They’re cost-effective,” she says, “and more interesting to design with”: 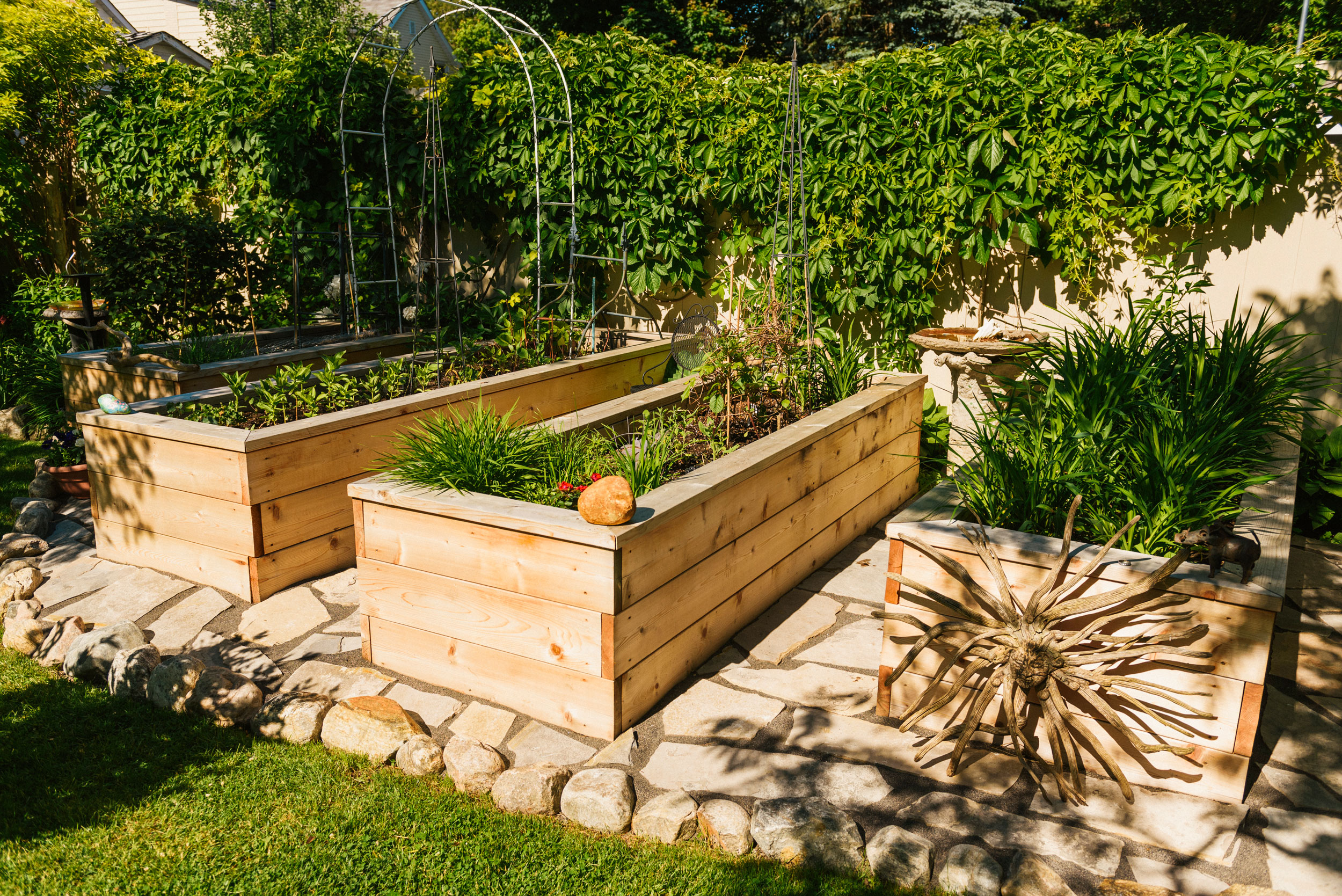 Her favourite hosta varieties are June hostas, with heart-shaped bluish-green leaves, and the large-leafed big daddies. “They’re so prolific, with different shades of green and various textures and thicknesses, that I almost feel like I paint with them,” says Joanna. 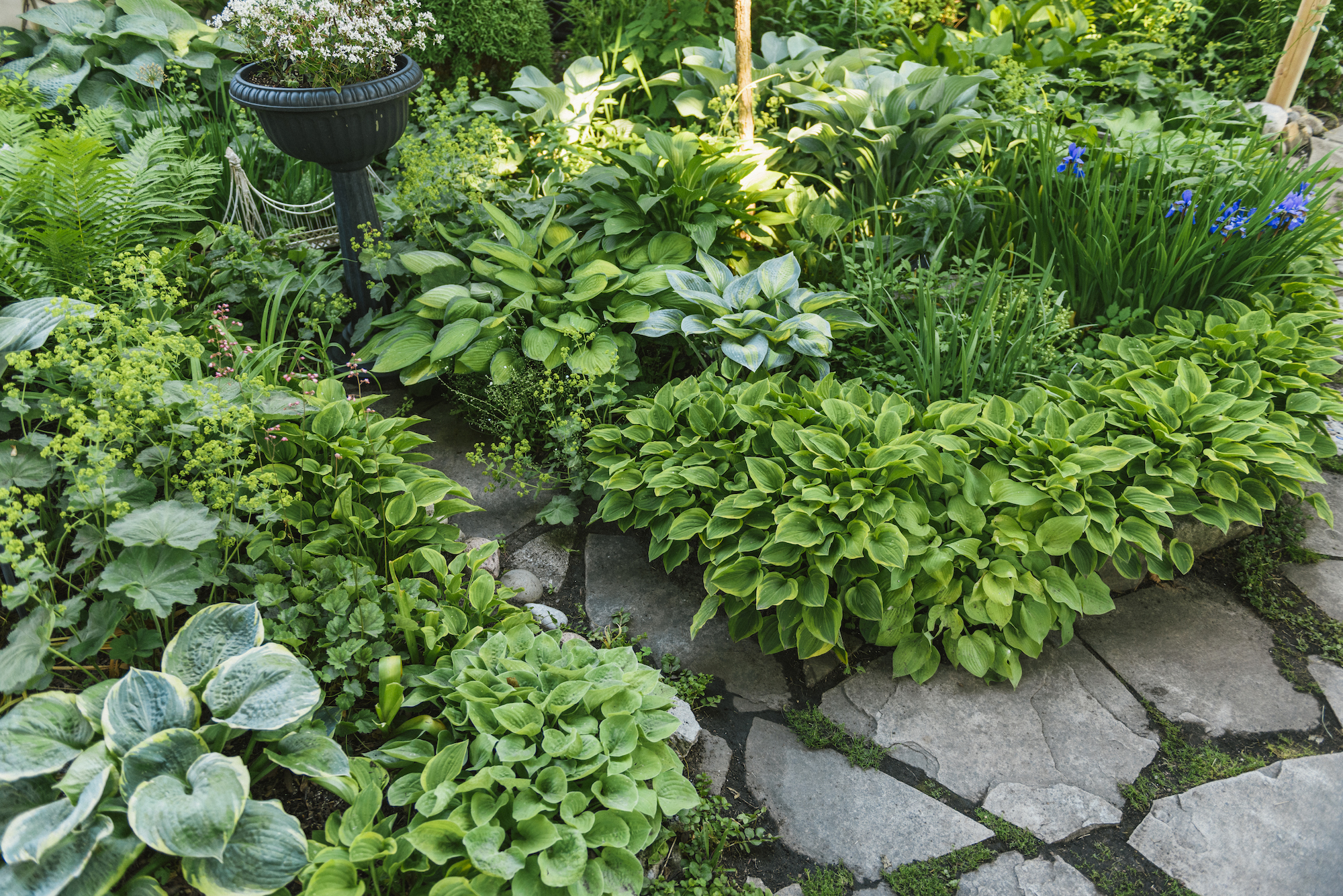 Over the years, Joanna has added interesting little conversation pieces, like this miniature garden gnome in a shoe planter: 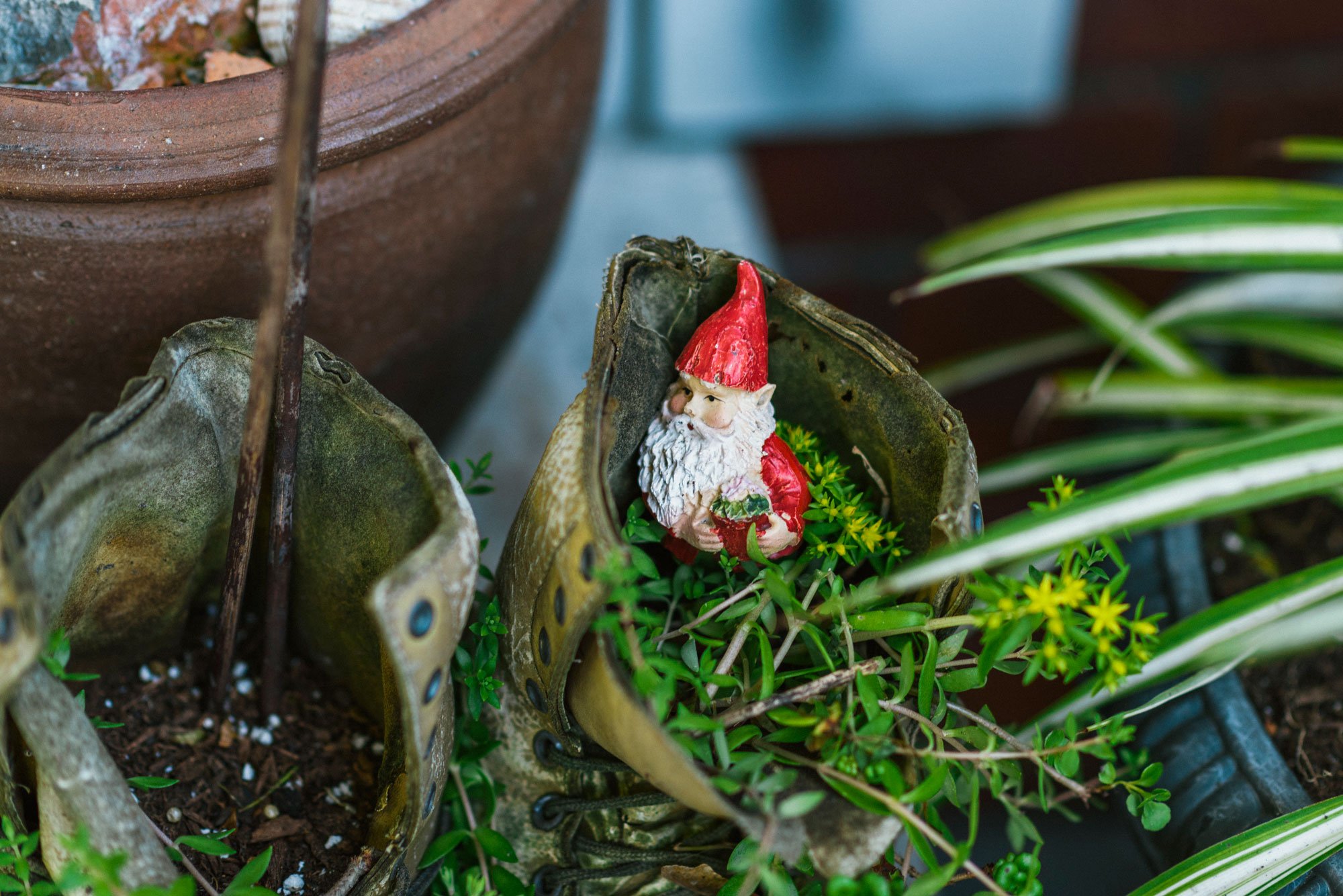 And this abandoned bird cage: 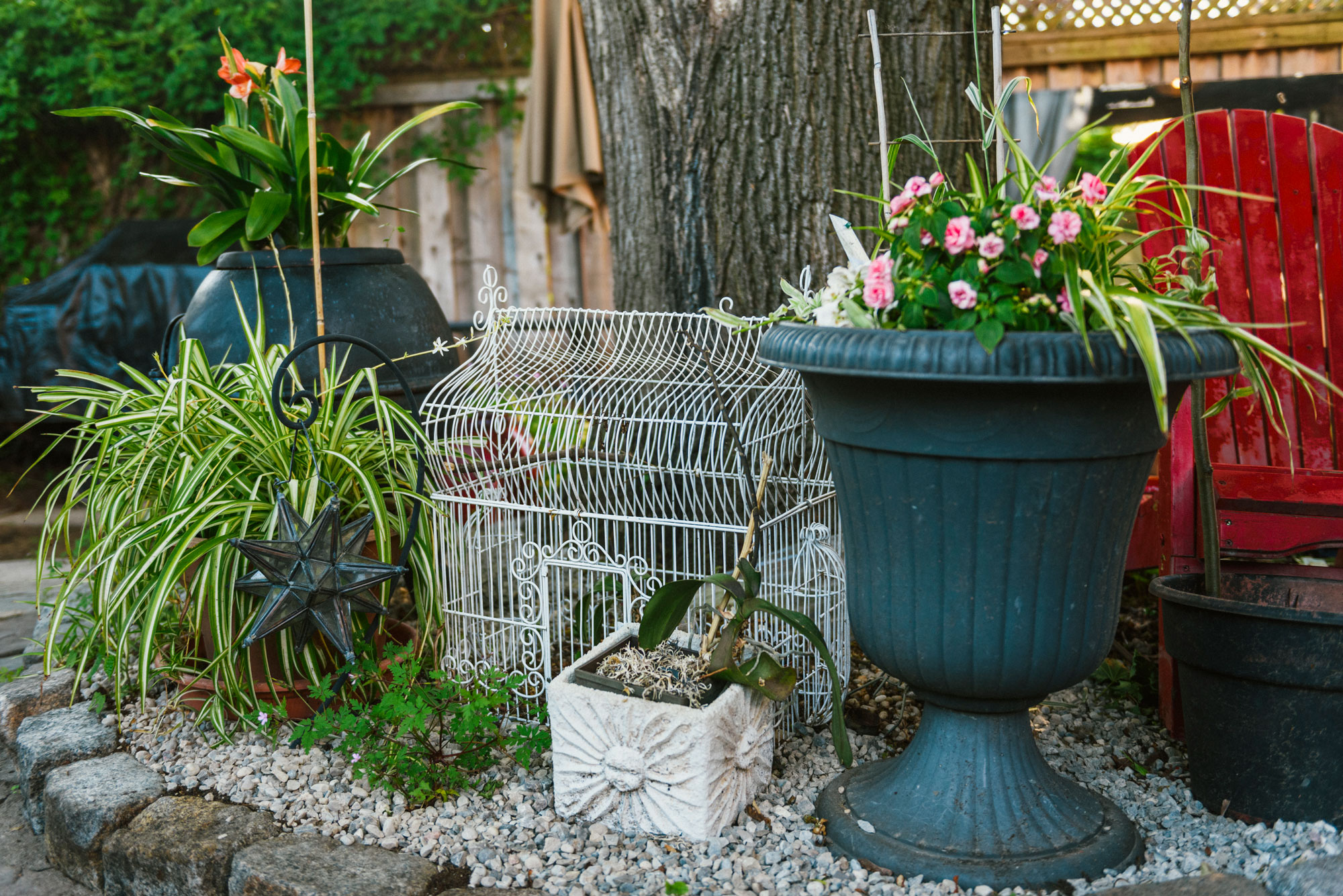 Joanna’s nephew found the scrap adult tricycle on the Toronto Island. She spray-painted it black and added a couple of flower baskets: 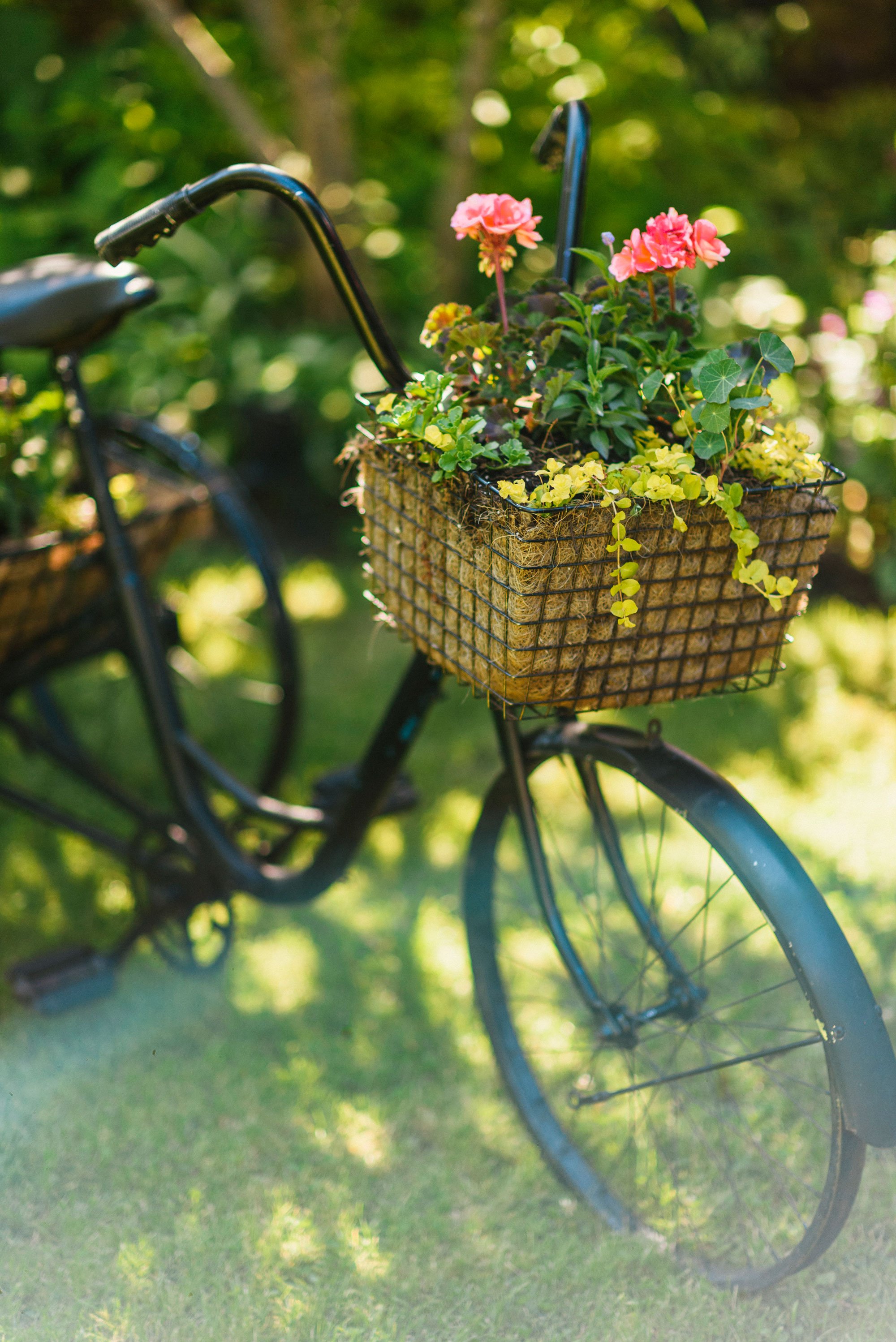 Scott built the stone patio around 15 years ago: 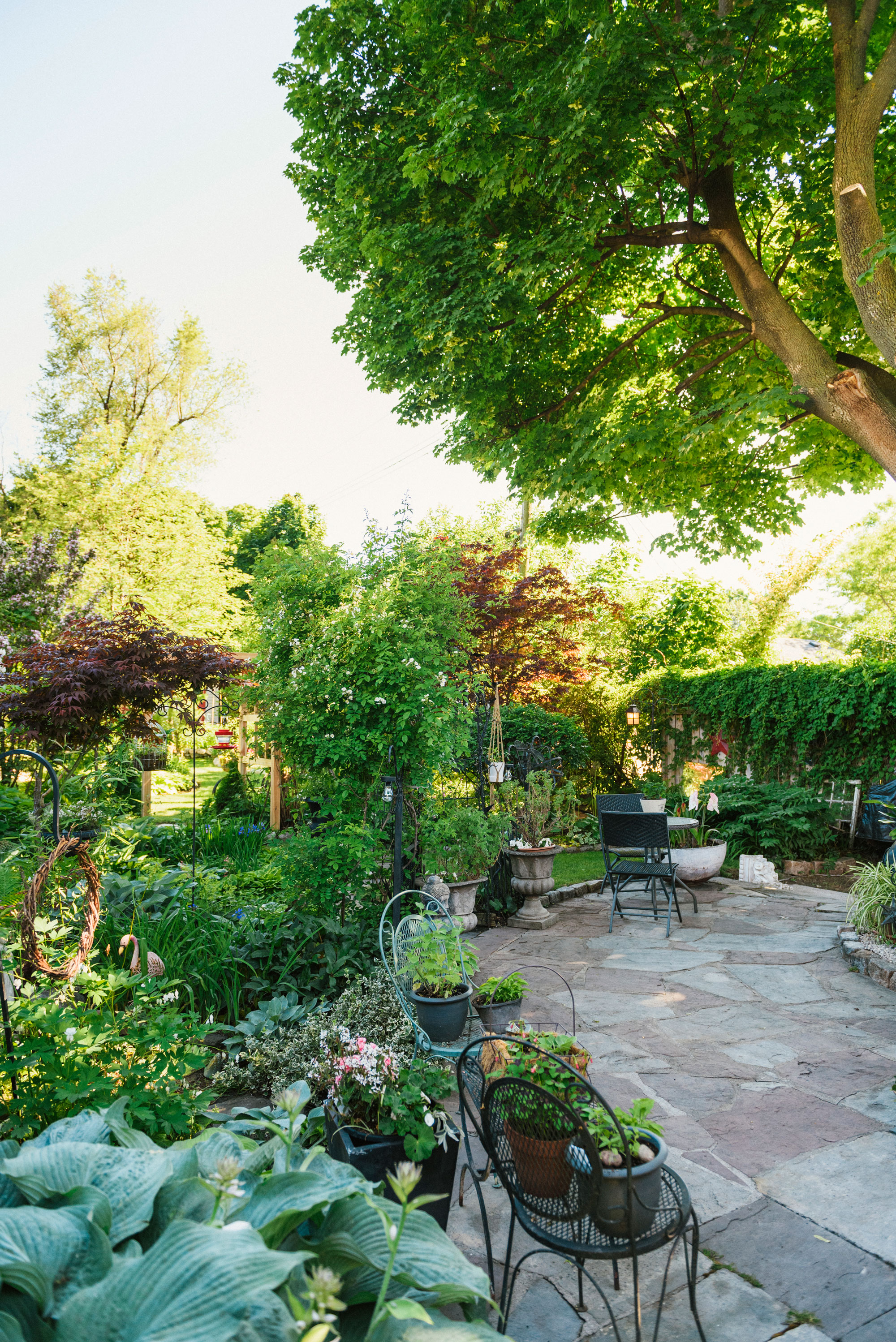 The pond used to be home to a few koi fish, but a mink came and ate them all a few years ago. After waiting to ensure the mink wouldn’t return, Joanna recently dropped in 15 goldfish and a koi. So far so good: 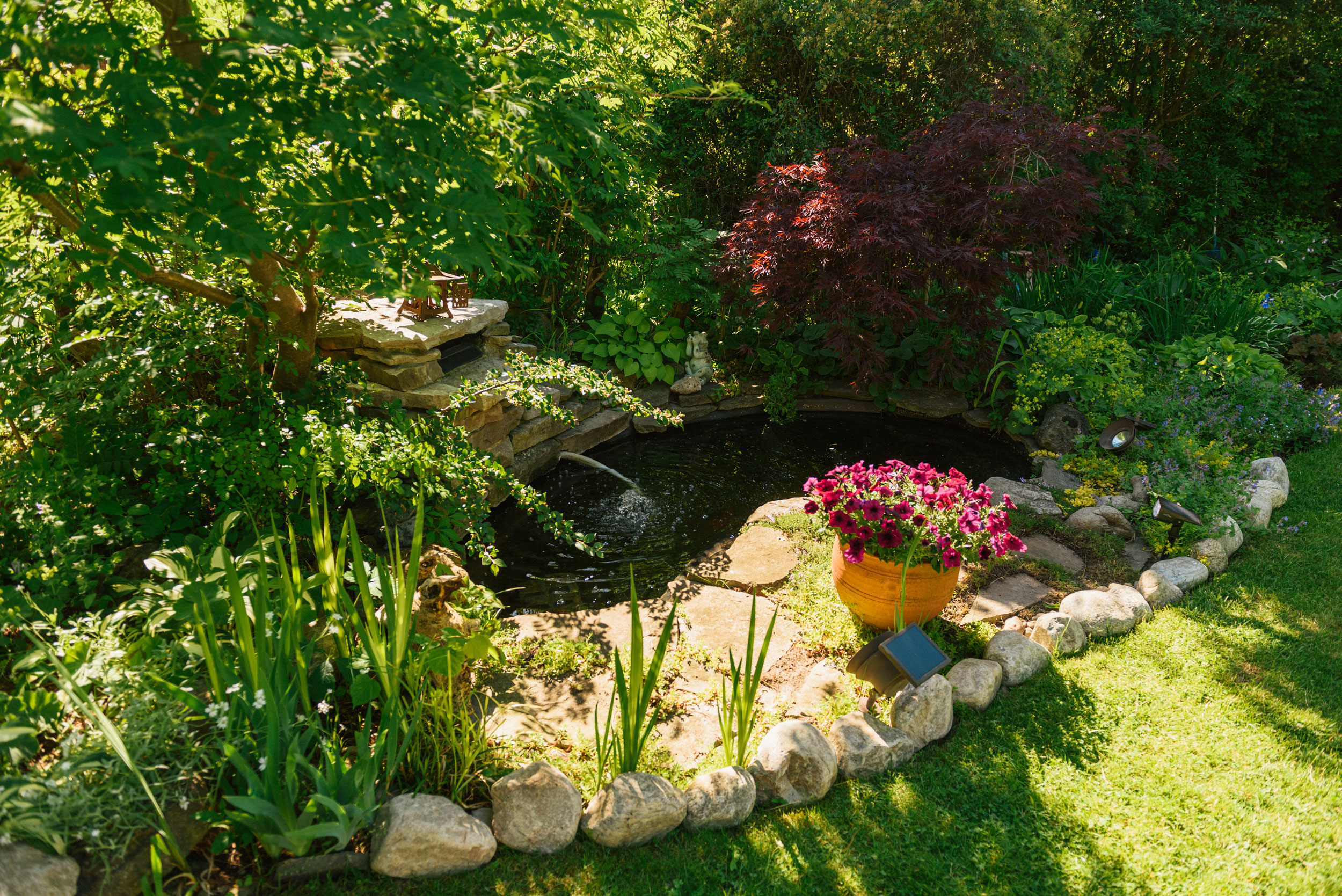 The garden has lots of cool iron features, like a vine-covered arbour and a bird-like figurine, which were made by Joanna’s blacksmith brother, Richard Shanks: 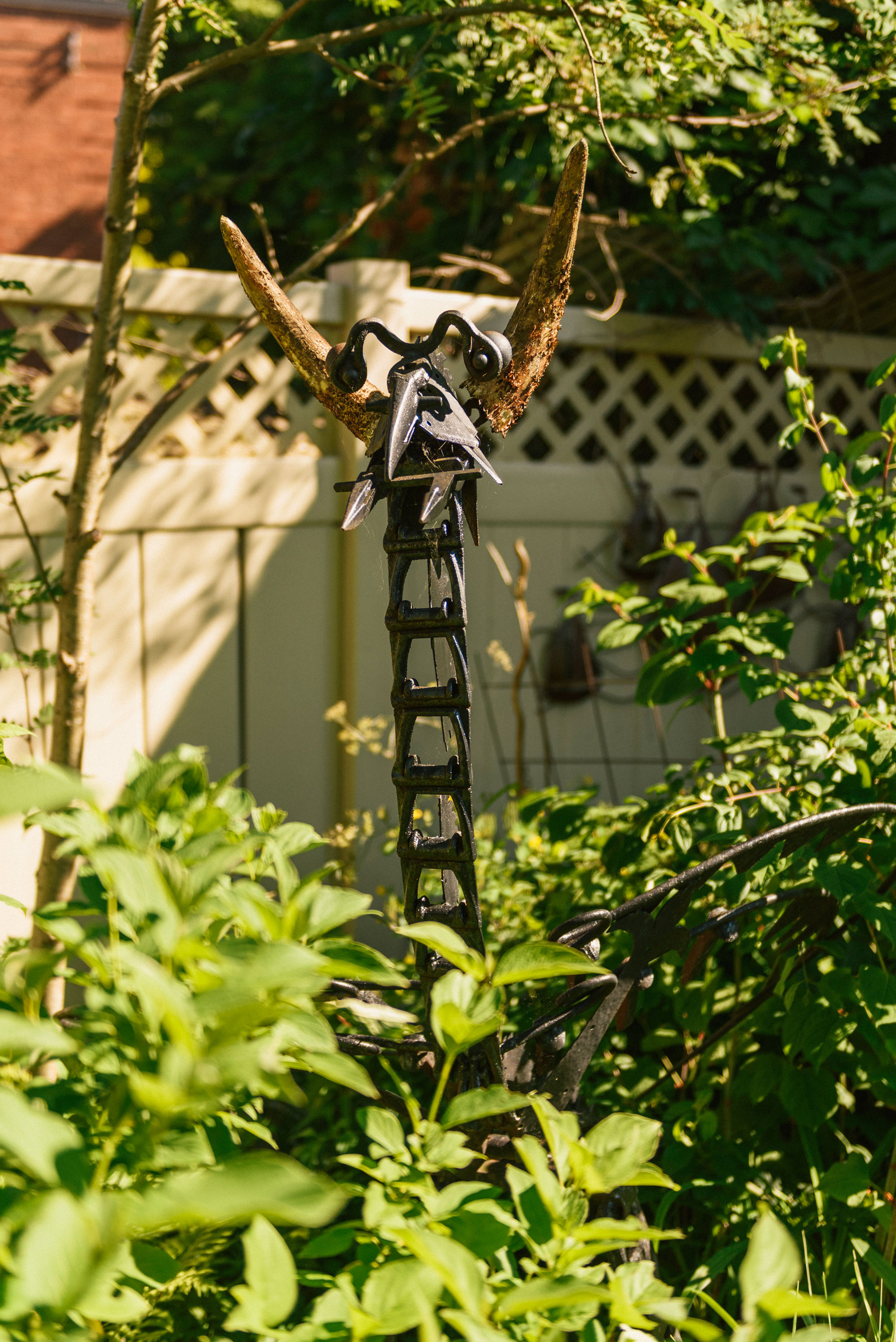 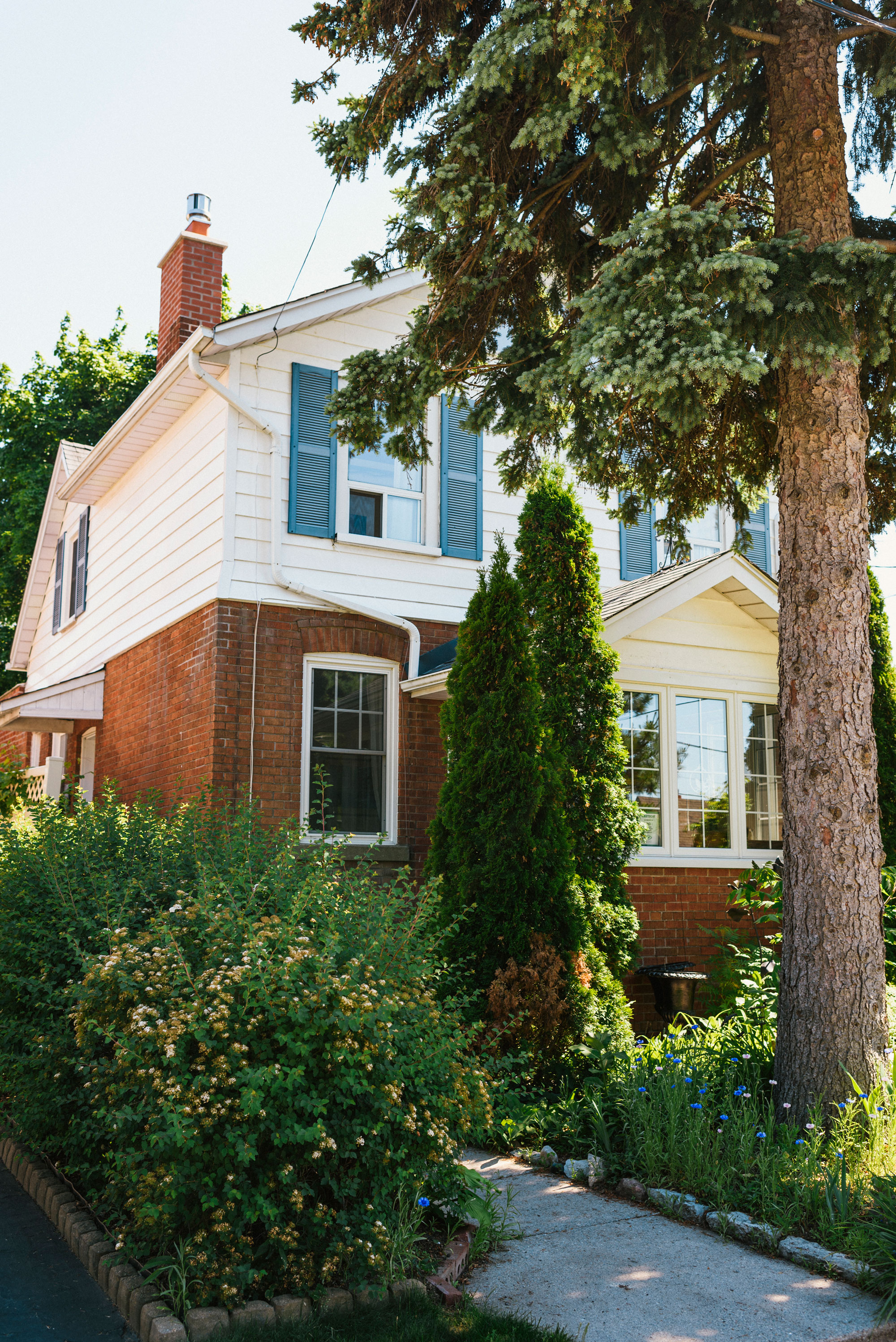