This actor pays $700 a month for an apartment in Parkdale, but it’s only 184 square feet. How does he make it work?

This actor pays $700 a month for an apartment in Parkdale, but it’s only 184 square feet. How does he make it work?

Who: Wayne Burns, an actor and filmmaker

The backstory: Burns, who’s originally from Truro, Nova Scotia, graduated from Montreal’s National Theatre School in 2014. That spring, he moved to Toronto to work in the film industry and found a 184-square-foot apartment in Parkdale for just $630 a month.

“As an actor and filmmaker, I have periods of lots of work and then very little, so it was important and fiscally responsible to have an apartment I could afford, in even the worst situation,” says Burns.

He plopped a queen-size bed in the living room; stored his belongings in tubs underneath the bed; hung clothing on an exposed piping system; and stuffed his trove of 1980s records into a trunk, using wall ledges to display some of the vinyl.

Burns officially had a crash pad and started working in his new hometown—auditioning, working gigs and waiting tables.

When the pandemic hit, he felt claustrophobic, stuck inside his tiny unit for most of the day, his queen-sized bed taking up too much space in the middle of the room.

Burns considered moving to Halifax to score a bigger place. During a trip home in the winter of 2020, his mom changed his mind, insisting he should spruce up his pad and stay in Toronto.

“She is a huge advocate of making your home zen, and where you want to be,” says Burns. “When I was a kid, on Sundays we would go to open houses and steal interior design ideas then brainstorm how to incorporate them.”

So he purged some items and started fresh. He sold his entire record collection to Sonic Boom for $400, snagged a sleeper West Elm sofa from Facebook Marketplace for $700 (originally $4,500).

“The couch was the first step in the transformation,” says Burns, who recruited designer Khadija Pennant of I.D. My Designs, at a rate of $1.50 per square foot, to realize the vision.

“My inspiration was the ’80s. It’s a little bit American Psycho with a conscience,” he says, referring to Patrick Bateman’s stark and slick apartment in the film, with its black-and-white palette.

With rent currently at $700, Burns is smitten with his shipshape micro pad. “I felt so much anxiety and chaos energy before the organization,” he says. “I would sit on my bed and there was nowhere to go. Now everything has a place and it only takes 15 minutes to put things away.”

Here’s the entrance. Burns clocks a few hours a day at the ergonomic standing Lifelong desk. The bar-high cart with stowable seats is from Wayfair. 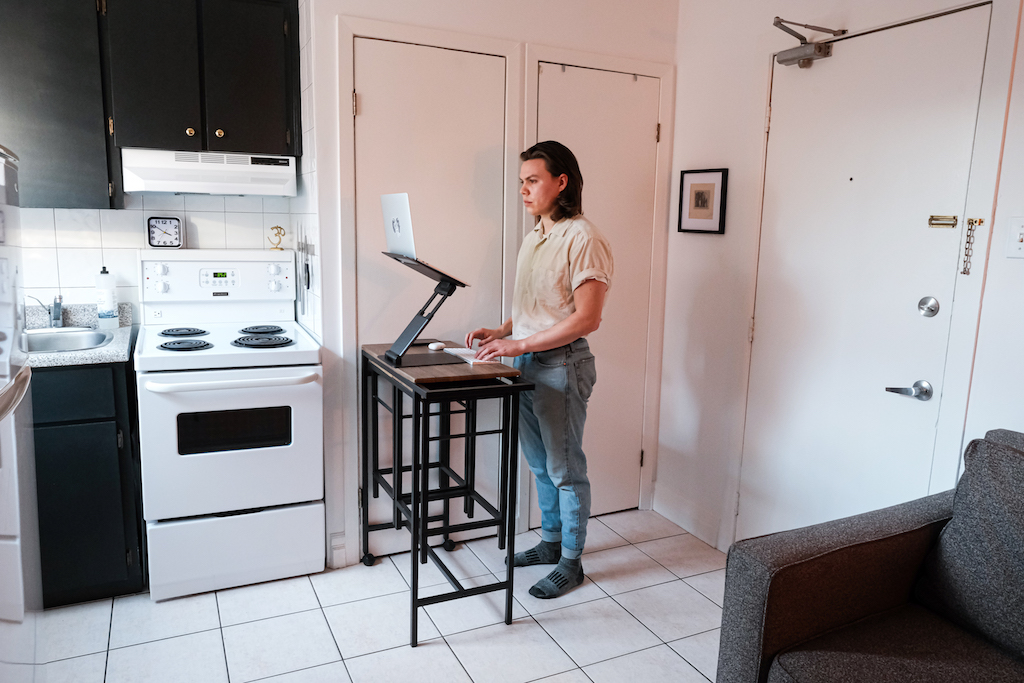 Burns received this sketch, wedged right beside the front door, as a gift. His friend, a flamenco dancer, brought it back for him from Spain. “She said it reminded her of me.” 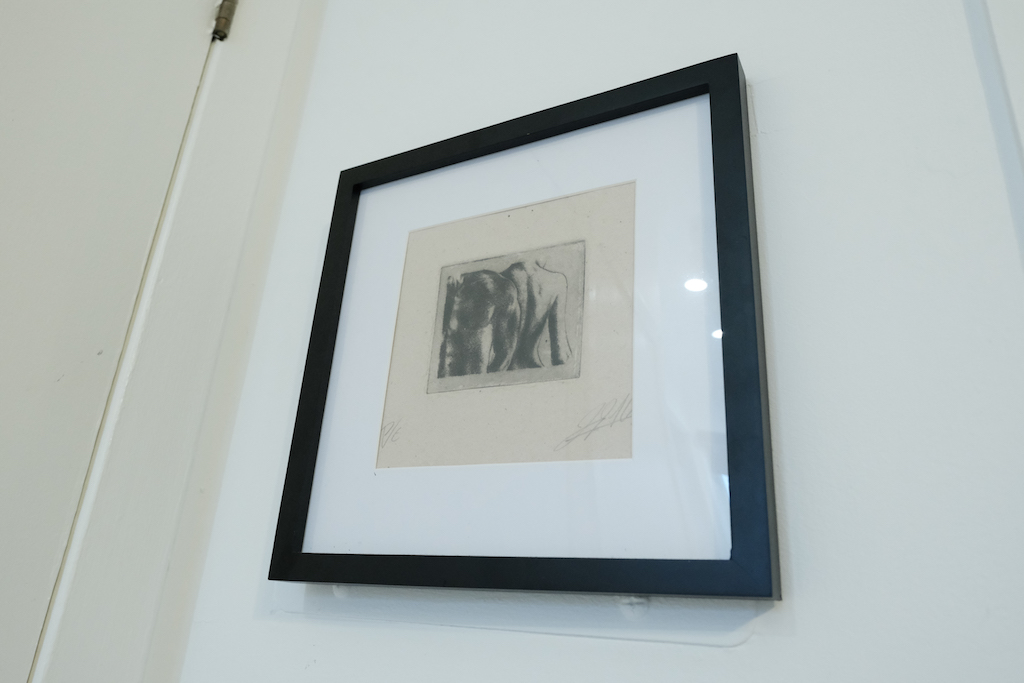 The kitchen is only 38 square feet with minimal storage, but Burns can cook everything from sesame noodles to pizza. He keeps his Vitamix in one of the cabinets, which got a fresh coat of grey-black paint and new IKEA knobs. His air conditioner sits atop the fridge. 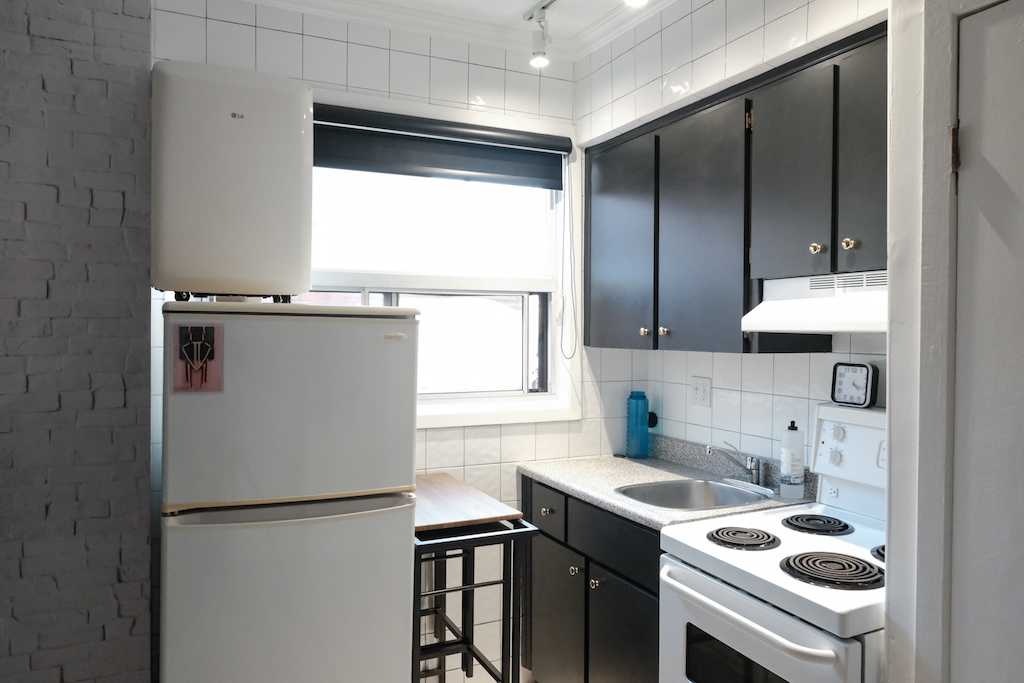 “I like the exposed knives for that American Psycho feel,” says Burns. He bought the analog clock for $2 at Dollarama and received that little gold figurine from his friend as a gift (it means “om” in Sanskrit). 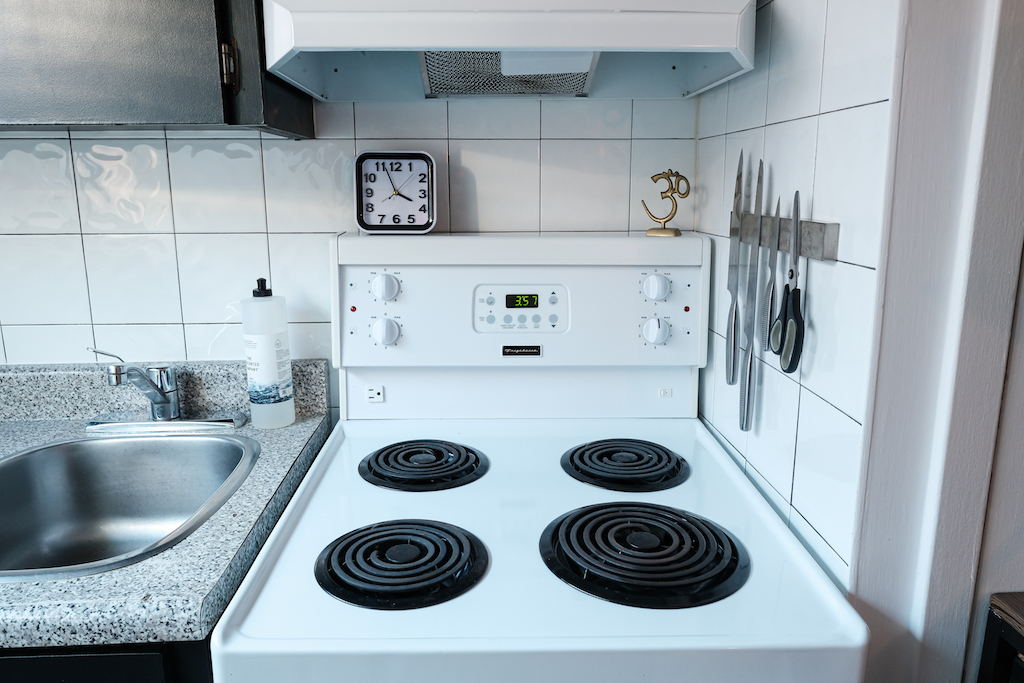 Here’s that space-saving sleeper couch he got from Facebook Marketplace. Burns loves his floofy shag rug from Rugs.ca because it’s cozy-making. 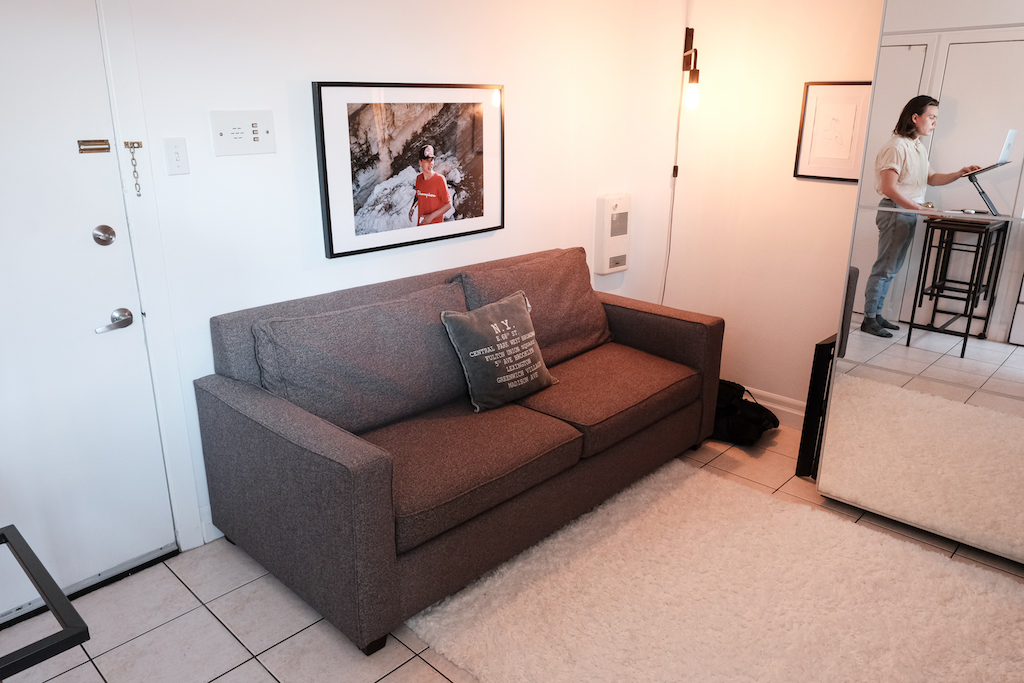 During storage, Burns keeps the sheets and duvet on the mattress and puts the pillows in his ottoman. 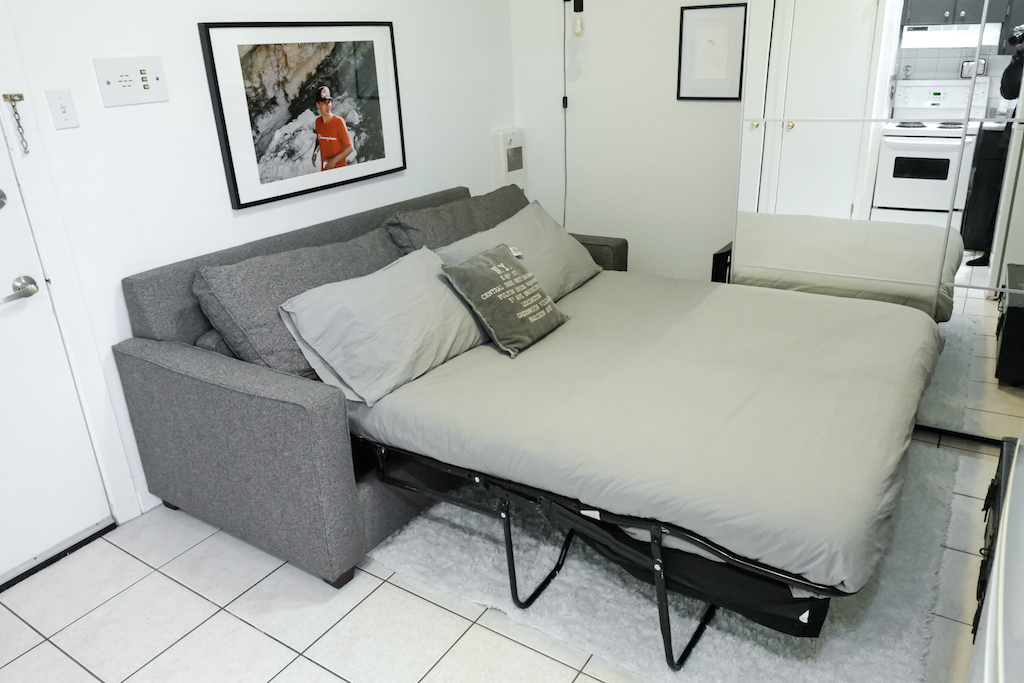 “My family went to Bermuda a few years ago, before the pandemic,” says Burns. “I took this picture of my younger brother, Tyler.” It’s in an IKEA frame. Before, his artwork was mostly unframed and not on the walls. The wall-mounted black light is from CB2. 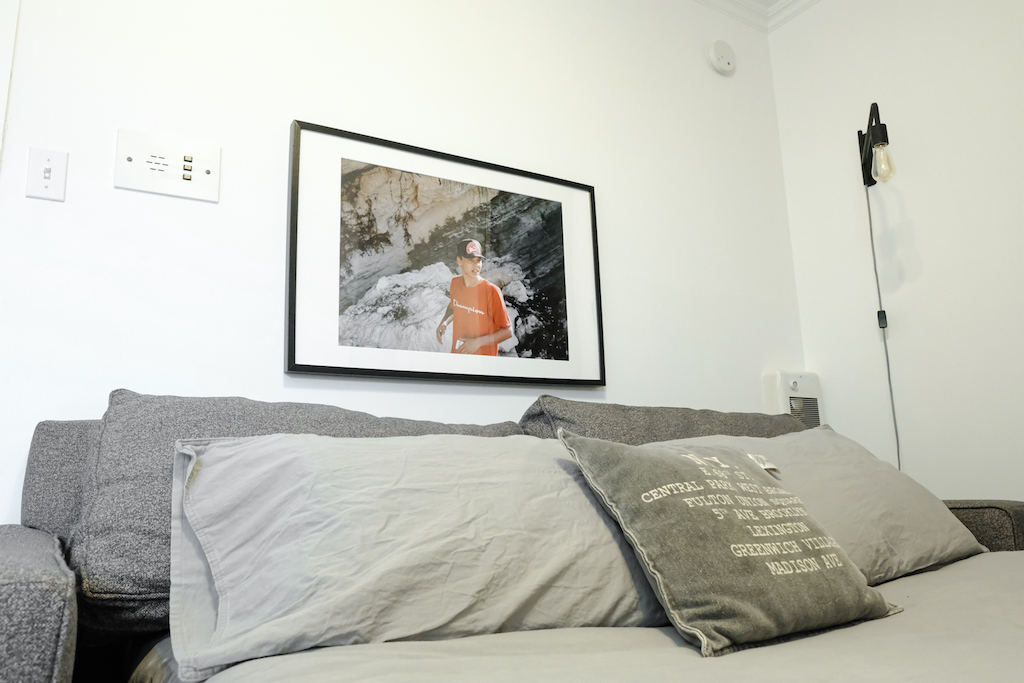 Burns bought that mirrored wardrobe, where he stores almost everything, from IKEA for $900. Burns refurbished the wall behind his television by adding faux white brick (“The wall was navy before and felt dark and dank,” says Burns.) Before the interior makeover, his record player and radio took up a lot of space, but now his music library and video games are controlled by Apple TV. 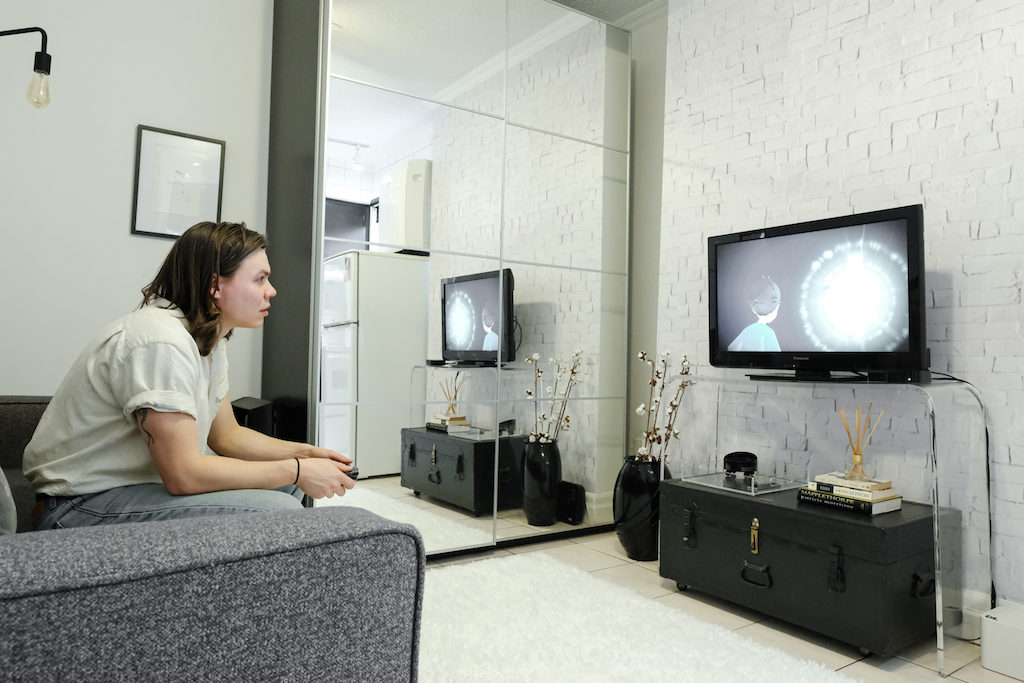 The pen drawing, tucked beside the dresser, is from a friend named Alex. During recovery from a rare disease, he drew this free-form piece that Burns loves. 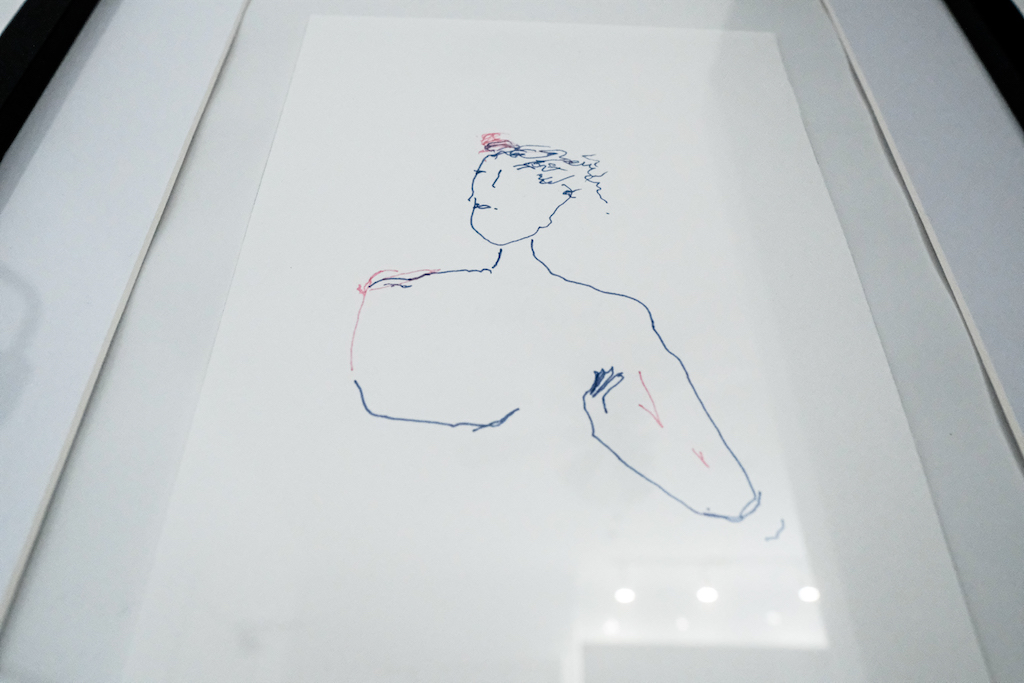 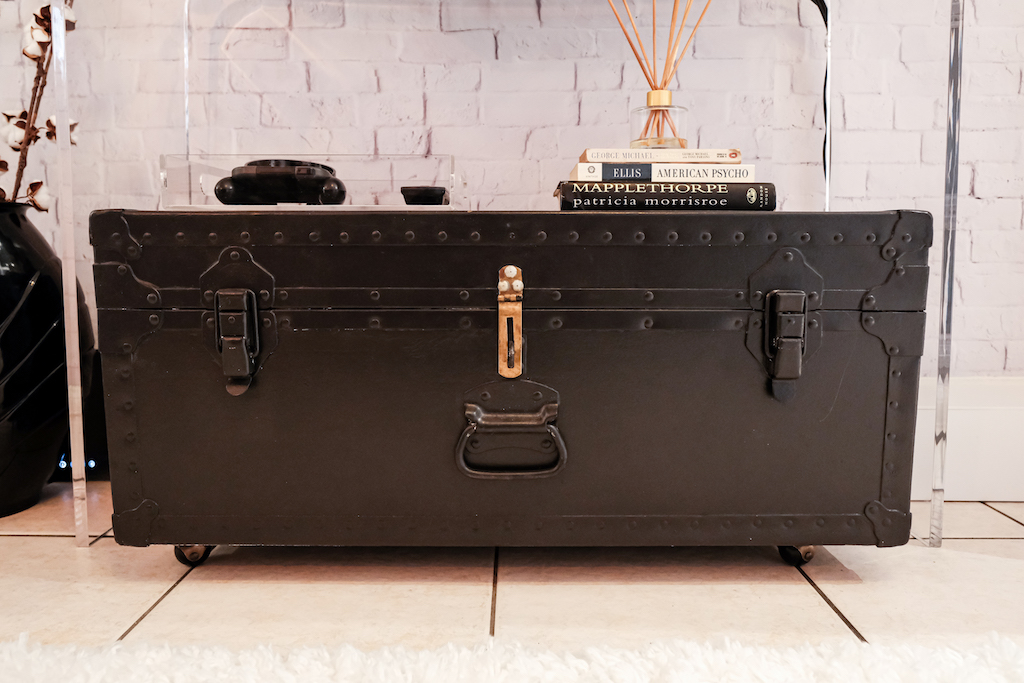 The lucite console is clear and visually doesn’t take up space. Burns got it from a shop in North York. The matching tray and sticks are from West Elm. 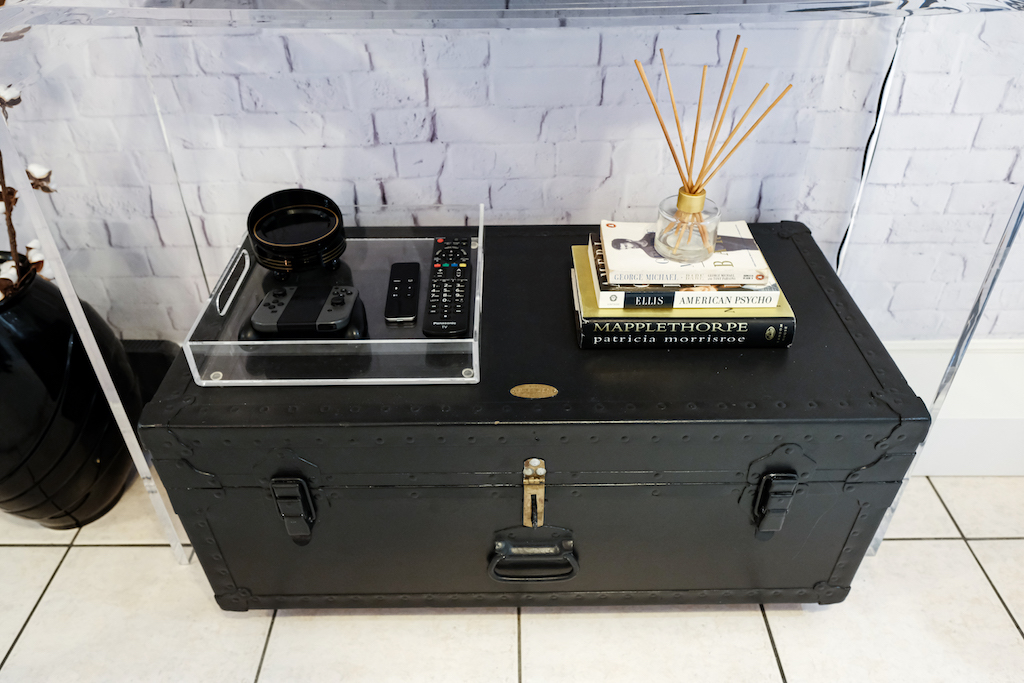 Here’s the bathroom. A coat of white paint freshened up the ceiling. 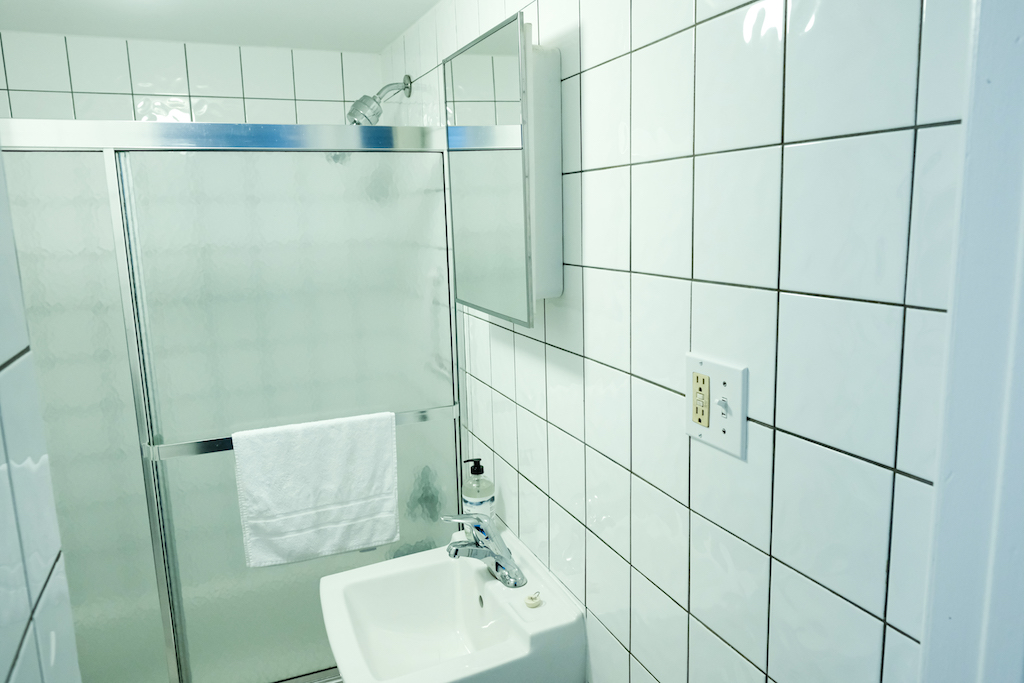 The bamboo tray on the toilet was $12 from Amazon, and holds rolled face towels and a candle, keeping everything tidy. Burns picked up the custom Prince artwork from a flea market at the Gladstone years ago. 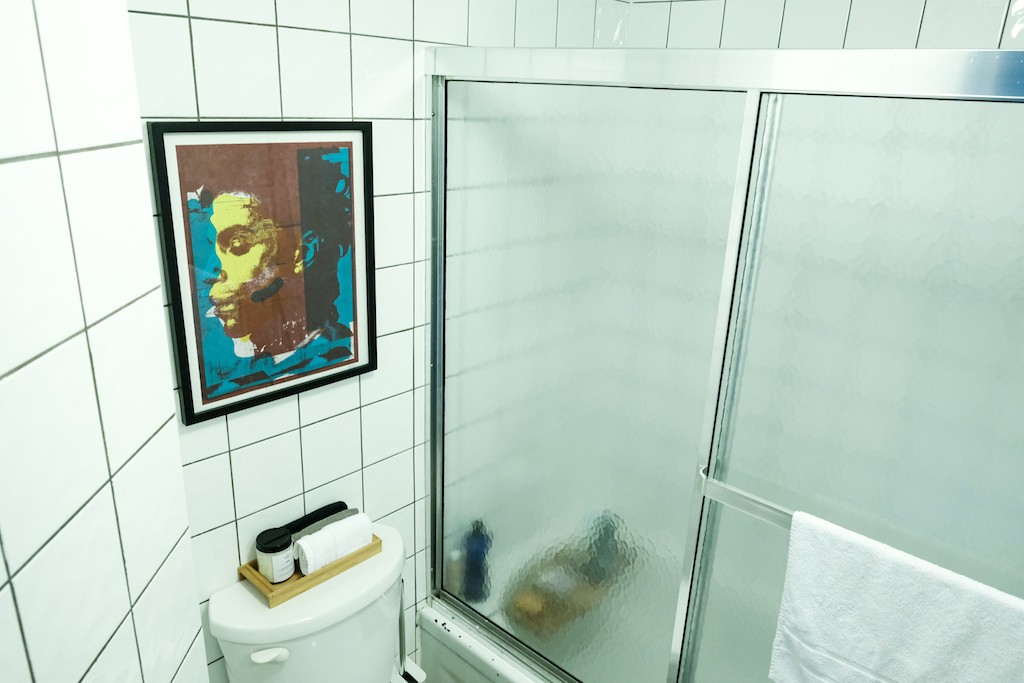