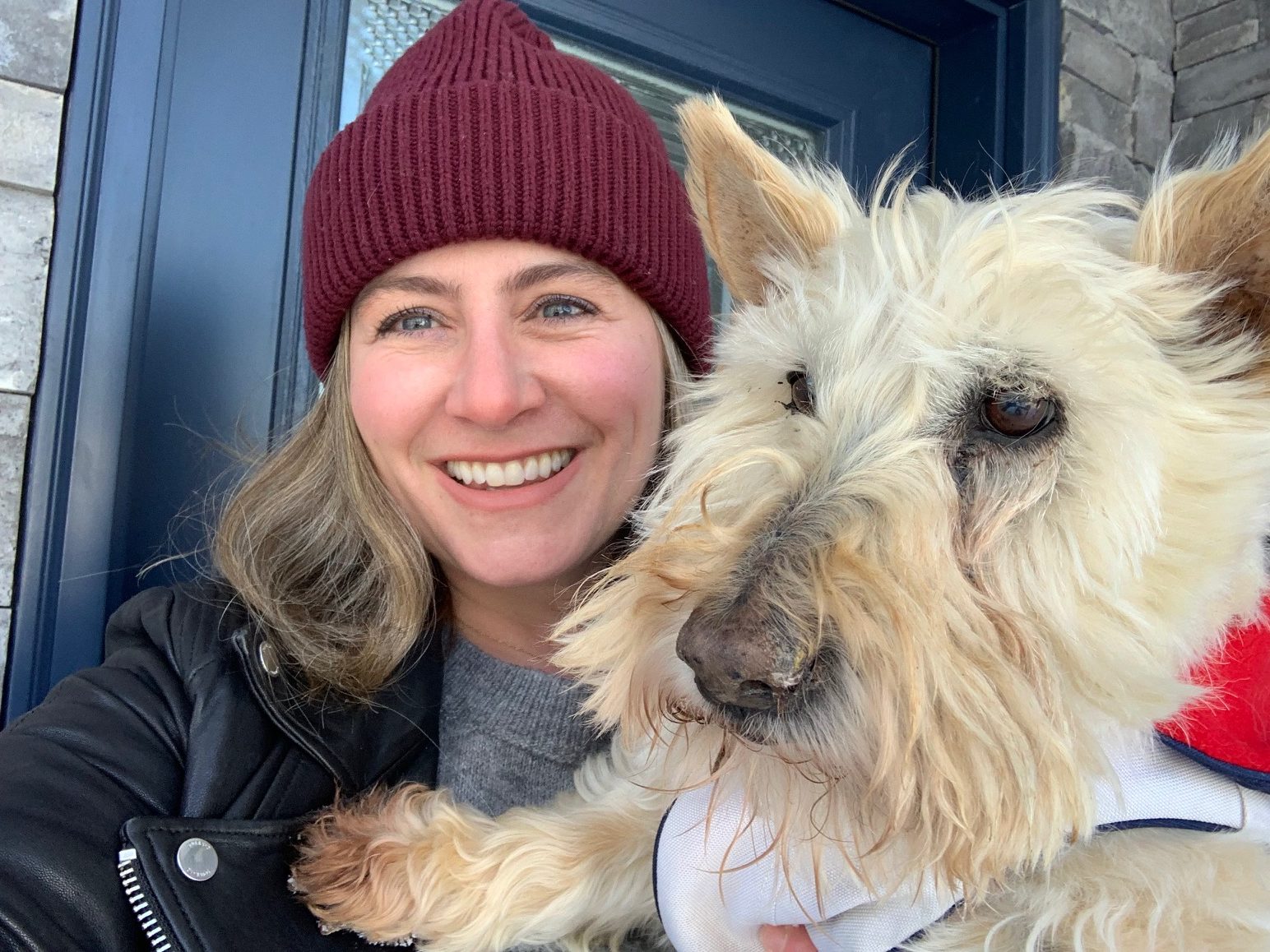 Who: Ali McEwen, 42, an account manager at a distribution company, and her 13-year-old dog Bonnie, a Scottish terrier.

The history: Ali was born and raised in Regina, Saskatchewan, but moved to Toronto in 2006 to study fashion merchandising at the International Academy of Design and Technology, a media arts college.

Her first place in the city was an $800-a-month rental at Sherbourne and Carlton. Ali was excited to live in a multicultural city like Toronto. She loved Chinatown, where she frequented restaurants like Mother’s Dumplings. She also fell in love with Kensington Market, the Distillery District and Richmond Street’s club scene. Being able to walk everywhere was another bonus.

After just a few months, she bought a one-bedroom-plus-den at Sherbourne and Richmond for $220,000. The 695-square-foot corner unit had a big kitchen island and an open-concept space, and got a lot of light through its southeast-facing windows.

In 2019, a combination of leaks from both the washing machine and bathtub pipes resulted in water damage in her condo. So, Ali decided to renovate—Toronto was home, and she imagined living in the condo for the rest of her life.

Ali loves to travel, whether to her parents’ second home in Arizona or with her friends to Portugal or Greece. Prior to Covid-induced border closures, Ali travelled to Arizona, Cuba and Barbados. Even in retirement, she thought, she would keep the place as a home base while she travelled all over the world.

Because she loves to cook, she added a high-end Bosch stove, cooktop and refrigerator to the kitchen. She also replaced the flooring with vinyl throughout the unit. Then she redid the bathroom, adding glass shower doors and a luxury vanity. In total, the renovation took two months and cost close to $130,000.

She moved back into the unit in December 2019, ready to cherish her condo in between trips around the globe. Just a few months later, Covid hit.

Ali first contemplated leaving Toronto when the pandemic shut everything down. She began to think about her family back in Regina. “I have aging parents, and it made me nervous to think that the world was closing and I wouldn’t be able to get home,” she says. When she was able to visit them during the summer of 2020, the thought of moving back permanently came to mind.

The desire for more space was a secondary consideration. Ali, who works for a U.S.-based company, was already working remotely, occasionally visiting customers at their offices.

But the lockdowns, and the extra time spent at home, made her notice the limitations of her condo, with her den acting as an office, gym and a place to hang laundry. She wanted more room, plus extra space for Bonnie to run around, perhaps a backyard.

By the fall of 2020, Ali started strategizing. She planned to sell her Toronto condo and use the profits to buy and renovate a house in Regina.

The hunt: After her condo was sold, the house hunting became more serious. She began working with a real estate agent in Regina, who kept an eye out for new listings. Because Ali was still in Toronto until the end of March, she could only see homes virtually. Her parents would accompany the agent to appointments and Ali would join over Facetime.

In late January, Ali and her parents viewed a four-bed, two-bath in the Lakeview neighbourhood of Regina, listed for $400,000. Less than a 10-minute drive from downtown Regina, the area was dotted with mid-century homes, and it was within walking distance of restaurants, pubs and grocery stores. Best of all, the home was less than a 10-minute walk from both her brother’s and parents’ houses. 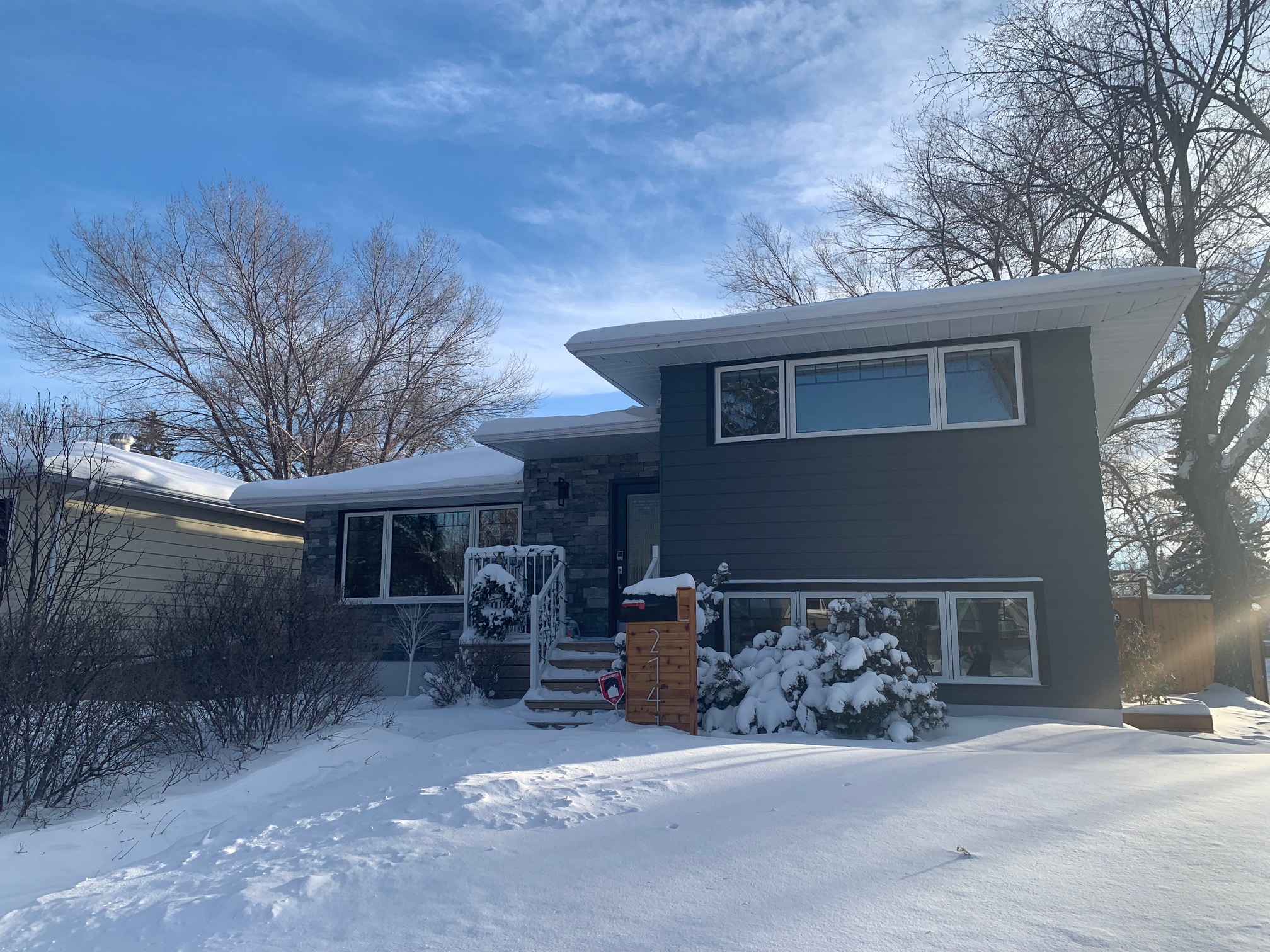 The place was on a quiet street, especially by Toronto standards. Instead of a driveway, there was a detached garage in the back that was still in good condition. The front yard was bare and needed some landscaping work, Ali says, but a cedar fence that wrapped around the property made it look beautiful. The lot was 5,500 square foot in total.

The home was 1,700 square feet spread across four split levels, with large windows and a circular skylight, which let in loads of natural light, plus an entire window wall on the west side of the house, which provided beautiful views of the sunset.

Just off the back deck, there was a three-season room, where Ali imagined reading or having cocktails with friends.

At the end of March, with Bonnie in tow, Ali and her mom made the 23-hour drive west on the Trans-Canada Highway, stopping for a night in Thunder Bay on the way. Once in Regina, she settled in to her temporary home at her parents’ house. Then the renovations began.

The kitchen was gutted and walls felled to create a large open-concept space on the main floor. 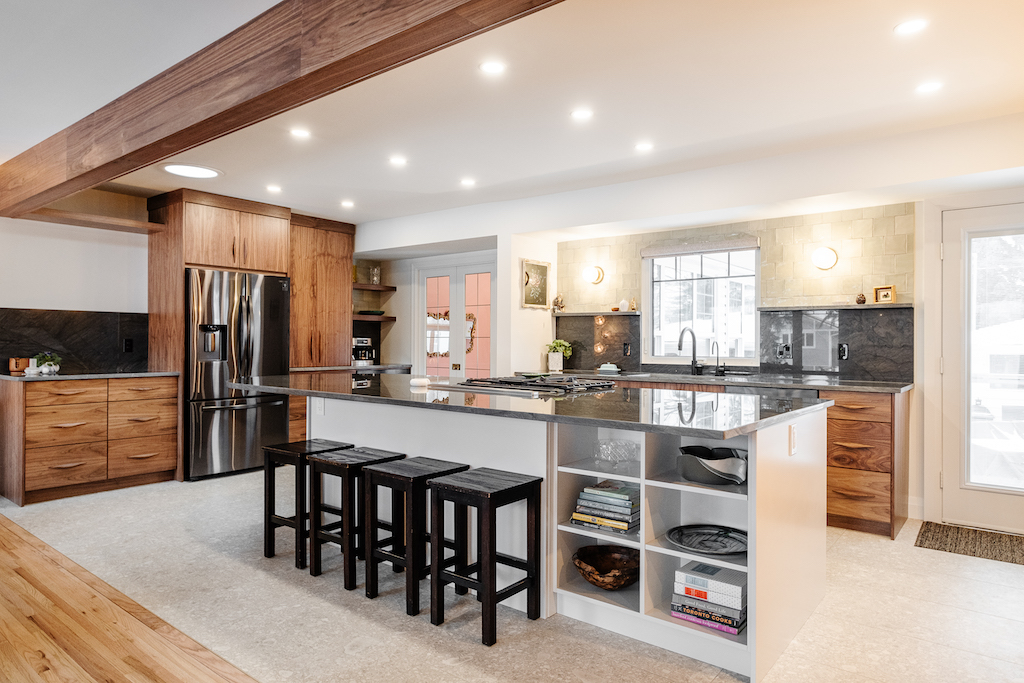 It was important for Ali to keep some of the character of the home, so she refinished the original hardwood floors. 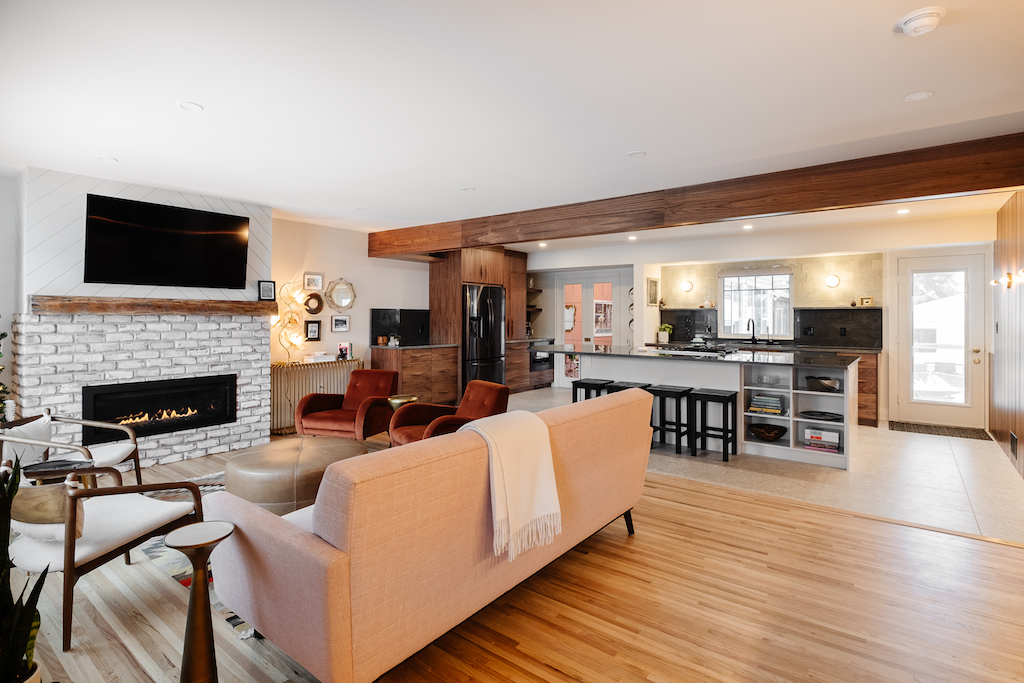 She also wanted the home to feel warm and welcoming, so a gas fireplace was added. 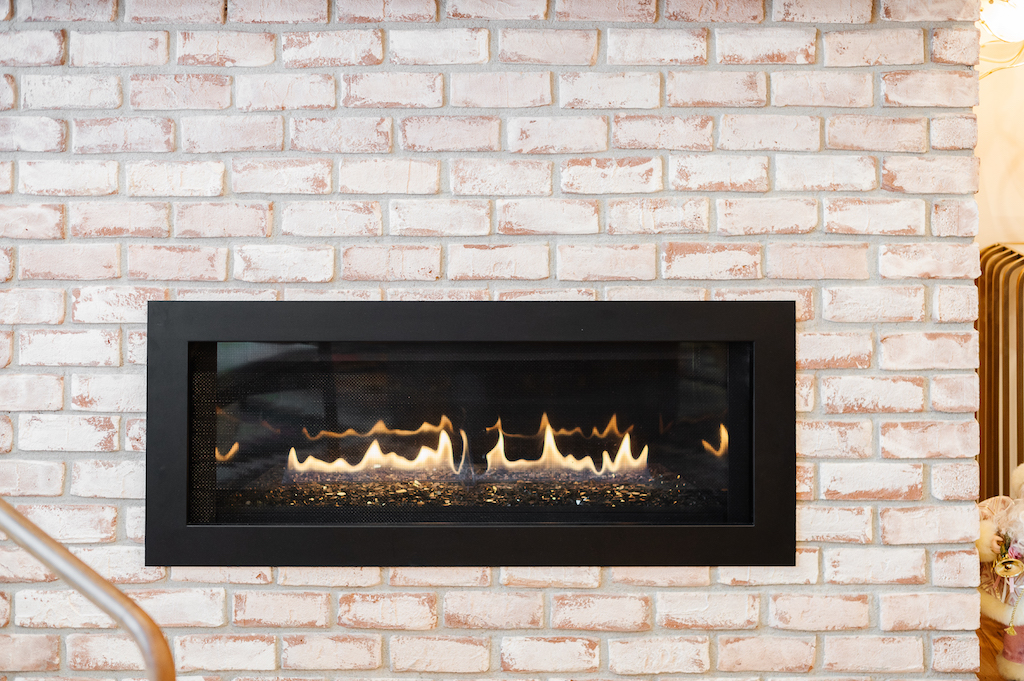 On the first level down from the main floor, she set up her home office and renovated the adjacent bathroom. In the basement is her gym space—a contrast to when her Peloton sat in her condo dining room.

Ali also worked with a local designer to integrate a modern mid-century design, including a striking pink sofa, walnut cabinets, a walnut feature wall, California-inspired art and a massive kitchen island. “The vibe I get is people gathering, having parties,” Ali says. “Sort of that Mad Men feel.”

The renovations went over budget, partly because of roof repairs. Ali knew a portion of it needed to be redone based on the home inspection, but the contractor noted that the entire roof wasn’t in great condition. Ultimately, Ali opted to repair the whole thing to prevent future problems.

The final cost jumped to $190,000, but Ali says it was worth it to make it livable for the long term.

The outcome: By late November 2021, Ali was ready to move in—trading her Toronto condo for a bigger space and a dream renovation.

She’s excited by the space and the shift in lifestyle. “There’s something nice about escaping the computer,” she says. “In my condo in Toronto, because it was one open space, I was always looking at my computer. You couldn’t escape it unless you physically put your computer away. It’s nice to have those transition spaces where you’re not being surrounded by your day job.”

Instead of taking Bonnie in the elevator every time they want to go outside, they simply walk out into the backyard. She’s also looking forward to the spring, when she can dig into her backyard planters and start growing veggies.

She also likes that her neighbourhood is safe. Ali can walk her dog at 6 a.m. without being nervous, a feeling she didn’t have in downtown Toronto.

Ali says her hometown has a strong art and culinary scene, she says. Because Regina is more affordable, she points out, there’s opportunity for entrepreneurs to open new and unique restaurants, such as a wine bar that she plans to visit soon.

Most importantly, Ali doesn’t miss Toronto yet, just her Toronto friends. But she says the pandemic showed us that we’ve been living a “hustle, hustle” life, without stopping to catch our breath. “I feel rejuvenated being here,” she says.