Sale of the Week: $2.9 million for a Tudor home in North York with an eccentric colour scheme

Sale of the Week: $2.9 million for a Tudor home in North York with an eccentric colour scheme

A stately Tudor home on a 60,000-square-foot ravine lot. The place covers 6,200 square feet and has five bedrooms, five bathrooms and plenty of period features, including exposed wood beams, cathedral ceilings and antique wall sconces—all of which are contrasted by colourful wallpaper. The front façade is protected by the heritage board.

In the 1920s, the house was built for Thomas Rogers, the secretary treasurer of the Lake Simcoe Ice and Fuel Company. In 1961, the current seller purchased the home for $60,000. Since then, it has remained with the same owners. Nearly 60 years after purchasing the property, the seller is moving into a retirement home.

Here’s a look at the front entrance. In the vestibule there’s slate flooring and a stained-glass window. In the foyer, a lantern-style chandelier hangs from a beamed ceiling: 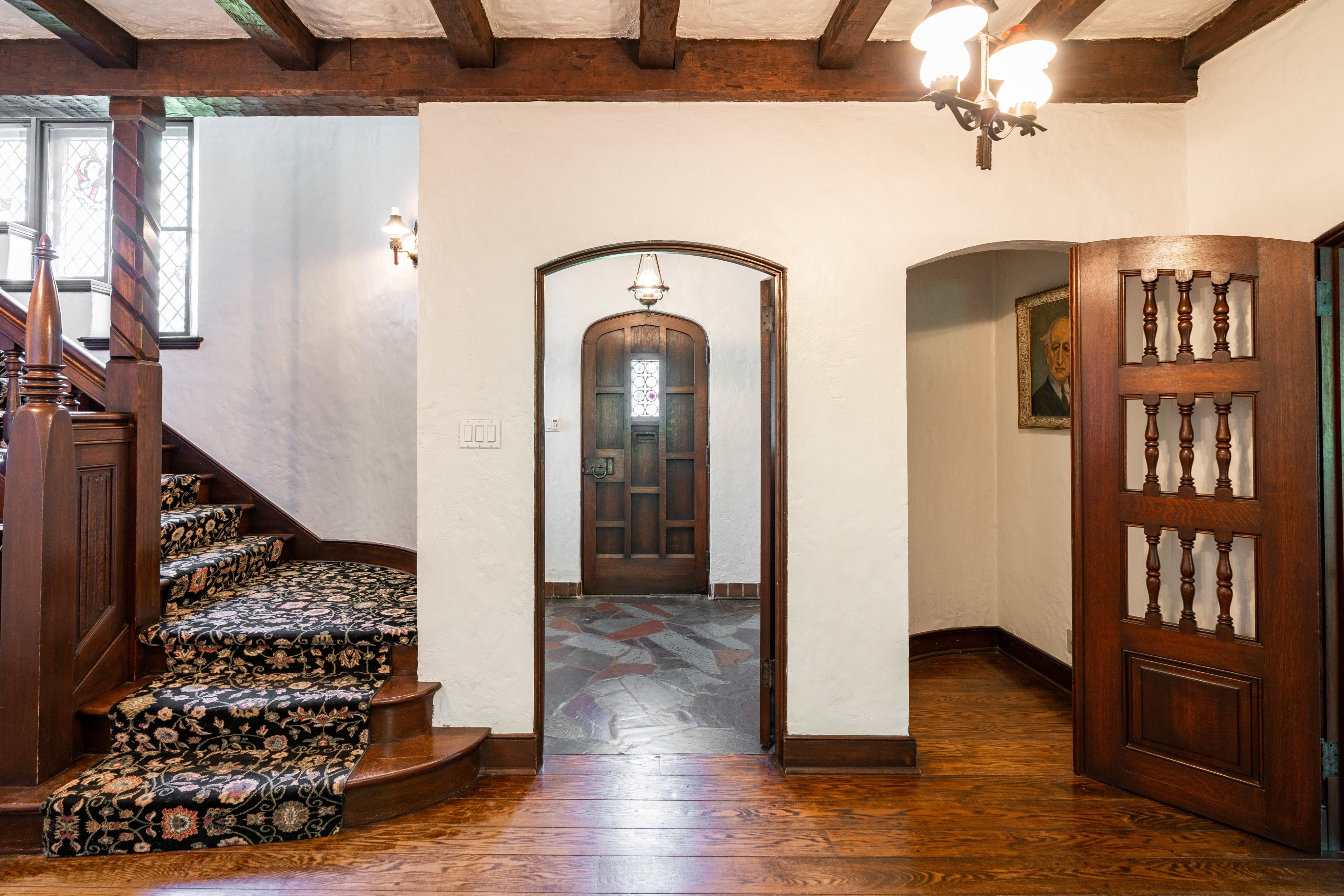 The kitchen has granite countertops and open storage shelves: 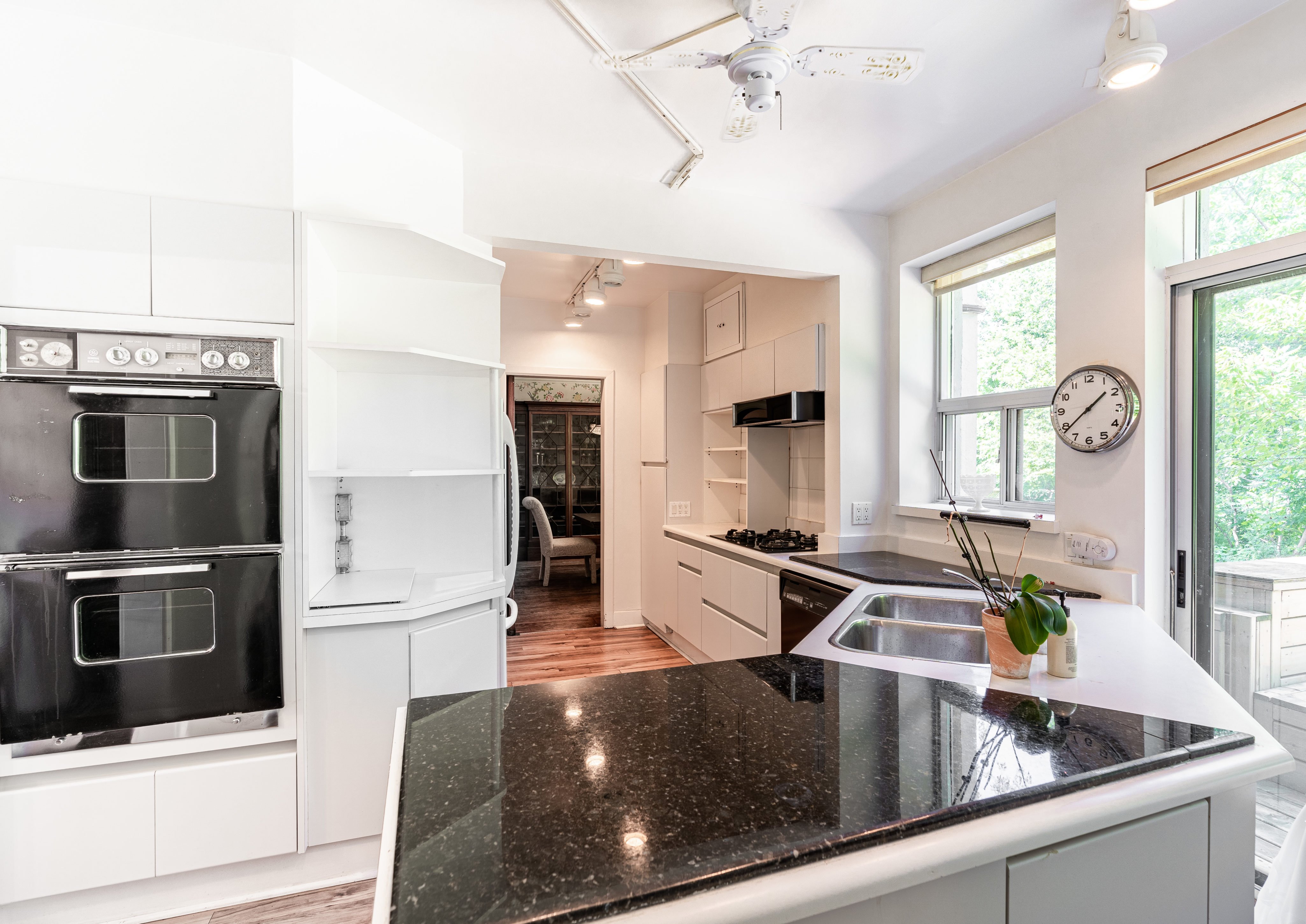 In the dining room, there’s a Tiffany-style chandelier and cheery floral wallpaper: 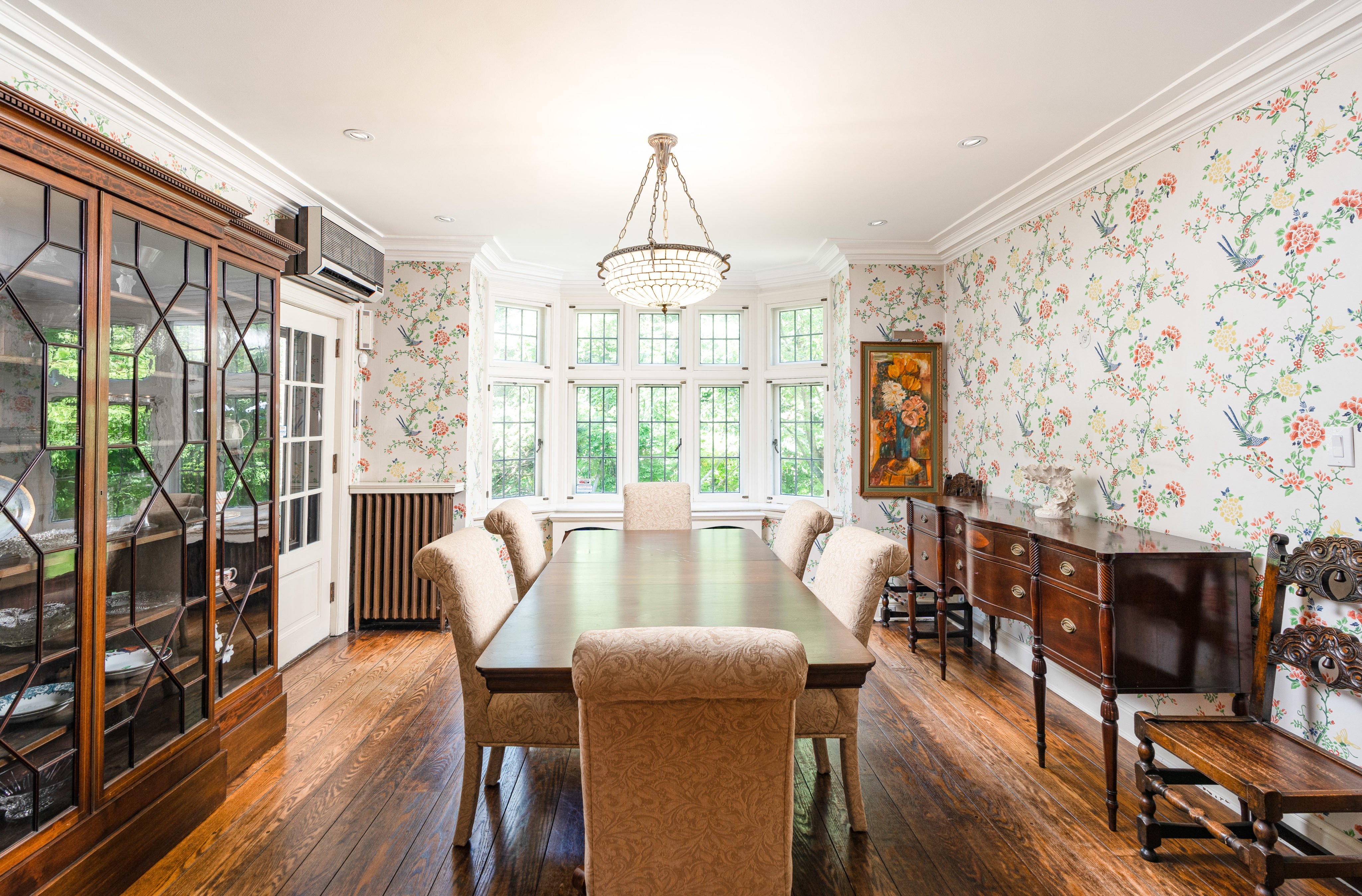 The living room has oak flooring, a quatrefoil plaster ceiling and wall sconces: 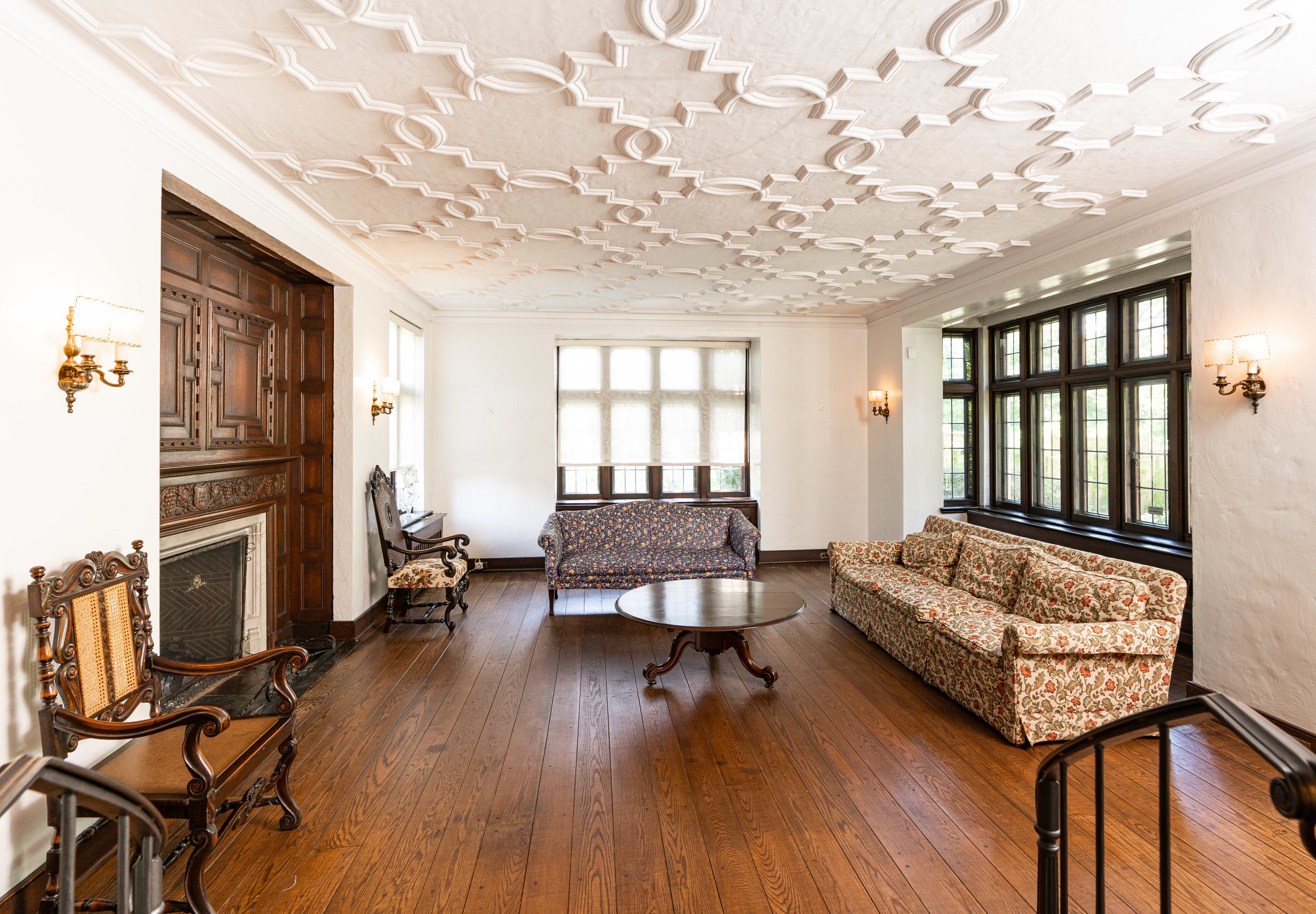 Notice the built-in bookshelf and wood-burning fireplace with a limestone mantel. This room feels like something out of a 19th-century novel: 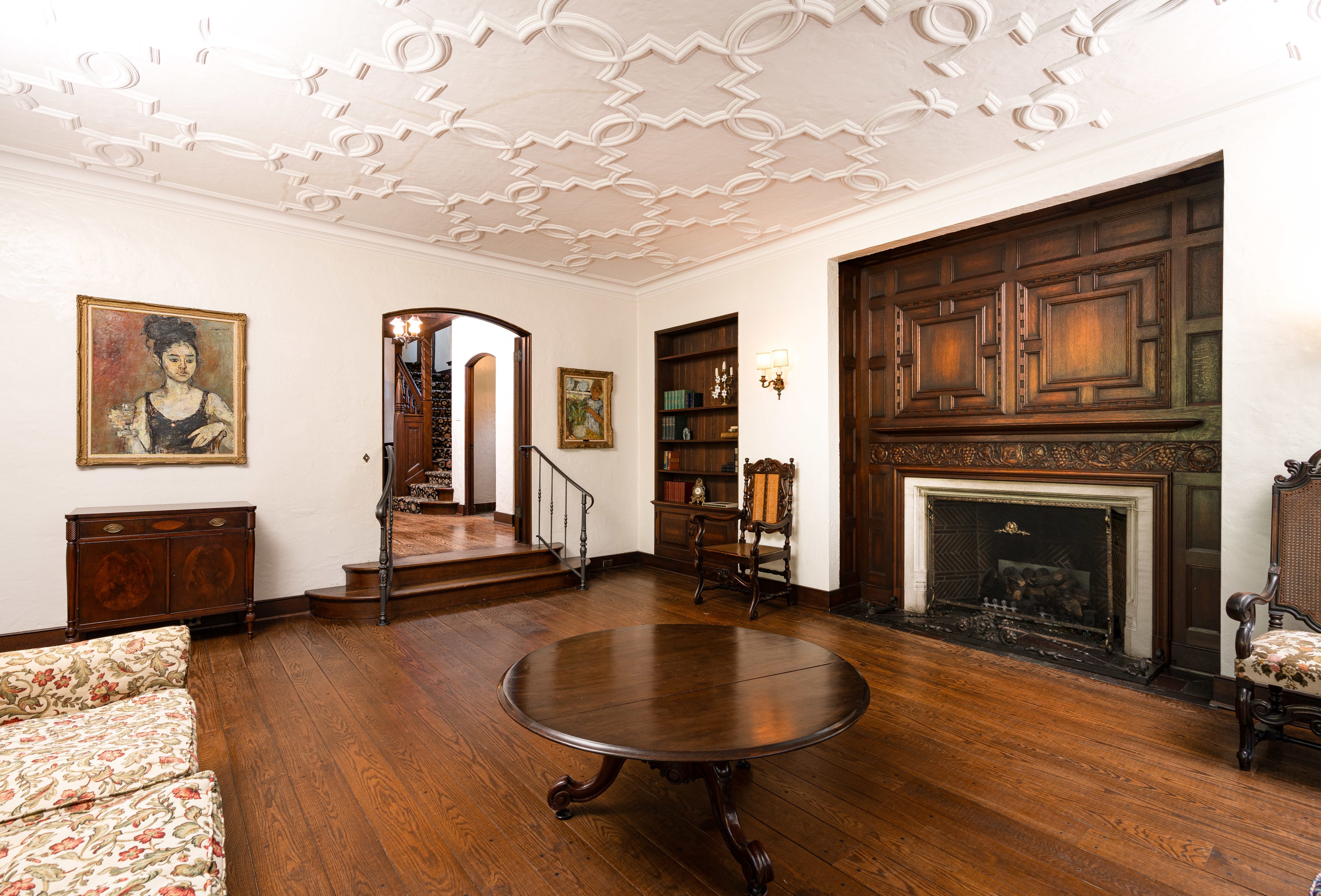 A cute breakfast room, with a beamed ceiling, chandelier and leaded glass windows: 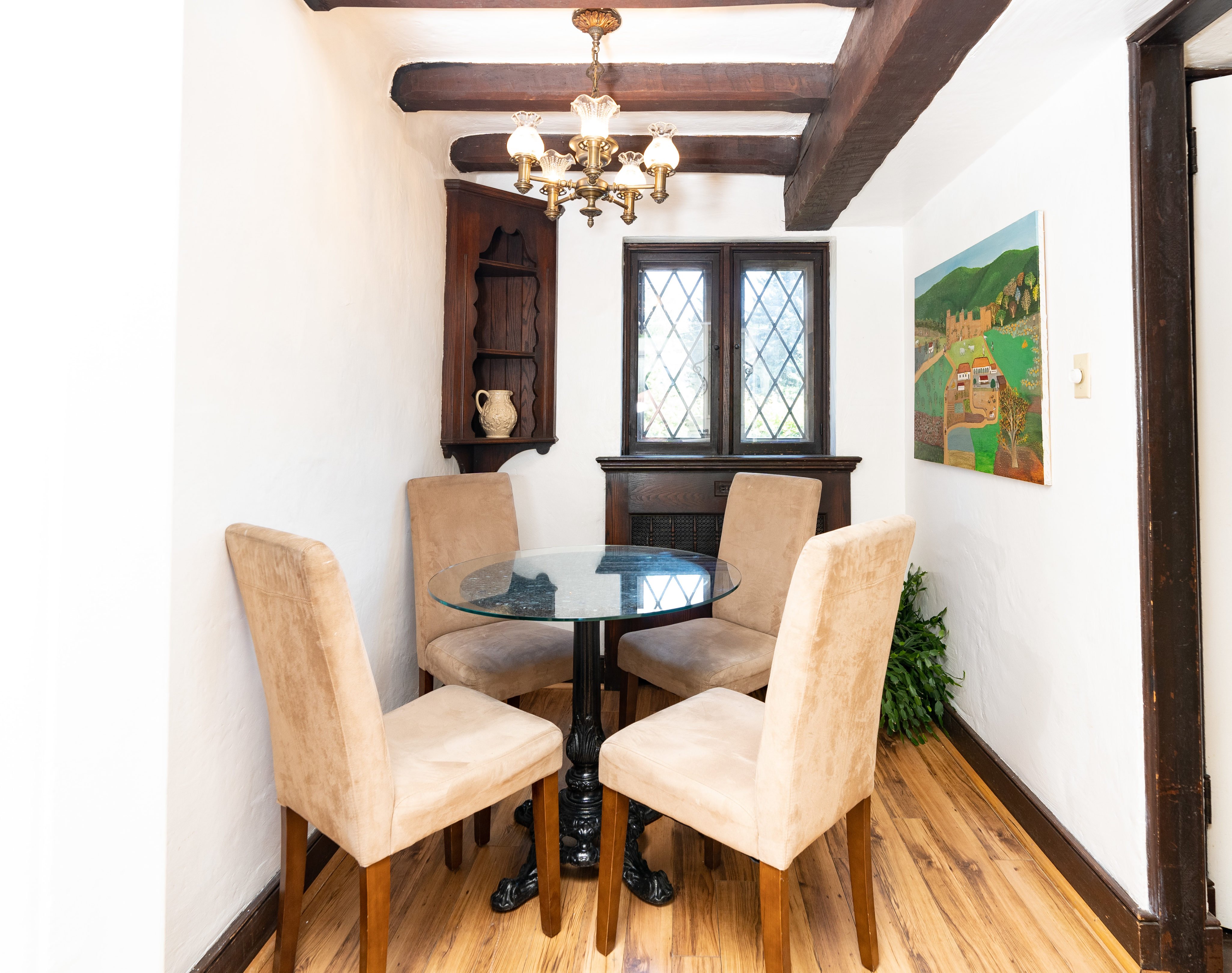 Here’s a different view of the foyer and another lantern-style chandelier. That staircase is decorated by a wool carpet with floral print: 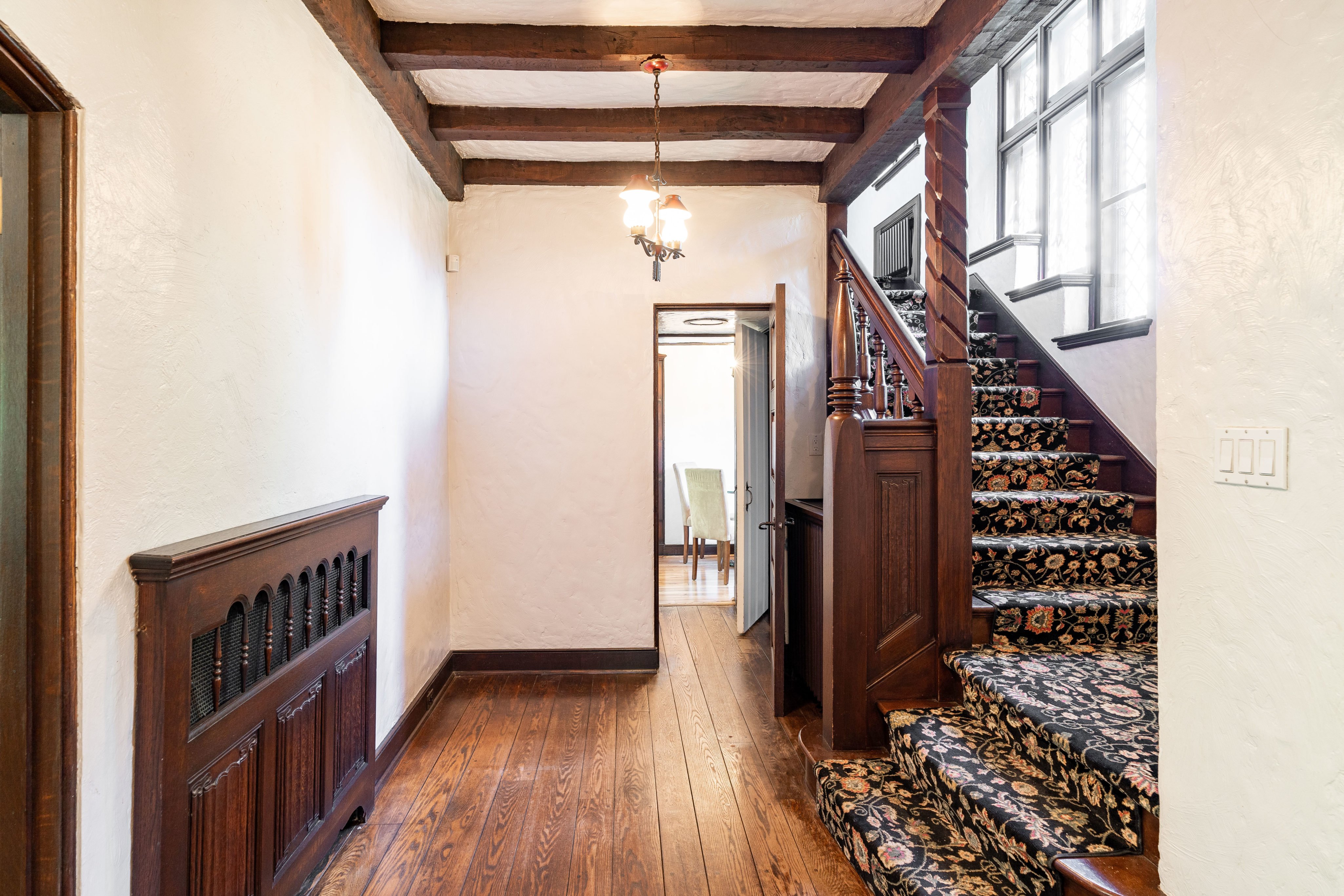 On the second level, there are three bedrooms, two bathrooms and a family room: 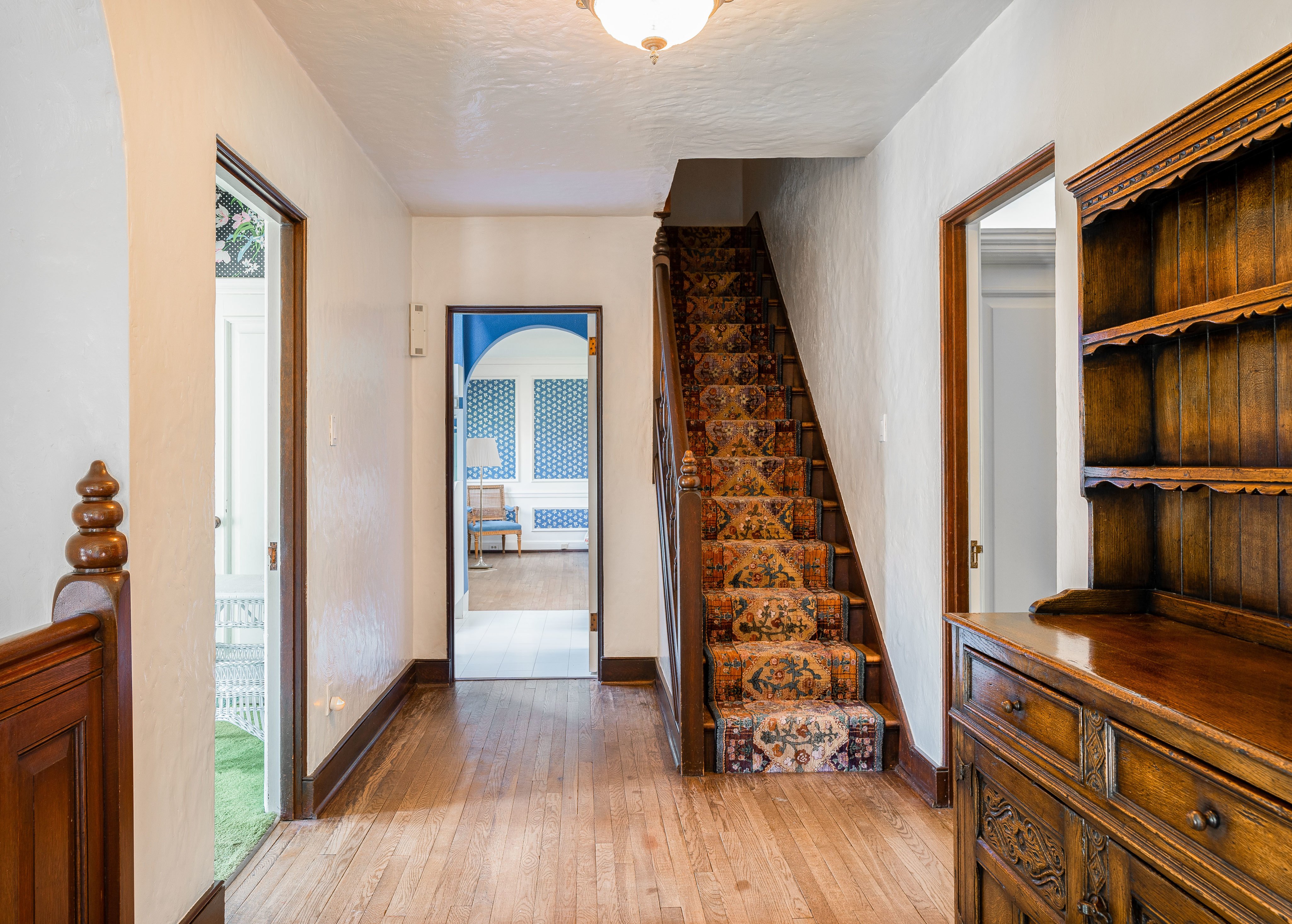 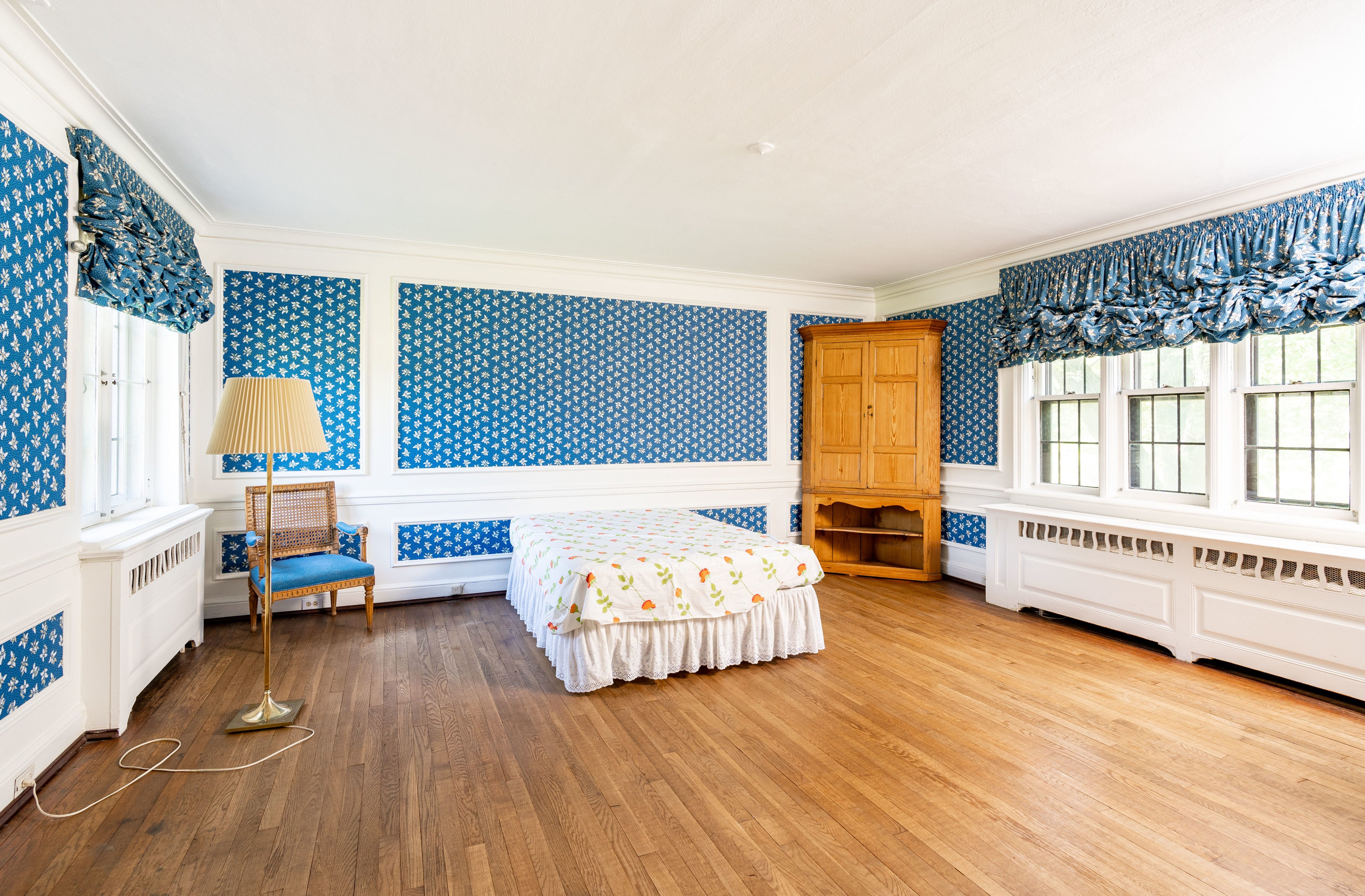 And a makeup area: 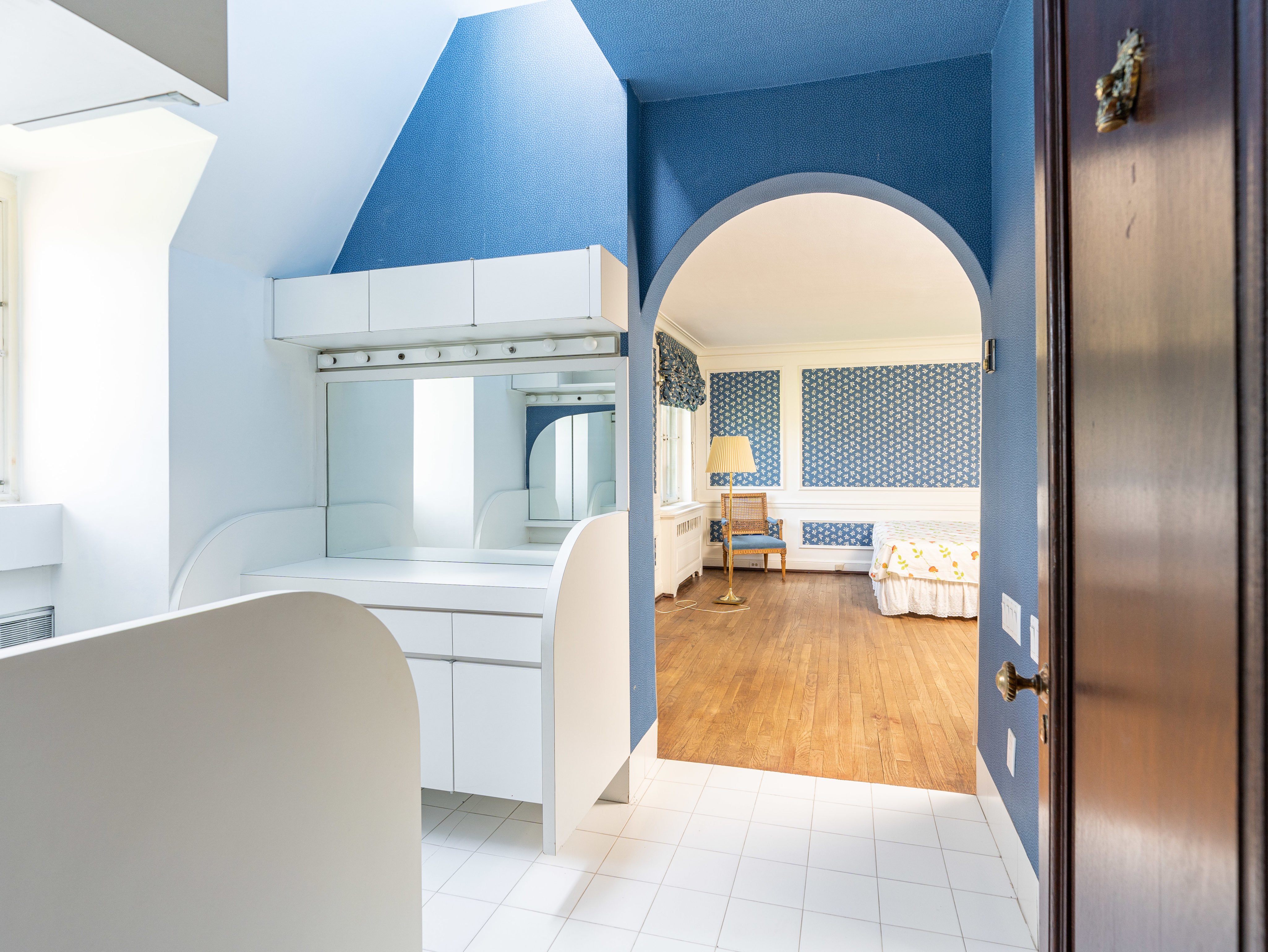 Which looks like something from a Stanley Kubrick film—at least from this angle: 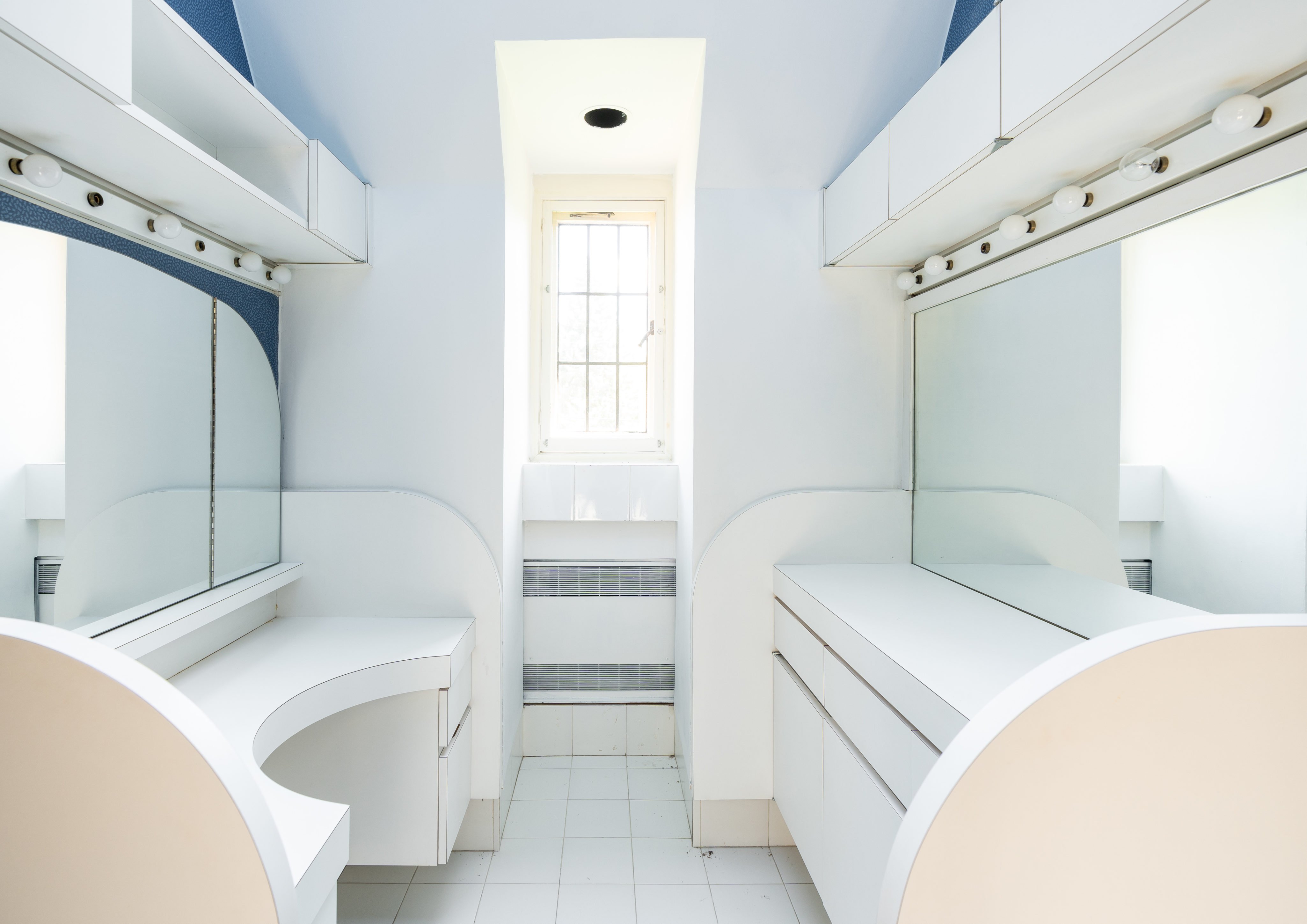 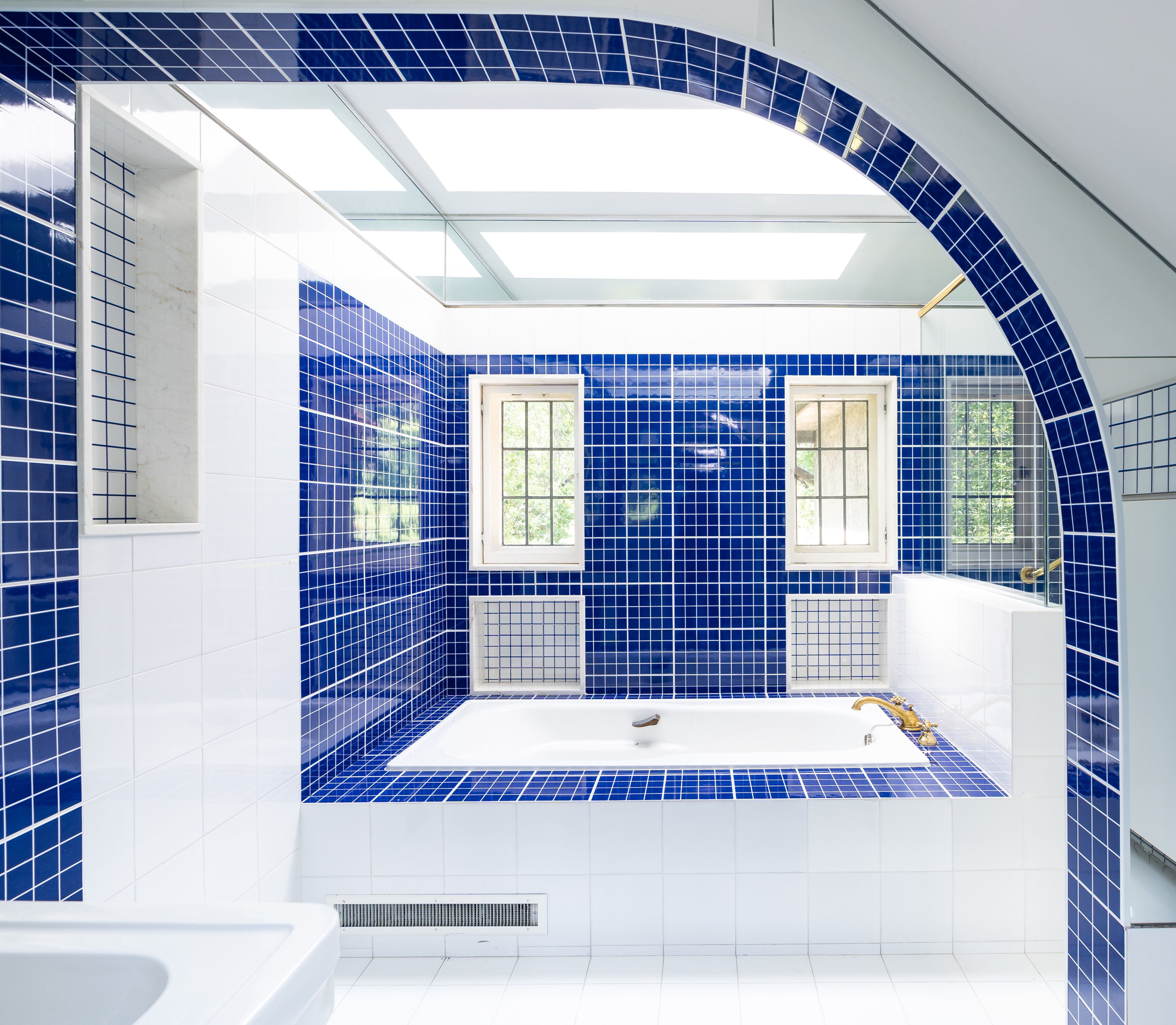 There are gilded accents in the bathtub and shower: 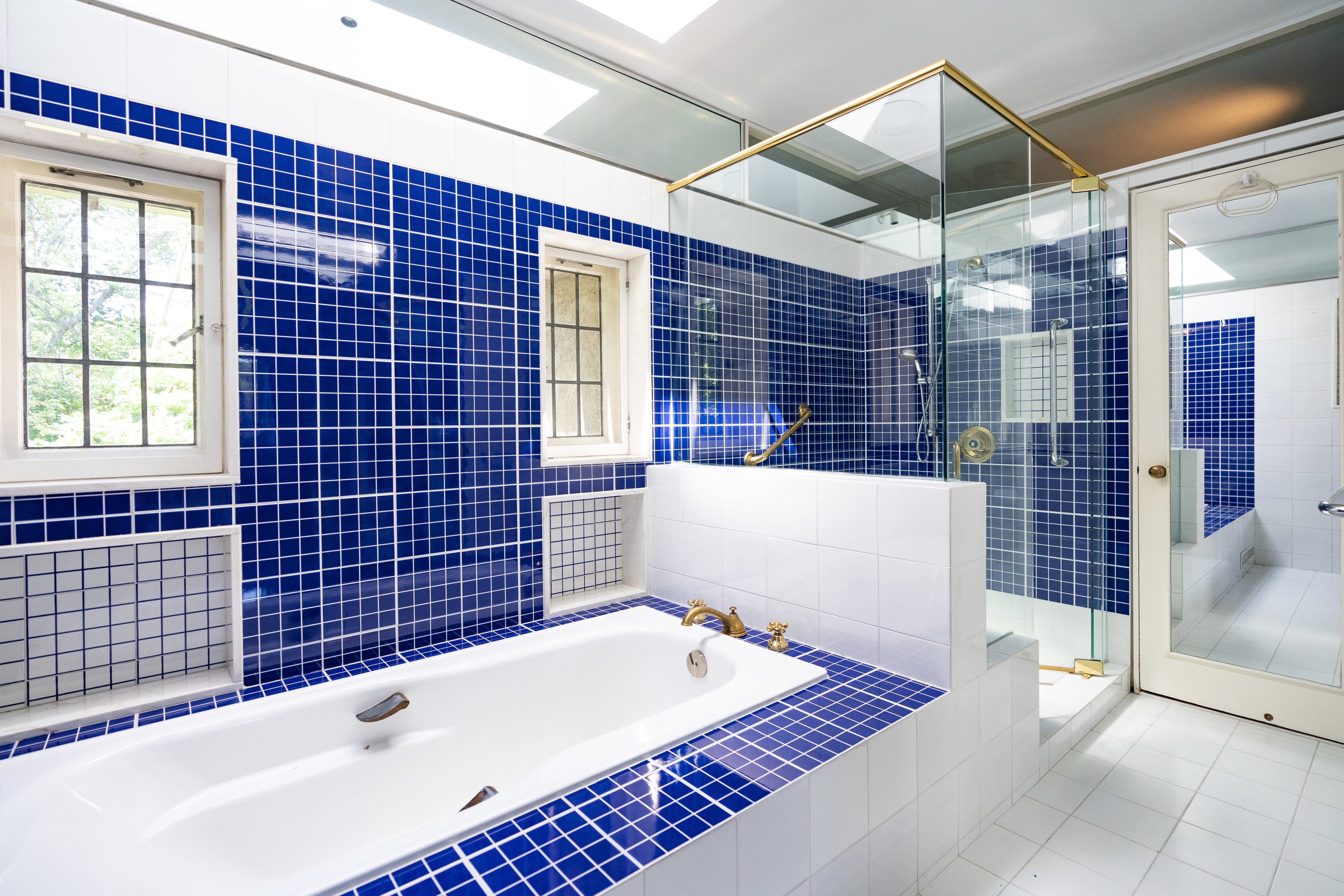 This looks like the perfect room for a tea party—or perhaps that green broadloom carpet would be well-suited for mini-putt: 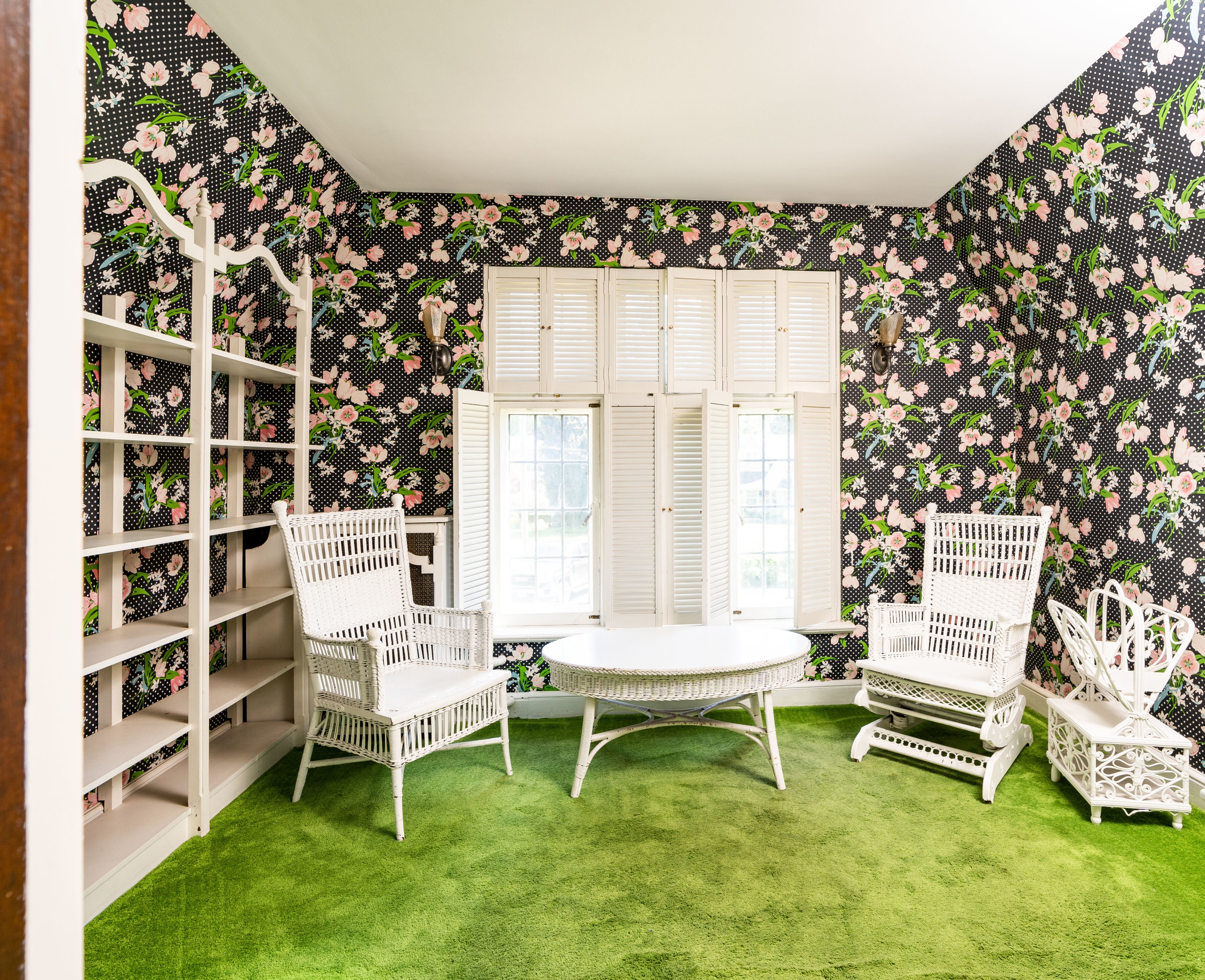 More hardwood flooring in here, to go along with a pair of wall sconces: 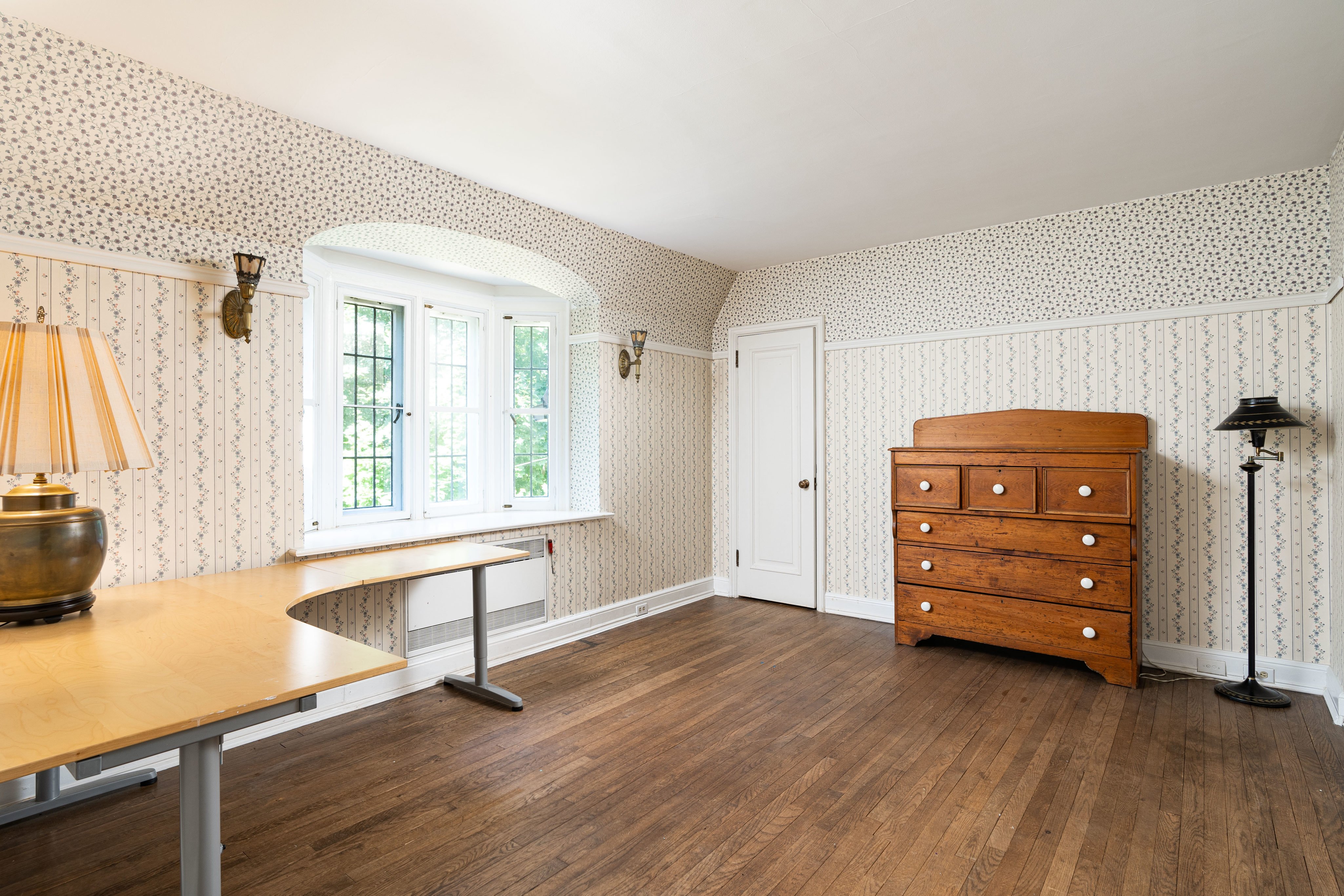 This is the second-floor dressing room: 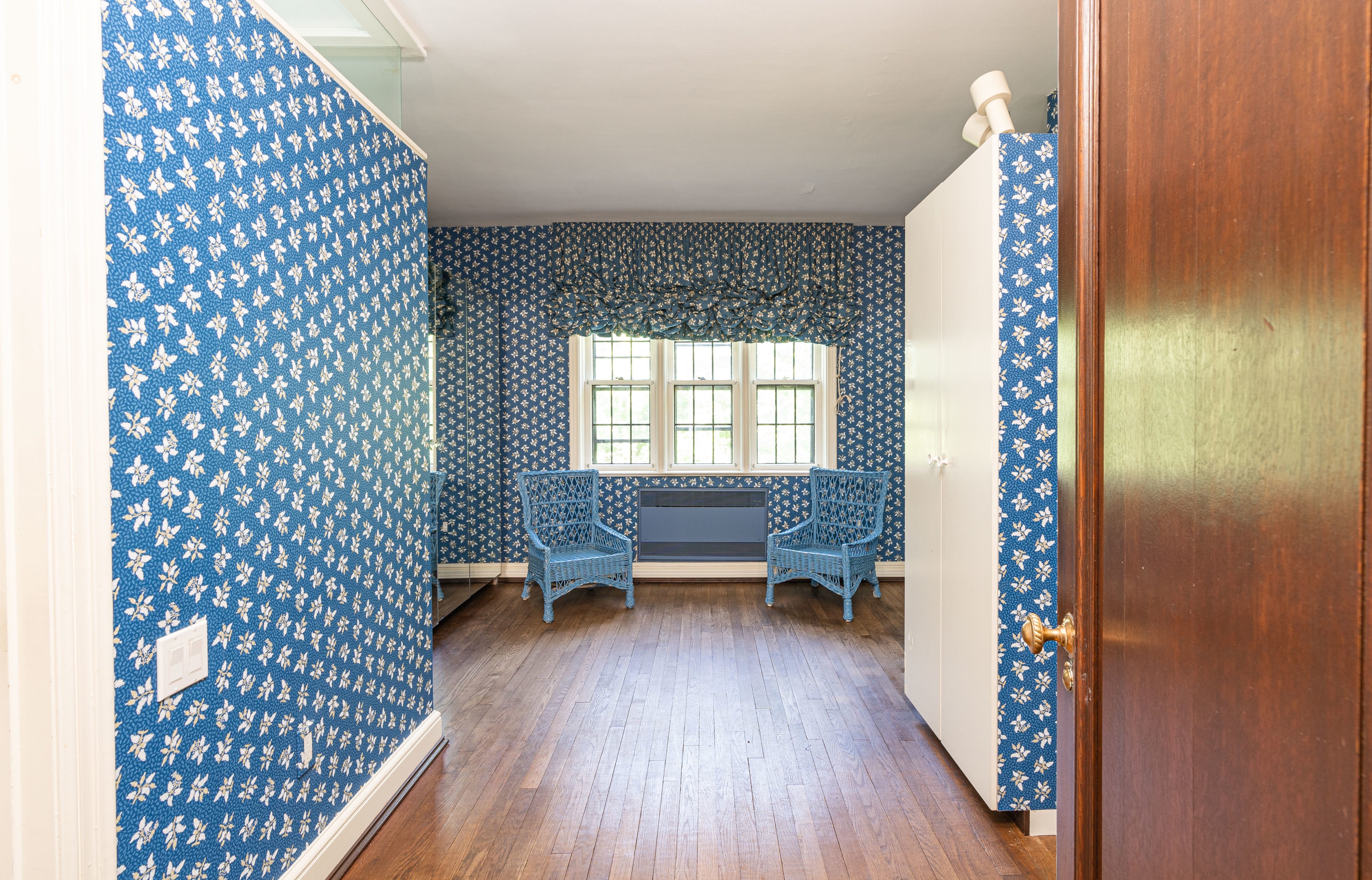 The second-floor family room has built-in bookcases and a vaulted ceiling with exposed beams: 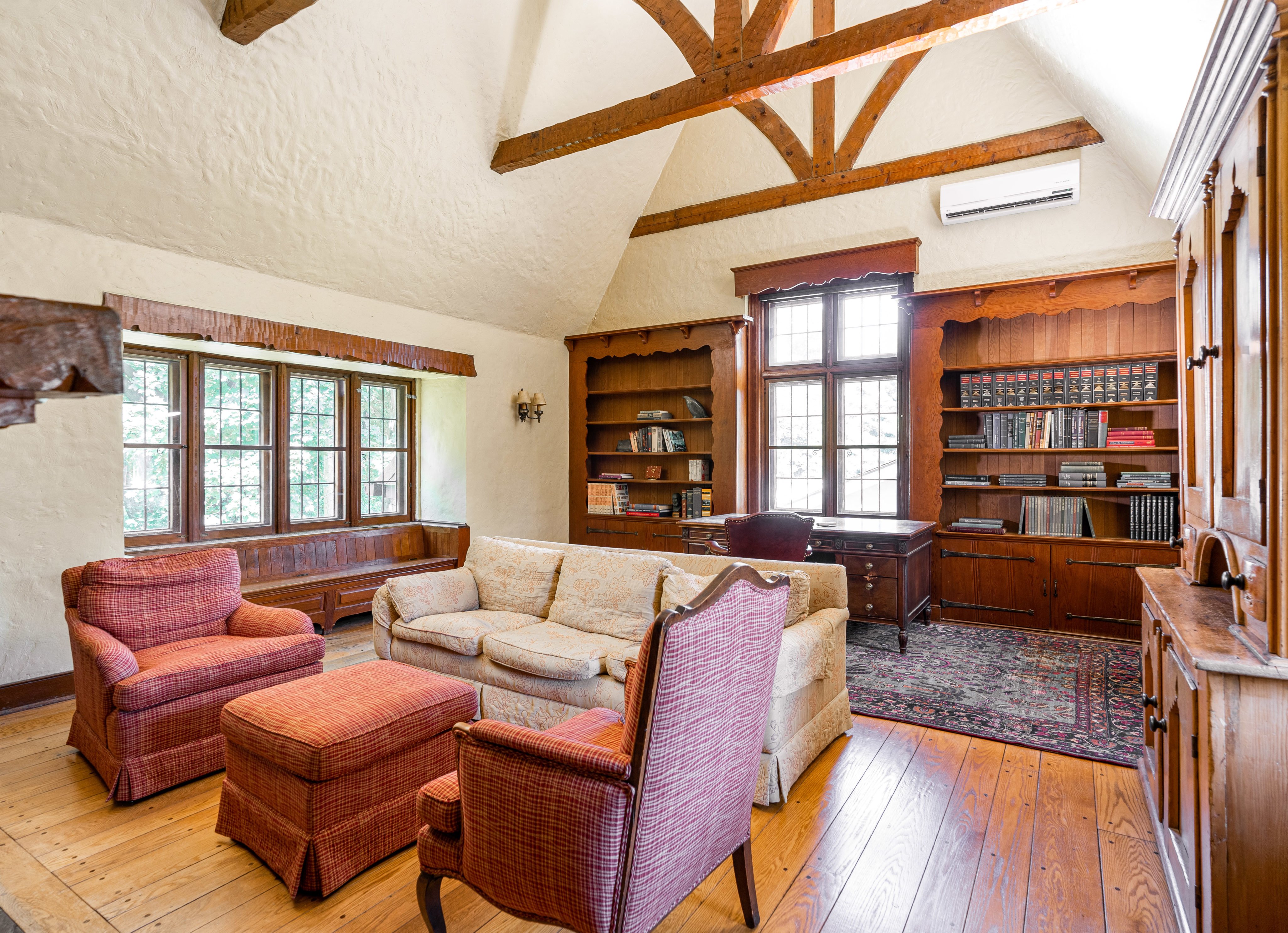 There’s a double sink and mosaic tiling in the second-floor bathroom: 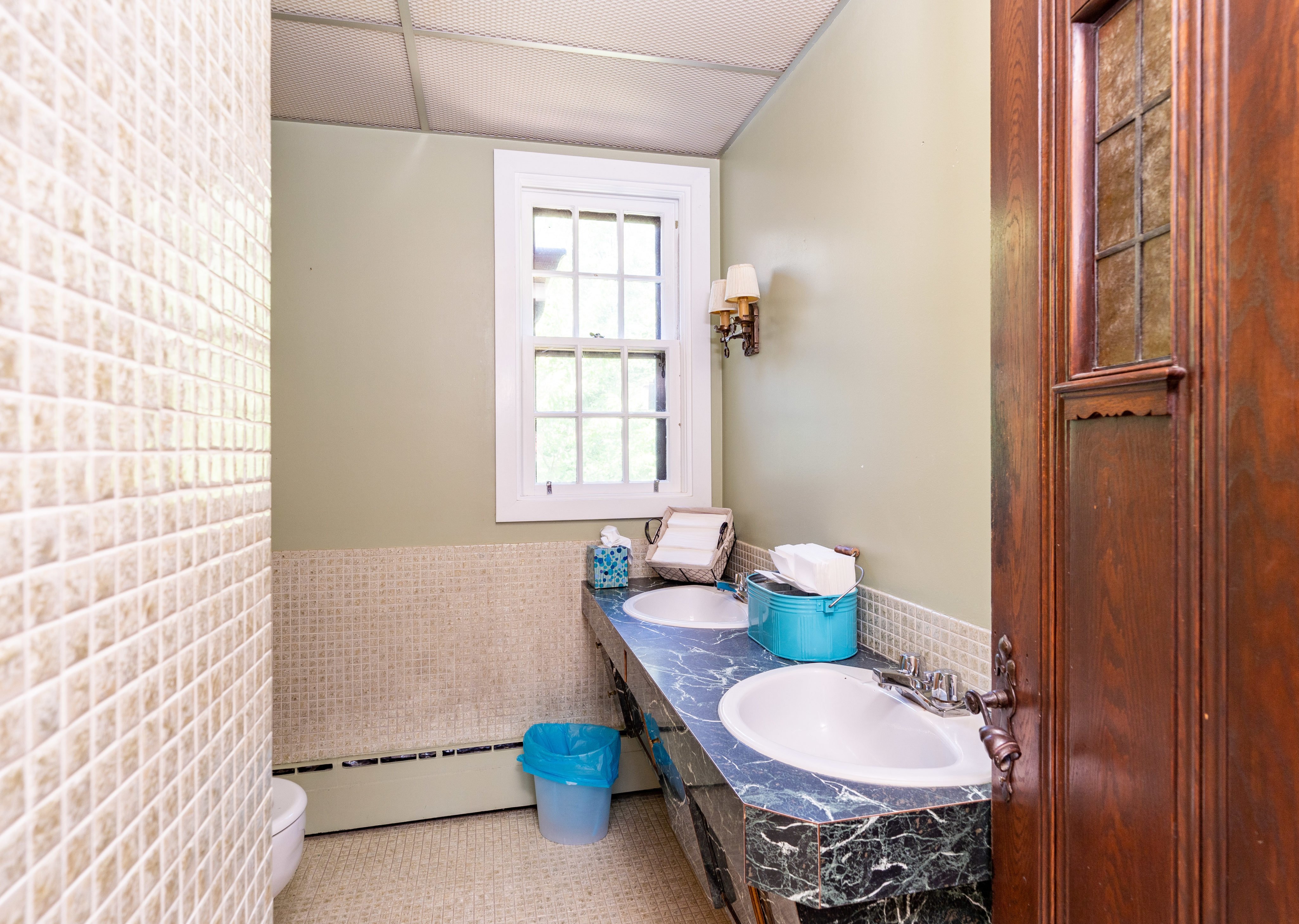 Up on the third floor, yet another bedroom: 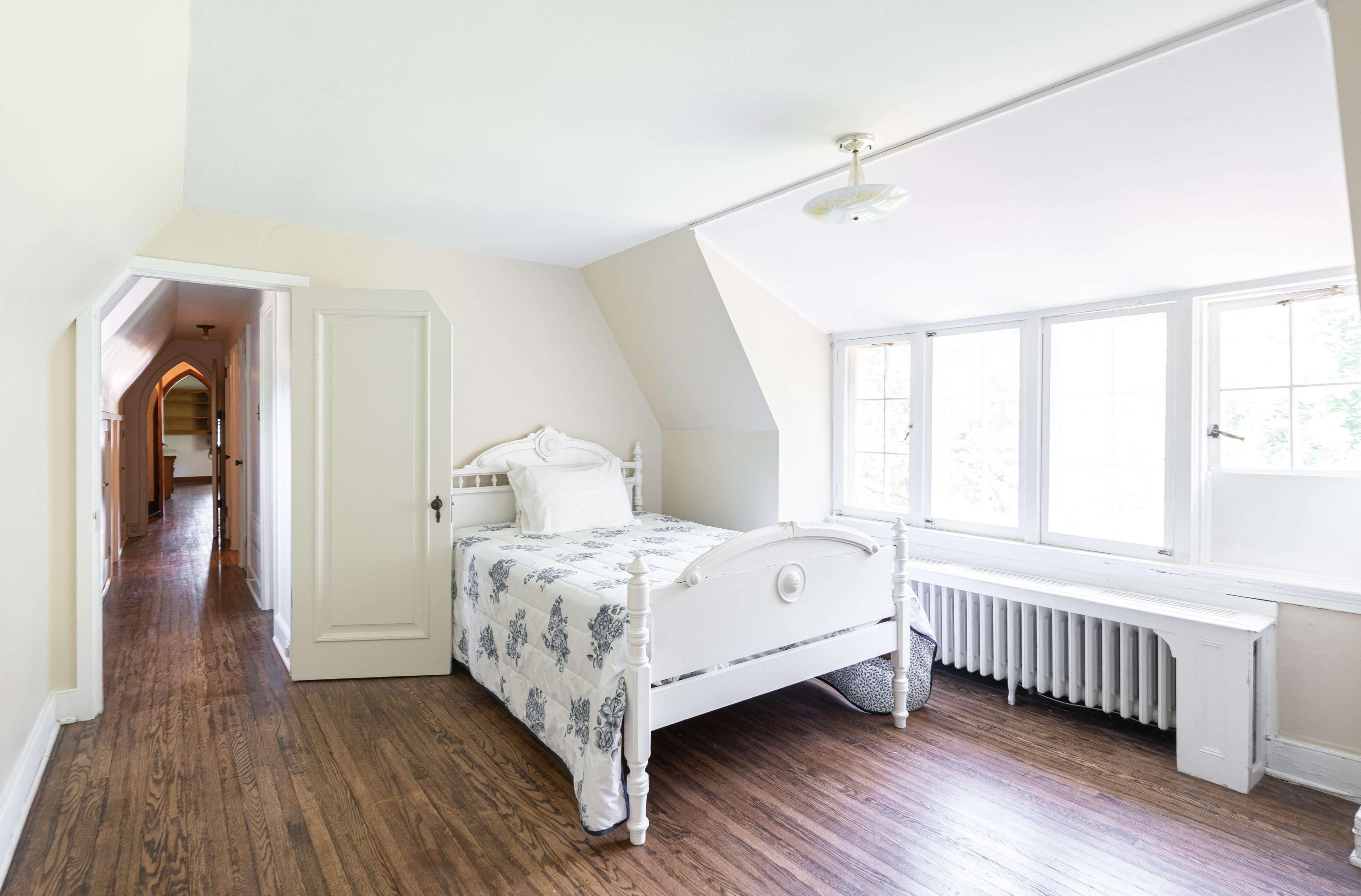 And another, which is decorated with old covers of Time magazine: 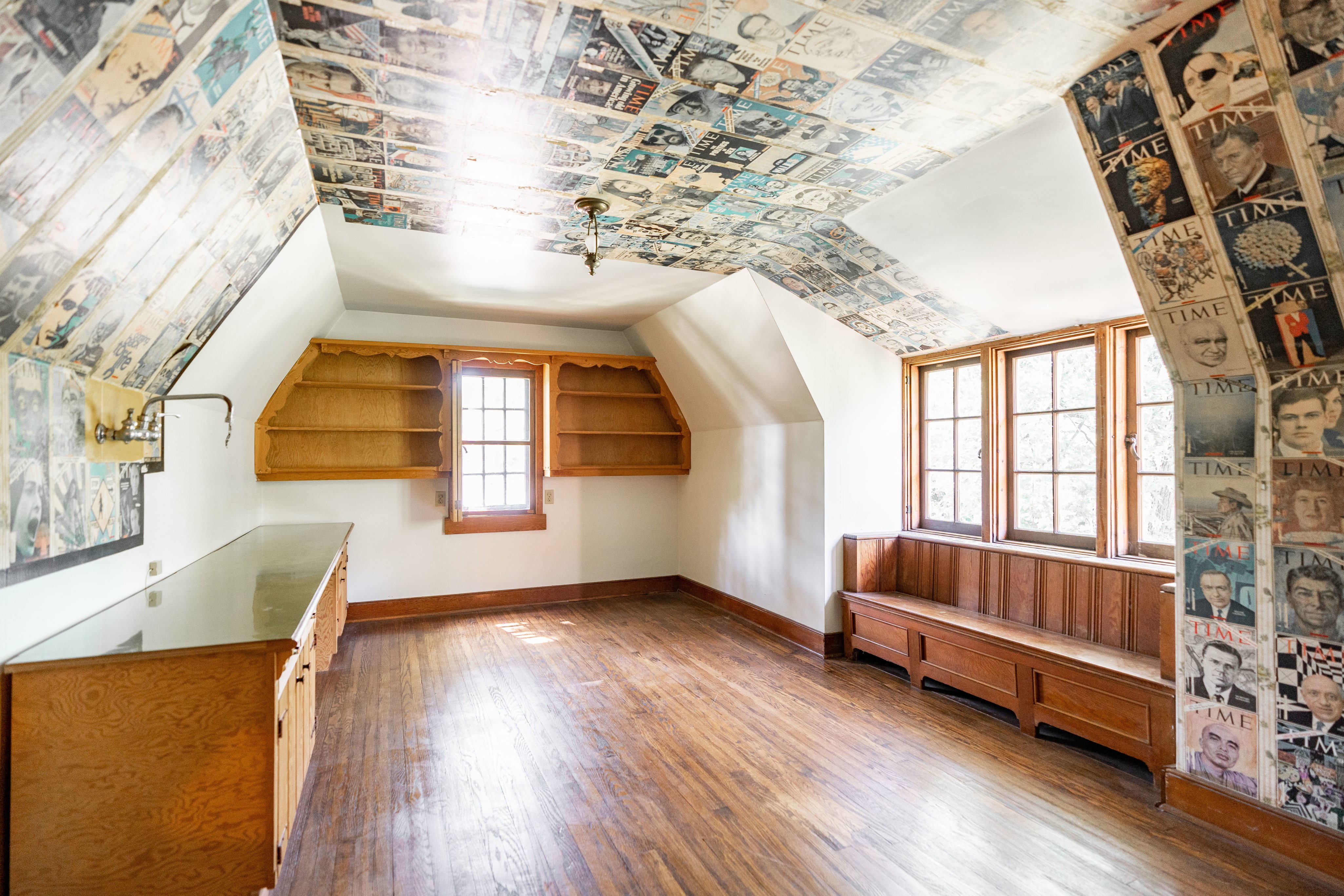 A look at the backyard: 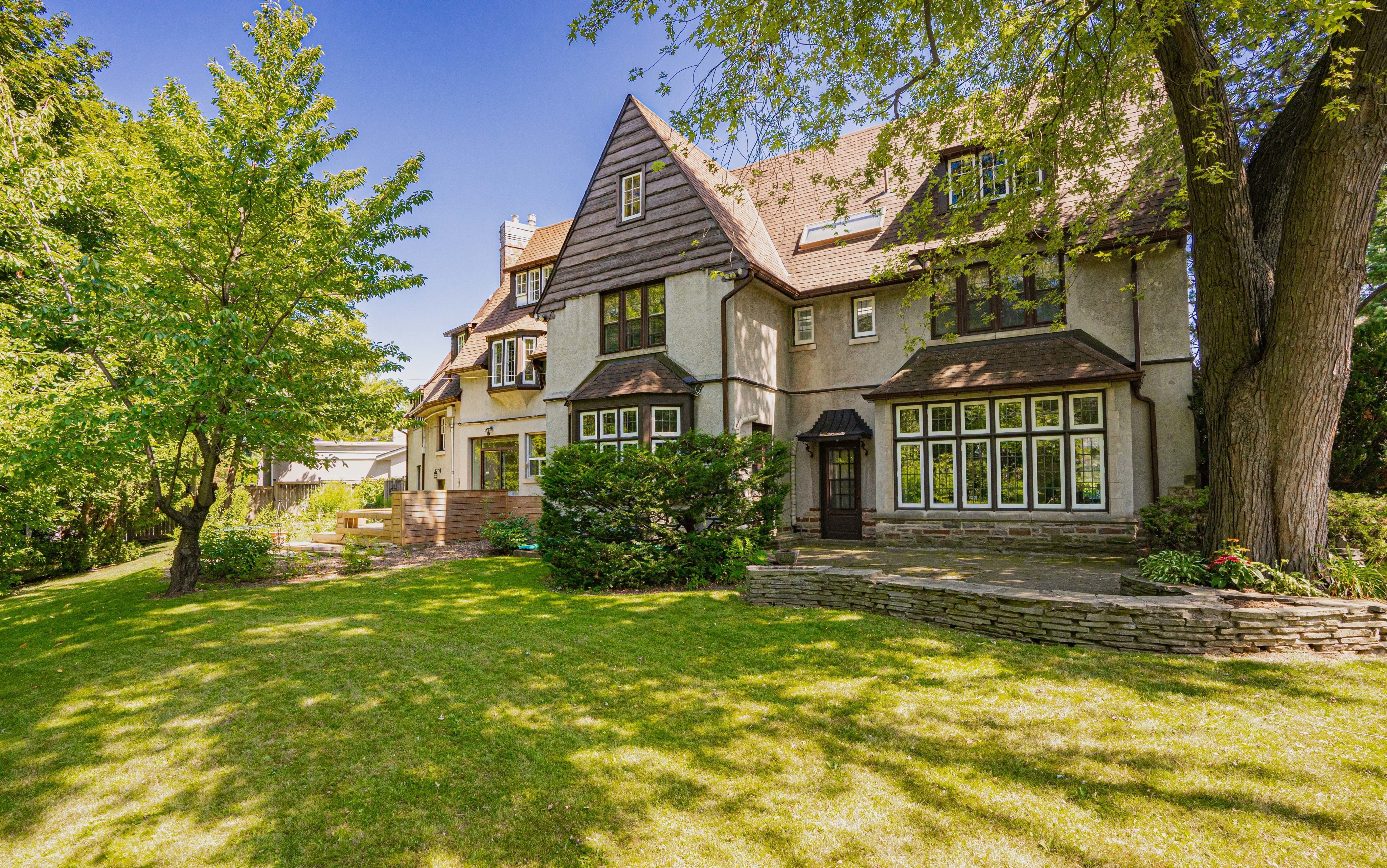 The buyers are a Toronto couple who intend to restore and renovate the home. They even brought an architect along with them for viewings. While the façade of the house is heritage protected, at the back, the buyers intend to build a modern glass extension that stretches toward the ravine.

The home was originally listed in April with a different brokerage, but after more than 90 days on the market, the sellers switched brokerages and relisted the home for roughly $3.6 million. After a couple of months, they dropped the listing price by $600,000 and eventually accepted an offer for $145,000 under asking.