Sale of the Week: $1.7 million for an Annex semi with a fishbowl façade

Sale of the Week: $1.7 million for an Annex semi with a fishbowl façade

A 2,000-square-foot home near Bloor and Spadina. This two-bedroom, two-bathroom semi has a modern façade made from metal and glass.

In 1890, a small worker’s cottage was built on the property. The original home sat back on the lot and, over the years, got overshadowed by houses that were built closer to Brunswick Avenue. In 1993, the sellers bought it for $210,000. They completed major renovations, including the addition of a master bedroom atop the existing kitchen, but left the 350-square-foot basement unfinished. Then, in 2010, the sellers hired Diamond Schmitt Architects to design a front extension that would bring the home in line with its neighbours—something contemporary that wouldn’t outshine the old Victorian homes on the street. That’s how this place got a funky fishbowl façade with corrugated metal siding.

Here’s a look at the front of the house. That garden is framed by a cedar fence and a stone walkway: 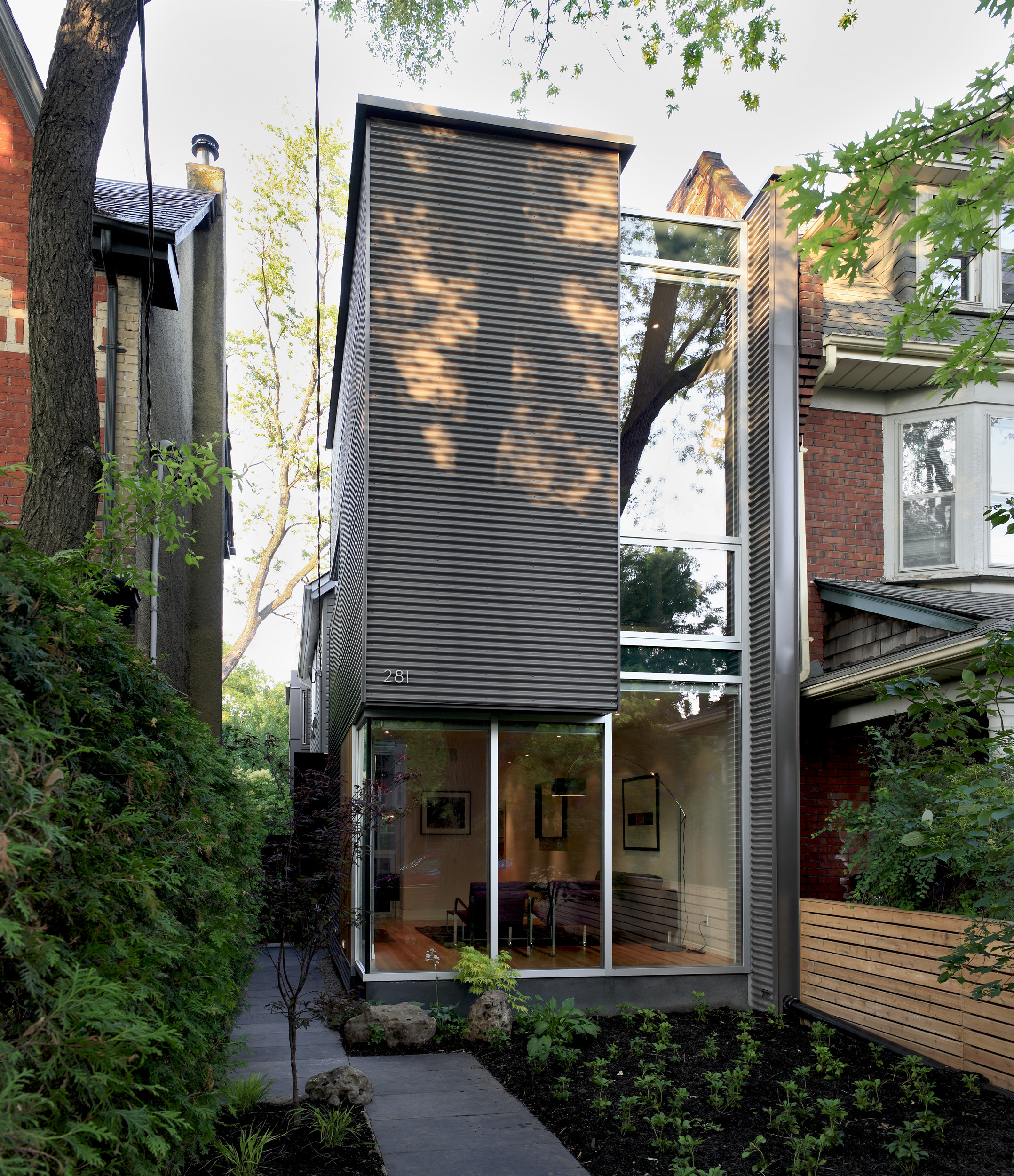 The entryway is at the side of the house, where the extension connects to the original cottage: 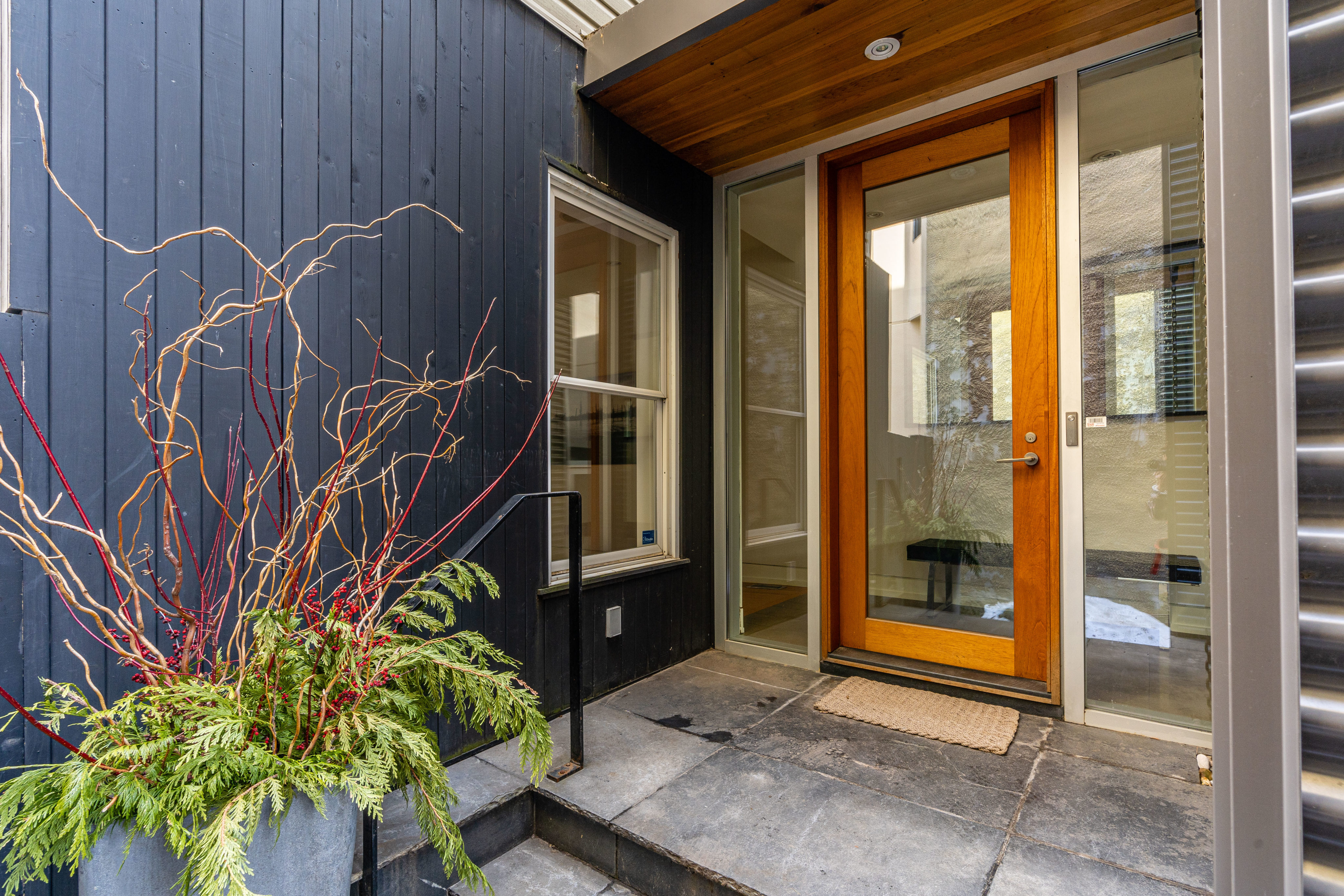 Here’s a view of the extension from inside the front door: 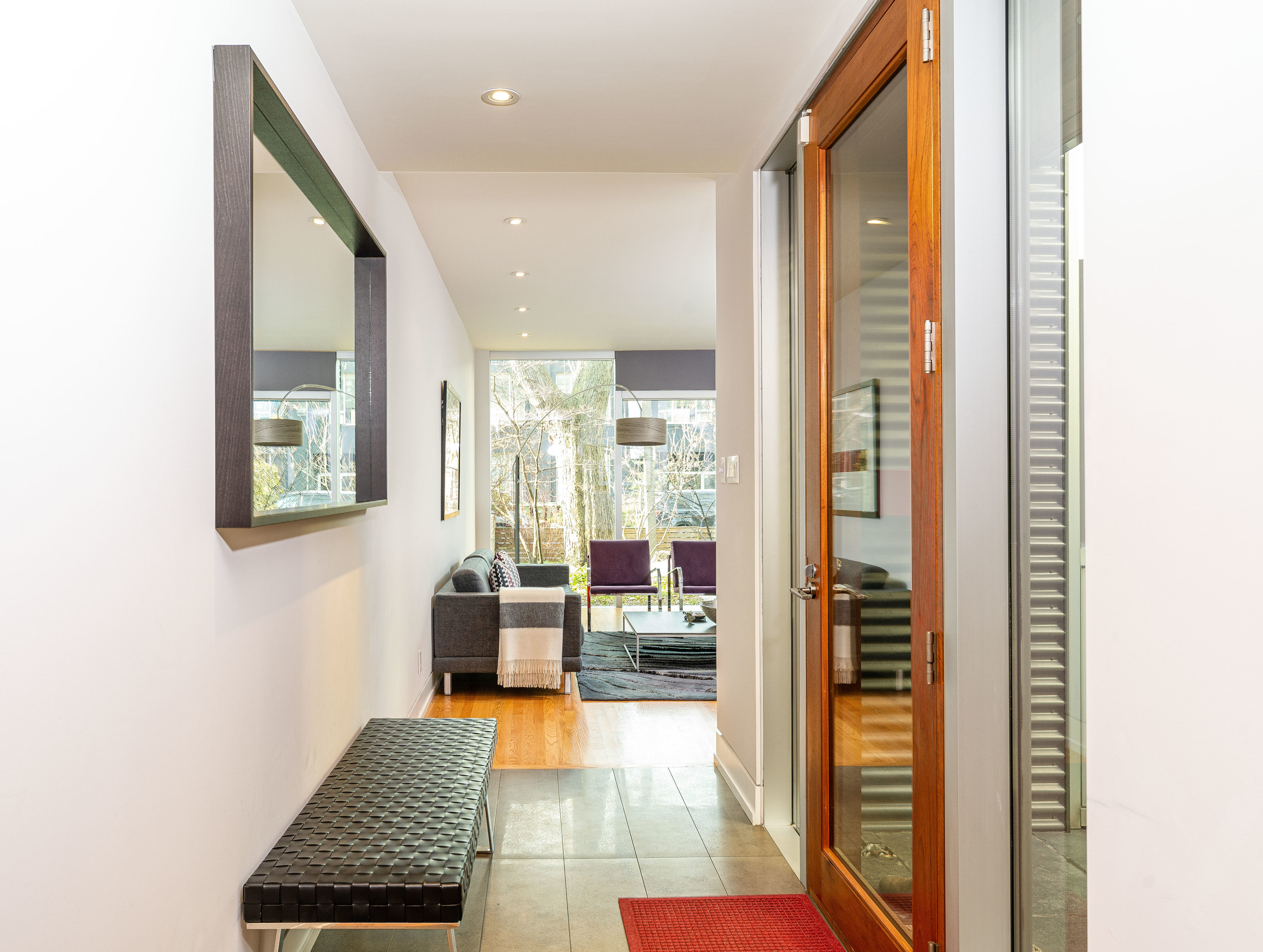 The windows in the 215-square-foot living room provide a view of the front yard: 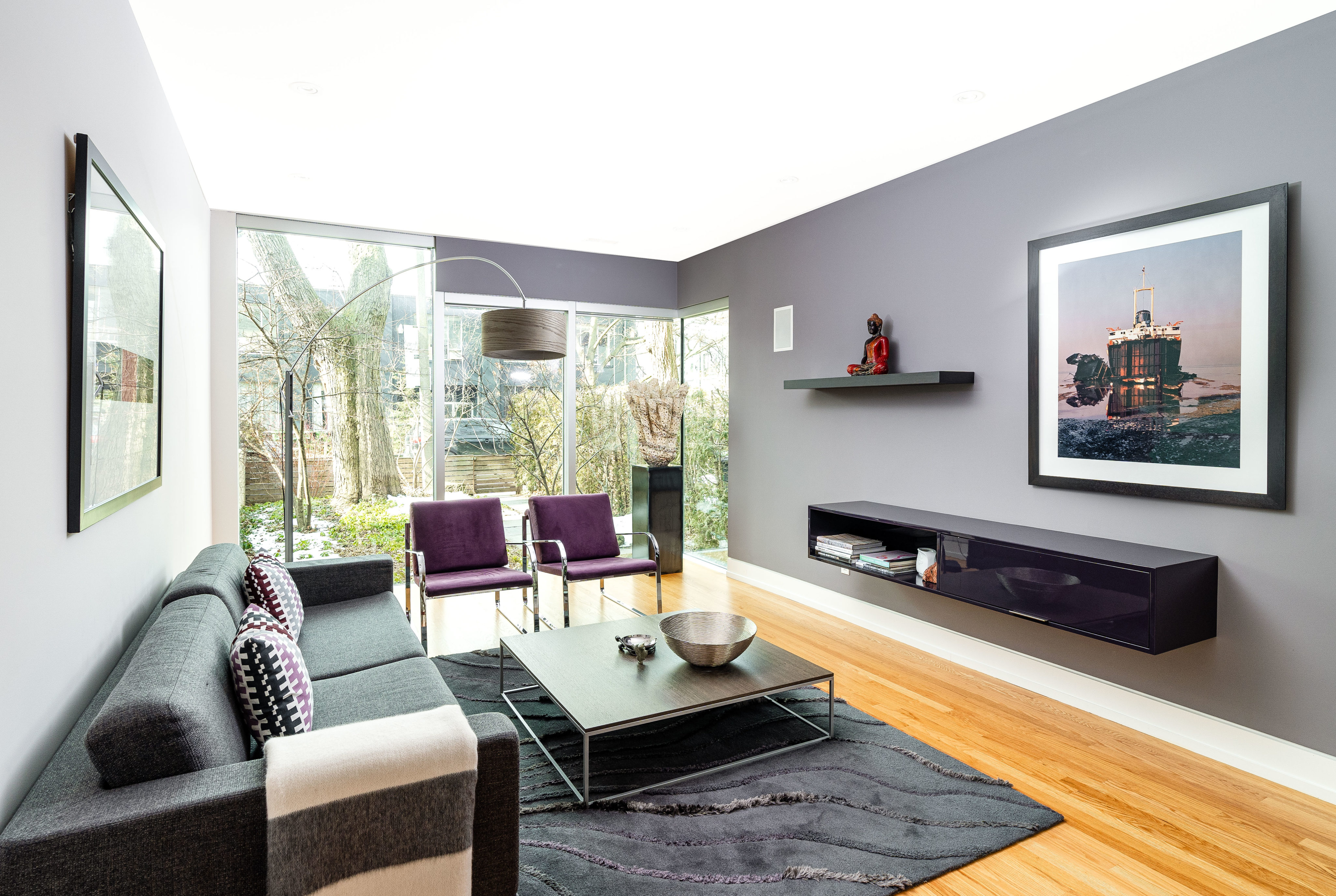 There are nine-foot ceilings and white oak floors in the dining room: 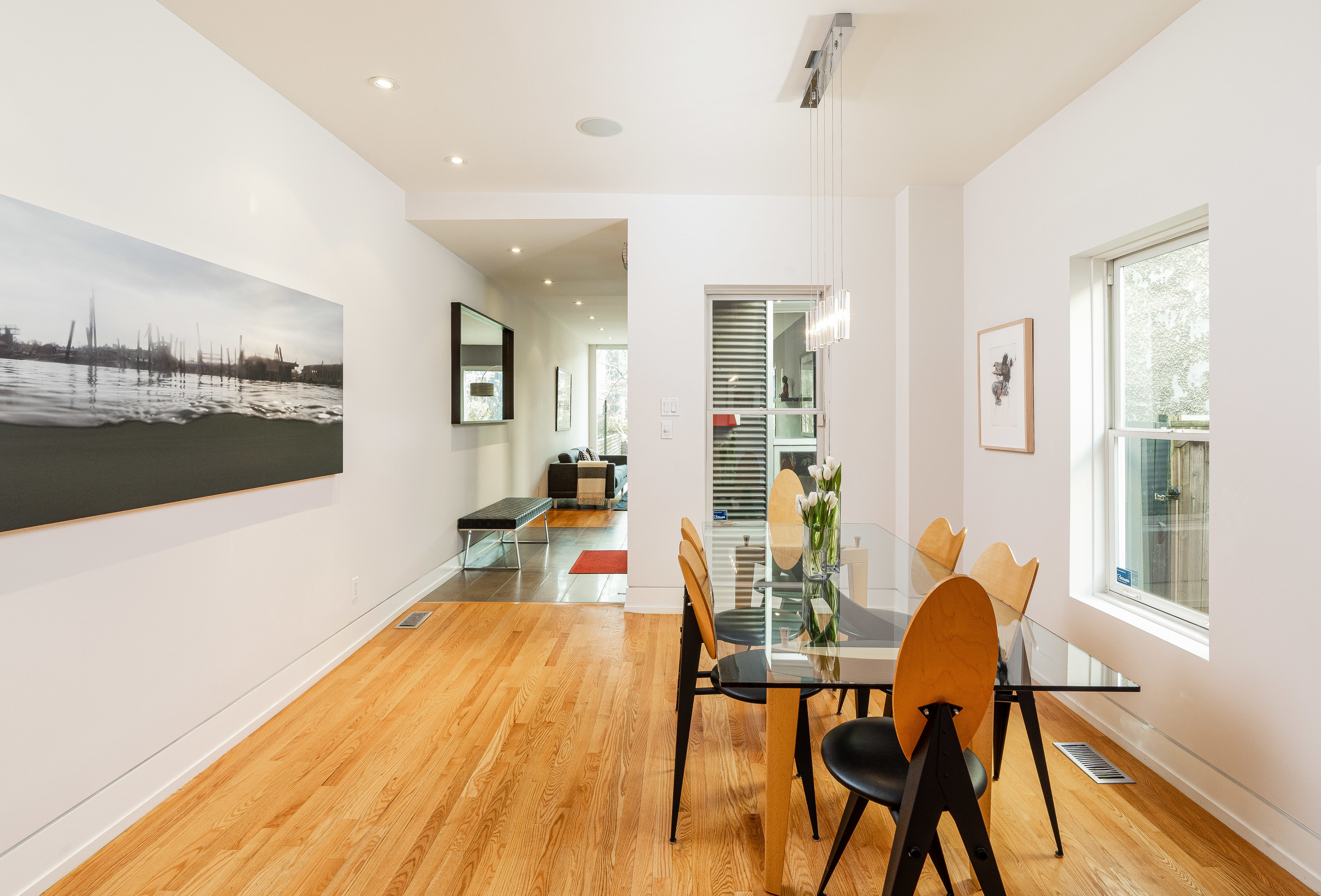 The kitchen has a glass tile backsplash and quartz countertops: 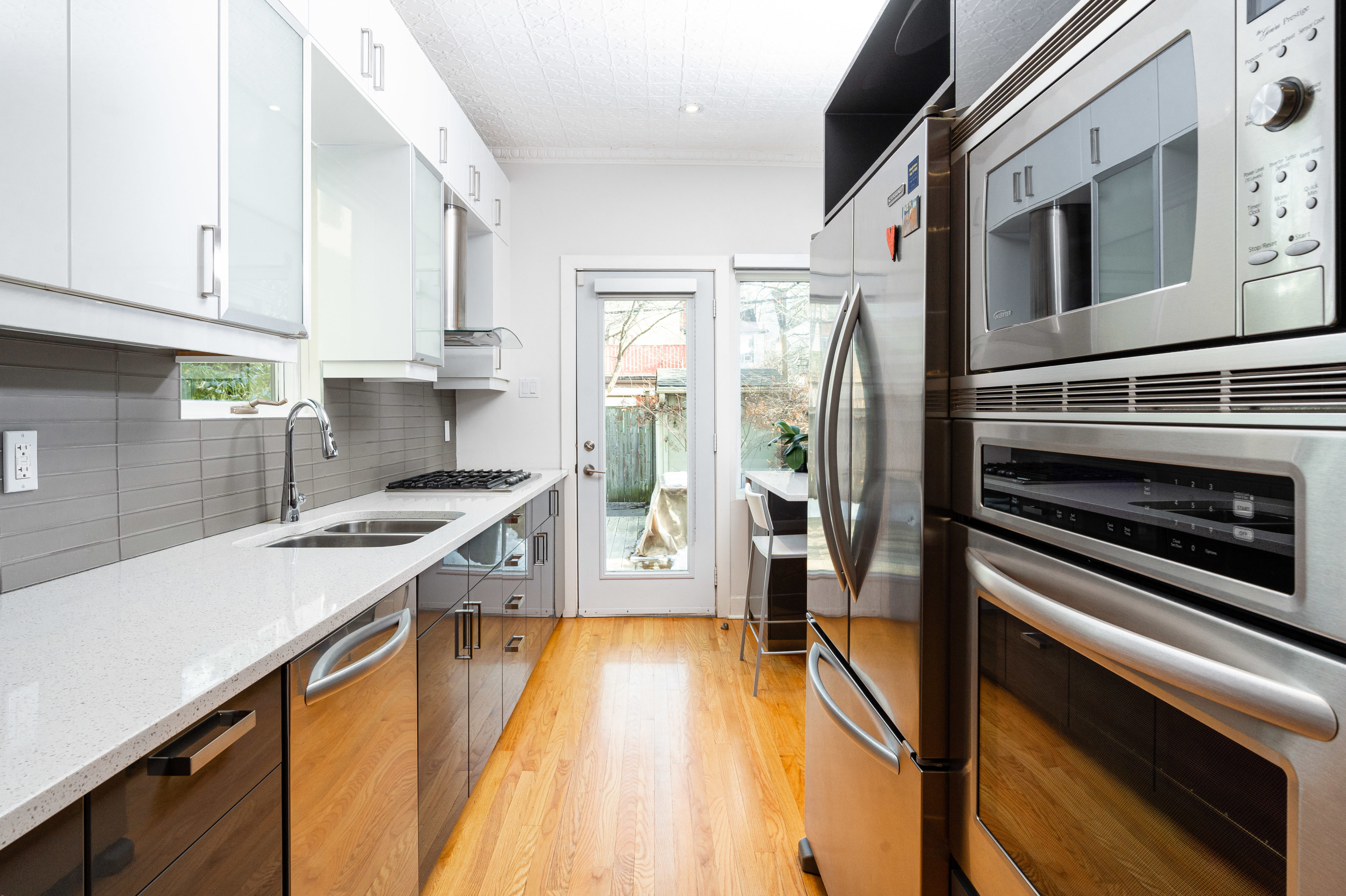 The nine-foot kitchen ceiling is covered in floral tin tiles, which were restored and repainted during a past renovation: 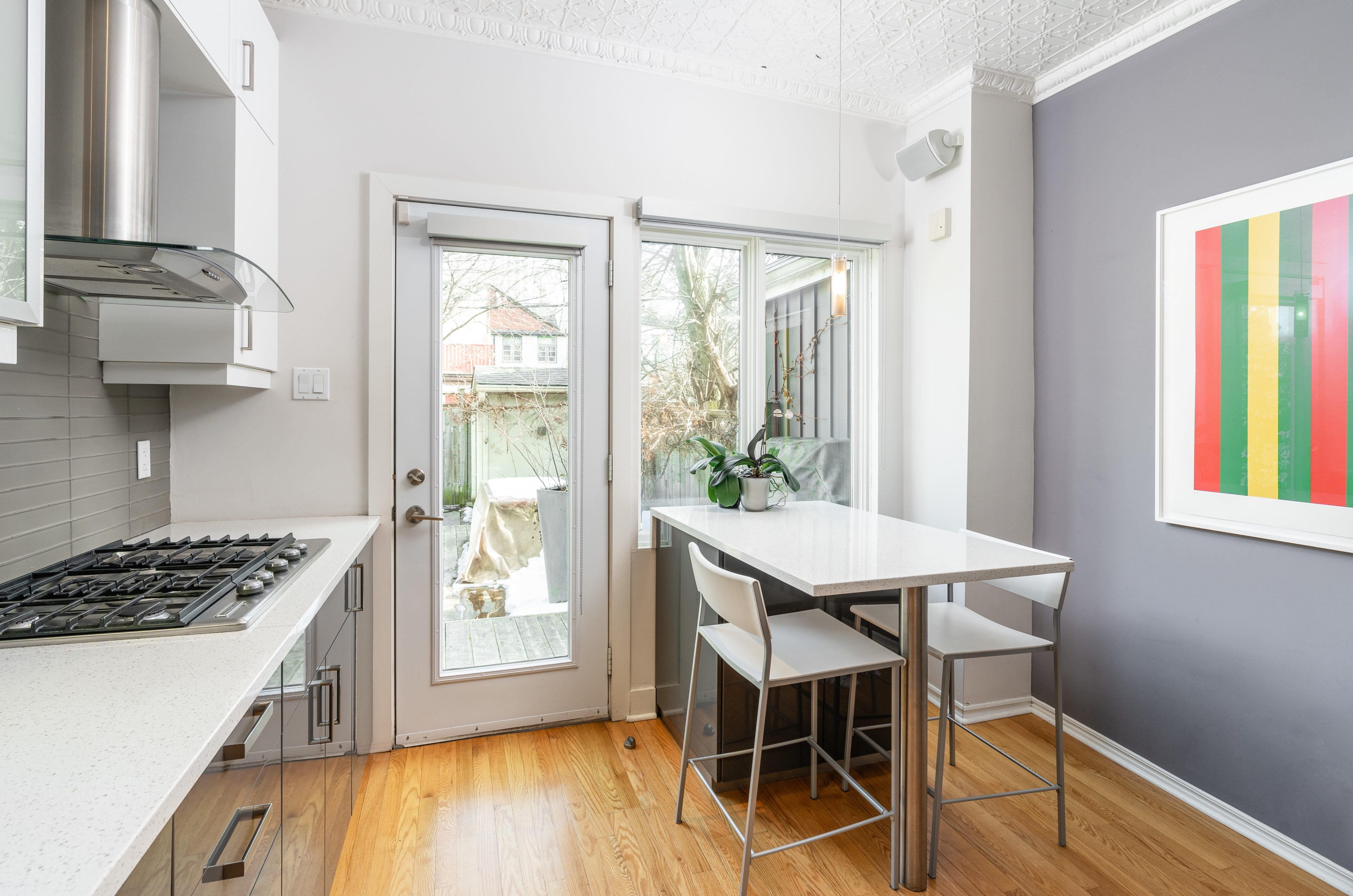 There are acrylic countertops in the main-floor powder room: 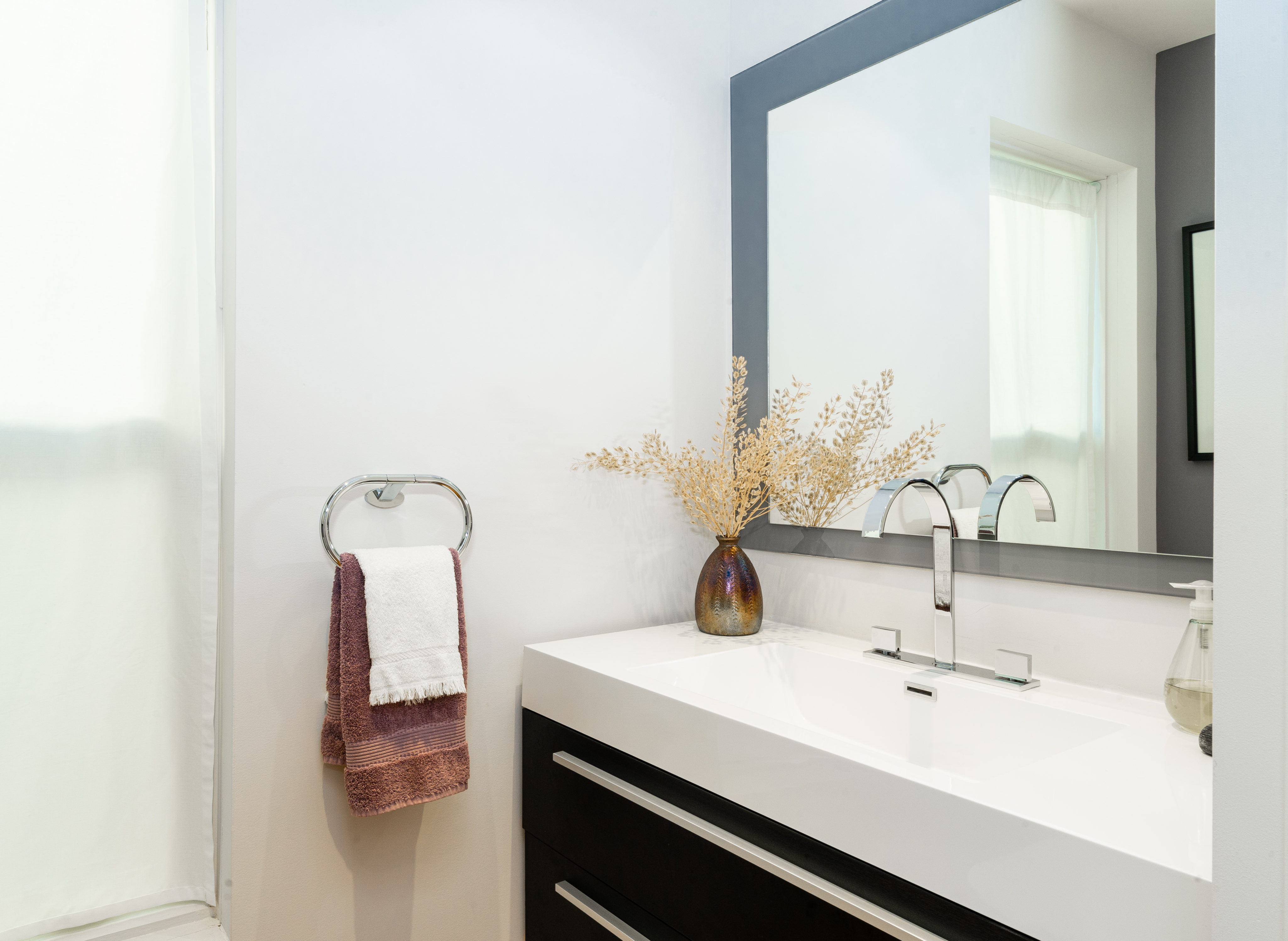 The master bedroom, which was built above the kitchen in 1993, has a 14-foot vaulted ceiling and a rectangular skylight: 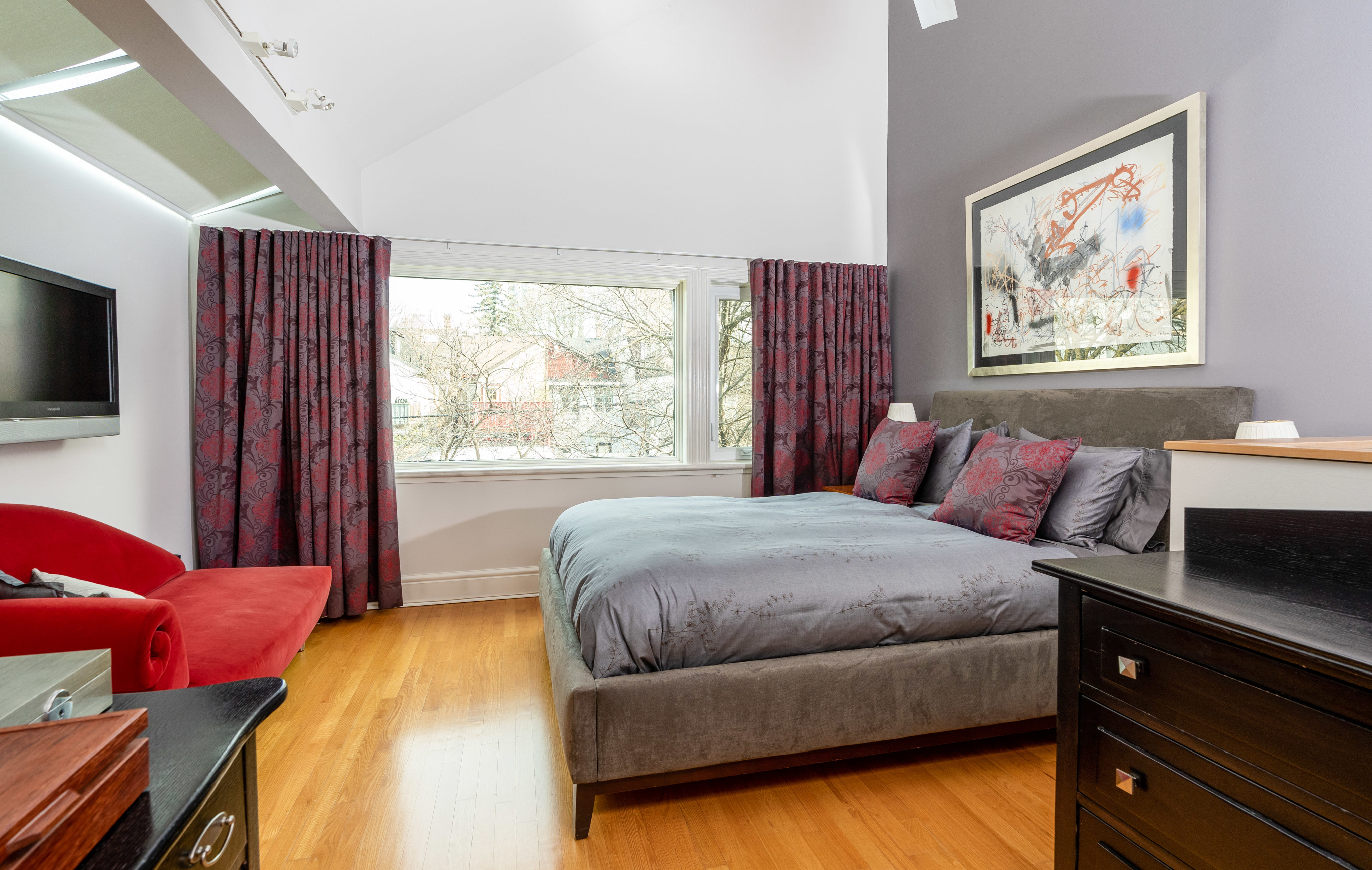 There’s a porcelain-tile shower in the second-floor bathroom: 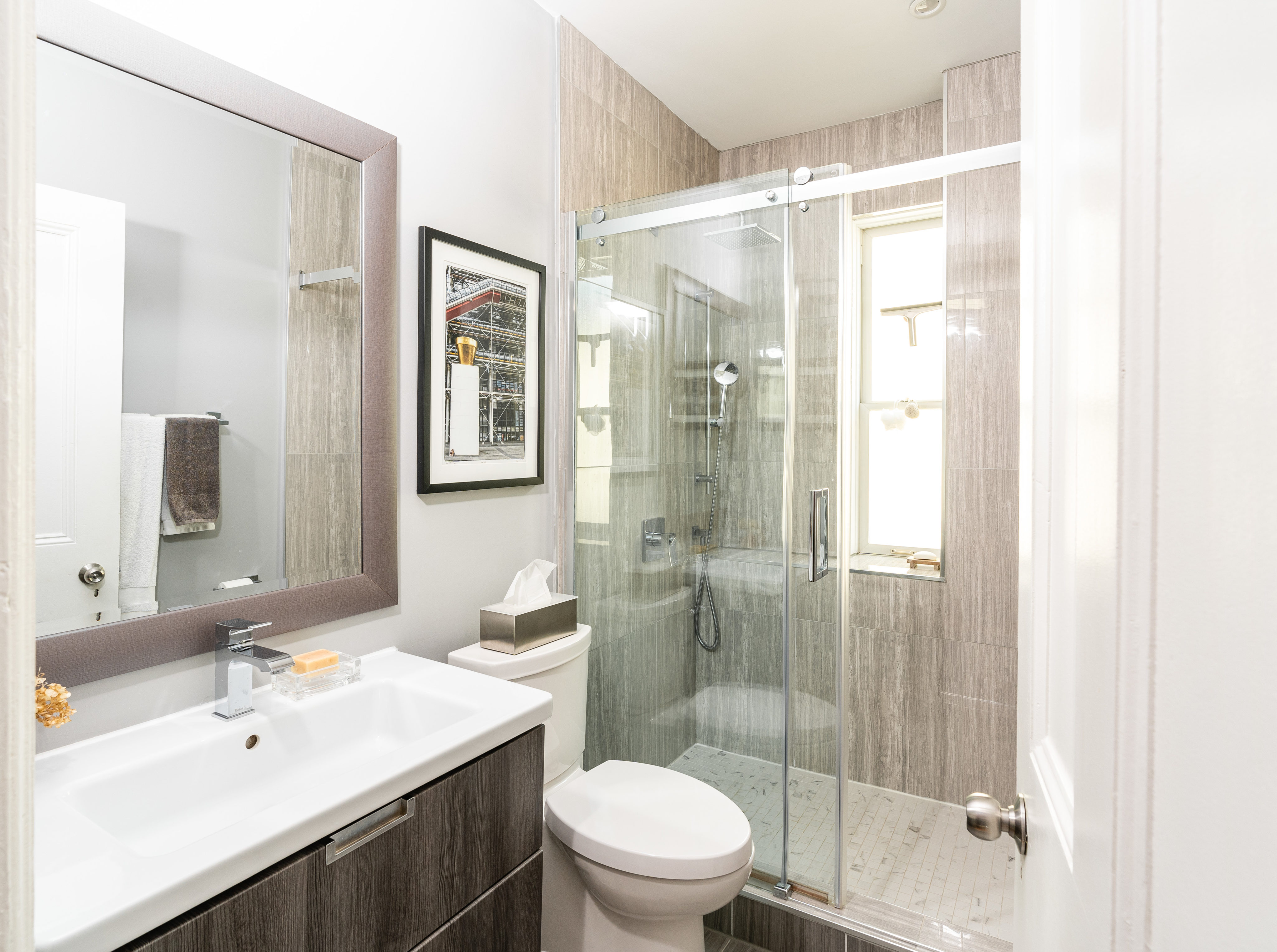 Here’s the 40-square-foot office. That window faces the house next door, and there are laundry machines hidden in the closet: 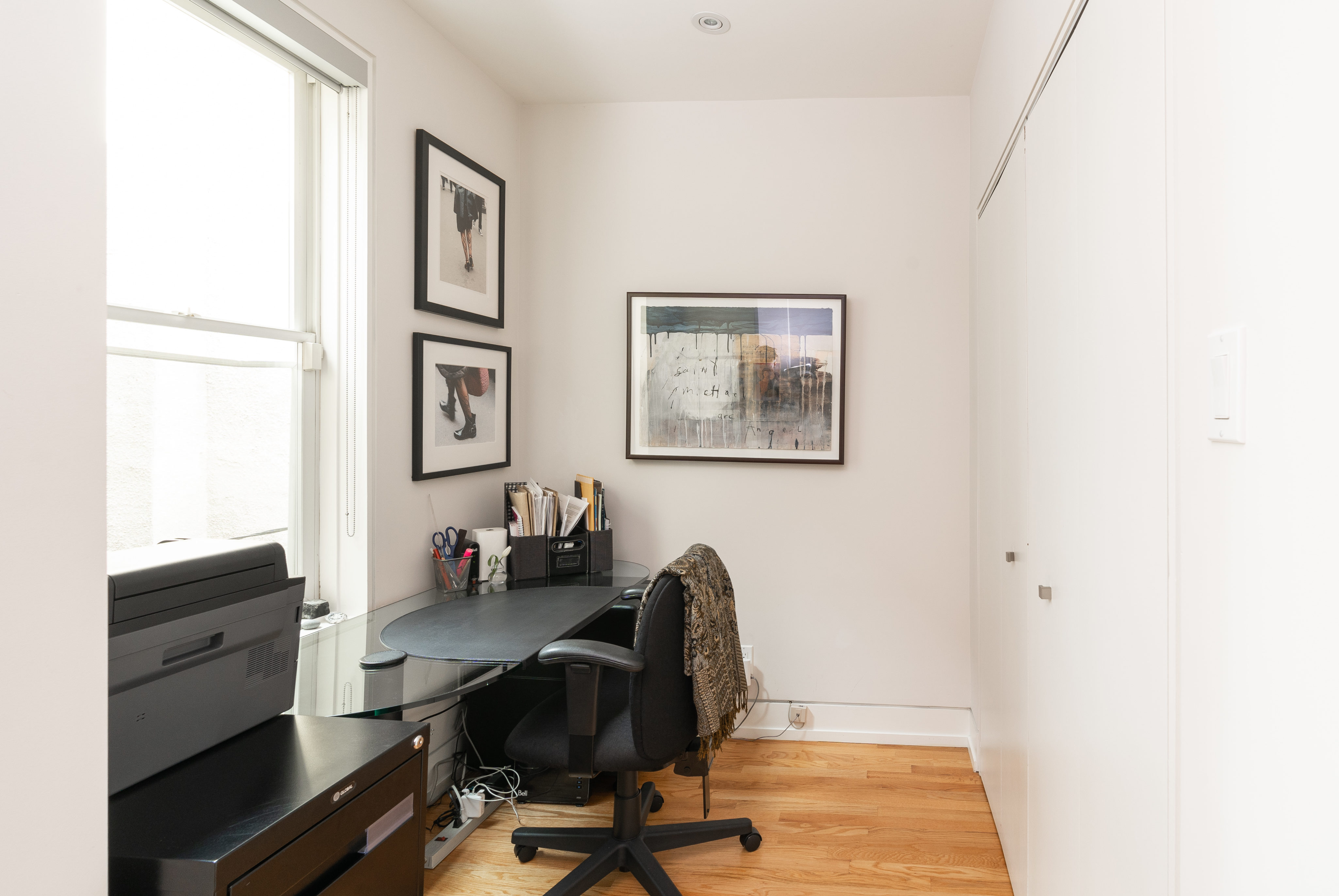 The sellers used the 231-square-foot second bedroom as an additional family room. That floor-to-ceiling window, which overlooks Brunswick Avenue, is nearly 12 feet tall: 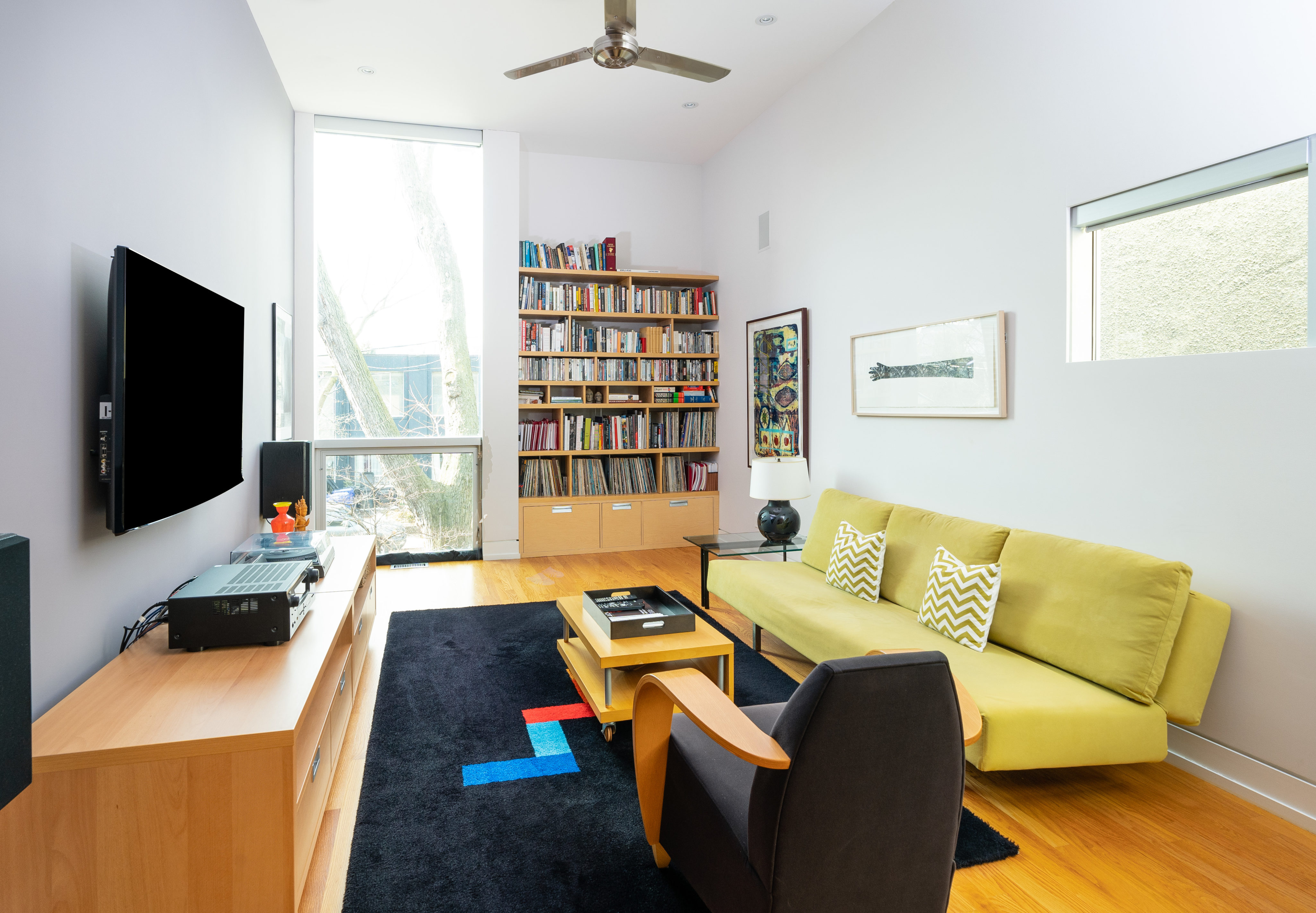 This room also has a sliding door: 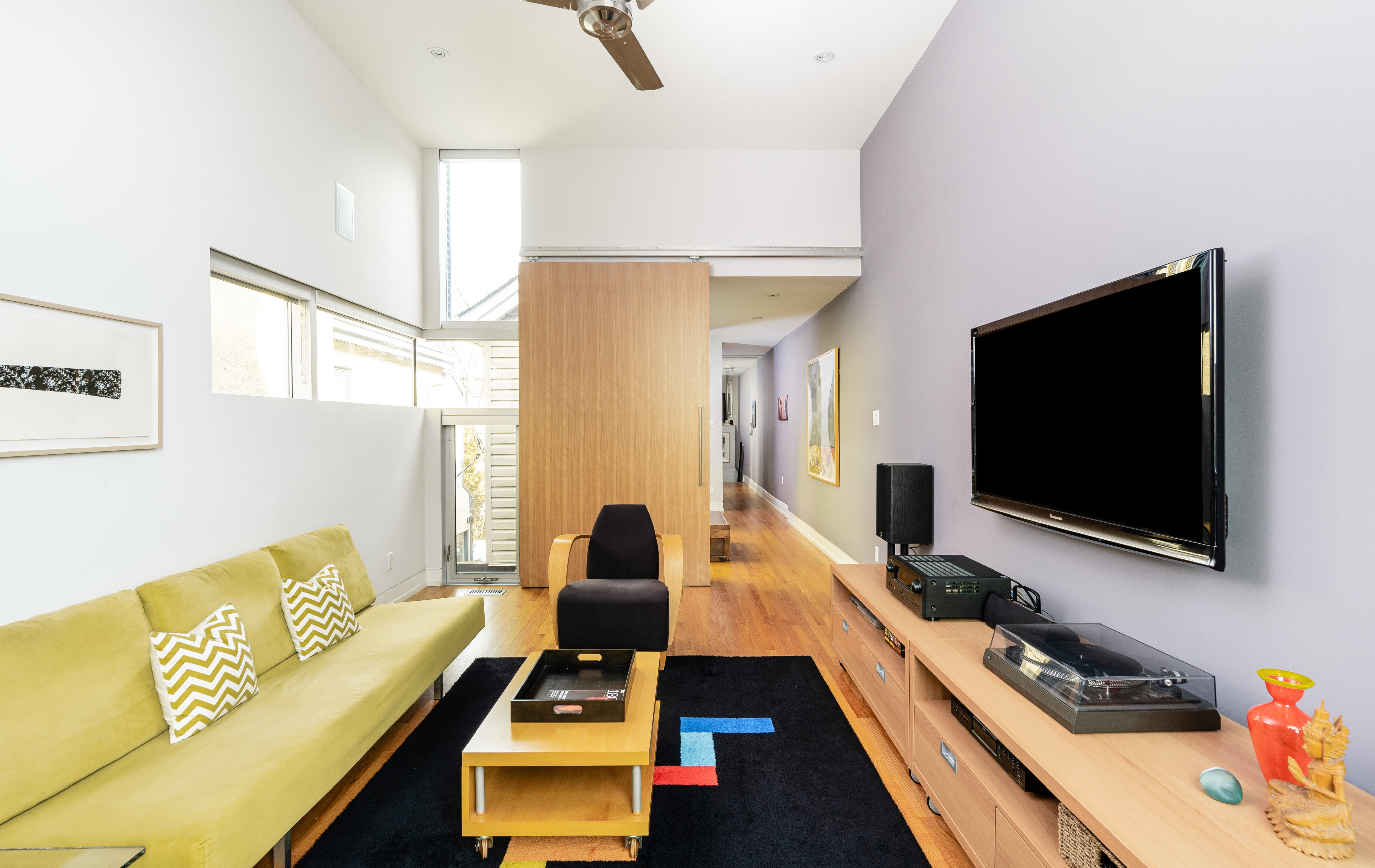 The back deck is nearly 340 square feet. That grey cube is the master bedroom: 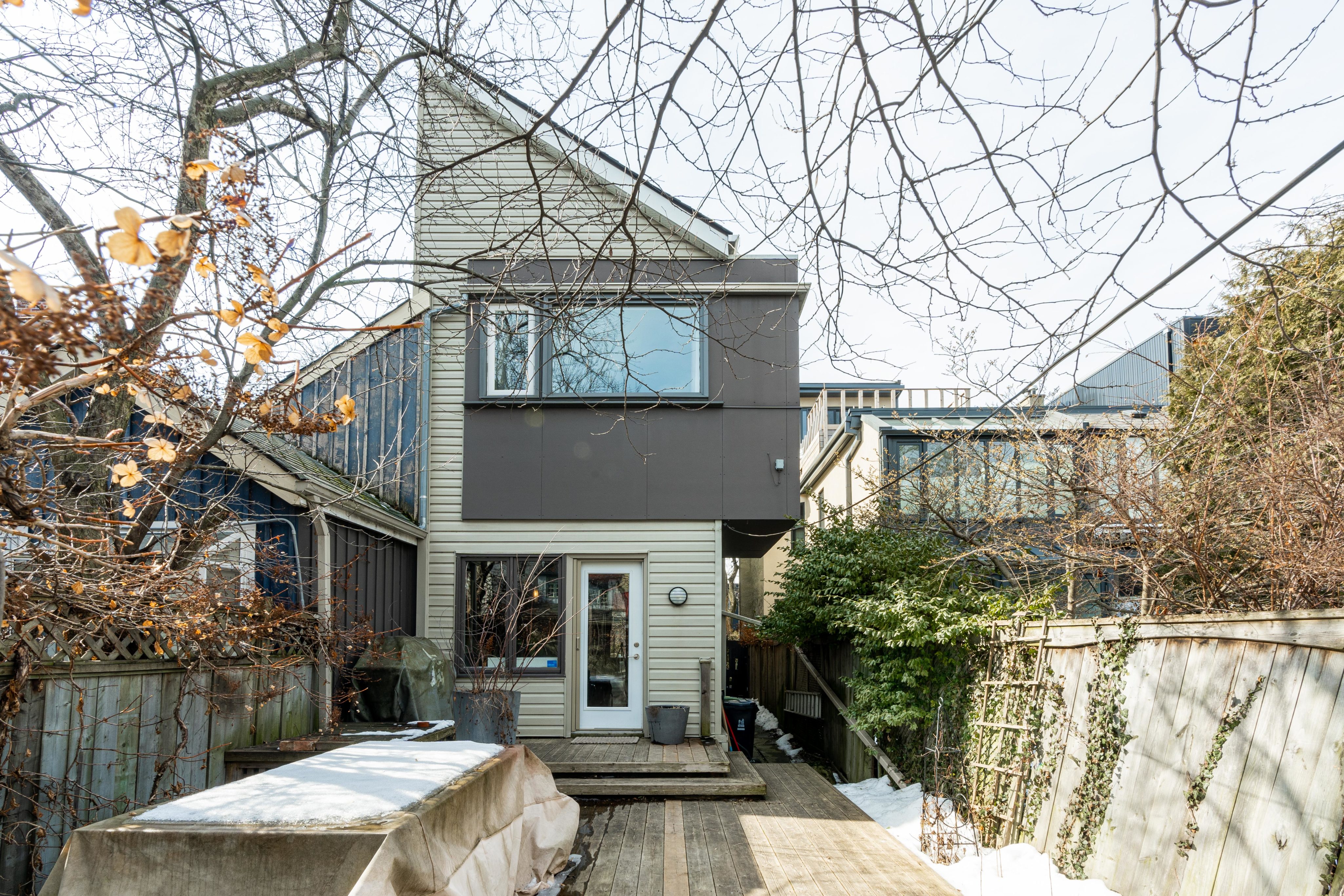 After living on Brunswick Avenue for 27 years, the sellers, both lawyers, wanted to downsize to a condo. On March 3, they listed the house for $1,795,000. At that point, Covid-19 had yet to be declared a pandemic and there were fewer than two dozen confirmed cases in Ontario. The sellers booked 23 showings, but many of the potential buyers expressed concerns about the cost of finishing the basement, which had dirt floors and six-foot ceilings, and still needed to be excavated. They were unable to drum up any offers—then the pandemic escalated and the housing market slowed considerably. On March 21, the major real estate boards urged realtors to stop hosting open houses. Two days later, on March 23, the sellers terminated the listing. Since they had yet to purchase their new condo, they could afford the delay, so they decided to wait until the market picked up again.

But in early May, their agents got a call from another realtor who said their client, a young couple, was interested in the home. So, the sellers decided to bring it back on the market. This time, they lowered the listing price to account for the approximately $150,000 it would cost to finish the basement. Market conditions during the pandemic played no part in their decision to drop the price, according to the realtor. “Zero, zilch, nada,” he said.

On May 11, they listed the home for $1,650,000. The sale came together quickly. That day, they hosted three separate in-person showings, including the young couple who had convinced the sellers to put the house back on the market. Before visiting the property, the buyers had to fill out a questionnaire to indicate they were symptom-free and hadn’t traveled recently. They were also discouraged from touching anything in the home. The sellers’ agent left the lights on, opened the doors and left hand sanitizer at the entrance along with disposable gloves and masks. Hours later, the sellers received two offers. After a brief bidding war, the young couple got the place for $1,670,00, with a closing date in late August. In the meantime, they’ve already begun plans to finish the basement. Apparently, the sellers are hunting for a downtown condo.